abdo123 said:
is it me or for 220$ this is a bargain? you get a warranty and similar performance to DIY Class D at this price range. The only devestating fault is the gain difference between channels, but again i doubt it's audible if it's below 1 dB.
Click to expand...
You don't even have to DIY very much to get better SINAD and (at least) equivalent power with the Aiyima A07 Amir recently reviewed and a beefy enough SMPS -- for less than half the price!
W

Hello Amir, did you make a listening test with this amp? Can you hear any of the PS noise?
R

GGroch said:
...Is this connection any different from the sub out of a Loxjie A30 or any other stereo amp in this regard?
Click to expand...
I never said it was (for more see post below). Yes phase shift can be the solution, as long as your sub has it. The optimum would be an amp with its own "logic" and room correction system, a few such exist. That said, if I would set up a stereo system "from scratch", I would go a) active b) nearfield and c) having fought my own "sub vs. room wars", probably without a sub.
Last edited: Feb 23, 2021
R

dogtagkz said:
Thanks, man. I would assume a dedicate output for a sub like the Loxjie A30 would be a better option.
Click to expand...
In search for a really better option, I would rather look at something like this https://www.audiosciencereview.com/...ds/yamaha-r-n803-smart-receiver-review.13830/ admittedly far more expensive, but you get more for the money, too. With amps, it tends to be like with cars, you'll rarely learn why the expensive one was expensive, but you'll probably learn why the cheap one was cheap.
Last edited: Feb 23, 2021
C

Bruce Morgen said:
You don't even have to DIY very much to get better SINAD and (at least) equivalent power with the Aiyima A07 Amir recently reviewed and a beefy enough SMPS -- for less than half the price!
Click to expand...
Yes, that's why I posted its measurement.

Thanks for the review Amir. Here you get a toroidal transformer and chassis that both look cool, a novel HP output, and ordinary performance with not much power. The price seems about right, but I certainly won't be getting one with the Loxjie A30 being such a bargain with a better feature set for my needs. I won't be recommending it to anyone either, especially with the mediocre to amateurish implementation.
Last edited: Feb 23, 2021

Matias said:
For 200 usd I would rather get an ICEpower 125ASX2 based little integrated. Its has a little better SINAD and 120W in 4 ohms.
https://www.aliexpress.com/item/4000167763499.html
Click to expand...
There are lots of better options. If the unusual headphone output and chassis are not worth $100 to you then this is an easy one to pass on.
C

wus said:
Hello Amir, did you make a listening test with this amp? Can you hear any of the PS noise?
Click to expand...
I would think -80 dB at 300 Hz 5 W is audible if you go near the midwoofer, but not a significant problem (depending on sensitivity of the speaker). I am more curious about those intermodulation products in the -85 to -90 dB range, if that's what they are. There seems to be a 1060 Hz signal but no 940 Hz.

Tks said:
When I see both sides of the fundamental riddled with spikes Vlad the Impaler would consider excessive...

I predict the headphone output will be worse than the speaker output. The lines for it wrap around that transformer. There's going to be some induction there.

Vini darko said:
I predict the headphone output will be worse than the speaker output. The lines for it wrap around that transformer. There's going to be some induction there.
Click to expand...
I am sure objective performance is poor. It is the only way objective performance can differentiate it from all the instrument grade stuff on the market.
T 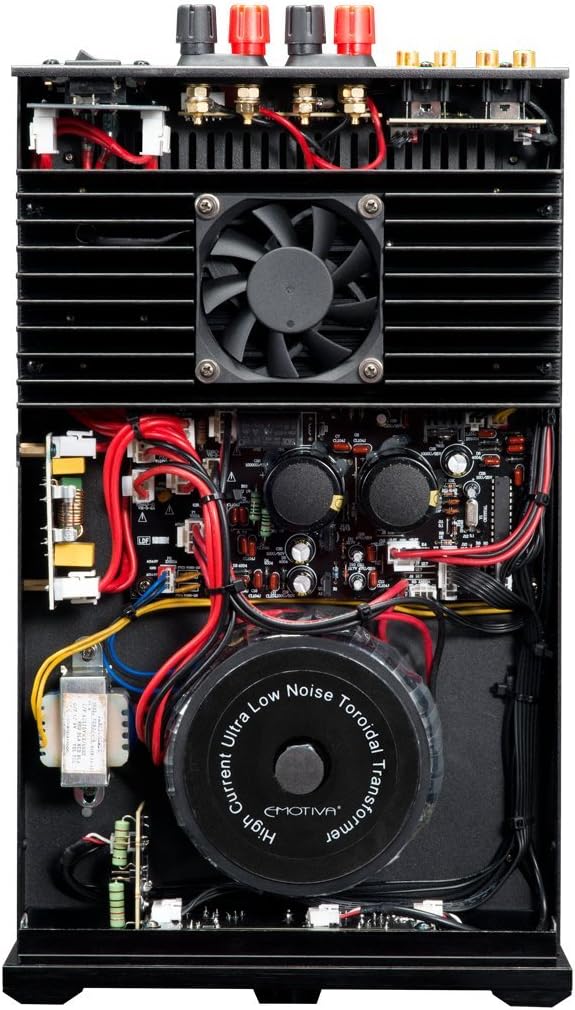 respice finem said:
With amps, it tends to be like with cars, you'll rarely learn why the expensive one was expensive, but you'll probably learn why the cheap one was cheap.
Click to expand...
This is true for a lot of things ....but cars are probably the worst possible example, right? At least in recent decades.

A Corolla's going to run for a quarter of a million miles even if you treat it like a rented mule! Meanwhile, a modern luxury car tends to be a maintenance nightmare...

Also, hasn't ASR shown that price != performance for amps and other audio gear as well, hundreds of times over!??
Last edited: Feb 23, 2021

I've enjoyed mine. I would think that perhaps aside from the slight channel imbalance, the measured shortfalls would fall well below audibility and the end result would be "transparent enough" for most. Of course, I'd rather have a Benchmark AHB2.
I own the older version sans headphone jack. AFAIK there's no difference between the two besides the jack.

While I enjoy my slightly dodgy chip amps... the Emotiva also never makes me wonder if it's going to burn my house down, so that's worth something.

amirm said:
There is a fan on top but I did not hear it come on. The unit does get quite warm though so allow ample cooling/space above it.
Click to expand...
When this was my every day amp, I never felt the amp was much more than perhaps ~20F above room temp. Of course, it was a small room, so I'm sure I wasn't pushing it as hard. But there were times I did push it rather hard and didn't feel much heat...

Last I checked, nobody has ever heard the fan activate on one of these units. I'm sure somebody can dig up a counterexample, but when I was shopping for amps and obsessively reading reviews everybody who tested this thing mentioned never being able to make the fan activate since the unit stayed quite cool. My impression is that the fan was sort of a failsafe in case people crammed this thing into a rack with near-zero ventilation.

So we have yet another example of our fearless leader pushing things harder than most.

respice finem said:
If you have a passive sub with hi-pass sat speaker outs (rare these days), quite simply to the speaker outputs of the amp, and the sat speakers to the sub's sat outs. An active sub can be connected (depending on its design) with either a Y-cable or L+R RCA to the RCA output. Having an active sub and passive sat speakers, you will get some delay on the sub side. That said, I wouldn't be getting this one
Click to expand...
Are you saying folks could connect their active sub to the RCA outputs on the A-100?

If so, that's not quite correct for most people. Those RCA outputs are fixed volume.

Of course, it can work if you're willing to do volume control upstream, but probably not what most people would be looking for.
Last edited: Feb 23, 2021
D

I always remember seeing these Emotiva amps through the years, always had impressive outert case, and an awesome looking big toroidal transformer. Todays competition has come a long way though. I would definitely be curious to see how one of their top of the line two channel amps performs.

Interesting that the original version the Mini-X (no headphone jack) came out about 10 yrs ago, 2011 or 2012 at $220, so definitely surprised to see they've kept the price so close.
B

This unit is my "adequate for now" amplifier and FM tuner (which is very retro).
Y

This is basically why I don't wanna step into passives myself or advise others to do so... when chip amp modules used in actives achieving something as great as the Genelec 80X0s or Neumann KH80/120 level of performance at mid price, and budget amp this varies in performance which is mostly poor, and the fact that good passives cost more than good actives...

One thing puzzles me though, it seems for passives, even similar ported design with similar woofer size, it seems bass extension is usually worse than actives? any reason behind that? I mean say 5" 2way actives normally have -3db point around 55hz, even good passives like Revel or Focal ones from memory roll off bass around 100hz already and -3db @~70-80hz?

respice finem said:
In search for a really better option, I would rather look at something like this https://www.audiosciencereview.com/...ds/yamaha-r-n803-smart-receiver-review.13830/ admittedly far more expensive, but you get more for the money, too. With amps, it tends to be like with cars, you'll rarely learn why the expensive one was expensive, but you'll probably learn why the cheap one was cheap.
Click to expand...
Buying something more expensive once can, in the long run, be cheaper than buying something cheap more often.

My issues with this amp is while it may not be bad for the price, it isn't the "bargain giant killer" that it is often referred to as being.
The rave reviews some amps in this price range receive makes it sound like they are incredible deals where you get so much more than you pay for, because of something brilliant the company is doing: "Emotiva asked a simple question: "Why can't we have amazing audio and video sound at a price that don't threaten our mortgage?" Emotiva is comprised of true audio enthusiasts, engineers, and product specialists. We run a lean organization without excess overhead and redundant levels of management. Our people are passionate enthusiasts who enjoy the experience of using Emotiva products equally as much as designing and building them."
I guess they wouldn't sell as much if they said "why can't we have okay products at a reasonable price?"

On a side note, with that quote from their site shouldn't the "don't" be a "doesn't" since it is referring back to the singular "price" not the plural "audio and video". I'm terrible with grammar so I may be wrong and it could be one of those things that sounds wrong but is correct.
Last edited: Feb 23, 2021
You must log in or register to reply here.
Share: Facebook Google+ Reddit Pinterest Tumblr WhatsApp Email Link