This is a review and detailed measurements of Onkyo M-282 Power (speaker) amplifier. It is on kind loan from a member who bought it a few years ago but had not used it. Seems like it was just discontinued as I checked the price yesterday and it was being sold for $300 or so from Amazon. The suggested replacement by Amazon is lower power (75 versus 100 watts for M-282) but is also cheaper at $210.

The box is quite large but other than the left side that is weighted down by a transformer, it feels rather light:

The back has two pairs of RCA connectors: one for input and one for output. There is a switch to select auto-on with audio, 12 volt trigger, or always on which is the mode i used.

There is trim potentiometer in the back to set the input sensitivity. At first I left this in the default middle setting but that showed fair amount of channel mistmatch. So I set it to max and the two equalled out.

There is a delayed on which I assume also includes a protection circuit.

The unit is rated down to 6 ohm I think but she had no problem handling my 4 ohm load for testing.

Let's get into measurements and see how it performs.

Measurements
Unlike previous amplifiers I have tested, this is a traditional class AB amplifier meaning it is much less efficient. This point was amply made during my warm-up exercise with copious amount of heat oozing out of its relatively small internal heat sink. I was only using 20 watts/channel but with less than 50% efficiency, the thing was likely generating 50+ watts of heat. Here is how the distortion rated during that time: 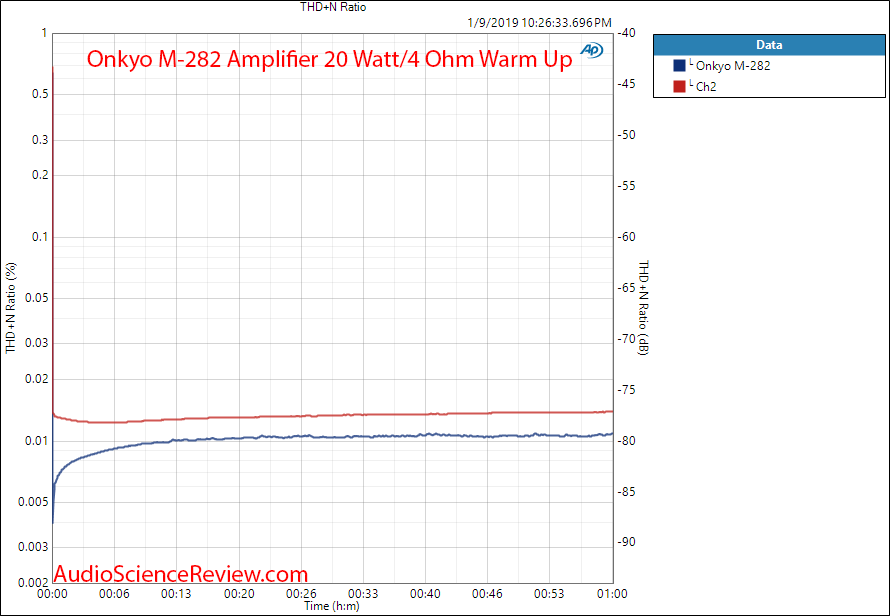 Pretty odd in that the more distorted channel (blue) got fair bit better as it warmed up but the other did not change much.

The infrared thermal image shows that the thing was cooking and cooking good: 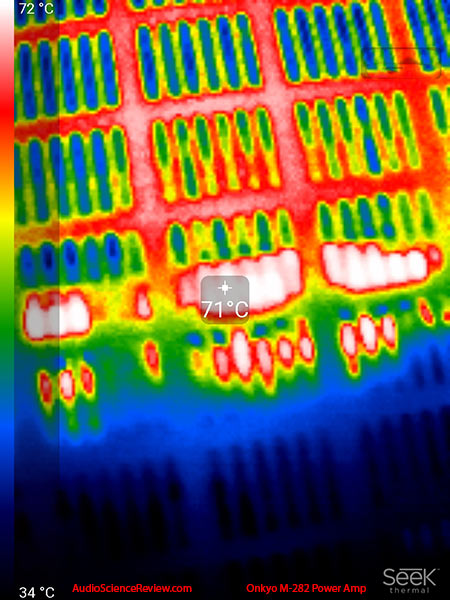 The cursor indicating 71 degrees C is on the heatsink that holds the power devices for the amplifier. They are using a heatsink with very large fins which is good but there is just no mass to it. It is not connected in any substantial way to the chassis so relies on ample convection from the bottom through the top vents. Better give this amp plenty of room to breath.

Given the much elevated temps, I did not dare to run it for 5 minutes at full power. I did however sweep the input level to see how she could do in shorter period: 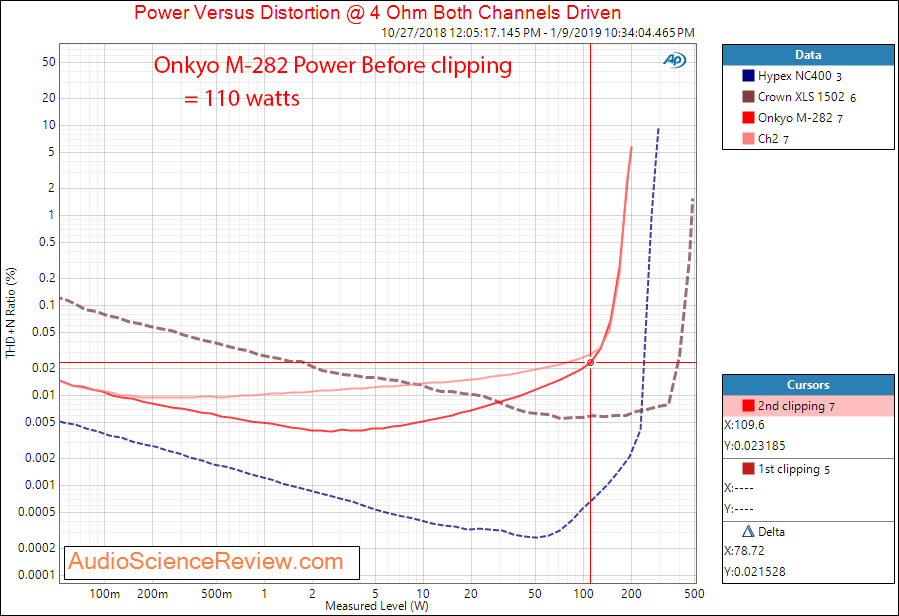 We are getting 110 watts which is just a hair over the rated 100 watts but that is at 8 ohm and my test is with 4 ohm. So not much headroom here with lower impedances due to shortfall of the power supply current.

Compared to the other two switching amplifiers, the Crown XLS 1502 (brown) is more noisy than it but has much lower distortion and has far more output power. The Hypex ncore (blue) beats it on all fronts but is also four times more expensive.

SIgnal to noise ratio is good and matches the spec from what I recall at 110 dB: 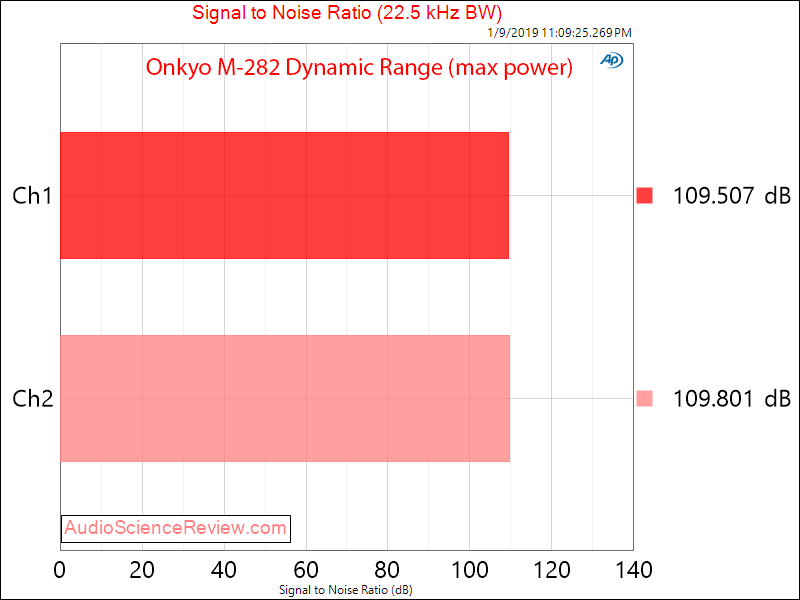 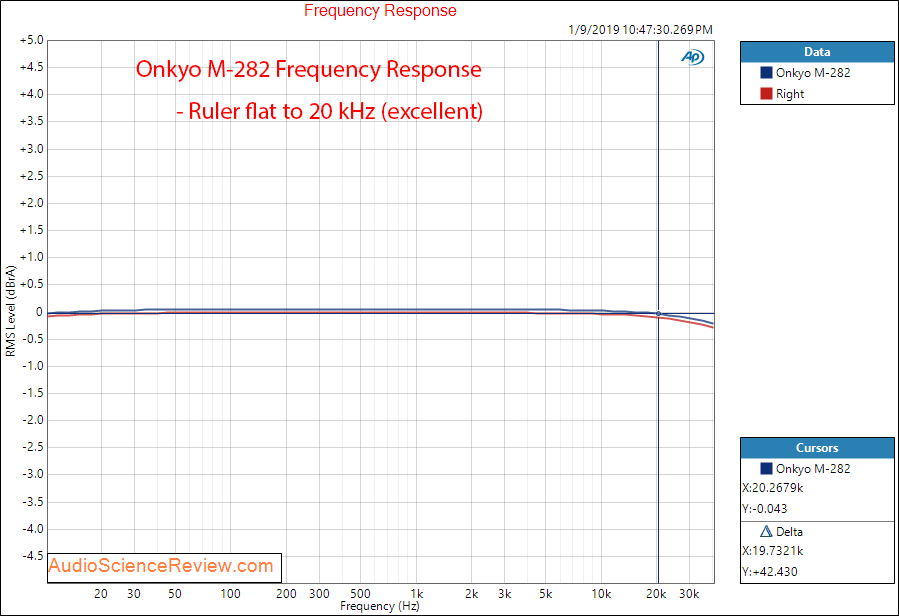 Likewise ultrasonic spectrum above 20 Khz is clean (sans the harmonic distortion of the amplifier): 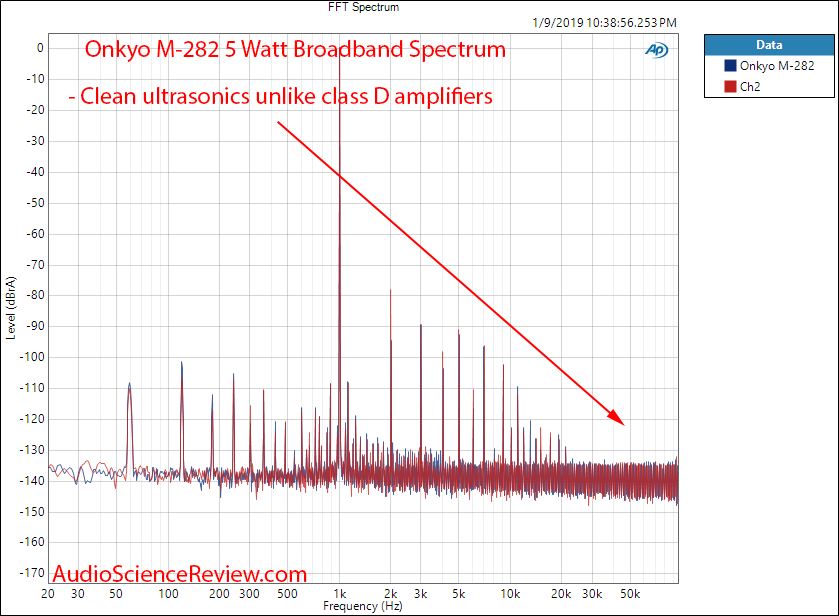 Distortion+noise was very revealing of the amplification issues with respect to topology: 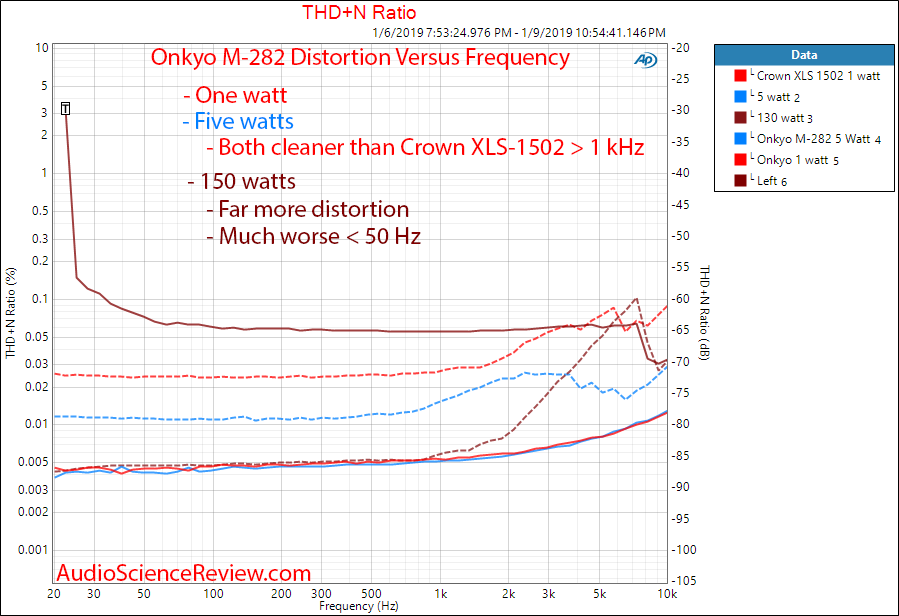 The class AB Onkyo M-282 had the opposite response. At lower levels of 1 and 5 watts, its distortion and noise was clearly better than Crown especially as frequencies rose.

Once pushed to tune of 150 watts, the Onkyo distortion rises up across the board which is not surprising. But look at the huge rise in distortion as source frequencies got lower than 50 Hz. The inadequate power supply has more of a problem with long cycles of low frequencies.

Both of these show evidence of what I subjectively hear when testing amplifiers with speakers: class AB amplifiers run out of steam in low frequencies first. Play something with heavy drums and gradually increase the level and pay attention to bass to see if the "thumps" get anemic.

In contrast, with class D/switching amplifiers, I find that they are exceptionally good at bass so the above test doesn't work. Instead, focus on clarity of high frequencies as you increase levels. Use content that has isolated high notes to make this easier.

Conclusions
I am torn when evaluating such equipment. On one hand I am astonished that a brand name power amplifier using class AB can be made, shipped and sold for so little money. The economics of this are mind boggling. I suspect these companies lose money on these low-end products and try to make it up with higher tier products.

On the other hand, this is not the type of performance I like to see in my system. We are so far, far away from level of distortion of our digital sources to the tune of 30+ dB. Designers often work hard to improve a system by 3 dB and here we have such a massive shotfal. As such, I can't recommend this amplifier unless funds are very low.

As we test more of these amplifiers we should get a better idea of what is out there that is a great find.

They say you should save money for a rainy day. It rains for about 6 months here so I need plenty of that!!! Please consider donating funds using:
Patreon: https://www.patreon.com/audiosciencereview), or
upgrading your membership here though Paypal (https://audiosciencereview.com/foru...eview-and-measurements.2164/page-3#post-59054).
Amir
Founder, Audio Science Review
Founder, Madrona Digital
Contributing Editor, Widescreen Review Magazine
Click for My Technical Background
My YouTube Channel

Very nice to see all these amp reviews, thanks Amir
D

Good write up, love the thermal imaging! Can’t wait to see how a more modern Hypex UCD base amp like the HD-AMP1 compares.
H

Thank you for the review Amir! It's interesting to see how speaker amps differ so wildly from headphone amps.

I actually own a 5.1 Denon (AVR-1312) that I use with my gaming rig. I had went with Denon because I had always heard they were a good brand. Although I guess due to it being a lower end model it's probably not bringing the performance they are known for.

So I'm mostly a headphone guy, as my username would suggest, but the question I would have to ask is, from a practical stand point is this performance fine for someone that lives in an apartment and lacks the ideal room? I realize from a technical standpoint it's definitely not living up to our standards on here but for someone like me that has a weird and definitely not ideal living room it would work fine right? It's my understanding that the room plays a major role in the sound and so getting something better would be kinda wasteful.
OP

I love the amp reviews too. I'm known for saying pick your speakers first and spend the most here. And then select an amp for your speaker that is a good match. The rest is gravy and easy for peanuts usually.

While your DAC measures have been great at showing the lack of performance of some brands and surprising goodness of others, the whole amp thing is a much worse issue. And you aren't even applying yucky reactive speaker loads yet. I suspect this amp would be surprisingly good on some Maggies. Because they are nearly resistive. I suspect with some tough ported speakers this amp might not fair so well due to the lack of extra current capability.
"The real purpose of the scientific method is to make sure Nature hasn't misled you into thinking you know something you don't actually know." Robert M. Pirsig

Headphonaholic said:
So I'm mostly a headphone guy, as my username would suggest, but the question I would have to ask is, from a practical stand point is this performance fine for someone that lives in an apartment and lacks the ideal room? I realize from a technical standpoint it's definitely not living up to our standards on here but for someone like me that has a weird and definitely not ideal living room it would work fine right? It's my understanding that the room plays a major role in the sound and so getting something better would be kinda wasteful.
Click to expand...
This level of performance is in the range where it would take very special circumstances for someone to be able to hear any of the imperfections of this device. And even then that someone might be able to tell the difference between this and better measuring amp, but not necessarily be able to say which amp is not transparent.

I would happily an amp of this quality in any setup, regardless of the level of quality of the other components. Only if I wanted to satisfy myself that I had an amp that was 100% transparent would I pass this by.

With one disclaimer: it's a class AB amp and we don't know how it performs in terms of crossover distortion. @amirm that would be something worth measuring for

EDIT: plus @Blumlein 88's points about current capability and performance into complex loads. These things also we don't know quite enough about to be definitive.

Let's not muddy the waters though with any nonsensical imperial measurements...

Here are the manufacturer's specs

What's with the 1st and 2nd clipping results? L/R channels? And why have you changed from 0.1% as your definition of clipping to 0.023185%?
Ricky Roma: I subscribe to the law of contrary public opinion... If everyone thinks one thing, then I say, bet the other way...

restorer-john said:
What's with the 1st and 2nd clipping results? L/R channels?
Click to expand...
Sorry, that is a typo. Forgot to update the labels there.

And why have you changed from 0.1% as your definition of clipping to 0.023185%?
Click to expand...
I have never used a set number for clipping. Rather, I just find the knee of hockey stick and report whatever that is.
Amir
Founder, Audio Science Review
Founder, Madrona Digital
Contributing Editor, Widescreen Review Magazine
Click for My Technical Background
My YouTube Channel 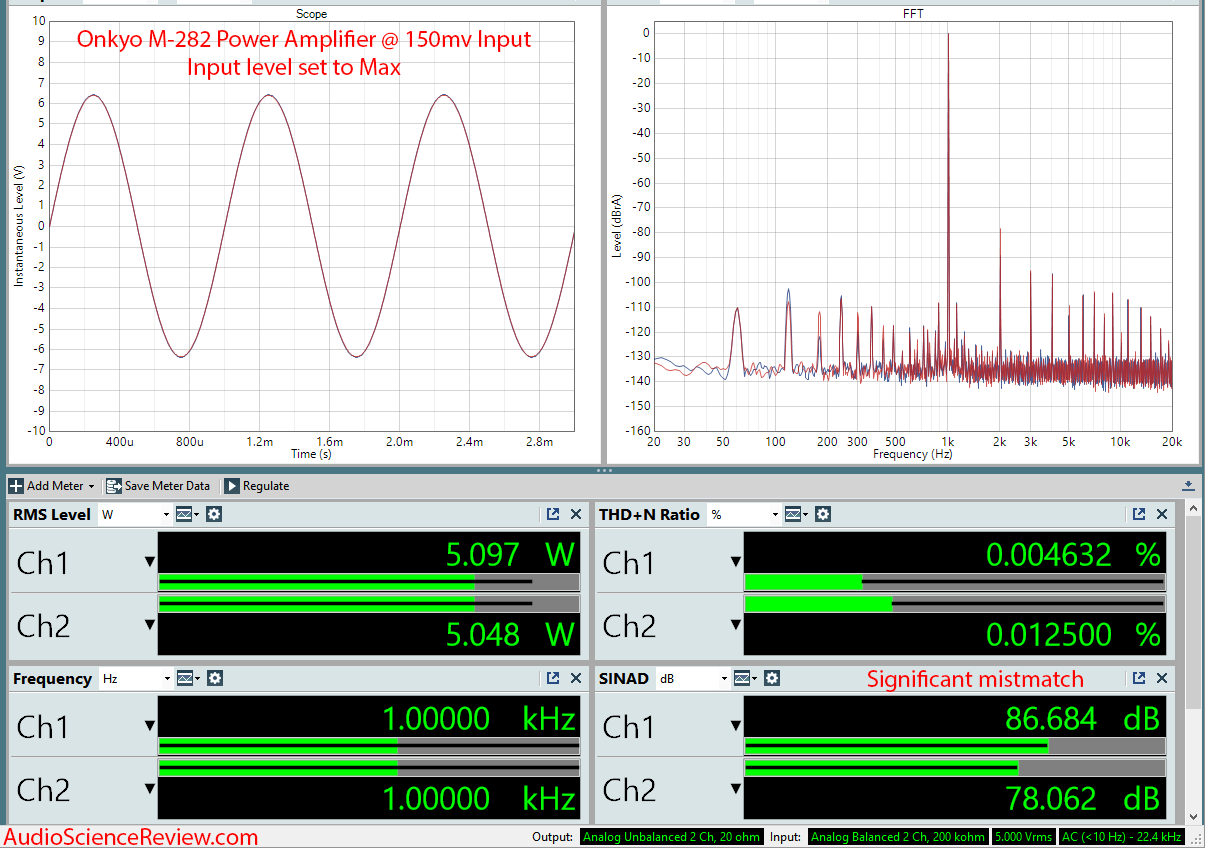 Yes, I kid, not serious. 1/3 electrical horsepower is enough for most speakers.
"The real purpose of the scientific method is to make sure Nature hasn't misled you into thinking you know something you don't actually know." Robert M. Pirsig

amirm said:
Gosh, I forgot to post the dashboard:
View attachment 20213
Click to expand...
@amirm ,
Ch1 and 2 are she same showing difference in warm-up graph? 8.6db of difference between both is rather worrying... And maybe audible?
Anti-BS Crusader

I want a 3HP amp, maybe shoot some N2O in one of these amps so we can reach those levels of power with good distortion figures.

amirm said:
I have never used a set number for clipping. Rather, I just find the knee of hockey stick and report whatever that is.
Click to expand...
My mistake, isn't that just what JA has been using for several decades as his clipping point, or was it 1%? I'm not sure now.

Problem with amps such as this, is there isn't a typical 'hockey stick' like you are used to seeing in little headphone amps. Some amplifiers go up like a virtual rocket with a well defined knee point, while others are subtle and the XY point you pick will result in massive differences in power because your arbitrary point is taken at different levels of THD.

Based on your AP plot/graph, the clipping point into 4 ohms (THD 0.1%) corresponds to approx 150W, which is much more in line and expected from extrapolation from Onkyo's 8ohm and 6 ohm specifications I listed above, isn't it?
Last edited: Jan 11, 2019
Ricky Roma: I subscribe to the law of contrary public opinion... If everyone thinks one thing, then I say, bet the other way...
You must log in or register to reply here.
Share: Facebook Google+ Reddit Pinterest Tumblr WhatsApp Email Link