pkane said:
Do you have any good references for these studies? Papers, results, discussions? I can certainly measure phase of each harmonic. Adjusting it using the transfer function will require some research.
Click to expand...

Here are my notes summarizing my reading of a couple related papers. The ear has a non linear transfer function which can change the inner spectrum envelope depending on external phase relationships. Doesn't mean any phase manipulation is audible, but it does mean using linear math is not really a good way to explore differences in perceived envelopes, and DBT is usually necessary.

From "Hearing, Its Psychology and Physiology" by the
Acoustical Society of America on the
audibility of 2nd harmonic distortion with a pure 370
Hz fundamental:

"The masking of an added harmonic is negligible below
a sensation level of 40 - 50 dB. From 50 to 80 dB,
the amount of harmonic necessary for an audible change
increases rapidly, first in absolute magnitude, and later
in relative magnitude as well...."

Summarizing:
Some monaural phase effects can be explained by the concept of the
inner spectrum, the spectrum available to the inner ear. This is
different than the spectrum at the outer ear due to non linearities
in the middle ear and inner ear. Identical external power spectra
can lead to substantially different inner spectra for different
phase angles.

Experiments were conducted where a 1020 Hz tone was presented and a
complex signal was used to mask the tone. The complex had a
fundamental frequency that was a submultiple of 1200 Hz and between
30 and 300 Hz. The total power spectrum of the masker was "speech
like" (1/f) and up to 6 kHz. The phase angles of the harmonics of
the masker were either constant (all equal) or random.

The theory is that the constant phase signal has small "silent"
intervals where even a weak signal can be perceived i.e. unmasked.
This is an important distinction that is not predicted by critical
band masking theory, in fact, are actually inconsistent with
critical band masking theory.

Further convincing experiments were conducted that strongly
supported this theory.

The conclusion:
"Since speech signals have more nearly constant rather than random
phases the results reported here are believed to be relevant to the
perception of speech signals."

I've been meaning to look at some electronic gear, but REW using speakers shows a variety of phase angles for each harmonic. I'd assumed it was partly due to differences in distance from the driver, but I've not used REW for THD of electronics enough to remember what the phase of those harmonics are in the gear.
OP

Just an update on the website. The certificate problem should be resolved. I created a separate website for Distort, so there's no longer a conflict with DeltaWave:

You may have to clear the browser cache if you've visited it recently.
Paul
DeltaWave, DISTORT, Earful, PKHarmonic, new: Multitone Analyzer
OP

A few of the reported bugs fixed and some additional test tones added for analysis in v1.0.6 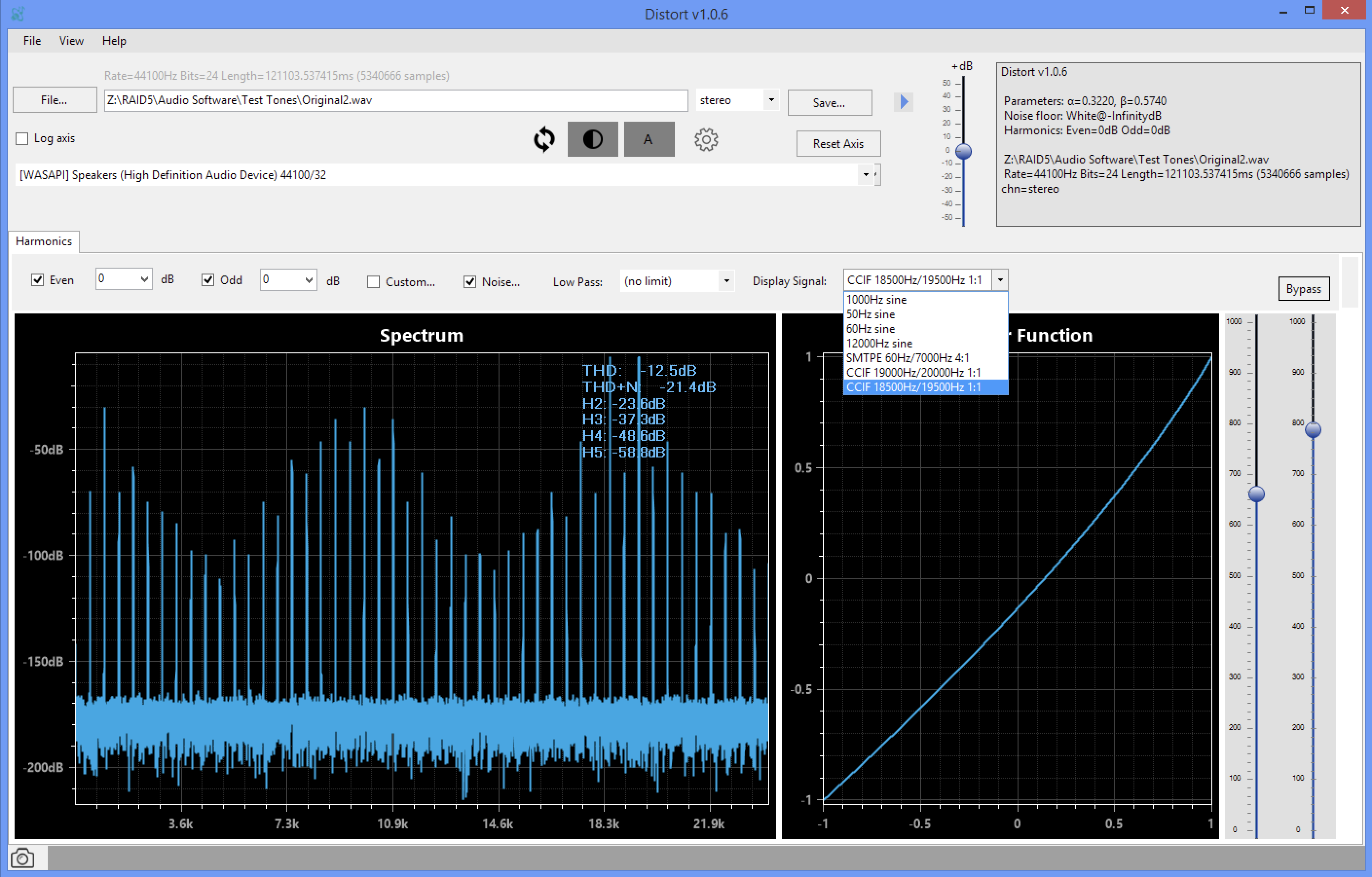 pkane said:
Harmonic content is a side-effect of the non-linear transfer function applied to the signal in time domain. I don't see how it can control phase of individual harmonics, but I'll do some research.
Click to expand...

The Importance of Phase

...So why is the phase important? Well, it's a subtle thing. I don't suppose everyone can hear it, and fewer particularly care, but from listening tests we learn that there is a tendency to interpret negative phase 2nd as giving a deeper soundstage and improved localization than otherwise. Positive phase seems to put the instruments and vocals closer and a little more in-your-face with enhanced detail.
Click to expand...

Your results may vary, but when I first explored this with the SIT-1 amplifier at First Watt, I had a knob on the front of the amplifier which varied the amount and phase of the 2nd harmonic. It was easy enough to lend the amplifiers to listeners who didn't know what the knob did and gather their comments. Roughly speaking, they tended to prefer about 1% negative phase 2nd harmonic, so it became my standard setting for that knob...
Click to expand...

An amplifier with some kind of knob to regulate the H2 phase.... would be a great idea.

I downloaded it without any trouble. What kind of problem were you seeing?

Probably is my Firefox. It has a lot of security and privacy restrictions...

pkane said:
No, it's using WASAPI or ASIO. So you are saying the supported format is 24/48k but it's not working? Let me see if I can figure out why.
Click to expand...

Code:
However, even if you fixed this, I couldn't really use the software. I use EqAPO as crossover. Doesn't work with ASIO or WASAPI.
Ohne Musik wäre das Leben ein Irrtum.

digitalfrost said:
Code:
However, even if you fixed this, I couldn't really use the software. I use EqAPO as crossover. Doesn't work with ASIO or WASAPI.
Click to expand...

You can save the distorted file. And listen to it like any other. Not as convenient, but useful.

maty said:
Probably is my Firefox. It has a lot of security and privacy restrictions...

My Firefox downloaded it fine (Linux Mint)
People have a tendency to overestimate their hearing capabilities.
Use your ears to listen to music not as an analyzer.

I have so restrictions that is more easy to use other browser!

Why downgrade vinyl rips even further, they are by definition already loaded with harmonics that weren't in the original recording.
It makes more sense to use well made digital recordings.
People have a tendency to overestimate their hearing capabilities.
Use your ears to listen to music not as an analyzer.

Well, the master is digital. Mint, without clicks or... and any treatment with iZotope; only captured in 32/192 WAV, edited and converted to 24/192 FLAC.

It is about checking if we notice differences.
"Comment is free, but facts are sacred" - C. P. Scott

The master may be digital but the cutting and playback alter the original sound in FR response and harmonic content so no matter how one twists and turns it the rip will already have added harmonics that can't be removed, only made 'worse'

A test you could do it to get the original digital version and add harmonics till you find the sound is about the same. You may also have to change the FR to match that of the playback cartridge+wires+RIAA correction deviations.
People have a tendency to overestimate their hearing capabilities.
Use your ears to listen to music not as an analyzer.
OP

digitalfrost said:
Code:
However, even if you fixed this, I couldn't really use the software. I use EqAPO as crossover. Doesn't work with ASIO or WASAPI.
Click to expand...

It appears that DISTORT did try to open the device with 24/48000 settings and failed. Did you say that's what should work? Or is it because it's not WASAPI or ASIO compatible? The driver didn't like this setting. I see that I did make one mistake. I was going to try 16 bits, after 24, and it looks like it tried 24 twice

As @Blumlein 88 said, you can still use DISTORT, just have to save the file first. So you think DirectSound will work with EqAPO?
Paul
DeltaWave, DISTORT, Earful, PKHarmonic, new: Multitone Analyzer 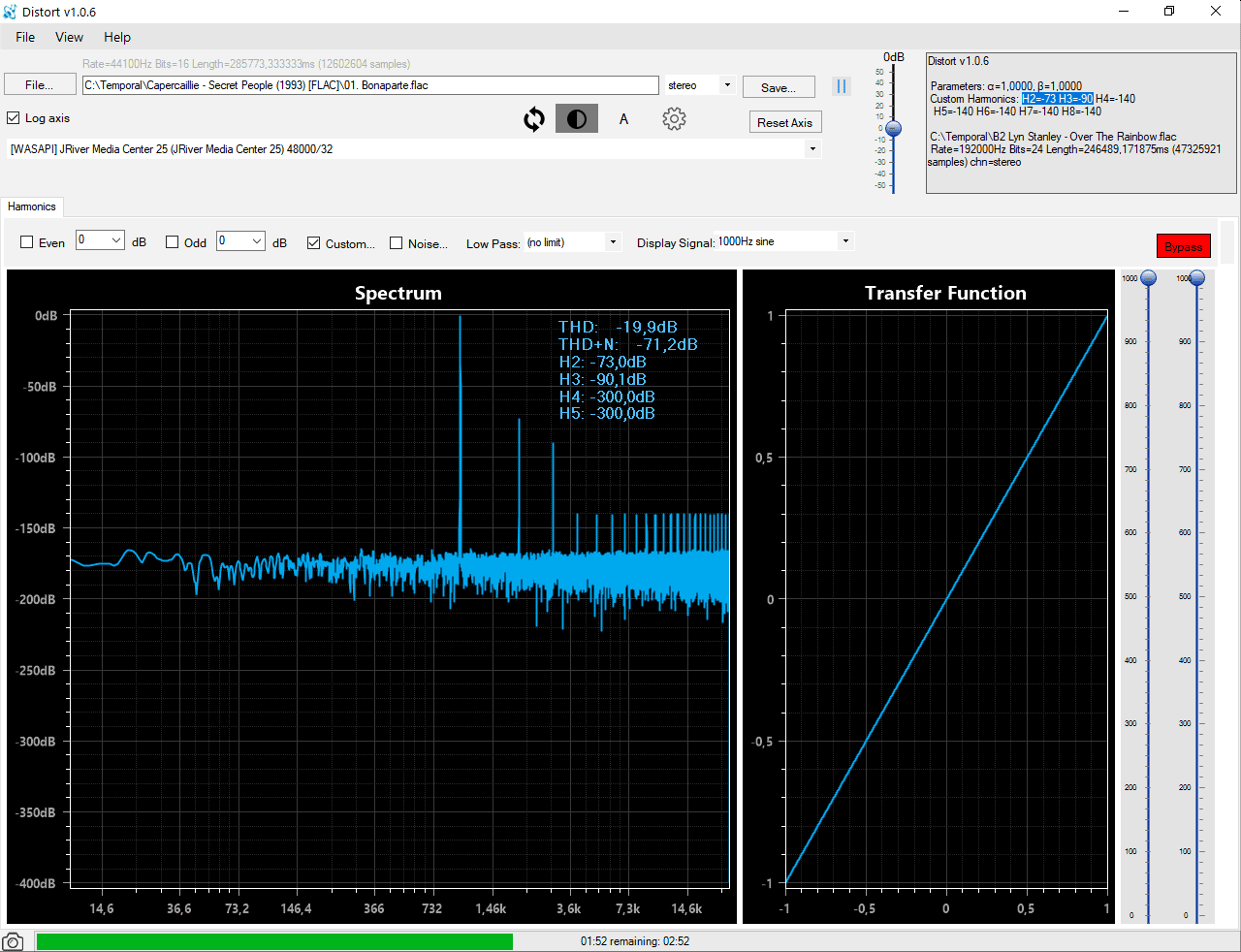 16/44. Female vocal + acoustic instruments + synthesized. I like more without, aka Bypass.

"Few woman fronting any kind of British band possess a voice to touch Karen Matheson's, remarkable in English but breathtaking when she draws on Hebridean roots to sing in Gaelic" (Daily Telegraph)
Click to expand...

Yeah, anything that doesn't use the device exclusively will work - MME/WDM/DS. I'm using the RME MADIface drivers, 0.9685 (latest atm). Card is set to 24/48. So while EqAPO will not work with ASIO/WASAPI, DISTORT should at least do something and not just fail.
Ohne Musik wäre das Leben ein Irrtum.
OP

digitalfrost said:
Yeah, anything that doesn't use the device exclusively will work - MME/WDM/DS. I'm using the RME MADIface drivers, 0.9685 (latest atm). Card is set to 24/48. So while EqAPO will not work with ASIO/WASAPI, DISTORT should at least do something and not just fail.
Click to expand...

So it fails and exits the software? Or just displays an error message and continues?

That’s what I would expect it should do when the driver can’t play any of the formats
Paul
DeltaWave, DISTORT, Earful, PKHarmonic, new: Multitone Analyzer
You must log in or register to reply here.

G
When do we start looking at NCD?
2

A/B test of two DACs - do they sound different?
2

What is the real dynamic range during your listening sessions? - test
2

THD and IMD Measurement: Do they represent the actual nonlinear distortion?
2 3