This is a review and detailed measurements of the AudioQuest JitterBug USB data and power noise filter. It is on kind loan from a member. The Jitterbug costs US $60 from Amazon including prime shipping. I purchased a JitterBug back in 2015 when it had recently come out and my measurements showed it to have no positive effect. If anything, it seemed to add some noise that wasn't in the output of the DAC. As if to get revenge, my dog got a hold of it and chewed up the case but magically, the circuit itself survived! Anyway, this is a second look at a non-chewed up version.

The Jitterbug is an inline USB device with non-remarkable look: 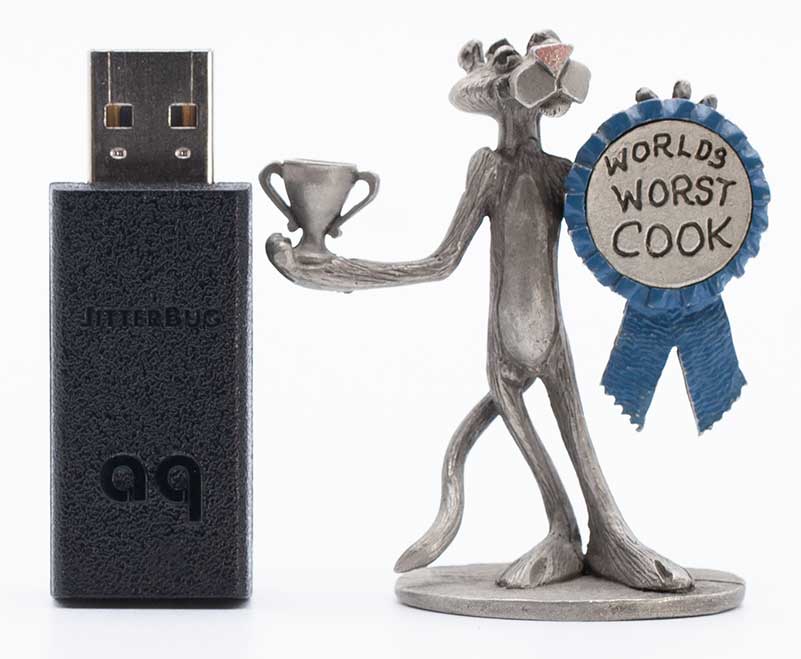 You just put it inline with your USB cable and it performs its magic. That magic is this according to AudioQuest: 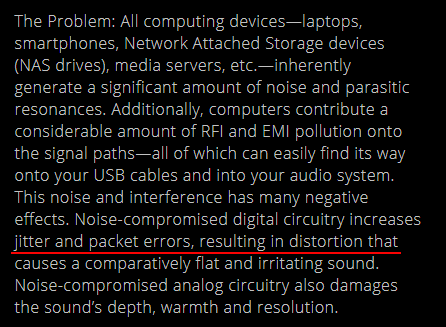 From prior testing of other USB decrapifiers, if real error is induced in USB transmission, the result is severe static and audible flaws. It does not have the effect they describe ("flat and irritating sound"). I also don't know how noise causes sound depth to decrease. If anything, a bit of noise sometimes helps give that illusion (due to increased high frequencies). Regardless, we can measure noise and distortion very easily so let's get into that.

Topping D50s Measurements
Topping D50s is a good test case here since it has independent USB power and data, allowing us to test the JitterBug on each cable independently. Let's start with a 1 kHz tone:

This is a high resolution FFT transform with averaging which allows us to see the smallest differences. Indeed we see many spikes here and there at whopping -130 dB or so. Our hearing threshold is around -116 dB so these are not audible yet very much instrumentable. As we see though, the Jitterbug makes no difference whether we put it on the USB data cable (blue) or power line (green).

The device is called "jitterBug" so perhaps it reduces jitter:

Out of luck again. There are tiny differences which vary from moment to moment. This demonstrate how sensitive our instrumentation is that it catches the device literally breathing a bit higher or lower. Yet no improvement can be seen from JitterBug on either cable (data or power).

Let's get rid of our source signal and just look at noise spectrum:

The power supply noise as represented by multiples of 60 Hz starting at 120 Hz is there and not at all reduced via Jitterbug.

Maybe Topping D50s is too good to need Jitterbug. So let's step down to Topping D10 DAC which retails close to what JitterBug costs:

Topping D10 Measurements
Let's start with our usual dashboard starting with D10 by itself: 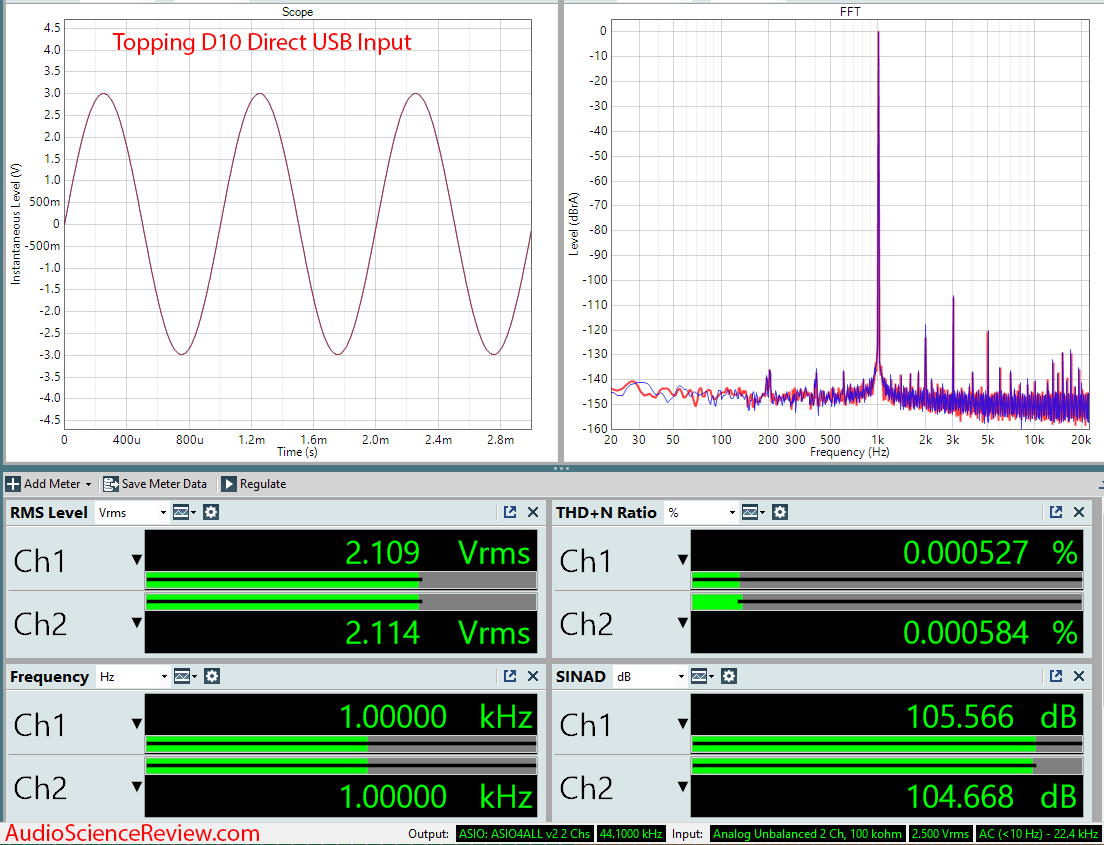 The D10 jumps up and down 1 to 2 dB on its own in SINAD department. So run to run variations change a bit. Taking that into account here is the D10 with Jitterbug: 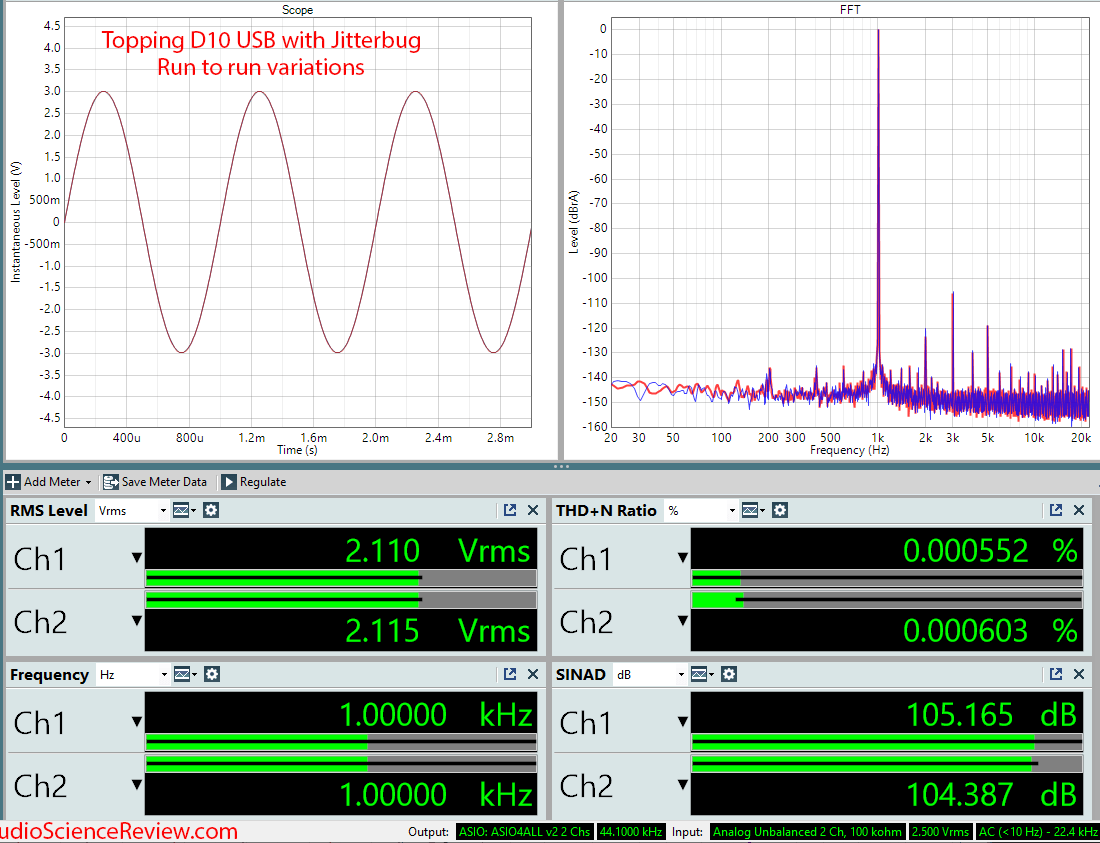 The output level is the same. Frequency is the same. THD+N/SINAD is a hair different but again, the D10 by itself varies in this department. And Jitterbug had no effect on it. If it truly reduced noise levels in the output of the DAC, it should have made this variation smaller. But it did not.

Here is our 1 kHz spectrum:

Jitterbug version has higher second harmonic but I think that is run to run variation. There is certainly no noise reduction even though both data and power are running through the JitterBug. 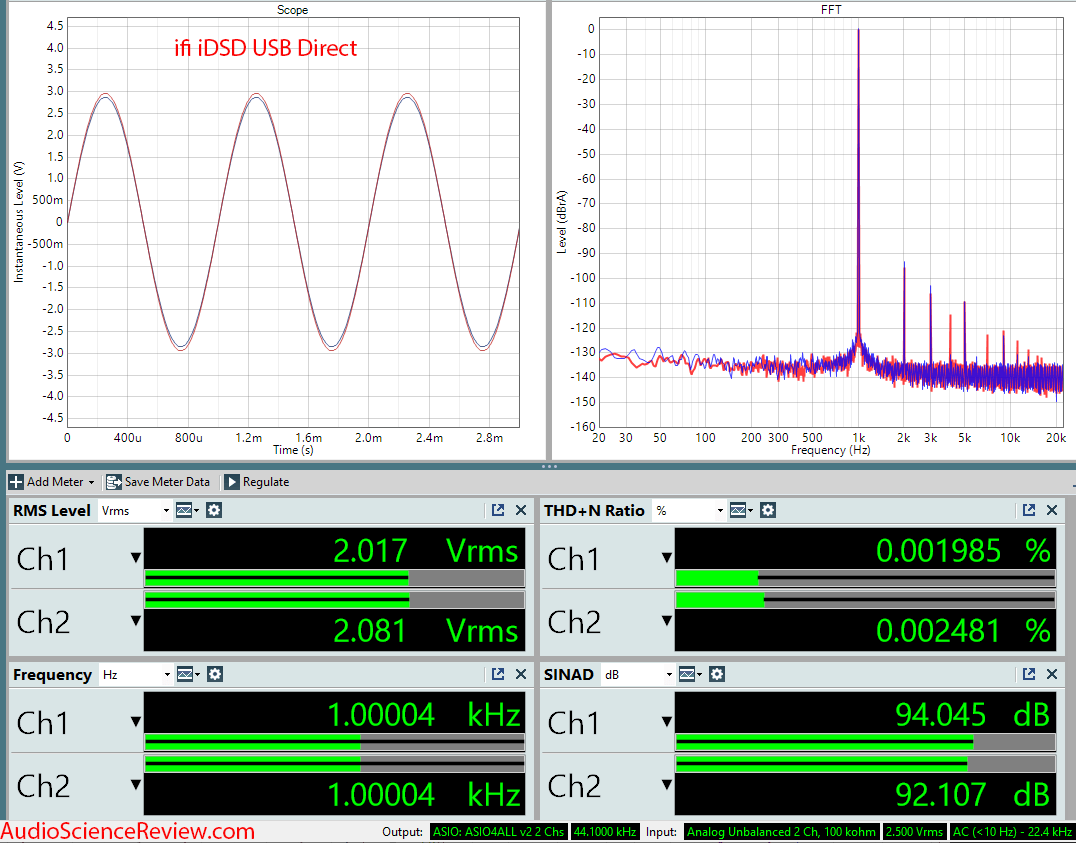 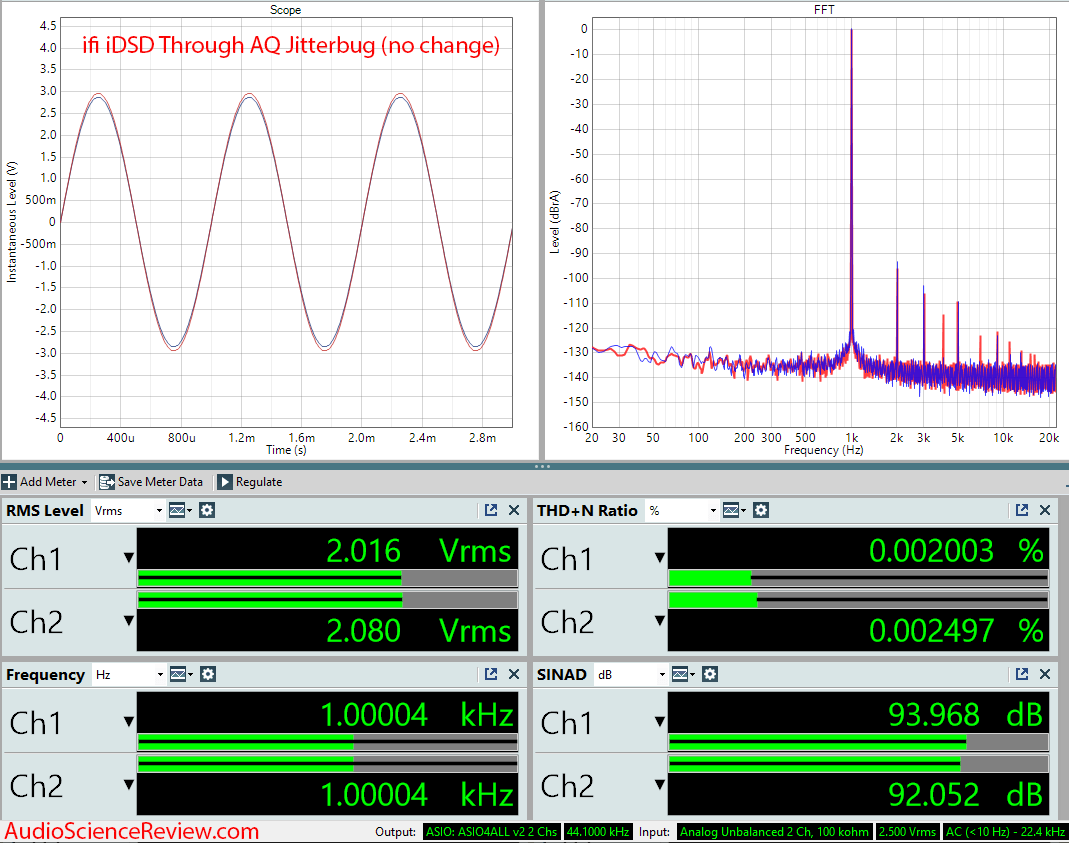 Schiit Modi 2 USB DAC Measurements
The most sensitive (and worst implementation of USB) that I know of is on Schiit USB Modi 2 DAC. So I usually resort to using it to check for effect of USB decrapifiers. Let's start with its dashboard alone: 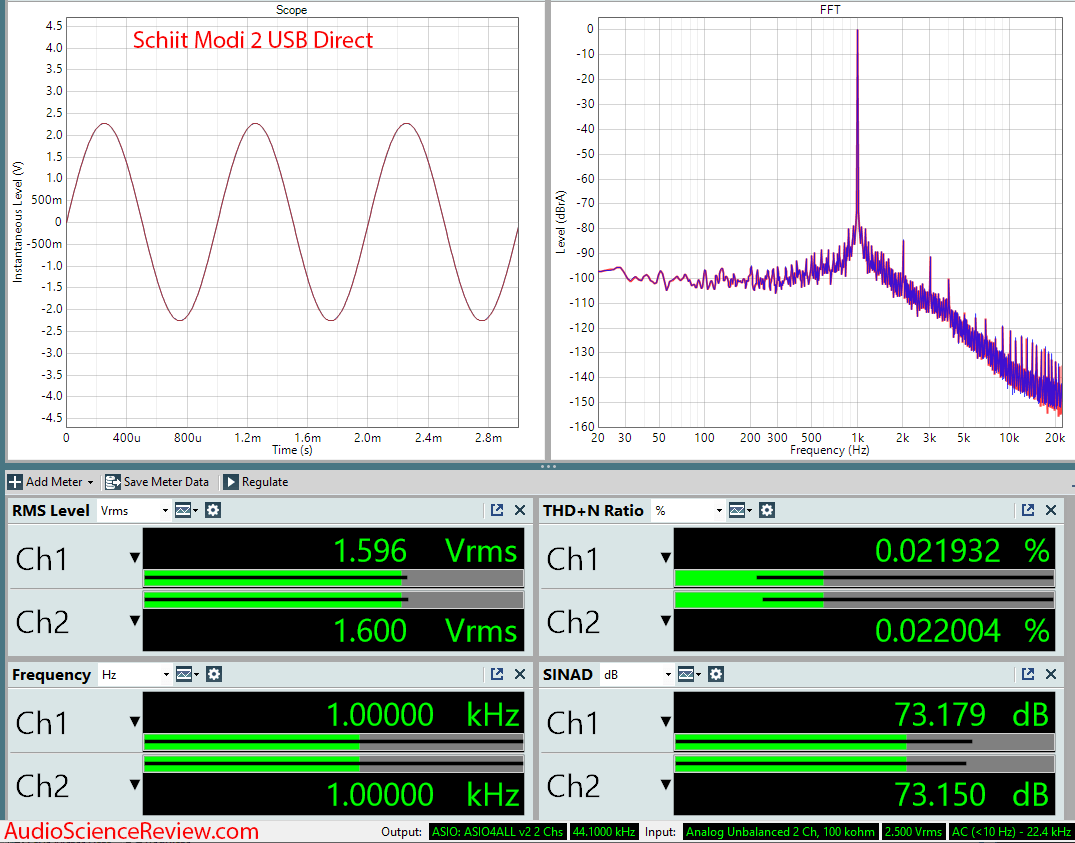 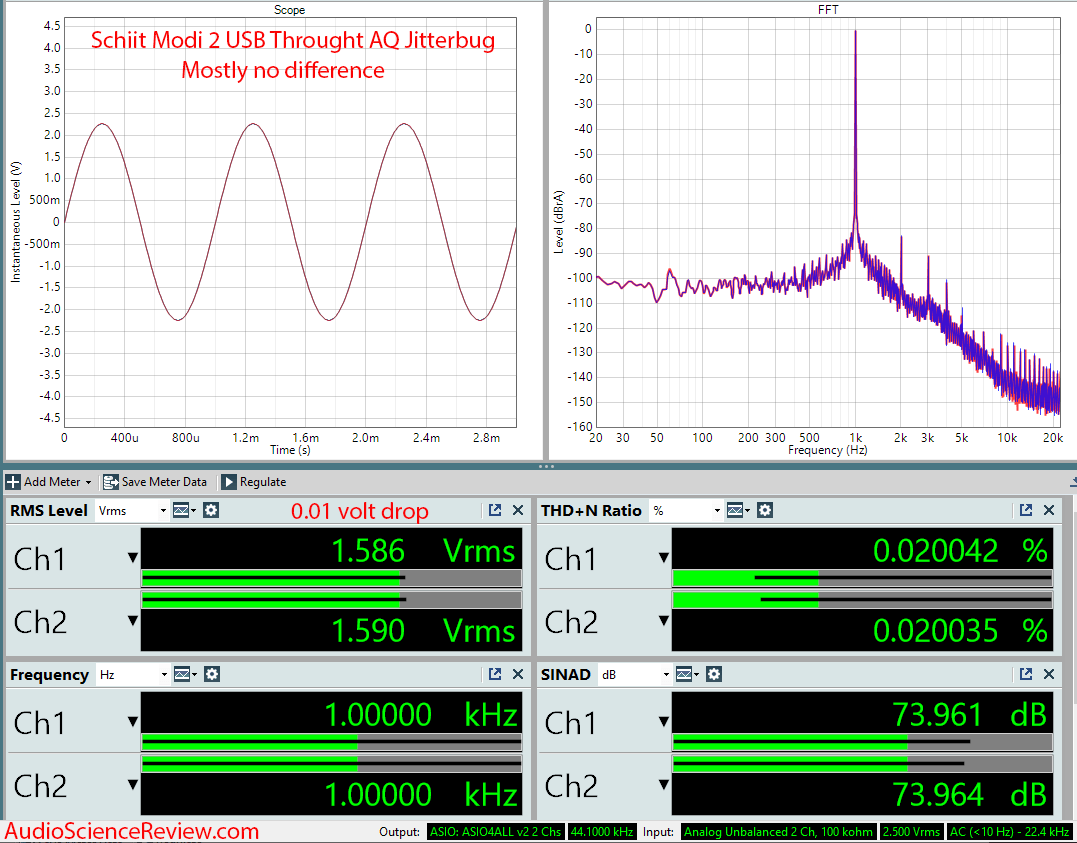 Notice that the output voltage in channel 1 dropped from 1.596 to 1.586. I verified that this was due to Jitterbug as it was consistent. The JitterBug is causing some voltage drop on the USB bus. And due to poor regulation inside Modi 2 DAC, we readily see that. So if JitterBug could do anything, it would be with this DAC. Alas, that is not the case. SINAD which is the sum of distortion and noise relative to our signal remains at the same (poor) level of 74 dB. 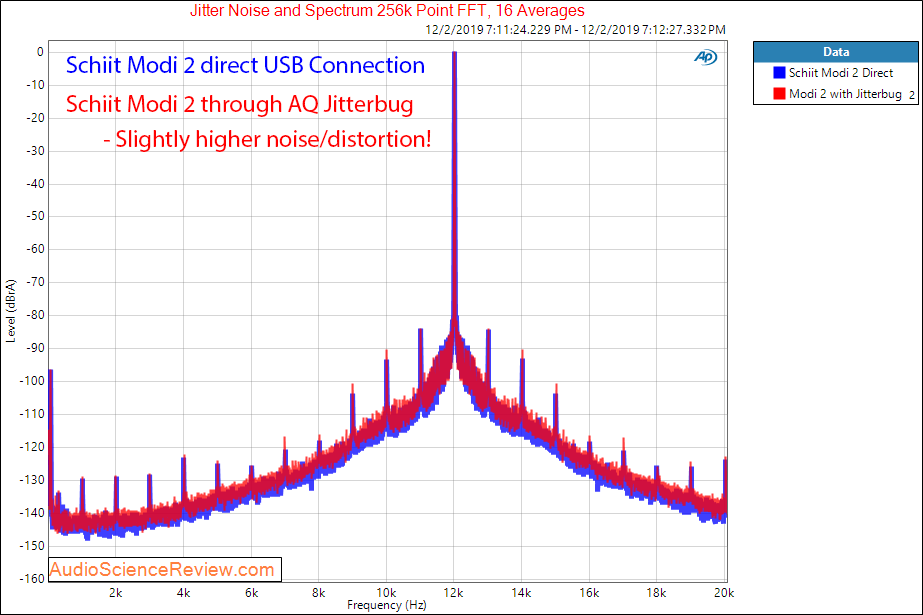 Looks like jitter has actually worsened just a hair with JitterBug (in red)! Not a source of concern though but shows that we can measure a negative effect here, not positive.

Noise spectrum shows no improvement whatsoever with JitterBug despite 250 kHz bandwidth of the measurement: 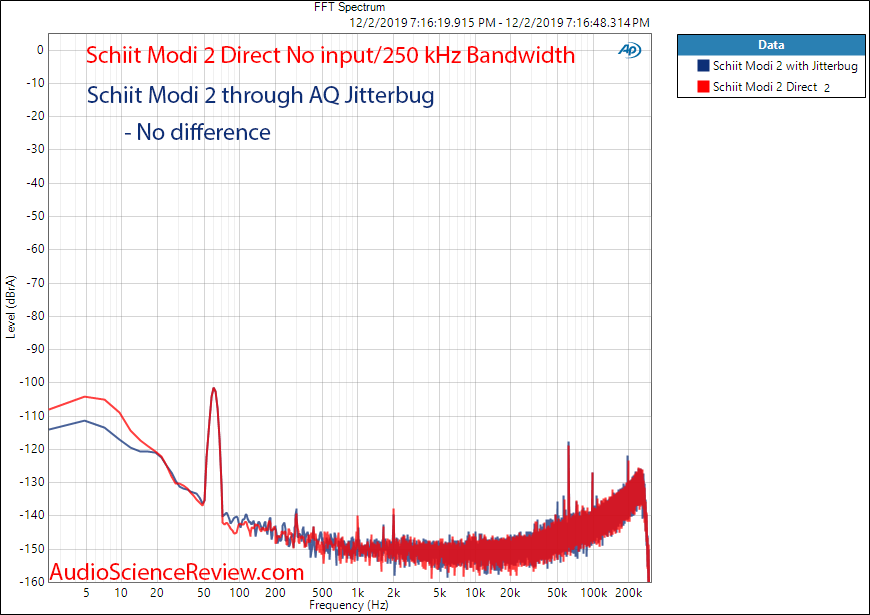 Listening Tests
I hooked up the Modi 2 to the excellent SMSL THX SP200 headphone amplifier and used my Sennheiser HD-650 headphones for comparisons. I queued up an excellent track with great soundstage and detail and played it without the Jitter bug through Roon player. I then disconnected and quickly reconnected using JitterBug. Roon is nice in the way it reinitialized the USB device and was ready to play in around 5 seconds. While too long for any definitive judgments, I hear no difference at all. I then took out the JitterBug and the result was the same.

Conclusions
We can easily demonstrate that devices like JitterBug cannot work. USB is a high-speed bus. You cannot filter it without causing the data to be corrupted. So any filtering that JitterBug performs there must be well into Megahertz region and hence outside of audible band. Since data transmission to a USB DAC is highly reliable anyway, filter does no good. As to filtering of the USB power, the DAC itself has a regulator and filter of its own. Adding the tiny bit of filtering JitterBug has is like spitting in an ocean and expecting its level to rise.

But it is always good to confirm our understandings using precise measurements. Measurements that can dig way, way deeper than levels we can hear. There, across four different DACs, there is no difference that can be detected in any measurement from distortion to noise and jitter. The only differences were seen were negative in the form of tiny output level and increased jitter in Modi 2.

Bottom line, the AudioQuest Jitterbug does one only one thing: it filters your bank account, reducing your balance by $60. If anyone can demonstrate that it makes an audible difference in a controlled blind test, I will donate US $600 to the charity of their choosing.

Please save your money folks. Give it to Charity. Go have a great dinner. Anything but rewarding people who build these useless devices that attempt to solve problems that don't exist.

Yes, I have hired a new panther to model for me. He is made of pewter so didn't come cheap. I appreciate donations to refill my account using : https://www.audiosciencereview.com/forum/index.php?threads/how-to-support-audio-science-review.8150/
Amir
Founder, Audio Science Review
Founder, Madrona Digital
Contributing Editor, Widescreen Review Magazine
Click for My Technical Background
My YouTube Channel

Snake oil from Audioquest? Shocked, just shocked I am!

(Thanks for the test, though, especially with four different DACs and multiple metrics - very helpful!)

I'm not surprised. File this under speaker wires which cost more than a good used car, and $2,000 power cords. Fortunately this thing will not dent the bank accounts of the suckers who buy it by much. Thank you @amirm.
I've got soul, but I'm not a soldier...

But did you try two connected to each other as Audioquest recommends? Lol.

At first I didn’t check the author of the review and assumed we had an imposter.
OP

Actually it looks like on the D50 with Jitterbug on power and Direct USB for signal the noise around 4 khz and 20 khz was down several decibels. Now not enough to make a sound difference, but it is odd it would do that. On the iFi the 4th and 6th harmonic levels are nearly 20 db different. Very low and not audible, but again interesting.
"The real purpose of the scientific method is to make sure Nature hasn't misled you into thinking you know something you don't actually know." Robert M. Pirsig

You should measure its effect in combination with one of their DragonFly DACs. What if it only works with them?
Home: JDS Labs OL DAC → JDS Labs Atom Amp → Sennheiser HD 560S
Work: Zorloo ZuperDAC-S → Audio-Technica ATH-M40x

Snake oil cable vendors make a product that does nothing, surprise surprise.
OP

This is the one that my dog "operated on:" 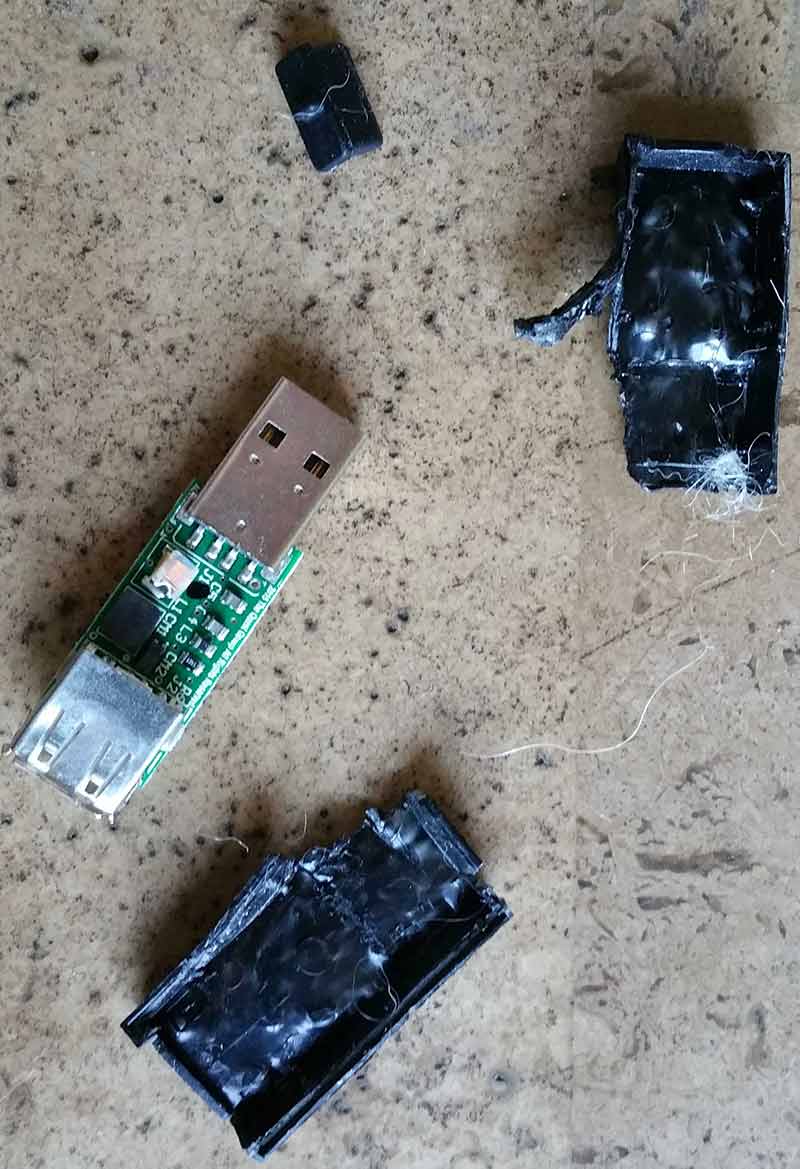 What is a crime is how few components are in there:

A couple of capacitors, inductors and chokes and they charge $59? The total manufacturing cost must be under $10.

Why anyone is at ease putting aside common sense to think the DAC designer couldn't include this bit of filtering is beyond me.
Amir
Founder, Audio Science Review
Founder, Madrona Digital
Contributing Editor, Widescreen Review Magazine
Click for My Technical Background
My YouTube Channel

amirm said:
This is the one that my dog "operated on:"

You should re-test that one, perhaps it performs better now after that "mod"!
OP

Hugo9000 said:
You should re-test that one, perhaps it performs better now after that "mod"!
Click to expand...

He has completely eaten plastic things before. Fact that he did not swallow this one, should have indicated something!
Amir
Founder, Audio Science Review
Founder, Madrona Digital
Contributing Editor, Widescreen Review Magazine
Click for My Technical Background
My YouTube Channel

How is this not outright fraud? It’s a form of theft.

amirm said:
He has completely eaten plastic things before. Fact that he did not swallow this one, should have indicated something!
Click to expand...

The snake oil left a bad taste in his mouth, poor fellow!

Tom C said:
How is this not outright fraud? It’s a form of theft.
Click to expand...

Blumlein 88 said:
Actually it looks like on the D50 with Jitterbug on power and Direct USB for signal the noise around 4 khz and 20 khz was down several decibels. Now not enough to make a sound difference, but it is odd it would do that. On the iFi the 4th and 6th harmonic levels are nearly 20 db different. Very low and not audible, but again interesting.
Click to expand...

I don't see the harmonics change on the iFi...? It's still early morning here though lol

Veri said:
It's not theft if people buying it say it works .....

To procure by deception, you could argue it's theft.
independence, we do it together..
https://www.patreon.com/audiosciencereview

Tom C said:
How is this not outright fraud?
Click to expand...

Does Quality of Coax Input Matter for DACs?
5 6 7