This is a review and detailed measurements of the Adam S2V Professional Studio Monitor (powered speaker). It is on kind loan from a member. The S2V costs US $1,750 (each, NOT a pair).

This is one beefy, heavy and deep bookshelf speaker: 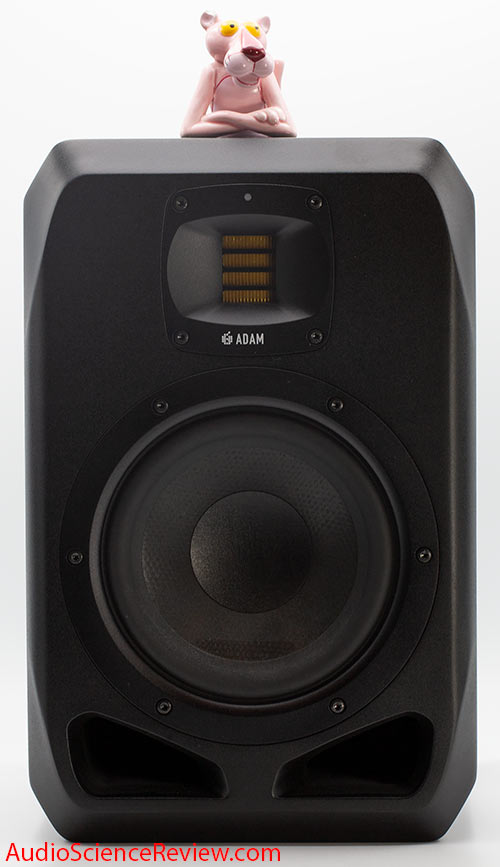 Yes, the cone was a bit dusty.

The back panel shows the inputs and output plus user interface: 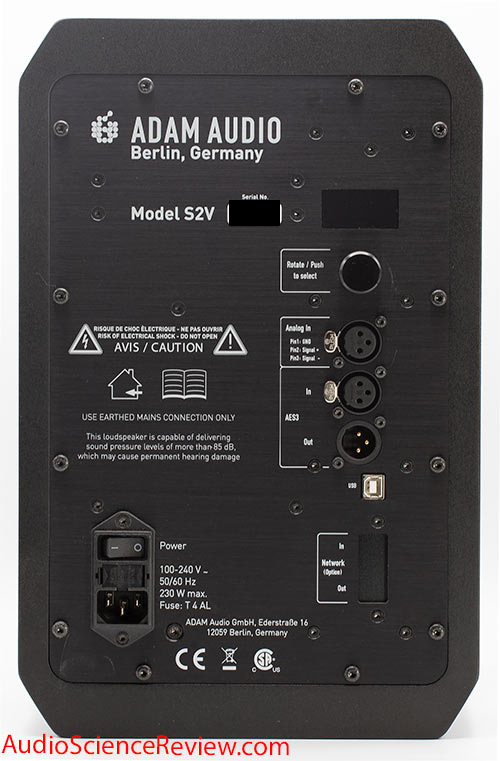 We are now at a price point where digital input (and pass-through) are provided. I used analog input however for my testing.

There is an OLED display which while small, is workable. What is not workable is the non-intuitive user interface involving that clickable rotary encoder. Even after reading the manual and watching a video, I still could not figure out how to interact with it. I was however able to select Analog input with Pure mode which is the factory preset for "flat" response.

The app was much easier to use but still has issues. None of the changes you make take effect. Good test to see if you are subject to placebo! You have to hit the grayed out "store" or "write" to get them to take. And that takes 5 to 10 seconds and involves some ticks and pops and fade up. Shame as the filters in there would be great for quick fine tuning and lowering room modes.

Measurements that you are about to see were performed using the Klippel Near-field Scanner (NFS). This is a robotic measurement system that analyzes the speaker all around and is able (using advanced mathematics and dual scan) to subtract room reflections. It also measures the speaker at close distance ("near-field") which sharply reduces the impact of room noise. Both of these factors enable testing in ordinary rooms yet results that can be more accurate than anechoic chamber. In a nutshell, the measurements show the actual sound coming out of the speaker independent of the room. All measurements are reference to tweeter axis with the grill removed.

Over 1000 points around the speaker were measured (from 20 to 20 kHz) which resulted in well under 1% error in identification of the sound field emanating from the speaker. Resulting database is 1.3 Gigabytes in size. 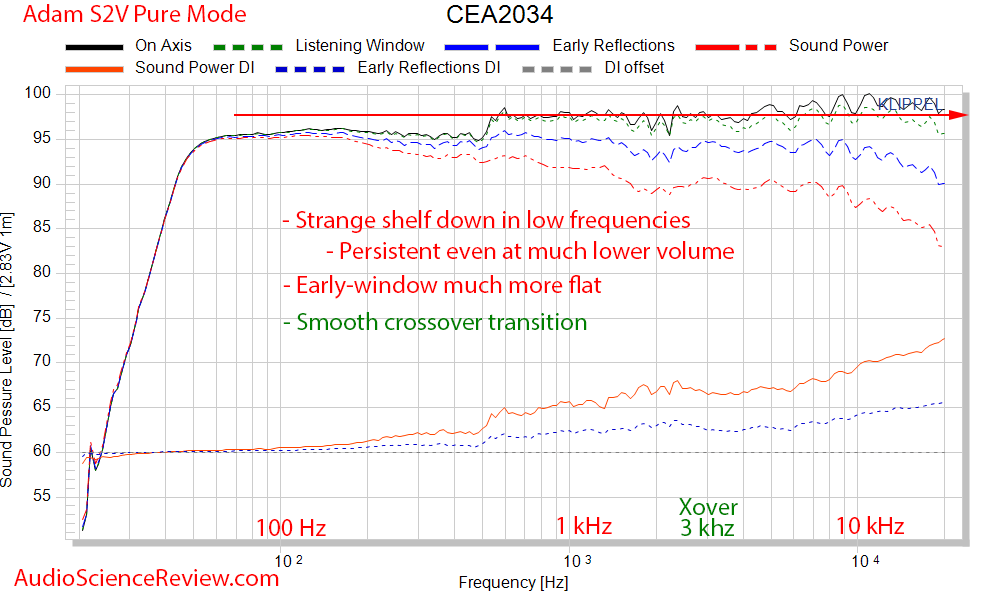 I know, I know. You think that step deep is because the speaker went into compression. Not so. The levels were already lower than what I use with passive speakers. But to stay on the safe side, I ran the entire ~3 hour measurement at less half the level and got the identical outcome. Levels were extremely low in the second try and the shelving behavior was there. The frequency is too low to have anything to do with directivity. I suspect this is a correction curve applied to the speaker on purpose, hoping that the room gain fills in the rest. What I can't explain is the anechoic chamber Adam provides: 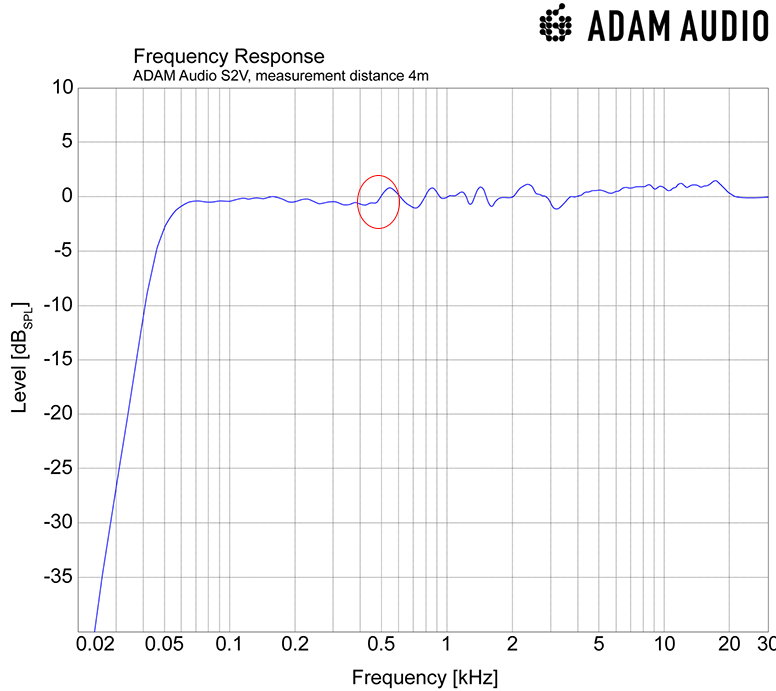 Interesting enough though, we see a variation in response at the same point I measured a rise in response. I wonder if they used some kind of near-field curve to stitch here and the gain level is wrong there. They do show a tilt up the same way I have it at higher frequencies.

I plan to contact Adam and see if they have an explanation. And am open to suggestion and comments you may have on what may be going on.

Back to measurements, the crossover is at 3 kHz but you can't see it in the response curve which shows excellent blending of the two drivers. Likely DSP was used to fully correct the response but we take it however it comes. 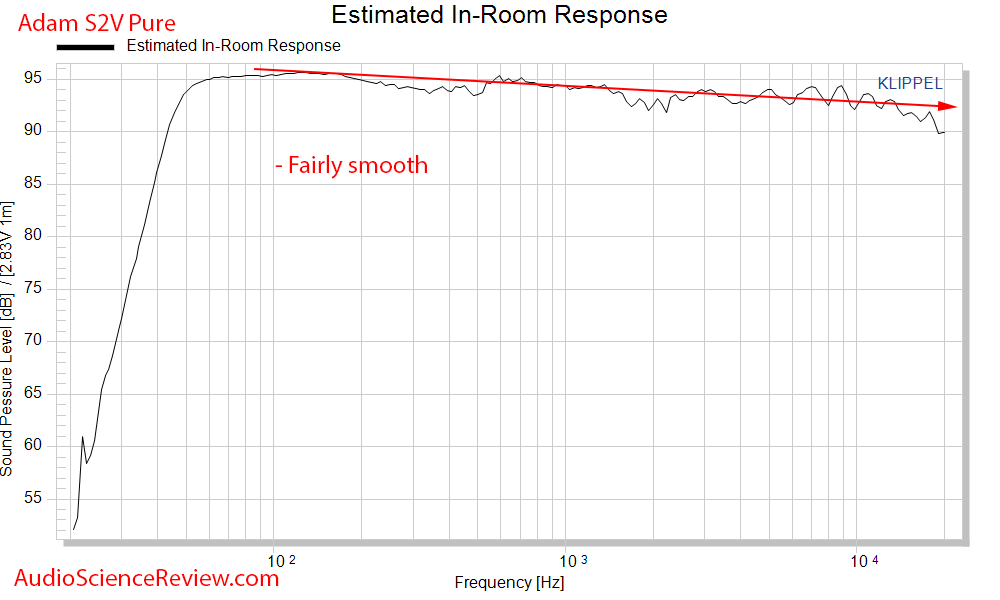 So that in-room shelving may be correct on-axis. We still have a dip though around 200 to 500 Hz so bass performance will still be a bit light.

That's it folks. The rest of the show is for people who want to dig really deep.

Advanced Speaker Measurements
Here is our zoomed in directivity: 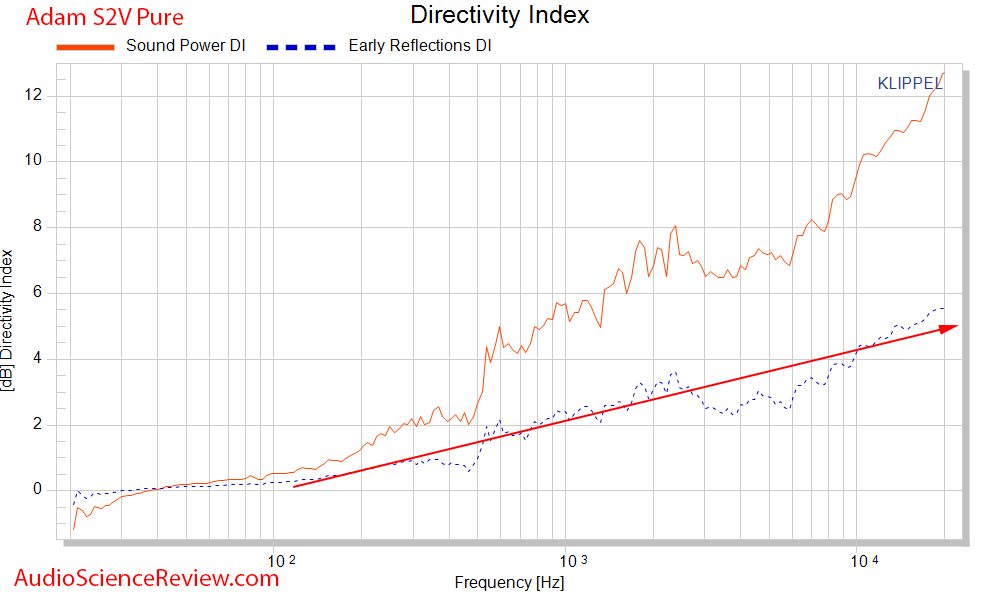 We some error around the crossover area (3 kHz to 10 kHz) so a bit of room sensitivity is to be expected. 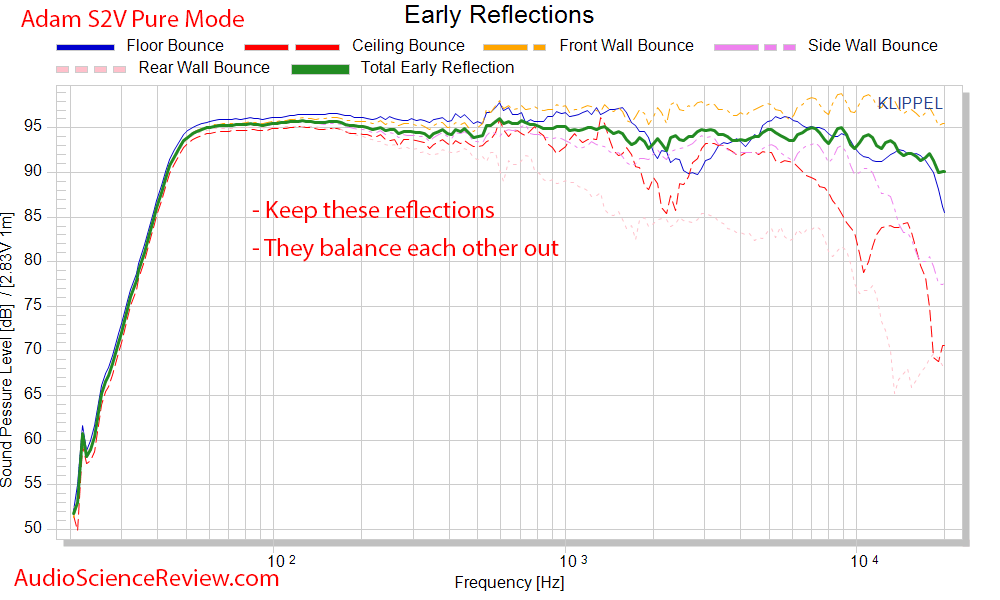 The manual systems to get rid of all reflections. Above graphs says be careful in doing so. They are balancing each other out to give a very smooth curve.

Eye-candy Speaker Measurements
Here is our contour plots which agree very well with the manufacturer measurements (theirs is much lower resolution): 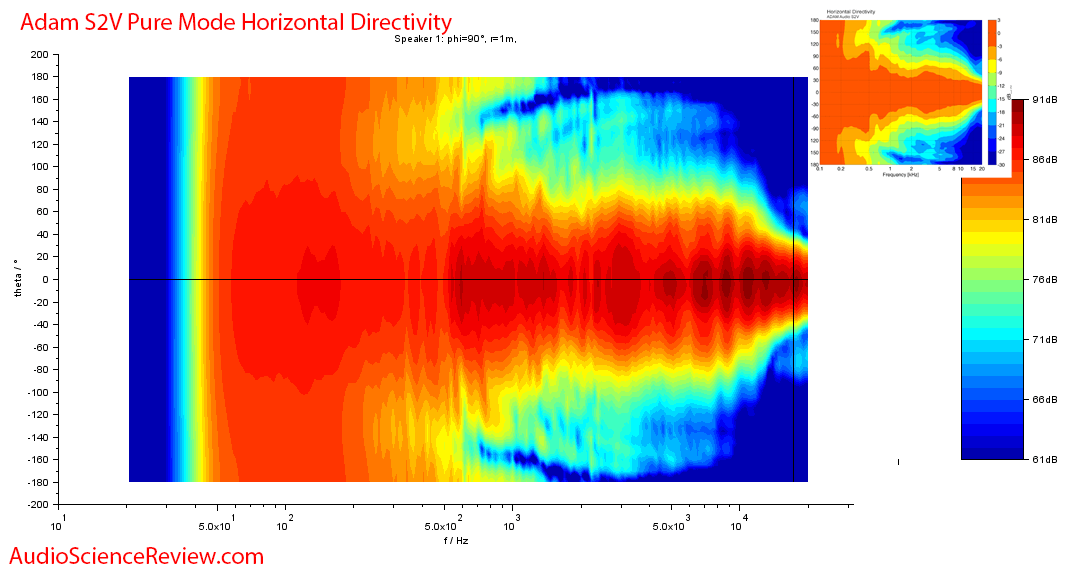 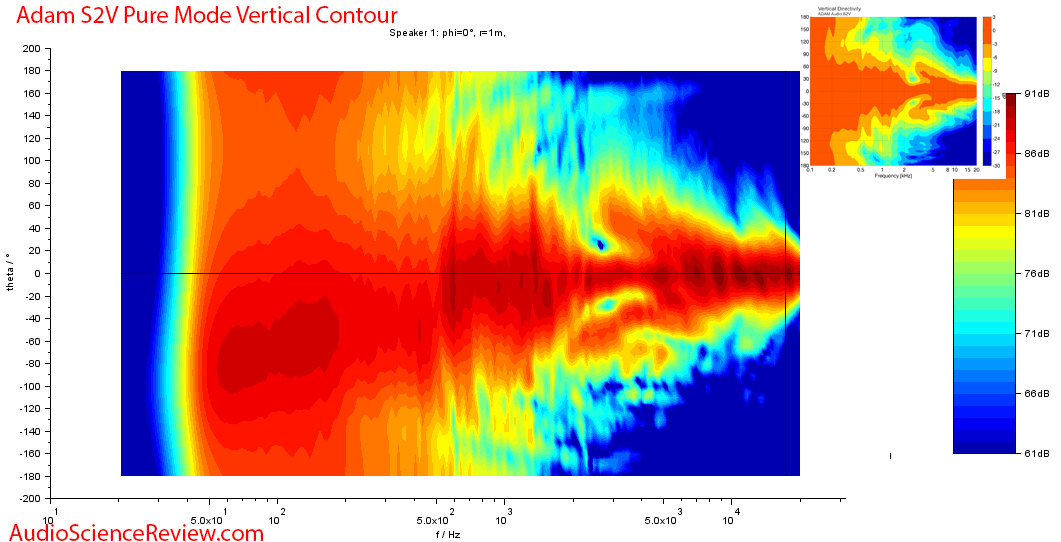 Here is the company waterfall: 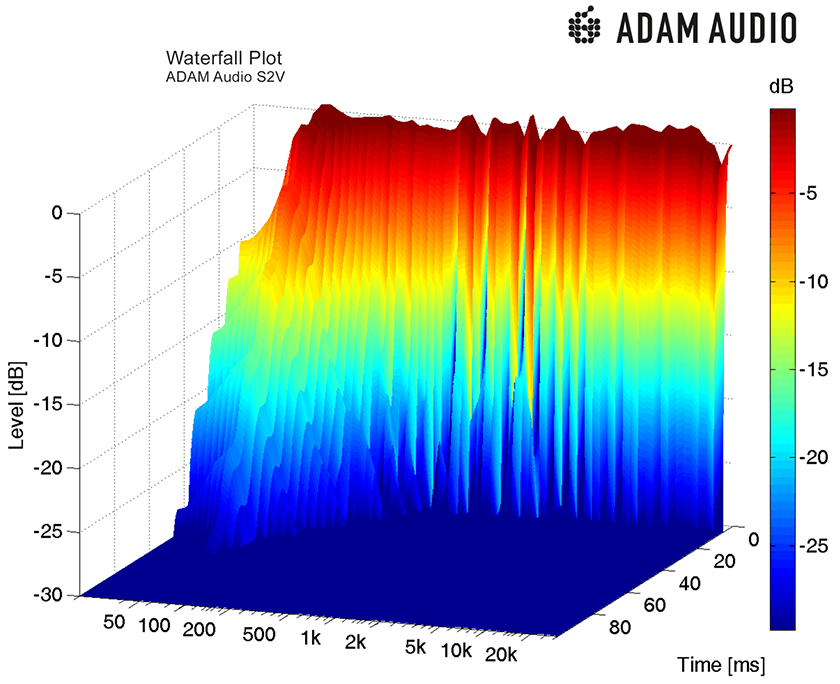 It is interesting in that it also shows the shelving response (top of the waterfall) which we have measured!

Speaker Distortion Measurements
You can see the true SPL levels in my first measurement presented above: 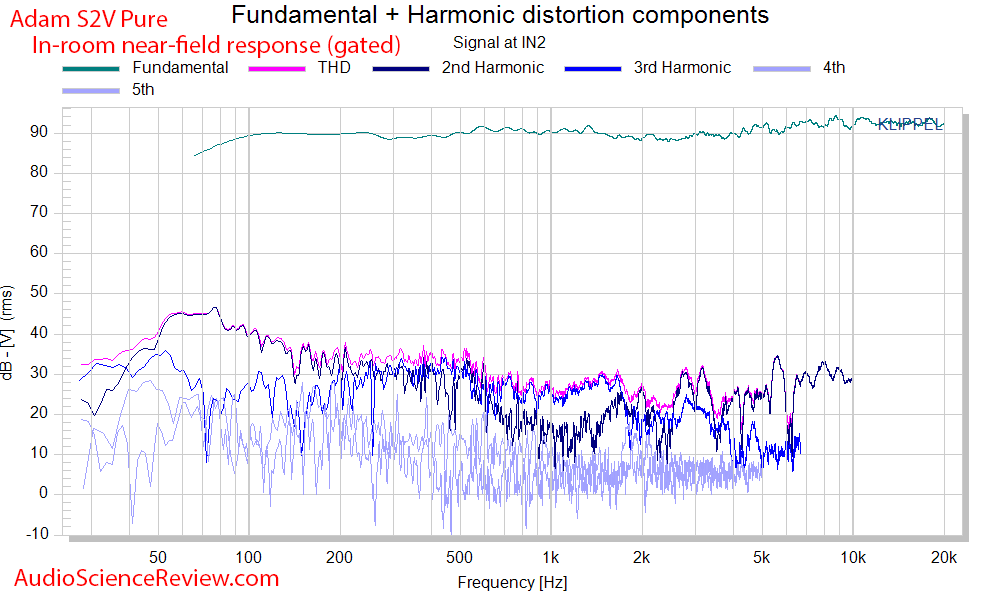 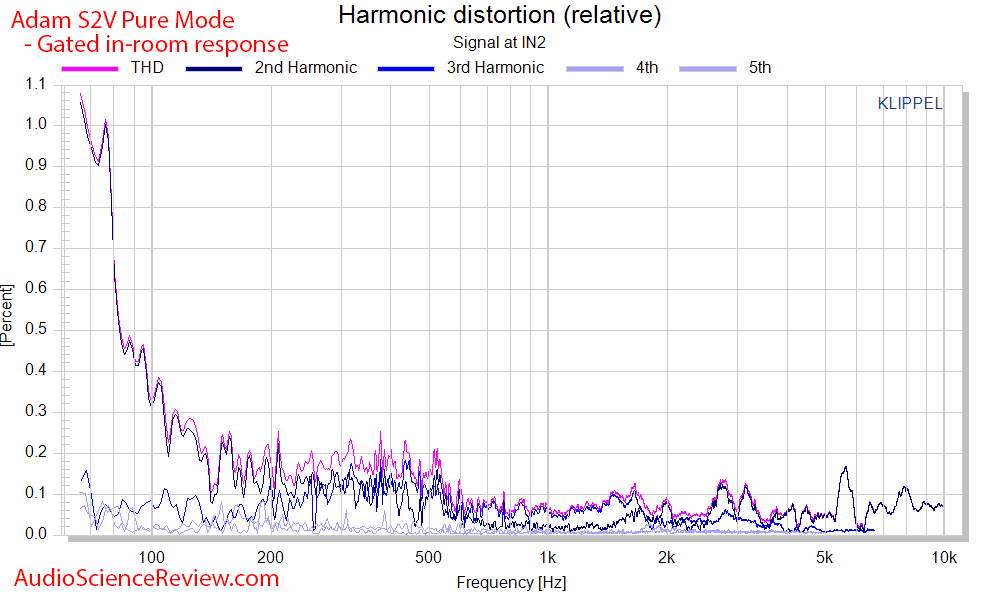 If one believes above, it is very low level of distortion.

Listening Tests
I didn't have time for extended listening and comparison. I had the cheap Pioneer SP-BS22-LR on the right and the Adam S2V on the left. Levels roughly matched, the Pioneer definitely had more bass. That is, until I increased the volume a bit and it fell apart while the S2V powered on with authority. So subjectively seems like measurements were correct in bass being low on purpose. To wit, I changed to second factory house curve mode on S2V and bass came in with vengeance.

Overall, the Adam S2v is very listenable. I would of course EQ that shelve out to get the bass where it needs to be.

Conclusions
The Adam S2V is a serious monitor with seemingly good design. The low bass probably has an explanation that we can find. Or else easily correct with an EQ (including the one built into the speaker itself). The S2V was the first powered monitor I have tested so far that did not run out of power. Nor sounded like a little point source.

I am going to put the Adam S2V on my recommended list.

My wife is out and called to see if I want her to pick up something for dinner. Feeling quite poor, I suggested Kentucky Fried Chicken (KFC). Not looking forward to soggy chicken by the time she arrives but this is all I could afford. Please donate a few dollars so I can have better dinner tomorrow night using: https://www.audiosciencereview.com/forum/index.php?threads/how-to-support-audio-science-review.8150/
Last edited: Feb 14, 2020
Amir
Founder, Audio Science Review
Founder, Madrona Digital
Contributing Editor, Widescreen Review Magazine
Click for My Technical Background
My YouTube Channel
OP

Here is the spin data.

Do "we" think the AMT driver in this monitor is the same as or different than the one in the B652-AIR?

Is that for a pair or each?
Ricky Roma: I subscribe to the law of contrary public opinion... If everyone thinks one thing, then I say, bet the other way...

Good review @amirm & nice speakers too. For the money some grills would be nice for when eating wet pasta at the desktop

restorer-john said:
Is that for a pair or each?
Click to expand...


Doodski said:
Good review @amirm & nice speakers too. For the money some grills would be nice for when eating wet pasta at the desktop
Click to expand...

I'm reasonably sure that anyone forking over the cash for these monitors is not likely to eat wet pasta while mixing... and for everything else there's stands.
"Just because I don't say it, don't mean I ain't thinkin' it - next thing you know they'll take my thoughts away." - Megadeth "Holy Wars... The Punishment Due"
I like all genres of music: progressive metal, death metal, thrash metal, black metal, speed metal... even some goth and symphonic metal.​

restorer-john said:
Is that for a pair or each?
Click to expand...

Yes, Is that each? I found them in Canada for $2359.00 but the retailer's web page does not indicate quantity.

Doodski said:
Yes, Is that each? I found them in Canada for $2359.00 but the retailer's web page does not indicate quantity.

Don't forget to add two of these for stereo sub as well. Price is in USD so it should be around ~2700 Canadian dollars 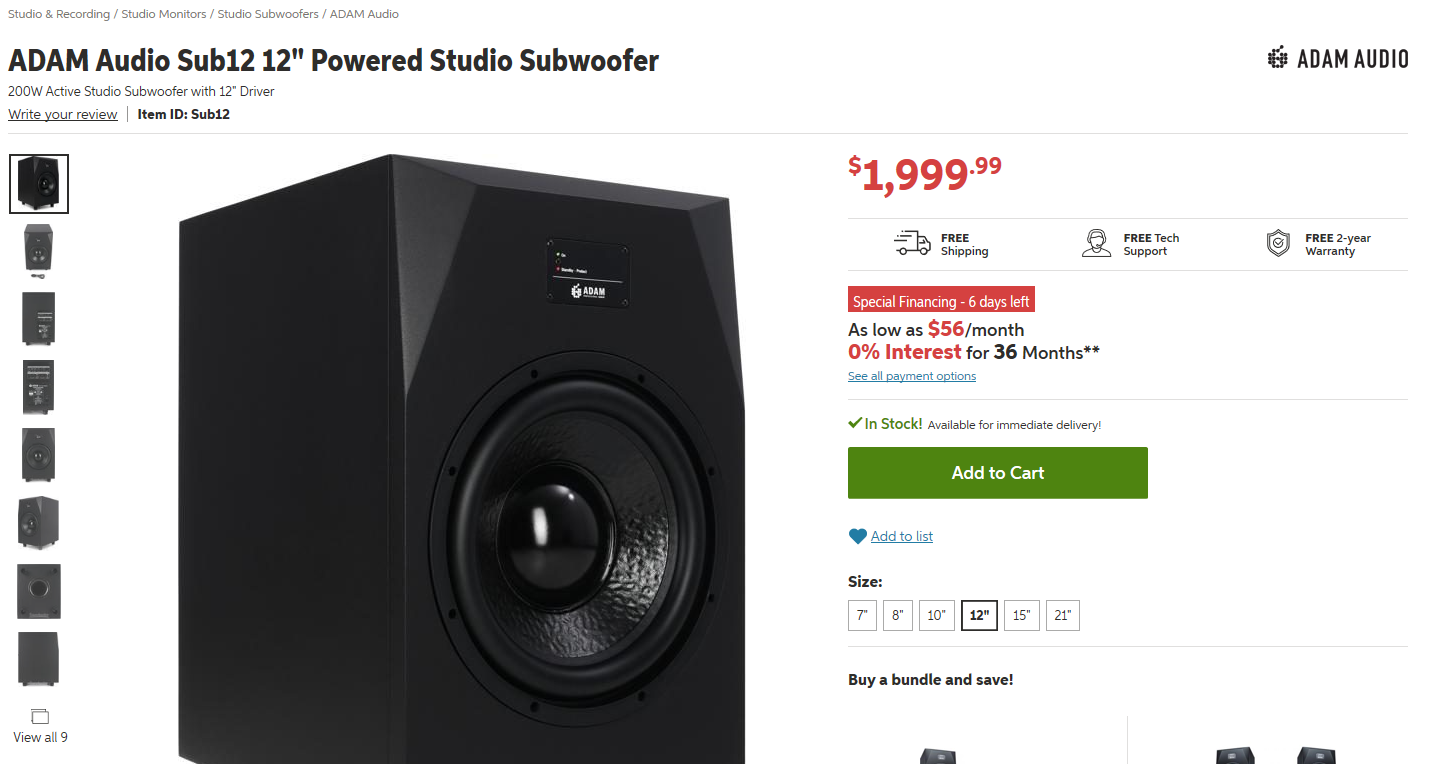 Thanks guys. Corrected the review to indicate price is for one.
Amir
Founder, Audio Science Review
Founder, Madrona Digital
Contributing Editor, Widescreen Review Magazine
Click for My Technical Background
My YouTube Channel
B

I heard the A7X and thought they sounded just fine, but nothing leapt out at me.

amirm said:
Being smart, I put in a random serial number and got through.
Click to expand...

Ehmm, Mr. Modesty, you do realize this is combination of you being smart and they being stupid?

The shelf doesn't really bother me much. The manual does say there is a low and high shelf. Wonder if one of these was engaged during the measurement.
https://www.adam-audio.com/content/uploads/2018/03/adam-audio-s-series-user-manual-english.pdf
https://www.erinsaudiocorner.com/

beefkabob said:
I heard the A7X and thought they sounded just fine, but nothing leapt out at me.
Click to expand...

I was thinking how good can a 7" woofer plus a tweeter sound compared to something larger but then for mixing I suppose they need smaller speakers and these solve many issues, 350 watts amplification each is included, USB PC front end software and a claimed SPL of up to 120dB per pair.
N

The price stings but I'm glad you aren't sacrificing sound quality for it! As is often the case in hi-fi speakers.. Seems like a great speaker. Wouldn't have thought the bass is from compression give where the shelving is. On the wide directivity side of the spectrum while maintaining good control around the crossover.

I'm surprised they managed to cross at 3kHz without a dispersion mismatch despite the large woofer. That's a well-designed waveguide right there. Many dome tweeter waveguides cross an octave lower to match dispersion. Also means the midwoofer is one well-behaved midwoofer. Now I hope we get to see NFS graphs of the HEDD Type 07, with a similar form factor.

mhardy6647 said:
Do "we" think the AMT driver in this monitor is the same as or different than the one in the B652-AIR?

Ilkless said:
I'm surprised they managed to cross at 3kHz without a dispersion mismatch despite the large woofer. That's a well-designed waveguide right there. Many dome tweeter waveguides cross an octave lower to match dispersion.
Click to expand...

Superb review! Expected no less from Adam after using my A7Xs. Incidentally, this industry professional with the credentials below is a unabashed Adam acolyte:

My near-field monitoring experience (from working in other recording studios and ownership of my own) range from ADAM itself, Genelic, Bowers & Wilkins, Yamaha (I still own an original set of NS10m monitors paired to a Bryston amp as part of reference use), Event (still own), Tannoy (still own), KRK (still own), JBL (still own), Meyer Sound, Fostex, and a slew of others I can’t recall from various studios stemming back to the 1990’s. I’ve also done feature film work at a small place called Dolby Laboratories and production work at another small place called Skywalker Sound.
Click to expand...

Ilkless said:
I'm surprised they managed to cross at 3kHz without a dispersion mismatch despite the large woofer. That's a well-designed waveguide right there. Many dome tweeter waveguides cross an octave lower to match dispersion. Also means the midwoofer is one well-behaved midwoofer. Now I hope we get to see NFS graphs of the HEDD Type 07, with a similar form factor.
Click to expand...

Indeed, I'm a fan of well-implemented small/shallow waveguide speakers. No crossover dip in the horizontal data, no bunching and even the vertical isn't too bad, but maintains wide directivity despite needing to cross with a largish woofer.
You must log in or register to reply here.