Doodski said:
I was thinking how good can a 7" woofer plus a tweeter sound compared to something larger but then for mixing I suppose they need smaller speakers and these solve many issues, 350 watts amplification each is included, USB PC front end software and a claimed SPL of up to 120dB per pair.
Click to expand...
Seems it can be pretty good.

This was my monitor. I paid around $4500 CAD for a pair in 2017 very soon after they came out with a discount from a local dealer. The serial numbers show that they were among the first pairs shipped from ADAM.

I set them up for nearfield listening, around 1.5m or so away. Out of the box they were bothersomely bright and forward. To fix that I listened to them about 20° off-axis. I never suspected shelving because of ADAM's specs and my very small "studio", assuming that whatever I saw when measuring in-room had little to do with their true output. Since then I've moved and these speakers haven't seen much use for about a year, partially coinciding with the time I joined ASR.

The best thing about them was the really crisp transient response and imaging, though I couldn't say that initially. Then, when I had first bought them, they sounded very similar to my old A7s. After some moderate treatment using a mix of 12cm to 20cm broadband absorbers and membrane traps on all the walls and ceiling (a lot of you will say this is overkill, but I'd strongly disagree), the imaging and clarity was incredible. In fact it was the best I've heard from any setup. I don't have audiophile friends with really high-end speakers and amateur producers tend to have low-end kit as a fact of life, so maybe I don't have a good reference.

The worst thing was the vertical directivity. No slouching allowed if you don't want the sound the shift. Or, if you do slouch, then set your stands at slouch height.

amirm said:
I know, I know. You think that step deep is because the speaker went into compression. Not so. The levels were already lower than what I use with passive speakers. But to stay on the safe side, I ran the entire ~3 hour measurement at less half the level and got the identical outcome. Levels were extremely low in the second try and the shelving behavior was there. The frequency is too low to have anything to do with directivity. I suspect this is a correction curve applied to the speaker on purpose, hoping that the room gain fills in the rest.
Click to expand...
That shelving thing seems to me to be a raw driver response thing. It's present in many mid-woofers.
I happens when the mass of the cone and the surround don't act together. It's a design choice that some driver manufacturers choose to dampen and others don't. Often it's smoothed out in measurements even by driver manufacturers.
X

pozz said:
This was my monitor. I paid around $4500 CAD for a pair in 2017 very soon after they came out with a discount from a local dealer. The serial numbers show that they were among the first pairs shipped from ADAM.

The best thing about them was the really crisp transient response and imaging, though I couldn't say that initially. Then, when I had first bought them, they sounded very similar to my old A7s. After some moderate treatment using a mix of 12cm to 20cm broadband absorbers and membrane traps on all the walls and ceiling (a lot of you will say this is overkill, but I'd strongly disagree), the imaging and clarity was incredible. In fact it was the best I've heard from any setup. I don't have audiophile friends with really high-end speakers and amateur producers tend to have low-end kit as a fact of life, so maybe I don't have a good reference.

Ah well. Thanks so much Amir for measuring this one
Click to expand...
I knew it! I've viewed your sig before, and have said to myself "that lucky sob!". I've had the Focal Solo6's before, and honestly, I add quite a few absorbers to my room as well, and they never took off for me. I just couldn't get the LF response that I wanted out of them, though the HF's were smooth as silk. Adams were on my list when I was shopping for the Focals, and I should have upped the ante slightly for 'em.

I see your work rig uses 7506's, you find them to be a similar signature as the Adam's? I was thinking they'd be just the opposite from past experience with those cans.
A

From memory the founder/developer of Adam Audio is also they guy who started HEDD which is getting lots of hype (maybe deservedly?)

"We still have a dip though around 200 to 500 kHz so bass performance will still be a bit light."


Man if not for that 200 to 500 khz bass dip. Ruins the ultra-ultra-ultra-ultra sonic treble sound of the bass. Sorry couldn't resist poking a little fun.
You might want to correct that. @amirm

Nicely done review, and looks to be a pretty nice speaker. I'm just eyeballing, but probably a new top of the heap on the subjective predictions score.
Last edited: Feb 14, 2020
T

AudioJester said:
From memory the founder/developer of Adam Audio is also they guy who started HEDD which is getting lots of hype (maybe deservedly?)
Click to expand...
A bit more complicated, ADAM was founded by Klaus Heinz who worked before in German hifi companies like A.R.E.S. and ELAC and Roland Stenz, later Heinz left Adam and founded HEDD while Stenz left Adam and founded EVE, resulting that there are now 3 German studio monitor companies in Berlin which use AMT tweeters.

For what it's worth. I think it may be a difficult speaker in reality. That -30dB dip at 3kHz is at just 20-30 degrees. And it's right in the most sensitive part of our hearing. In reality such crossover dip is audible at 3kHz already at -3dB or so, so at 10-15 degrees vertical angle. In nearfield situations quite easy to move up and down and hear it or get a reflection from a desk / console etc.
And it's a really really nasty sounding thing that I personally hate most. I have experience with it in other studio monitors which have a very similar vertical off-axis. Just put a notch filter at 3kHz to hear the effect. It's terrible. I prefer speakers that cross lower where a crossover dip is less nasty / audible and is at a bigger vertical angle.

And @amirm , for the subjective listening setup I can really advice room treatment.
If I understood your listening conditions correctly the following should make a VERY big difference. A bigger audible difference than between any speakers tested here.
Using Knauf Ecose fiberglass, less dense soft versions (don't know product names in the US) cover the side walls, front wall and slanted ceiling, 20 to 30cm thick (8 to 12inch), simple minimal wooden frame to hold the fiberglas and for putting the fabric cover under tension and cover it with a non-reflective fabric (I use fleece, nice and cheap). This is all non-toxic and cheap (get the Knauf Ecose though otherwise it's dusty and stinky and not so good for indoor airquality).
And then for the open part of your listening space close that entirely with absorbing curtains something like this: https://www.vocalboothtogo.com/prod...ets-sound-absorption-panels-producers-choice/
Proper room treatment like this will make ALL the difference in subjective listening. Only then can you fully appreciate and hear the difference with low distortion etc and hear into the recording better than with any headphones etc.
And the above can probably be done for under $2000.

Any plans to review some Genelec SAM monitors, @amirm? They seem quite interesting with their native DSP correction...
Last edited: Feb 14, 2020

Kacperum said:
Any plans to review some Genelec SAM monitors, @amirm? They seem quite interesting with their native DSP connection...
Click to expand...
None has been offered yet. But I am sure it will come soon enough.
Amir
Founder, Audio Science Review
Founder, Madrona Digital
Contributing Editor, Widescreen Review Magazine
Click for My Technical Background
Master List of Audio Reviews

@amirm With active DSP speakers, do you think a measurement of overall latency/delay would be beneficial? I would expect the pro powered speakers to be pretty good in that respect.

Are there situations where an excessive processing latency would upset any of Klippel's measurements?
Ricky Roma: I subscribe to the law of contrary public opinion... If everyone thinks one thing, then I say, bet the other way...
M

ADAM's are amazing speakers, I've had a pair of Tensor Beta Actives in my setup. Big 3 way 'bookshelf' with about 450W of amplification, these indeed do not run out of power.

At the moment there is a chance to win a pair of these beauties on their website
So it would be great if you could take part in the survey. Among all participants, we are giving away ADAM Audio products worth 4.500 $, including a pair of ADAM Audio S2V and T7V studio monitors as well as SP-5 headphones.
J

Glad to see it measures so well. Happy owner of a S3V midfield monitor here. Wonder if someone will sent in a pair of these.

mhardy6647 said:
Do "we" think the AMT driver in this monitor is the same as or different than the one in the B652-AIR?
Click to expand...
ADAM, Eve and HEDD AMT all are different proprietary designs and not used anywhere else (of course there are chinese copies, even of whole speakers).

Ilkless said:
Now I hope we get to see NFS graphs of the HEDD Type 07, with a similar form factor.
Click to expand...
Unless things have changed since I left HEDD, Type 05 & 07 still run with a bit less than optimum XO and overall alignment. Better test Type 20 & 30 models...

amirm said:
Speaker Distortion Measurements
You can see the true SPL levels in my first measurement presented above:
Click to expand...
@amirm could you please clarify at what level these distortion measurements were taken? 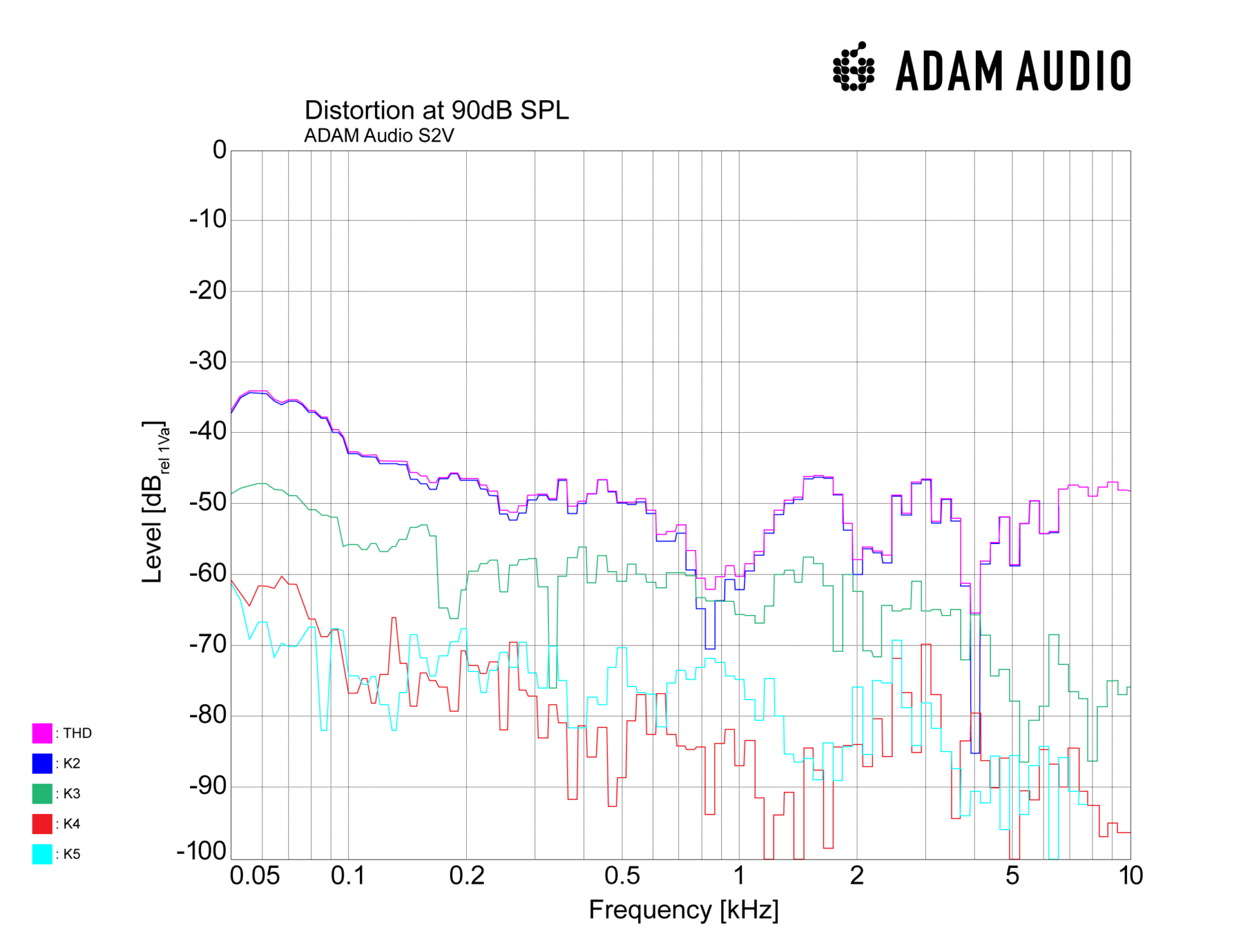 Yours seem to be signifcantly better. I'm just trying to work out if that could be related to the SPL at which they were taken...

The bass driver looks very much like a variant of an Eton hex-core driver. (Basically just an inverted dust cap as customisation.) Eton also make an AMT tweeter, and I bet they custom make both these drivers for ADAM.
Their bass drivers have the usual usual sharp wiggle due to resonance in the surround at about 1.5 kHz. It is very hard to find drivers without this. This won't have anything to do with the 500Hz shelf. What is just plain odd about that shelf is that it is so sharp. The waterfall plot confirms this sharpness, with lots of energy in the decay. 500Hz is pretty much spot on for the baffle step frequency. I wonder if the various compensation curves provided are built around the baffle step frequency (it would make much sense to do so) and the combination of a number of effects is the reson for such a sharp bump.
The night is coming, and its filled with dark surprise.
T

Looks like a decent speaker, perhaps a touch too bright for my taste when i default mode.
M