What is your favorite house curve

I am experimenting with this correction here to see if I like it. The target is vaguely similar to Toole's curve I think. It's a linear tilt of about 8dB from 20 to 20kHz.

Edit: updated with a more recent measurement, applied EQ (no additional manual PEQs added) and remeasured it. Target curve is 0.8 dB/octave from 20 to 20 kHz.

My curve is quite similar to Genelec estimated in room response, only mine extends more in the bass region. But both share about 6dB tilt from 100 to 20kHz. 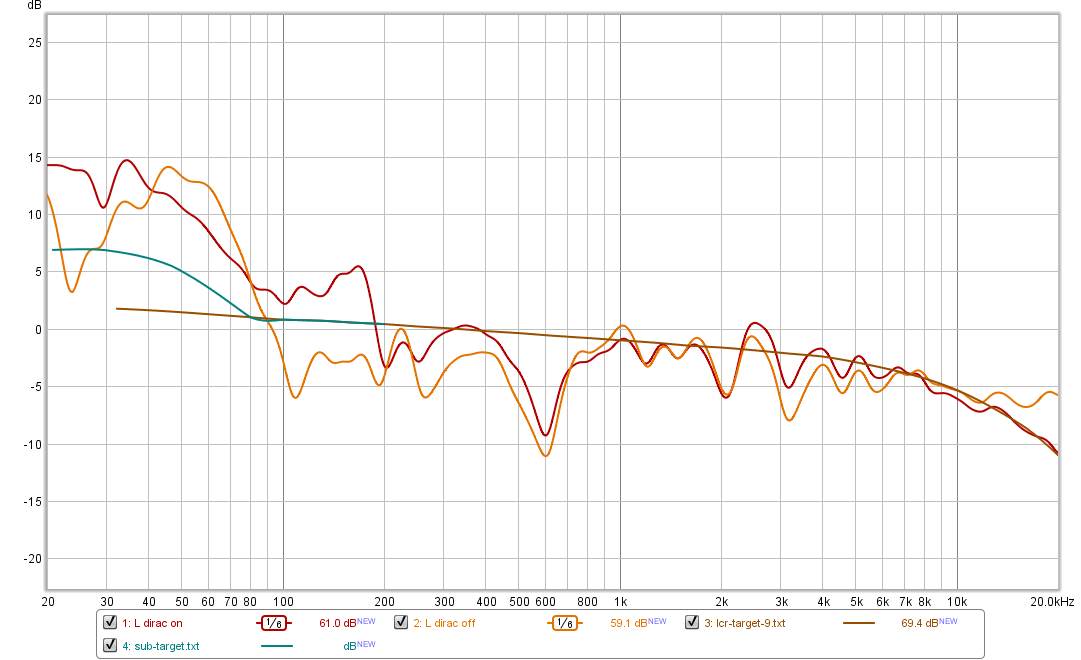 I spent about a week on this and did listening tests with around 20 iterations of target curves, with a specific focus on treble. I didn't spend as much time on the bass, I started with the target curve as shown, which was recommended to me by a user that believed most curves, including the old curves I was running, boost too much midbass which sounds less natural. From there I just increased sub trim by 4-5 dB until it sounded balanced to me, and the result immediately sounded better than any other target curves I've run in the past, including Dirac's default curve and several Harman curves. I had 4 listeners, young and old, verify that the final curve sounded significantly more satisfying and realistic compared to Dirac off, especially in the treble region, in both music and movies.

At first I was tuning the target curve mainly for female vocals, to remove the their edge and make them sound as natural as possible. I had a few test songs and got these to sound good by using a heavy treble rolloff, but the issue was apparent when listening to other genres like rock and metal. With too much treble rolloff, rock and metal loses too much energy and it sounds like everything is submerged underwater. So I adjusted the rolloff to remove the edge from female vocals without dulling rock/metal, and this got me close. But the next issue showed up when I watched movies. Human voice frequencies extend as high as 10 kHz (from 's' and 't' sounds, for example), and with too much rolloff in this region, male and female voices sounded veiled, as if everyone was talking behind a thick curtain. So my final target curve was adjusted to remove the edge from female vocals, but made sure to retain the energy from rock/metal and also keep male and female vocals as clear and crisp as possible. Once I finally reached I target that worked well for all of these cases, I had the results verified by 4 listeners who confirmed a significant improvement in all of these types of material.

I've mentioned in another comment before that most users I've seen have reported that Dirac worked best for them when run full range, despite some theories that assert that EQ should be avoided above the Schroeder frequency. My experience is one of many where customizing the Dirac target curve and giving it a rolloff in the high frequencies, designed specifically to what sounded correct in my room, was absolutely necessary to get all content to sound crisp, clear, natural, and life-like.
Last edited: Mar 7, 2020
You must log in or register to reply here.
Share: Facebook Google+ Reddit Pinterest Tumblr WhatsApp Email Link