This is a review and detailed measurements of the THX Onyx MQA DAC and Headphone Adapter. Company was kind enough to send me one prior to its announcement today. The Onyx costs US $200.

There are a lot of "dongles" out there but the Onyx is the first one to bring good bit of class to the category:

As you see, the device is a bit long but also sleek. An integrated USB-C cable has a large custom strain relief and is made of lovely silicon. Better yet, it has a magnet at the end which mates with the same on the device itself to give a mechanism to wrap your headphone cable around:

I didn't have a use for that but would play with it for hours, attaching and detaching the magnetic latch!

There are three LEDs that show the various status of the device. I didn't care to memorize what they do so I leave it up to you all to figure out.

The Onyx uses the THX amplification module which became famous in desktop configuration. At the time, it broke all records as far as low level of distortion and noise. Interestingly enough, the marketing material talked a lot about its low power requirements (due to lack of need to bias the output stage) but all the products based on it were desktop, powered units. Later, a headphone with the amplification was released but no stand-alone such as we see here. While I did not measure the power consumption, the Onyx ran cool to touch after some use.

THX Onyx Measurements
As usual, we start with our dashboard: 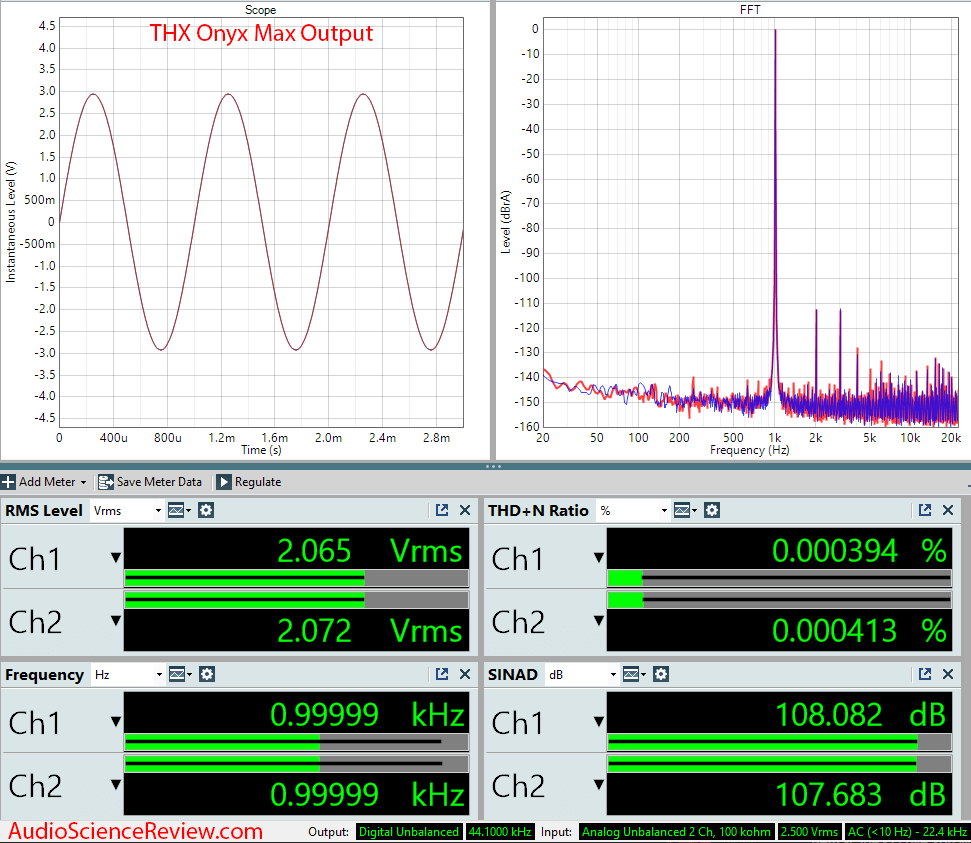 Distortion is at the limit of audibility which is to say it is transparent. With a bit of noise, SINAD slides to 108 dB which while not class leading, is still excellent: 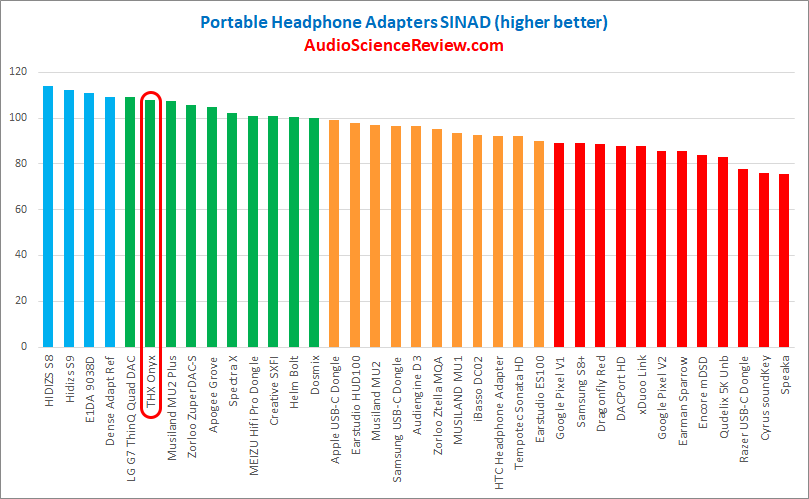 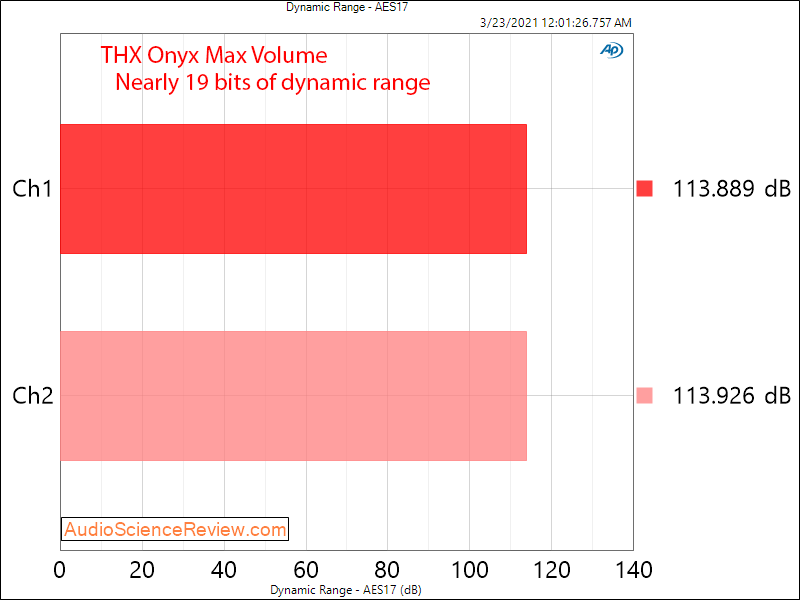 Dongles tend to show a lot of spurious but usually inaudible tones in our jitter test. Onyx is the same although it is much better than many dongle including the free or $9 ones you get with your phones: 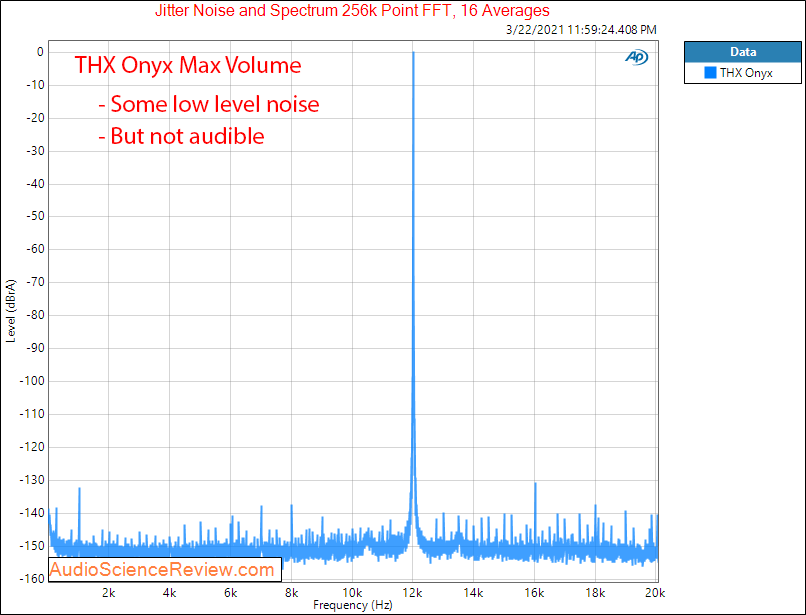 At -130 dB, the spikes are 15 dB better than best case threshold of audibility so definite a problem for the eye but not the ear. 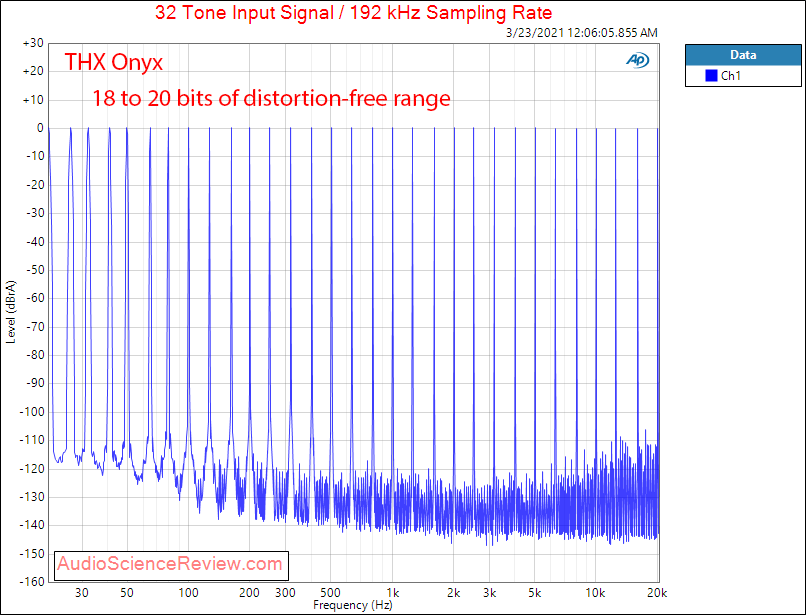 The filter is a rather slow one: 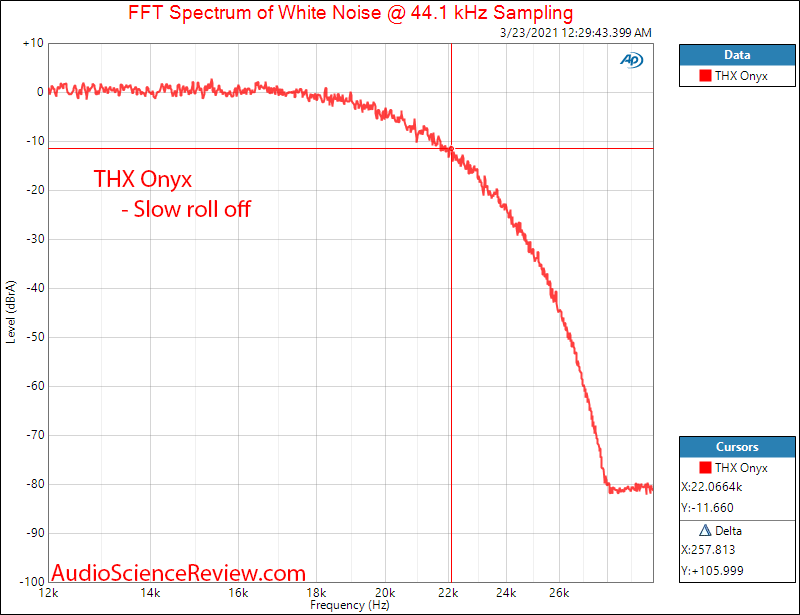 Most important measurement for a portable dongle is not the above but availability of power. So let's start with 300 ohm load: 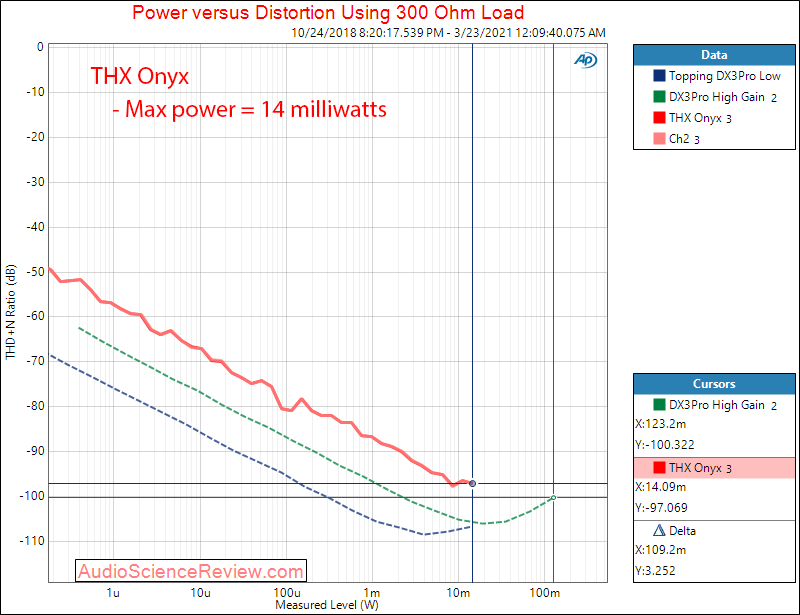 Nice to see no clipping. Output power is limited by 2 volt output which is almost the best we get in this class product without resorting to differential ("balanced") output:

Switching to 32 ohm load though, allows the Onyx to shine more with its high current delivery: 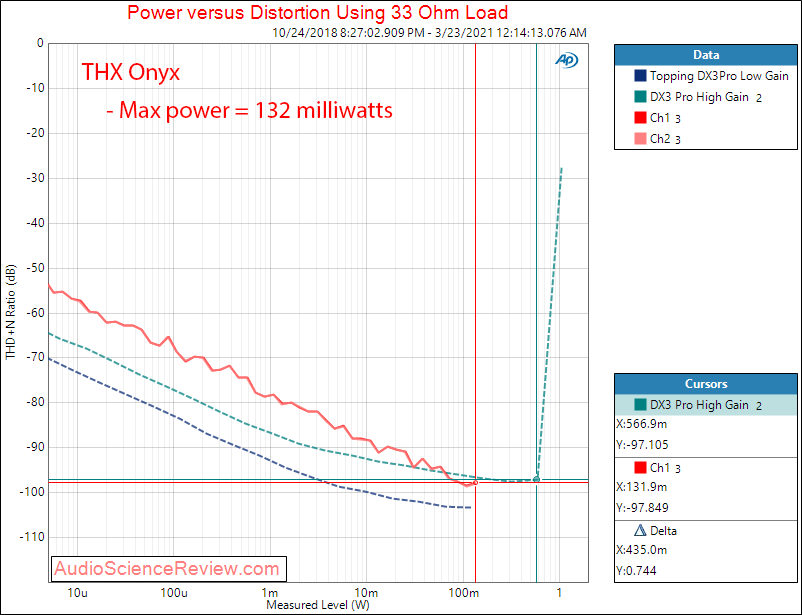 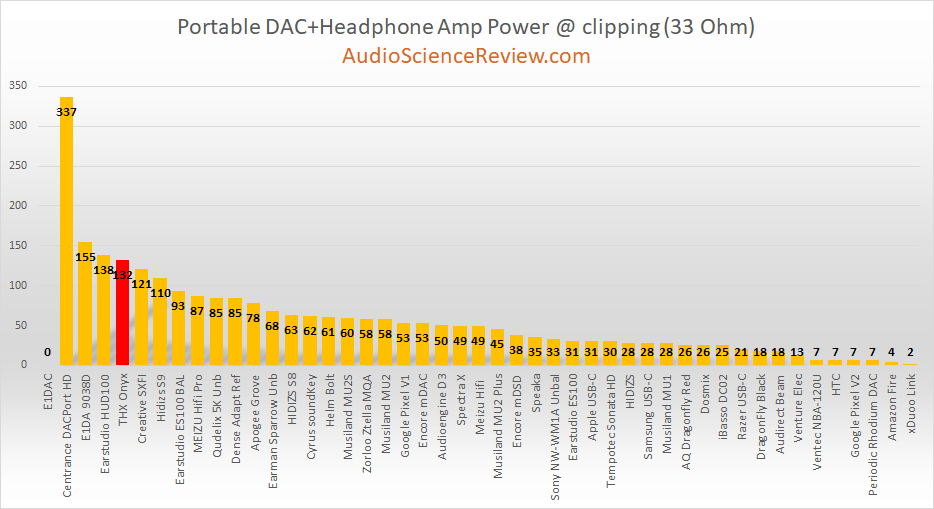 Testing for load dependency we see an amplifier that simply doesn't care (in a good way): 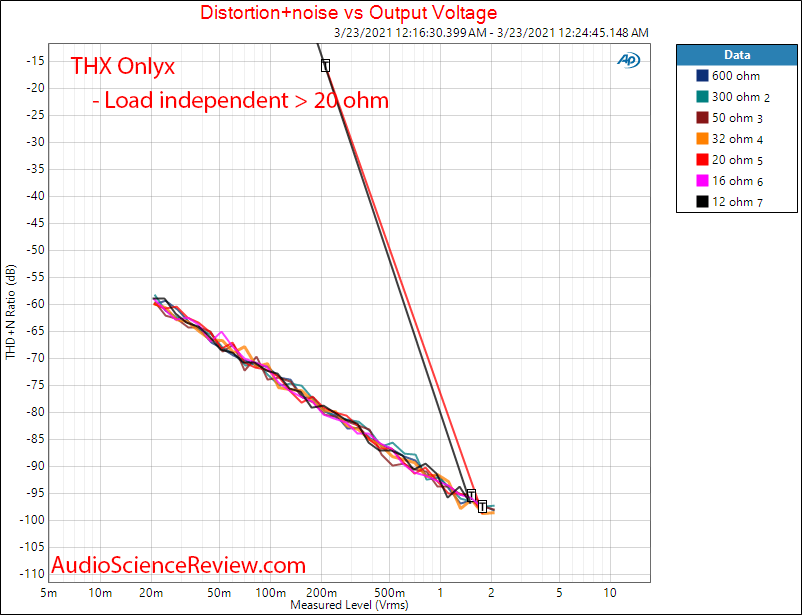 It only goes into protection (tall lines going left) when impedance is at 12 and 16 ohms. Above that, there is no clipping at all.

THX Onyx Headphone Listening Tests
With my Sennheiser HD-650, the Onyx was capable of driving them to very nice loudness with superb fidelity. It is nice to be able to crank up the volume to max and not notice any distortion. For normal listening though, I had the volume down -6 dB (software DSP volume in my Roon player).

Switching to Drop Ether CX low impedance headphone resulted in similar experience. Again, there was no distortion and plenty of volume although maybe a hair less than I had with Sennheiser HD-650.

Conclusions
THX's take on portable headphone adapters is up the industrial and look and feel of the product. And bring it under a much more recognized brand name. Its subjective and objective performance are near or at the top of the class. The only two misses are rather high price of $200 and lack of balanced output for very inefficient headphones.

Overall, I really like the look and feel and execution of THX Onyx and such, I am going to put it on my recommended list.

amirm said:
There are three LEDs that show the various status of the device. I didn't care to memorize what they do so I leave it up to you all to figure out.
Click to expand...

According to the Gizmodo article ...

The Onyx itself will actually let you know the quality of the track you’re listening to with its set of three color-changing LEDs. Blue is CD quality or slightly above, yellow is high resolution, red is Direct Stream Digital (what Sony and Philips used for Super Audio CDs), and magenta is for max quality MQA certified tracks.
Click to expand...

Agreed but people will buy it for the name brand cache and industrial design.
R

Nice... and still small, though it looks large until you look at the USB-C. Some features, as always, come at a price...

BTW I got an idea of a "luxury feature" for ASR: clickable comparison charts? (click on 2-3 items and compare the reviews).
No I'm too "lame" to code it, sorry

respice finem said:
BTW I got an idea for a "luxury feature" for ASR: clickable comparison charts? (click on 2-3 items and compare the reviews).
No I'm too "lame" to code it, sorry
Click to expand...

You and me both! But we are getting to the point where we need custom comparison tool. I will create a new thread for it and see if we can get some volunteers to do the legwork.
Amir
Founder, Audio Science Review
Founder, Madrona Digital
Review Thread Rules
My Technical Background
My YouTube Channel
R

But then again, people sometimes pay 2 times this price for inferior performance.
There is always a group of customers saying "if it's cheap it can't be good", and manufacturers/sellers know it.

Billy Budapest said:
Agreed but people will buy it for the name brand cache and industrial design.
Click to expand...

Why is the 9038S not on the portable sinad ranking chart?

Looking at these measurements i'd still definitely take the E1DA over this.
D

I just saw an article come out on this product and as I was wondering how this will do on ASR testing, come here and see it on the page. Good product launch on their side I guess. Did they have an embargo or release date for reviews?
OP

TheTalbotHound said:
Why is the 9038S not on the portable sinad ranking chart?
Click to expand...

dorirod said:
I just saw an article come out on this product and as I was wondering how this will do on ASR testing, come here and see it on the page. Good product launch on their side I guess. Did they have an embargo or release date for reviews?
Click to expand...

They did. I received the product about 3 weeks ago I think. Embargo was until 7:00am this morning. I believe I was the only technical reviewer to get a product to test this way.
Amir
Founder, Audio Science Review
Founder, Madrona Digital
Review Thread Rules
My Technical Background
My YouTube Channel

amirm said:
I didn't care to memorize what they do so I leave it up to you all to figure out.
Click to expand...

Hahaha nice
Mark text and then reply. It is great, trust me...

amirm said:
I quickly generated that chart last night and it is not an exhaustive list.
Click to expand...

Would it be possible for you to make SINAD and power comparison charts like those you have made for dongle style devices but for battery powered (transportable) gear such as the iDSD micro black label or chord mojo. I think it is the only category missing direct comparisons on this site and such comparisons could be useful.

Strive to be Understood, rather than just heard!

As I recall the Helm Bolt is also THX certified and MQA certified. At half the price. This did better in the 33 ohm test however.

Amir, do you ever rest? Been on one hell of a roll lately. Many thanks
Kind regards,

Because of MQA? (Which is what again? Money-grubbing Questionable Audio?)
You must log in or register to reply here.