In Another Place, someone asked for advice on whether to use a streaming DAC or a USB DAC to connect to a laptop to provide audio for a study/kitchen. Driven by lossy streaming sources.

There was clearly the assumption that the analogue output from PC/laptops/tablets/phones is so bad that it is not really worth considering.

My subjective view (from a cheapskate, non-audiophile point-of-view), is that this isn't universally true. I have used the basic audio output from PC, tablets, phone, etc. to drive my hi-fi, and have generally been happy. I have never done any A/B tests, or any measurements.

I recently connected a Linx 7 tablet (that I bought second hand for £25) to my hi-fi, and was impressed with how that sounded.

I can hear the difference between a good MP3 (EAC VBR0) and the original FLAC (done blind), so I'm not completely deaf.

So I guess the question is: Has anyone done proper measurements on PC/laptop/tablet/phone audio outputs (I did look...)? Are they really so bad that they all need replacing with an external DAC, even when playing lossy format media?

I did some a few years ago but probably could not find the results. The sound card in my old desktop sucked, errr, exhibited poor performance, so I bought an external version that was much better. Mainly for the lower noise floor, less so distortion, though the internal card didn't have enough output (so had high distortion because I was pushing it).

We built a game system for my son years back and the integrated audio was essentially equal to the fancy sound card he bought. So yeah it depends and I have not done any research to see which ones have better audio (my media room PC is my laptop for surfing and SONOS control, not plumbed to the system unless I am running tests).

OTOH, how much quality is needed to hear the music over the mixer in the kitchen?
Don
"After silence, that which best expresses the inexpressible, is music" - Aldous Huxley
C

I'm trying to establish if the enquirer in the Other Place has actually tried the analogue output of their laptop...

Next question will be to see if they have tried feeding a decent media source to their laptop output, and whether they've fed the output into a decent amp and speakers.

Just trying to isolate where their limitation actually lies...

There will always be "some guy" at "another place" saying "stuff".
Don put it best: "how much quality is needed to hear the music over the mixer in the kitchen?"

Connect whatever you have available and if you don't like it, start thinnng about improvements.
An external DAC on lossy source will only get you that far. And even with the perfect speakers (that don't exist) you still end up with a very accurate sound of a lossy source - Hmmm...

As for "Are they really so bad that they all need replacing with an external DAC, even when playing lossy format media?"
On the whole above question the answer is: Of course not.
It depends on the "quality" of the MP3s, the laptop's sound interface, what speakers the laptop is feeding, and the size of the kitchen

I'm sure it's all crystal clear now
This signature: Priceless

I have measured and post a few graphs of my everyday HP laptop in this review thread: https://audiosciencereview.com/foru...of-shozy-alien-digital-audio-player-dap.2058/ As you see there, while it doesn't put external DACs out of business, the performance is quite good. Indeed I have performed countless critical listening tests using it.

My sense, without much data , is that the problem has improved versus years back. Ultimately though measurements are needed to confirm good performance.
Last edited: Feb 23, 2018
Amir
Founder, Audio Science Review
Founder, Madrona Digital
Contributing Editor, Widescreen Review Magazine
Click for My Technical Background
Master List of Audio Reviews

And there are measurements of my Samsung S8+ in that review too: With removal of headphone jack from some phones like Google Pixel 2 and iPhone, the situation will turn into how good the performance of external dongles are. I have one to test that Google sells for Pixel 2. I will measure it at some point.
Amir
Founder, Audio Science Review
Founder, Madrona Digital
Contributing Editor, Widescreen Review Magazine
Click for My Technical Background
Master List of Audio Reviews
C

Dimitri said:
There will always be "some guy" at "another place" saying "stuff".
Click to expand...
I'm trying to be quite politic here... I've tried to gently make the same comments you have:

- lossy compression is likely to dominate any limitations of the audio output
- start with the existing analogue output, fed into a decent system, with decent source material
- see if the audio output of the laptop is good or rubbish

Only then, start looking at alternative external DACs. Of course, if you want a networked renderer, then you'd need to look for an external unit.

As above, my experience with built-in DACs is mixed, but mostly positive.

As someone who believes in evidence-based statements, I thought I'd ask here for the evidence that I suspect will support my experience, rather than the unscientific nonsense that tends to to get repeated in forums like the 'Other Place'...

Sadly, I'm something of a lone voice there, as most of the advice is about spending money on esoteric bits and bobs, rather than actually trying to address the actual issue with a rational series of questions and investigation.
Last edited: Feb 23, 2018

Sadly, I'm something of a lone voice there, as most of the advice is about spending money on esoteric bits and bobs, rather than actually trying to address the actual issue with a rational series of questions and investigation.
Click to expand...
It doesn't sound like a fun place to hang out
This signature: Priceless

Don't have time right now to post graphs. But I've measured a few laptop outs. An older Lenovo T410 is one. Good not great. Plenty good for all except the most demanding purposes.

Dynamic range is the weakest part being 88 db. 1 khz distortion has 2nd harmonic at -97.5 db and 3rd harmonic at - 94.0 db no other harmonics above the noise floors. Twin tone IMD is -93.7 db at the 1 khz difference tone from max with this demanding test tone. You can feed the headphone out with an adapter into a preamp playing it over a home system of good quality and sound isn't bad at all.

Even this several year old laptop can be set to work at 24 bit and all the normal sample rates up to 192 khz.

I don't have measurements handy for a desktop server I have. Has an integrated motherboard sound card. As I recall it was similar to the above laptop. Just a little lower noise floor thru the rear outputs. Similar distortion levels. In general you wouldn't listen to it and declare it bad sounding.
P

Correct me if I'm wrong, but the $0 HP onboard DAC aka "audiophile reviled garbage" seems to outperform Schitt Multibit in that 1KHz test.

It will really be sad and funny if some poor unsuspecting guy went to the usual believer forums asking for an upgrade from onboard PC audio, drank their Kool-Aid only to pay so much more for worse performance. 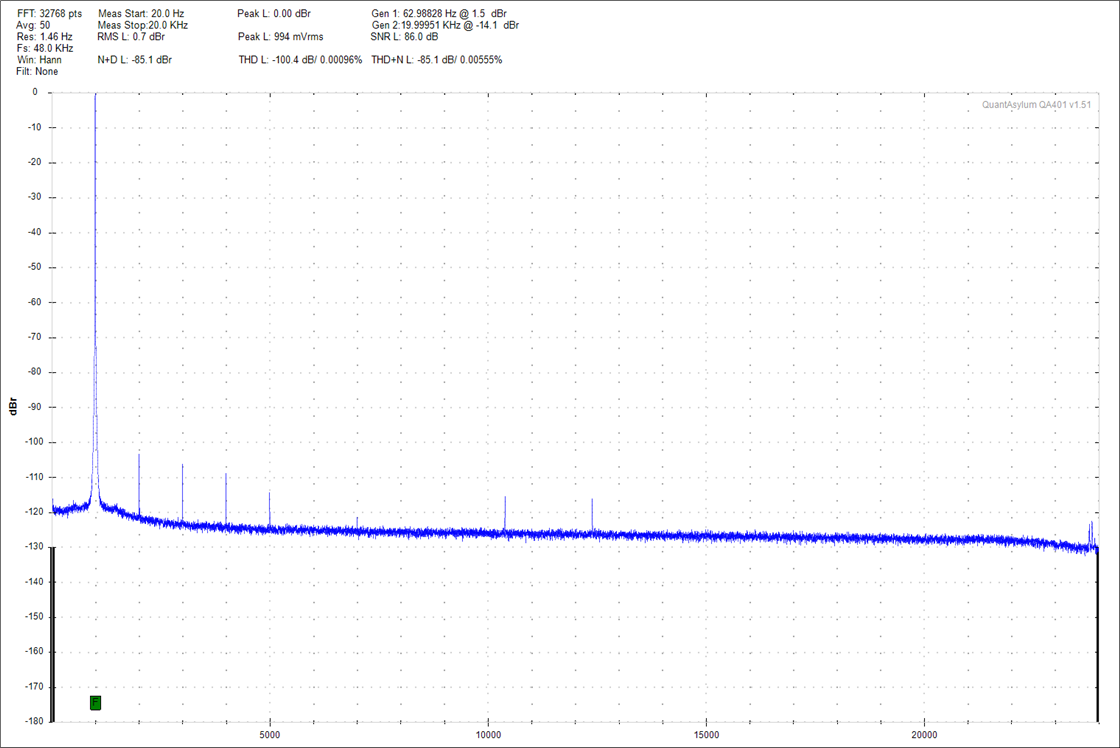 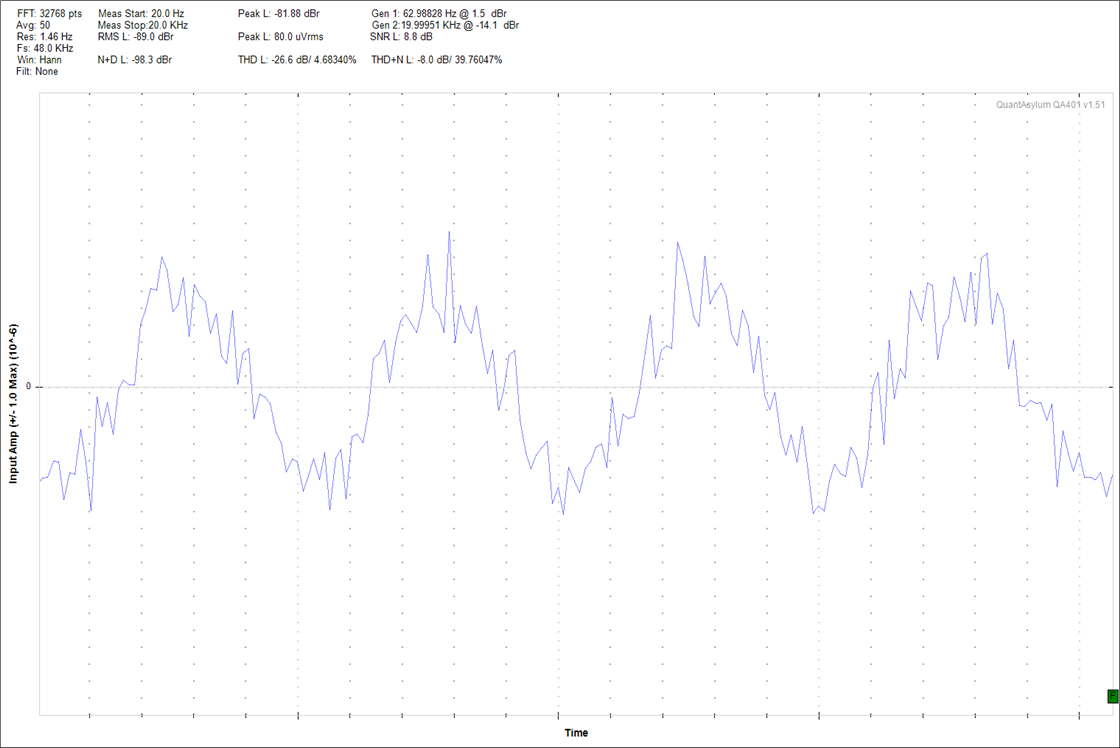 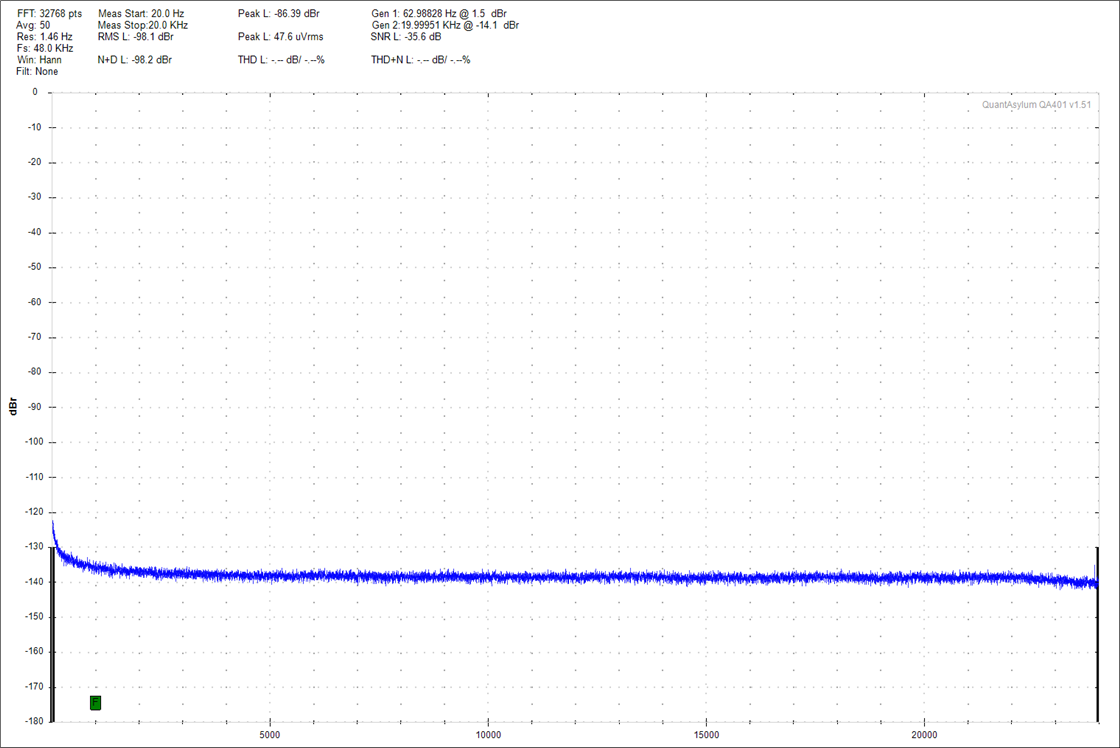 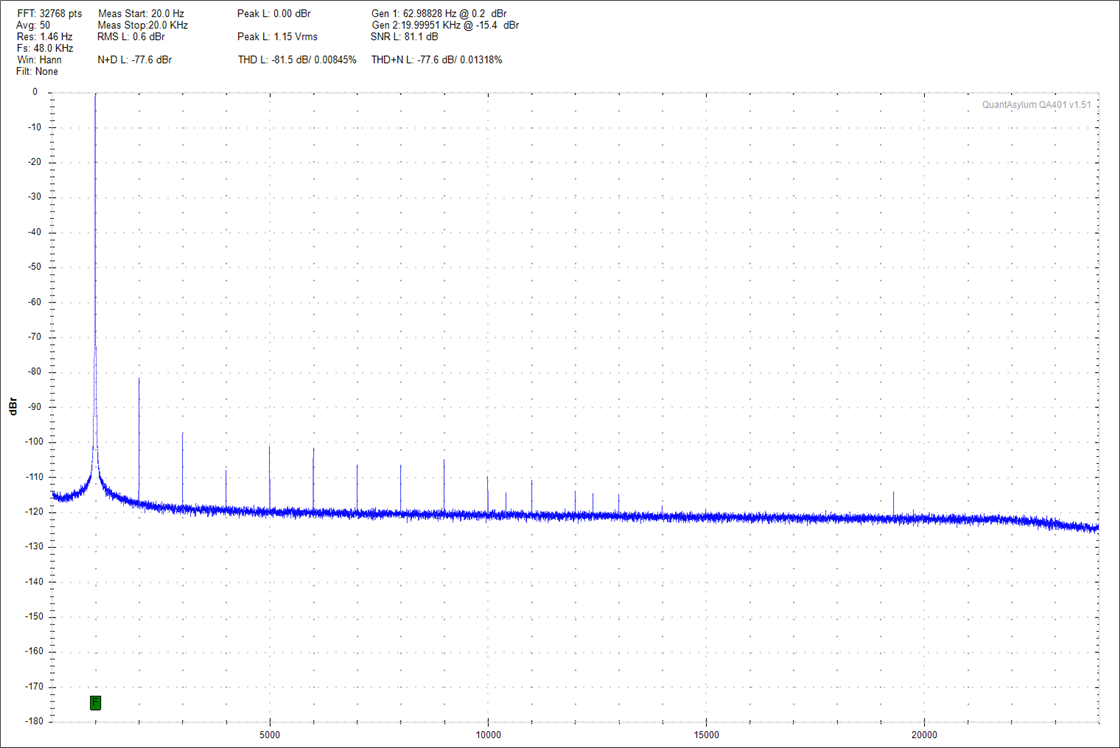 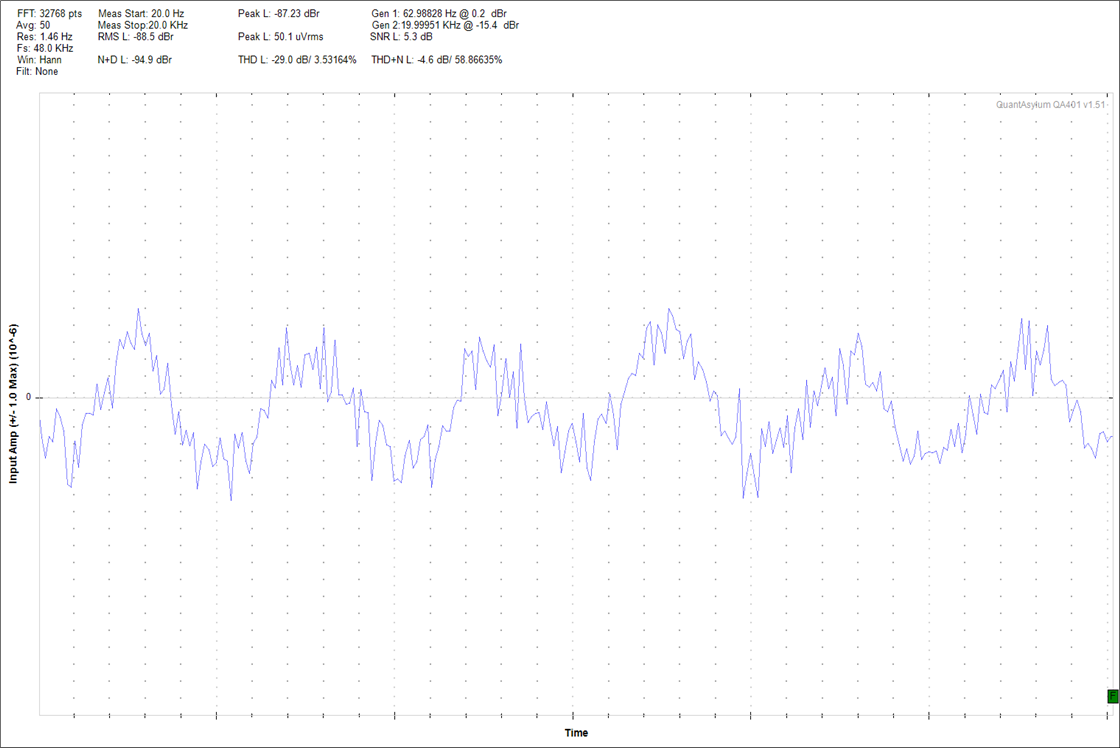 Noise Floor - High with an odd spurious tone at 19kHz 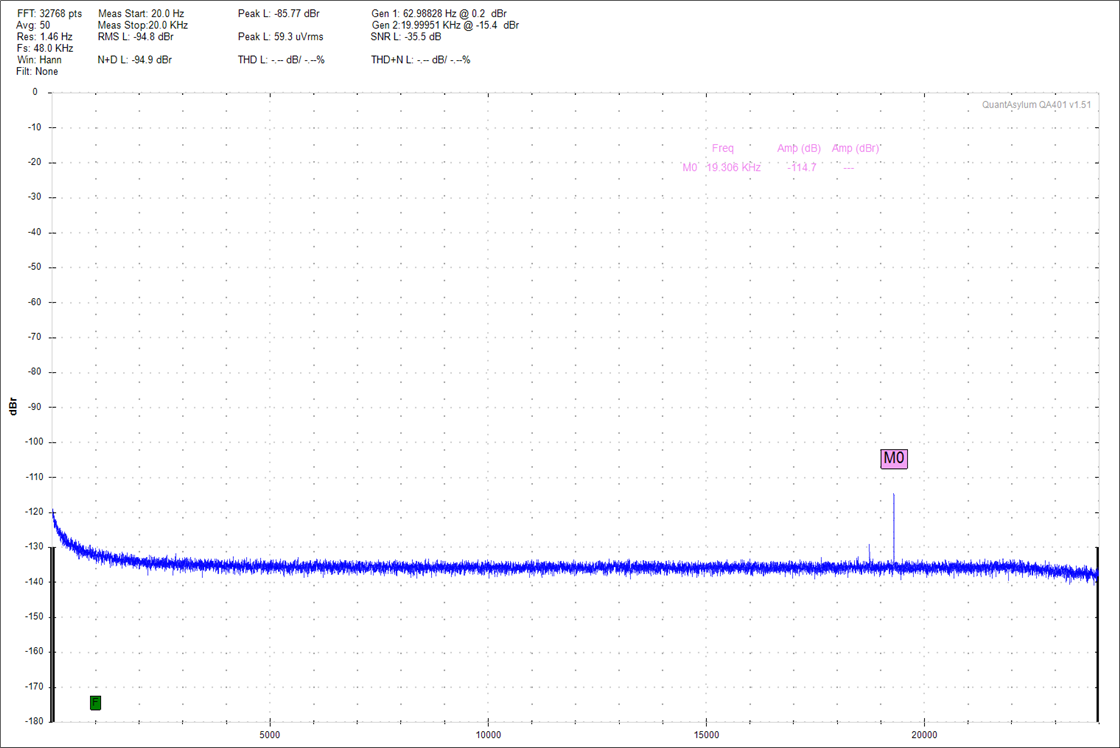 The iPhone 6's DAC measures very well up to the maximum 48kHz samplerate....
...Given the measurements I'm seeing, the iPhone's DAC is excellent and can produce very accurate output.
Click to expand...
Seeing as most DACs (even the ones in 'audiophile' boxes) are standard chips wired up with a few components as per the data sheet, and truly mass-produced devices are likely to be designed by professionals to perform well in terms of EMC, there's no reason that a PC or tablet output shouldn't be getting there in terms of the measurements.
Digital audio is a rare example of perfect technology; it has given audiophiles everything they wanted. But now they're bored...
S 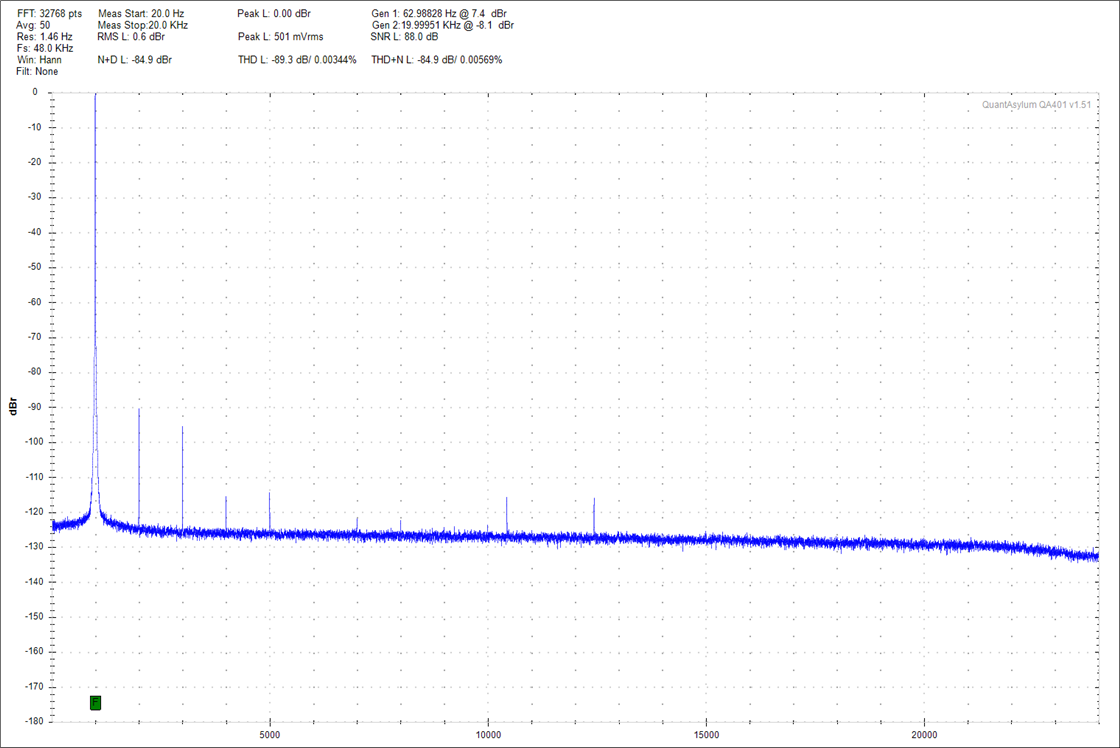 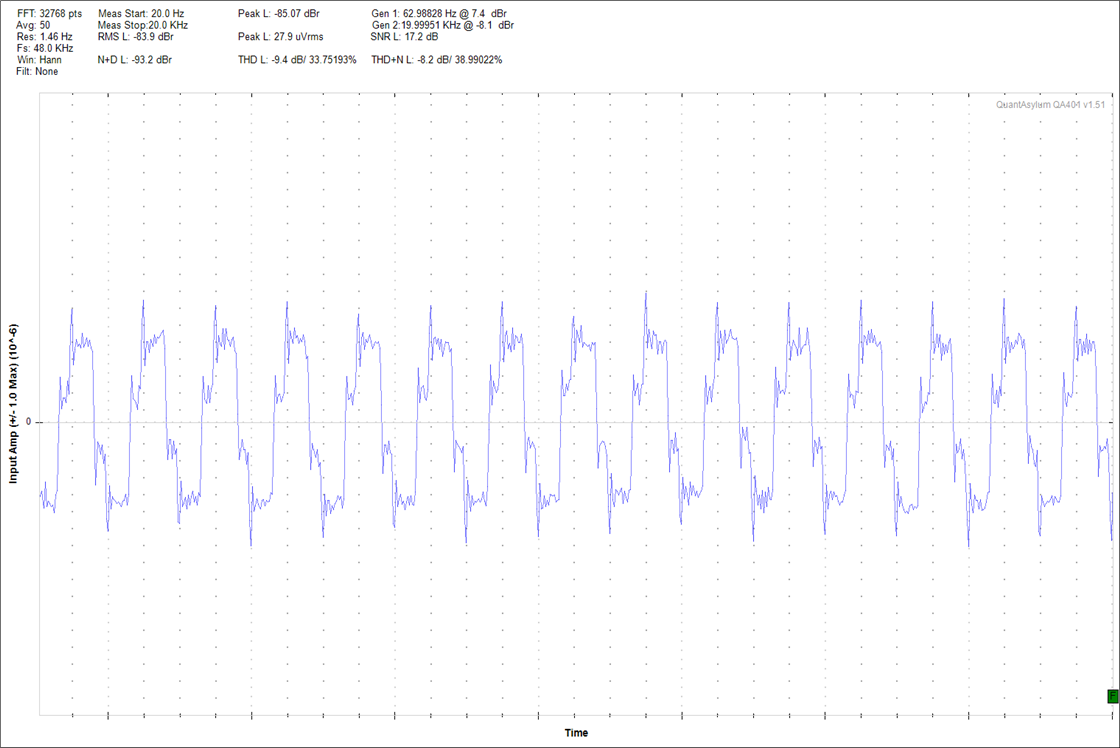 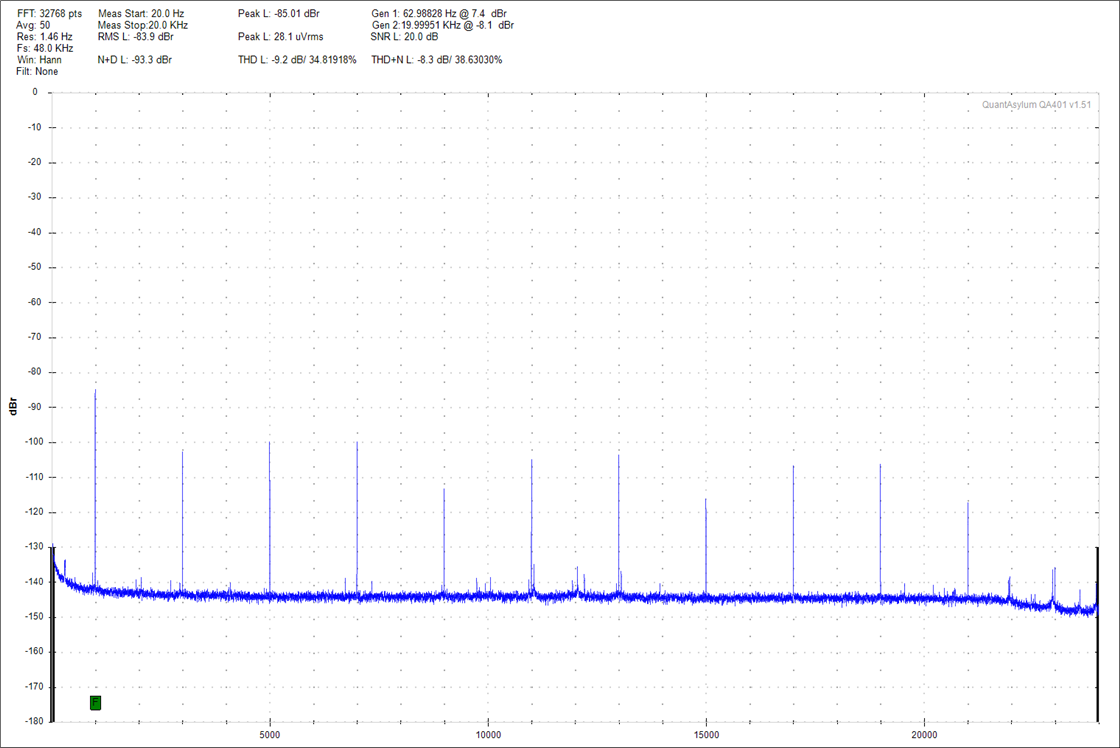 0dBFS - Not too bad distortion but could be better, low output voltage 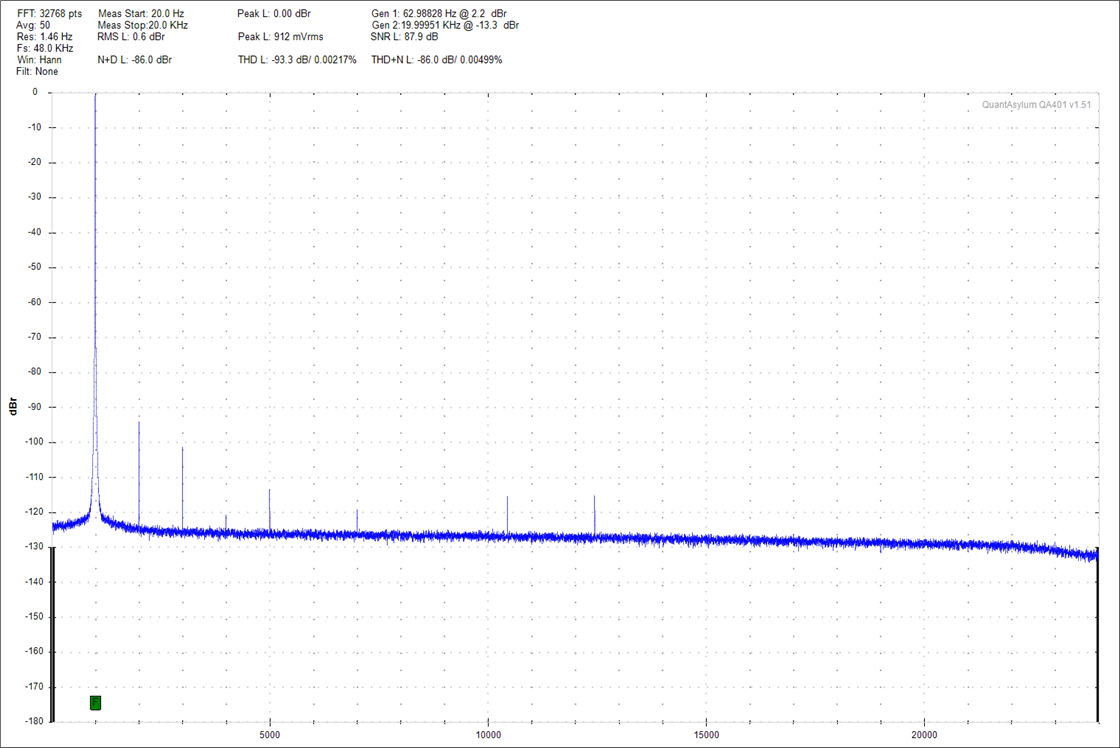 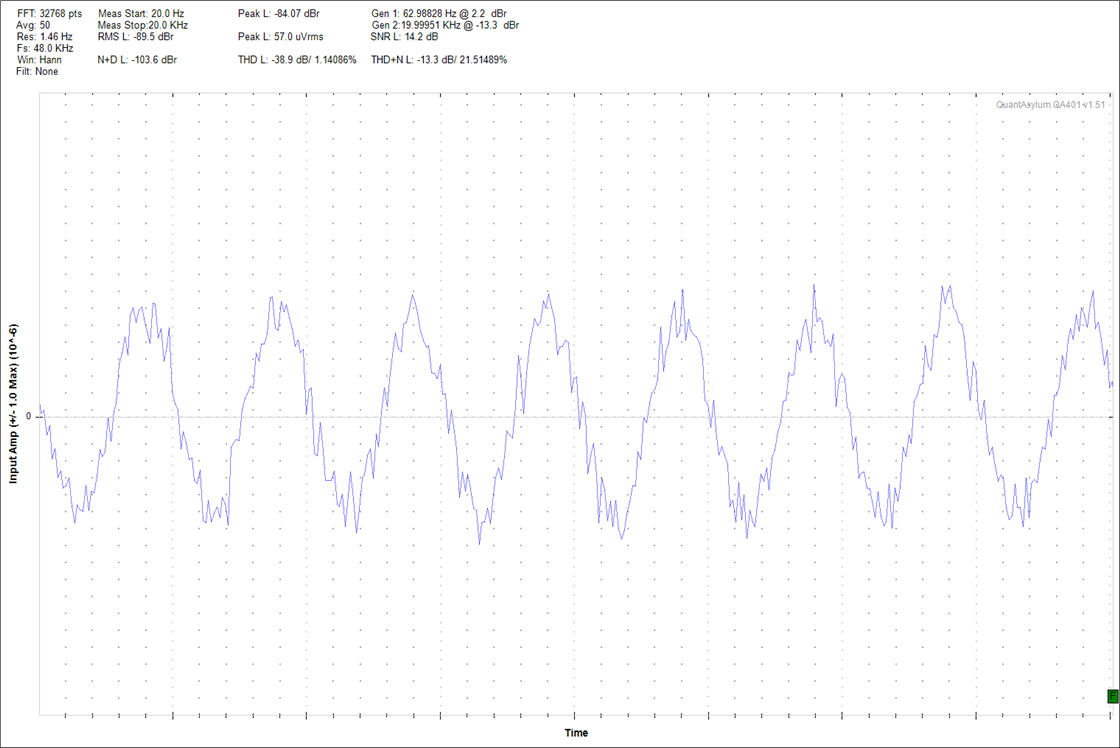 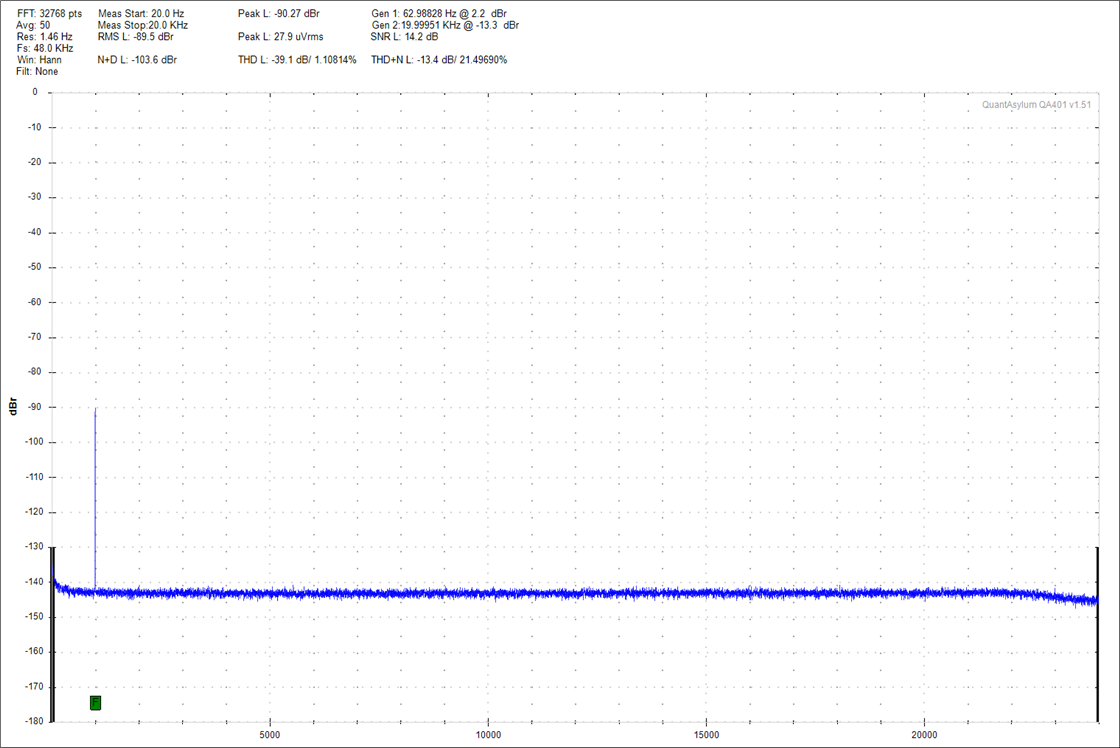 Noise Floor - Not too bad 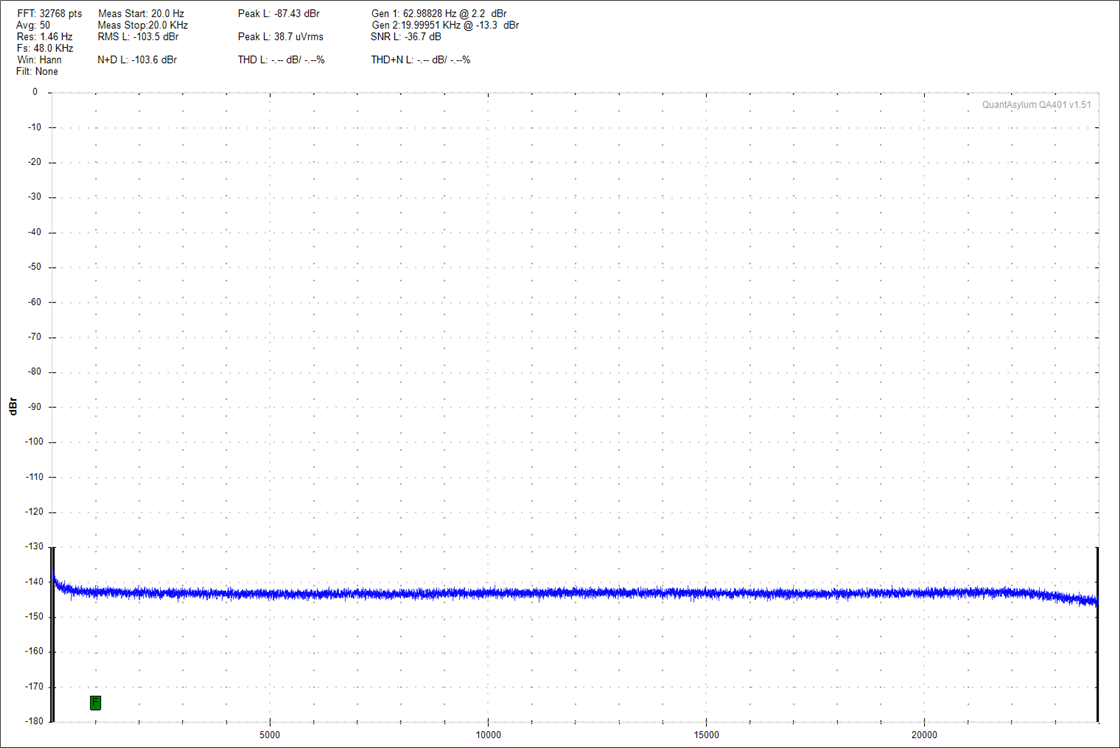 BE718 said:
-90.31dBFS - Not too bad but still fairly noisy
Click to expand...
It would be interesting to compare it to the vinyl version.
Last edited: Mar 3, 2018
Digital audio is a rare example of perfect technology; it has given audiophiles everything they wanted. But now they're bored...

For example, some DAC or other producing a -90dB sine wave from 16-bit data: 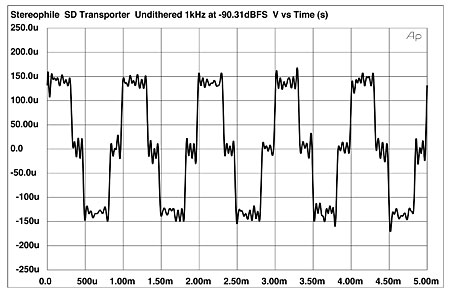 Digital audio is a rare example of perfect technology; it has given audiophiles everything they wanted. But now they're bored...

amirm said:
With removal of headphone jack from some phones like Google Pixel 2 and iPhone, the situation will turn into how good the performance of external dongles are. I have one to test that Google sells for Pixel 2. I will measure it at some point.
Click to expand...
How do you measure the DAC chip on the iPhone earphones...?