This is a detailed look at temperature sensitivity of the ESS ES9038Pro DAC chip as used in SMSL USB DAC. In a separate thread it was shown that another unit had its performance improve with temperature/on time whereas my review sample performed the reversed. I purchased another M500 from Amazon Prime which means it was already in stock in US. It arrived today and I thought I create this separate thread on the performance of the two relative to temperature.

Taking out the PCB is a bit of a challenge but I managed to do so on both. Pulling the PCB out all the way disconnects ribbon cables form front panel which I have not figured out how to open yet! So I left the review sample (bottom) half out with cables still attached and the new retail version (top) fully removed: 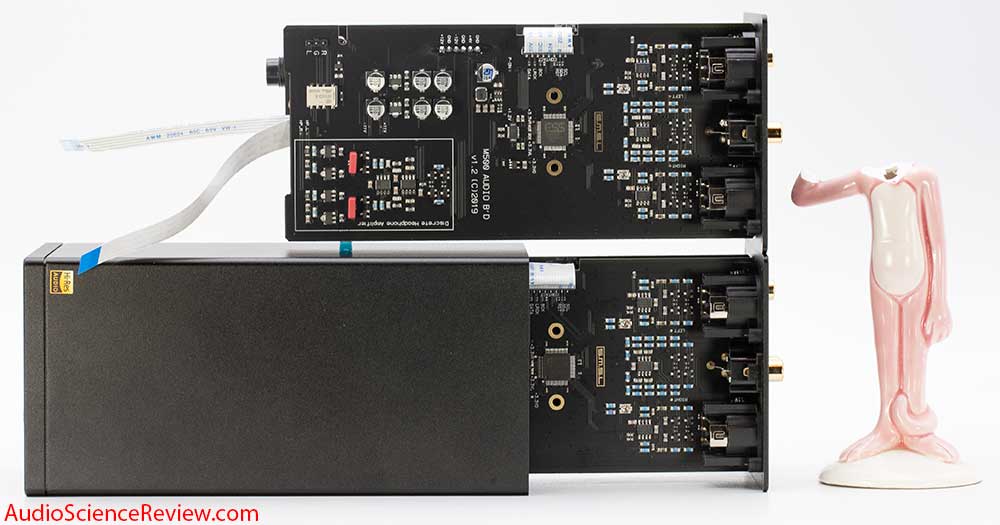 Both PCBs look the same to me and both have the same version 1.2 indicated on them. The DAC has two boards but the top one is of interest to us since it has the ESS DAC chip and output stage.

Here is a higher resolution shot of the retail version (click for larger image):

Review Sample Thermal Analysis
Here is the performance of the original unit I received from SMSL as it warmed up (volume set to 34 which equals 4.2 volts output from XLR jacks): 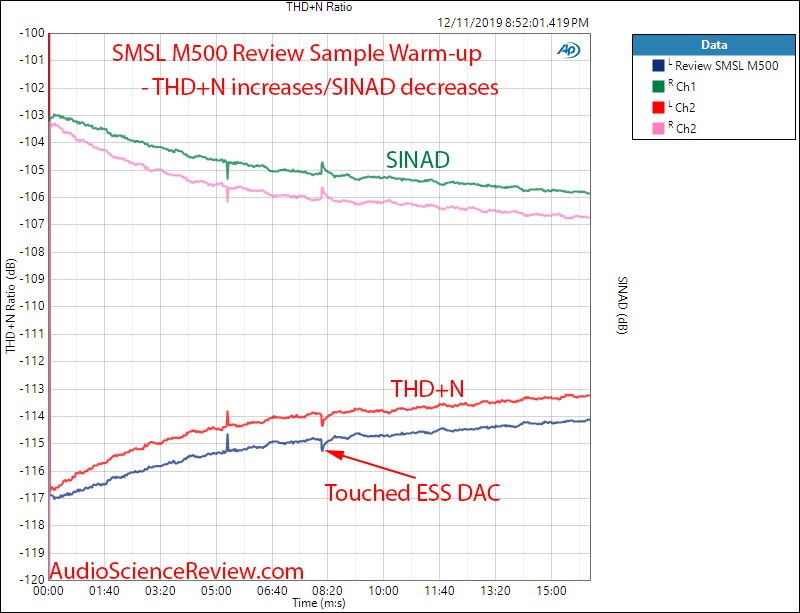 Top set of lines are SINAD and bottom are THD+N (identical values, expressed in dB or percentage respectively). Sorry the SINAD scale got chopped off. A bug in AP software. So let's focus on the THD+N (red and blue lines). We can just convert the dB value to positive and get SINAD. We start with 117 dB SINAD which is what I reported in the original review. As the unit warms up we lose 3 dB to finish around SINAD of 113 dB.

Half-way through the test I touched the ESS DAC chip to see how warm it was. It was not hot at all but my touch was enough to cool it momentarily causing performance to improve. This pointed to very high sensitivity to temperature variation.

Next, I sprayed some component cooler on the ESS DAC. The results were dramatic: 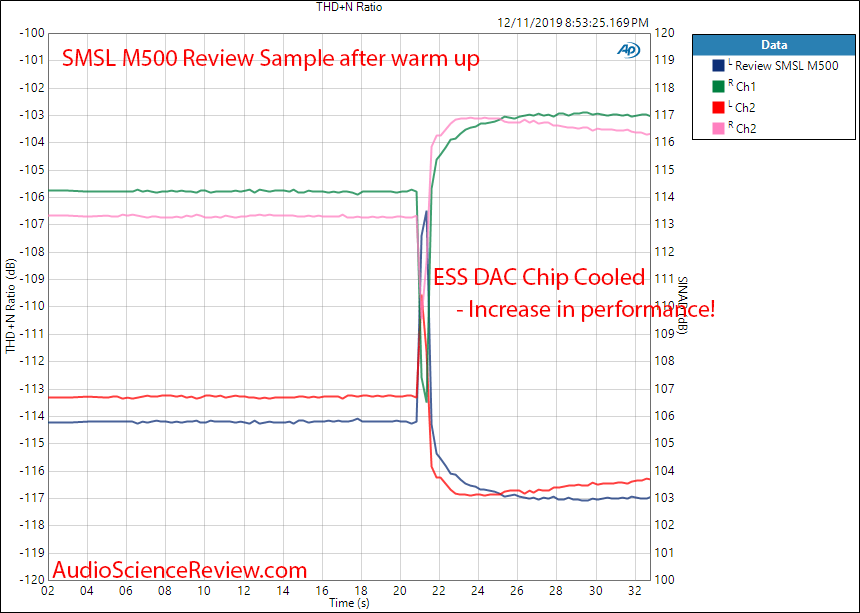 Performance immediately shot back up to SINAD of 117 dB. So no question, my review sample likes to be cold to produce its best performance.

SMSL M500 Retail Sample Thermal Performance
I repeated the same warm up test on the retail version of M500. This time as we explored in the other thread, performance actually improved with warm up (first part of the graph to the left): 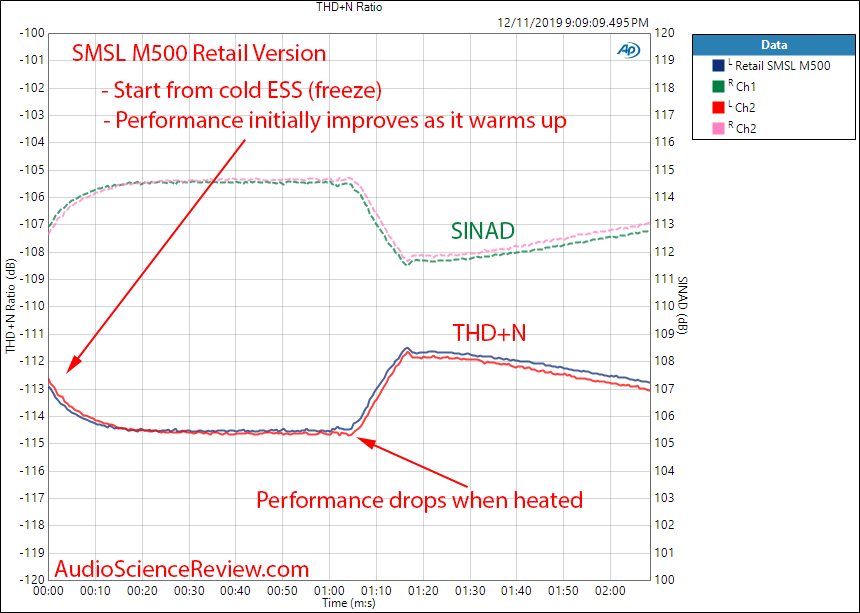 Next I pulled out the big guns literally in the form of my wife's hair dryer. As soon as I warmed up the PCB performance suffered good bit (more than 3 dB). I stopped the hair dryer and as the unit cooled off performance started to improve.

What this means is terrible: there is a narrow temperature range where the ESS DAC in this implementation performs its best. We saw an attempt by Sabaj to deal with this in the D5 whereby they put a heatsink on the ESS DAC chip. This reduced power up performance but allowed temperature to stay low enough within the good performance range of the ESS DAC.

Sensitivity of other components
I cooled off the output OPamps and they made no difference whatsoever. So the sensitivity is definitely in the ESS DAC chip. Note however that this may be circuit dependent.

Conclusions
As with "ESS IMD Hump," ESS seems to be doing a terrible job of providing a stable reference design for designers to use. They are left to deal with these issues on their own. Having a chip lose 3 to 4 dB of performance with 10 to 20 degree temperature change is just unacceptable.

It remains a mystery why the sample I have works in reverse. It may be that it is a DAC chip that is working above its spec when cold and only degrades when it gets colder.

With respect to retail samples however, we collectively have tested three of them with similar performance. While I don't think the above changes are audible your DAC will perform better after a few minutes of warm up. Keep it away from other sources of heat however as that seems to have the reverse effect. If you live in Florida, I suggest you move somewhere colder!

I will have either my retail sample or the review sample for sale soon. Start a conversation with me if you are interested in either one. I don't like to return things to Amazon for such use.

amirm said:
As with "ESS IMD Hump," ESS seems to be doing a terrible job of providing a stable reference design for designers to use.
Click to expand...

Speaking of which, does your retail unit have the hump back, as @WolfX-700 one?

Edit: Seems his second one (retail) performs as well as your original sample:

VintageFlanker said:
Speaking of which, does your retail unit have the hump back, as @WolfX-700 one?
Click to expand...

Will have to test. It is out of commission right now until I figure out how to put the ribbon cables back in!
Amir
Founder, Audio Science Review
Founder, Madrona Digital
Contributing Editor, Widescreen Review Magazine
Click for My Technical Background
My YouTube Channel

@amirm, please please a fan heatsink on each DAC chip and re-test. OPPO Sonica has it on top and I've seen other manufacturers doing the same on these chips.

ES9038PRO are power hungry chips and cooling them down will improve the performance over time. For a simple test, even standard 3M very thin double-sided tape should do, but on a long run some double-sided thermal adhesive would be better.
Last edited: Dec 12, 2019

Thanks for posting this Amir, some more food for thought. Would be interesting to see how other ESS9038 implementations handle the heating curve. Between this and the hump, the AK4499 is looking more and more tempting

The perfect subjective testing DAC. Listen tell us if your music improves with warm up, worsens or stays the same. We'll measure it afterward and see which is true for your particular unit.

And I think few places would have found something like this much less document it more thoroughly. DIYaudio forums might have done something like this.Love the effect of finger on the DAC. Hair-shirted types would run it naked and keep a finger on it. Provides thermal and vibrational dampling plus improving the signal plus plus giving you that warm fuzzy feeling.

This DAC needs a peltier on the DAC chip. A possible tweak that really works.
OP

amirm said:
What this means is terrible: there is a narrow temperature range where the ESS DAC in this implementation performs its best. We saw an attempt by Sabaj to deal with this in the D5 whereby they put a heatsink on the ESS DAC chip. This reduced power up performance but allowed temperature to stay low enough within the good performance range of the ESS DAC.

As with "ESS IMD Hump," ESS seems to be doing a terrible job of providing a stable reference design for designers to use. They are left to deal with these issues on their own. Having a chip lose 3 to 4 dB of performance with 10 to 20 degree temperature change is just unacceptable.
Click to expand...

I knew the hump couldn't be the only blunder here. This is what you get when you have no technical specification sheets for your product. Maybe they exist in some form for clients, but idk.. Someone ought have leaked the details by now.

Here's what I said also earlier today, and I still feel the same..


Tks said:
Man, ESS blunders with their hump issue, and now we start seeing their stuff needs a certain temperature to run at highest performance.

They really are leaving a pretty meh impression with their chips tbh.. It's that whole idea of "if you're letting these sorts of blunders slide through to production units.. what else could possibly be up with your chips?" I guess we see now. SMSL has nothing to do with this, the specs are all valid, the ESS performance is valid. Now if only they would publish nominal operation temperatures, or temperatures past the point of failure, like many other electronic parts makers. Just because the chip runs at it's best performances at those temperatures, doesn't mean those temperatures are actually good for the physical aspects of the chip itself.

I'm still on the side with Sabaj that heatsinks ought exist on any parts producing such concentrated and localized heat for the sake of not having parts stressed from constant and quick thermal shifts. I only say this in the absence of ESS's annoying stance of not providing technical papers for their products.
Click to expand...

Until then nonetheless though.. I'd slap on heatsinks as I would on virtually any other part producing such concentrations of heat on such a small surface area. If not for performance, simply out of precaution for not having the faintest of clues if operation at those stable temps are causing some sort of degradation over long periods of time.

Regarding teardown, I guess we still need to peel off the plastic plate on the front of the monitor.

Sorry I did n’t take it apart, because after I verified that it was just a temperature stability issue, I chose to return it to the dealer to reduce the loss of money.
The truth is within the measurement range of APx555B

Did they skimp on the heatsink? I see the mounting holes.

I'm a little confused. According to the datasheet of 9038pro, the operating temperature is 0 to 70℃. Maybe we need to make a figure, with the abscissa for the temperature and the ordinate for the performance.
H

If heatsink is needed cab anyone recommend a good one to stick on top of 9038Pro?

So... how the actual performance of M500 should affect its place in SINAD master index? I believe it shoud be shifted down...
OP

gvl said:
Did they skimp on the heatsink? I see the mounting holes.
Click to expand...

Alerma said:
So... how the actual performance of M500 should affect its place in SINAD master index? I believe it shoud be shifted down...
Click to expand...

I will be retesting the retail version once I get it working and update the table.
Amir
Founder, Audio Science Review
Founder, Madrona Digital
Contributing Editor, Widescreen Review Magazine
Click for My Technical Background
My YouTube Channel
OP

A little bird share the data sheet for ESS ES9038Pro. There is not one performance graph in there in my quick look!
Amir
Founder, Audio Science Review
Founder, Madrona Digital
Contributing Editor, Widescreen Review Magazine
Click for My Technical Background
My YouTube Channel

Using your heat probe, do the 2 units get to the same stable temp after being left on for an hour?
OP

I felt both DAC chips using my finger and they were the same: barely warm playing 24 bit 44.1 kHz PCM.
Amir
Founder, Audio Science Review
Founder, Madrona Digital
Contributing Editor, Widescreen Review Magazine
Click for My Technical Background
My YouTube Channel
You must log in or register to reply here.