This is a review and detailed measurements of the Essence HDACC II-4K HDMI and USB DAC. It is on kind loan from a member. It costs USD $699 from company's website although it is on sale currently for $599.

For years, I have been looking and asking DAC manufacturers to include HDMI input in their DACs. As many of you know, HDMI is the standard delivery format for digital video. Without HDMI input, you cannot listen to the advanced, multi-channel audio formats on such platforms as Blu-ray Disc and its UHD version. When there is a HDMI input on some DAC, it is for PCM only and no compressed format is offered. Essence solves fills this much needed gap with their DACs with HDMI input. Both Dolby True-HD and DTS Master Audio HD are decoded internally allowing you to feed the native bitstream to it.

It includes all this functionality plus balanced output and analog input plus headphone out in a very small and attractive enclosure: 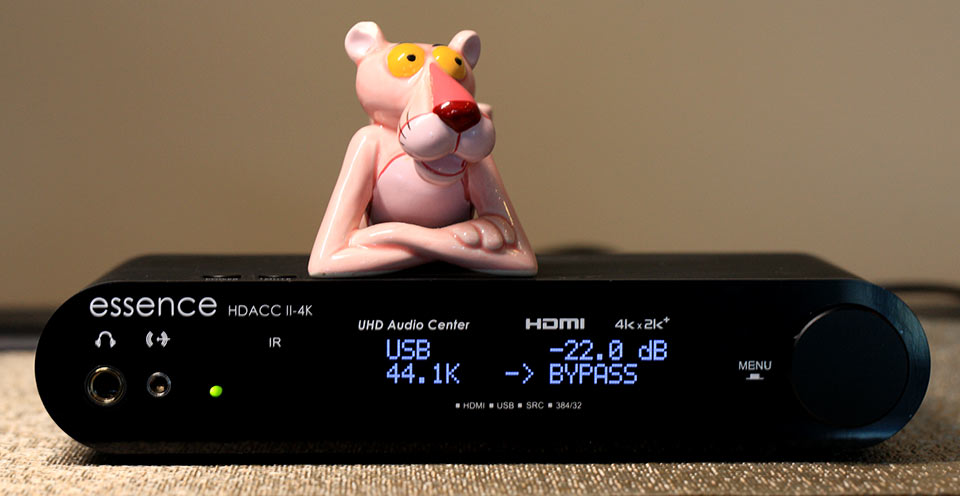 As the model indicates, support is provided up to 4K resolution. I had no trouble routing my PC's HDMI connection through the HDACC II-4K and then connecting it to my 4K BenQ monitor.

As you can see from the IR label a remote is provided.

The display is ultra clear OLED with excellent set of information. Volume can be set to be fixed at any level or variable using the rotary control. For my testing, I set it to max except for headphone listening tests.

There is a mute button with soft on which was nice.

The back panel shows the very useful set of inputs and outputs:

You have four HDMI inputs which is great. Importantly, there is pass-through output so you can siphon off the audio and let the signal pass through otherwise.

I am a fan of XLR balanced outputs which can really become handy in video application because some cable and satellite set-top boxes have their own grounds which is a recipe for ground loops.

Unusual but highly appreciated is the screw on 5 volt external power supply connector.

The outside paint is the matt chalky finish which has become popular recently. It does not feel that good to touch and shows smudges although was easy to wipe off.

DAC Audio Measurements
As mentioned, I ran the HDMI cable from my PC workstation to the HDACC II-4K and then to my monitor. I then used the Nvidia graphic card's audio interface to play content it which worked like a charm. This is our dashboard view using this setup. The 1 kHz test signal is playing using Roon media player: 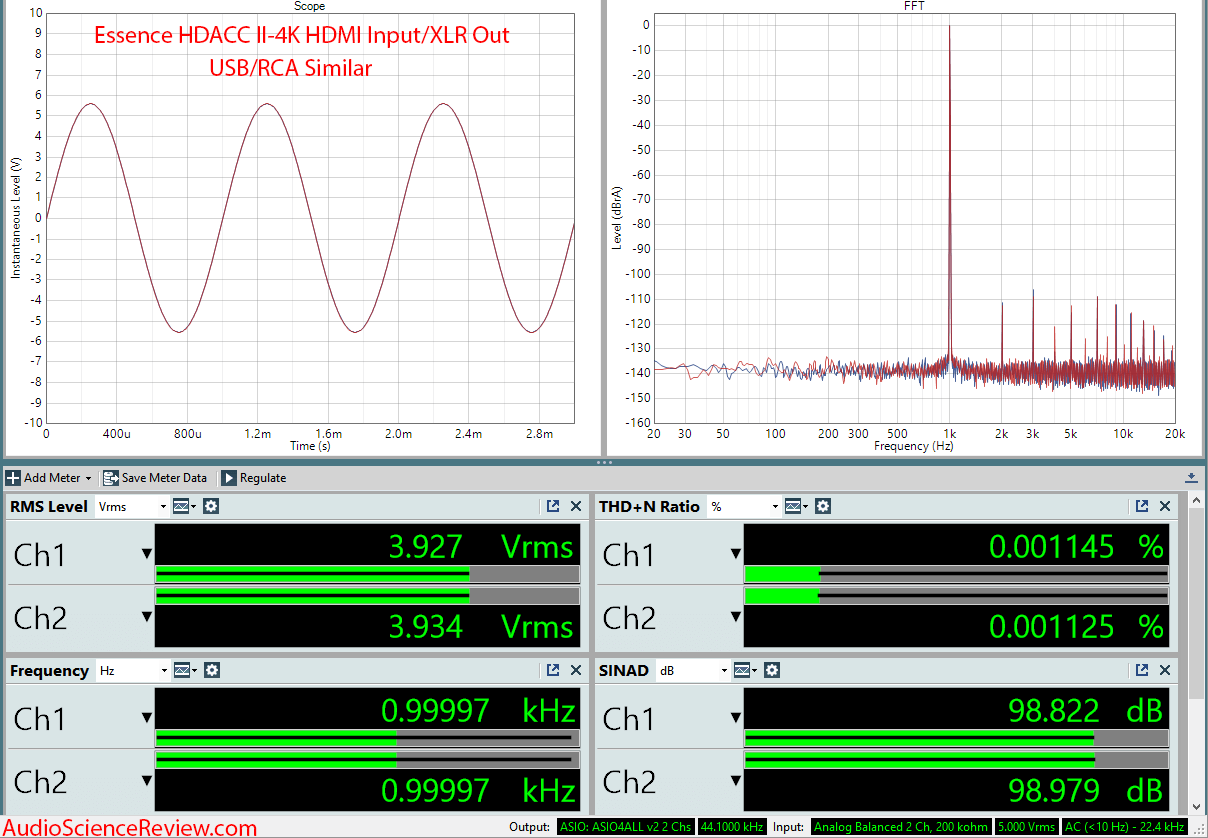 The output is essentially 4 volts which is what I like to see. Distortion and noise in the form of SINAD rating would fluctuate a bit and reached 100 dB occasionally. Most of the time it hovered around 99 dB as you see above. That places the HDACC II-4K at the top of our tier 3 category of DACs:

For the remaining tests, I had to use the USB input as my Nvidia graphics card audio interface has no ASIO support for my analyzer and doesn't work with ASIO4ALL either. 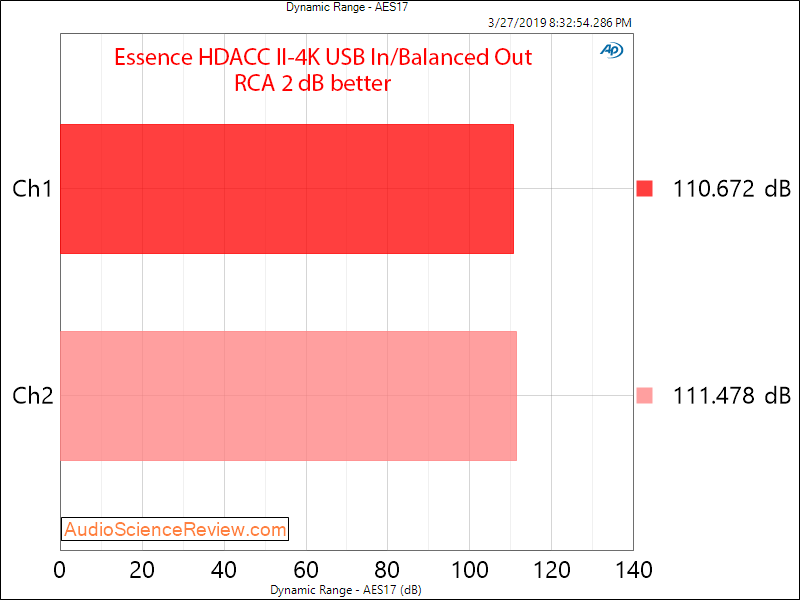 Jitter and noise is higher than I like to see in DACs in this price range: 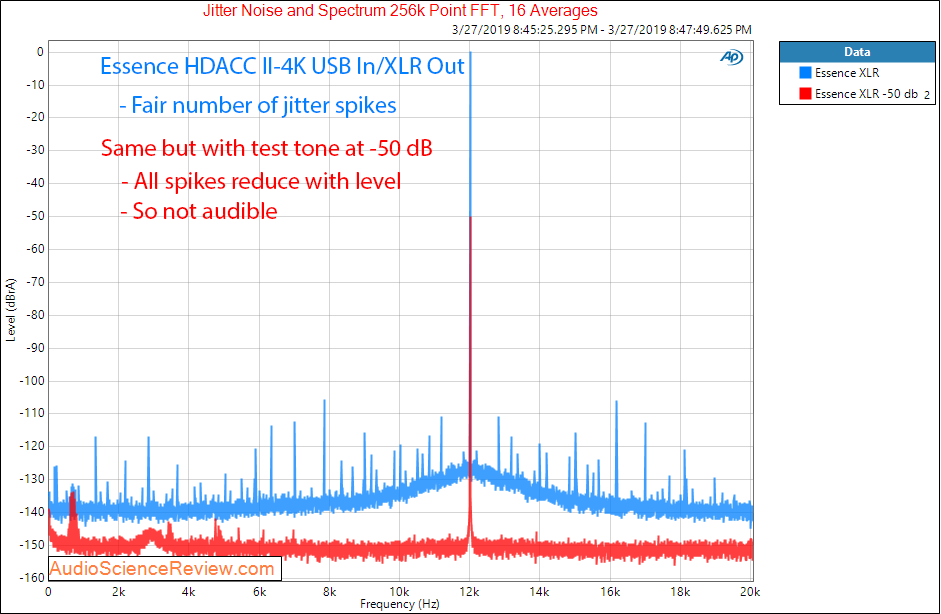 HDMI lights up a lot of circuits and likely is the cause of many of these spurious tones. Fortunately they are dependent on the level of the signal/music being played. Since music doesn't have full amplitude at 12 kHz (your tweeter would fry if it did), I dropped the signal level by 50 dB and as we see, both the noise level and unwanted tones sank into oblivion, below -140 dB. 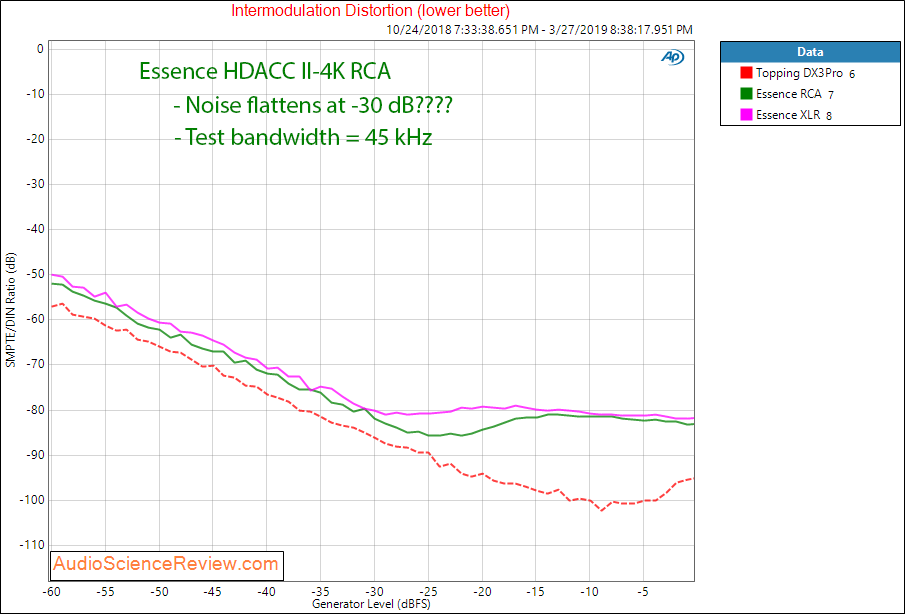 To figure out what is going on, I looked at the spectrum of noise generated with the generator turned off: 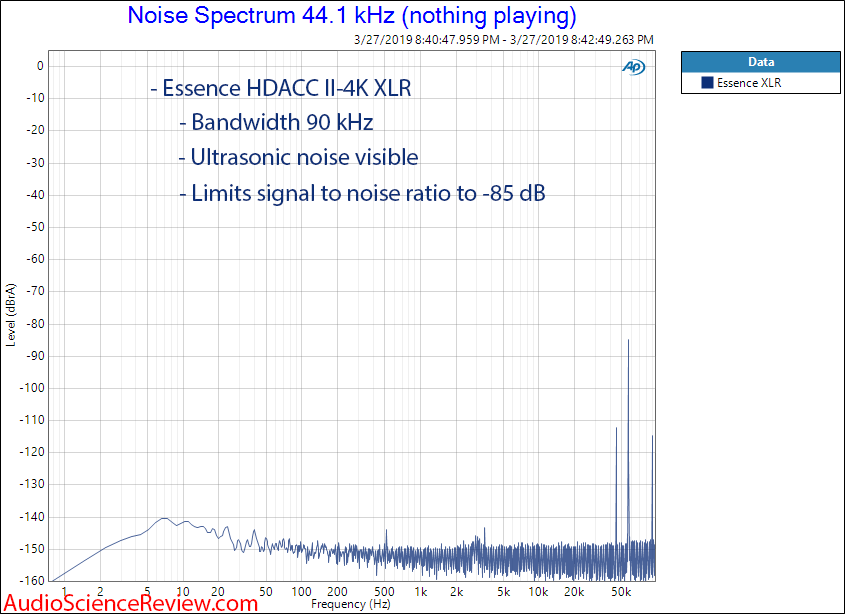 We see some ultrasonic tones. I suspect those are responsible for the noise level in IMD test since they are within the extended bandwidth of test.

Multitone tests also showed more distortion that we should see: 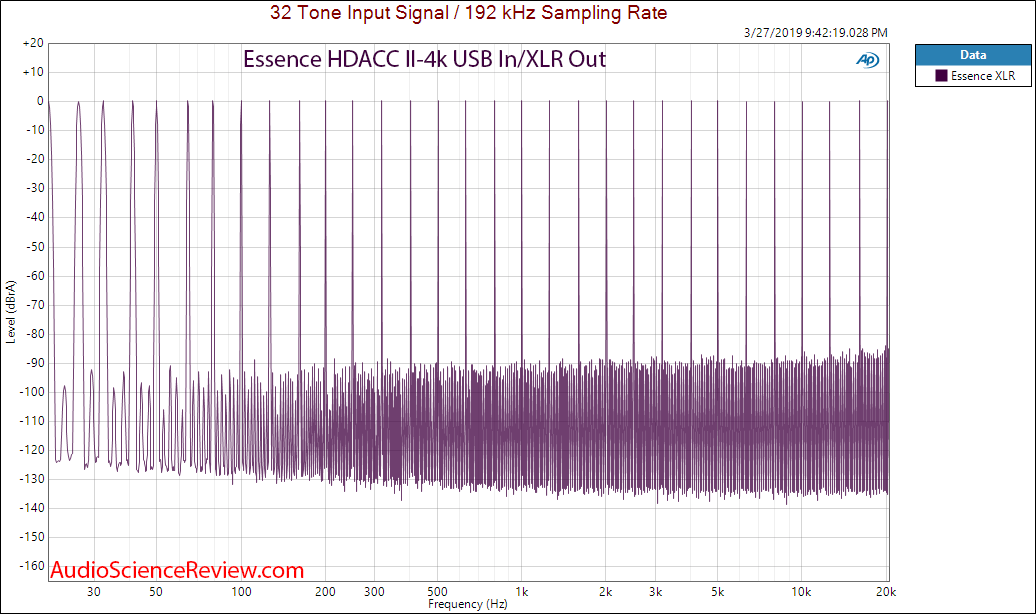 I have now set the max level to 0 dB so that we can easily compute the available, distortion free dynamic range. Here, it looks to be 90 dB or better depending on frequency so we are mostly good for CD quality music.

Headphone Amplifier
I did not expect much from the headphone amplifier but was pleasantly surprised that it had a lot of power. Here it is with 300 ohm load: 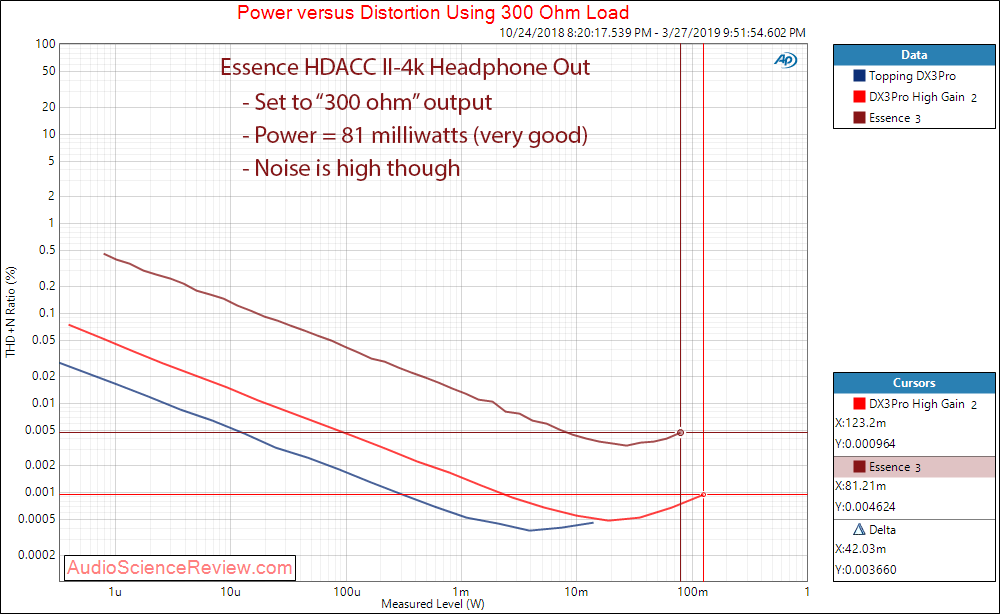 The HDACC II-4K has a headphone impedance setting. All it seems to do is set the max voltage and hence power you can get. For above test, I set it to 300 ohm. Setting it to 600 Ohm (highest available), produced the identical curve except that it severely clipped right where the cursor is.

Here is what we get with 33 ohm load, emphasizing current delivery: 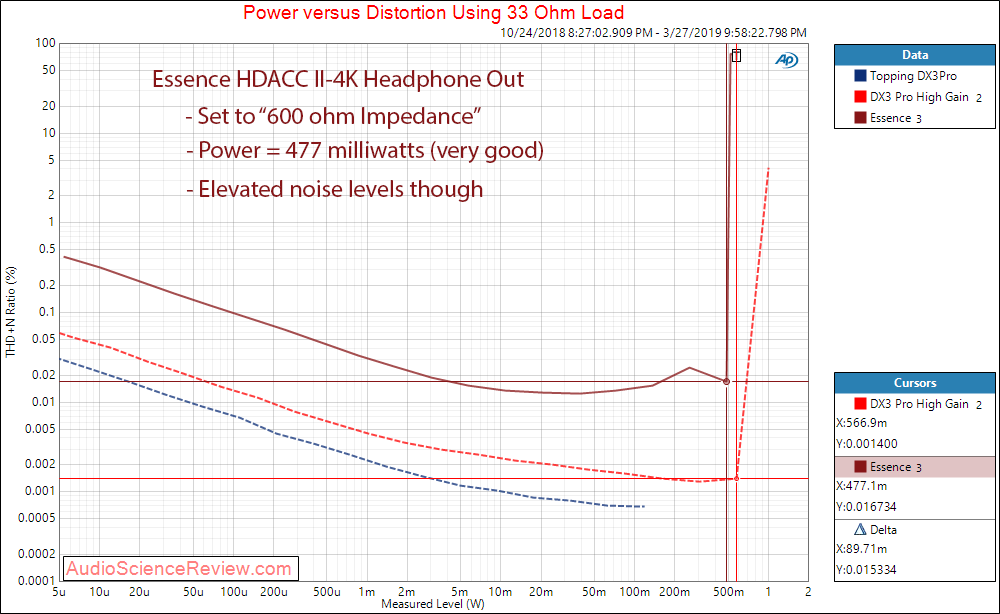 You can see the clipping now with 600 ohm setting.

Headphone Listening Tests
Testing with my Sennheiser HD-650 headphones demonstrate the power capability of the HDACC II-4K with plenty of bass and dynamic range. I could clip the unit at -3 dB and higher but that was pretty loud.

Switching to Hifiman HE-400i again produced good performance but there was less sensation of bass than I like to see. And clipping was easier to achieve.

Overall the performance was very satisfying if you did not push the unit to its limits or your hearing.

Conclusions
If this were a pure DAC with the typical inputs, it would get a lot of scorn from me at its price range. But this is no typical DAC. Search for HDMI DAC and the first hits are from Essence and then some threads on our forum! It simply is hard if not impossible to find desktop class DACs with HDMI input. The alternative of getting an Audio/Video Receiver or Processor is a non-starter given their massive size, amount of power they use and often, difficulty of navigating their menus.

The unique functionality and usability of the Essence HDACC II-4K pushes me to put it on my recommended list. After all, it doesn't matter how good your DAC is if it can't play the source content you have! I do hope the designer takes these measurements to heart and works on perhaps rev 3 that smoothes out the rough edges in my test data.

As you see, one ear on the pink panther is chipped. I need to by an electron microscope so that I can precisely repair it, one molecule at a time. So please donate money using:
Patreon: https://www.patreon.com/audiosciencereview), or
upgrading your membership here though Paypal (https://audiosciencereview.com/foru...eview-and-measurements.2164/page-3#post-59054).
Amir
Founder, Audio Science Review
Founder, Madrona Digital
Contributing Editor, Widescreen Review Magazine
Click for My Technical Background
Master List of Audio Reviews

Thanks very much, @amirm ! I've been looking forward to your tests and review of this unit!
Enjoying my pure, perfect sound--forever! Or at least until I die, maybe?
OP

Super!
Could you also, one day, test it as a HDMI > optical or HDMI > coaxial digital converter?
D

By feeding the HDMI output from a standard Chromecast to this DAC, you now have a direct replacement for the now discontinued Chromecast Audio (feeding a DAC through Toslink); this allows you to use any Chromecast-enabled app, which is exactly what I was looking for ever since Google decided to stop selling Chromecast Audio devices.

That's great news, though this DAC is almost 3 times as expensive as what I paid for my Topping D50. Still, I agree with Amir....this is the only standalone DAC I've seen with an HDMI input.

Thank you @amirm for this very relevant review.
There is no spoon.
N

Aka Lindy Ldac Pro with no HDMI.

I must be confused. A large part (all?) of the appeal of HDMI for audio is getting multi-channel support. If so, then shouldn't this have multi-channel analog out?

Thinking out loud, what about an HDMI > multiple digital out where each digital is one of the front/rear/center/side/etc. channels? Such a thing (use-case?) exist?
OP

daftcombo said:
Super!
Could you also, one day, test it as a HDMI > optical or HDMI > coaxial digital converter?
Click to expand...
Sure. I will give it a try later today.
Amir
Founder, Audio Science Review
Founder, Madrona Digital
Contributing Editor, Widescreen Review Magazine
Click for My Technical Background
Master List of Audio Reviews

Nango said:
Re-Brand from this:

Aka Lindy Ldac Pro with no HDMI.
Click to expand...
Oh, I wonder who designed it, and who is selling it.
Amir
Founder, Audio Science Review
Founder, Madrona Digital
Contributing Editor, Widescreen Review Magazine
Click for My Technical Background
Master List of Audio Reviews
OP

confucius_zero said:
Would splitting the HDMI signal then toslinking into a higher SINAD dac improve sound quality over this essence dac?
Click to expand...
It would and that is what I will be testing later.
Amir
Founder, Audio Science Review
Founder, Madrona Digital
Contributing Editor, Widescreen Review Magazine
Click for My Technical Background
Master List of Audio Reviews
N

amirm said:
Oh, I wonder who designed it, and who is selling it.
Click to expand...
And look at this:

amirm said:
It would and that is what I will be testing later.
Click to expand...
And as a bonus, it would likely be far less expensive.
F

folzag said:
I must be confused. A large part (all?) of the appeal of HDMI for audio is getting multi-channel support. If so, then shouldn't this have multi-channel analog out?

Thinking out loud, what about an HDMI > multiple digital out where each digital is one of the front/rear/center/side/etc. channels? Such a thing (use-case?) exist?
Click to expand...
I share those sentiments.

Nango said:
And look at this:

@amirm Have you tried if LPS makes a difference?
Last edited: Mar 29, 2019
Living in the gap between past and future

Nango said:
And look at this: