This is a review and detailed measurements of Asus STX II PCI Express sound card. It is on kind loan from a member and retails for USD $219 on Amazon including Prime shipping. Full list price is $299.

This is a medium sized PC card which oddly requires external power. You can see it here together with the recently reviewed USB DAC, the Khadas Tone Board: 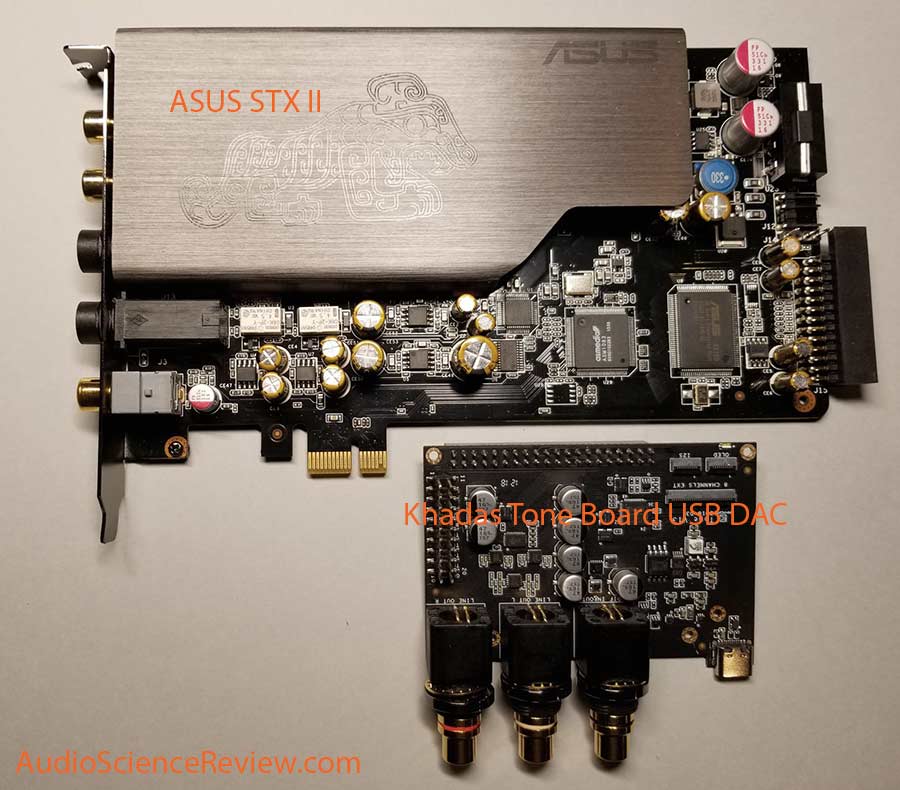 So inch for inch, it better measure a lot better. OK, some of that real estate is dedicated to headphone output and analog input which the Khadas board lacks. Still, with all the space, extra shielding, etc. it better do well. Asus specification shows near state of the art performance specs:

If it lives up to these specs, it would rate at tier just below state-of-the-art desktop DACs. Will it get there? Let's measure it and find out.

Edit: Turns out the ASIO interface with my AP software uses is stuck in 16 bit mode. Changing to 24 bit using external software, does remedy this and allows a few more dBs of performance. See later in the thread or this post: https://www.audiosciencereview.com/...f-asus-stx-ii-pci-sound-card.4915/post-111244

WASAPI interface is not impacted so if you use that, you get 24 bit support.

Measurements
The ASUS STX II allows "rolling" (swapping) of the current to voltage and output buffer op-amps. For this testing, I left the common buffer op-amp as shipped but swapped out one of the I/V op-amps to an LME49720. This way we kill two birds, testing the stock unit and effect of op-amp rolling to some extent. Here is our dashboard view: 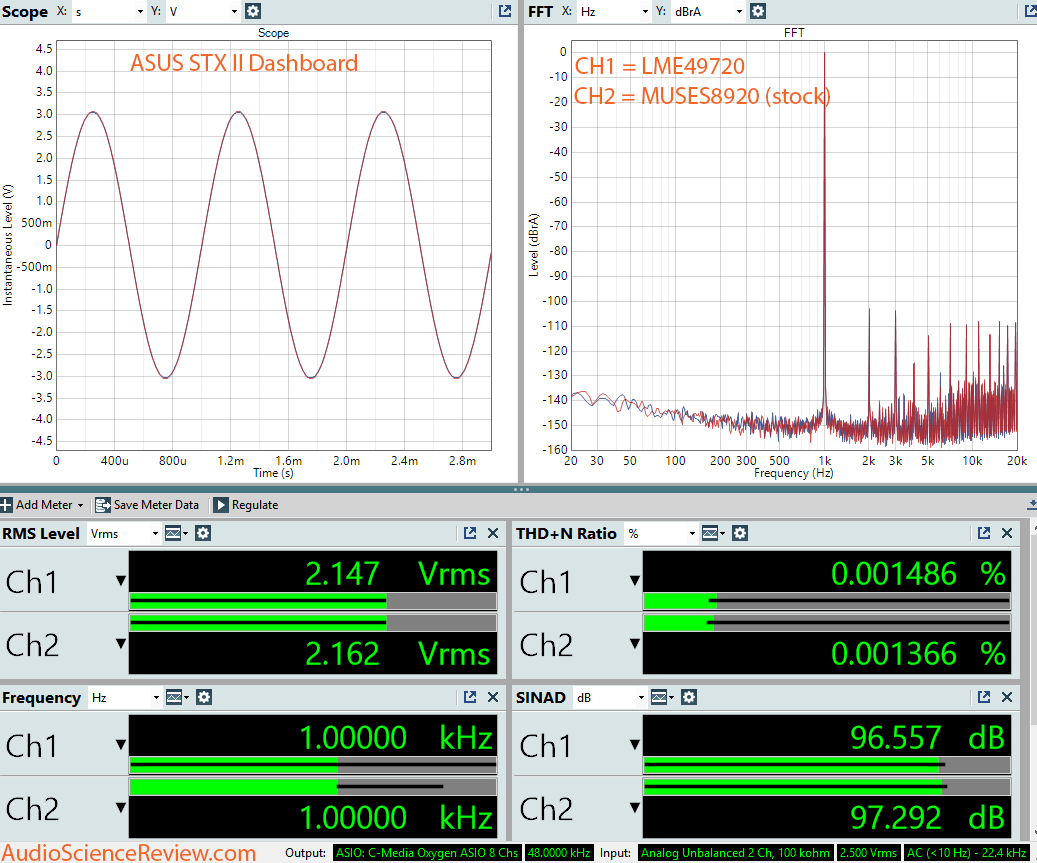 Well, this is disappointing. Distortion specs are much worse than specified with SINAD being missed by whopping 13 dB!

Both output voltage and SINAD are better than my Gigabyte B8 motherboard though: 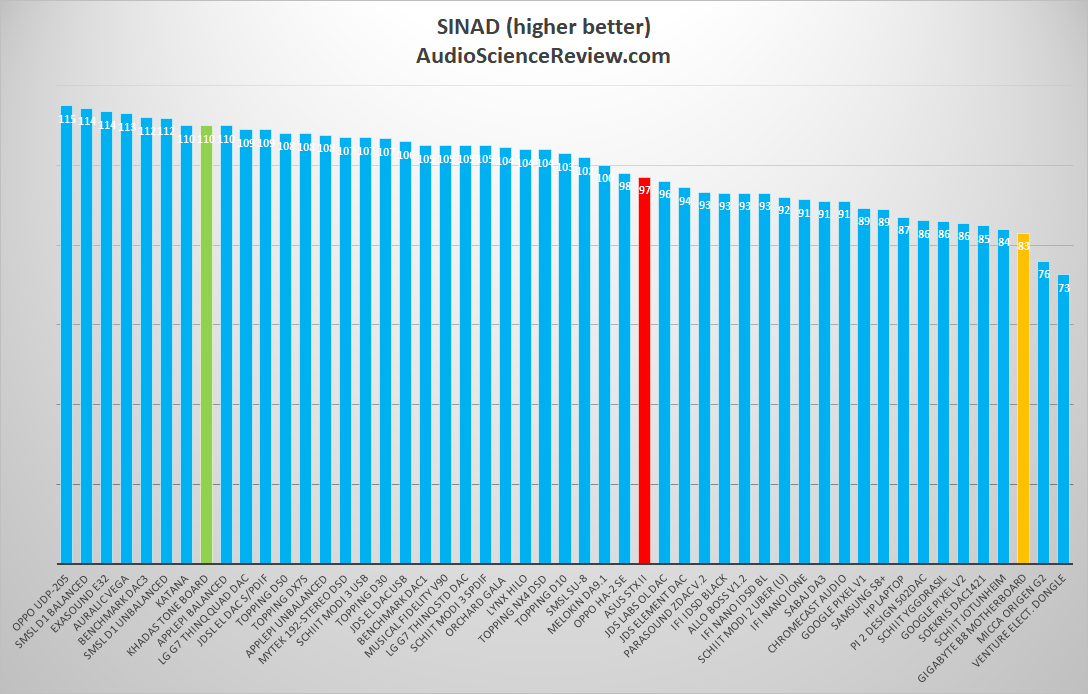 On the other side of the coin, the Khadas Tone Board completely cleans its clock though with 110 dB of SINAD.

Let's test the claim of 124 dB for dynamic range: 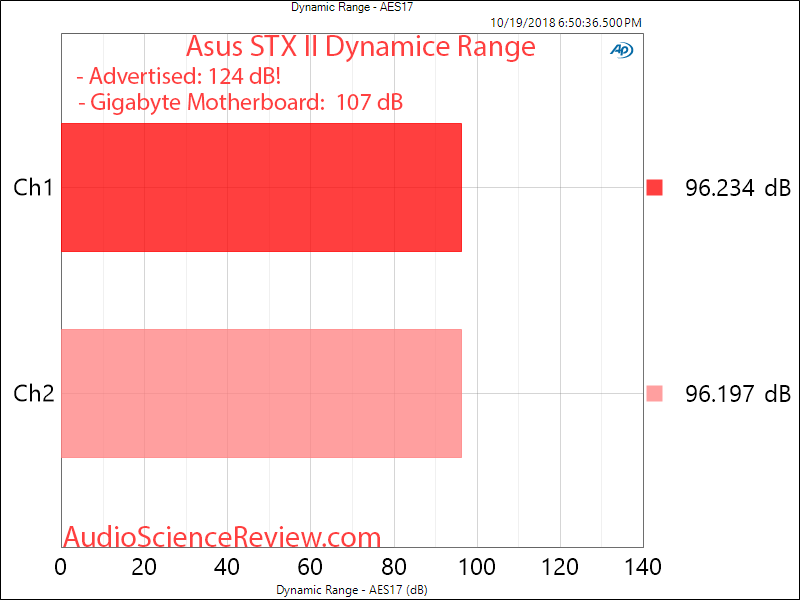 The picture stays just as ugly with Jitter and noise: 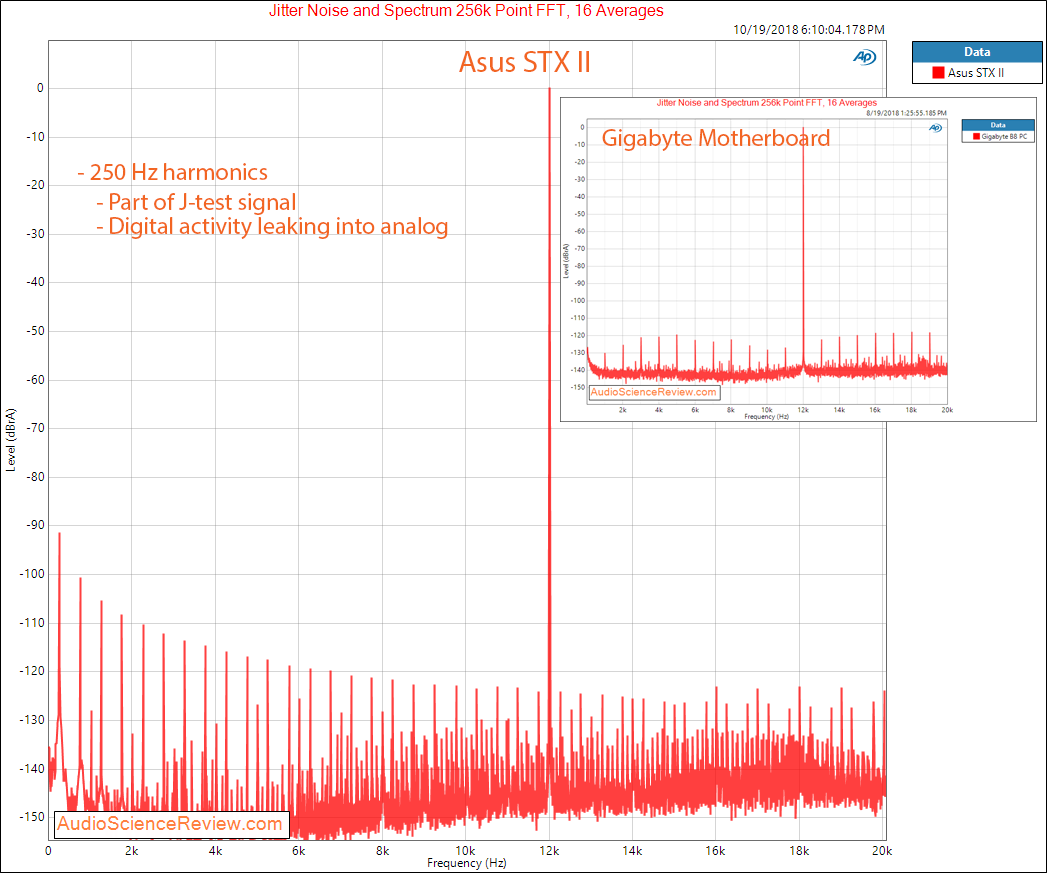 The J-test signal toggles all the sample bits to the tune of 250 Hz. This should be invisible since it is being applied to last bit of 24 bit words. Yet, we easily see its spectrum here indicating bleeding of digital circuits into analog.

Once again, the Gigabyte B8 motherboard did much better (inset). 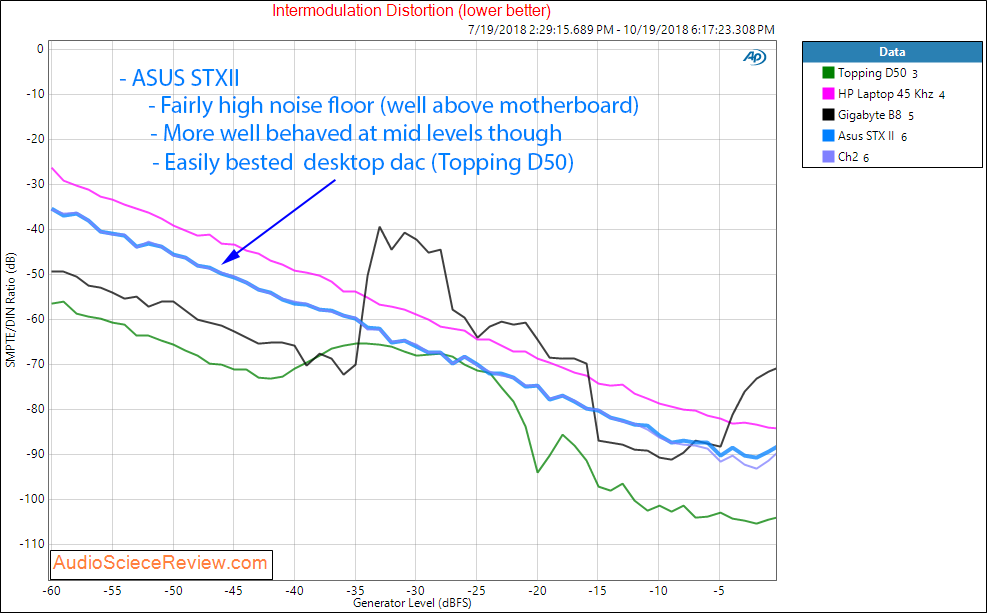 The higher noise level of Asus STX II hurts it here in the initial parts of the graph. Fortunately performance stays well behaved without the "hump" that the Gigabyte B8 demonstrates in mid-levels.

The Topping D50 also has a hump but it easily beats the Asus STX II in the rest of the spectrum.

Last but not least, let's look at linearity: 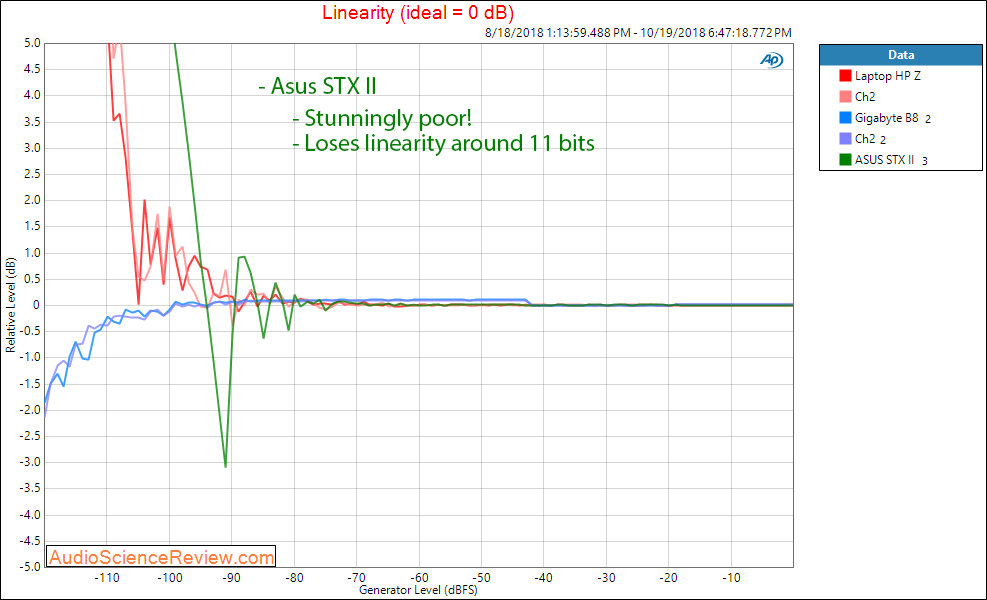 This is remarkably bad. And in both channels so differing op-amps in I/V state makes no difference. The error is off the charts by the time we get to the limit of 16 bit audio (96 dB). You lose accuracy in as low as 11 bits. Once gain, the Gigabyte B8 motherboard performs better and by large margin.

I did not test the headphone output. It has a 10 ohm output impedance which is a bit problematic.

Conclusions
My experience with add-on sound card has uniformly been poor. Despite claims of high measured performance, I would routinely hear my computer activity through them. Alas, I had not tested them for a while so went into this review thinking the situation may be much improved. That was not meant to be. The Asus STX II despite looking otherwise, has a number of serious engineering problems. At best we can say it is susceptible to differences in motherboards. But isn't that what they were supposed to do right for nearly $300? Make a card that would sound good regardless of the machine activity? Measured performance is far, far below specification and in a number of cases, worse than my motherboard.

Ultimately, my strong advice remains to spend your money on external DACs. USB interface is plenty fast, is plug-and play, and doesn't require opening the machine to use them. The ASUS STX II by the way, required custom drivers to work. Heaven forbid Microsoft changes its driver interface again and Asus doesn't provide an update for that future OS.

If you want a bare board solution, take a Khadas Tone Board, stick it inside your PC with a bit of sheet metal work and be golden for $99.

interesting to see them continue to downgrade the DAC in their cards. I owned the original and it had 1792A.

Thanks for testing it. I guess they couldn't solve the problems inherently present inside a computer case.
“…we falsely believe that the mind of everyone we interact with is like our own in its elements and rules, but not in its detailed contents” (Daly & Wilson 1997.)
K

Can't say I'm surprised, audio has never been a main focus of Asus as far as I know. That's no excuse though.

I wonder how Creative Labs Sound Blaster products are today.

they have put out some pretty high end audio gear though in the asus essence one, essence stu and essence iii. you would think there would be a trickle down effect there. inside the pc may just be too much to overcome.

Sythrix said:
I guess they couldn't solve the problems inherently present inside a computer case.
Click to expand...

I don't think it has to do only with pc enviroment. I bet measuring a RME or Lynx card will be totally different.
When you see a card with external power supply, which is still from the pc psu, and swappable op amps, it means bullshit marketing.

derp1n said:
If it's doing worse than Gigabyte's on-motherboard audio, the problems aren't "inherently present inside a computer case", this thing is just poorly engineered or the sample supplied to Amir is broken.
Click to expand...

It's worse than the motherboard in some aspects, but not everything.

So yeah, I don't think they've overcome those limitations, which may very well have contributed to the bad measurements. Unless we get multiple tests across multiple systems, it's not like we'll be able to do anything but assume.
Last edited: Oct 20, 2018
“…we falsely believe that the mind of everyone we interact with is like our own in its elements and rules, but not in its detailed contents” (Daly & Wilson 1997.)
S

Atkinson had similar results from the first version of the card, but a bit better.

"With 16-bit data, the linearity-error test was dominated by the recorded dither noise, so I haven't shown the result. I couldn't replicate the manufacturer's claim of an A-weighted signal/noise ratio of 124dB for the Xonar Essence. However, ref. 1V output, I measured 114dB for the STX, which is still superb, but 102dB for the ST. It's possible that the actual ratio will depend on the computer in which the card is installed.
Read more at https://www.stereophile.com/content/asus-xonar-essence-ststx-soundcards-measurements"
I wonder how he chooses what to show or not..
Last edited: Oct 20, 2018

Yes this is not good news. My last desktop using Gigabyte MB had decent on board sound with measurements 3 or 4 db less good than these without the nasty jitter profile. It did have terrible noise at 192 khz rates, but was good at 88 and 96 or less. My current desktop which is a home server has better on board sound. With similar numbers (roughly clean to 16 bits) and is clean at 192 khz. Neither let thru any audible or highly measurable computer activity into the output.

Clearly for someone on a budget a Behringer or Focusrite recording interface or some of the tested quality low cost external DACs are a much better place to spend money. Seems computer video, including built into the MB video is much better than on board or plug in card audio.

Come to think of it, the old Maudio Audiophile 96 sound cards would do about this good. First sound cards that had no computer bleedthru in my experience, though they weren't super quiet and did have very high jitter.

Maybe Asus can rebrand it a Schiit sound card, and pump up the price by $100.
B

@amirm could you show the FFT of 1kHz sine at -90dB and -110dB? Thanks.
Check the true bit-depth of your files and audio engine 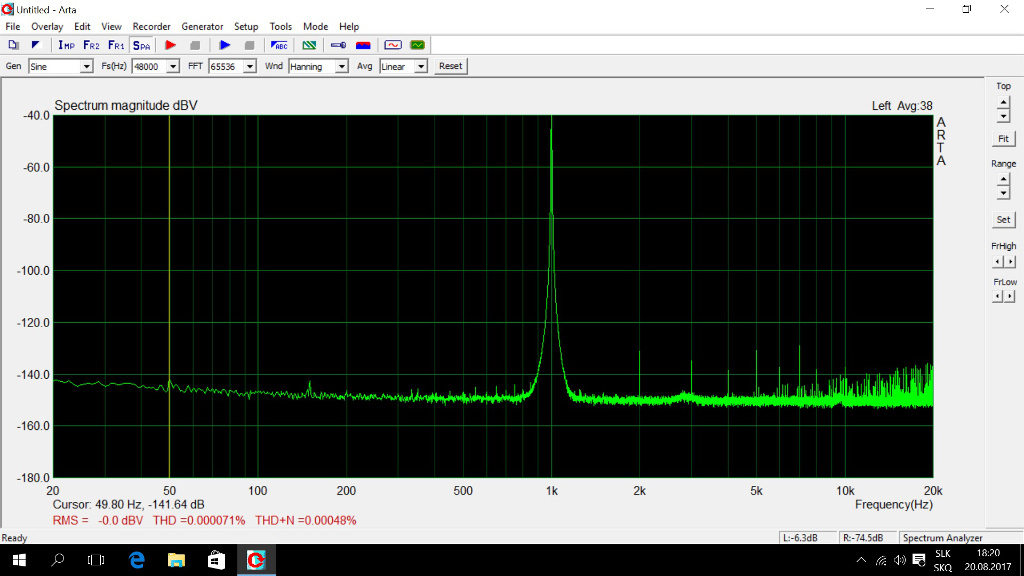 I had the original Asus Xonar Essence STX, and I thought it sounded fine although, yes, the drivers sucked. I wonder if the sample measured is broken or defective.

soundArgument said:
I had the original Asus Xonar Essence STX, and I thought it sounded fine although, yes, the drivers sucked. I wonder if the sample measured is broken or defective.
Click to expand...

I had the first as well and I remember it included printed measurements of your card (supposedly) in the box on a nice card. Perhaps QC has gone out the window. I was expecting the same level of care and attention to detail with the second one, but it was absent.
“…we falsely believe that the mind of everyone we interact with is like our own in its elements and rules, but not in its detailed contents” (Daly & Wilson 1997.)

you do have to wonder how much each individual psu is going to affect things. pc psu quality can vary dramatically

It won't fit in my NUC, boo hoo... Another piece of gear busted by ASR.
I've got soul, but I'm not a soldier...
You must log in or register to reply here.

S
Digital out of Asus Xonar STX (not II) ok or not so much?