First off, a bit of background: Knowles Corp, KN1’s designer, does not have any consumer products / brand in the TWS world as far as I know. It is a well known supplier of electroacoustic parts such as balanced armatures, MEMS microphones (such as those integrated into the Mars rover https://www.knowles.com/about-knowles/blog/first-sounds-from-mars-delivered-by-knowles), but also sound processor semiconductors and passive components such as capacitors, filters, inductors and more. Being this diversified their products can be found in many applications and products. According to google finance, Knowles Corp has /had a turnover hovering around 800+ mio USD and employs about 7’000 staff.

The KN1 is an odd item for several reasons:


So far for the background. Let’s focus onto the device: it’s a blob shaped object (as opposed to the stick and ball models out there) and, like many other TWS in ears, quite extensive dimensions, so as to accommodate battery, sensors and drivers and various discrete and semiconductor components. 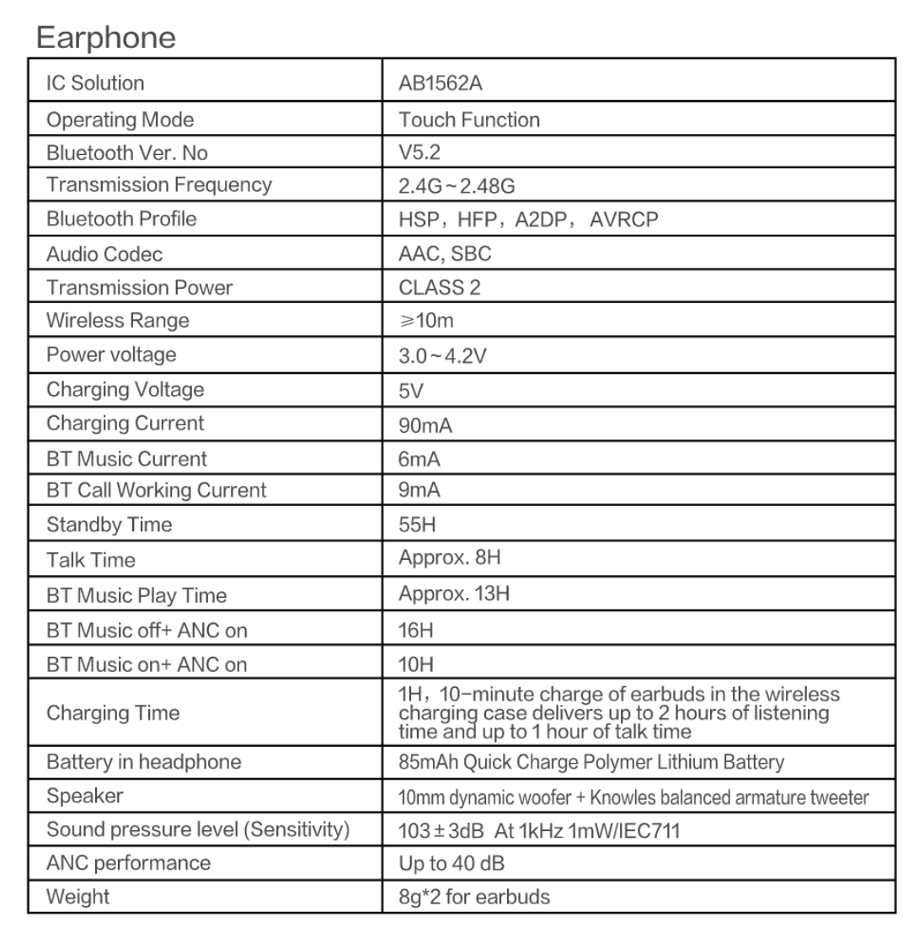 Highlights are the hybrid speaker reference design and the Bluetooth 5.2 (the SOC is reportedly capable of 5.3...) version, enabled by the Taiwanese Airoha SOC AB1562A which manages everything from BT LE sound to charging (https://www.airoha.com/products/p/VIqdFSQFjSivD2iX). Unfortunately I have no transmission Bluetooth 5.x device at hand, and no setup to test any differences between the transmission protocols, so I couldn’t test this feature.

The driver / acoustic design is one of Knowles core competencies with years of experience in balanced armature development and manufacturing. Documentation hints that the RAN (no spec sheet anywhere, could be a spoutless version of the RAU driver https://www.knowles.com/docs/defaul...4832-b148.pdf?Status=Master&sfvrsn=bd3c73b1_4) supertweeter recently launched is included in the KN1. News feeds announced a collaboration with Danish designer / manufacturer Ole Wolff (https://audioxpress.com/news/knowle...ounce-compact-hybrid-driver-for-tws-earphones) late last year so it could well be that the 10 mm dynamic driver is one of their products. OW is also a renowned developer and manufacturer of speaker drivers.

I'd hate to crack them open to check for now, so lets take a look at some pictures how they are built: 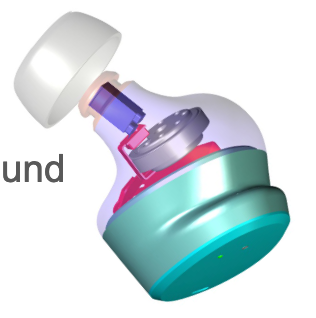 A CAD assembly figure reveals the spatial driver configuration, with the dynamic driver in the rear and the tweeter mounted in the canal close the sound nozzle, so as to minimize resonances. A vent is visible on the housing, as a metal acoustic mesh on the outlet. The latter hints at careful parts selection as metal meshes can have pore distribution variability compared to plastic meshes.
Three MEMS microphones are built into each earpiece, with one in built into the sound duct as shown in the picture in pink, probably for active sound equalization to get the desired FR. Here is another drawing, not adding much more info. 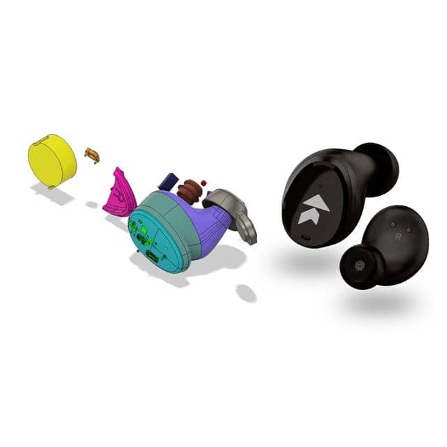 Connecting the earphones to a macbook and a PC laptop products was no issue. The MIDI utility app on the macbook shows one input (microphone) and interestingly two output channels. The stereo channel has decent resolution, I don’t know what the mono channel could be there for (noise cancelling? System messages? Your guess…)

Lets move on to some audio measurements. Knowles says they have developed their own target preferred response curve (https://www.knowles.com/preferred-listening-response), to which the KN1 is supposedly tuned to, featuring a high frequency extension like the black curve in the picture below as opposed to the drop off in the Harman 20xx curve: 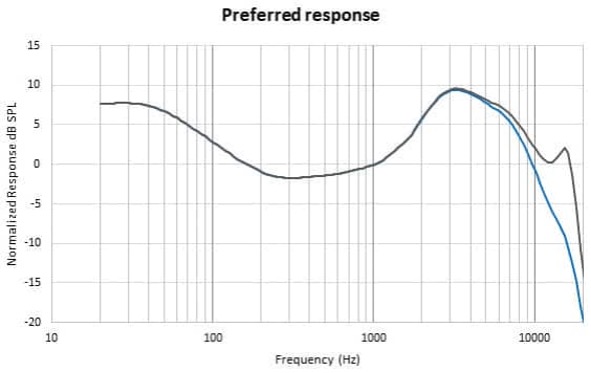 Along this line, the KN1 documentation https://media.digikey.com/pdf/Data Sheets/Knowles Acoustics PDFs/KN1_DS.pdf shows a coupld of FR graphs on GRAS gear w/o ANC against Harman preferred response: 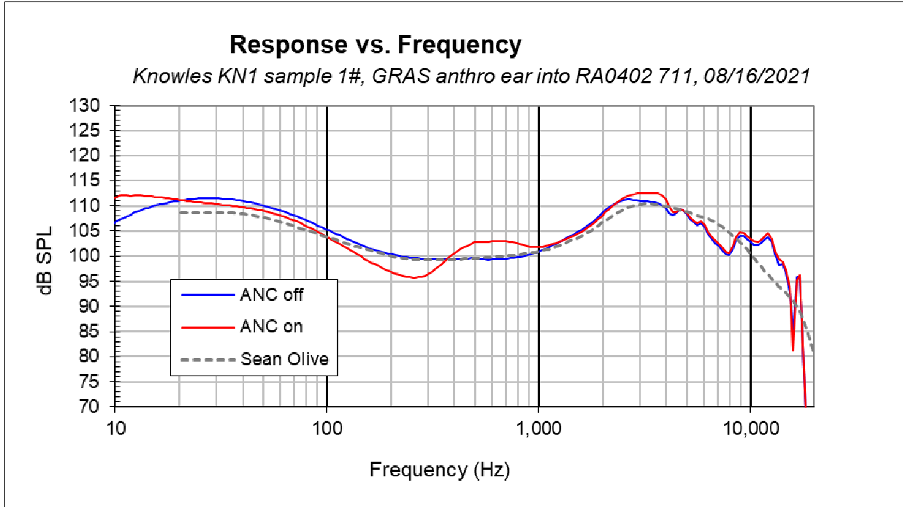 To see if it does what this says, I did a couple of measurements on my own using the miniDSP EARS system at default gain. Yes, its not a perfect setup, but not everyone can afford professional gear for 10s of kUSD, feel free to criticize as you wish and/ or doubt its meaningfullness. I will anyway show some data. Data source and transmission from a Macbook Pro running Fuzzmeasure 4.2.2 software results of a single measurement without any addtional background noise in a quiet room:

And THD %, same as colour legend as above.

Immediately visible is quite a significant FR difference between the two modes (ANC on / off). THD looks pretty good, almost entire spectrum incl 10 – 100 Hz below 1% THD, again take both results with a pinch of salt, so more indicative than a precise result. I haven’t had the time to increase sound pressure to see when distortion kicks in.

Next I tried to compare the FR with the provided documentation in picture overlay to compare: 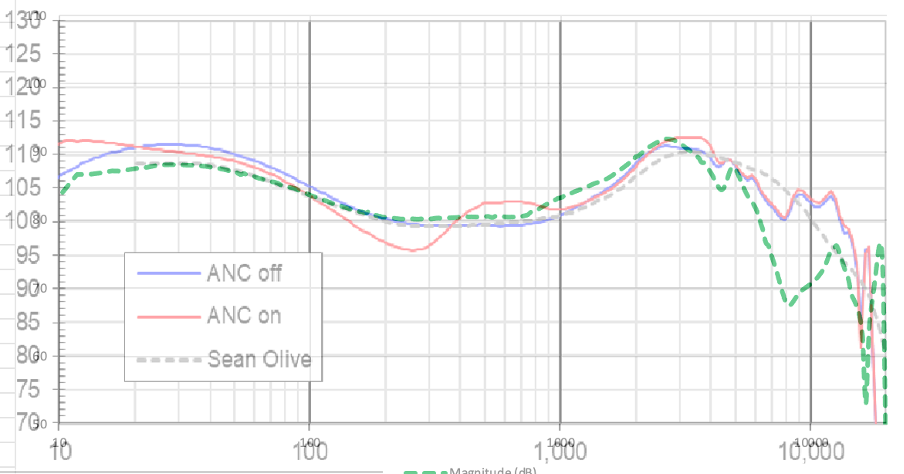 Its not the greatest overlay, sorry, I tried to match the extents of the axes as well as possible. The green dashed line is my recoding of the ANC off FR as above and here I compare to the blue / red overlay. The grey dashed line is, looks like a Harman preferred response curve (hence the reference to Sean Olive). There is a pretty good fit between 10 – 800 Hz. Thereafter a slightly early increase and a significant through between 6 – 12 kHz. At present I have no explanation for that mismatch, feel free to speculate if its real or a result of my inferior test setup. Anecdotally though with other IEMs including my own hybrid prototypes and builds at https://executive.audio I do get response in that high frequency range with the same test setup, so its not because the microphones are unable to cover that part of the spectrum.

Another overlay with ANC on (compare solid green with thin red) in the picture below: 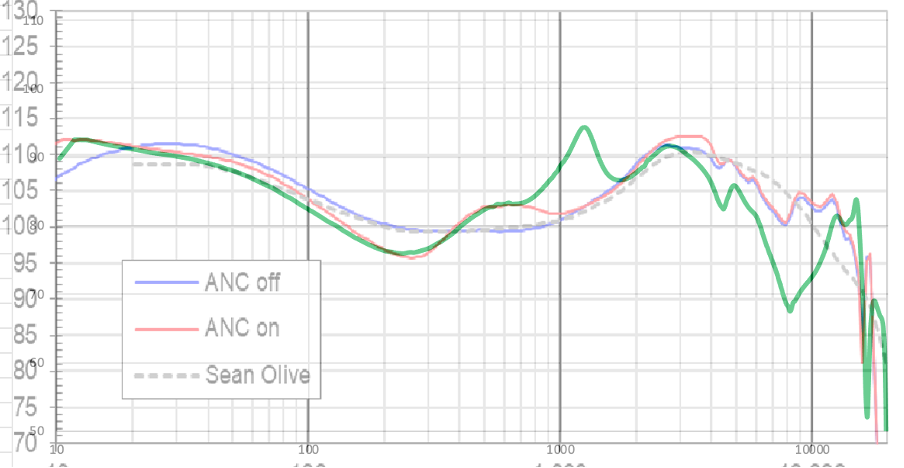 Again nice fit from 20 – 800 Hz. Then there is an odd peak between 1-2 kHz. Two reasons why this could caused by the device:
So there is good hints that this peak might be an unwanted one caused through unkown reasons and maybe not properly suppressed by the ANC DSP.

For the rest of the spectrum there is again a reasonable fit to what Knowles measure with the exception to the trough between 6 – ca 12 kHz we have seen before in ANC off.


Subjective listening tests
I am really not a fan of such reports as they rarely add value. You hear what you want to hear. In any case, I tried listening to music in all of the different modes (ANC on / off, wind noise reduction and transparency mode). Clearly the best output is on ANC off. I am not pouring out the usual audiophile jargon here, I simply say that it sounds really good but a bit thin.

Further info on usage.
Also I can report a whole set of glitches, from spontaneous mode switches and annoying interruptions. When you look down so that the head is almost horizontal, any sound is switched off. Video conferencing is horrible, with echos and other annoying glitches.

Also the ANC is not really perfect. I seems to me that only part of the spectrum is cancelled. If I have some time in the coming weeks, I may try to attempt to prove this through measurements, however, I am not sure what the best setup would be to test that.

Conclusion
In total the overall “consumer” experience is quite average. Again as stated throughout the review Knowles provides a demonstration platform, not a polished consumer product. In this I think they have succeeded. If you would take the KN1, some money and a developer team, I think you’d have a nice head start compared to starting from scratch. And out of the box, the unaltered sound is really good.


So has Knowles with the KN1 a good tool to promote its wares through budding TWS developers? Certainly not a bad start. Wondering how the KN2 is performing…
You must log in or register to reply here.

Can you EQ this with a compression driver?
2