HQPlayer does not work (resolved, now some results)

amirm said:
I went ahead and ordered it.
Click to expand...
Has it arrived yet? Any time spent using it with HQPlayer?
OP

mirekti said:
Has it arrived yet? Any time spent using it with HQPlayer?
Click to expand...
It has indeed. Still in box though . First I will do a quick review/measurement of it and then get onto HQPlayer.
Amir
Founder, Audio Science Review
Founder, Madrona Digital
Contributing Editor, Widescreen Review Magazine
Click for My Technical Background
My YouTube Channel
OP

Just a quick update that I put in a couple of hours into this project. More time is needed to gather solid data. For now, the new iFi DAC performs identically to mine! And HQPlayer does something really screwy when I used DSD 512. Since my old DAC did DSD 256 anyway, buying this DAC may have been a waste. Will have to do some investigation to see why it is doing this.

I guess the main advantage (if there's any) is upsampling to DAC's max sample rate to avoid DAC's upsampling i.e. using a PC for filtering instead of DAC.
Regarding DSD512 issues, it is very CPU demanding, maybe this caused...

This is what I've found: http://www.signalyst.com/upsampling.html
OP

CPU is not a problem. I am less than 50% on DSD 256 upsampling. It just produces hugely wrong output so I am thinking it is something else.

The bottom two curves (blue and yellow) are upsampling to lower rates which look fine. The wide curves above it are to DSD 512: 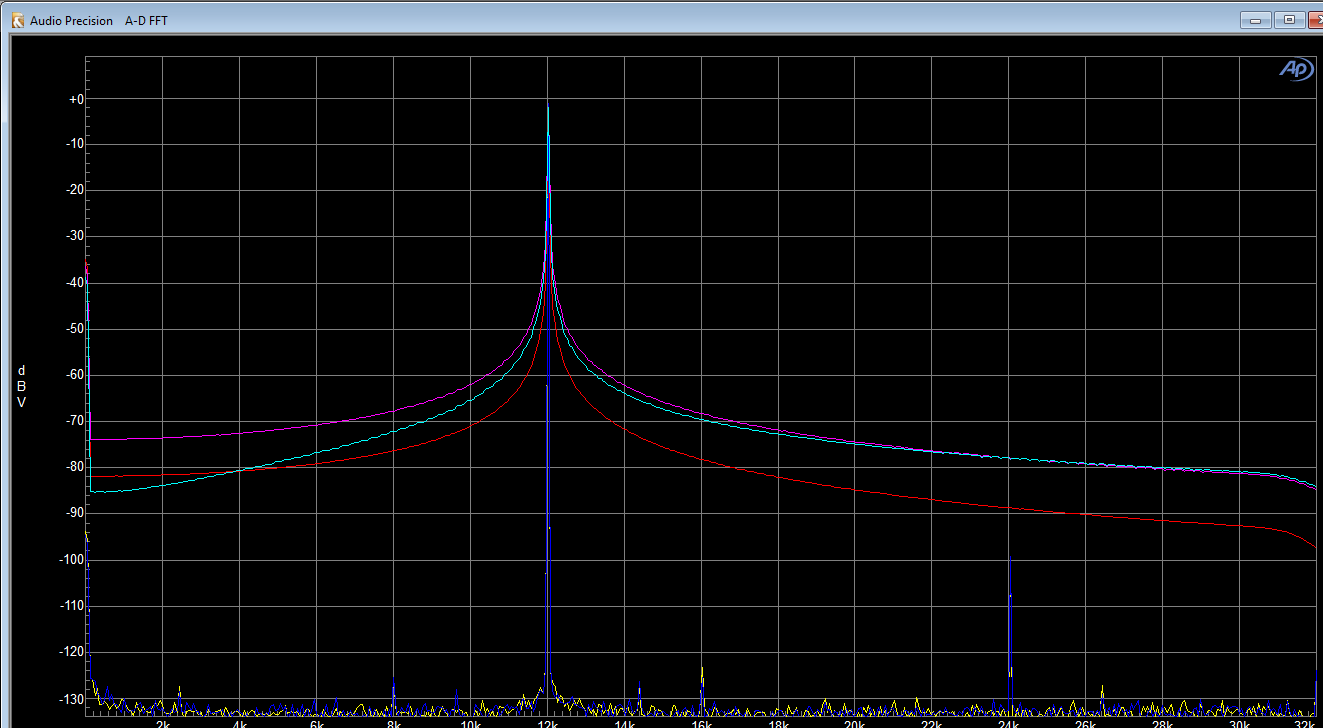 Again, these are not "official" results until I have time to investigate more.

BTW, this program continues to be very screwy when it comes to the interface. It keeps taking away the options to set resampling rates from me. Have to keep going into setup menu to force them to show.
Amir
Founder, Audio Science Review
Founder, Madrona Digital
Contributing Editor, Widescreen Review Magazine
Click for My Technical Background
My YouTube Channel

I have always read that there are some issues with your DAC's driver, so you might want to look into that.
Also, keep in mind that DSD512 upsampling doubles cpu calculation compared to DSD256.
B

Blumlein 88 said:
OOOPS!!!! Experimental mishap. Leaving this here for now, but may delete it.

I started out with a Dell laptop feeding the firewire lead to the TC Impact Twin. I was using a Lenovo with the Forte. After the first test I swapped places with the computers. I was checking other software for playback and upsampling. I swapped as that software was already on the Lenovo. There are some differences, but very, very minor. I ran the initial 48 khz natively in Foobar and it was also clean with low noise the second time on the Lenovo. Somehow the Dell firewire port is causing high jitter and a higher noise floor in the TC Impact Twin. With the Lenovo it is clean. Let people not complain about asynch USB.


Okay had some time to kill so did a few measures with Foobar and HQplayer.

The ADC was the Focusrite Forte set to 192 khz/24bit. The DAC was the TC Impact Twin first playing a 48 khz test file with Foobar via ASIO. Next I played the same 48 khz test file via HQ Player using the TC set to 192/24 as HQ Player upsamples to that rate. I used the poly-sinc filter. In all of these FFTs the blue curve is the Foobar playback and green is HQ Player.

First up silence to see the noise floor. You'll see the HQ player is about 12 db lower in noise below 20 khz. The 31 khz spike is an idle tone in the Forte ADC, and the noise rise above 50 khz is the Forte.
View attachment 7681

Now a 1 khz tone. The noise floor is nastier around the Foobar tone while the HQ Player noise floor is not much effected. With HQP the harmonics rise cleanly out of an even noise floor. There also are some low level spikes at 43&45 khz and double that which are absent in HQP.
View attachment 7682

Now for some twin tone IMD signals at 18&19 khz. The Foobar playback has much more grass around the tones and more ultrasonic mirror tones as well. View attachment 7683

Now a look at the Jtest signal at 12 khz. Would appear the HQ Player results in lower jitter around the Jtest signal. Presumably that is also why the general noise floor is lower. View attachment 7684

Now some - 4db white noise from each device. The filter in the Foobar version rolls off starting at 20 khz and is pretty steeply filtered. The HQP version is much cleaner ultrasonically though not rolling off until near 22 khz.
View attachment 7685

So if one is comparing bit perfect playback at the native 48 khz rate and the upsampled playback via HQP it is clear HQP gives better results. Whether any of these artefacts are audible is another issue. HQP is measurably superior.
Click to expand...
Curious about the recent debate about HQPlayer upsampling I found your post. I was glad you did not delete it.

The thing you showed is probably not jitter, it is CAudioLimiter APO in action:
https://blogs.msdn.microsoft.com/ma...audiometerinformation-and-full-scale-signals/

The first video from 4:00 showed a similar pattern as yours without going through the analog chain. I also showed how to eliminate the issue without switching to exclusive mode. It would be useful for people who have a simple playback device without hardware multiclient support and don't like the limitation imposed on exclusive mode.

Maybe there were some compatibility issues with TC Impact Twin ASIO driver and foobar during your test and forced it to run in shared mode 16-bit with CAudioLimiter engaged.

The only Firewire audio interface I ever used was a Presonus FireBox in my workplace. Don't know if jitter is really an issue but I think it should be device and vendor dependent. Did you test the TCIT with a Mac?
S

And getting support from the developer is impossible
M