Blumlein 88 said:
What speakers do you have, and what is their level of THD at say 95 db?
Click to expand...
I have several pairs including JBL 305p mkII. Also, headphones like AKG K701.

I did extensive tests on this site last year. I don't want to do it because it's tiring. What I learnt was, I can definitely hear better than what's on the test. Problem is our ears also distort so I always hear the same distortion on both samples. I suggest listening at low volume then gradually increase as it getting more difficult. If played too loud from the beginning, the test causes hearing fatigue and mixed audio memory. You want to take a rest after -30db. It's fairly easy to get -36db or below. It's basically conflict and trade off between audibility of the distortion and the distortion of our ears. The test music is horrible btw.... 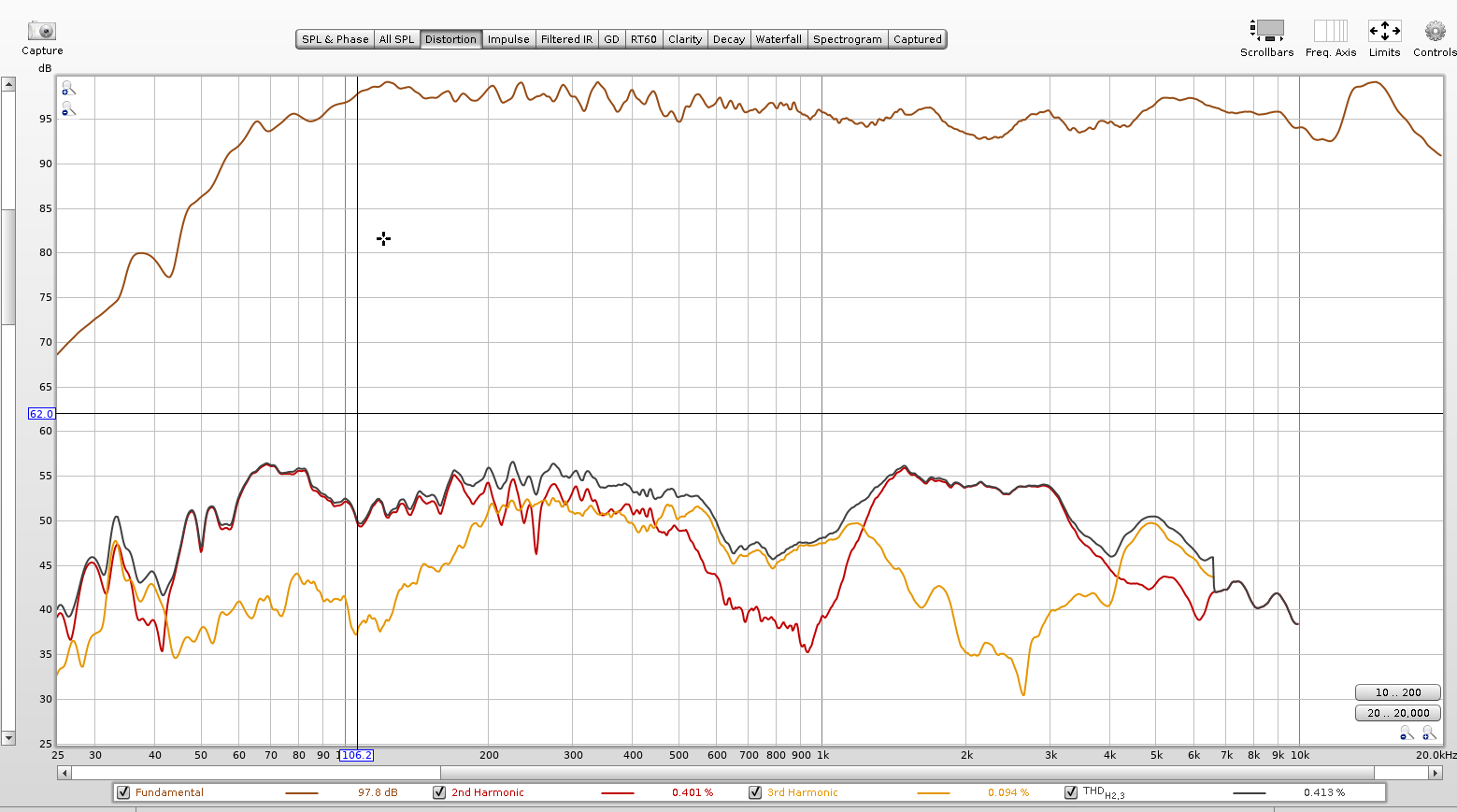 View attachment 35532
Click to expand...
I don't listen that loud but you're right.

Interesting test. I used the default settings of -- and Tracy Chapman and found the quality of the recording so bad I wasn't sure what was distortion and what was just bad audio when getting into the -'s. It's tiring and repetitive with distortion in both samples, so I have no idea which one is the one to pick past well, that one is horrible. Not sure I feel like I gained anything from it. Pretty sure I should upgrade my distortion laden soundcard and try again.

I also tried the Full Speaker. The lowest I got was -39 and the test result was -27. By the end I wasn't even listening to the full clip and there were pop distortions in both samples. Just don't have the patience to listen to it anymore. Gotta wake up in 5 hours for work.
Last edited: Oct 28, 2019
D

Well, if these tests are accurate, it's great for my wallet (bottom of the rankings here I come) because I can't seem to tell distortion past -15dB on "full range speaker" playing "Music J. Stone". The "--" playing "Music T.Chapman - Bl(x) only " I only got to Real Speaker. Maybe I don't know what to look for though especially on such a short clip. Why such a big discrepancy between the tests? It was really easy to tell at -12dB in the full range speaker, but I had a really difficult time with the '--' option. I guess I'm lucky and can't tell distortion

I heard down to -33 dB according this test and, assuming that this value is what I think it is, distortion levels below -40 dB/1 % should be reasonably safe for most music genres. Pure test tones are easier to hear distortion from, so perhaps some music signals (e.g. electronic music) may need even lower figures.

Distorsion of my speaker, SPL unknown in this case (have not calibrated the microphone). 3rd harmonic distortion goes above -50 dB around 1-2 kHz.

Years ago I created a series of files with different amounts of distortion just for fun. With single tones I could "easily" hear 1%, much harder to pick out 0.1% to the point of guessing much of the time. With a two-tone test 0.1% IMD was reliably distinguished. When I switched to music, 1% HD was hard and 5% was actually acceptable much of the time (depending upon frequencies and such). IMD was still easier to pick out but I had to listen more closely, usually to certain passages, to hear it. But I am far from being a trained listener at this time; too many years since I did a bunch of serious listening and went through all the DBTs and such. Just average now, hmph.
Don
"After silence, that which best expresses the inexpressible, is music" - Aldous Huxley

With hi-fi advertisements boasting equipment distortion levels of 0.05% and less, many people would be surprised to learn that their threshold for perception of distortion in a complex waveform is 2% to 3%. This was demonstrated at AR [Acoustic Research] with a standard psychoacoustic testing technique. The subject, listening to a signal, controls the level of distortion with a switch, causing it to rise or fall gradually at will. He is told to decrease the distortion until it is no longer audible to him and then to increase it until it can again be heard...

One of the audience, eager to demonstrate his aural acuity, scored right along with the majority, detecting 0.2% sine-wave distortion but falling back to a 2.5% distortion threshold on a sawtooth waveform, where the rich spectrum of harmonics tends to mask harmonic distortions.

Results similar to an earlier test Stereo Review did with one of Bob Carver's modified amps (or maybe it was a preamp) that Bob modded to inject known quantities of distortion into the signal.
T

The problem is that music signals can vary so much, so being on the safe side is just a good thing.

Thomas_A said:
The problem is that music signals can vary so much, so being on the safe side is just a good thing.
Click to expand...
Absolutely. I in no way endorse amps having distortion more than is design-practical at a given price point. 0.1% seems to be about the most anyone ought to accept in a solid state electrical circuit. Besides, one's loudspeakers (and other analog sources if you use them) will provide enough distortion to satisfy.
A

My result. Active speakers with miniDSP 2x8 and UcD400 in a three way system. Pretty happy with the result considering. My tell was the click around when she sings "babe" in the beginning.
I could not hear any anomaly at the end. Have they fixed the test?
I don't beleive the -54 result. Pretty easy to analyse this if one should bother. (And I am sure someone will ) 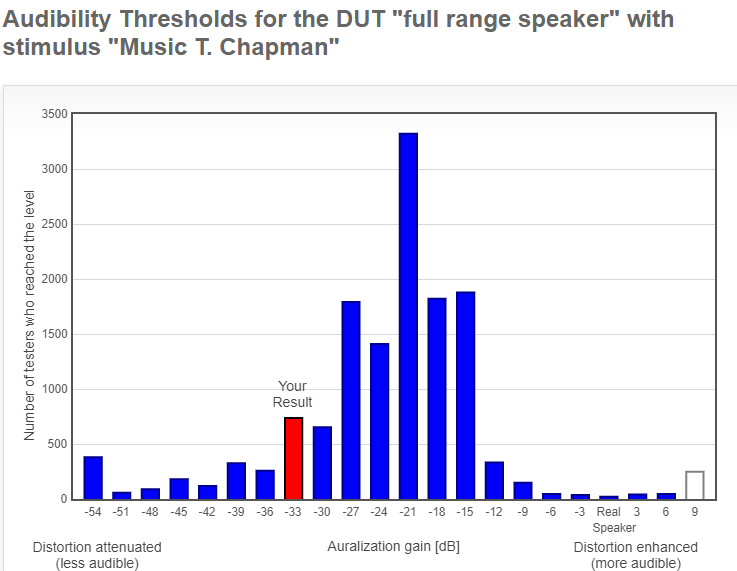 I managed to get a perfect score using STAX SR-001 Mk2 IEMs and an RME ADI-2 DAC as a source.
I found that some of the "lower" distortion tests were easier to decipher than some "higher" distortion tests. Very strange.
I think this is a great ear trainer nonetheless! 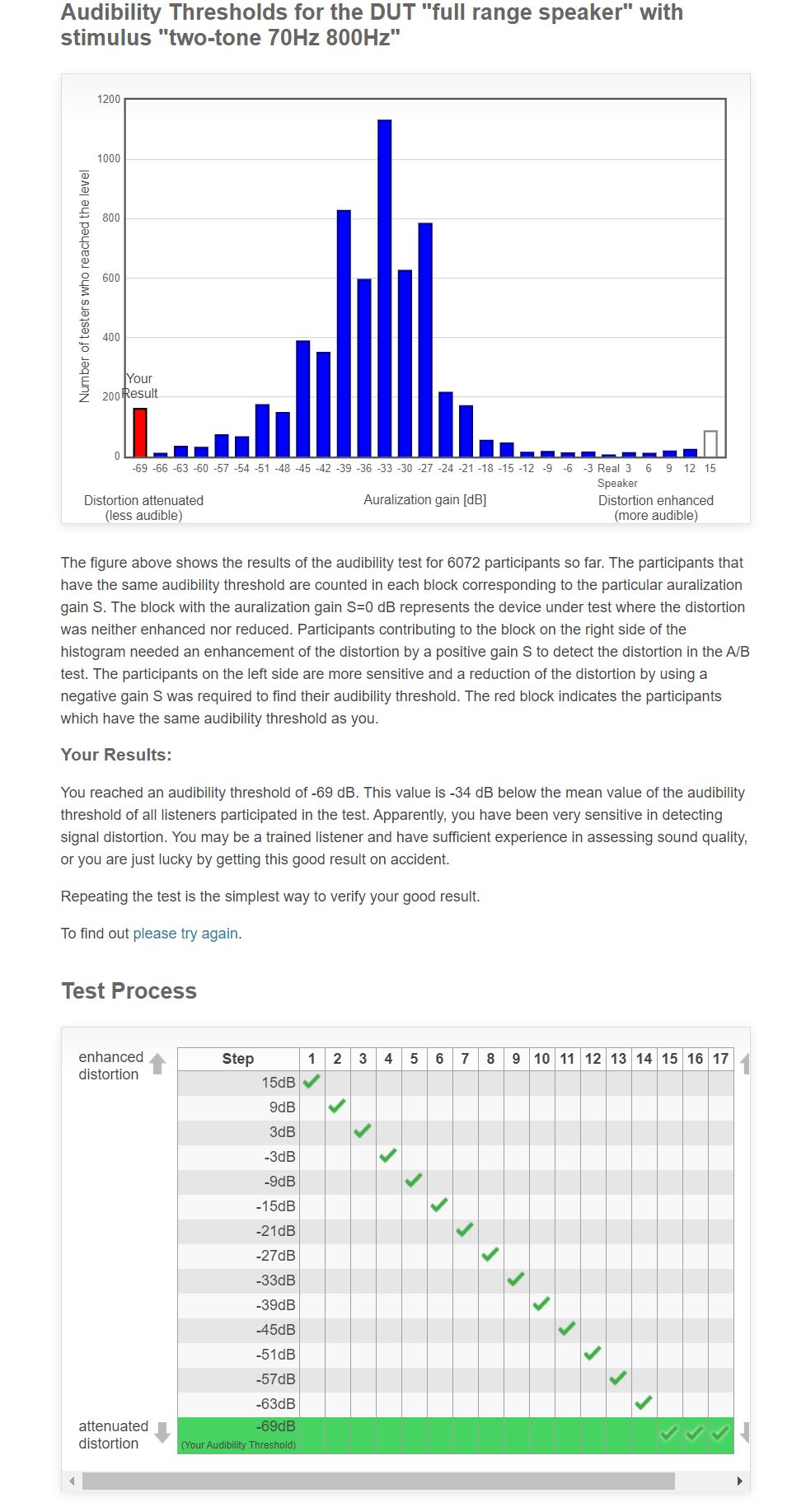 ConnorG said:
I managed to get a perfect score using STAX SR-001 Mk2 IEMs and an RME ADI-2 DAC as a source.
I found that some of the "lower" distortion tests were easier to decipher than some "higher" distortion tests. Very strange.
I think this is a great ear trainer nonetheless!

View attachment 44895
Click to expand...
Very impressive, did you try the Chapman track?
With that two-tone test, I was able to get -51dB with Fidelio X2HR headphones with an Apple dongle; only to the -20’s with the Chapman track.
Last edited: Jan 7, 2020
Master Preference Ratings for Loudspeakers

ConnorG said:
I managed to get a perfect score using STAX SR-001 Mk2 IEMs and an RME ADI-2 DAC as a source.
I found that some of the "lower" distortion tests were easier to decipher than some "higher" distortion tests. Very strange.
I think this is a great ear trainer nonetheless!

View attachment 44895
Click to expand...
What do you get with the same test Amir used? Real music was harder than the two tone test for me. 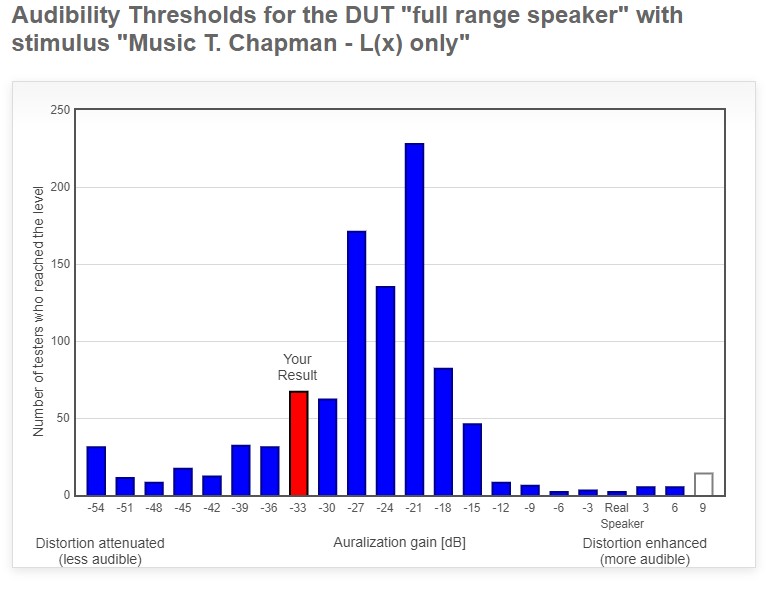 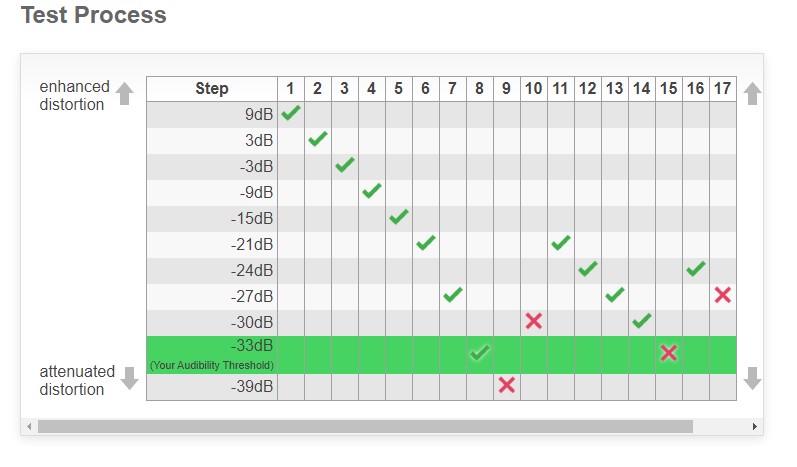 I didn't bother with the music tests, as they aren't as linear as the sine wave tests. There would be no way to get an "accurate" self measurement IMO.
On the flip side, the music tests are more "realistic" for an every day listening test

The highest danger in this test for scoring low is the used stimulus (tones vs music) and above all the used transducer/gear and experience of the tester.

You can see the higher pole on the left which means more people ace the test compared to folks reaching -48. This is no fluke. The test can be passed with excellent gear (ADI-2 and stats qualify).

None the less it is important to test ones own abilities with gear they own to see how far they get. It could also tell that person he should buy better gear or just sucks at this.
In all cases the owners of said gear most likely fully enjoy music from their systems.
People have a tendency to overestimate their hearing capabilities.
Use your ears to listen to music not as an analyzer.
X

amirm said:
Ran into this interesting listening test by Klippel with regards to how much distortion you can hear.

This is the link: http://www.klippel.de/listeningtest/lt/
Click to expand...
I tried "full range speaker -- Joss Stone."

Alas, for some reason I couldn't get the audio routed to my "proper" "home office" system (EQ/active crossovers using plug-ins in Reaper) so I ended up using my "desktop" speakers (Bose Computer MusicMonitors, normally used for system sounds, random YouTube videos, etc.) fed by on-board sound. (ESS 9023P on an Asus motherboard.)

I got to -21dB at the "second turning point" and called it a day (for now) at that point.

Useful test, but I think it would be far better if the user's choice of music could be loaded, as well as being able to customise distortion type/process.

Also worth noting, I think, that if this test uses static "waveshaping" distortion, then this may well be useful in investigating the threshold of audibility, but more sophistication can be needed to properly "emulate" the real-world behaviour of hardware. (Power compression etc. being an obvious one with loudspeakers.)
Last edited: Jan 12, 2020
X

ConnorG said:
I didn't bother with the music tests, as they aren't as linear as the sine wave tests. There would be no way to get an "accurate" self measurement IMO.
Click to expand...
Distortion is far more audible on sine waves than complex music signals. You can add what sounds like pretty severe distortion to sine waves, but the impression on music might well be relatively subtle. Distortion may mimic the ear's own non-linearities and be "ignored" by the brain, perhaps being perceived as "louder." But this does point to the problem in terms of what kind of sounds are being distorted and the extent to which masking occurs etc.
X

PierreV said:
- I love Tracy Chapman's music and found her recording to be decent back then, but I don't understand how it can be used as reference these days. In a way, it is the Lenna (https://en.wikipedia.org/wiki/Lenna ) of audio. I can see someone publishing a paper about TC's recording as being among the best in the early 90ies, others quoting that paper and using is as a standard, but I just find it OKish these days.
Click to expand...
"Fast Car" was released in 1988. The 1980s was the era of "clean" recording, and there are many tracks which sound far better.

Avoiding embarrassing myself with a selection of "disreputable" synth-pop examples, an obvious well-known example is Donald Fagen - "The Nightfly." (Vocals still sound quite coloured though.)
Last edited: Jan 12, 2020
You must log in or register to reply here.
Share: Facebook Google+ Reddit Pinterest Tumblr WhatsApp Email Link