This is a review, listening tests and measurements of the Dan Clark Expanse open-back planar magnetic headphone. It was loaned to me by the company and costs US $3999. 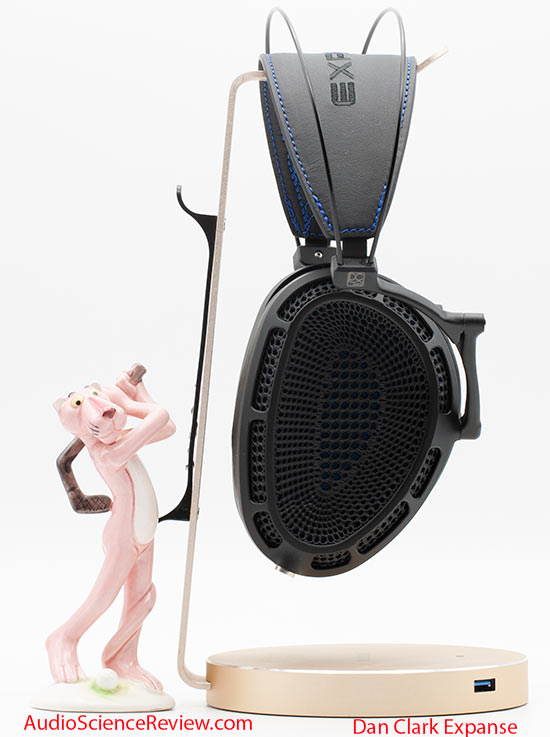 The design takes that of Stealth headphone to another level with nicely done grill on the outside. It is very comfortable to wear, nicely molding to my head. You have a choice of cable connectors (I received the balanced XLR one). The cable itself is quite thick and sturdy but nicely drapes so no complaints there. 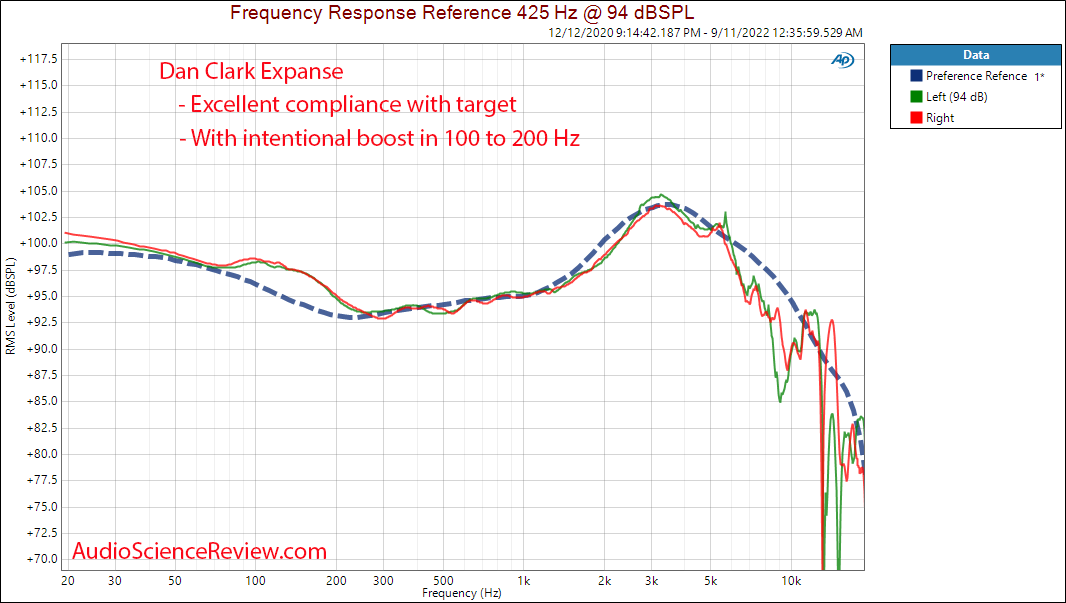 Prior to measurement company had told me that it complied with the target but that they had dialed in a boost in that 100 too 300 Hz region as you see. We will evaluate this in the listening tests. For now, compliance to the target is the best of any open-back headphone that I have tested. It is only approximated by the company's own closed back Stealth headphone.

If you do want to create an EQ, here is the relative frequency response: 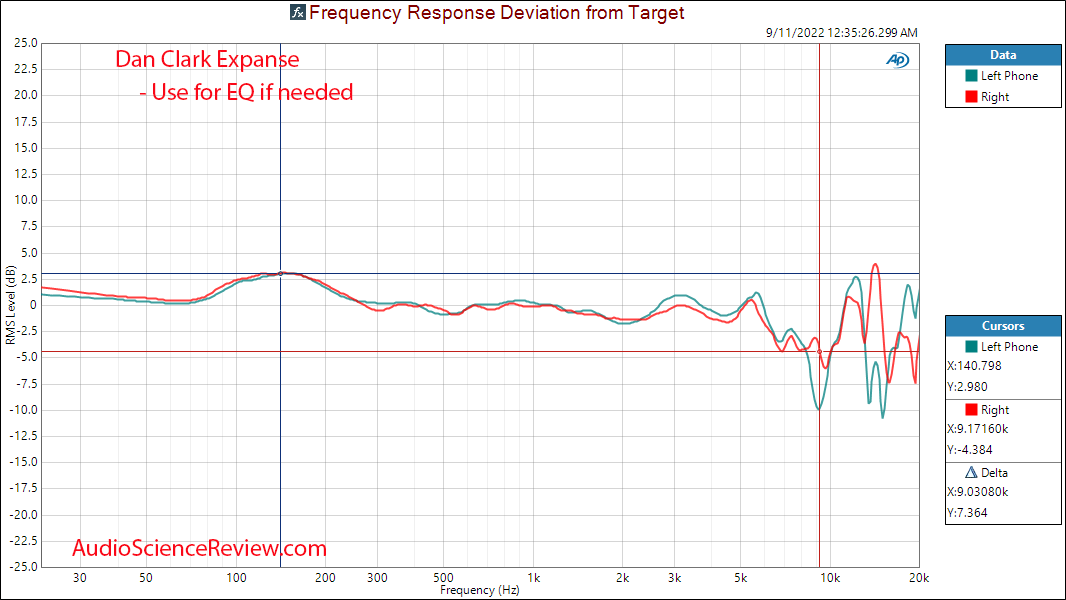 Note that measurements above 7 to 8 kHz are generally not accurate but I put a cursor there in case you want to play with that dip. Here is the group delay as areas to avoid (sharp spikes): 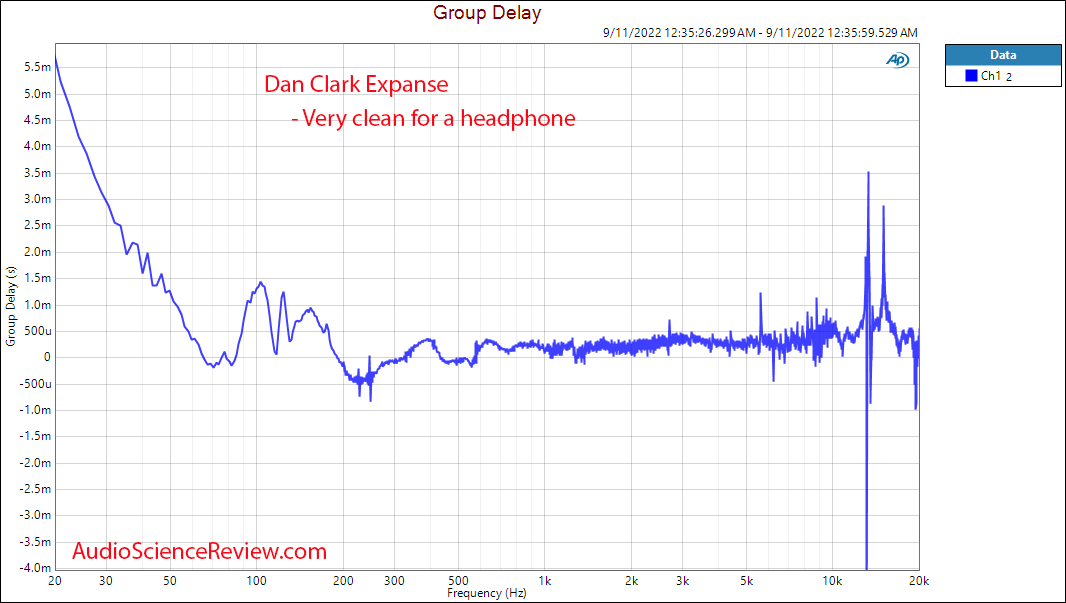 Vast majority of headphones show very messy group delay indicating mixing of phase due to reflections and or resonances in the headphone. Dan Clark headphones are an exception showing clear attention to keep these factors at bay. 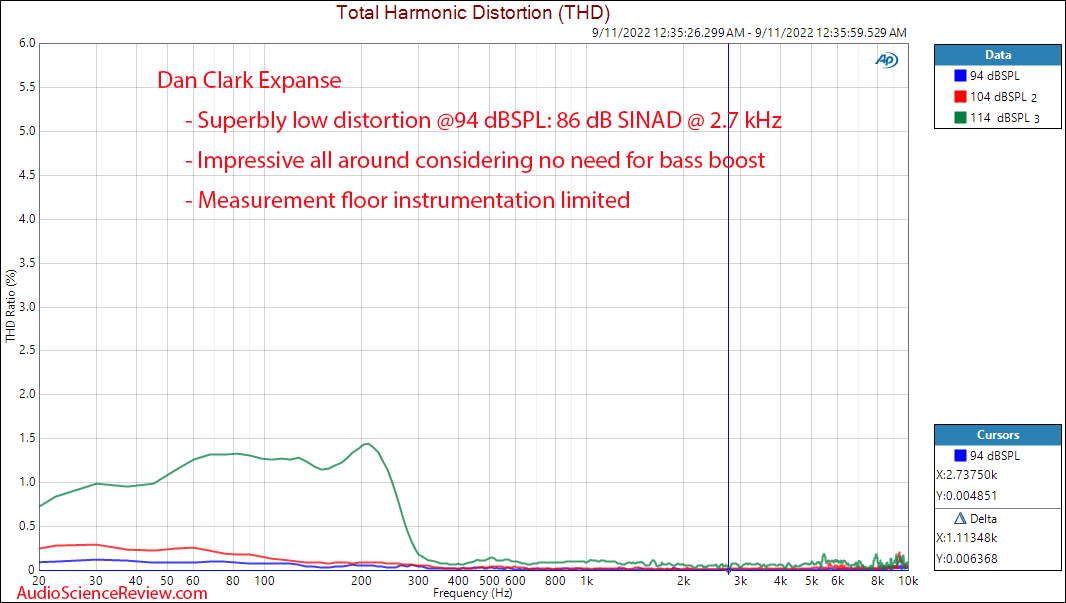 We get a SINAD of 86 dB which is limited by the measurement noise rather than true distortion of the headphone. For a transducer, it is basically distortion-less. There is a hump at 114 dBSPL but note that this headphone requires no boosting in low frequencies so that again, is excellent. Here is our absolute distortion at 94 dBSPL: 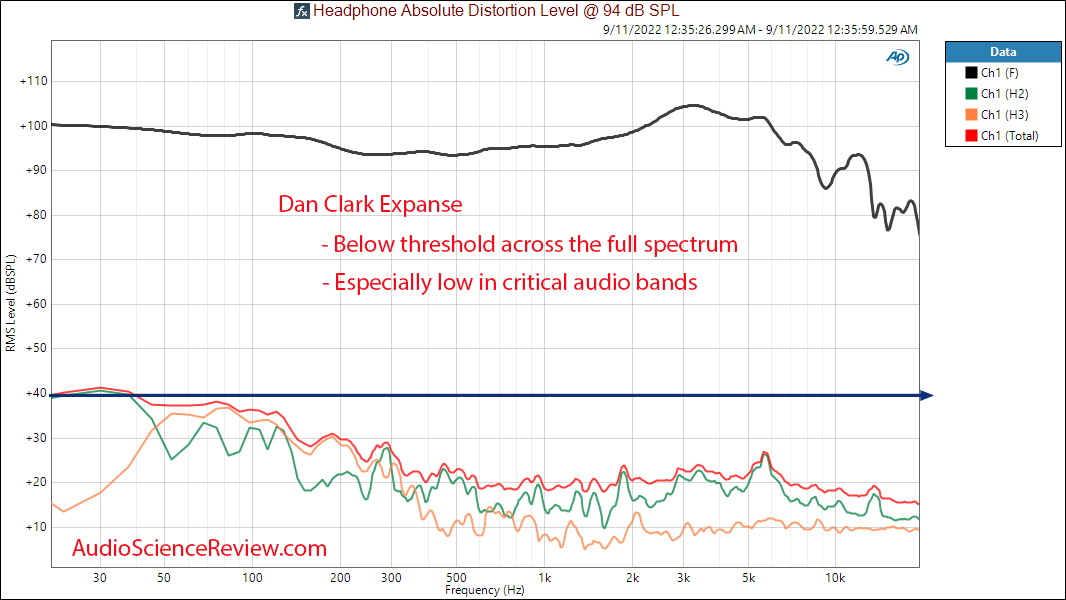 We have so much margin in the critical audible band of 2 to 5 kHz.

Impedance is a departure from typical planar headphone by showing some variation in low frequencies: 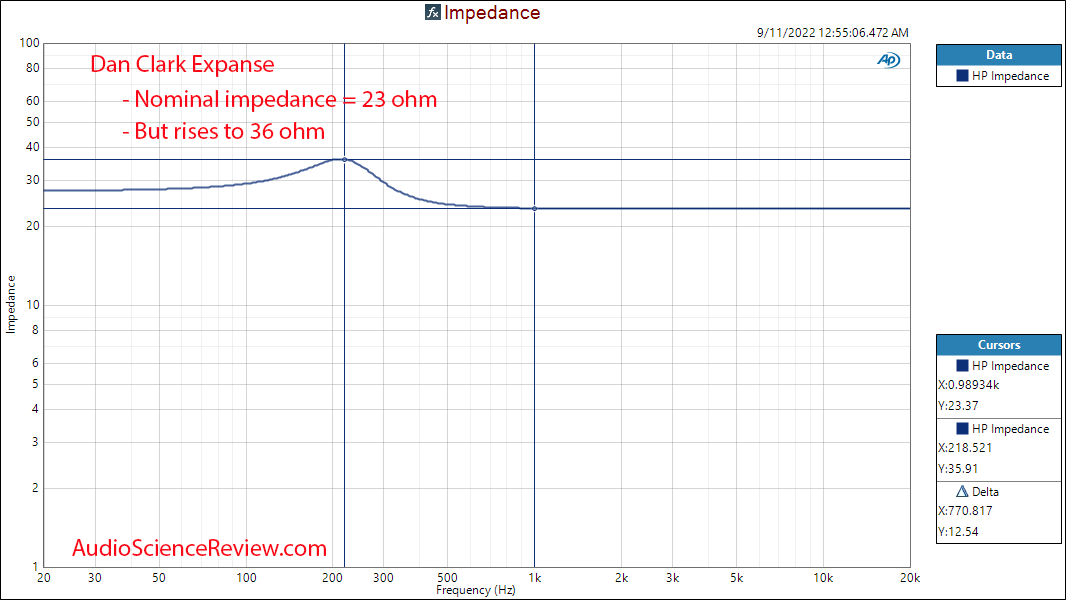 So likely some electronic components are in the path to provide the bass response we saw in the frequency response graph. Not an issue though as the variation is relatively small.

Sensitivity is very low so you better have good headphone amplification: 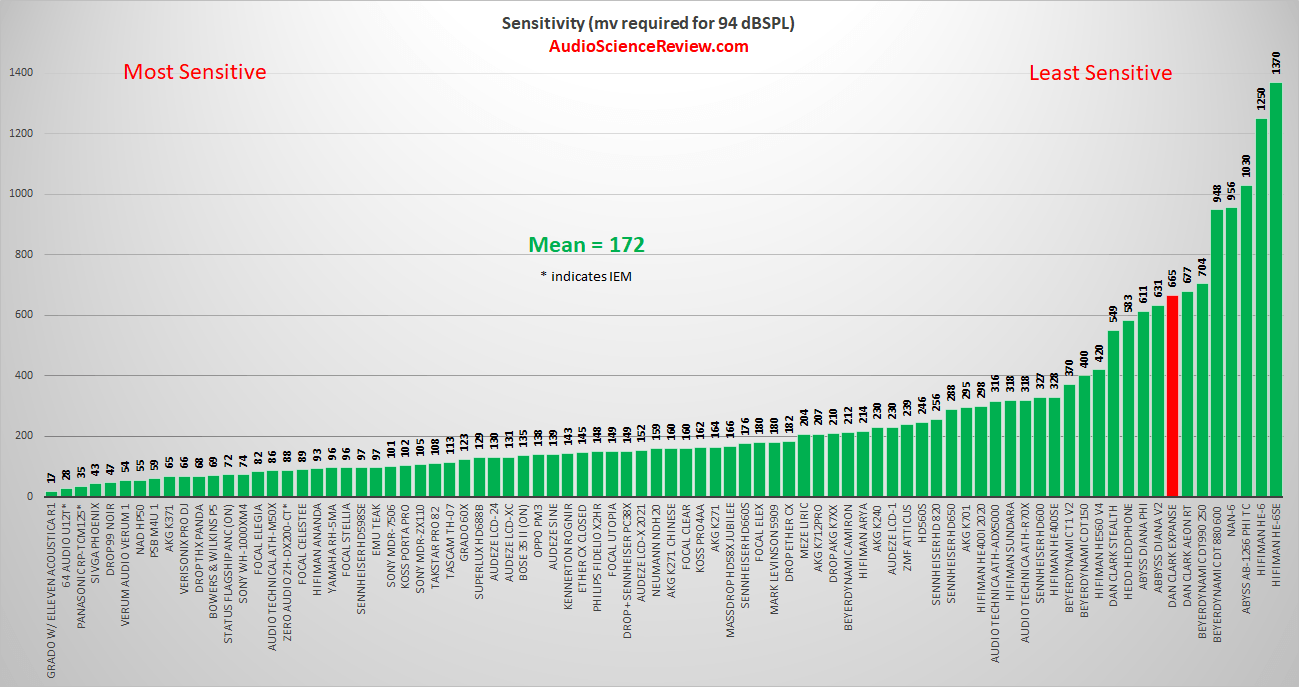 On my RME ADI-2 Pro, average listening level was about -6 dB. I could get more volume but even at max volume, I could not get the headphone to distort.

Edit: here is the impulse response: 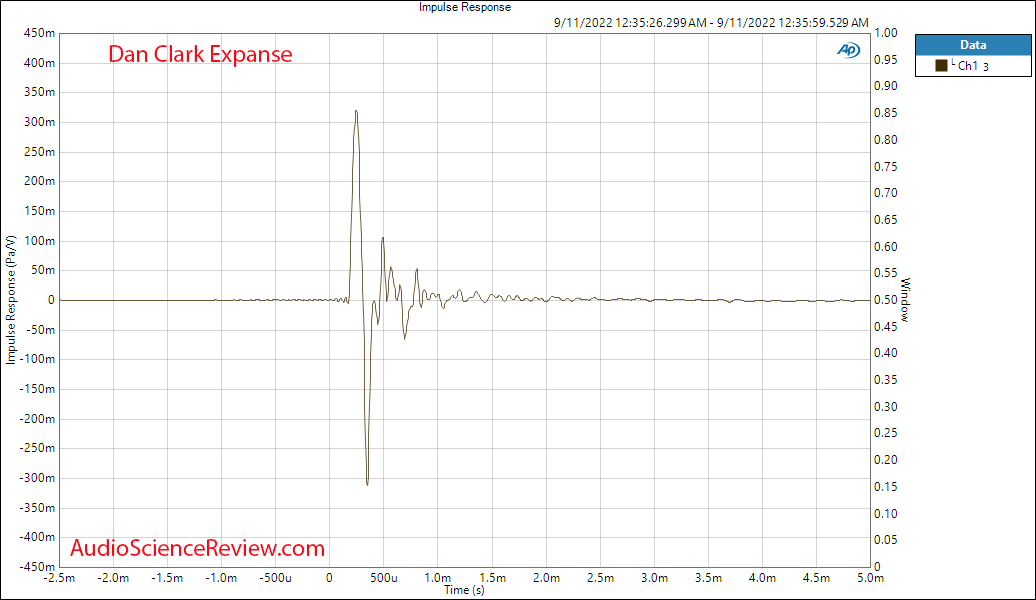 Dan Clark Expanse Listening Tests
The small deviation in bass made subjective testing critical to assess whether that is or is not a good idea. I developed a correction for the filter (initially at -3 dB but later changed to -2 dB): 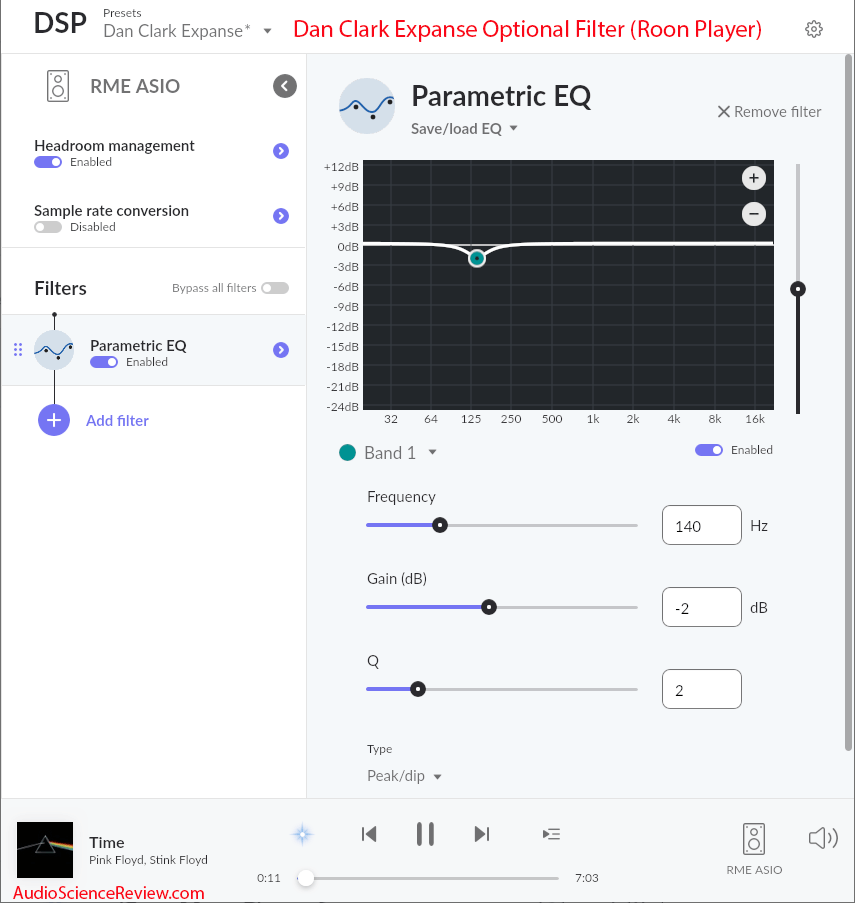 Listening with stock tuning, I enjoyed warmth that it added to my reference female vocals. Defeating it using EQ caused the vocals to stand out more, with slightly more spatial qualities. But the tonality comparatively could be said to be a bit bright. I preferred it without EQ. Moving to other clips, I occasionally would hear a bit of tubbiness which was made better with EQ. This was in cases where the tubbiness was already in the music and the boost in the response of the headphone exaggerated it a bit. Overall, I would say 70% of time of I preferred no EQ. For the others, if I didn't have EQ, it would still be delightful to listen to headphone. We are talking small differences here.

That bit aside, the superbly clean sound with very good spatial qualities and tonality that was right on the money, made the experience super enjoyable. On tonality the sound was familiar as in the sense of listening to a reference studio monitor but with none of the room modes. Low level detail was stunning at times in the way they would stand out with superb clarity.

Conclusions
What more could you ask for when a company delivers a headphone that both objectively and subjectively delivers on tonality, spatiality (instrument separation) and vanishingly low distortion? I know, you want it cheaper. But this is the price right now for this unique offering in open back planar magnetic headphones. It is times like this that makes my "job" a delight!

It is my pleasure to recommend Dan Clark Expanse headphone. Delivering on best of audio science matters and matters a lot. Company's commitment to this is admirable.

I don't really need 2 kidneys, do I?
Too many DACs> Too many amps> Too many headphones
D

If I see technical questions in the thread I'll update this post with responses so it's easy for folk to find.

Amir, how does the sound of the expanse compare to the one of the stealth?
OP

ririt said:
Amir, how does the sound of the expanse compare with the one of the stealth?
Click to expand...

I haven't had time to do a direct comparison. From memory, I say spatial qualities are better. Will do a close comparison later and report back.
Amir
Founder, Audio Science Review
Founder, Madrona Digital
Review Thread Rules
My Technical Background
My YouTube Channel

How does this DCA Expanse headphone compare to the DCA Stealth?

Very curious how they managed to engineer a low-q resonance in the 1-200hz range. Looks like a parametric EQ.

EDIT: Amir speculates they are using passive electronics to create the dip, still would be curious what that looks like. My understanding is that passive filters are rare in headphones (for some reason)
Discussions about products that are not developed with objective methods, or the people who make them, are never productive. Let's celebrate artistry in music, technical excellence in reproduction and ignore the rest.
R

amirm said:
I haven't had time to do a direct comparison. From memory, I say spatial qualities are better. Will do a close comparison later and report back.
Click to expand...

thanks . I am eager to read more about it…

Great as expected - how does it compare to the Stealth in terms of spatial qualities since it's open?

DCA has a niche product for a niche that DCA has created for itself. What bigger compliment could be given...
S

617 said:
Very curious how they managed to engineer a low-q resonance in the 1-200hz range. Looks like a parametric EQ.

EDIT: Amir speculates they are using passive electronics to create the dip, still would be curious what that looks like. My understanding is that passive filters are rare in headphones (for some reason)
Click to expand...

I wonder if the meta material is what allows them to tune in that resonance.
R

sifi36 said:
I wonder if the meta material is what allows them to tune in that resonance.
Click to expand...

I would lean towards it being a passive filter. The higher power requirement and nonlinear impedance would seem to support this. On the Stealth it was probably achieved with rear housing tuning.

sifi36 said:
I wonder if the meta material is what allows them to tune in that resonance.
Click to expand...

That would be amazing if true. Resonance is 150hz which is a sound wave that is 7.5' long.

From what I understand the 'metamaterial' we've seen are broadband absorbers but who knows. Precision small scale acoustic structures are incredible and additive manufacturing has made prototyping and manufacturing forms with complex interior cavities much easier.

@Dan Clark spill the beans. Passive filters, enclosure tuning?
Discussions about products that are not developed with objective methods, or the people who make them, are never productive. Let's celebrate artistry in music, technical excellence in reproduction and ignore the rest.

Holy Shmoly Macaroni, this looks good from an open backed headphone.......virtually none of the fine grass high Q deviations associated with normal planar headphones either......and such compliance with the curve at stock achieved the bass response of Harman with an open back without EQ - amazing, and I think unprecedented! @amirm , are the spatial qualities better than The Stealth given the open backed nature. Is there any driver or earpad angling on this headphone - I can't remember if The Stealth had angling of drivers or pads?

Super low distortion too. Hmm.....this is very nice! Boy would I like to try these!

4 grand for a headphone is laughable regardless of how it measures. there is nothing in materials that justifies this cost!

peanuts2 said:
4 grand for a headphone is laughable regardless of how it measures. there is nothing in materials that justifies this cost!
Click to expand...

Time and effort are undoubtedly a factor in the end result and in the price too.
You must log in or register to reply here.