This is a review of the "BT200" Bluetooth NFC wireless receiver + USB player. The price starts at around $8.50 from the usual suppliers of gadgets from China.

Here are some promo pics from the ads and pics of the box:

Initial observations and functioning:
I couldn't find any obvious flaws in terms of build quality of the device itself or the cables. The ports seem fine. The RCA L and R channels on my device are swapped, though.
If BT is turned off on your phone and you approach the NFC sensor it turns BT on and connects the device; if you do it again, it disconnects and turns off BT—neat. BT supports the SBC codec and it does not support AAC, aptX, aptX HD or LDAC. I've seen a claim of it supporting aptX LL somewhere, but I couldn't try that (I doubt it's true, though).
The volume setting is not remembered between power cycles or BT connection-sessions, it goes back to the middle value for BT and to the max value for USB playback—that can be annoying if you switch between the two often. The last played track from USB is remembered, though.
The buttons on the device work for both USB and BT playback. Holding forward/back increases/decreases the volume, holding play/pause switches between BT and USB. There's no way to turn off the device.
USB playback supports MP3 and WAV, it doesn't support AAC or FLAC. It plays all the files in the folders, non-stop looping the entire drive. It does not have gapless playback, but the gaps aren't big, I'd say under 0.5 seconds.
Measuring at the wall, the device uses ~0.2W when idling or during BT playback, to ~0.5W max when powering a USB flash drive. Fun fact: the included USB cable can't supply more than ~0.8W (I tried charging a phone with it). 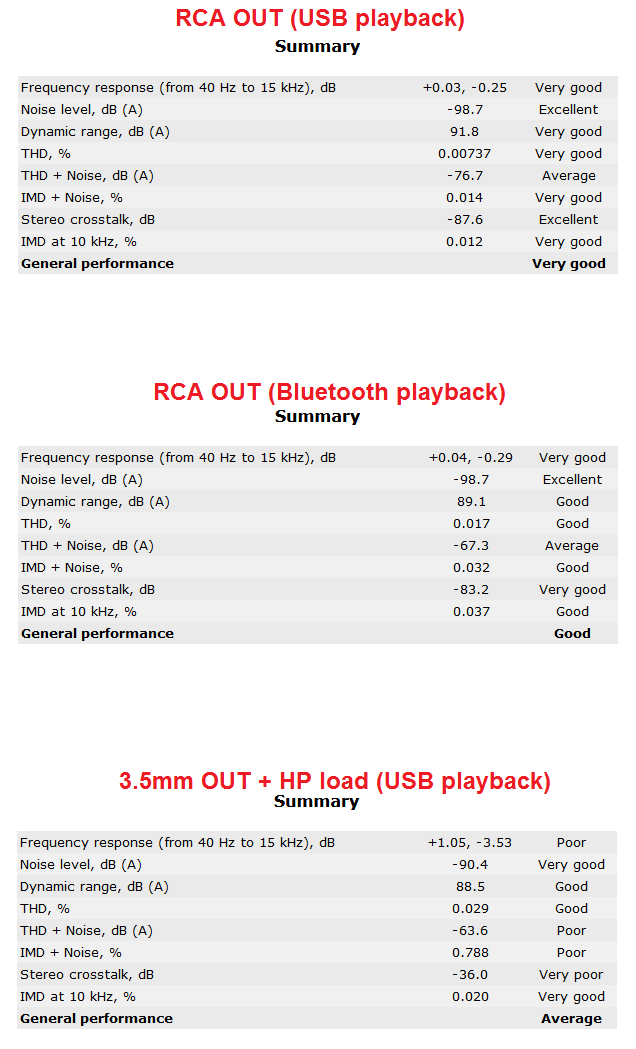 Notes on the tests:
I ran the tests a few times at max volume at both 44kHz and 48kHz. They performed the same, except for the test with the headphone load—48kHz performed better there and that's the one you see above.
The non-loaded 3.5mm output test results are similar to the RCA ones, but with about 10dB worse crosstalk.
The Bluetooth playback test involves a lossy codec conversion and obviously that's not good for RMAA testing, but I included it anyway. I also got some really bad results with BT a couple of times—IDK if because of some phone interruptions (waking the screen can make audio glitch, for example) or because of a poor BT signal in that moment. The result in the picture was pretty much best case scenario.
The 3.5mm headphone load was done with a splitter and the headphones used were Sony MDR-CD380 (40 Ohm); the freq response graph shows a sharp drop below 60Hz, a 1dB bump just above and a couple of 0.5dB bumps elsewhere.


Conclusions:
I think it does some things right. So far I've used it mostly with Bluetooth hooked to an old amp and it worked okay. It maintained the connection from my phone reasonably well, mostly even through a nearby wall or two—similarly to some BT headphones I have. I think it's good enough for casual music listening or audiobooks/podcasts from your phone. The sound quality bottleneck in that case should be the BT connection and its lossy codec, rather than the DAC of the device.
It can also be used for USB playback with decent sound quality, if you don't mind the limited controls and the lack of gapless playback.
The headphone sound quality is not good. It's not completely unusable and it doesn't sound obviously noisy or distorted, but it's kinda weak, thin and the lower bass is missing. It can work as an emergency solution, but otherwise I wouldn't recommend it for headphones, unless you put an amp in between. But to be fair, it's not really advertised as a headphone output anyway.
Last edited: May 26, 2020
You must log in or register to reply here.
Share: Facebook Google+ Reddit Pinterest Tumblr WhatsApp Email Link