This is a review and detailed measurements of the Beyerdynamic T1 Version 2 "semi-open" headphone. It is on kind loan from a member. This is discontinued but I think the cost was $1049 when available.

This is the flagship model from Beyerdynamic but to me, it doesn't look it: 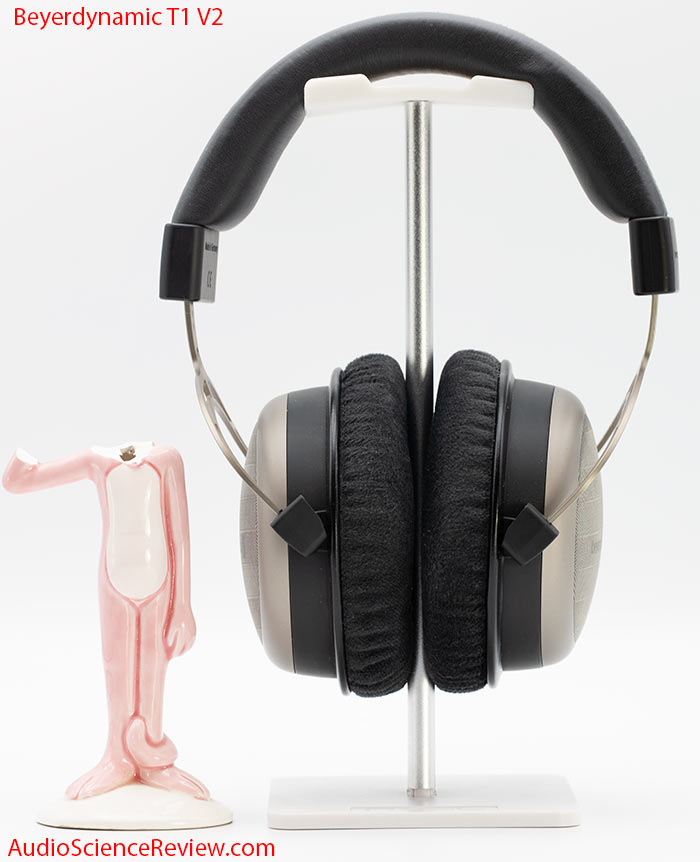 The T1 feels light and is generally comfortable. It does pinch the bottom of my ear though so pay attention to these measurements to make sure it won't yours: 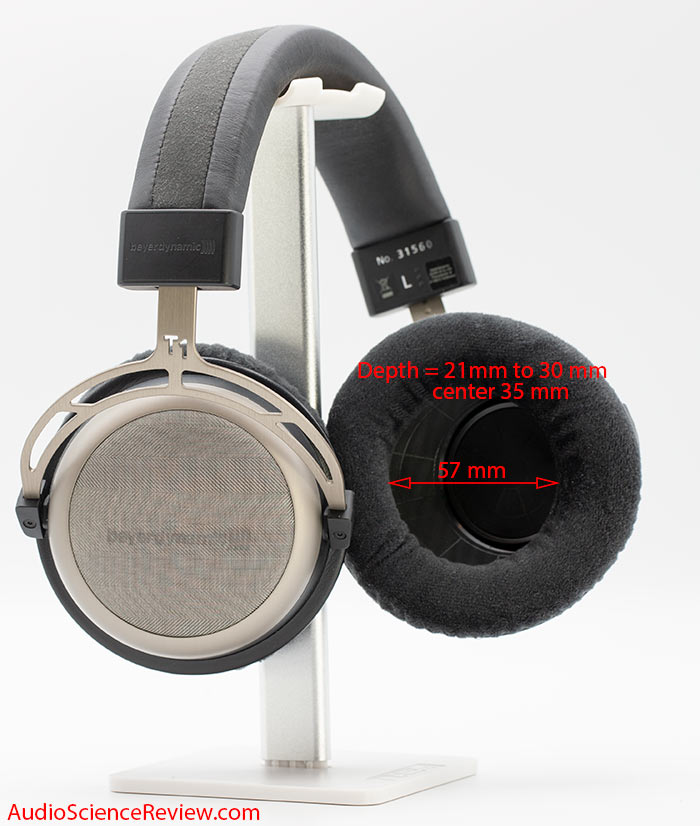 The included split, dual 3.5mm stereo jacks seems sturdy and long enough for mountain climbing! It tangled everywhere. Fortunately since it is removable you could make your own one. While you are at it, make it balanced to take advantage of higher power in some headphone amps with this type of output.

Beyerdynamic T1 V2 Measurements
Let's start with frequency response of T1 and comparison to our preference target to figure out tonality of the headphone: 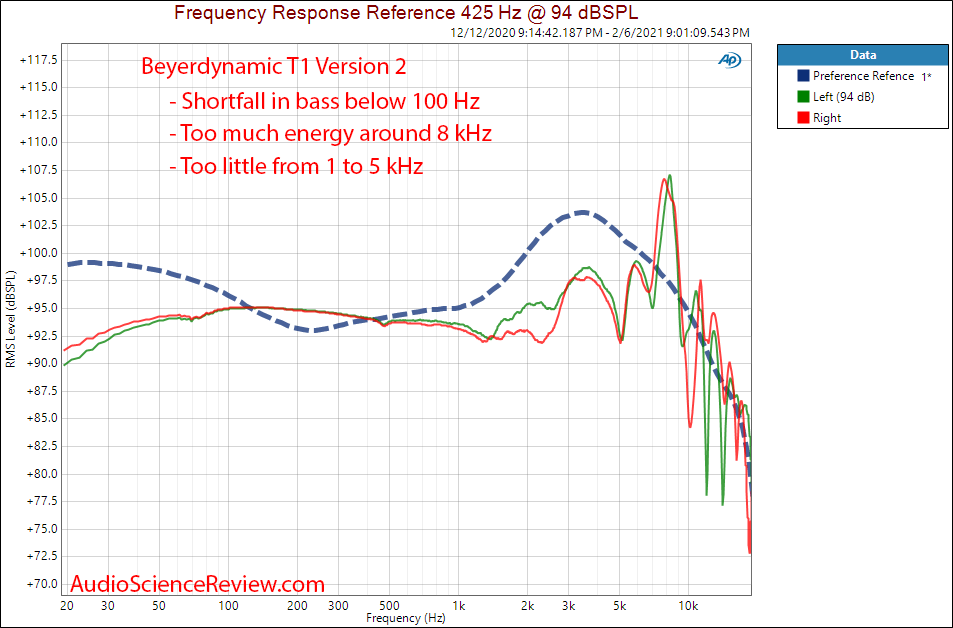 Story here is quite simple as noted on the graph. Like many headphones, bass response drops below 100 Hz so sub-bass response is going to be poor. We then get good alignment until we reach 1 kHz or so where we have good bit of deficit. This is bad as I consider this region "audiophile life of music!" Without it, female vocals feel recessed and lack sparkle. Spatial effects also suffer although the angled drivers and open back of this headphone may remedy that partially. Thankfully when it comes to high frequency accentuation, we only have one resonance peak around 8 kHz so the sound should not be bright across all content.

We can subtract the two curves and see the relative response telling the same story: 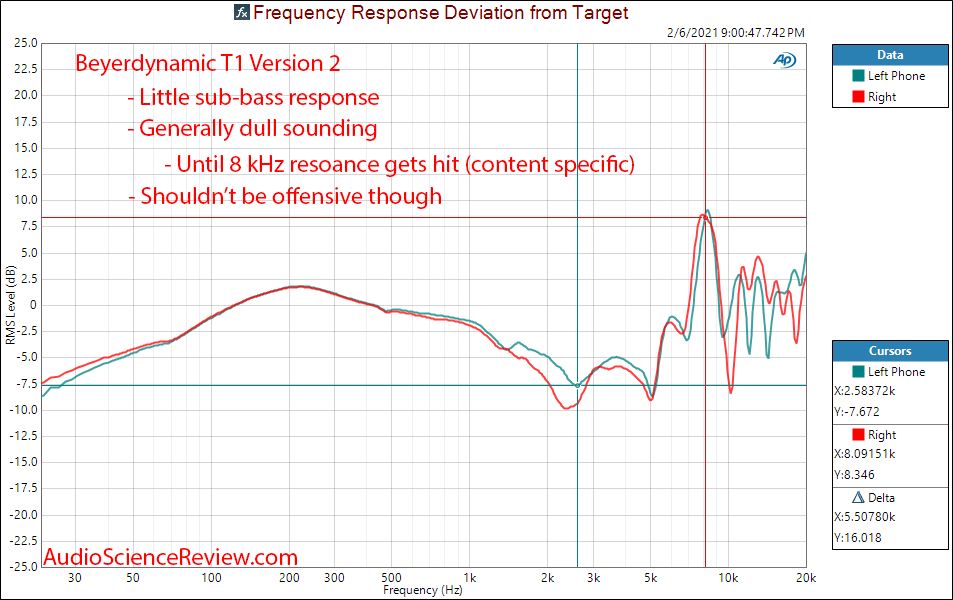 I am not happy with the amount of distortion the T1 produced especially for a "flagship" headphone: 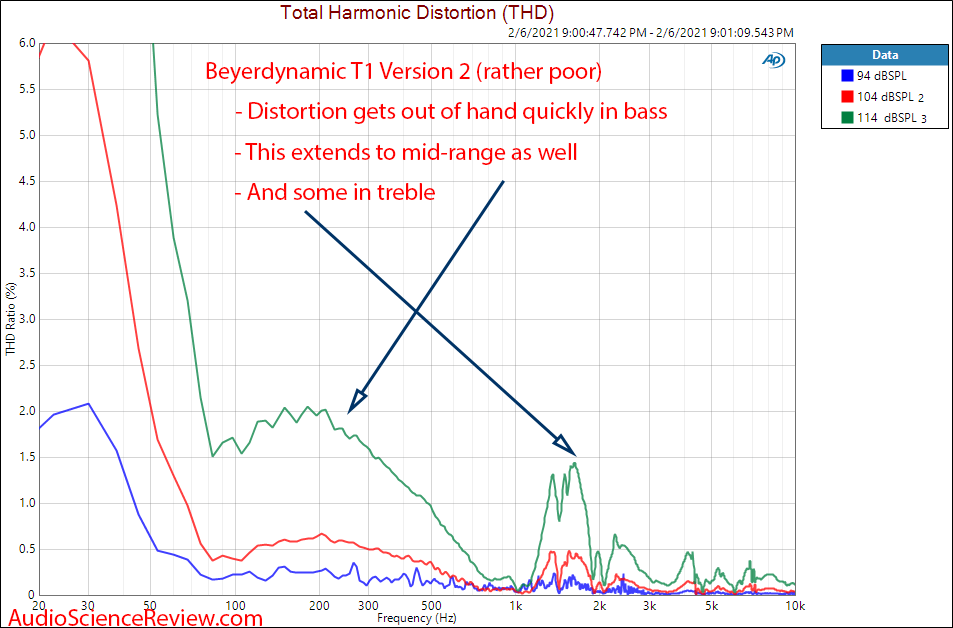 Sure, we get low frequency distortion often but here that also spreads to 100 Hz plus. And doesn't stay quiet above that either.

Group delay shows some messiness where we are showing distortion above indicating driver not responding well: 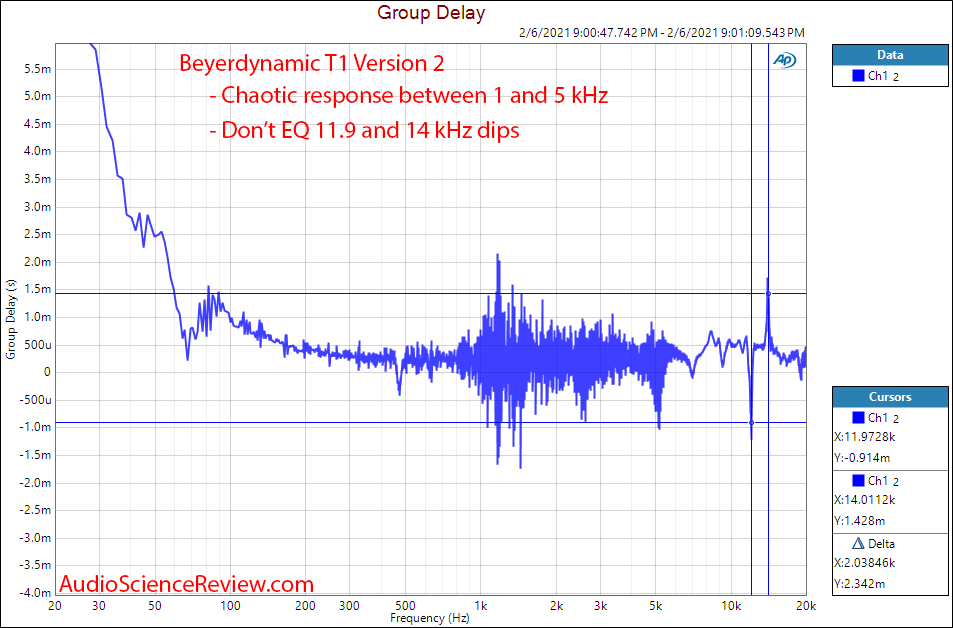 The T1 is stated to have 600 ohm impedance which is already high. Turns out that the real impedance can be much worse: 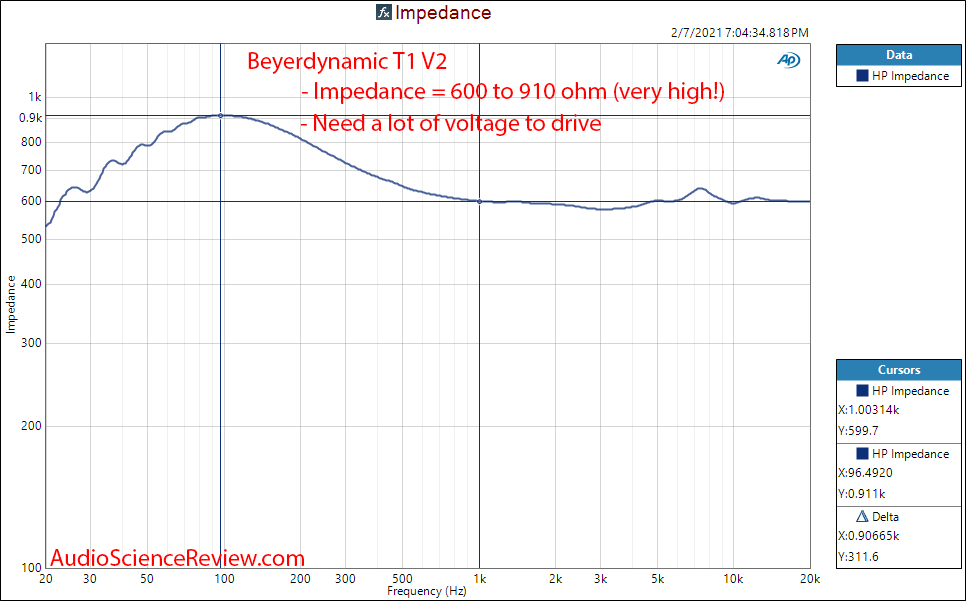 In bass frequencies where we have most energy in music, impedance rises even higher to whopping 910 ohm! This means you want a headphone drive/amplifier that does well with high impedance, i.e. produces high voltage. This rules out most portable solutions such as phones and tablets. So even though sensitivity is not too crazy: 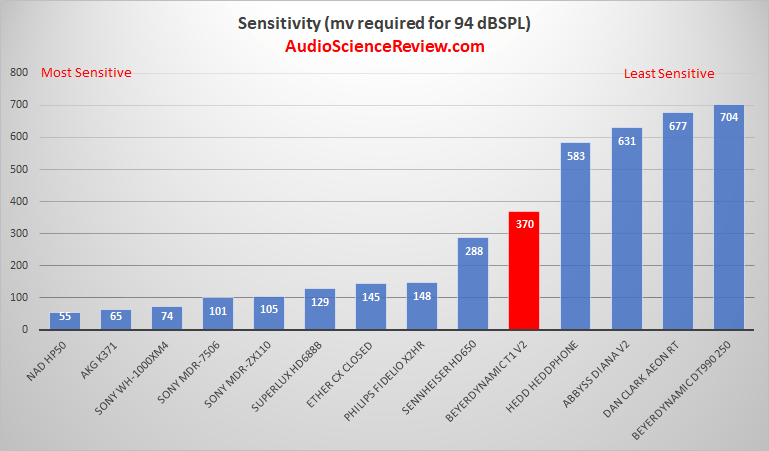 You still need to have very good drive for this headphone. I noticed that the third generation one is rated at 32 ohm so they seem to have learned their lesson here.

Beyerdynamic T1 V2 Headphone Listening and Equalization
As I had predicted, general experience was decent with this headphone. The sound was not exciting but nor was it annoying unlike the DT990 I recently reviewed. I thought then it would be a walk in the park to boost the lows and mid-frequencies and pull down that dip with EQ: 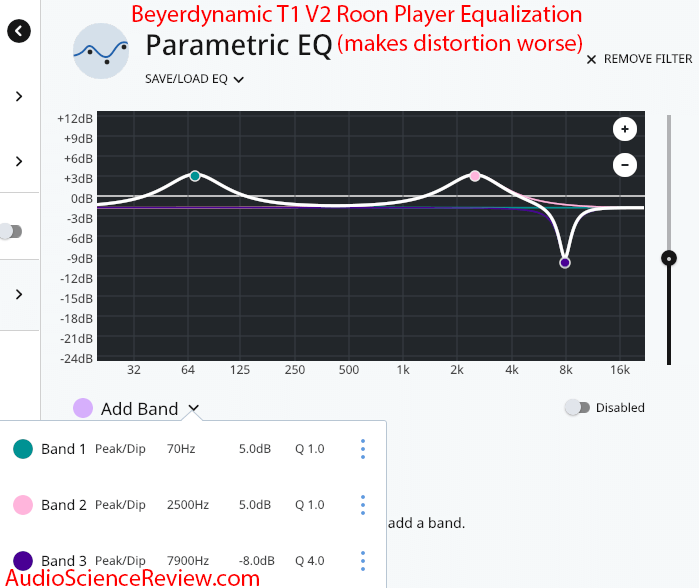 The results were indeed quite positive. The sound now had that sparkle I look for together with better bass response. A few tracks into testing though and boom, I hit on this same warbling distortion I experienced with the DT990. This was on a section of vocal. Shut off EQ and it reduced the amount but it was still there. Turned the bass EQ on and off and it had large impact on this distortion. Now I was stuck. Without bass EQ, the sound was somewhat bright now and of course we didn't have satisfying bass. With it, three tracks would sound good and all of a sudden I would hear this distortion which would pull me out of music.

I tried to tease this out by running different tests such as intermodulation, etc. While they showed the T1 to have more distortion than some other headphones, it did not show the problem clearly. So I resorted to listening. I fed the output of RME ADI-2 DAC to Topping A90 in its high gain mode so that I could really crank up the volume (!). Once there, I could hear the same distortion whenever there was a rich spectrum of low and high frequencies. At lowest volumes, it would be barely detectable. Turn up the volume to medium and you could hear it. Turn it all the way up and it would become horrendously distorted. A bit more and it would crackle. And again, that bass boost would make it much worse.

I put in some high pass filters between 70 and 100 Hz and problem was mostly there still. This tells me that the issue is the distortion above 100 Hz that is most audible. This is not a full diagnostic (that is up to the manufacturer to figure out) but enough to tell me that you can't save this headphone with EQ.

As I was running the distortion tests against some other headphones, I listened to a few seconds to AKG K371 and Ether AEON RT Closed. Oh what revelation those two headphones were compared to T1. Beautiful tonality with no sign of the distortion I was chasing above. That's when I decided the T1 is a failure.

Conclusions
I equate German engineering with excellence. When it comes to headphone design though, we need to go beyond how something is machined and manufactured. We need ultra low distortion and proper tonality. This is what an excellent headphone can deliver but unfortunately the Beyerydnamic T1 V2 is absent from the party. It is too dull without EQ and too distorted with leaving me nowhere to go. Fine, you believe different tonality but what is the excuse for high distortion in such an expensive headphone? And you made it hard to drive too so the headphone amp may also contribute to it???

I cannot recommend the Beyerdynamic T1 V2. Hopefully the third-generation version is much better. 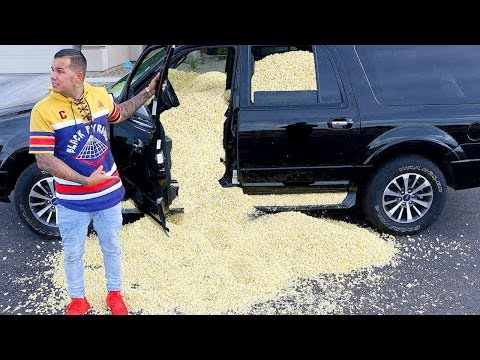 The T1 ii is literally a joke.
But do you know what's funnier?
T1 iii is even worse.

Do you think they might have been trying to hit something close to diffuse field, like B&K's 1974 Optimum HiFi or a similar in-room target? 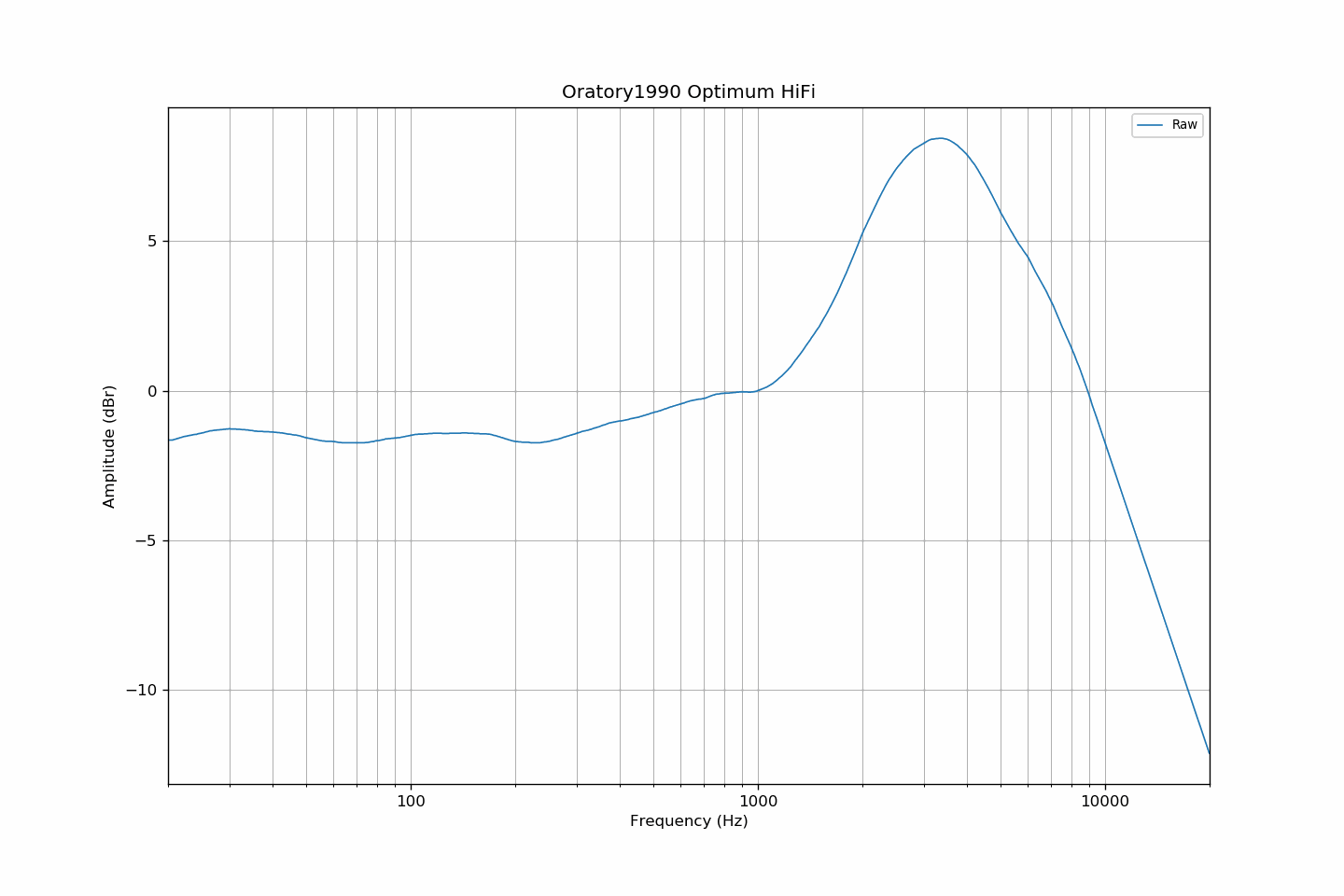 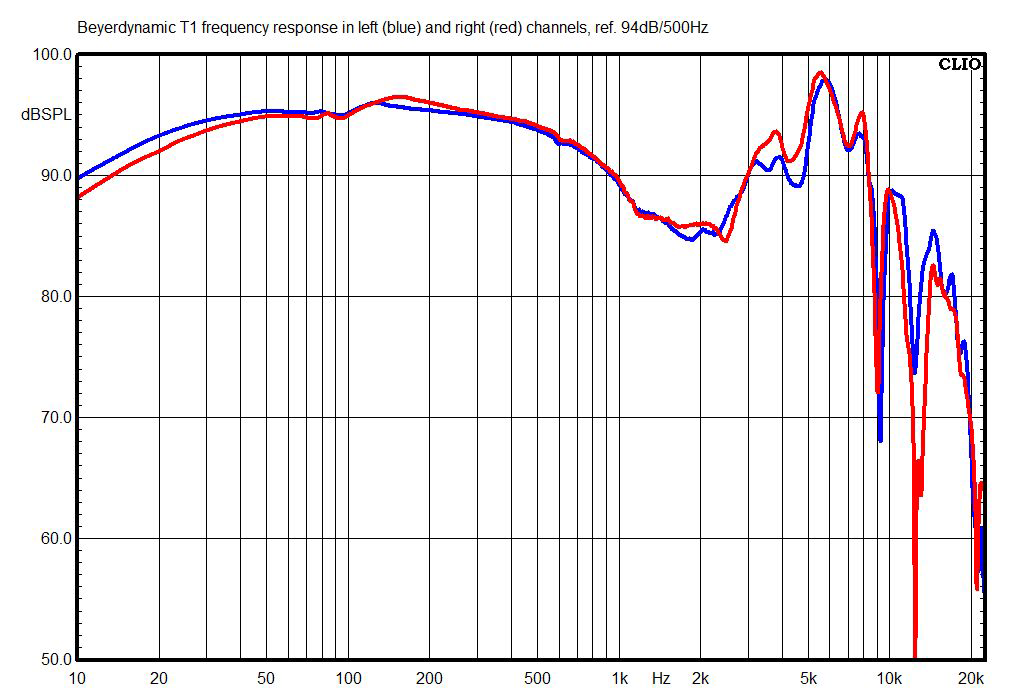 Amir called it "V2", while Jaakkopasanen and Oratory called it "2nd Gen"

FYI I started with that shelving filter like he has but distortion was even worse so I made it a PEQ.
Amir
Founder, Audio Science Review
Founder, Madrona Digital
Contributing Editor, Widescreen Review Magazine
Click for My Technical Background
My YouTube Channel
OP

Oops, I realized I had the "pre-amplifying" option turned on, which offsets the filters by the preamp.

I'll leave the previous post just so you see the difference. 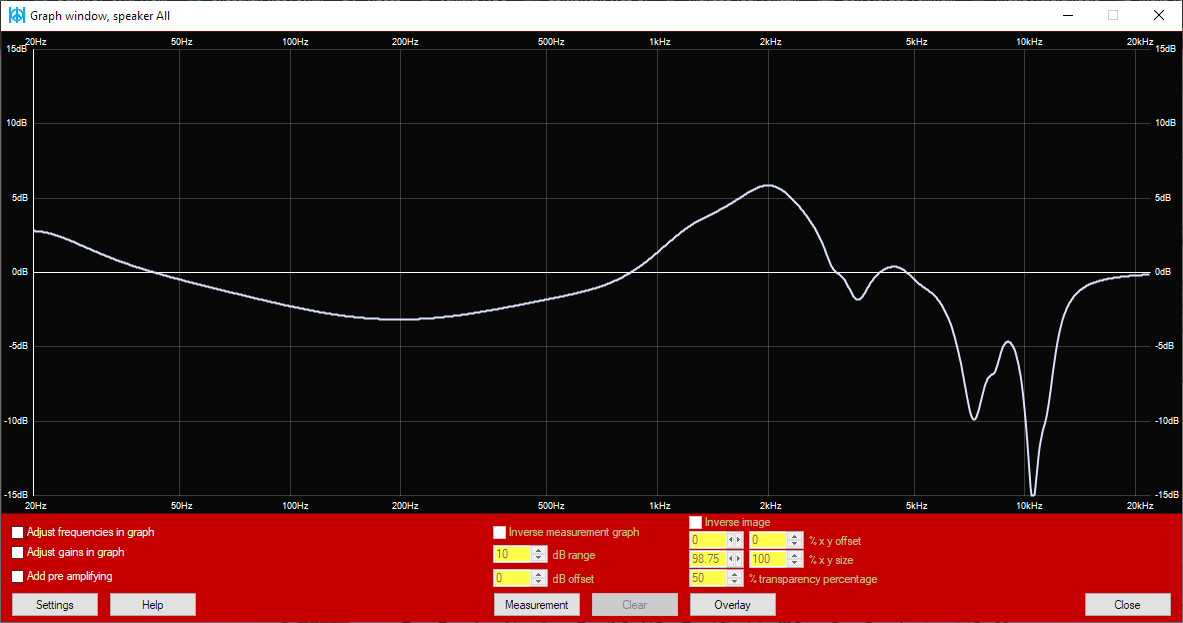 Subjective view from an owner of the exact setup used in the test (the RME and the Mk2).
Being an aging (53.) daily headphone listener for many years, this test result is unexpected for me as far as distortion goes, but for the other part (FR) about as expected. Yes it is "power hungry", for the RME no problem, but possibly so with less potent amps. All Beyerdynamic headphones have some treble emphasis, and I have a preference for them because of my aging hearing, and because I'm skeptical about "one size fits all" headphone EQ, from an anatomical/medical and less from a technical point of view. I've written more about why that is elsewhere in this forum, and am interested in your opinions: https://www.audiosciencereview.com/...-of-headphone-listening-loose-thoughts.19996/
As a sidenote, I have no idea, how the manufacturer can generate these data (I hope that their stated parameters are not freely invented) https://north-america.beyerdynamic.com/t-1.html#!#product-technical-data
R

I don't get the concept of that Mk3 either. With top end headphones, you wish for a decent damping factor, meaning high impedance headphones and a low output resistance amp. And then they make a low-impedance "flagship", what the actual... ? I think they're catering to deep-pocket mobile stuff fans, but I wouldn't want to walk the streets with the size and weight of a T1 on my head, really
How good or bad the Mk2 really is for its owner, will largely depend on the listener's "hearing age" and ear anatomy. For me, this is a completely underestimated factor (or one not taken into account, because it's not of technical nature and as such not known to many engineers - see link in above post).
Last edited: Feb 8, 2021

When even EQ can't save you...
Exponential patterns of reality
OP

respice finem said:
because of my aging hearing, and because I'm skeptical about "one size fits all" headphone EQ, from an anatomical/medical and less from a technical point of view.
Click to expand...

Give that eq a try and report back on what you think. The depressed 1 to 5 kHz is not good for anyone. Indeed if you can't hear the higher bits, you would want to hear this range.
Amir
Founder, Audio Science Review
Founder, Madrona Digital
Contributing Editor, Widescreen Review Magazine
Click for My Technical Background
My YouTube Channel

Thanks once more for saving us from a $1000+ disaster!

Your new Headphone reviews certainly reinforce your decision to equip to test them appropriately.

Keep them coming! My favorite, and to me most useful reviews at this point in my own equipment sort out..

Thanks once more for saving us from a $1000+ disaster!

Your new Headphone reviews certainly reinforce your decision to equip to test them appropriately.

Keep them coming! My favorite, and to me most useful reviews at this point in my own equipment sort out..
Click to expand...

The measurements can be found anywhere by anyone. But it's the message, the brutality, the opinion that really made it.
With most others it's like 'oh great measurements' and that's it. Crinacle does this somewhat but nothing like Amir.
M

Here you can listen to it
YT comparing Beyers

HP users may be well aware of this site. How does it rate?
Einstein: If you can't describe it simply, you don't understand it well.
Wombat: Or your explanatory skills are deficient.

HP users may be well aware of this site. How does it rate?
Click to expand...

They don't use standardized test equipment. So I would say omit on overall rating. Only read impedance related and relative measurements. Like how much power it needs, how much frequency response varies with output impedance Those are pretty good.
You must log in or register to reply here.