Bass arriving out of phase at the listening position

Hi, tried to look info on this line of thought^, how sound source "feeds" or triggers a mode, but didn 't find anything to feed imagination I tried to reason over the issue and got to a line of thought similar to what theSuede wrote. When mode gets going thats it, and if either speaker is not in sync with it the situation happens as in this thread, direct sound of other speaker is trumped by the mode initiated by perhaps the other speaker and fed by both. When setup and room is symmetrical both sound sources feed modes similarly and such issue is absent? There would be peaks and nulls but either speaker response at listening spot would be similar to when both playing simultaneously.

If this is true then fixing, or at least normalizing the situation, would require identifying which mode it is and placing speakers symmetrical to the mode? This might make other issues. Well, anyway.

What do you think is happening?
T

@daftcombo: Then you have a 40Hz resonance between the listening room and the general "outer space" outside that corridor.... That resonance could be either acoustical or mechanical (structural). No matter which, any brick wall filter can/will sound strange in some circumstances. Sorry, can't help you there. If you have the processing to do it, and you aren't dependent on group delay, try a linear phase FIR filter? A 48 or 96dB pole filter will have extreme group delay changes in the crossover region.
T

The basics of the math behing the Klippel NFS is rougly evolved from that, find a complex matrix of delay values that when convolved with the measurement results from lots of different positions separate direct sound and reflected sound. It's a lot worse in error margins (due to numerical instabilities) compared to a real anechoic chamber, but more than good enough for almost everything we do.

theSuede said:
If you have the processing to do it, and you aren't dependent on group delay, try a linear phase FIR filter?
Click to expand...

Thanks, but I'l already using a 96dB/oct FIR filter!
G

But the bass doesn't only sounds lacking, it sounds weird on some tracks. And that echo to what @ernestcarl wrote in a previous post in which he said that a 48dB/slope sounds better. But why?
Click to expand...

Hi, may I ask how many taps you are using, and at what sample rate?

gnarly said:
Hi, may I ask how many taps you are using, and at what sample rate?
Click to expand...

Thx. That's what i use too, although at 48kHz, so I have slightly less frequency resolution than you.
16k taps is the limit that my processor allows (qsys).
Are you using PC convolution?

fwiw, i think a linear-phase high pass for subs is the wrong way to go. It's clearly a source of pre-ring in measurements, and i really think i hear wonky stuff sometimes down low.
So, i'm a believer in sub's high pass being IIR. For a while, I tried embedding an IIR high-pass into the sub's otherwise linear phase FIR file. That helped, but I think mainly due to the IIR high-pass simply having to be low order.
I also came to the realization that yes, I could imbed an IIR high-pass in the FIR filter, but it would still only have the freq resolution of the FIR filter, and not the resolution of a true IIR high-pass.
Nowadays, my subs FIR filter has no hpf, and I use an IIR high- pass before line signal goes to the FIR filter. I like this the best, because it is very easy to play with a separate IIR hpf in real-time to combat boominess in over the top recordings, and I get the theoretically infinite freq resolution of IIR. (and without any pre-ring potential).

Hope that all made sense...

Test the speakers in a different room or outside and see if you get those suck outs at 90 and 112hz.

Gringoaudio1 said:
Test the speakers in a different room or outside and see if you get those suck outs at 90 and 112hz.
Click to expand...

As long as you don't use the same seated distance, because those are common floor and ceiling bounce frequencies and all rooms probably have the same height.
My Truthear Zero EQ
OP

@NTK I am glad to report that, after fixing the absorption coefficient for wall impedance, the simulator provides results that are a significantly better match against reality: 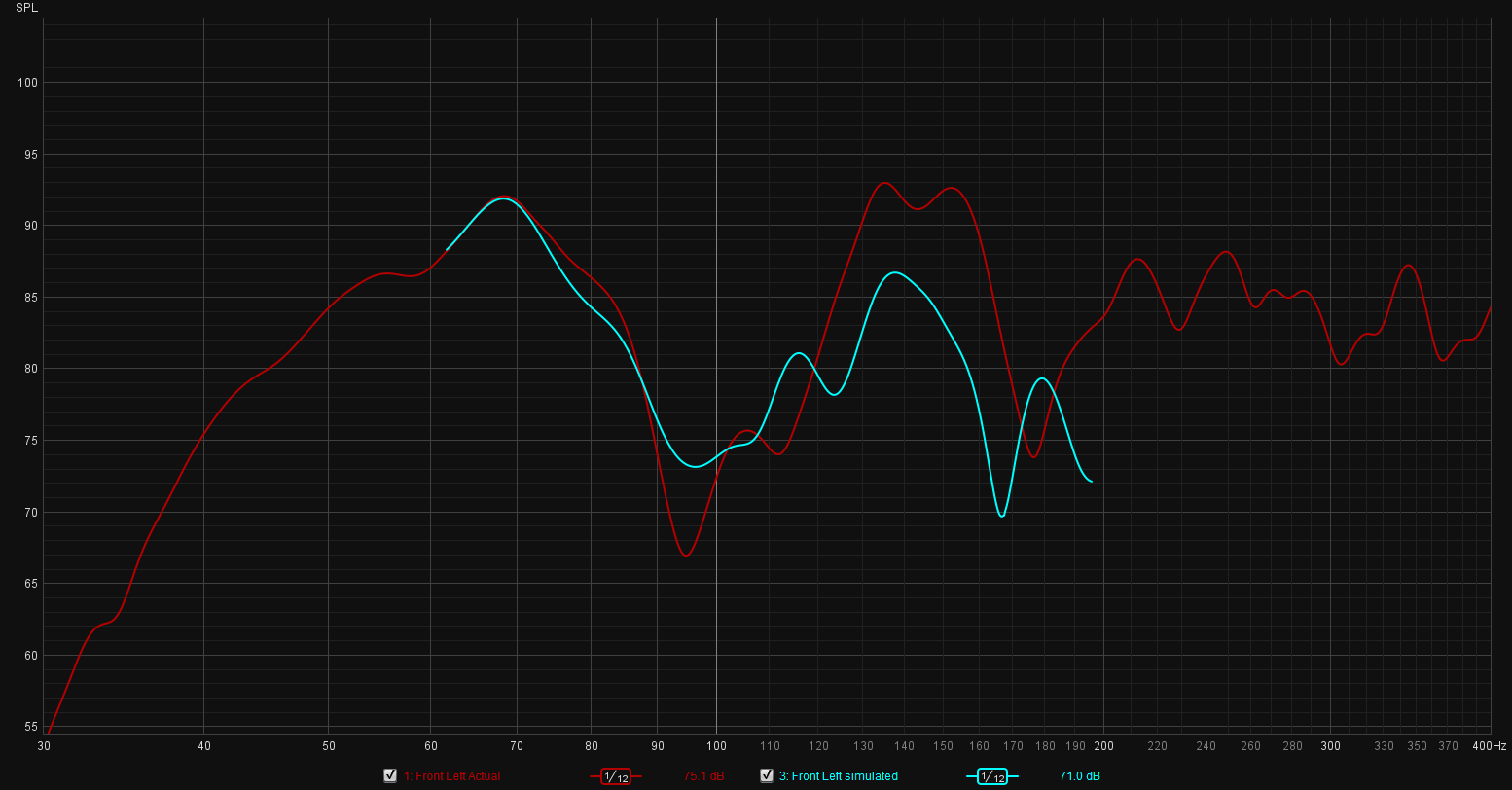 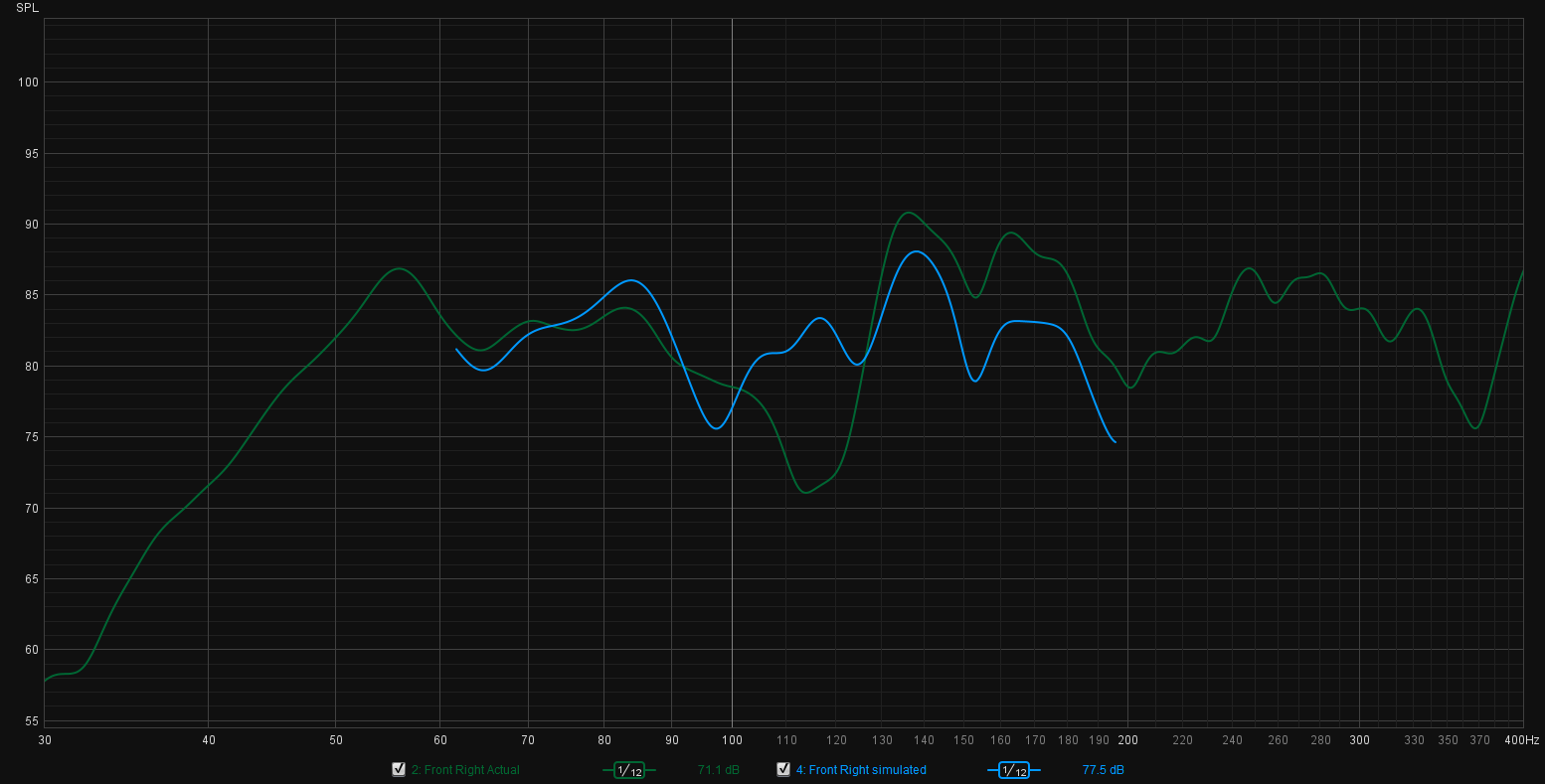 It's clearly not perfect - for example the simulator completely missed the 115 Hz dip on the right channel, which might be related to the wardrobe next to the speaker. But to me this is already quite impressive given how naive the model is (same 0.2 absorption coefficient for all boundaries, no imaginary part for the acoustic wall impedance, etc). With a little luck, it might get even closer to ground truth with a couple of low-hanging fruit improvements to the way the boundaries are modelled.

But here's the real cherry on the cake: the simulator is now able to predict the phase issue that prompted this very thread! 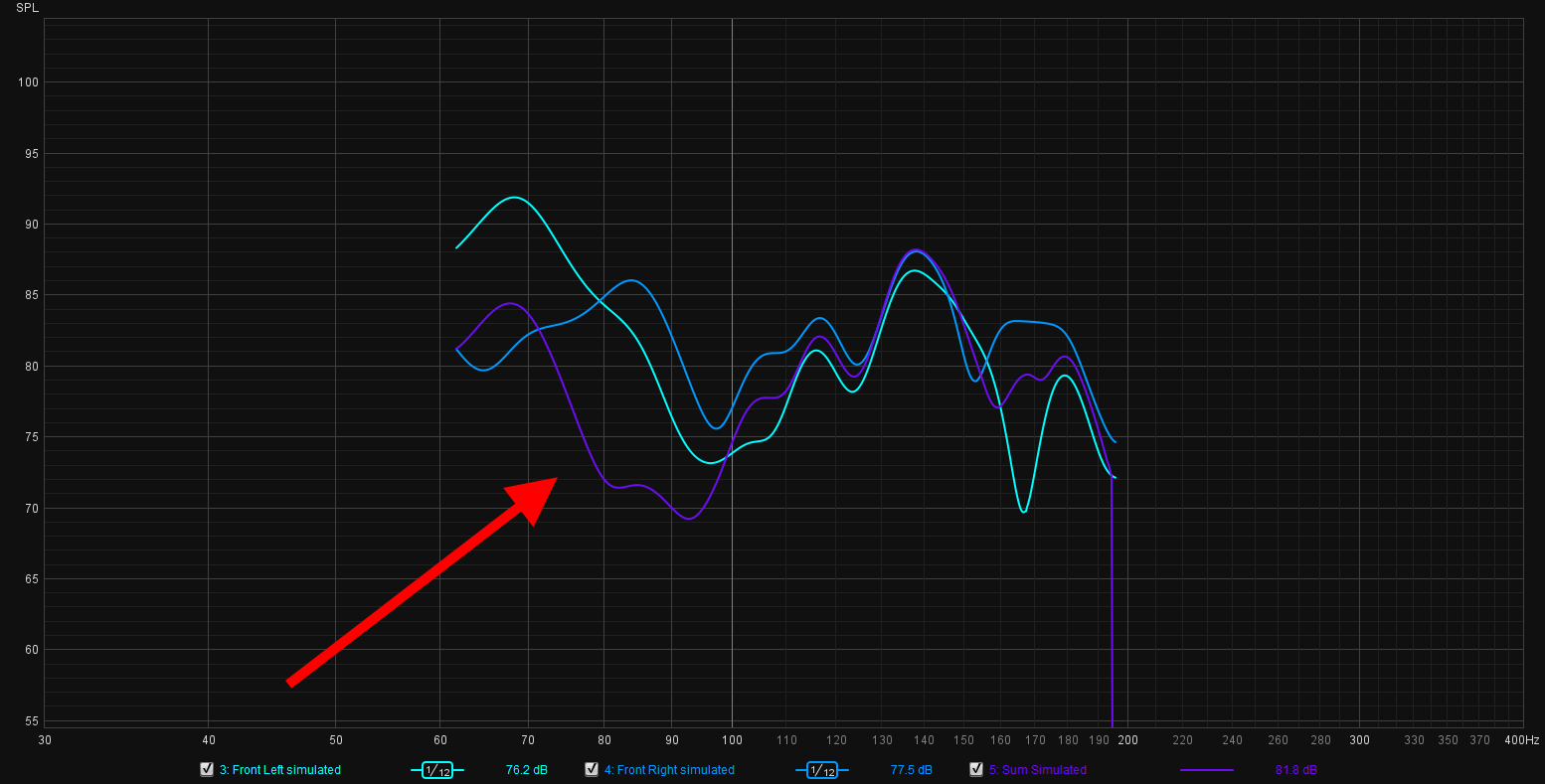 This is absolutely wonderful. I am steadily getting closer to the point where I can simulate various setups and produce results that are reliable enough to be useful.

The Jupyter notebook that produced the above is attached.

Any updates? Because I’m having kinda the same problem and not sure it is a room issue. I suspect that it has something to do with electricity. So it messes up with audio gear. Room response is just a result of that.
You must log in or register to reply here.

J
What would you do from here? (REW Graph)
2

A
When sub is further away from listening position