This is a review and detailed measurements of the Abyss Diana Phi open-back planar magnetic headphone. It is on kind loan from a member and costs US $3,995. I previously reviewed the Abyss Diana V2 so it is good to see how this sibling rates for its $1,000 higher cost.

EDIT: While the owner had told me this was Diana Phi, the markings on the driver indicate it is V2!

Unlike the V2 I tested, this sample has the stock headband: 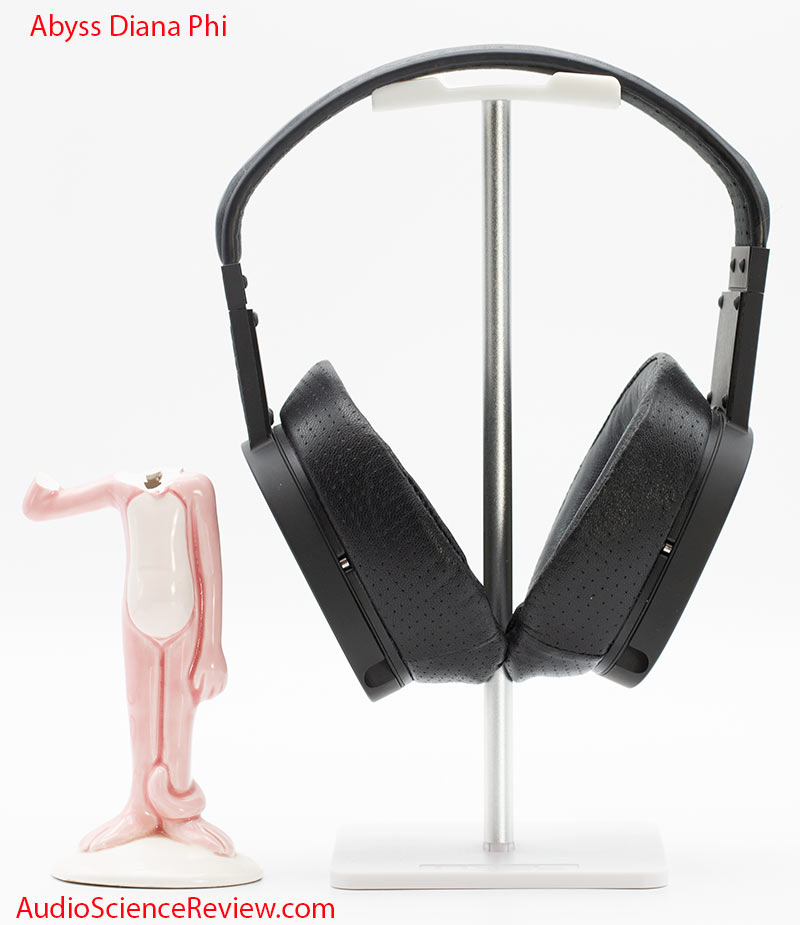 The same feeling of luxury is imparted in your hands which I very much appreciated.

The cups are magnetic, rectangular and rotate in fixed positions. I tested them as sent to me and as you see above.

The side view better shows the nice overall design of the unit (aesthetically): 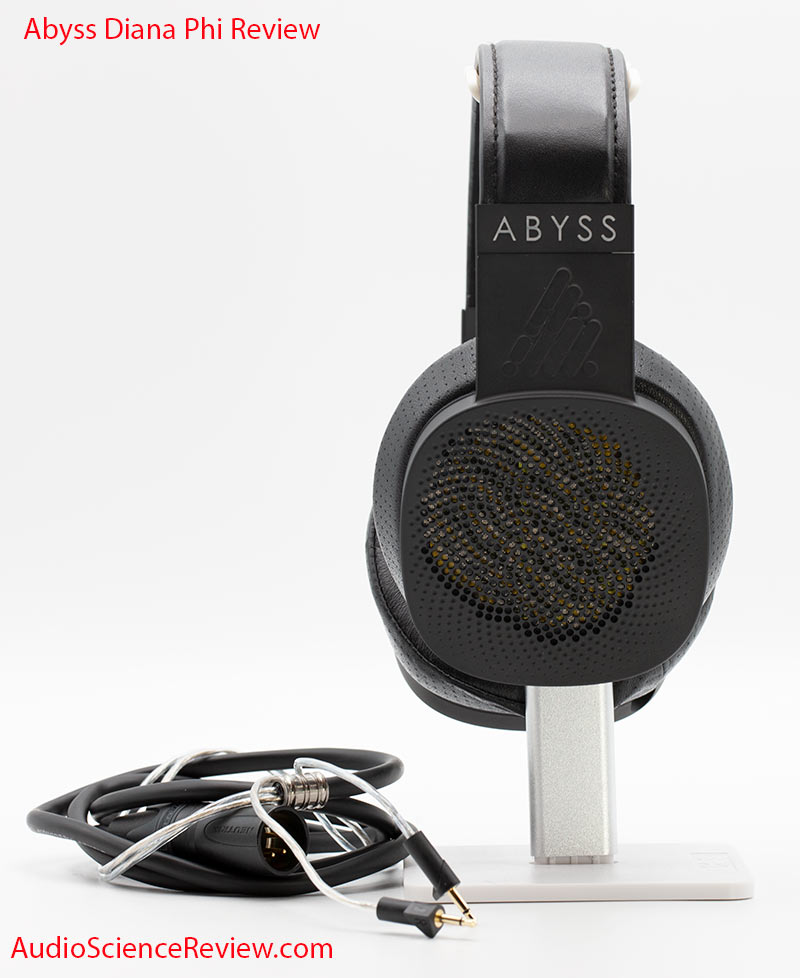 The cable was was short but was flexible and comfortable. You can order the headphone with different terminations which is very nice.

Despite its small size, the Diana Phi is on the heavy side at 430 grams: 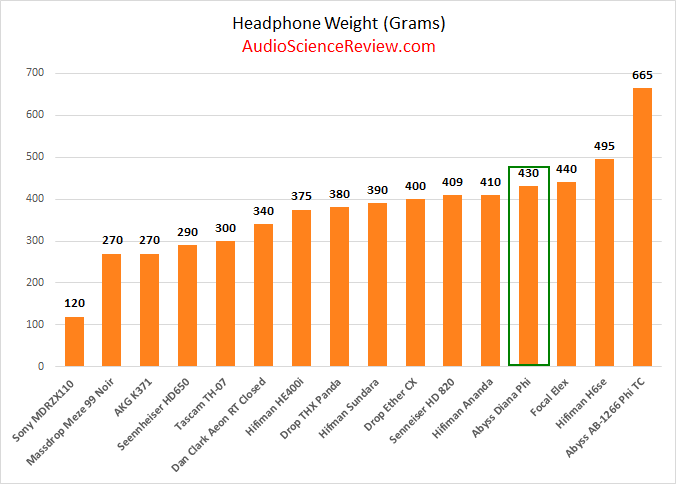 The cups as mentioned are square with inside dimension of 59 by 59 millimeters. The depth is hard to judge as they are slanted. At the highest peak they are about 27 mm deep.

Comfort was good for me. Yes, the headphones dragged a bit on my ear due to weight but not bad. Online reviews mentioned lack of comfort a fair bit. That was not my experience.

Note: The measurements you are about to see are made using a standardized Gras 45C. Headphone measurements by definition are approximate and variable so don't be surprised if other measurements even if performed with the same gear as mine differ in end results. Protocols vary such as headband pressure, averaging (which I don't do). As you will see, I have confirmed the approximate accuracy of the measurements using Equalization and listening tests. Ultimately headphone measurements are less exact than speakers specially in bass and above a few kilohertz so keep that in mind as you read these tests. If you think you have an exact idea of a headphone performance, you are likely wrong!

Fitting the Diana Phi to the fixture was very easy. The V2 was very difficult due to its padding making a huge difference. Not here. Measurements at my two frequencies matched channel to channel and level which is usually a good sign of ease of measurements and accuracy.

Abyss Diana Phi Measurements
As usual we start with our frequency response: 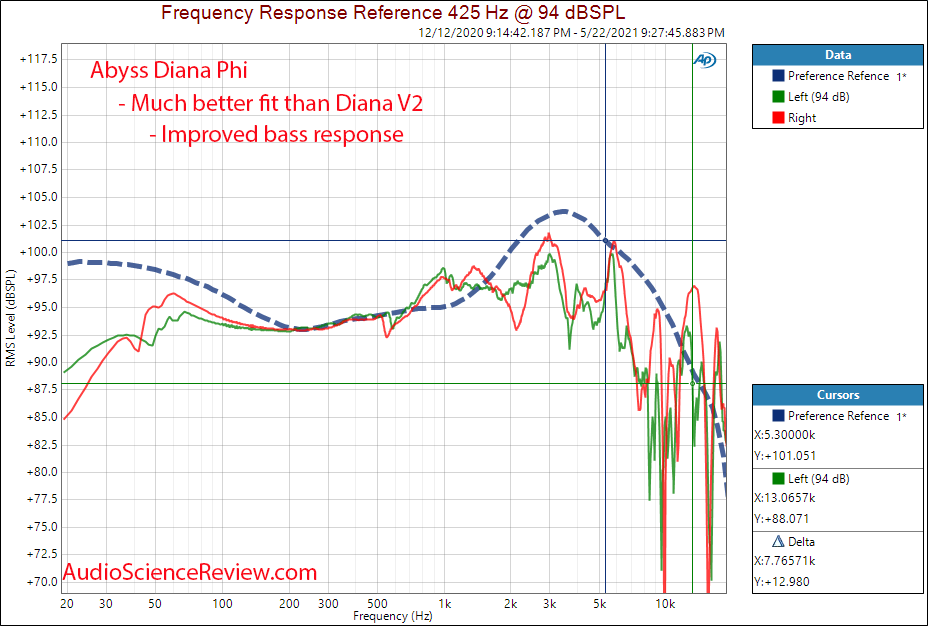 Whether it is due to better fit or inherent in the design, there is more bass here than V2. The rest of the response shares some of the same issues due like the kink around 550 Hz and then the overshoot after that. Overall response is quite ragged making developing of equalization by eye as I do difficult: 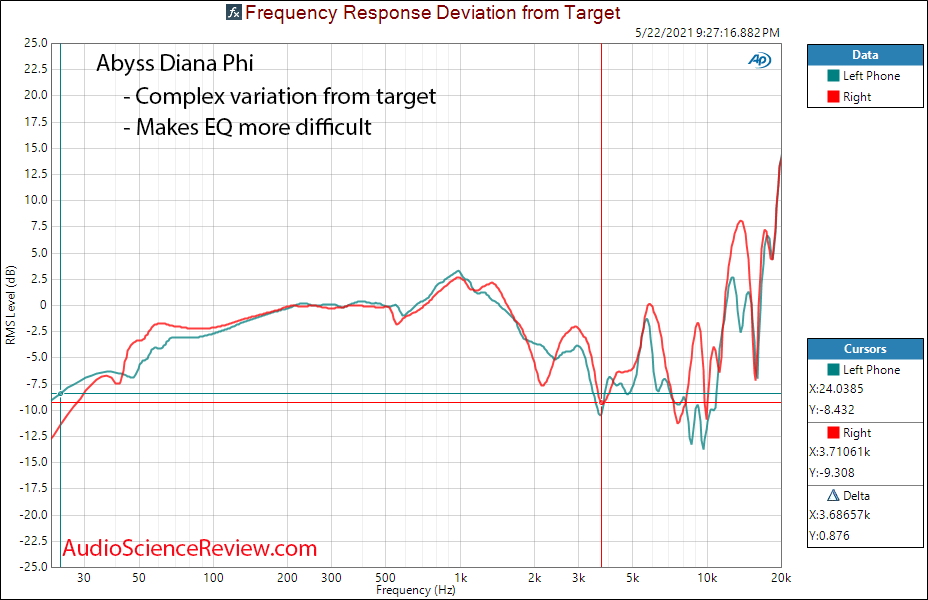 When we look at the distortion, we see the "trademark" high levels we are used to seeing with Abyss headphones with the Diana Phi being the worst of the series: 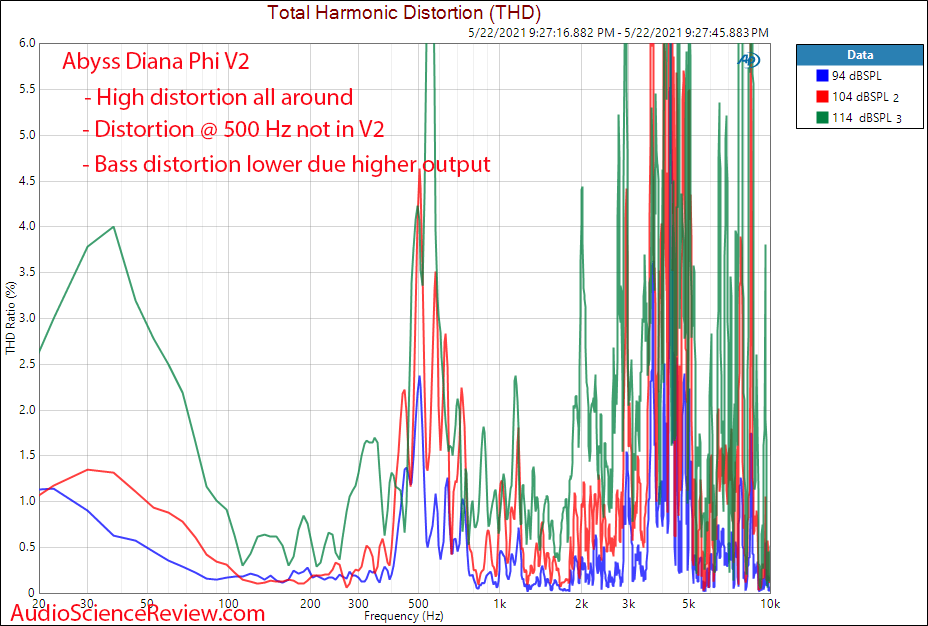 This is stunning level of distortion. Even at 94 dBSPL we get plenty of distortions where many headphones nearly hug the zero line: 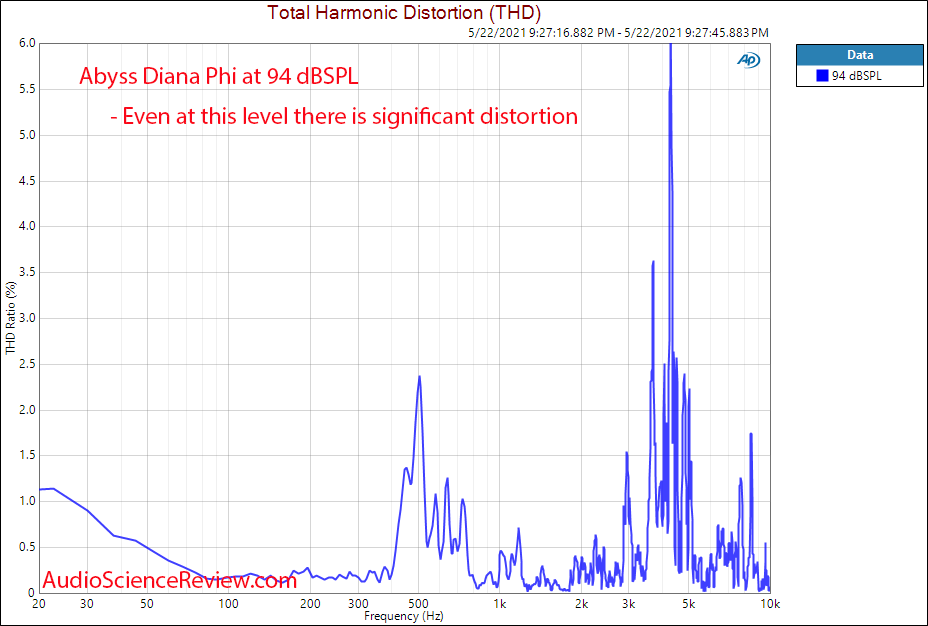 Distortion measurements are subject to accuracy errors but no matter how you look at this, there is too much of it from 300 Hz up. We see the absolute level levels are high as well: 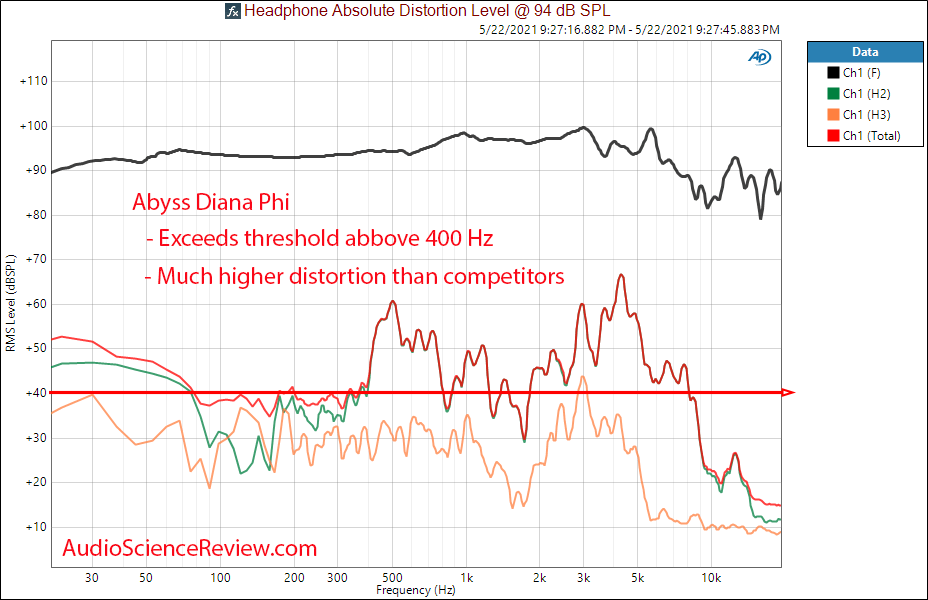 We could waive our hands and say distortion doesn't matter but good grief, you are paying so much for the headphone, why not get less distortion???

Group delay has ragged response in low frequencies which I don't like to see: 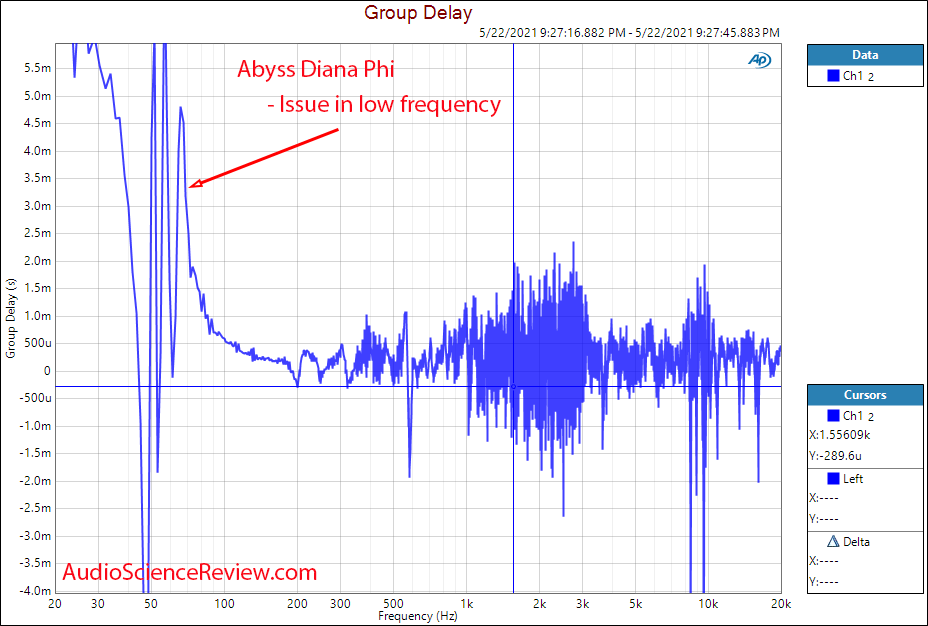 I was surprised that the impedance measurements did not match company's spec: 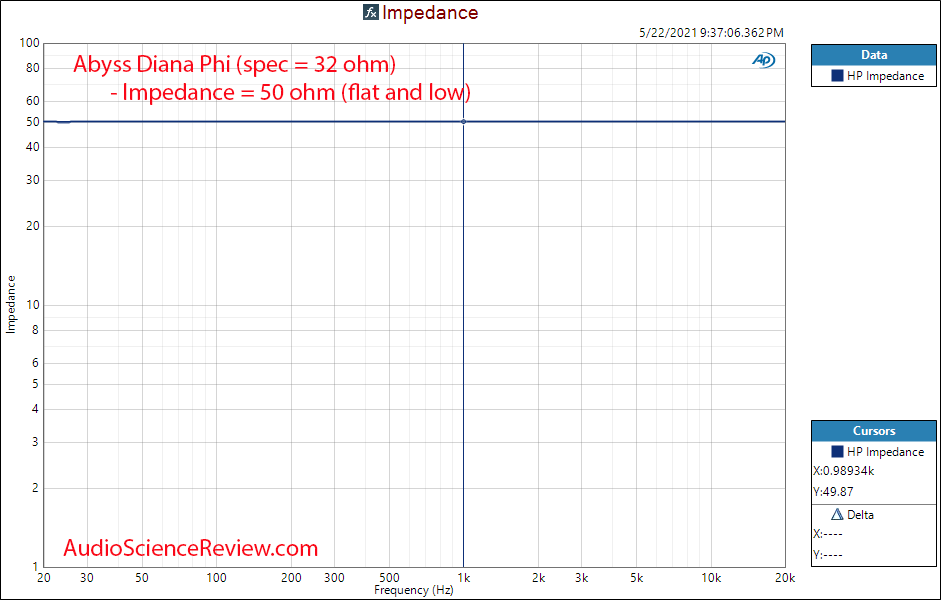 That is quite a bit higher than 32 ohm. So one has to imagine that they have modified the driver a fair bit than what they originally designed and specified. For this kind of price, I like to see exactness and consistency in a headphone.

The Diana Phi is on the less efficient side of the equation: 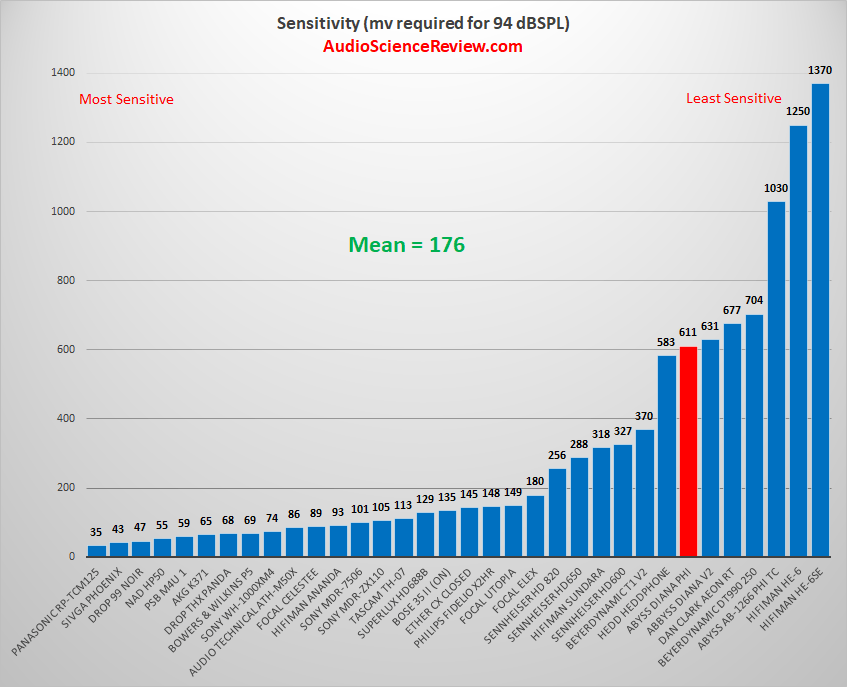 It is four times less efficient than the mean of 34 measurements in the database so far.

Abyss Diana Phi Listening Tests and Equalization
Out of the box, the one word that comes to mind about the sound of the Diana Phi is "ordinary." I didn't find it offensive but there was nothing about it to say this is a good headphone. There were no spatial effects to speak to hang your hat on either.

I made a rough attempt that equalization which improved things a lot: 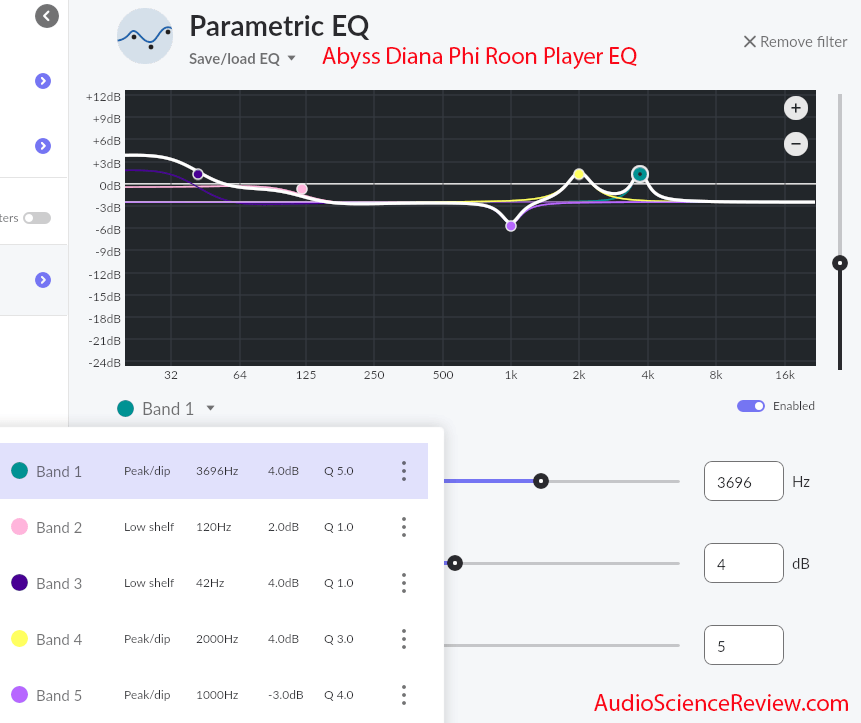 But sorry to say it didn't make enough of a difference. I have a long list of reference tracks I have collected for headphones which emphasize the full frequency response and spatial qualities and almost none sounded good with Diana Phi. It was as if "high-fi" was taken out of the lexicon of this headphone. I read another reviewer which said the same thing and that the only tracks that sounded good were "24 bit SACD rips" (I know, there is no such thing as 24 bit SACD).

Making sure I was not having a "bad headphone day," I did an AB test against the Sennheiser HD650 (because it is always on my desk). I tested both without EQ and the Sennheiser blew the Phi out of the water. Back was clarity, detail and pleasure in listening to music again. With equalization the HD650 pulled way ahead. So much so that I am still listening to the HD650 as I type this! Usually if a headphone sounds good I keep listening to it while writing the review. The fact that I had no interest in doing so with the Diana Phi should tell you how much I liked it, or should I say didn't like it.

Conclusion
The Abyss Diana Phi raises the price $1000 and delivers in my opinion even less than the Diana V2. It has more distortion for one thing, showing that the company simply has no focus on measuring and reducing artifacts added to your music. I mean these are not "tube" distortions which you can (mostly mistakenly) waive off. The drivers are becoming non-linear and not only impacting distortion measurements but also frequency response. Company seems to put a lot of precision in the physical construction of the unit but that attention is completely absent in the headphone design itself.

I have watched a lot of videos from the company and I think they can do a lot better if they focus on what matters. They need to take objective analysis much more seriously and work to eliminate colorations and distortion. For the price of four Diana Phi headphones they could buy a GRAS 45c for heaven's sake!

Needless to say, I can't recommend the Abyss Diana Phi. It doesn't measure or sound good to me with or without EQ.

The performance is abysmal.
R

Thanks for the warning

Specs say 91dB/mW which is 6dB lower in reality than advertised.
Even when efficiency is determined at 1kHz (quite likely) the efficiency number would still be 3 dB off in that case.

I would take the published specs with some grains of salt. (especially the THD numbers they quote it seems)

A lot of padbounce... probably due to the shape of the pads.
May well be less in reality compared to a hard flat surface of the GRAS.

Edited to reflect the V2.
Last edited: May 24, 2021
People have a tendency to overestimate their hearing capabilities.
Use your ears to listen to music not as an analyzer.

amirm said:
For the price of four Diana Phi headphones they could buy a GRAS 45c for heaven's sake!
Click to expand...

You know things get serious when our phlegmatic reviewer raises his voice..

PS: just remember to not discuss these measurements at Canjam if you subsequently intend to leave the building alive
Last edited: May 23, 2021

The angling and/or orientation of those pads troubles me but I cant find a stock photo that clearly shows how they should be angled but thick portion to the bottom (rather than the back) is unusual and if not as intended is going to give rise to a wealth of fit/ seal issues. Perhaps an Abyss fan can shed some light?
Too many DACs> Too many amps> Too many headphones

This is a scam.
OP

Ah, had drawn the distortion reference at 50 dB as I do with speakers. I corrected it to 40 dB which is what I use for headphones and now it looks even worse!
Amir
Founder, Audio Science Review
Founder, Madrona Digital
Contributing Editor, Widescreen Review Magazine
Click for My Technical Background
My YouTube Channel

daftcombo said:
This is a scam.
Click to expand...

It's certainly terrible value but I think scam is a step too far. They can point to legions of satisfied customers more than happy with their purchases. The fact the curtain has been pulled back shouldn't change that.
Too many DACs> Too many amps> Too many headphones

At this point I think abyss has been trolling the audiophile community.

And still managed to build a very attached online following. To the point of Stockholm syndrome.

One day someone will explain how they did it.

Thanks to Amir’s reviews, I’m beginning to think that the headphone business is saturated with a lot of snake oil. Price /= quality.

Yikes! Glad the truth is out. Thanks.

TheWalkman said:
Thanks to Amir’s reviews, I’m beginning to think that the headphone business is saturated with a lot of snake oil. Price /= quality.
Click to expand...

Only the headphone business? Take a look arround: snake oil is everywhere and thankfully it is revealed step by step now!!!
A

can we perhaps see tests for intermodular distortion in both speakers and headphone reviews?

I think that IMD would be more dominant than Harmonic distortion in real life applications.

Come to think of it. Should the company ever go under, they can start a new one called Distor, Horrend, Pathet, Absur, Ripo, or Sca.

can we perhaps see tests for intermodular distortion in both speakers and headphone reviews?

I think that IMD would be more dominant than Harmonic distortion in real life applications.
Click to expand...

I have run a lot of IMD tests and none tell any kind of useful story. Distortion mechanisms on transducers are quite complex to tease out this way. Simplest then wins in the form of THD where we can tell the problem area.
Amir
Founder, Audio Science Review
Founder, Madrona Digital
Contributing Editor, Widescreen Review Magazine
Click for My Technical Background
My YouTube Channel

I dont like abyss at all, with their bold claim of "best headphone in the world" without any objective data backing it up. And with objective data it's not really at abyss advantage.
You must log in or register to reply here.

Today at 9:56 AM
don'ttrustauthority
D