xnor said:
The argument is wrong anyway since sampling rate does not determine temporal resolution but bandwidth.
As I said, this comes from a complete ignorance of digital audio and signal processing fundamentals. These people think that digital audio is about connecting dots in straight lines, that samples have a temporal extent, that there are gaps between samples where information is lost, that there is an error if the sampling process doesn't match the signal peaks, and so on..
Click to expand...

which remembers Shannon's theorem which is the basis fsampling=fmax*2.

Actually you need more than twice the maximum frequency you want to encode. So fsampling > fmax*2
Do diamonds shine on the dark side of the moon?
F

voodooless said:
Actually you need more than twice the maximum frequency you want to encode. So fsampling > fmax*2
Click to expand...

i quote the Shannon theorem. nothing else.
your quote is pedantic.

to perfect your education, fsample=fmax*2 is the frequency of nyquist 44.1 Shannon wrote: to perfectly reconstruct a digital signal, it must be sampled at twice the maximum frequency content, i.e. 22.05 kHz.
Last edited: Oct 17, 2022

Frgirard said:
i quote the Shannon theorem. nothing else.
your quote is pedantic.
Click to expand...

Your the one who keeps repeating how important math and science is… if you thinking is, details matter! Your theorem is just wrong, as can clearly be seen on Wikipedia: 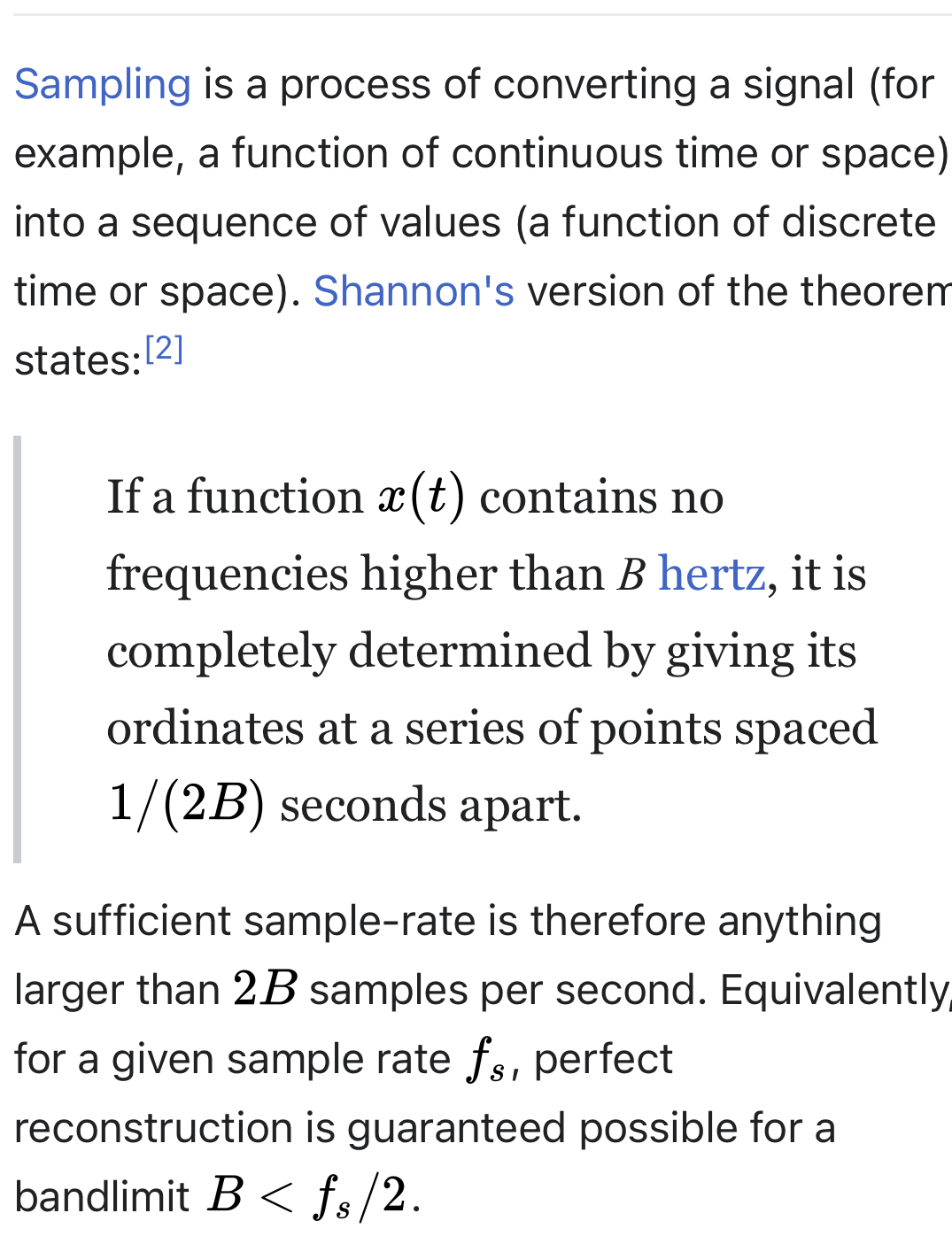 Specifically, you cannot for example sample a 22.05 kHz sine with 44.1 kHz sample rate for all phase configurations. Some will result in total silence. You can with 44.2 kHz though. Obviously there are other practical implications due to the need for reconstruction filters, but the theorem ignores these.
Do diamonds shine on the dark side of the moon?
J

Really? Now that is a problem? It never is with all the other nonsense he spouts.

He thinks bit depth is only about dynamic range. He also thinks CD masters are recorded at 44.1 kHz?

Once again a load of nonsense, no proof, no controlled test, not even an explanation of the core “issue”.
Click to expand...

Looks like he added some equipment to the stack behind him and he may have also dusted the knobs, so that a plus...
OP

It is however not exactly the right thing. It’s about timing differences between two ears. You can’t just extrapolate this to other use cases.
Click to expand...

I couldn't read the whole Paper as I'm not a member of the ASA, but I found the abstract interesting (and as you say, not altogether applicable). I continue to be interested in research findings as to human hearing sensitivities and timing resolution outside the conventional thought of 20 kHz limits (especially, in the time domain, regions of less than 50 micro sec., and due also to vagaries in the basilar membrane, meatus, tympanum, etc.).
Perfect is infinitely costly. State-of-the-art gear ages rapidly; tomorrow, some new thing will be SOTA and your brag rights will dissolve into apologies. | No matter how much money you spend, hifi cannot reproduce your first music-accompanied pot high. | Before I am interested in a reviewer's upchuck on speaker virtue, I want to know his taste in music. | Lottery tickets are probably a better audiophile investment than expensive interconnect cables. | Before you jump onto the audiophile 'train,' be sure you know where you want to go, and when you should get off. That, or it's just an obsession with train rides. | You can have good, loud, and cheap. Pick any two.
As an engineering undergrad, I took two semesters of Electrical Measurements. A direct quote from the course professor: "If you cannot measure it, you cannot describe it." ​

Regarding pedantry, an interesting (or not) thing to know about sampling theory is that it supports both positive and negative frequencies through complex sinusoids.

In the complex plane (real from left to right, imaginary from bottom to top): 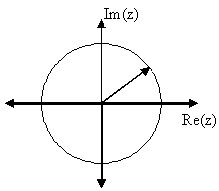 a positive-frequency complex sinusoid would rotate CCW in a circle, a negative one CW. Each positive and negative frequency from 0 up to Fs/2 Hz gets its own distinct point on the circle ... except for +/- Fs/2.
Both +Fs/2 and -Fs/2 get the same point (at 180° or z = -1), which can be viewed as aliasing. So you have to pick and agree on either using + or -Fs/2, but then you're fine.


Real signals (like music) can be defined the same way except that they are a sum of two points mirrored over the real axis such that the imaginary parts cancel, leaving only the real part. So real signals rotate both in part CCW and CW and sum to points along the real number line.
This destroys the possibility to distinguish between positive and negative frequencies, or calculate magnitude or angle.

That means that reconstruction of a real sinusoid with a frequency of Fs/2 becomes limited to the case with 0° phase shift:
In the worst case (90° out of phase), the real part becomes zero so the sampling process would produce only zeroes and the reconstruction would result in silence.
In the best case (0° in phase), the real part matches the input signal.
In any intermediate case, the real part will be lower than the input's amplitude, cos(phase) to be precise, and the phase will be off by the input's phase shift.

Thanks to those who took the bullet for the team and watched Hans and reported.....saved me from having to watch it
You must log in or register to reply here.

B
A Yarn on Digital Risks With Audio

A no-taking-sides, no judgment classification of the 4 types of Audiophile. "The audiophile bestiary".
12 13 14

God of SINAD vs. reality we get from most available music files
12 13 14