This is a review and detailed measurements of the Audioengine D3 portable DAC and headphone amplifier. I bought this refurbished from the company direct a year ago. I think I paid USD $99 for it but now see it new for the same price from Amazon including shipping. A member wrote to me asking if my version was 2 or the original. His has v2 after it, mine does not. I contacted the company and just heard back that the new versions have lower output impedance than what I measured. They do not note any other changes.

The D3 is one of the more substantial thumb drive DACs with chunky and solid metal enclosure: 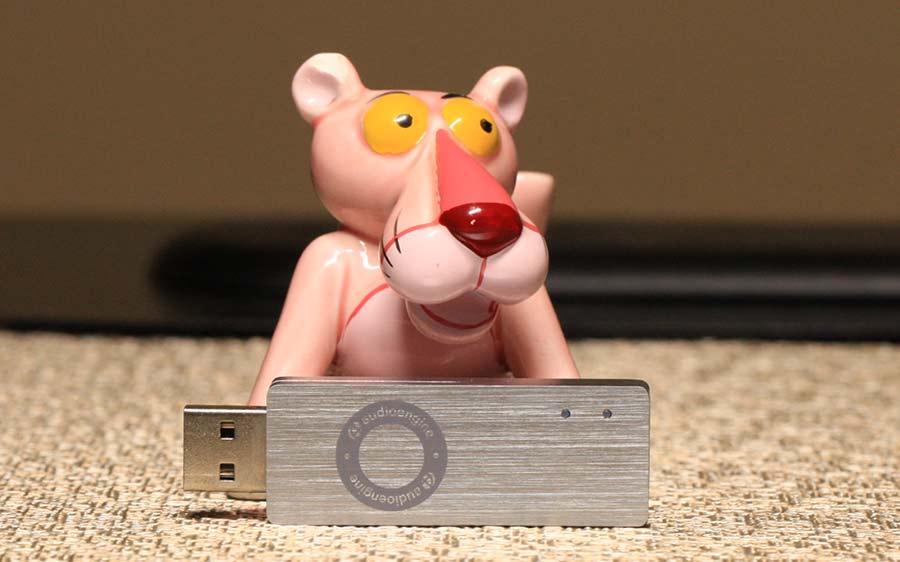 On the back side there is full set of regulatory certifications including CE and FCC which I was pleased to see. And yes, the CE logo conforms with the EU graphics standard. Audioengine is big enough company that likely did go through proper testing. The metal enclosure definitely helps with any radiated emissions standards.

As soon as you plug the D3 into the USB port, it starts to warm up and stays warm during operation. I will post power measurements later in the review.

The D3 operates without drivers in Windows as it should. It sets whatever flag there is to connect Windows hardware volume to it which by default was 33 out of 100. There are no volume controls on the unit itself.

For my testing, I need ASIO drivers so I resorted to ASIO4ALL wrapper after searching and not finding any drivers for the D3. This mostly worked but every 5 seconds or so, it would glitch. No amount of messing with ASIO buffers helped this. So if you are going to use the D3 with audio workstation software, you may likely have problems. I had no issues using the D3 with my Roon Audio player using WASAPI interface.

Audio Measurements
As usual, I like to start with DAC-style testing, setting the unit up to output 2 volt output. The D3 severely clipped at 0 dBFS which resulted in such output. I had to dial down the input to it by 2 dBFS to get non-clipping output: 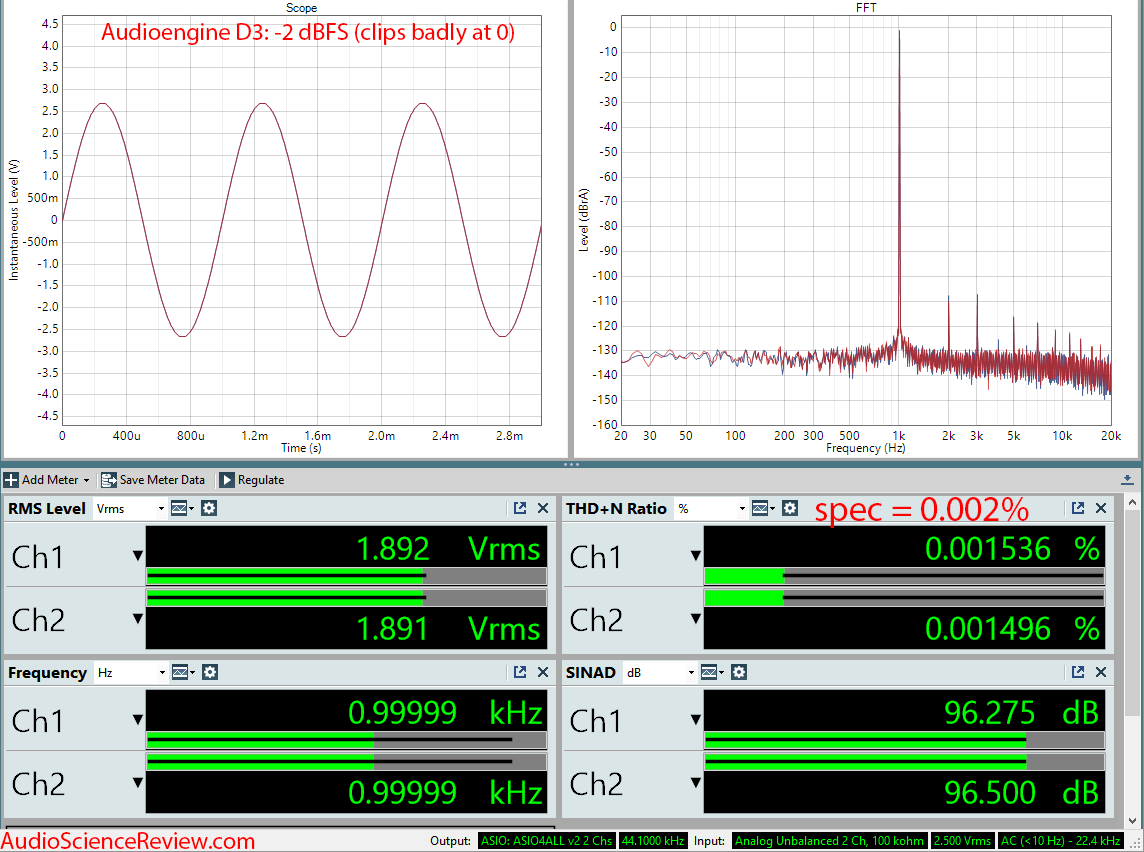 Distortion products are around -108 dB. With addition of noise, that gets our SINAD (signal over noise and distortion) to 97 dB or so which is pretty decent for this class device. It beats it specification at 0.002% which is also nice. Here is how the D3 ranks among all DACs tested regardless of type:

The more critical measurement for a portable DAC+Amp is how noisy it is at very low output levels. The measurement on the right shows that to be 75 dB. Here how that rates (I have just started to measure this so not that much comparison data): 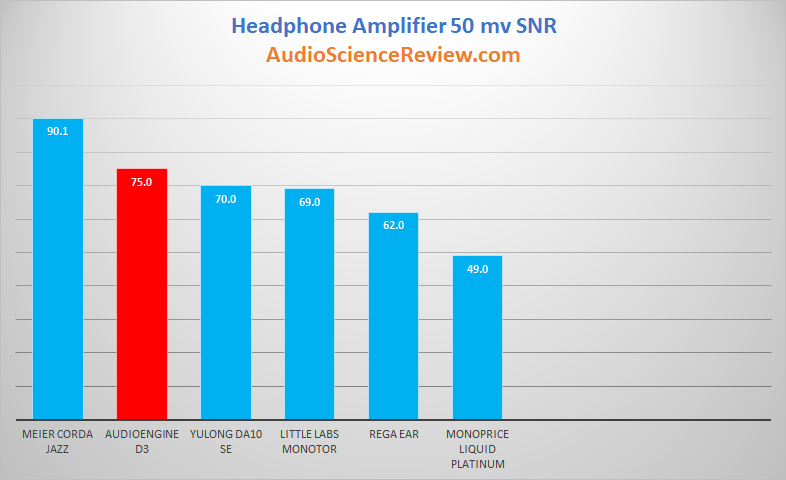 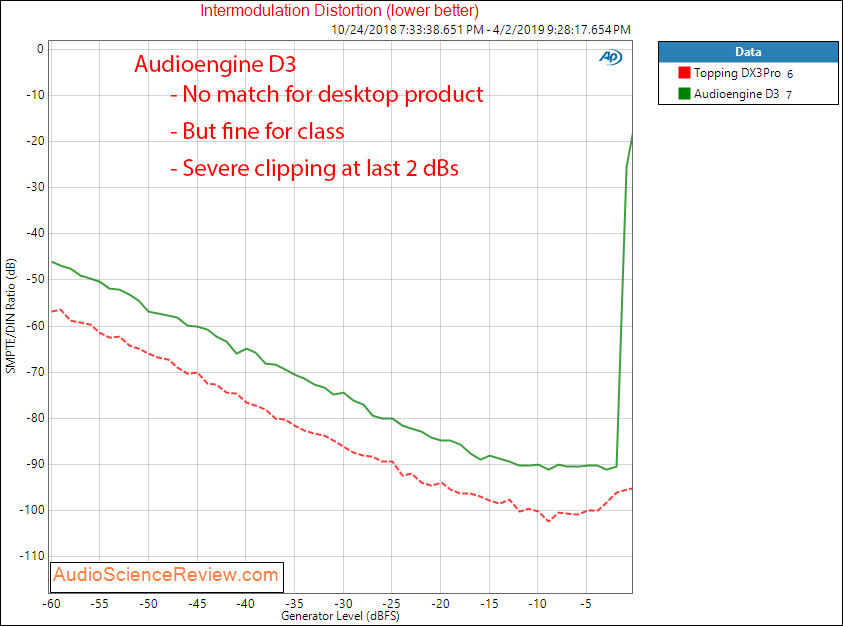 Most important measurement for any headphone amplifier is the amount of power relative to distortion. Let's look at that for 300 ohm load: 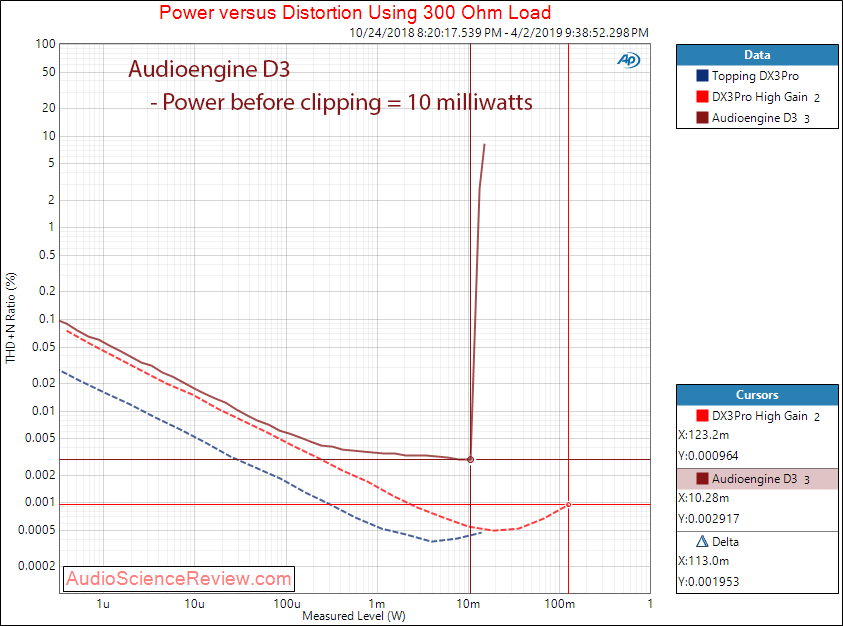 We essentially have the same amount of power than the desktop Topping DX3 Pro has in low gain.

Here are the results for the other extreme at 33 ohm, checking the performance for high current delivery: 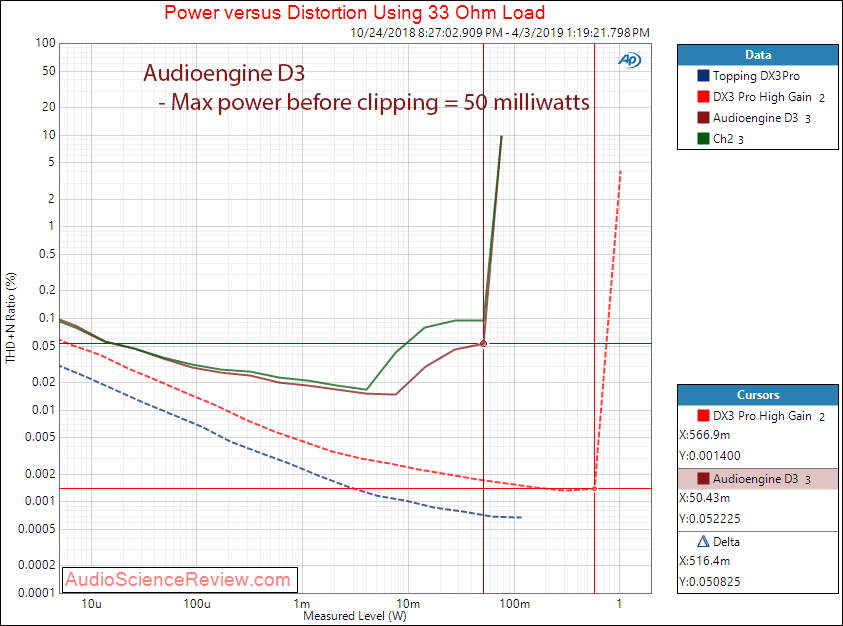 Would have wanted to see a bit more power but we have what we have. The gap in distortion and noise is fairly large now relative to desktop products.

Here is how the Audioengine D3 ranks against some of its peers in power department: 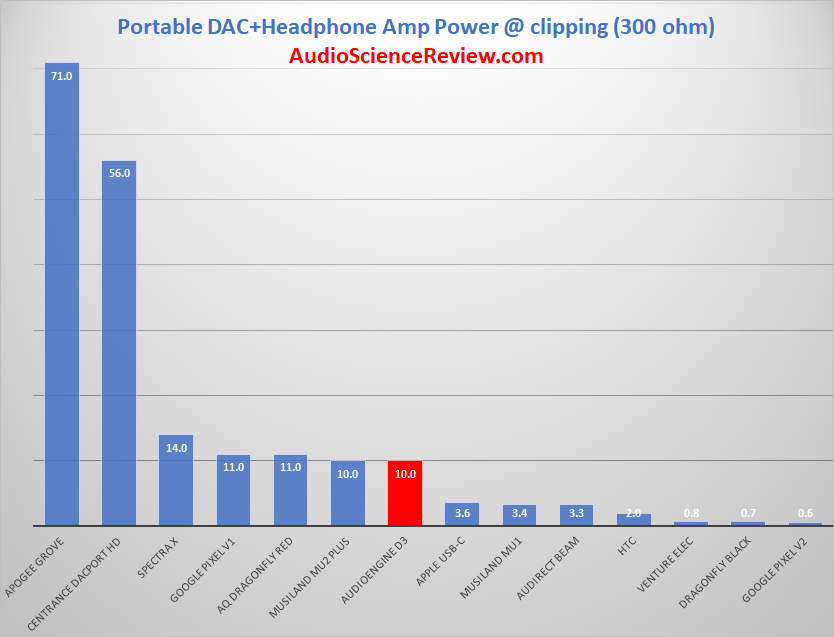 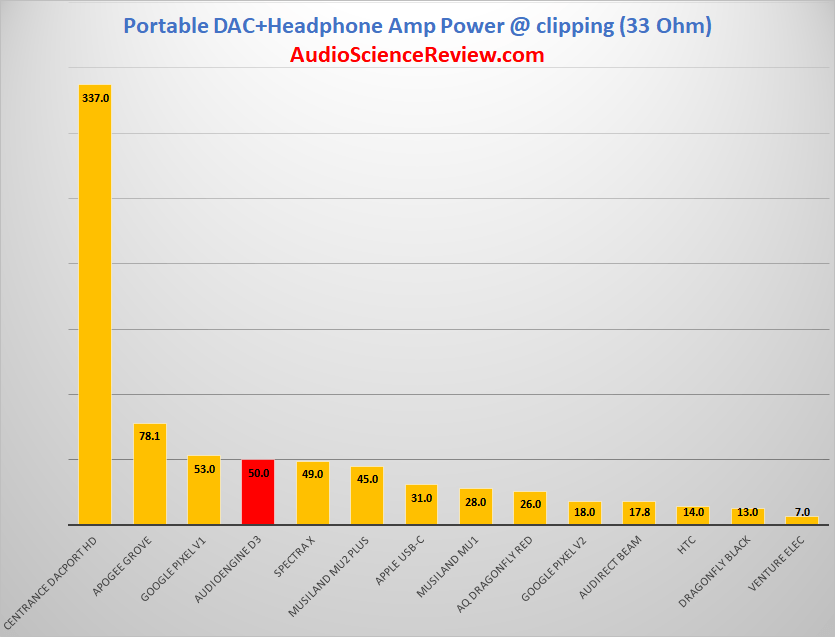 As I mentioned, the unit runs warm and that shows up in idle power usage: 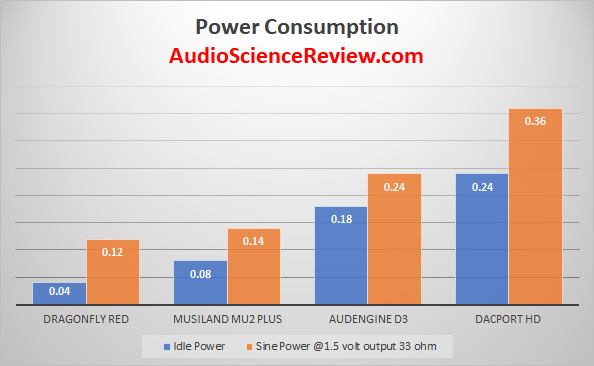 Output impedance in my version was 11.5 ohm:

As explained in the review, this has now been revised to 2 ohm in specification. This change should also up the amount of power available at 33 ohm.

I could not run my jitter test due to ASIO4ALL issue.

Listening Tests
My listening test results usually pretty much track the measurements when it comes to headphone amplifiers. This was kind of an exception. While I had no physical sensation of bass around my ears, the sound with the Sennheiser HD-650 headphones had very solid bass and dynamic range. I could only detect some distortion at 100% volume. Even then what was there was slight.

Switching to Hifiman HE-400i improved the situation even more. I was comfortable listening at -7 to -11 dB in Roon software volume control. The resolution, overall fidelity, etc. was all there.

I was surprised enough that I went back and remeasured the D3 again in both 300 and 33 ohm. In both cases the results were the same other than noise went down some in the former case (which may have been due to the unit being cold).

I suspect the small power supply capacitors in these dongle can handle momentary peaks better than their continuous performance indicates in testing. Or, I have lost my calibration in my hearing.

Conclusions
The Audioengine D3 seems very well built physically. While not a match for desktop products in power and general performance, it is not suffering from any design issues. My subjective results showed that this is a very capable device for everyday portable use with my two rather difficult to drive headphones. The results therefore should translate to many other headphones.

At current price of $99 including shipping, the value is also there in my view.

I am happy to recommend the Audioengine D3.

Every day I look at the list of richest people in the Forbes magazine but don't see my name. Please help me get there by donating using:
Patreon: https://www.patreon.com/audiosciencereview), or
upgrading your membership here though Paypal (https://audiosciencereview.com/foru...eview-and-measurements.2164/page-3#post-59054).
Amir
Founder, Audio Science Review
Founder, Madrona Digital
Contributing Editor, Widescreen Review Magazine
Click for My Technical Background
Master List of Audio Reviews

Nice review! You skipped Linearity though.
Or are you unable to do it without Asio4All?

$99 is still kinda steep compared to some other devices. 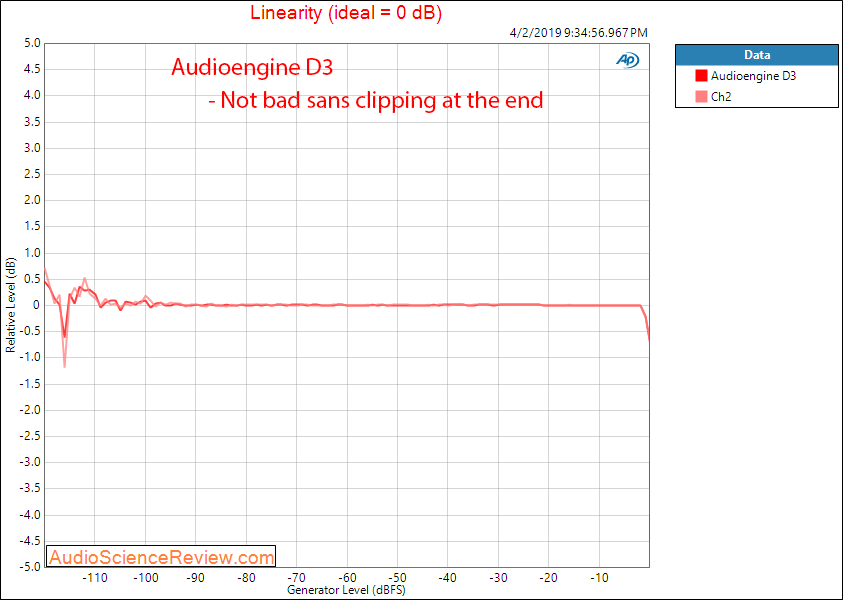 Got this for my ex for $65 on Massdrop if I remember correctly. Didn't expect it to measure this well.

Looks like it is on Massdrop for that price right now.

Right now it's going for $45 refurbished direct from AudioEngine, when it's in stock: https://audioengineusa.com/shop/factory-refurbished/d3-24-bit-dacheadphone-amp-2/

As usual, I like to start with DAC-style testing, setting the unit up to output 2 volt output. The D3 severely clipped at 0 dBFS which resulted in such output. I had to dial down the input to it by 2 dBFS to get non-clipping output:

Would the result differ if still using 0dBFS file but reduce the master volume instead? Thanks
W

I have this for my travels and it works well - certainly runs warm as you have noted. I searched to see if you've ever done the full measurements of the Audioengine D1 "desktop" dac/amp and I couldn't find it. Any chance you might take a look at that one as well?

Interestingly, their D1 had a 10 ohm output-impedance, but it's now 2 ohms, or is it?

10 ohms is not an issue for the majority of headphones out there, but the above has made me question the integrity of Audioengine. Can anyone confirm the D1's or D3's current output-impedance specification?
S

As @TimW I got this from Massdrop for 65 USD. As @spleaner stated there is even cheaper refurb version on manufacter site but I think that this is viable only for US based customers. Measurements are pleasant suprise. My observations with Sennheiser HD-6xx are similar to amirms. With like 80-85/100 they´re loud enough and definetly nice sounding but there is not much headroom if you want to be sure you´re in the "no clipping safe zone".

@amirm In an older archimagos review he stated that if you are under 90/100 volume in windows you are safe from clipping. Can you confirm this value? I want to thank you again for this test.

jasonhanjk said:
Would the result differ if still using 0dBFS file but reduce the master volume instead? Thanks
Click to expand...
No, the results were the same.
Amir
Founder, Audio Science Review
Founder, Madrona Digital
Contributing Editor, Widescreen Review Magazine
Click for My Technical Background
Master List of Audio Reviews

Sw!tch said:
@amirm In an older archimagos review he stated that if you are under 90/100 volume in windows you are safe from clipping. Can you confirm this value? I want to thank you again for this test.
Click to expand...
My pleasure. I will test tomorrow.
Amir
Founder, Audio Science Review
Founder, Madrona Digital
Contributing Editor, Widescreen Review Magazine
Click for My Technical Background
Master List of Audio Reviews

I wonder why they make it clip on purpose, the DAC specs are very good.

Nice, another dongle tested. This means the Cyrus SoundKey has moved up a slot in the dongle queue

I have used an Audioengine D3 DAC in my main system for some time. It is powered by an Intel NUC PC and now drives Dynaudio LYD48 active monitors. As far as I am concerned, the D3 is good enough to do the job.

Amir, when you review a small form factor USB powered DAC, please comment on its suitability for use with amp and speakers as well as with headphones.
P

I have one of these, picked it up at a very good price. From a subjective standpoint, the sound is not bad at all IMHO with easy to drive headphones. I don't use it much anymore because it does have some quirks that make it a bit user-unfriendly. If you are switching sound sources from things like YouTube, a streaming app, Foobar, etc. frequently you may find it to be quite a PITA to use. Also, I found it would reset itself sometimes for no reason, and plugging it back in would sometimes give me a shock of very high volume. I ended up sending my original unit in and AE sent me a new one. I've since moved on to an SMSL IQ for desktop and portable use. It's more user friendly IMHO/IME and plays more formats and higher bitrates natively than the D3 does.
B

Thx for review, Amir! Am I reading FFT chart wrong, or do I see 108dB? I'm trying to learn something new here (since I see these graphs on some other websites). Can somebody explain how do we get to 96dB SINAD number?
M

I bought one after much research and largely based on Archimago's review. Glad to see it reviewed here too with positive results!

One little design flaw with this unit - because it has no physical volume control and it defaults to 33% when connected, when you connect it to an Android device that is your max volume - because by default Android only adjusts the software volume.
Can apparently be resolved by using an app called USB Audio Player Pro - but it's a paid app so I haven't tried it, as that isn't a normal use case for me anyway.
But for mobile devices you're probably best to buy a unit with a battery anyway like the Topping NX4 or the SMSL IQ other posters mentioned.

D3 is better suited for PCs and laptops where you can leave it plugged in and not worry about yet another device with a battery that will require charging and wear down over time.
You must log in or register to reply here.
Share: Facebook Google+ Reddit Pinterest Tumblr WhatsApp Email Link