For last couple of month I've changed (Improve Dr and Declipped) all of my albums because of the low Dr Range of new mastering trend. At first I was a little bit afraid of the idea but after finishing whole process I must admit it was worth it. Suddenly music achieve higher level of immersion, depth, wider sound stage, precise instrument sound and lot more.

That's a link for Dr album list, I use all the time:

What's your experience on that matter?

The way I see it tools like de-clipped create higher DR ratings and sometimes even corrects some clipping almost correctly.
Once some album is compressed you can't un-compress it as often during mixing each instrument/voice gets their own 'compression' and other DSP/EQ which cannot be undone afterwards.

While I agree that some improvement can be had with some clipped music to me this never results in 'achieve higher level of immersion, depth, wider sound stage, precise instrument sound and lot more', merely some less clipping is heard.
What does help with some complete albums is to change some EQ. Some albums have too much, or too little bass, mids or treble in all songs.
Seems like a mastering or mixing error thing in the studio. This kind of thing lets me enjoy the recordings more.

That's my experience with it at least.
YMMV
People have a tendency to overestimate their hearing capabilities.
Use your ears to listen to music not as an analyzer.
OP

What i've noticed is that whole sound stage is built on Sound changes between channels. I've send two pictures of the same song i (improved?) yesterday. It's Inertiatic ESP by The Mars Volta band. The compressed sound of the original makes the instruments sounds bigger so the sound stage gets Crowdy and instruments covers each other. beside there is huge nonsense with the tops sound being cut off before finishing. I know it's simple basics, but that's the whole point. If you want I can send a sample so you can judge it yourself

I've tried declipping in the past. Best results I had were with the https://www.stereotool.com/ declipper. I don't bother anymore, it's not worth it IMHO.

However, when it comes to remastering albums you own, I've had good results with https://www.har-bal.com/ and use it from time to time to fix albums that need it.
Ohne Musik wäre das Leben ein Irrtum.
R

Unfortunately a trend for new drives is increased dynamic compression, even 24bit remasters have decreased dynamic range.
These tools soften the compression but ideally the correction of all disk mastering.
I suggest doing a test with recent album Baroness, Gold & Gray's, where compression has made the album hard to hear.
OP

If you only could see Blue Ray (WTF?) Keep The Faith remastered Bon Jovi, how this one was compressed!!!! Honestly you really can't say which record these days are or are not Audiophile Reference. Modern Sad Times.

I've used Izotope's declipper tool on a number of albums. I think it's a wild overstatement to say such tools always work and always - or even most of the time - produce audible improvements. But I do agree they work sometimes.

In my experience it produces one of three outcomes:
I've also found a high degree of correlation between the above audible results and how you have to set the de-clipper and what the de-clipped waveform looks like.

With the 1st, successful scenario, you can set the de-clipping threshold fairly conservatively and the result is a much more natural looking waveform with more randomized peaks. In this case a good deal of the compression was done at the final mastering stage, when the mix down was subjected to overdone peak limiting. The de-clipper has restored those peaks and the core mix is not overly compressed, so the result is good.

With the 2nd, "doesn't really sound better than before" scenario, the resulting waveform looks like the buzzcut original, but with just a few random "hairs" (aka restored peaks) sticking out. In this case a lot of the compression was baked into the mix (or the final mastering used heavy conventional compression and not just peak limiting), and so the de-clipper can't substantively decompress the sound.

The 3rd, "sounds different but actually worse" scenario, it's a version of the 2nd scenario: You can achieve more peak restoration and a more natural waveform by "digging down deeper" into the waveform, aka setting the de-clipping threshold more aggressively so that it will restore peaks for lower-level parts of the signal. The problem there is that when you set the de-clipper more aggressively, you start to get a real frequency imbalance in terms of what is impacted by the de-clipper and what is not - because bass frequencies have so much more energy and contribute disproportionately to the overall digital volume of the waveform, overdone de-clipping will rob the music of bass slam and in some cases also some warmth. The result can be thin-sounding an unpleasant.

Bottom line IMHO is that some overly compressed masterings have a sweet spot where you can de-clip enough of the peaks to make a difference without negatively impacting the core frequency balance, while others do not have that sweet spot - there's too much compression baked into the mix and compression is too fundamental to the sound of the bass and percussion.
OP

I defiantly agree that the whole process hasn't got 100% positive impact, but the whole point at least for me it's not about dr number, it's just an effect of process than goal. It's important to let in some "air" in to the channel and have as much free space between the channels as possible, and finished as much cut pics as possible without damaging the sound. And of course there is always a compromise you have to agree..., but I don't have much choice between bitching about how the sound of a record is not acceptable or try to fix it for my self, as i feel and like it. It works for me doesn't have to for others.
OP

And there are some records that are absolutely impossible to recover.: last 3 records Bon Jovi made. Awful.
H

I don't expect high quality mastering from pop, rock and electronic. There is fundamentally different standard to evaluate the sound quality. Sometimes there are musics mixed by different engineers in one album.
example

I'd agree with what @tmtomh already said for the samples I've heard.

I do some sound design for community theatre where one enhances the backing tracks and tunes while matching level from track to track.

There is quite a bit that can be changed. Unfortunately once the peaks are limited, or lopped off, they cannot be revived.

Do the following experiment.

Take a well made recording. Use software to amplify that file so clipping occurs so that it sounds poor. Run that file through a declipper program of your choice with various settings. Compare with the original.
People have a tendency to overestimate their hearing capabilities.
Use your ears to listen to music not as an analyzer.
L

I experimented with Audacity software in "fixing" clipped/low DR recordings, and I'm having some results with following effects applied in sequence. 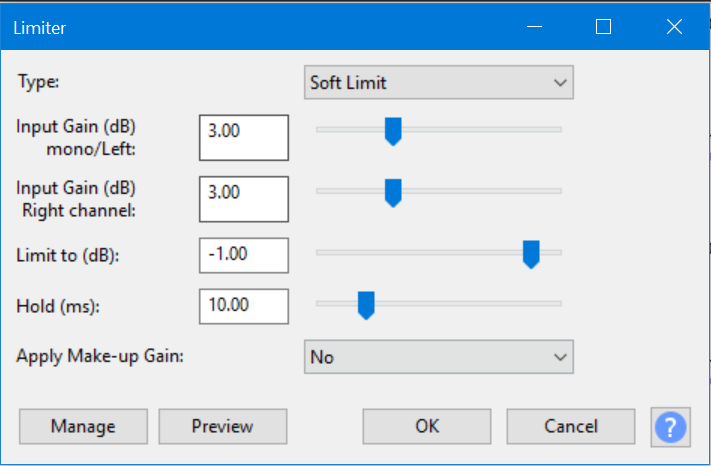 Here are some before/after results.

I've tried declipper built in Adobe Audition 6.0, but the best results and sound improve I've got from Thimeo Perfect Declipper. But like I said Above it works for me... I've changed all my Pop, Rock and Soul music albums. It's not only about clipped sound but there is no silence in the recordings. So the whole process makes it more acceptable to listen. Instead of loud noise I get bigger sound stage and more balanced instrument sound. Overall bands like System Of Down or Slipknot, Korn, Adele... get a new angle of listening experience. Of course instead of doing it myself i'd expect professionals to do their job properly..., but it's good to know that there are some other ways...
A

Is it the case that the professionals are not doing their job properly or that their job is to do it as it works for the generation that listens via earpods in noisy places while multi-tasking between music and social media consumption?
OP

Let me put it this way. You are sound engineer, you put a lot of time and effort to set all the mics around instruments, record it, balance the sound and everything you have to do. And after all this you literally shit it all over and make the rocord so loud and compressed that it erase all your previous work. Society didn't need loud recordings in 80s or early 90s. From my point of view if you want louder sound just press a proper button (Vol Up). Society will eat what you give them. It just all of the music industry went way too far, and I don't see any turning point, I'm just pissed, so Fuck'em all, I'm going my way
B

audimus said:
Is it the case that the professionals are not doing their job properly or that their job is to do it as it works for the generation that listens via earpods in noisy places while multi-tasking between music and social media consumption?
Click to expand...
Well said. Hard limiting is just another tool used to achieve the desired result. The golden rule applies-those with the gold rule. This all started because the playback method, fm radio, youtube, apple etc. did not establish a max level. So the louder the better as when your tune played it was louder than the previous tune it "sounded" better. Now that most playback methods have indeed established a max level hard limiting is a thing of the past with a few exceptions.
You must log in or register to reply here.
Share: Facebook Google+ Reddit Pinterest Tumblr WhatsApp Email Link
Top Bottom