This is a review and detailed measurements of my Mark Levinson No. 360S DAC. I purchased it sometime around 1999 when the new high resolution formats had come out (DVD-A and SACD). It has been a solid foundation of countless audio evaluations I have performed near two decades now. The 360S was the hand tuned version of 360. I think that made it cost $2000 more? I forget how much it cost but probably around $7,000. In today's dollars, that would be well over $10,000. So not cheap. Used ones seem to go for as much as US $3,000.

This thing weighs a ton for a DAC and that is the reason I hate you all for asking me to rip it out of my cabinet to test it! 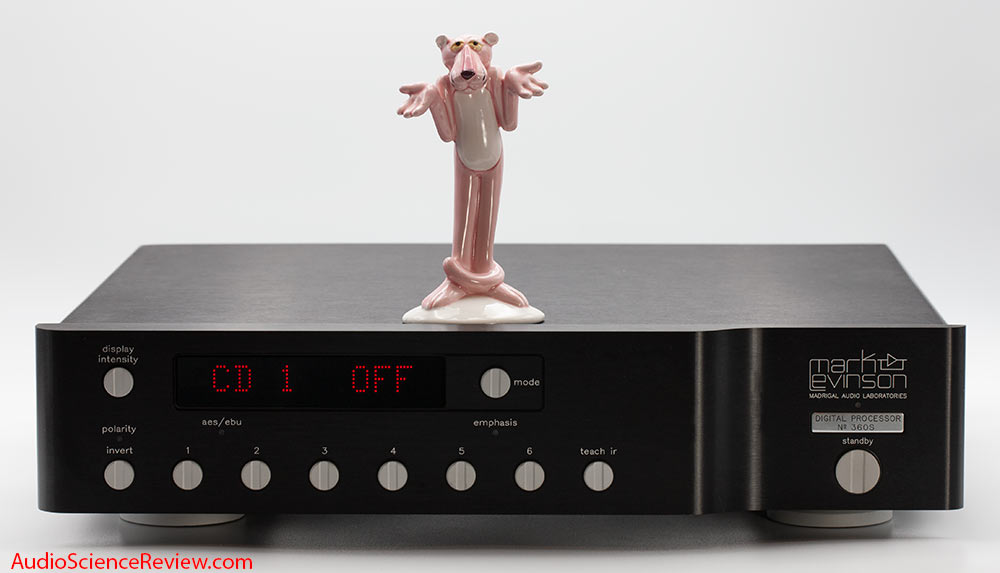 Lots of connectivity was provided but alas, no USB, HDMI, etc.:

The brochure talked at length about modular architecture that would allow addition of new input types. Well, no. Nothing of the kind ever arrived. As such, to use it in this day and age, I have had USB to S/PDIF or AES bridge.

HDCD was supported for decoding of those CDs. Balanced XLRs are provided of course. And you got cool indicator such as "emphasis" which hardly any CDs ever used (pre-equalization).

Something is missing from the back panel. Do you spot it....?

No power input! The IEC plug is underneath in the center of the device so that it can have a short connection to the transformer! Clever way to deal with mains leakage that way but makes it a pain to connect and disconnect. Did I say I hate you guys for forcing me to do this a few times for this test? I thought I did!

Some kind of ugly remote came with it which I lost long time ago.

A few years ago one channel went bad. It was a capacitor that had gone past its useful life. Changed that and it has been working solidly.

Oh, back to limitations, it only supports maximum sample rate of 96 kHz.

The interest to have this measured comes from it using Bur-Brown PCM1704 (dual per channel) R2R DAC chips.

The guts of this machine is quite serious: 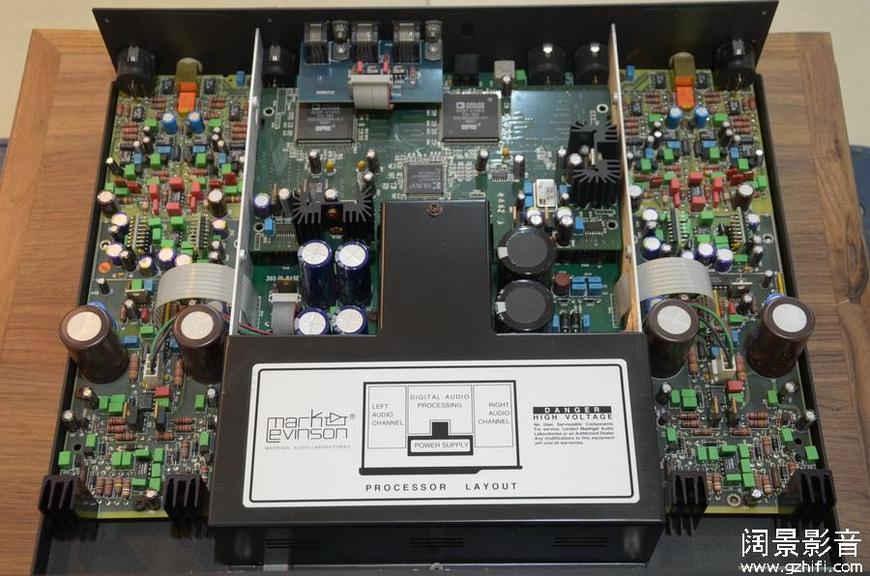 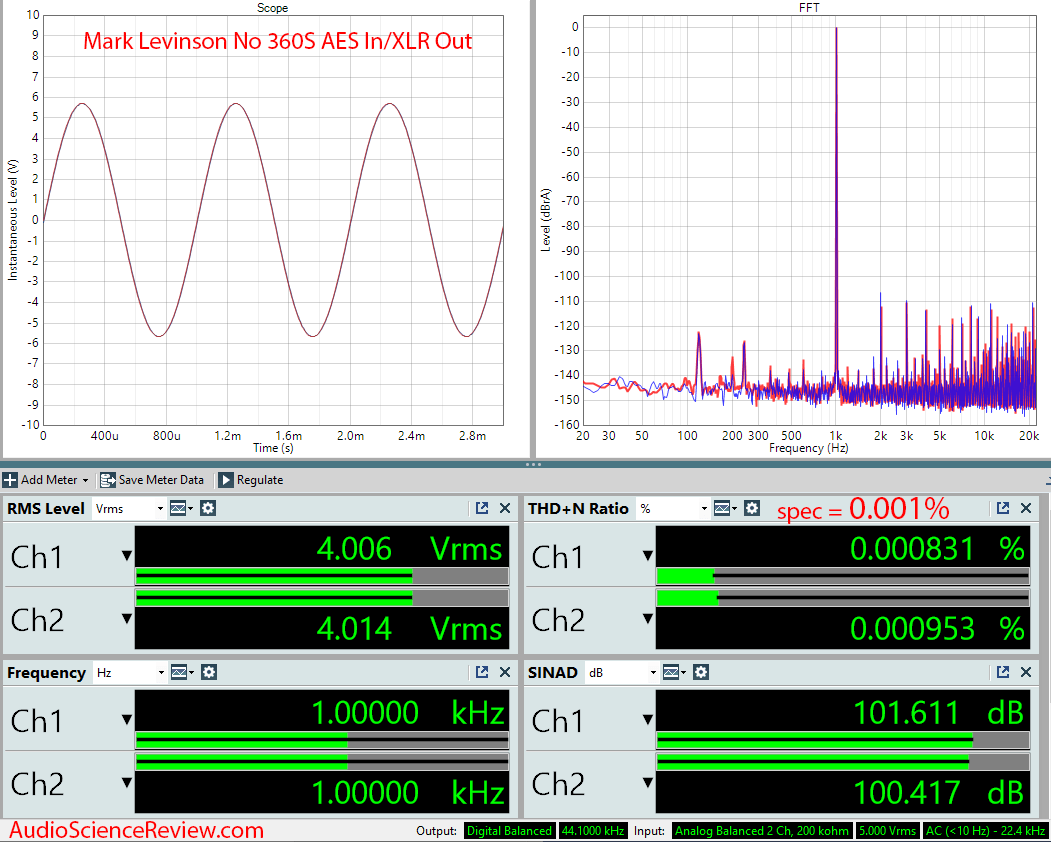 While the tested unit bests the specifications from manufacture for THD+N, overall score is nothing too impressive today:

Right above is a little dongle with the same spec.

Dynamic range meets spec and again, is nothing too impressive: 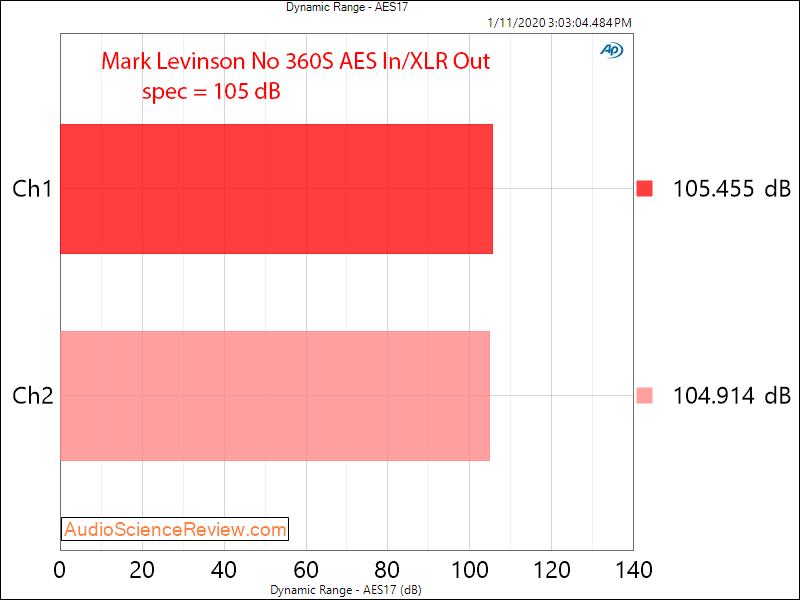 Both though beat the CD spec which is something to hang my hat on.

I could not run my usual multi-tone test because it uses 192 kHz sampling rate. So here is the 7 band one: 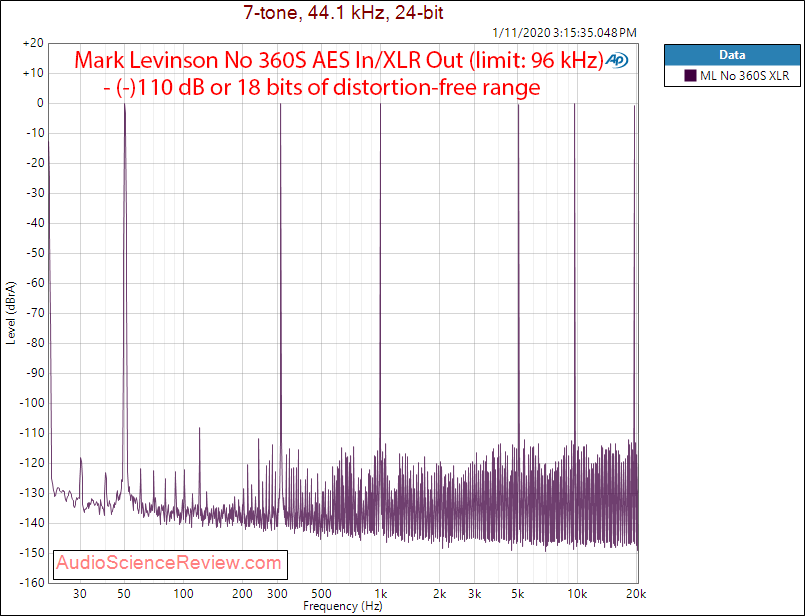 Jitter performance started off quite good but after a few passes as I average the signal jitter spikes popped up: 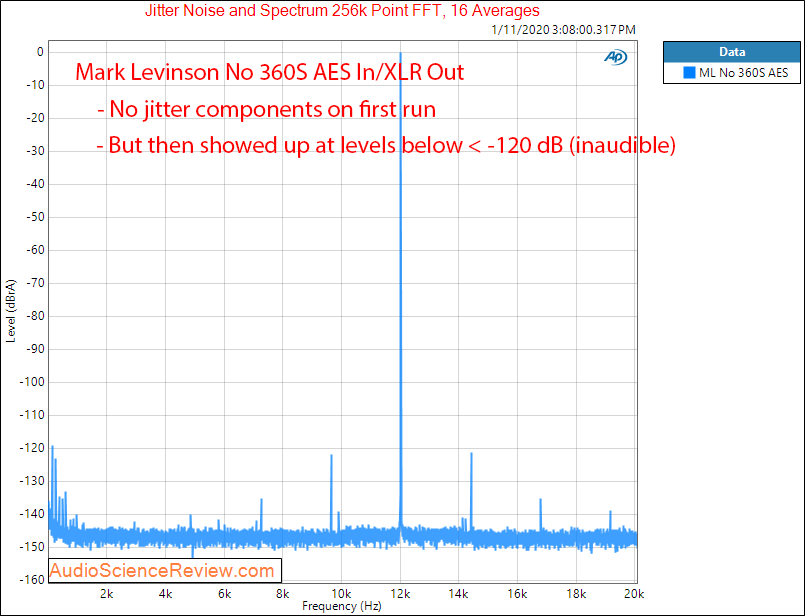 The 360S has smart front-end logic which determines to sampling rate of the incoming signal and once there, it no longer chases it and uses a fixed internal clock with much lower jitter. The issue with that is that it can run out of data or get too much if its clock stays out of sync for too long with the source. That must be what is happening here as it attempts to resync its clock. Fortunately even with its internal smarts failing, it still produces jitter that is below 120 dB so totally inaudible. 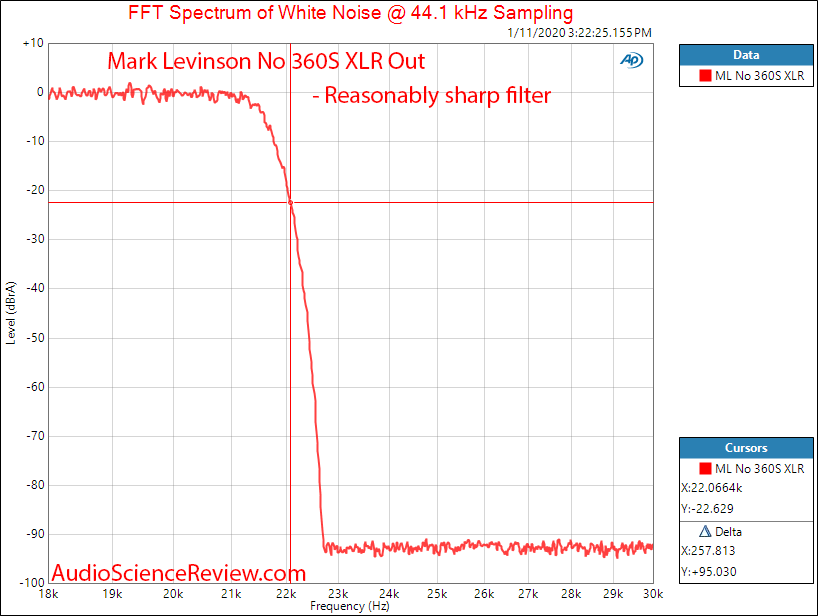 The higher noise level (relative to newer DACs) causes its IMD versus level to not look particularly good: 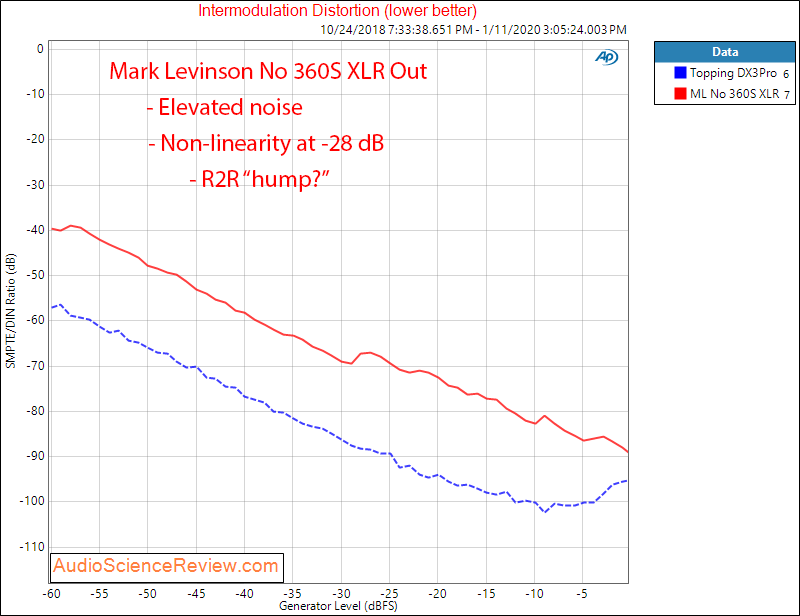 And there is that sudden rise in distortion at around -28 dB.

THD+n versus level is good but again, not compared to today's products: 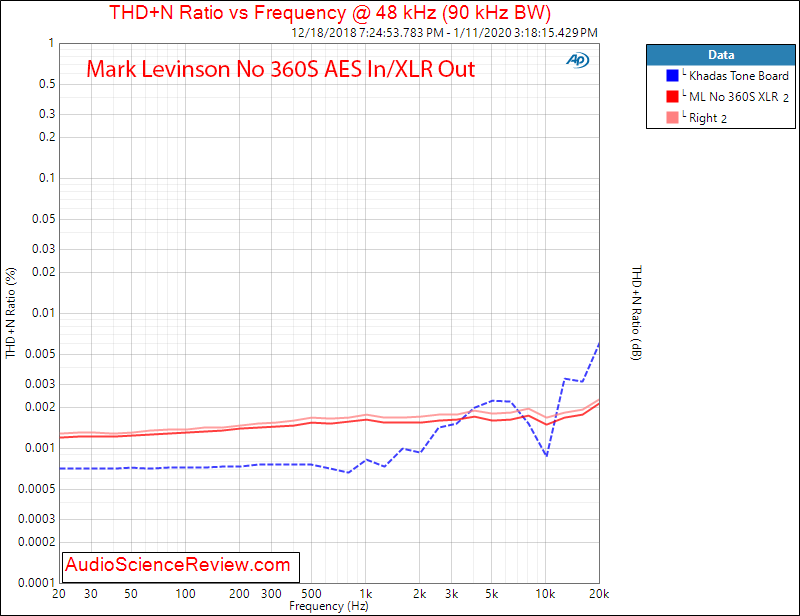 Here is the spectrum of 1 kHz tone going to 90 kHz as used above: 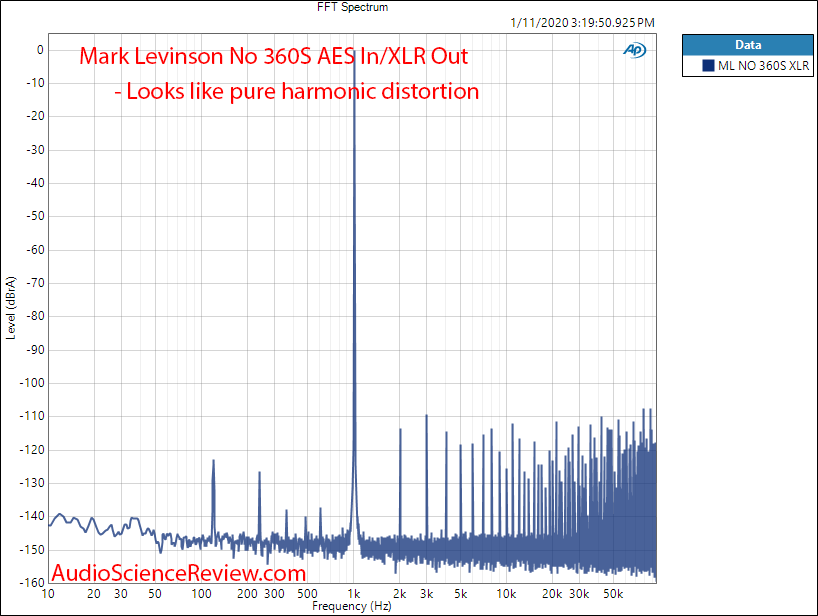 So no funny business: just plain old harmonic distortion that seems to keep going and going.

I bought this DAC because I saw a measurement in stereophile that said it had superb linearity and it easily bested the built-in DACs in SACD and DVD-A products of the time: 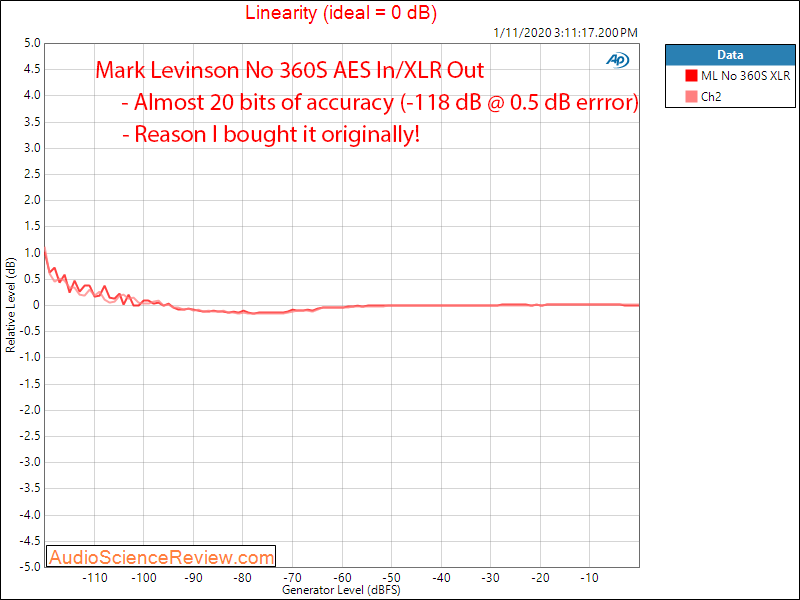 Now that is darn good! Who says R2R DACs have to have poor linearity? Only those companies who don't know how to implement it well.

Conclusions
No, you would not run out and buy the Mark Levinson No 360S today. Were there cheap choices then that were good? We will never know without a time machine to go back and measure as we do today. I can say that nothing is broken in it. It produces performance above 16 bits resolution without any glaring mistakes or issues as we commonly see in R2R DAC products today.

FYI now that I pulled it out of my system, I will be putting a Matrix Audio DAC in its place. Thank you my old friend for two decades of service. You were expensive to marry to but good mate to have had.

I need to throw a retirement party for the No 360S. Given his long service, I can't be cheap about it. So please help make that happen by donating using: https://www.audiosciencereview.com/forum/index.php?threads/how-to-support-audio-science-review.8150/
Amir
Founder, Audio Science Review
Founder, Madrona Digital
Review Thread Rules
My Technical Background
My YouTube Channel

I never ever thought I would be seeing a Mark Levinson review here but here it is! >@^_*@<

Thanks for running these tests. I used to own a No39 CD player a long time ago. I loved that thing. Awesome ergonomics. I always wondered how these old Madrigal/Levinson products performed with modern test equipment.
OP

Yes but I am not sure how I am going to convince my wife to help carry it. And what that will cost me!
Amir
Founder, Audio Science Review
Founder, Madrona Digital
Review Thread Rules
My Technical Background
My YouTube Channel

@amirm You have a well trained hearing, coupled both with an Atom amp ..... do you hear any differences between such a vintage DAC and the Hidzis Dongle ???? Any coloration, musicality, whatever .....??

@amirm which Matrix DAC by the way?
An audio purist, not really an audiophile

Nice review, Amir. You should sell her to help finance the Klippel! If you found the remote, you'd get a very decent price.
Stealing AdamG247's legendary quote: "I think we can almost all agree that this thread is Dead. Living on life support, and I’m pulling the plug."

amirm said:
makes it a pain to connect and disconnect.
Click to expand...

My previous amplifier, the Luxman L-3, had its signal connectors placed on the bottom of the unit, in the name of "shortest signal path".

The contortion of holding the unit up (20 lbs) with one hand, performing the connections then putting it back down is something only L-3 users could understand.
siuper dodgee!

Try wiring up a TAE-86B when rackmounted... (yes they are RCA jacks on the top left and RH side) 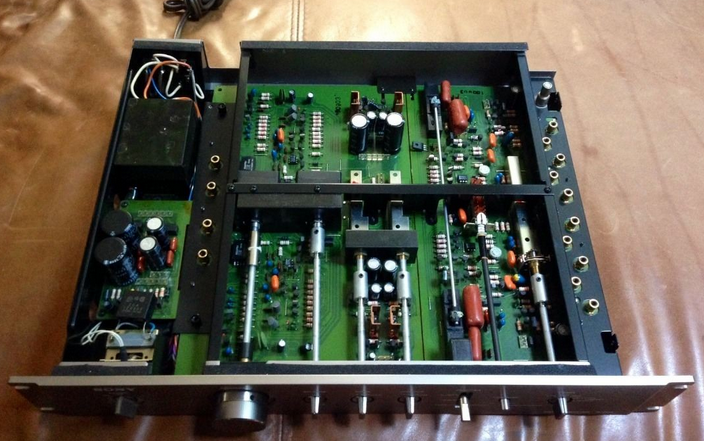 Or a big Pioneer SA-9900 in a cabinet. The cables need to pass through the rear handles... 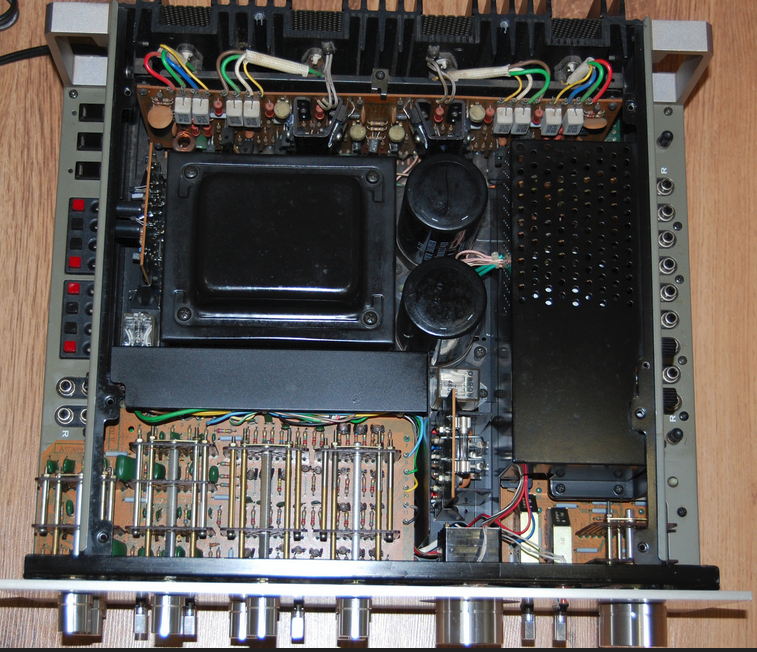 Peak insanity was the two piece, plug together Sansui G-33000 with all its connections on the side, recessed for pure evilness. All 45.4kg of it. 100lbs!

Stealing AdamG247's legendary quote: "I think we can almost all agree that this thread is Dead. Living on life support, and I’m pulling the plug."
G

I often wonder why these amp kits don't do similar to make room on the backplate and to keep from running the high power lines up the entire internal length of the amp, past the amp boards and finally to the PS.
B

Just think of the $3k payday you get for selling it on ebay.

I wonder if that cap replacement caused the 1dB difference in SINAD from channel to channel, given it appears fairly dual-mono from the interior (can't see the xformer). Come on Amir, if you're going to change a cap in one channel, you have to do it in the other while you're in there!
L

how does it sound tho? the preamp section of this beast must be mighty good.
OP

Lotus97 said:
how does it sound tho? the preamp section of this beast must be mighty good.
Click to expand...

would you agree that preamp sections of these desktop DACs is what separates them apart? do you recommend external preamps with DAC's like D5 and others?

when I look at the insides of my D5 and this DAC it just looks underwhelming on my end.

Lotus97 said:
would you agree that preamp sections of these desktop DACs is what separates them apart? do you recommend external preamps with DAC's like D5 and others?

when I look at the insides of my D5 and this DAC it just looks underwhelming on my end.
Click to expand...

That's a great assertion, and one that has kept me away from using the little wall wart or USB powered DACs as a preamp. I've always worried that they wouldn't have enough juice to go the distance, but in the tests that Amir has done, even the tiniest op amp powered USB DAC can still provide a solid 2V output for SE inputs to an amp, and the better stuff with balanced outputs is hitting their nominal 4V. That's just power voltage output of course.

I was assuming (I know, I know...) that when he measures these DACs, the output of the preamp signature is combined with that of the DAC, at least in the initial dashboard figures.

amirm said:
My arm was twisted and broken before it happened....
Click to expand...

Now the Salon IIs on Klippel NFS!
You must log in or register to reply here.