This is a review and detailed measurements of the Kanto YU6 powered speaker. It was kindly sent to me by a member and costs US $499 on Amazon including Prime shipping.

The YU6 comes in different finishes, all of which look pretty attractive. The sample I have is black: 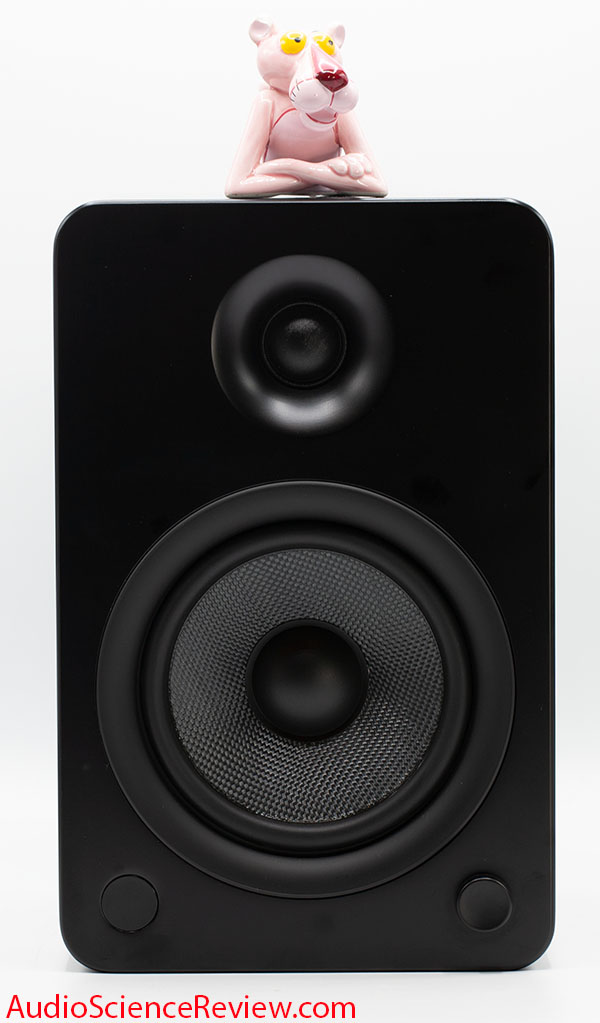 As you see, you have a front volume control which is great for a desktop monitor. A remote control is also provided which is even more convenient to use as it also lets you select many other options including different inputs: 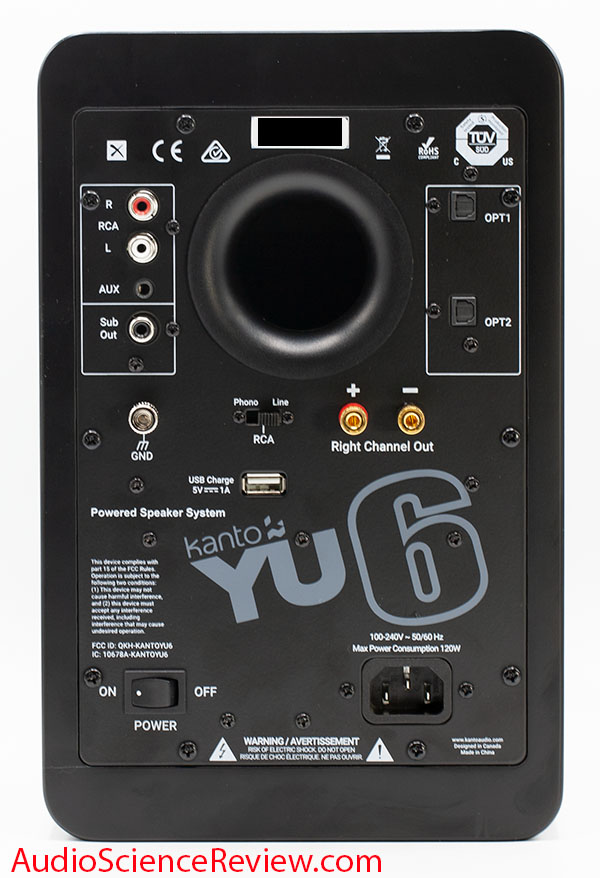 I don't think I had seen a powered monitor with phono input before! Very nicely done as far as inputs and feature set.

I performed over 1000 measurement which resulted in error rate of roughly 1%.

Kanto YU6 Measurements
Acoustic measurements can be grouped in a way that can be perceptually analyzed to determine how good a speaker is and how it can be used in a room. This so called spinorama shows us just about everything we need to know about the speaker with respect to tonality and some flaws: 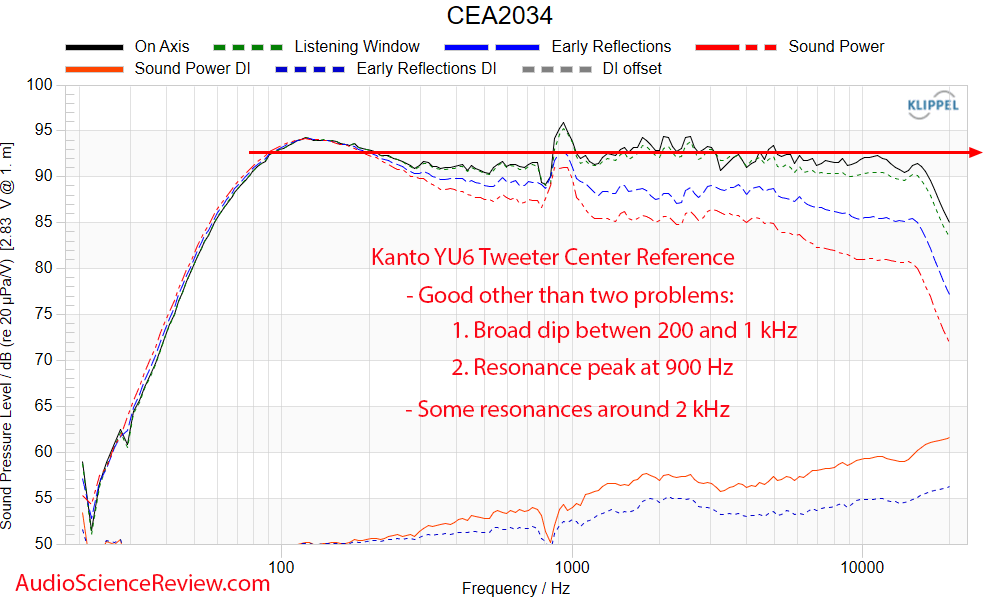 Response above 1 kHz is pretty good. Below that we have a peak that is most likely a resonance and a wide dip. Looking at the near-field measurements of the drivers we instantly see the reason for that peak: 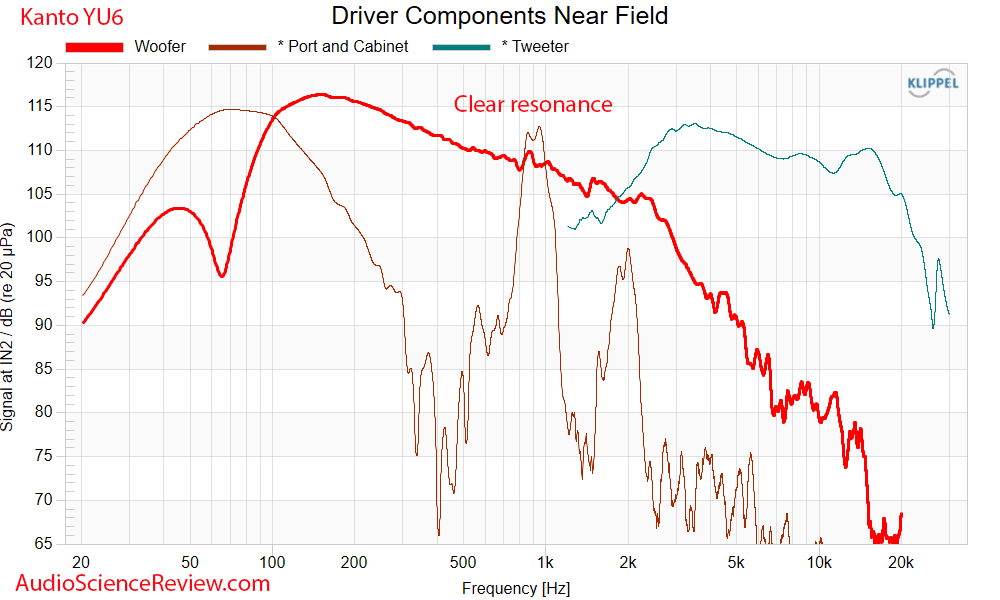 We see the same indications in the CSD/waterfall display: 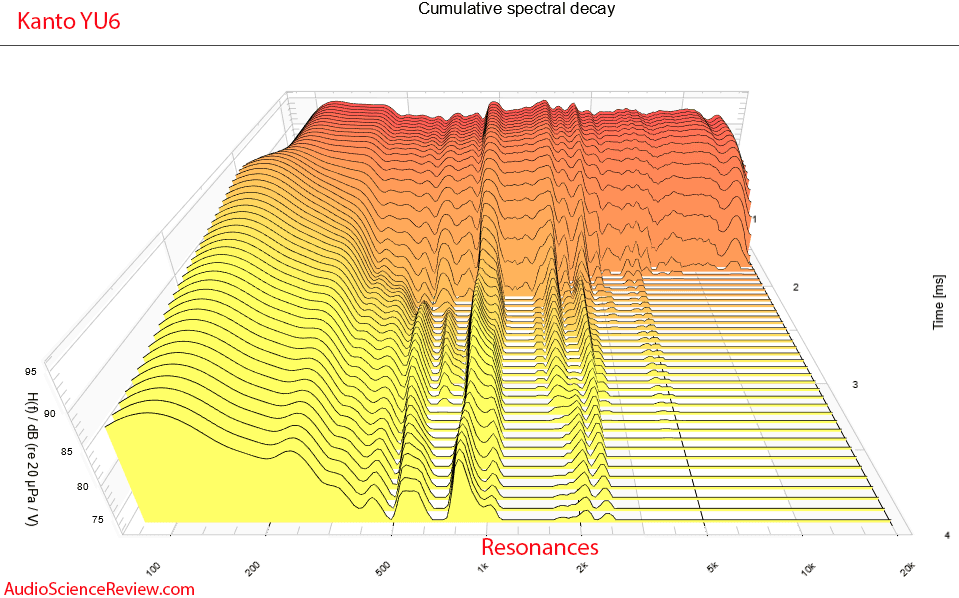 Due to decent directivity off-axis response looks similar to on axis: 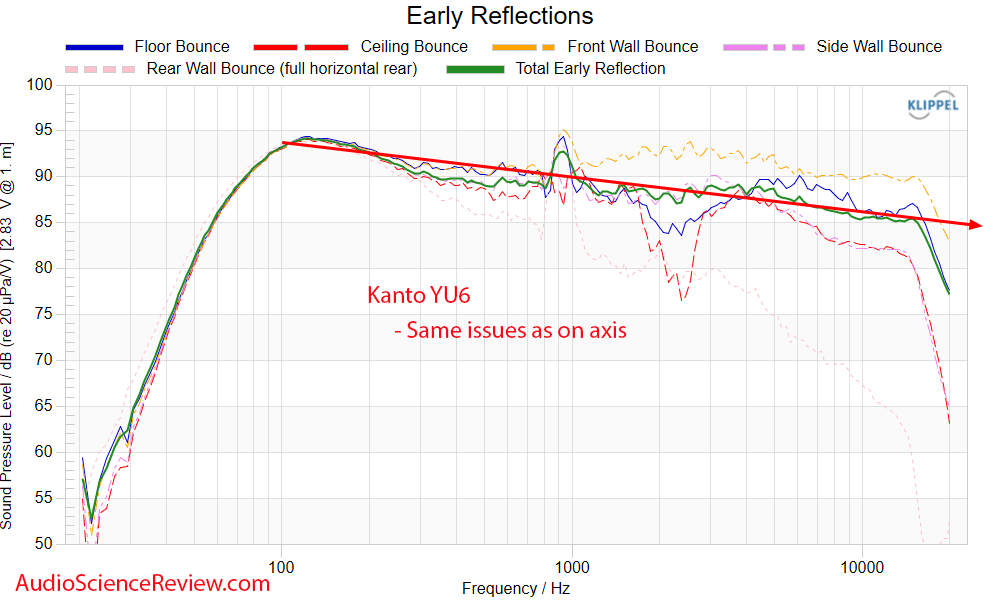 Combined, we can predict the far-field response of the speaker in a room: 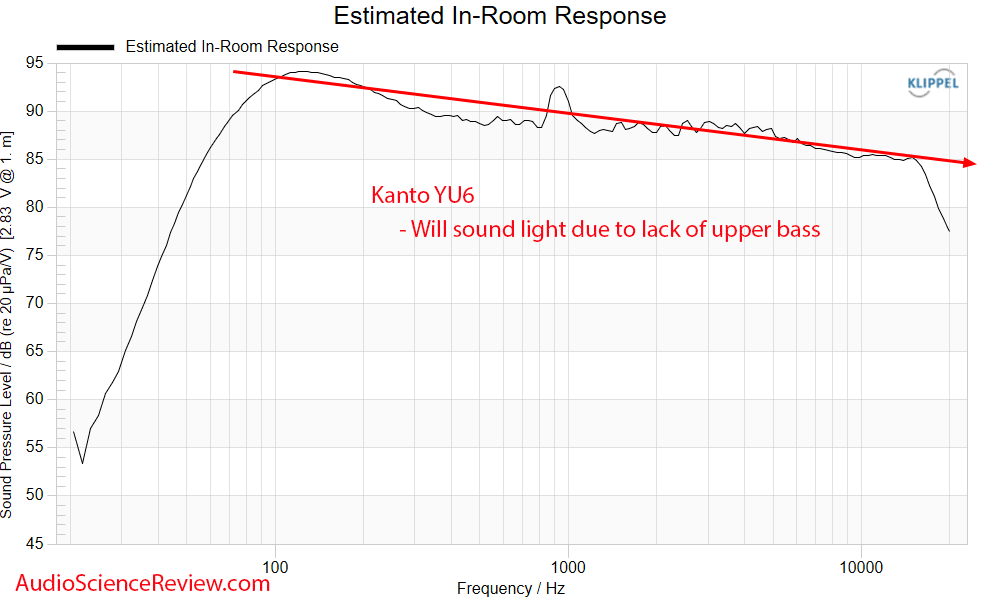 Same story as the on-axis response.

Horizontal beam width is decent but narrows at higher frequencies so you would want to point the speaker at your ear: 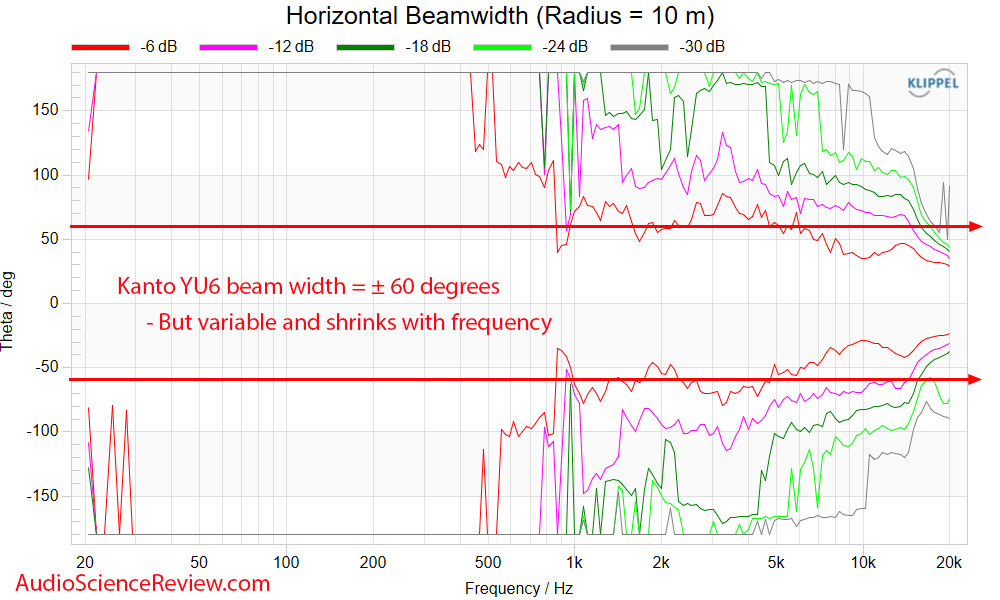 Or not if the highs bother you too much. 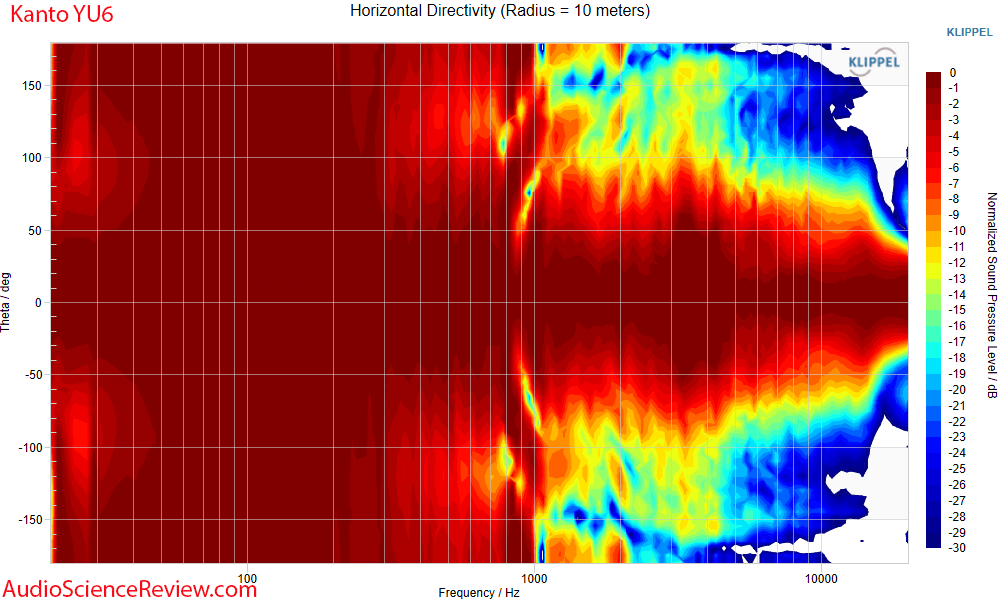 Vertically story is typical of 2-way speakers. Stay close to the tweeter axis (tilt the speaker up if you have to): 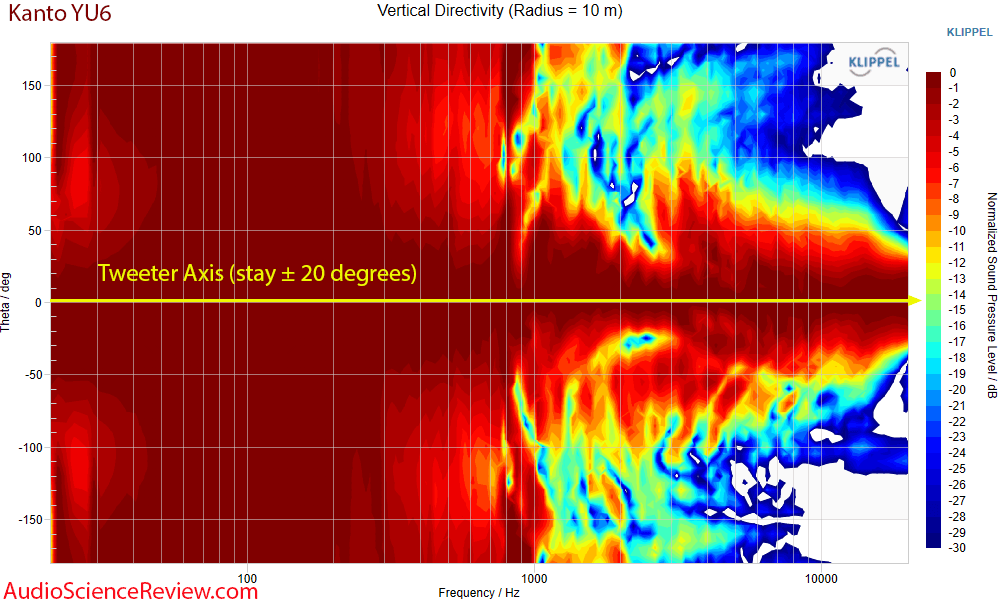 Distortion story is very good at 86 dBSPL and even at 96 if you ignore the very low frequencies:

Kanto YU6 Listening Tests
First impression was reasonable with the highs stand out a bit. So I brought out the EQ and went after both the resonance and bass dip: 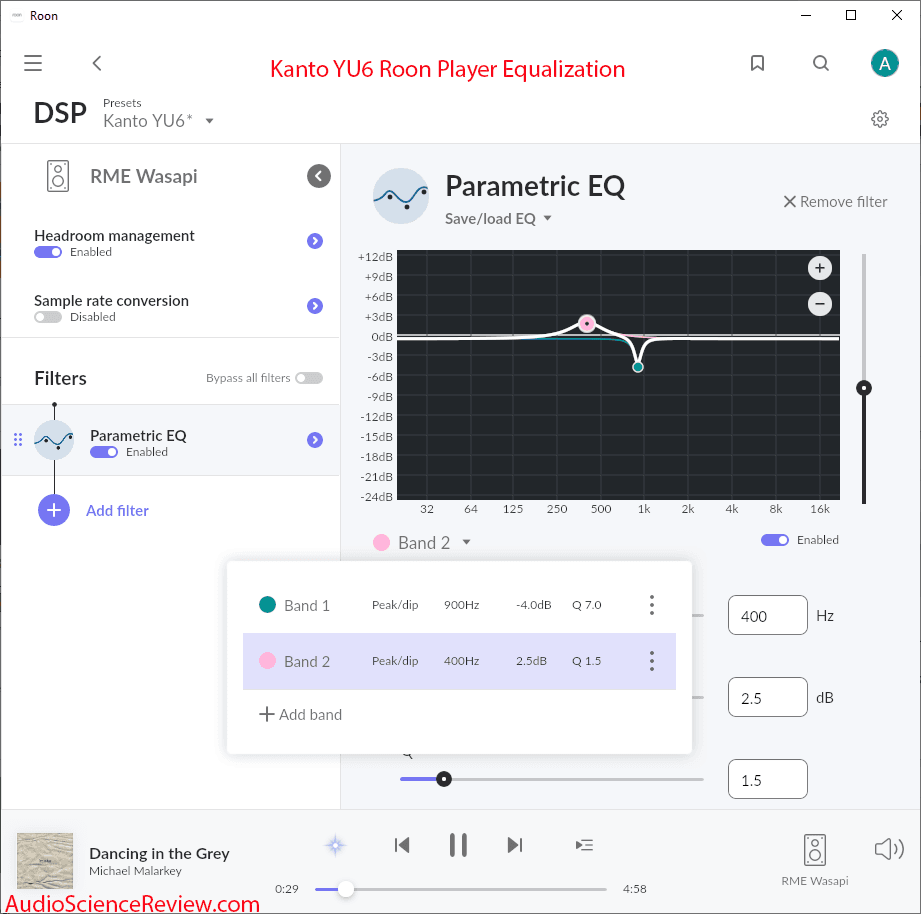 Compensating for low frequency shortfalls with EQ based on anechoic measurements is tricky as the room interferes. Here, the deficiency was enough that I managed to make some correction but any more adherence to the measurements didn't translate as well across different types of music. So at the end, I stayed with the above simple one filter. Once there, music was more balanced and bass that now could be heard properly.

I was extremely impressed with the dynamic ability of this speaker. You could crank it up with seemingly no limit! Vast majority of powered speakers are underamplified. Not the YU6. I could detect no limiting kicking and the sound would get as loud as I possibly wanted it in near-field listening. There was plenty of bass to boot. I have learned to detest amplifier limit in powered speakers more than frequency response errors. I can fix the response with EQ. I can't do anything about the amplifier running out of the juice and creating all kinds of noises.

Conclusions
The YU6 has two simple issues that are easily fixed using EQ. Once there, you have a powerful little speaker that plays well with incredible functionality. On the latter front, it goes way past what professional monitors provide with such niceties as remote control.

I am going to recommend the Kanto YU6.

Thanks Amir, glad to see the EQ makes a decent difference. There is a lot of good stuff that lives in the 100-1000 range and vocals, guitars, and other things just won't sound right if that area isn't dialed in.

Winter's coming and these will be great in the garage.
R

For a minimalistic desktop system, a very nice "package" indeed. Even a sub out and phono are aboard.
The "sins" measured are minor for such application.

Nicely done!
An audio purist, not really an audiophile

Is there a sub out for each channel? I've read that simple summing is not the correct way to do a sub out...
R

The "slave" box will be passive, so only one sub out.
M 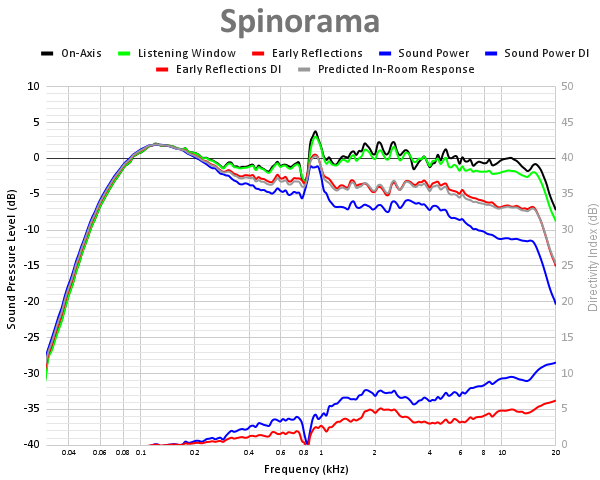 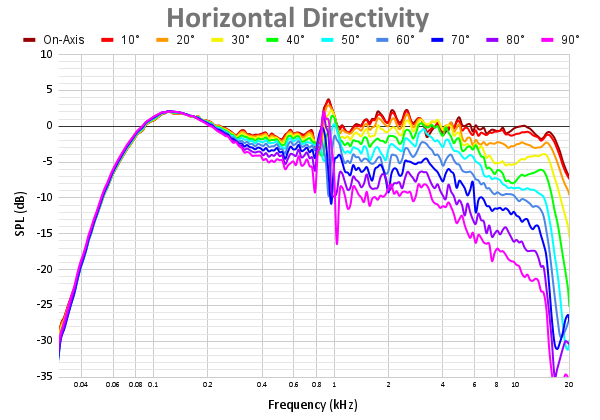 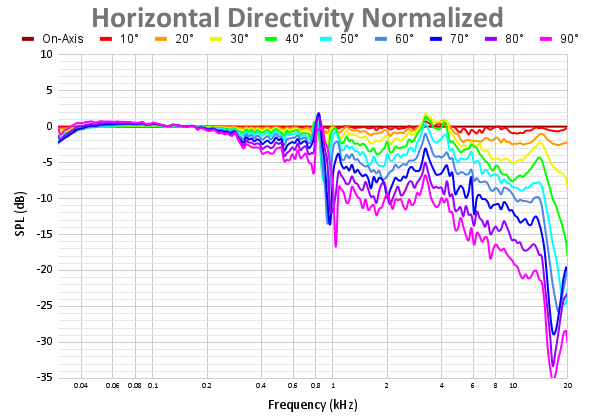 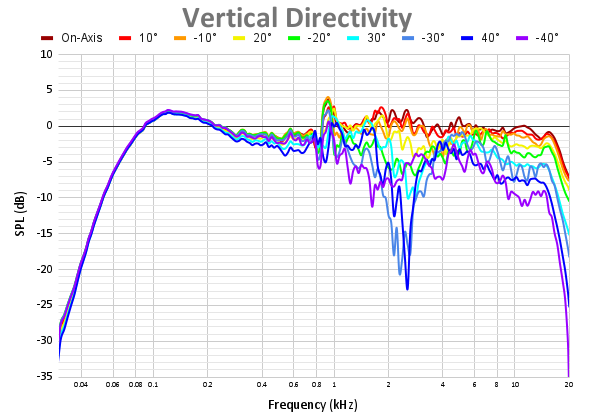 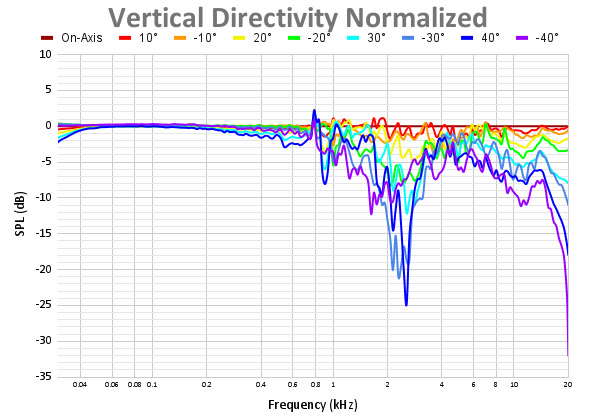 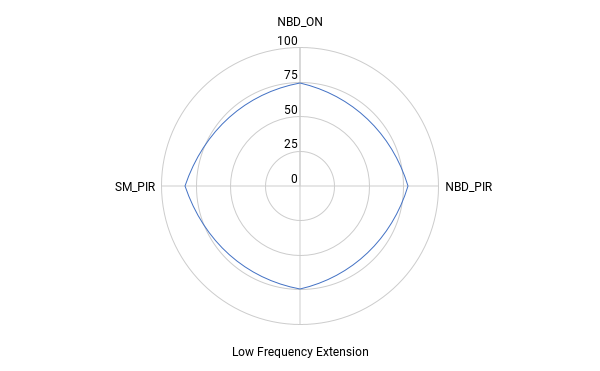 respice finem said:
Even a sub out and phono are aboard.
Click to expand...

Damn, the one thing that has always bugged me about my Yamaha NX-N500 is the absence of a subwoofer output. These speakers do lack a USB DAC input however (which the Yamaha has) but they do have a higher end model -- the Kanto TUK -- which has both a USB DAC input and a subwoofer output as well. The TUK's are beginning to look awfully tempting as a replacement to my ageing NX-N500's: Delivering clarity and performance that put it in a class of its own, TUK is designed to push the limits on what a bookshelf speaker can achieve. Fine-tuned with onboard DSP, its high-performance AMT tweeters and 5.25” aluminum drivers produce sparkling highs and rich bass, bringing life to all...

I do like a minimalist desk so I typically prioritize active speakers with built-in DAC's which allow me to connect the speakers directly to my PC which greatly reduces clutter. Does anyone here have any experience with the Kanto TUK?

This has been one of my go-to recommendations for years for a living room powered speaker. $400-$500 that has optical, Bluetooth, remote control, sub out, tone controls, etc. The remote control is very important for a living room as many modern televisions no longer have analog out and the optical output from a television means the tv volume is fixed.
I own the smaller YU5, and even that little thing I am impressed by how loud it gets.

Here’s the remote BTW to show the functionality:

Just got a pair of Kanto yu6 and haven't had much time to listen or measure but from what I have done so far there is something very off with these. Listening so far has been nearfield and they sound like the mid range is sucks out. Male vocals sound like there is an absorber placed over the... 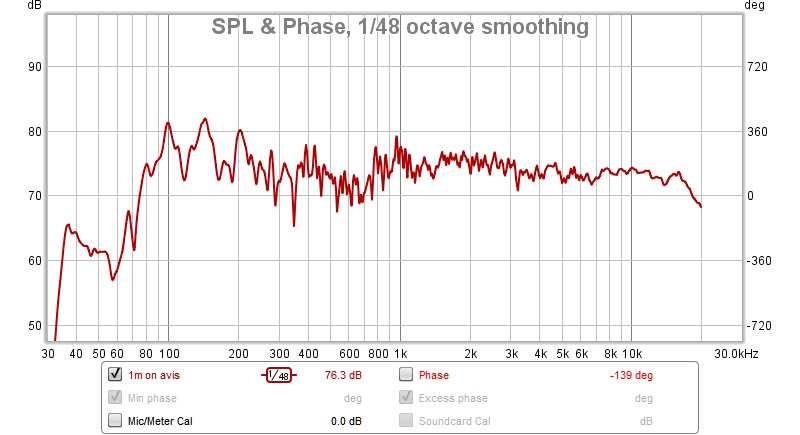 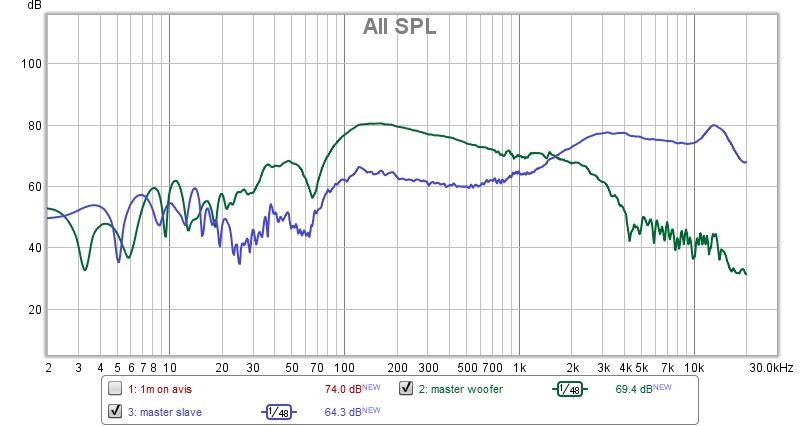 amirm said:
I have learned to detest amplifier limit in powered speakers more than frequency response errors.
Click to expand...

@amirm Does it hiss? If I may suggest this should be part of standard active monitor testing procedure as it can be a deal breaker for many customers.
Last edited: Oct 16, 2021
Amplifier SINAD list

*sigh* they should abandon the ported design in such small speakers.

hmt said:
*sigh* they should abandon the ported design in such small speakers.
Click to expand...

This would sacrifice bass extension, so I think it was weighted pros and cons.
Last edited: Oct 16, 2021
Amplifier SINAD list

Matias said:
@amirm Does it hiss? If I may suggest this should be part of standard active monitor testing procedure as it can be a deal breaker for many customers.
Click to expand...

I own the YU5, for a desktop application, I can hear it hiss a decent amount (not super faint but not immediately obvious).
I recommend the YU6 for living room applications, where it wouldn’t be an issue.
Loudspeaker Data & Preference Ratings

It would be very interesting know why Kanto's end up with a minor lower bass boost and slouch from 100-1000hz, or so.
Here is the measurement of the YU with the much smaller woofer 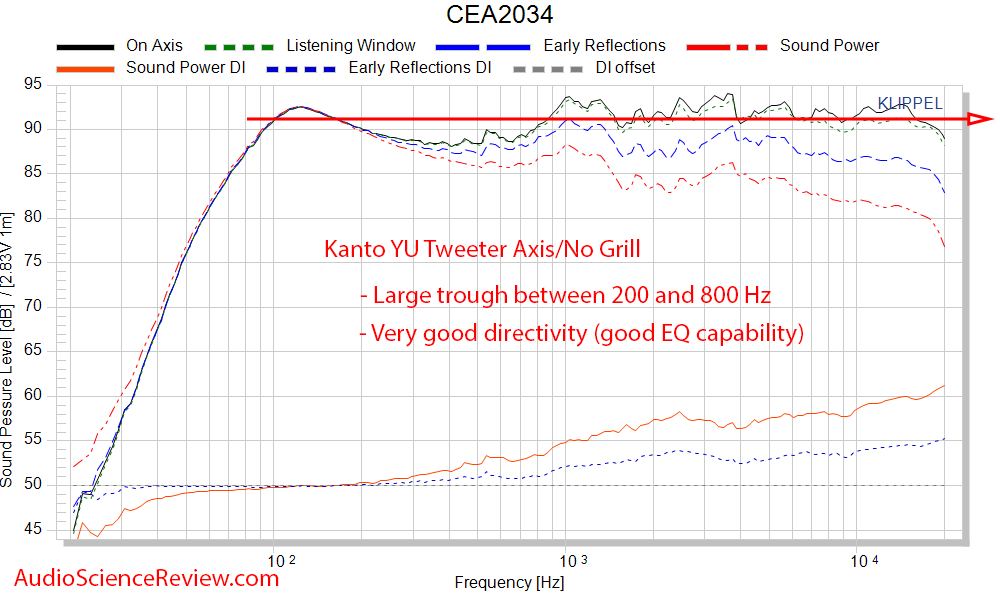 Seems like with a little work tracking down the resonances and fixing the missing energy around 100-100hz the Kanto yu6 would be much better.
However it is also possible the lacking response is intentional and that if they spent the money to fix the resonances they will price them out of their sweet spot to sell enough.

I wish the company would send Amir a Tuk but from what I have seen they have a tweeter boost/shelf like or bigger than the Adam t5v.

I for one would pay more money for a speaker without these issues. Looking at the other powered speaker under $1000 it seemed they all had issues. Especially if you want a silk dome tweeter and not metal/amt.

Matias said:
@amirm Does it hiss? If I may suggest this should be part of standard active monitor testing procedure as it can be a deal breaker for many customers.
Click to expand...

When using it with built in toslink I heard no hiss at all.
I'll test for hiss with all input's when it gets back.

I had to send back a pair of swan 200mkii because they hissed like angry snakes.
R

Hiss audibility will depend on how quiet the listening environment's background is. City traffic will create constant background noise, as will PC fans.
Last edited: Oct 16, 2021
You must log in or register to reply here.