Please forgive what may be a very silly question.

I own a Yamaha R-N803 stereo receiver. I would like to purchase headphones for use with this unit. They won't be used for any other purpose.

I've been told that the R-N803 will not have enough 'oomph' to properly power a set of Beyerdynamic DT770 Pro 250 ohm headphones. I am looking at the 250 ohm version because I have read that it delivers a clearer sound than its 80 ohm or 32 ohm counterparts, but obviously I don't want to purchase them if they will have comprised volume due to a lack of power. I do not want to purchase a dedicated headphone amp.

Any thoughts on this? Should I be looking only at 32 ohm headphones?

According to the manual, the R-N803's headphone jack has an output impedance of 470Ω and a maximum output level of 0.47Vrms.
Tbh, I'd forget about using the headphone output at all.
OP
B

I'm grateful for your reply. At the same time, I don't understand it. Are you saying that the headphone output is poor? I'll do some reading to try and figure out what those numbers mean, but with apologies, I know very little about audio.

I think it will do just fine with 80 Ohm's one's at least R-N402D that I have does (same idiotic specs regarding manual). It won't sound great but it won't sound bad. Wouldn't exactly go for DT770 Pro if I whose you.

Or something else, I am sure there will be more proposals.

because I have read that it delivers a clearer sound than its 80 ohm or 32 ohm counterparts,
Click to expand...

Probably not true. It would be kind-of dumb to sell different impedance versions of the same model with different sound.

Higher impedance generally means less voltage-sensitivity because with lower impedance (and the same voltage) you get more current. Impedance and resistance is the resistance to current flow and power (wattage) is calculated as Voltage X Current. Assuming lower sensitivity, you are less likely to hear background noise...

Are you saying that the headphone output is poor?
Click to expand...

Lower source impedance (relative to the headphones) is more desirable as is higher voltage. Just for example, an amplifier designed to drive 8-Ohm speakers usually has a source resistance of a fraction of an Ohm. If you get a spec, it's expressed as the "damping factor" which is a ratio.

The internal source impedance along with the headphone impedance makes a voltage divider with the voltage divided proportionally to the resistance (or impedance). This means voltage is lost before it comes-out. And there is another undesirable effect - Headphone impedance (and speaker impedance) is not "flat" across the frequency range. This means the voltage divider varies across the frequency range and you get frequency response variations. A bump in impedance makes a bump in frequency response and a dip makes a dip. ...Sometimes you might like it if it turns-out to have an impedance bump in the bass and you get a little boost in the bass. But, headphones (and speakers) are tested & specified with a low-impedance "constant voltage" source.
OP
B

Thanks all. This is far more involved/complicated than I expected. I have some reading to do, clearly.

Don't let us spook you. You won't run high impedance hedaphones good (nor most planar one's) without good deticated hedaphone amplifier (which can provide enough voltage). Power amplifiers, and portable gear don't come with those but they aren't expensive (starting from 120$ with alikes like Schiit Heresy Magni III).
You don't really need or want high or low impedance hedaphones that are one or other way hard to drive. The one's starting with 24~32 Ohm's (for portables and such and output of 1V) and up 64~80 Ohm's (nominal for 2~2.5V out) are one's you should look for (of course this applies to one's with traditional dynamic driver's and not to electrostatic [which come with their own amp] or planar). Of course do the reading and more than once.

Here are some rough calculations of the max voltage (and power) you can expect for headphones with various impedance. The summary is that the Yamaha has plenty of output into headphones with impedance of ~60 ohms or higher. For lower impedance headphones, you need to check their sensitivities.

The important caveat is that the source (output) impedance is very high, and will definitely change the frequency response of headphones with impedance that varies with frequency (i.e. pretty much everything except planar magnetics). For many dynamic headphones, because of the typical rise in impedance at low frequencies, you will get a bass boost that is actually be desirable to many. 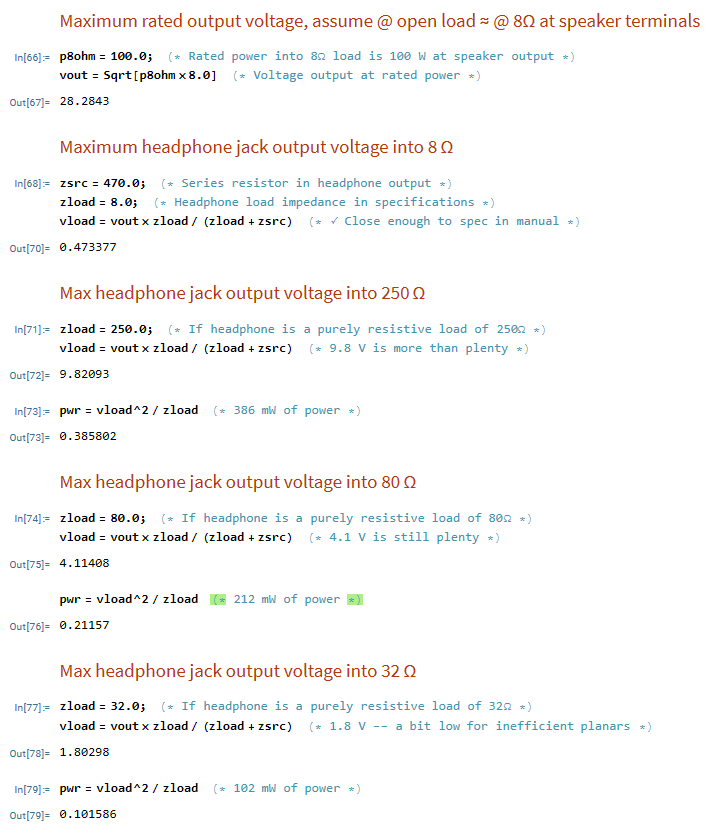 Thank you so much for this. That is a really useful list.

@NTK why does the output voltage increase when you go from 32Ω load to 8Ω?

staticV3 said:
@NTK why does the output voltage increase when you go from 32Ω load to 8Ω?
Click to expand...

Please forgive what may be a very silly question...
Click to expand...

This is not a silly question at all, BRVO.

Choosing the right combination of headphones and amp requires a somewhat sophisticated knowledge and understanding of power, voltage, current, and impedance... especially if you are operating on a lower budget.

Some folks here obviously know what they are talkin about. While I can get easily confused by watts, volts, amps and ohms. So bear that in mind as you read the following. I'll try to address a few of the questions re impedance though. And maybe someone else will jump in, if I begin to stray too far from the facts, and general logic.

The thinner coil on the 250 ohm version has the most mass, because it is (presumably) the longest, and has the least space between the wires or coils. The greater the mass, the more the voice coil will impede the flow of current. Ergo, greater impedance. That may be a bit overly simplistic. But I think that is more or less how Beyerdynamic explained the differences to me, back when I was trying to decide between the different headphones.

I tested both the 80 and 250 ohm versions of the DT-770. And did find some noticeable differences in their sound... which is to be expected.

High impedance and low sensitivity may not sound like good attributes to have in a headphone. But imo, this usually results in the best sound quality. It does make the headphone somewhat "harder to drive", and lower in volume though... unless you can supply it with a bit more power to compensate.

The lower volume has some other advantages though. Since the signal is more attenuated downstream, in the transducer, it can be run hotter upstream, with a lower potential noise floor.

The higher impedance on the 250 ohm version means it also has the highest damping factor, and best electrical damping of the three headphones. Which, imo, also translates to better clarity, and sound quality.

So what you loose in volume and sensitivity is a gain in other ways, namely lower potential noise and distortion. And better overall signal clarity.

In my listening tests, the 250-ohm version also seemed to have the best extension in the sub-bass and treble. Or best tonal depth. And this seemed to be also confirmed (more or less) by Crinacle's frequency response graphs of the two headphones.

The 250 ohm version will be the most forgiving in terms of its sound quality, especially on higher impedance amps. But it is also the hardest to drive, and will require the most power. I wouldn't describe it as a "power hog" though. And based on NTK's figures, I suspect there is more than enough power to drive it to very good volumes on an AVR like the one you're considering. (I suspect that would be the case with most integrated amps and AVRs. Though this is not something I've personally tested.)

I went for the 250 ohm version because I like its more extended frequency response. And because I mostly use it on a dedicated headphone amp, which has ample power for its needs. And may also use it on some pro audio gear where the impedance is higher, and sound quality is not as good. All of my gear is quite inexpensive though. And the fact that the 250-ohm version is more forgiving in terms of noise and damping certainly helps.

If anything it is probably being over-damped on my current 1 ohm amp (a Bellari HA543). Which could reduce its longevity. And probably wastes some energy. The detail and clarity is outstanding though, for the price. And I generally listen at very moderate to low volumes, which helps.

Alot of people will choose the 80 ohm version though, because it's somewhat easier to drive. And a little more flexible with different powered devices. Most seem to avoid the 32 ohm version, for the reasons stated above.

The DT-770 is a rather bright, and dry sounding headphone though. And it needs EQ imo to give it better warmth, and to fix some other imbalances in its frequency response. So depending on the type of music or content you listen to, it may not have the best sound in terms of its default sound signature, and tonal balance. You could probably correct some of that with the built-in EQ or tone controls on an AVR though.

Also, if the 470 ohm spec on the Yamaha receiver's headphone output is correct, that would only provide a 0.53 damping factor (250/470 ohms) with the highest impedance DT-770! Which would probably still be too low to eliminate potential audible distortion that could result from inadequate electrical damping. By most accounts, the impedance of a transducer should be at least 6 to 10 times the source impedance to provide sufficient damping for this. The 250 ohm version would, I think, clearly be the best choice of the three headphone impedances though, from this standpoint... Perhaps that 470 ohm impedance on the Yamaha's headphone jack is wrong though?

An amp or headphone jack with an output impedance as high as 470 ohms would not provide effective bridging for most headphones currently on the consumer market. So this makes me wonder a bit if there could be some error in that spec.

Since the DT-770 is a closed headphone, it will also not give you quite the same sense of openness, breadth, or dimension in its sound (audiophiles usually refer to this as "soundstage") as a more open headphone could.
Last edited: Aug 25, 2022
ADU's Gear
OP
B

Adu, I am late returning to this thread, so many apologies for my tardy reply. This is a wonderful explanation, and it really helped a novice like me understand some of the fundamentals associated with this topic. I can't thank you enough for taking the time to set all this out, as it really clarified many points that were way over my head earlier this week.

Thank you to ALL who have assisted on this. What a great community! Many thanks.
You must log in or register to reply here.