I inherited a set Polk Audio speakers (ca. 1996) that I am using as a desktop system. I was able to find a HiFi Magazine review of the speakers, that included a verbal description of their test results here - http://www.hifi-classic.net/review/polk-audio-rm3000-574.html.

To synopsize: The RM 3000 "system" consisted of two satellites (RM2000s) and a passive subwoofer (RM 1000). Each satellite has a 3-1/2-inch "woofer" operating above 200 Hz and crossing over at approximately 4,000 Hz to a 3/4-inch dome tweeter. The subwoofer (20" x 13" x 10") is divided into two chambers - the first has two 6-1/2-inch cone drivers, each driven by one stereo channel, and each subwoofer channel is wired in parallel to the corresponding satellite (L&R). These are mounted to the internal dividing wall and the second chamber has a 10" passive radiator (at the bottom and 2" off the floor) that is driven by changes in pressure from the cone drivers.

From a subjective standpoint, the speakers and subs sound pretty good w/o EQ but the bass can be a bit "boomy" and the higher ranges a bit shrill at times. The HiFi-classic.net review has a section that includes their test measurements (included below, no graphics unfortunately). Based on the prose description of their test results, I've been trying to setup an EQ in Roon. What I am trying to address with the settings shown are "peaks at 65 and 180 Hz and a 7.5-dB dip at 110 Hz, rolling off at 6 dB per octave from 180 to 400 Hz", and then attenuating the described resonance at 16 kHz.

I am new to all of this, still reading and re-reading Dr. Toole's book and trying to comprehend all of the information on this sight, so I definitely may be missing the mark. If anyone has any feedback or suggestions on what I've come up, it would be very much appreciated.

Thanks in advance for any help that anyone can provide!

Here is what I came up with: 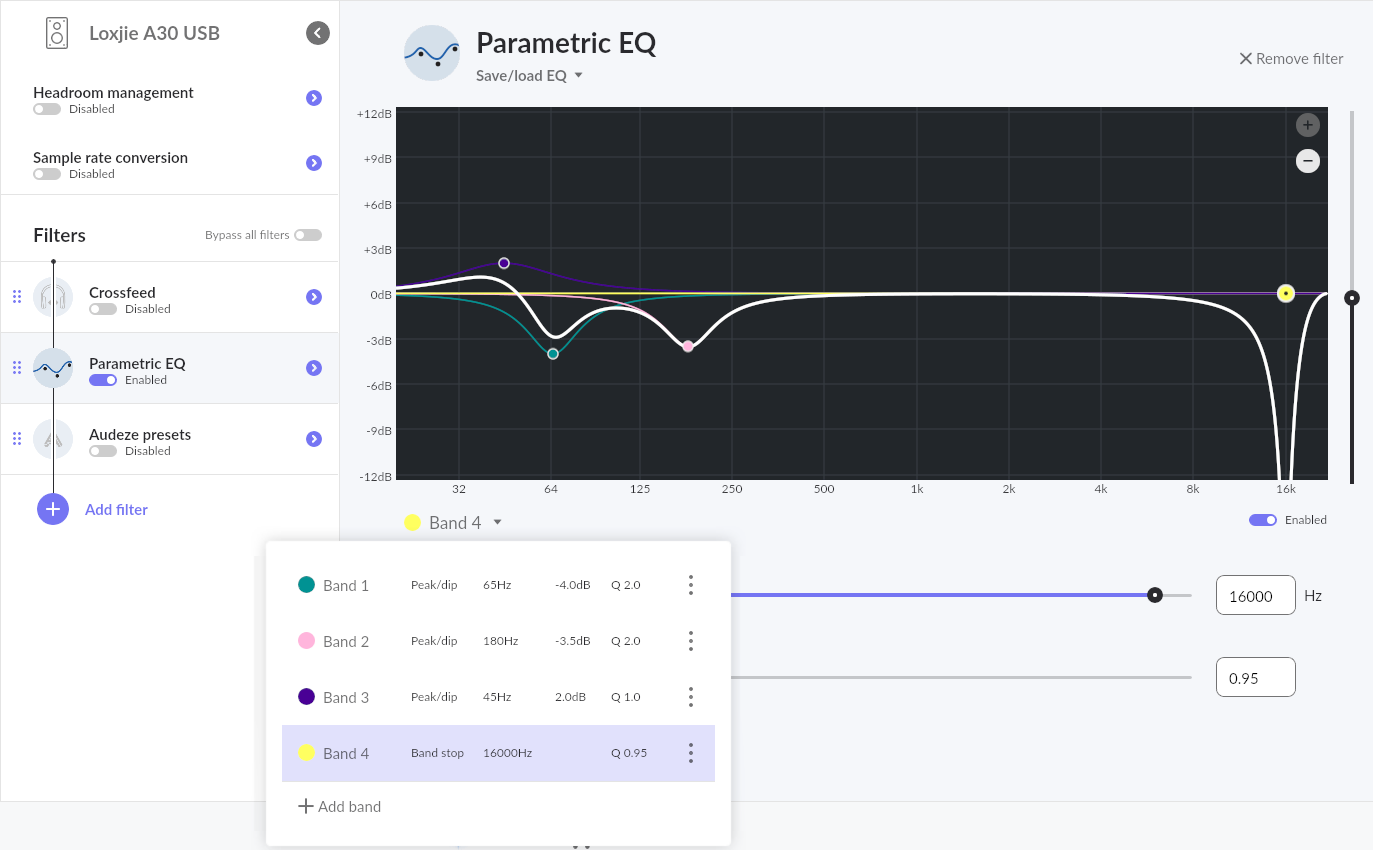 Here is the measurements portion of the narrative from HiFi (http://www.hifi-classic.net/review/polk-audio-rm3000-574.html):

According to Polk, the passive-radiator coupling reproduces the low frequencies more efficiently than a simple port radiator, while the mass and size of the passive cone (called the "sub-bass" radiator) attenuate the higher frequencies, providing an 18-dB-per-octave rolloff matching the low-frequency rolloff of the satellites. Since each driver is connected to one of the stereo channels, the two channels are acoustically blended throughout the subwoofer's operating frequency range (which contains virtually no directional information). Although the subwoofer's response rolls off naturally above 170 Hz, the unit also contains a first-order low-pass filter to avoid wasting amplifier power above its operating range.

The specifications for the RM-3000 include a frequency response of 42 to 18 000 Hz at the -3-dB points, a nominal impedance of 6 ohms, and a sensitivity of 88 dB sound-pressure level (SPL) at 1 meter with an input of 2.83 volts. The system is recommended for use with amplifiers rated for 10 to 125 watts per channel.
Our test system was a prototype but it is essentially representative of regular production models. The satellites were finished in a dark gray with white speckles and a black grille, but other colors may be offered in the future. The subwoofer is finished in black vinyl. The terminals on all the units are multiway binding posts spaced to accept dual banana plugs. Price: $750.

Measuring the frequency response of a three-piece speaker system somewhat more complicated than measuring that of a conventional single-unit design. Since there is no fixed spatial relationship between the satellites and the subwoofer, it is not practical to specify an overall frequency response that will be realized in all environments. Fortunately the technique we use to form a composite frequency response-involving measurement of the room response of the speakers from a few hundred hertz to the limits of audibility along with separate close-miked woofer measurements that are essentially independent of the speaker's surroundings-is well suited to three-piece systems. In fact, a variation of this method is used by Polk for measuring the response of the RM-3000.

We placed the satellites about 8 feet apart on 26-inch stands (not the Polk stands designed for them, which were not yet available), with the subwoofer midway between them and. like the satellites, about 2 feet from the back wall. The averaged room response of the two satellites, with the usual minor irregularities, was an excellent ± 3 dB from 350 to 19,000 Hz. At lower frequencies the room's standing-wave patterns produced larger variations.
Polk states that the subwoofer's response must be measured in its normal placement, with the microphone on the floor next to the edge of the box, since the proximity of the floor plays a strong role in determining the final bass response. In addition, to measure the combined satellite/subwoofer response in the crossover region, around 200 Hz, we also placed a satellite on the floor, with the microphone as before but equidistant from the center of the subwoofer's passive radiator and the front edge of the satellite.

This measurement produced a response curve with peaks at 65 and 180 Hz and a 7.5-dB dip at 110 Hz, rolling off at 6 dB per octave from 180 to 400 Hz. Splicing this to our room curve produced a composite response of ±3 dB from 75 to 19,000 Hz, rising an additional 4 dB at 65 Hz and falling off steeply at lower frequencies. The -3-dB response frequencies were 45 and 19.000 Hz, approximately as rated. Our quasi-anechoic FFT frequency-response measurements (and close-miked swept measurements as well) showed approximately the same pattern of frequency response as the room-response curves. They also revealed a large undamped tweeter resonance at 16 000 Hz that did not appear in the room-response measurement but was present in test curves provided by Polk. The horizontal dispersion of the tweeter was excellent up to 10.000 Hz over a 45-degree angle. The group-delay variation was less than 1 millisecond from 180 to 15.000 Hz and less than 0.1 millisecond over the tweeter's range above 4.000 Hz. In the range of 16,000 to 18.000 Hz, there were a couple of jogs in the group-delay plot corresponding to the tweeter resonance

Peak-power tests produced a rattle from the subwoofer at 100 Hz with an input of 1,350 watts into its 4.5-ohm impedance. The satellite's woofer and tweeter outputs did not distort significantly up to the clipping point of our amplifier, 1,150 watts at 1,000 Hz and 860 watts at 10,000 Hz.

Comments
The Polk RM-3000 had an open, airy sound that compared very favorably with some much more expensive conventional speakers. Its spectral balance was excellent- smooth and seamless, and giving no hint of its three spatially separated sound sources. There was no audible brightness from the 16,000-Hz peak (much too high a frequency to affect the tonal qualities of music), but the peak was probably responsible for the slight crispness we heard on high-frequency transients, which we generally found to be an enhancement to the overall sound.

The subwoofer was not aud.ble as a separate source with the central placement we used, though moving it completely to one side of the room sometimes produced a lateral shift in the apparent bass origin. For best results it should probably be located somewhere between the satellites. Moreover, although it was exceptionally free of upper-bass emphasis, it could deliver a potent output down to nearly 40 Hz.

Summing up, the Polk Audio RM-3000 is one of the best examples of a three-piece speaker system that we have yet heard. Its satellites are not only very small but are unusually attractive as well. Best of all they sound excellent, and when you are listening to the system there is no clue that the sound is coming from the two tiny boxes, normally its only visible parts. The subwoofer, however, while not unusually large, is considerably bulkier than most others we've tested.

If you are considering a three-piece speaker system, or lack the space for a conventional system, try listening to the RM-3000. It might eliminate some common misconceptions about how large (and expensive) a speaker has to be to provide plenty of high-quality sound.
You must log in or register to reply here.

Sound & Recording review and measurements of the HEDD Type 30 MK2