Dolby Atmos and the hidden channels?

For my THX cinema I have used cheap, yes cheap and these were cheap as fish and chips three matching Dolby EX Surround SA10 decoders. Actually it's a Dolby Stereo CP45 that was made in the mid 1990's and all Dolby labs did with some "no thanks to me" with a phone call to Dolby labs, New York offices at around 9pm UK time, 1998 nearly a full year before Surround EX was even mention publicly for "star wars episode 1: the jar jar phantom surround binks". It was an idea that came to me when working as projectionist for UCI and I had it up and surrounding behind me running since 1998 with dts decoder connected to the Pioneer CLD-1750 Laserdisc player, optical output and used my Yamaha DSR-70Pro connected to the Millennium dts decoder surround outputs with x2 speakers per sidewall and x5 for the back wall and Placed 'Goldeneye' THX dts in the player and WOW it actually worked. I was ducking, even flinching due to some of the hass-effects and directional
Later years I found my first projection job at a brand new local UCI tower park "1989" only few miles away from Bournemouth. UCI was unique for ten plex cinema that used Overhead Surrounds in all ten screens as part of an "experimental idea" (which is what another ex UCI employee said to me). It was unique and performed very well thou only using Dolby Stereo 4.2.4 matrix via Dolby CP55 with SRA5 Spectral Recording SR. Worked for UCI for a year. Around 1993 dts was installed and listening to 'Jurassic Park' (1993) with Stereo Overhead Surrounds was a plus I think 5 or 6 screens had dts installed at the time while CP55 still remained and dts would have been specially wired into the CP55 so the CP55 fader can be used as the dts decoders don't have a fader to control the volume ref level which is "7" 85dB.

When listening to Dolby Atmos for first time at the Empire Leicester Square Empire 1, JBL THX with Star Trek into darkness or as I call it "into deafness" as it was a lousy skywalker mix far too LOUD and unpleasant to even enjoy, because the softer sounds are recorded mixed far too soft which makes the softer sounds not as enjoyable to listen too typical of jj abrams. In listening to a scene that had notoable Overhead surround when the imposter captain kirk, announces the crew of the Enterprise the voice sort of reminded me of UCI tower park, oh I ain't hearing anything that is new here. Only new thing about it is now they have more channels due to diff rent codec encoding/decoding but still nothing new or fresh about Overhead Surrounds. They could have included a Below Surround channel to match the on/off-screen visual sounds which they still haven't cos the sound that I hear, or few like myself will be thinking? This ain't no XYZ 3d sound format.

Surround speakers placement in cinemas and homes are still fitted on sidewalls so there hasn't been any real change in the surrounds placement for decades. Well since the 1940 was it fantasound? I wouldn't know I wasn't there. But for the 1970's to this day nothing has changed much.

The Overhead Surrounds which is what I call them as "Atmos speakers" is just a branding marketing name. Does anyone call there dtsx, auro3d. "dtsx speakers", umm, No. So auro3d thinks they have a unique speaker for the ceiling called "Vog", do they?
Move aside auro3d cos here comes DOG channels!

What on earth is a DOG channel? Well to put more less simply the overhead surrounds on Atmos or any of the dtsx, or rest of the auro3d overheads are just plain stereo overhead channels outputting from the decoder to external outboard amplifiers.

Vog (voice of god) and I am an atheist on Vog cos I hardly ever hear him? doesn't Liemax call it's upper centre channel Vog well not into Limeax branding of it's fake imax and lack of Baffle Wall behind the screen.

So what does DOG meaning? Usually god when reversed spells DOG and so there it is Dolby Overhead God. Woof! Woof! with a few Meows.

Take matching matrix decoders connect them up in the same way with outputs connected to LR inputs with a third "matching speakers" as these will voice in the middle or take the centre phantom and place it in a brand new channel just in same exact way as Dolby pro-logic did it for LCR and mono matrix surround.

You can use the extra channel on the decoder AVR to place the rear matrix or anti-phased 180 degree signal on the ceiling as single speaker or two speakers. I placed my extra channels on the floor with smaller bookshelf types which sort sounds like a vertical circle effect for each of the Height 1 Height 2 Height 3 channels.

Superman the movie us blu/4k release which has the gem theatrical six-track Dolby Stereo with directional dialog panning, while the remix Atmos is more same as the 2000 version minus few differences but nowhere as good as the theatrical mix. The Overheads sound okay and one scene I noticed when the starship escapes from "Krypton" it flies over DOG 3 to DOG 2 then DOG 1, woof, woof! DOG 3 is Height 3, DOG 2 is Height 2 and DOG 1 is Height 1, so it whooshes done the middle of the ceiling which makes sense cos its more less a mono signal being panned though Height 1, 2 and 3. So if you thought that scene was Stereo it is and it ain't some sounds will have tiny degree of stereo others depending on the decoding the decoder will see the signal and steer it to the correct channels/speakers.

For my THX cinema I have used cheap, yes cheap and these were cheap as fish and chips three matching Dolby EX Surround SA10 decoders. Actually it's a Dolby Stereo CP45 that was made in the mid 1990's and all Dolby labs did with some "no thanks to me" with a phone call to Dolby labs, New York offices at around 9pm UK time, 1998 nearly a full year before Surround EX was even mention publicly for "star wars episode 1: the jar jar phantom surround binks". It was an idea that came to me when working as projectionist for UCI and I had it up and surrounding behind me running since 1998 with dts decoder connected to the Pioneer CLD-1750 Laserdisc player, optical output and used my Yamaha DSR-70Pro connected to the Millennium dts decoder surround outputs with x2 speakers per sidewall and x5 for the back wall and Placed 'Goldeneye' THX dts in the player and WOW it actually worked. I was ducking, even flinching due to some of the hass-effects and directional panned sounds. Only used the three channels on the decoder at the time and used the fourth channel for Overhead surround around 2000 for few weeks cos I didn't have matched speakers for proper timber matching, but it worked and sounded wow, great.

Of course Dolby labs, stabbed me in the back took my idea cos the guy I was talking to who I later in years now know has I Eric Kristofferson, thank you for stabbing me in the back with no credit. I have said this Dolby EX story so many times.

Usually it is the tech projectionist that come up with some bright ideas, thou no real magic about Dolby EX it could have been used a bit better in cinema and once it got home cinema market in 2000 Dolby labs being the crooks they often are only gave you the consumer a 3 channel EX version not the pro cinema version which was simple to do if you use an outboard matrix decoder like Smart circle surround or the other AVR you stacked away in a loft or cupboard.

Sonic Whole Overhead Surround was used for one movie mixed just for one movie so the re-recording mixer says, and wouldn't have any extra sound mixed onto the stereo surrounds for my Dolby CP45 SA10 decoders to show a strong signal being steered towards surround channel on the CP45 or as it is called on the SA10 "Extra". I was under the impression with Dolby Stereo matrix the Star Wars '77 the signal remains intact and needs a decoder to extract that channel. I was also under the same impression the signal is intact on "we were soldiers" (2002).

I have read that mixes tinkered with idea of doing a matrix overhead for SDDS 8ch? So I have read in pdf file article.
It is very easy to do with mixing an extra signal onto the stereo surrounds one that has forward phase and the other anti-phase that playback as phantom mono while other sound effects can be panned hard left or hard right or even half panned or slowly panned.

So there it is least what I can remember from being there at the cinema to reading tech papers over the years to getting backstabbed by Dolby labs. If I was online at home '98 I would have shared it, so I am sharing the DOG channel idea, you can use it if Atmos excites you or you can carry on using substandard Atmos Overhead surrounds, bottom line is, no need to use auro3d. 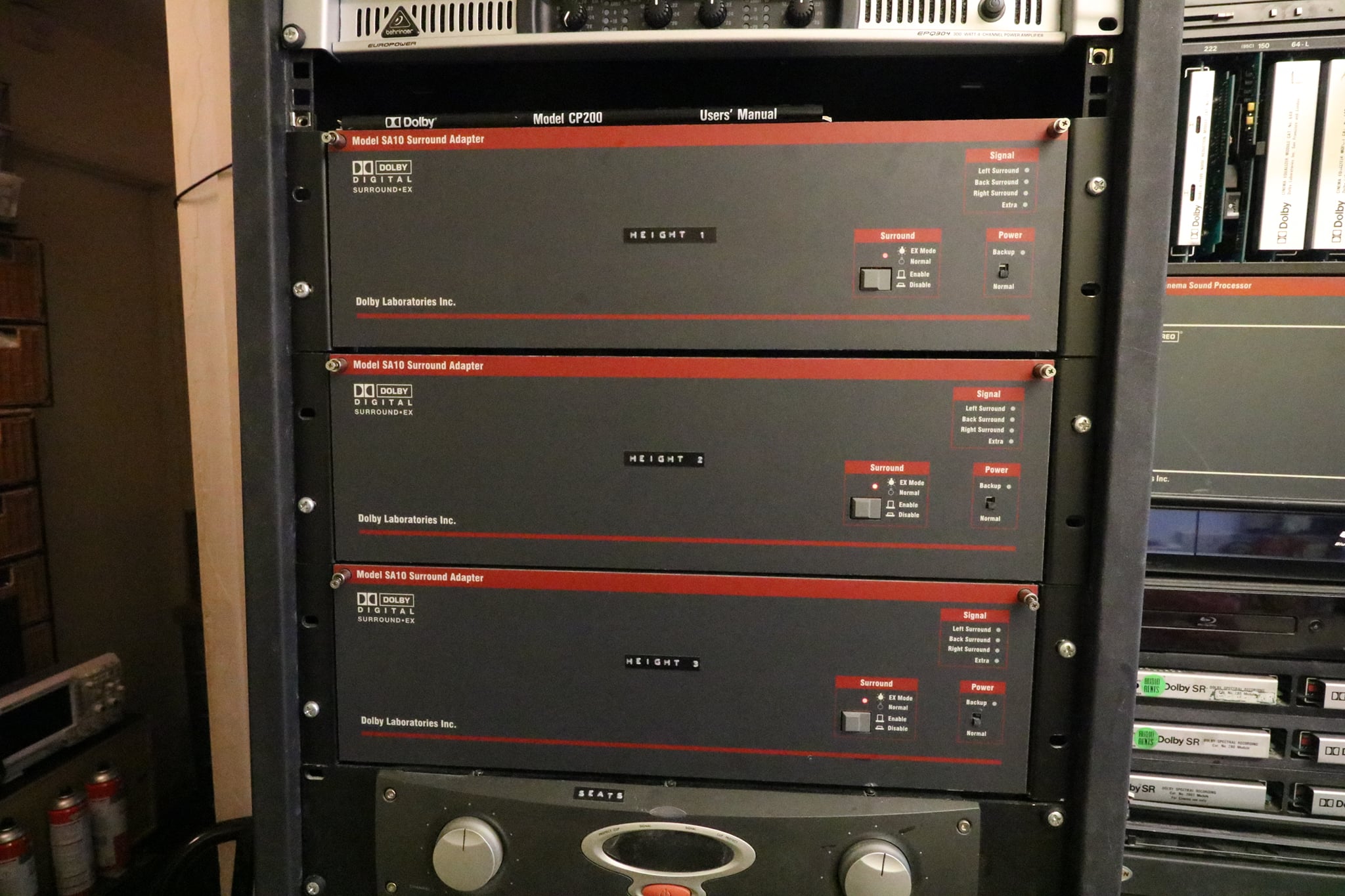 Three matching Dolby SA10 labeled so I know which decoder which. 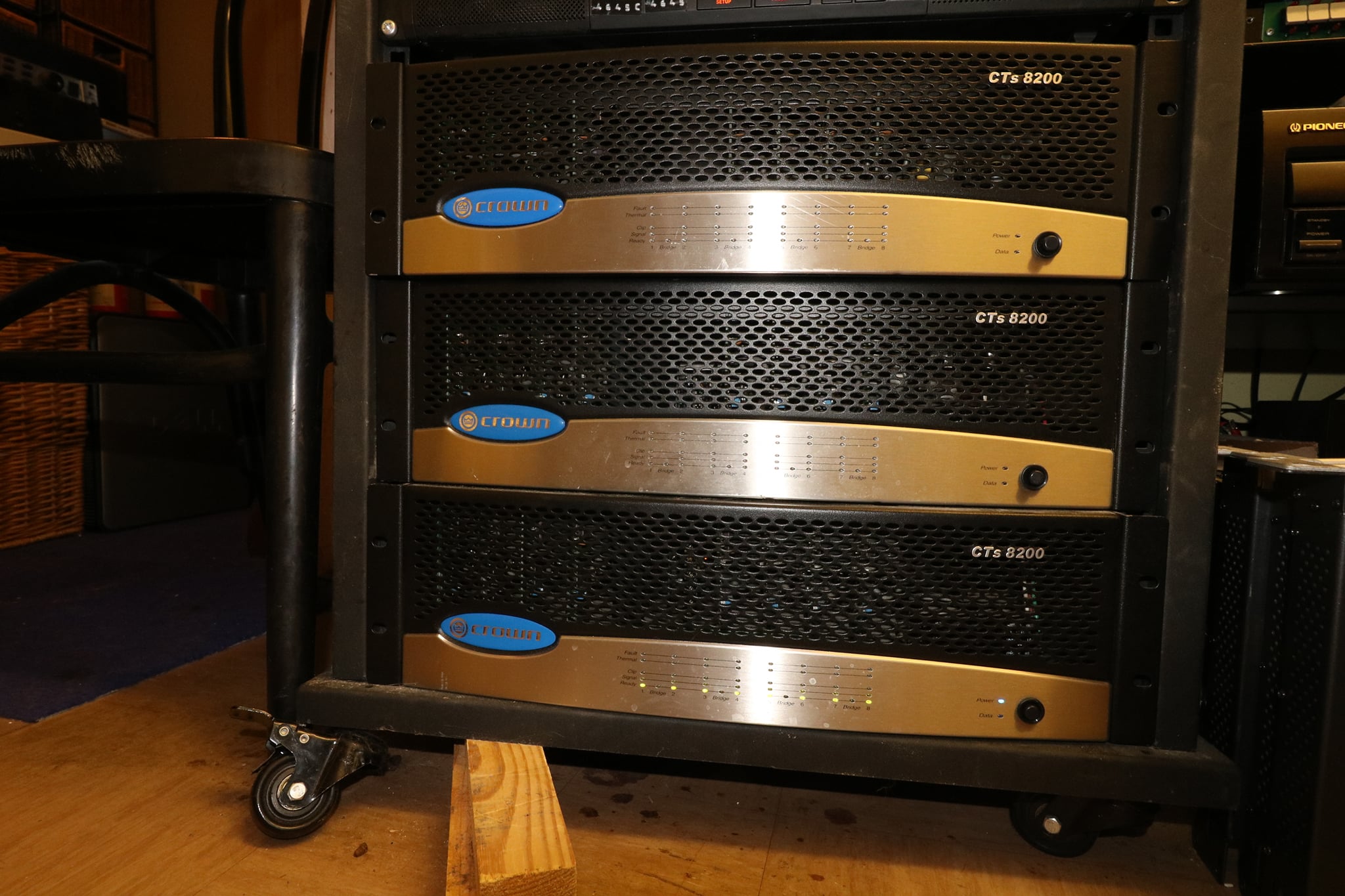 Bottom Crown CTs8200 is used for sidewall surround arrays x3 JBL 8330 mk II per sidewall though channels 1 2 and 3 for (left surround) - channels 4 5 and 6 are for (right surround) channels 7 and 8 are used for back stereo surround.

Overhead surrounds are JBL 8330A lighter weight easy install and they often sell ultra cheap as fish and chips a must Overhead surround or side/back, have. Smaller extra channels JBL control 1. 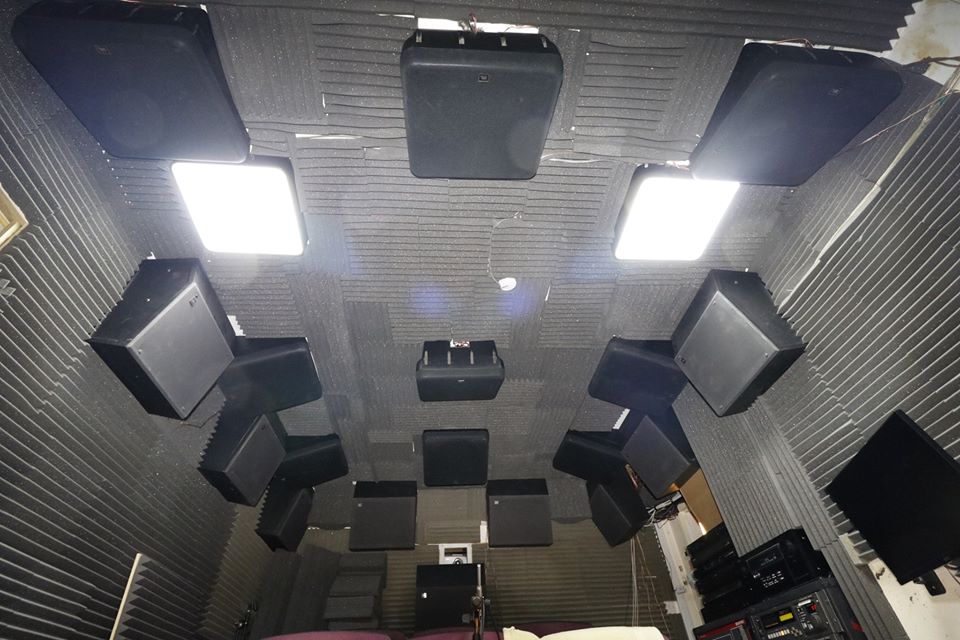 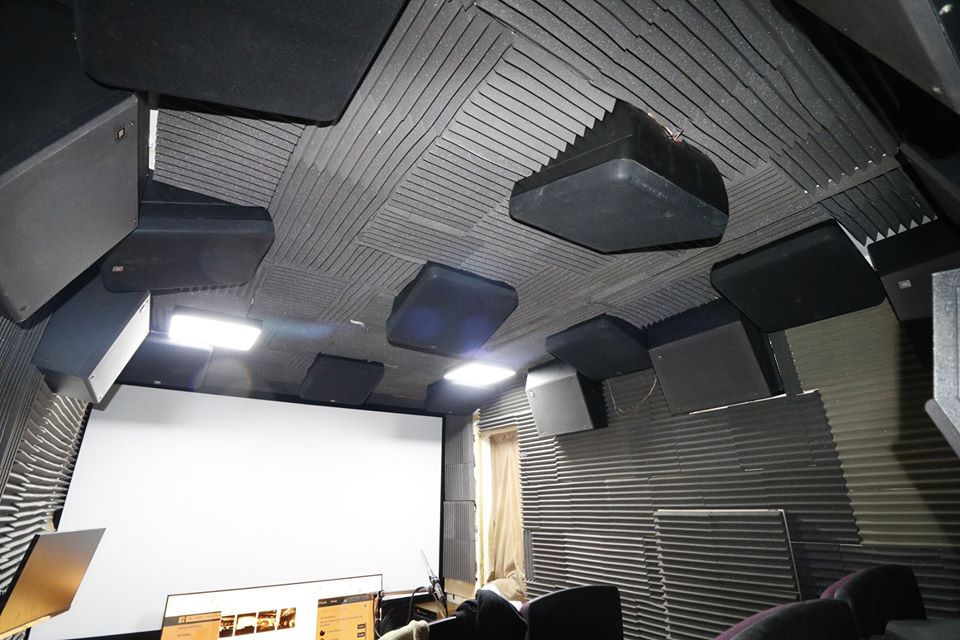 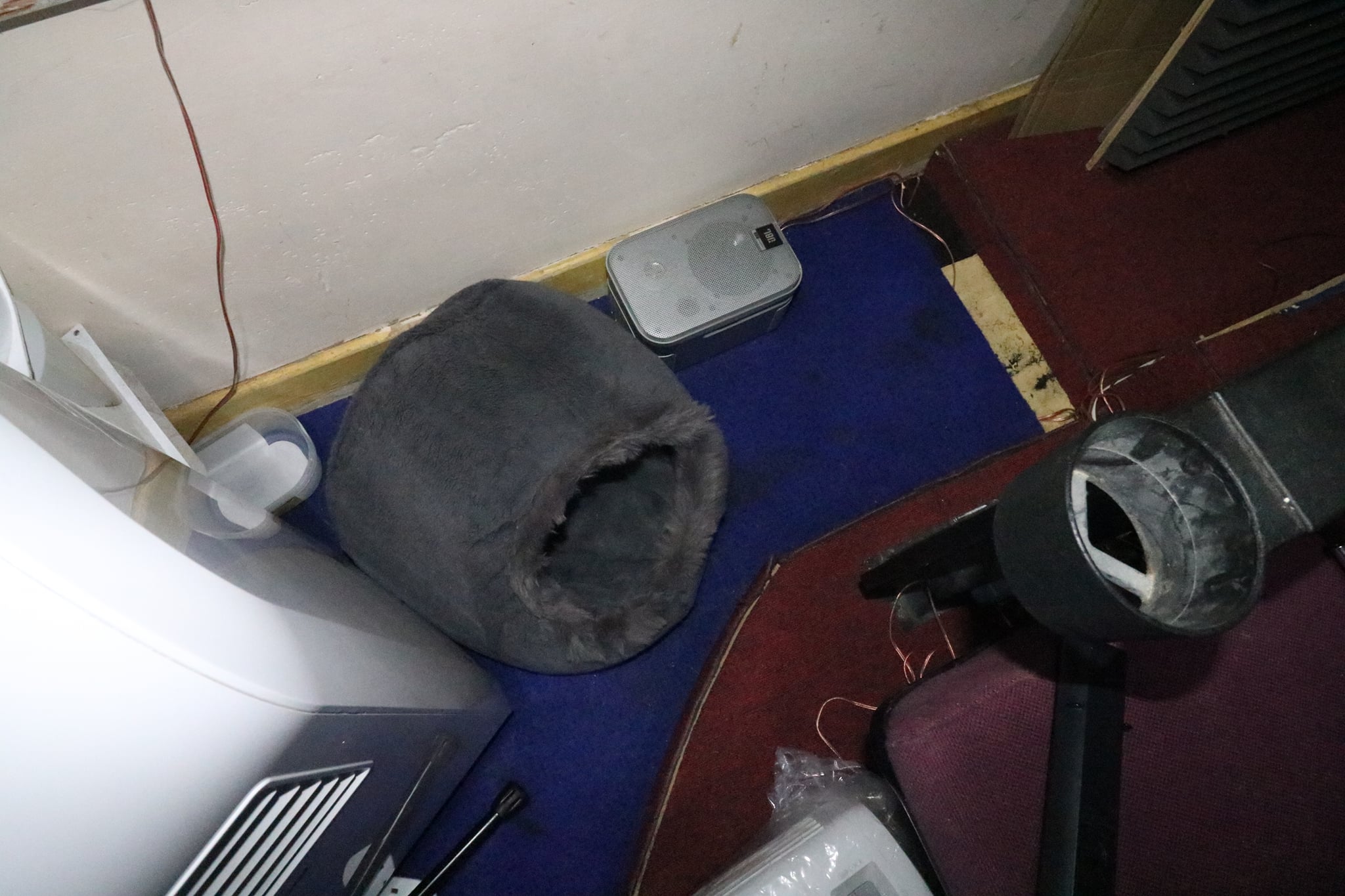 Picture of few of the Extra channels that are on the floor these are Extra 2 they each get a mono signal from the decoder sent to three actually as I use a middle one belong front middle seating to balance out the phantom mono signal. 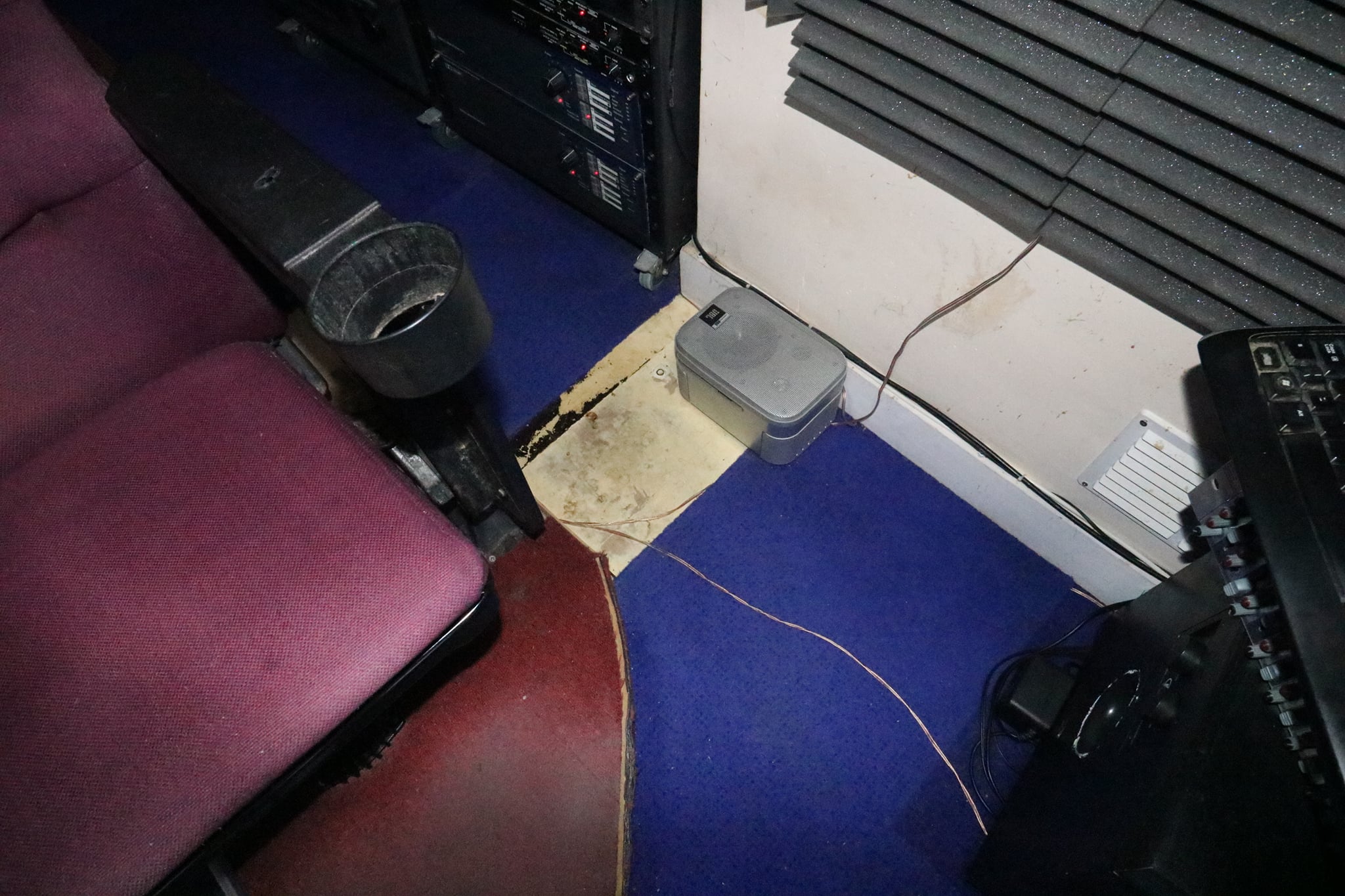 Oh well may as well show the whole lot then. 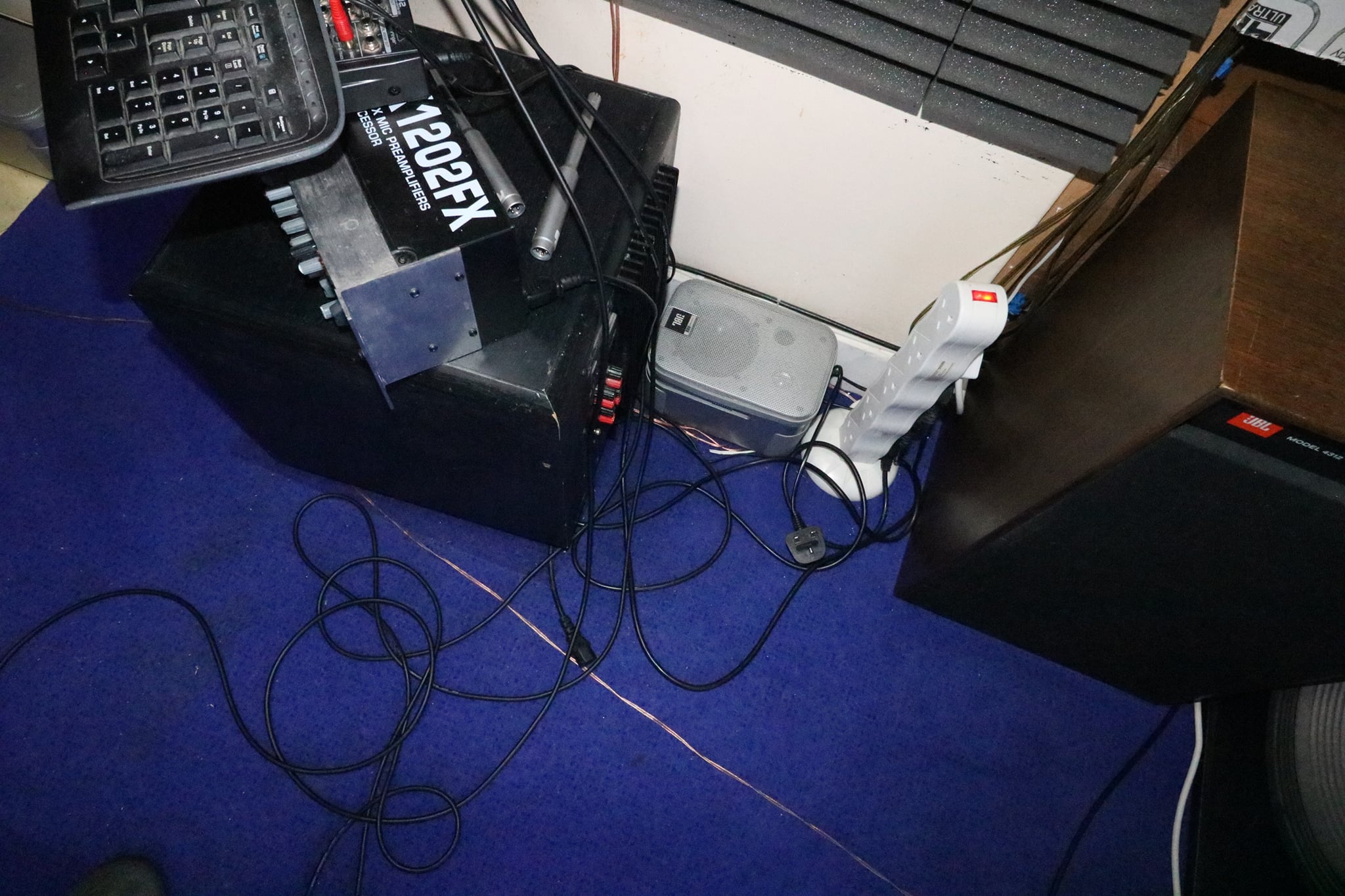 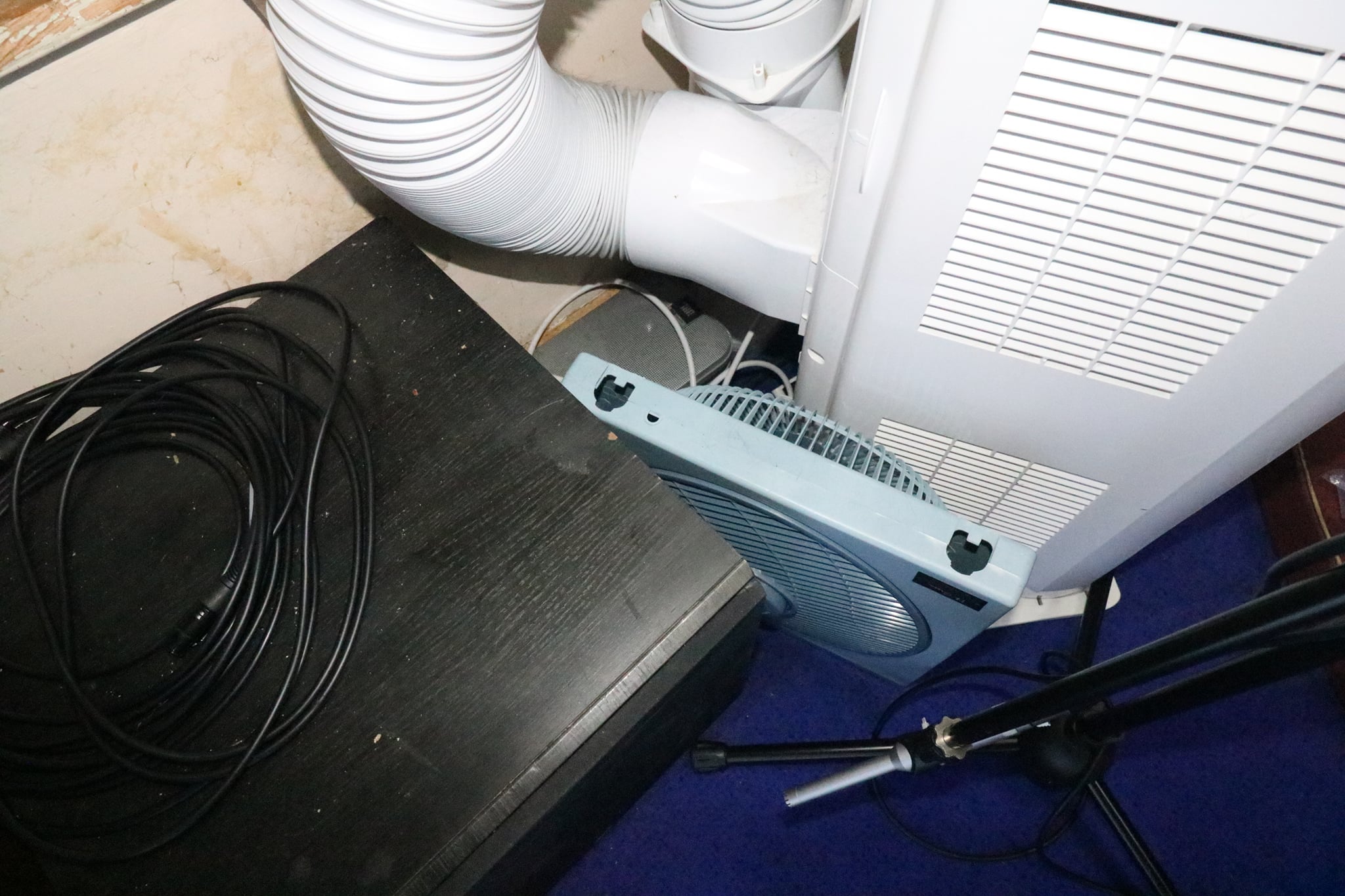 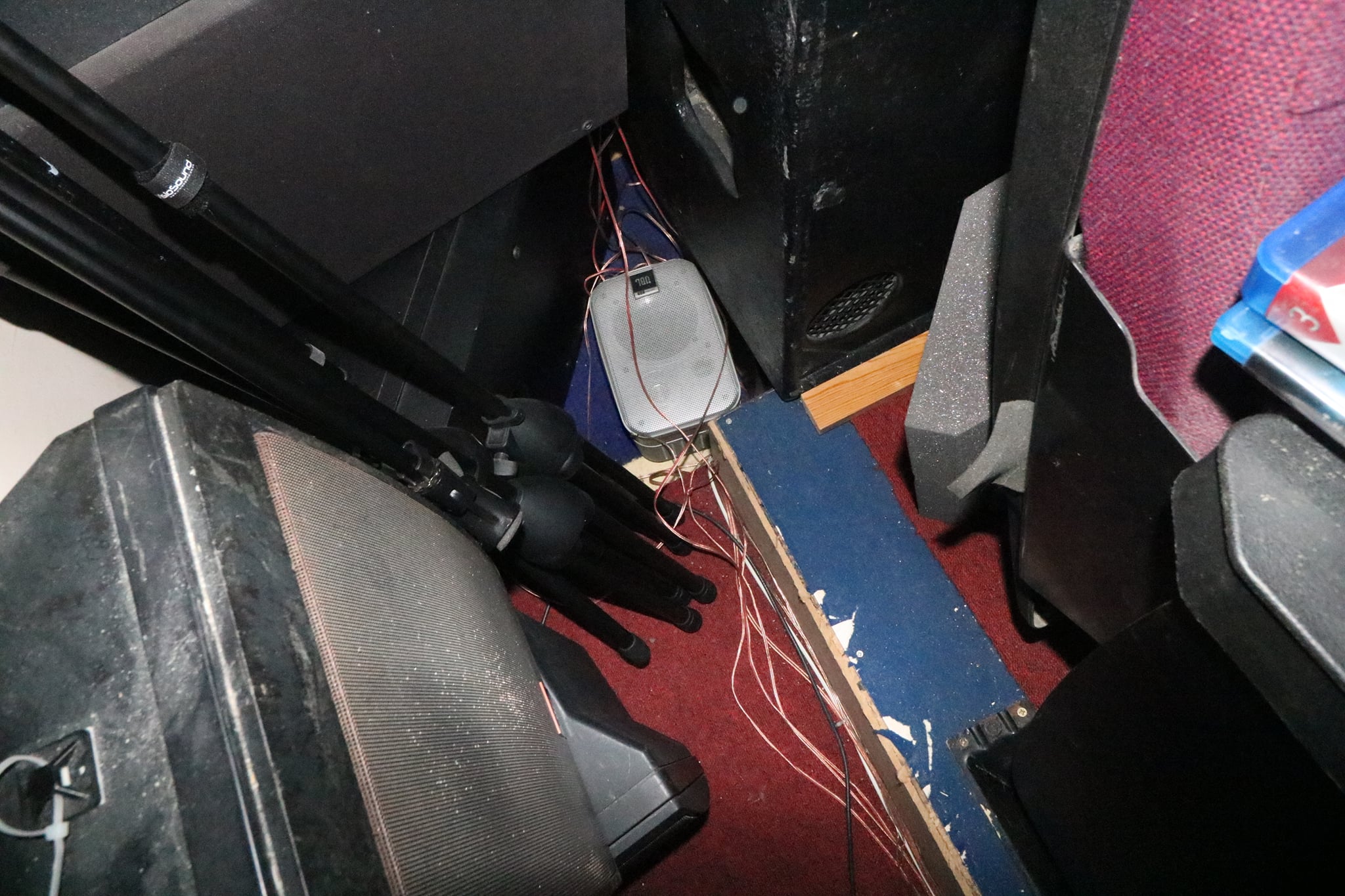 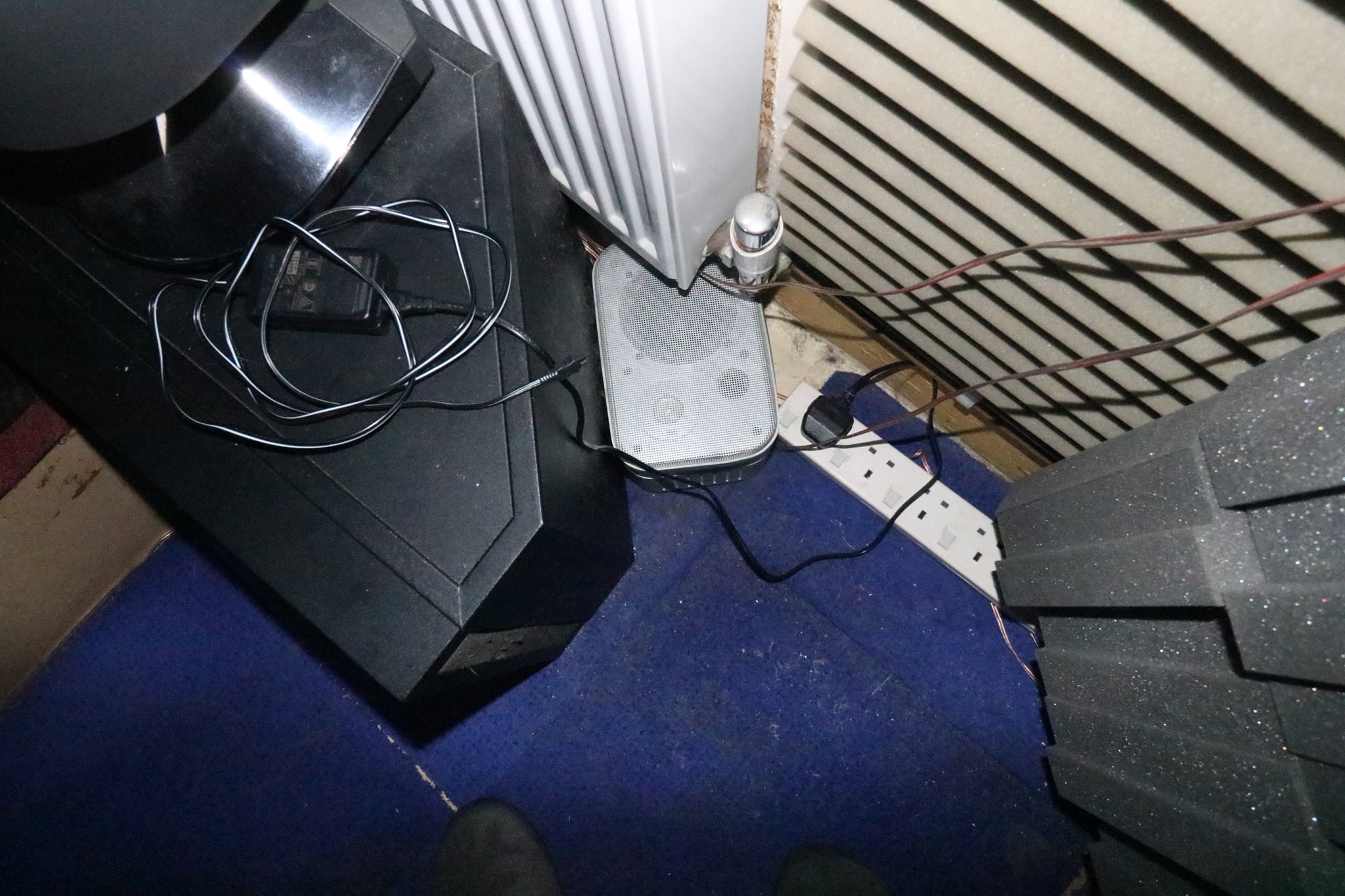 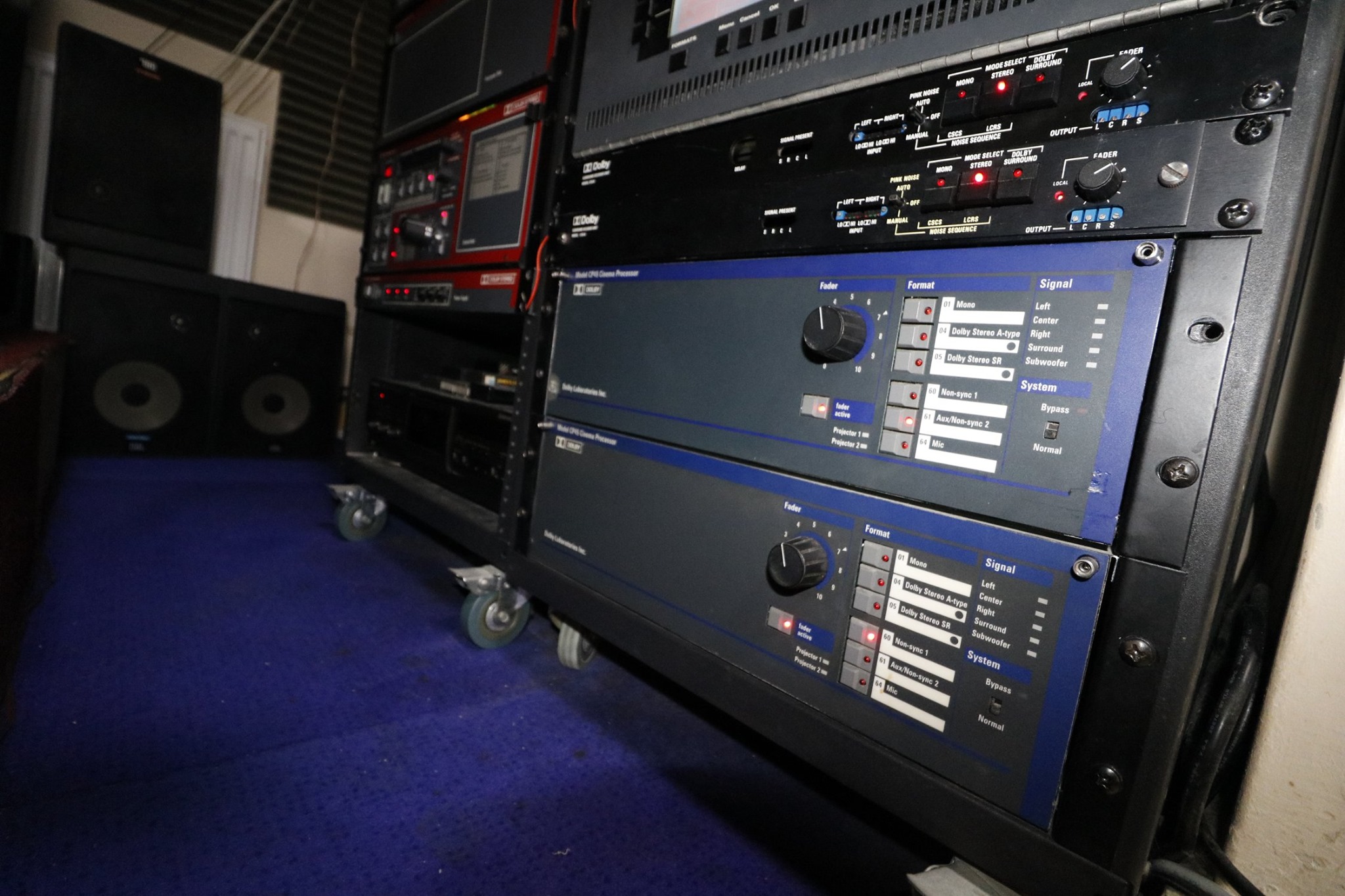 The Dolby CP45 at the bottom of the rack is for my side surrounds level and extra decoding with Below Surround Matrix! That performs rather well.

When Atmos is switched on it decoders away certain sounds from the front , the side surrounds or surrounds and back surrounds, this frees up the sound imaging cos not only does the Below Surround Matrix sound cool when the airplane appears at the front gunner, then flies below my seating Whooosh! As it appears on-screen then passes off-surround at below angle. When the decoding is switched off the sound of the plane (phantom sound) appears on the regular surround channel which doesn't make much sounding XYZ sense to me? Cos in real life I would hear it passing below for brief few seconds and the noise inside the plane would most likely frequency audio mask it, maybe?

For Below Surround decoding all you need is a matrix decoder and use the Centre channel output as its extracting the centre phantom away from the surrounds giving better sense of sound steering movement. I haven't yet connected up the surround output to see where that can possible be used on the ceiling as some extra sort of channel or as an array placed along the sidewalls. it depends on what I am watching and where the sounds are sounding with a scene to see if the continuity makes any sense at all? It's trail and error.