Anyone knows the frequency response of the Stax L300 Limited edition?

Have these ever been measured? EQ response graph please?

https://www.head-fi.org/threads/stax-sr-l300-impressions-thread.813511/page-40
People have a tendency to overestimate their hearing capabilities.
Use your ears to listen to music not as an analyzer.
OP

My reference is the LCD-2. Compared to it, the L300LTD do sound less bassy, but I cannot reconcile that abrupt cliff with what I hear in those cans. I know, subjectivity and so on. But I do have some experience with audio equipment. What I get from the estats doesn't sound like a 10...12 dB / octave filter.

The graph by BenF shows a very large peak at 7...8 kHz. I do not hear that at all. I would hear it if it was real because I'm sensitive to that kind of thing.

I also don't hear such a big difference between the original pads and the L700 pads.

I'll play with the EQ some more. I was trying to slope it up to the left already, but the elbow in my EQ curve was at 50 Hz, and bass seemed hollow. Now I realize why; I'll shove it to the right, near 80 Hz or so.

The measurements were taken on a DIY rig that also showed a HD600 to have a -15dB dip between 10kHz and 20kHz.
Below the HD600 measurement of the same guy.

BenF uses an EAR most likely with stock compensation... it is incorrect.
The one developped by SBAF is much better and looks very much like mine.

I'm testing now with the slope starting at 80 Hz, climbing 10 db / octave to 20 Hz, then flat. It's... boomy.
I'm pretty sure it starts to drop off somewhere, I just need to figure out a reasonable frequency for the "elbow" in the curve, and some slope that's close enough to reality.
80 Hz seems too high.

When you have grown accustomed to Stax sound every bass boost may seem too much.

Are you looking for LCD2 bass amounts and 'grunt' ?
People have a tendency to overestimate their hearing capabilities.
Use your ears to listen to music not as an analyzer.
OP

What I'm really looking for is the truth of the sound that was captured in the studio, or concert hall.

Welcome to the eternal queste !

Speakers would seem to come closest.
Headphones can sound fantastic but are never going to be as 'accurate' as excellent speakers in well conditioned rooms.
IMO they do certain things better than speakers though.

I like to think of headphones are an alternative when speakers are not an option, but not a direct replacement.
People have a tendency to overestimate their hearing capabilities.
Use your ears to listen to music not as an analyzer.

I don't know about L300 LTD but RTINGS just measured the L300 with a dead flat midrange (but literally no sub-bass...) : 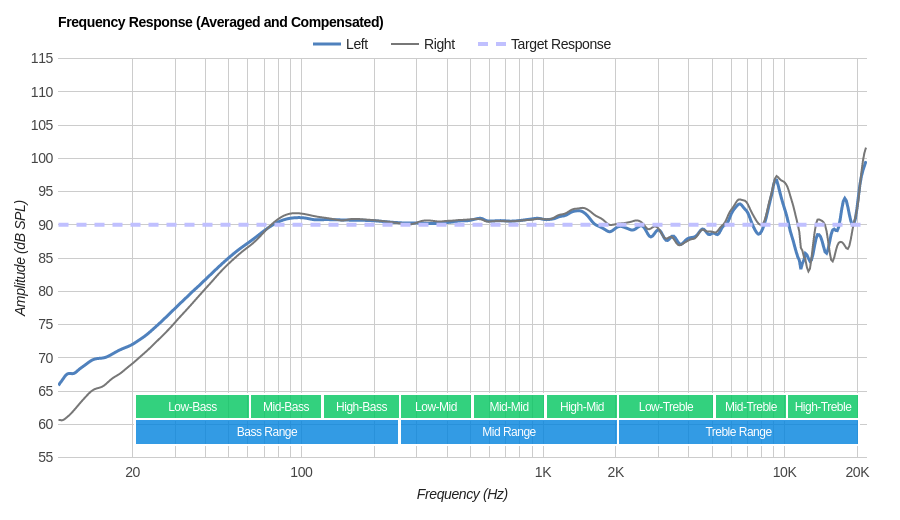 The L300 Limited was recently measured by oratory1990

I don't know about L300 LTD but RTINGS just measured the L300 with a dead flat midrange (but literally no sub-bass...) :

https://www.rtings.com/headphones/reviews/stax/sr-l300
Click to expand...
I heard it that way as well... excellent but a bit boring (considering it is the budget model) and no 'body' to the sound. The drop-off is too severe to EQ alas.
Last edited: Jul 24, 2019
People have a tendency to overestimate their hearing capabilities.
Use your ears to listen to music not as an analyzer.
F

My reservations about the L300:
Needs an energizer, cannot be connected to normal headphone amps.
Bass shy (a bit boring)
Creaky plastic hinges
Comfort not that great
Feels terribly flimsy and cheap (the more expensive ones as well)
Mids and treble ... excellent
Did not hear an obvious 1.2kHz peak but it is a bit 'forward' and 'clear' sounding.
Cable is stiff and heavy.
People have a tendency to overestimate their hearing capabilities.
Use your ears to listen to music not as an analyzer.
J

At the risk of sound shallow something that puts me off these is the low rent feel. Given that they are not cheap to buy they feel like something you would buy for ten quid in Tkmax.
I used to fly, but I go the modern way now, by bus.
OP

Silou said:
The L300 Limited was recently measured by oratory1990
Click to expand...
Yeah, I know, those are my headphones that he measured.

It's around 20 dB worth of correction at a slope of 12 dB / octave, with the intersection between the slope and the horizontal (the point where it starts rising) at 74 Hz (original pads) or in the upper 40s (L700 pads). You may need to tweak the inflection point. I am running this correction now with my L300LTD. It's awesome - Stax detail with LCD bass. That was my goal and I'm satisfied I've accomplished it.

Of course, that means pushing everything else down by 20 dB. Not a problem for the 353X amp, the cans are still plenty loud. oratory1990 has measured distortion at high levels of signal, with the 20 dB bass correction applied, and he said it's very low even in these extreme conditions. Subjectively, I don't hear any distortion - and I'm quite familiar with the sound of overdriven transducers ("thanks to" the many speakers I've blown during the years when I've done circuit design and audio).

That being said - do I wish they were flatter in the bass? Oh hell yes, absolutely. Definitely a case of "make do with what you have". But they are fixable.

The rest of the corrections by oratory1990 - the stuff in the mids and treble: they squash the hump at 1.2 ... 1.3k which was not a good feature - sounds like a 1930s telephone line effect, I clearly hear it when I toggle the filter. The rest of the filters make the cans a bit brighter and more detailed. Seem a bit zingy maybe? I'm still testing and tweaking but it's a good start.

You want results, you gotta do what it takes. I've never heard the same detail and transparency from any non-estat drivers. That's what I want, so I'm putting up with the mess.

Creaky plastic hinges
Comfort not that great
Feels terribly flimsy and cheap (the more expensive ones as well)
Click to expand...
I guess this shows the extent of subjective perception in this field. To me they seem great. Comfort is awesome, I forget I'm wearing them. One person's "flimsy" is the other person's "featherweight". Cable is actually far less annoying than, say, the HD800S cable which is stiff and clumsy like a garden hose (I ended up making my own 800 cable, from a Meze 99 cable and some connectors).

the low rent feel
Click to expand...
Well - more like 1970s scifi design ethos along with an attempt to make them as lightweight as possible, which makes sense given their timbral character.

But yes, they're not impressive-looking in a luxurious context. If optics are important, there are plenty of good-looking headphones out there - the recent Meze planar, some of the Focal cans, some of the ZMF, etc.

For a tech geek like me they are a sort of ironic fashion statement.

Would you mind sharing in which country oratory1990 lives? I might want to sent him one of my headphones.
OP

The location information he has shared publicly is "right in the middle of the European Union".

Silou said:
Would you mind sharing in which country oratory1990 lives? I might want to sent him one of my headphones.
Click to expand...
a hint I think he has worked for AKG before I once sent him IEMs. Friendly guy.

Veri said:
a hint I think he has worked for AKG before I once sent him IEMs. Friendly guy.
Click to expand...
That is actually a good hint I just wanted to know if he lives in the US. If that was the case I would not sent him my stuff because of the high shipping costs.

I got my L300 limiteds yesterday. Couple of questions to you @Florin Andrei

- I assume you bought the L700 pads? Do you recommend them?
- What do you use for eq? I have ADI-2 DAC I could most likely use.
- I have two amps at the moment for testing, the SRM-252S and SRM-353X limited. I have done a couple of tests with both and don't seem to hear any differences in sound. Which one would you recommend? Regarding listening volume, I seem to use the 252S between 9-10 o'clock levels, so that little thing seems to have enough power for me.
Last edited: Jul 28, 2019
You must log in or register to reply here.
Share: Facebook Google+ Reddit Pinterest Tumblr WhatsApp Email Link