Built a Roon Core server this weekend with a NUC8i7BEH and Akasa fanless case. Not an advanced project by any means, but it’s DIY compared to buying a Roon Nucleus, so I thought I’d make a quick post here for those who might be considering it. There are complete video tutorials online for installing the NUC into the Akasa case, and extensive build threads on forums such as here, so I won’t get into details of the build. But see important note about the BIOS update, in the section below on installing the ROCK operating system.
Bottom line: a couple hours will get you the equivalent of a Nucleus+ for less than a third of the cost to buy one pre-built.

Why use a NUC as a server running ROCK instead of a regular PC? ROCK is a Linux variant optimized for running Roon Server and nothing else; it is stable, lightweight and automatically updates itself. I’ve been running it for several months on another machine and haven’t had to reboot yet, or had any other issues. ROCK is designed to run on the Intel NUC series of mini-PCs. Putting the NUC in the Akasa case eliminates the noise of the fan in the factory NUC case.

The setup:
NUC8i7BEH is the most capable NUC currently supported by Roon for running ROCK; see here. A little over $500 on Amazon. I chose this model primarily because I plan to use Roon’s DSP platform to perform room correction for several zones at the same time and wanted plenty of processing power. Here’s the NUC before disassembly. 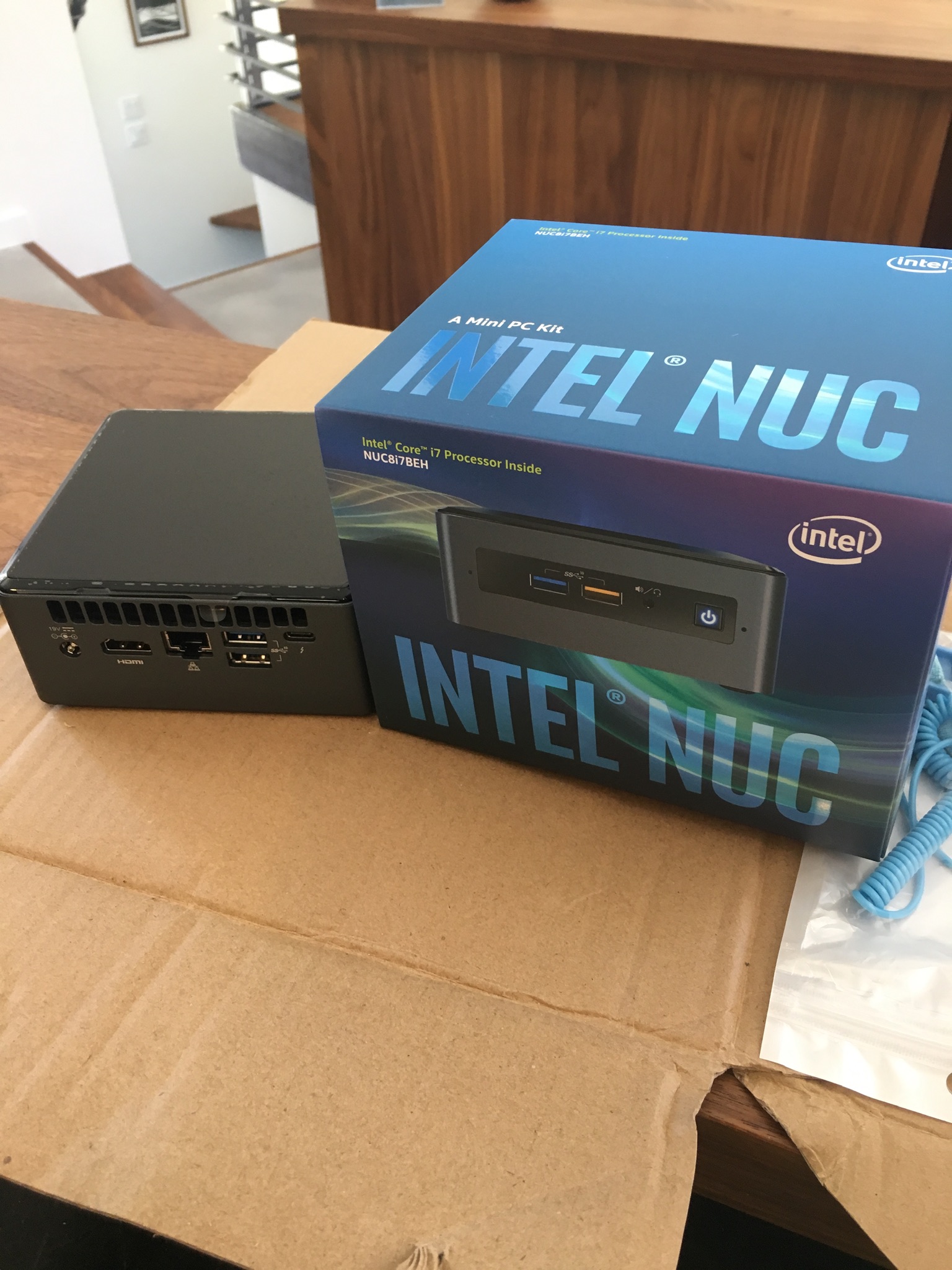 There’s a board-only version, NUC8i7BEB, that you wouldn’t need to disassemble, but it seemed to be hard to find and more expensive than the BEH. Removing the board from the case mostly involved a few screws and detaching some pin connectors.

Here’s the Akasa Turing case made for this NUC, about $130 from Performance PCs: 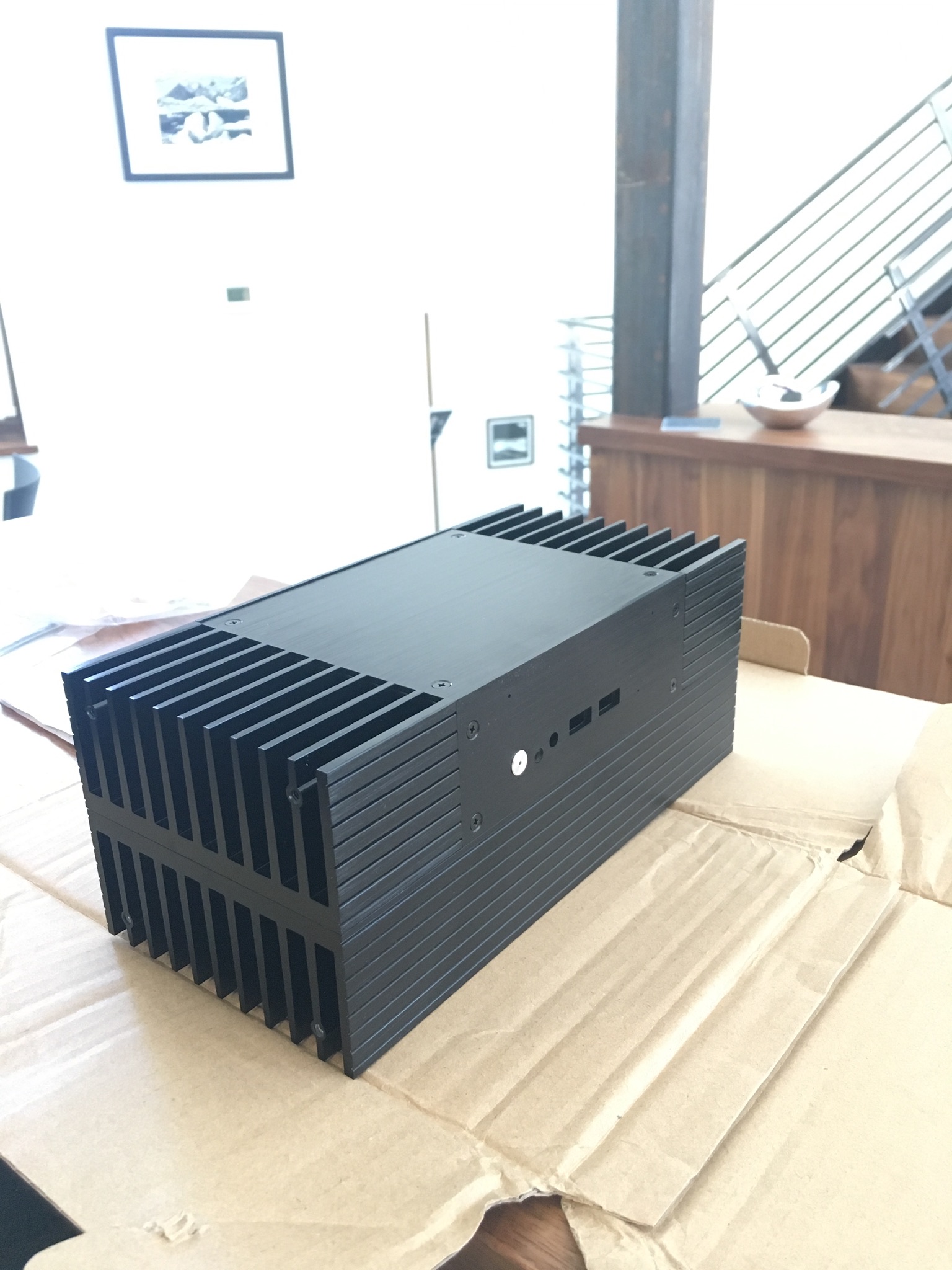 Some folks on the Roon forum seem to hate the appearance, but I think it’s fine and don’t care anyway, as it will be inside a cabinet.

Removing the NUC from its case and installing it in the Akasa fanless case was straightforward and took me about 2 hours, including installing the memory and hard drives. This is the first time I’ve done any electronics work more ambitious than installing new memory or replacing a hard drive in an existing computer. I think you could do it in about 30 minutes if you had the process down. Finished product looks like the empty shell, but with decorative end covers installed: 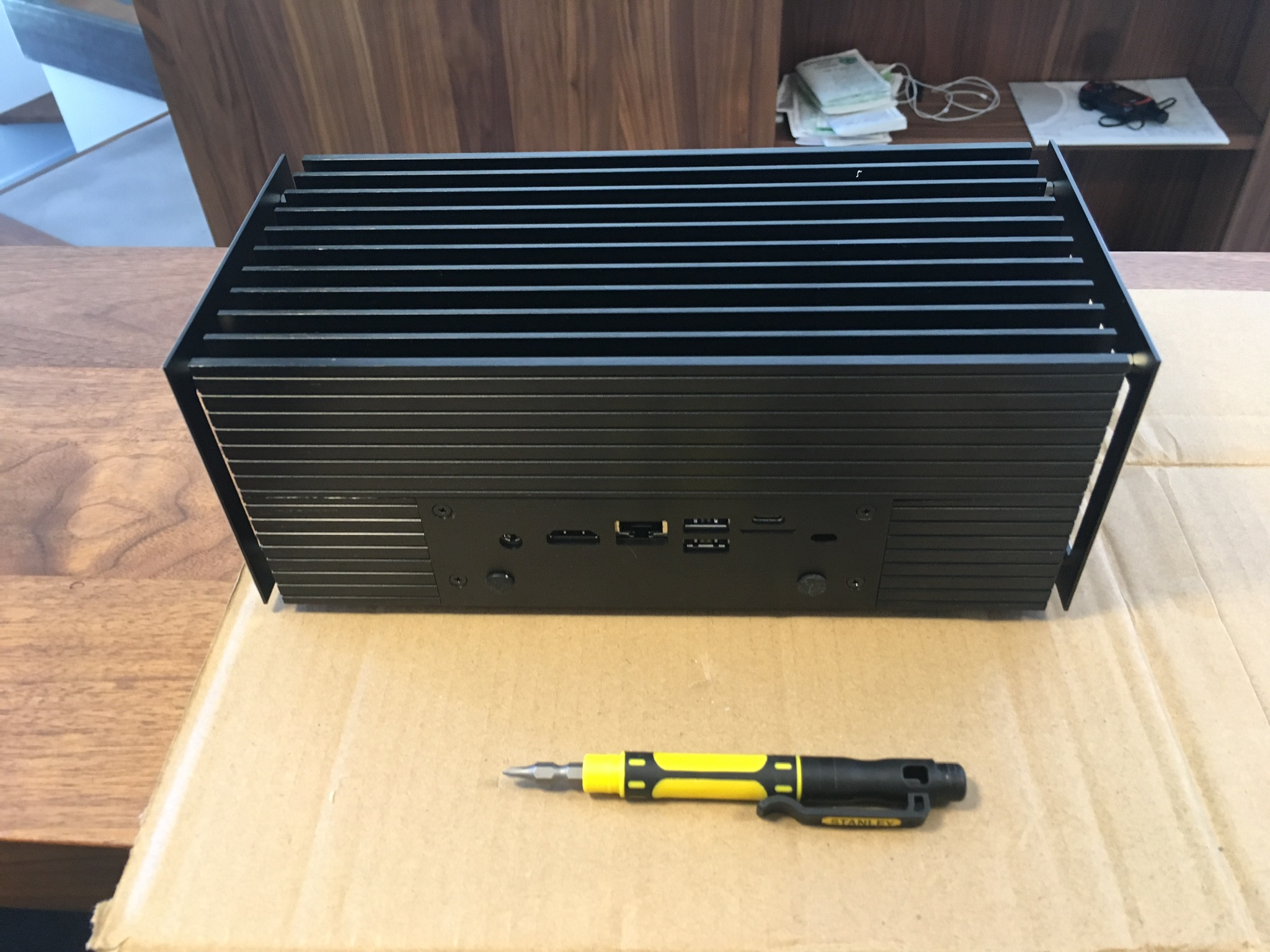 The NUC comes without memory or storage of any kind. I plugged in 8GB of DRAM, a 256 GB M.2 SSD drive for the Rock OS, and a 1TB SSD drive for storing music. Total cost was about $900 including the Akasa case. Nucleus+ goes for about $2500 with no internal music storage installed, but comes pre-built and with ROCK installed, and you can be running Roon within 2 minutes after unboxing it (easy to add an SSD drive yourself, but you do have to open the case).

With the hardware assembled, I installed the Roon ROCK OS as described here.
One important note: When configuring the BIOS on the NUC before installing ROCK, per the instructions here, you won’t be able to set the M.2 drive as the boot volume because there is not yet any OS installed on the drive. The workaround I found is to proceed in the following order:
1. Install BIOS update per Roon’s instructions.
2. Open BIOS utility and restore BIOS settings to default as instructed, but don’t try to change boot settings at this time. Leave the boot settings on UEFI (not Legacy), save your changes, and exit BIOS.
3. Install ROCK to the NUC using USB flash drive, as directed.
4. Now open BIOS utility again and change the boot settings as instructed here. You will see the M.2 drive as a boot option in the Legacy boot settings.
5. Proceed with the rest of the ROCK install (update Codecs, then connect to the ROCK using a Roon remote).

Overall, the ROCK install took me about an hour, mainly to figure out why I couldn’t configure the BIOS to boot from the M.2 drive. Using the process described above, it should be a 15-minute process.

With everything installed and configured, the Core booted right up and was (silently) streaming music to my system in minutes. Note that mine is using Ethernet, which Roon recommends, and I disabled the WiFi card in BIOS. If you wanted to use WiFi for some reason, you might need an external antenna due to the metal case (check Akasa website).

Hope this encourages someone ... post up if you have any specific questions.

Great write-up. Didn't realize people had built fanless cases for NUC. Are there heatpipes and such that you have to install? If so, that is always more complex than just putting a normal PC together.

Found this video which shows the process to be much simpler than my build which used heat pipes:

amirm said:
Is the power supply external?
Click to expand...
Yes, the build uses the external power supply that comes with the NUC. It’s not too large, as you can see in the photo in this review.
OP
E

amirm said:
Found this video which shows the process to be much simpler than my build which used heat pipes:

Click to expand...
Correct - no heat pipes. For those who don’t watch the video: The Akasa case has a heat sink for the CPU. You put some thermal compound (included with Akasa case) on there and you’re done, as far as heat management. The case itself is a passive radiator (all those fins).
Options for fanless cases for the NUC do seem to be limited. Akasa makes another one called the Plato that fits the NUC8i7BEH, and a few other cases for other NUC models. Availability in the U.S. is sparse from what I found online.

Another option is to have the complete machine built into a fanless case for you by someone like QuietPC or Tranquil PC — both in the UK, I believe. QuietPC uses the Akasa case, but I think Tranquil PC has their cases custom made. I guess the cost would be a couple hundred dollars more, plus shipping, based on the QuietPC site, and you still need to install ROCK (though maybe they would do it if you asked). Still much lower cost than the turnkey Nucleus options.
You must log in or register to reply here.
Share: Facebook Google+ Reddit Pinterest Tumblr WhatsApp Email Link