my name is Matija and I am owning a pretty cool Rane MP and XP 2016s Rotary Mixer. I bought it a couple of years ago used, but the Preowner didnt mention there was an Problem with the left XLR Signal. I just keeped the Mixer because the Price was very cheap and i thought to fix it by my self. I thought also, to find the Problem, isnt that difficult.

Why did I thought it isnt difficult? If I power up in the Mixer, the left XLR Signal is dead. But after a while,( maybe because the Parts are heating up a bit? ) I can get the Signal back by hitting the Enclosure at the downside of the Mixer. I need a few trys, maybe some Minutes or just Seconds to get a stable but probably unequal (Volume) Signal. Also, i can manipulate the Signal by Moving the Female Connector around from the Speaker while pluged. Because of this Sympthoms, and because I can get the Signal back by hitting the Enclosure, I thought its not difficult to find the Problem. It could be just a loose Connection or a Ground Problem somewhere? If the Signal is down, its also down on the RCA (where my dB Meter is connected) on the House Outputs. So i leave the Mixer always connected to Power to avoid losing the Signal. But sometimes i just lose the Signal again, even if its pluged to Power, but this is a pretty rare Case. Also, sometimes its buzzing a bit (like in the provided Video) and its easier to get the Signal back if the low Frequencies are loud (Bass).

So, what have i tried so far?
- I switched everything from left to right (like the Speakers and the Cables)
- I opend the Mixer (someone opend the Mixer already cause the screws are a bit used), soldered the XLR connecter from the circuit Board away (measured the connectors)
- Removed a bit of the Painting from the Screw on the Jack J26 which is Pin 4, connected to Ground. 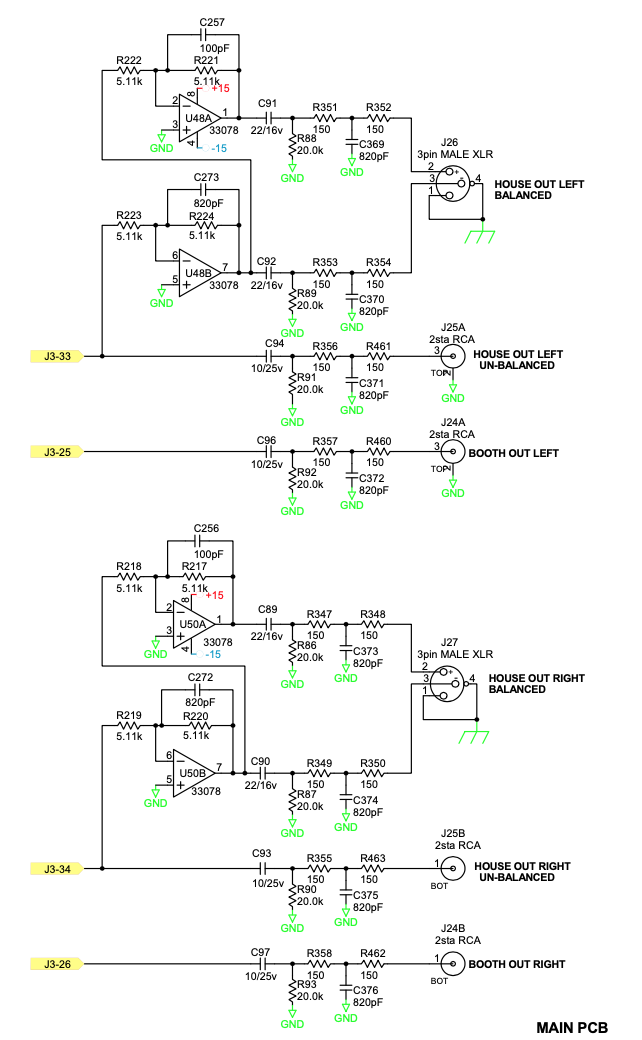 Schematics MP 2016s
Product documentations
Video
I plugged the Mixer back to Power and it was working flawles at the Beginning, but i was suspicious and i moved the XLR cable around and the Signal went dead again after a while. So, again, hitting the Enclosure and Moving the XLR Connector around to get the Signal back. If its back online, dont touch anything anymore ^^.
Im not good into reading schematics but since the RCA and the XLR are going offline simultanious, the Problem should be somewhere else.


So hopefully, you guys can give me an Advice or some Inspiration where to search for the Problem.
Last edited: Aug 23, 2022
OP
M

the 34 pin ribbon cable was the problem
S

I have the same problem.
The signal of the Left XLR Output goes dead after a while.
After knocking gently on the backside around the area of Booth, House and the Effect Loop section the signal comes back.

Any ideas what I should do next / where to look on the PCB? I sent the MP unit to a service center twice and they couldn't find the problem.

Thanks a lot in advance!
S

Gonna get me a new one and test it.
You must log in or register to reply here.

S
Best way to mix/pre-amp four lavalier mics (and how to duplicate the mic's output pre-mixer)?