Newbie looking for a DAC or Mixer with XLR output for PC/DJ with booth and main monitors?

Came across this forum while looking for a DAC with XLR outputs which seems pretty rare. And as I have little clue as if I actually would need something like thism I'm hoping someone could point me towards a solution for my situation...

TL/DR: looking for a ??? with inputs: USB for PC, 2x TRS/XLR for booth and main output of DJ controller, Mic in and a RCA in for other media. All the audio could be split over 2 outputs ideally with XLR for active montors and can be used standalone without PC running.

Currently have Komplete Audio 6, hooked to my PC and 2 JBL active bookshelf speakers. I sometimes use a mic to record voice clips for videos and that's easy with the inputs on the KA6 and audacity. I occasionally DJ with a Pioneer controller, usually to prepare tracks so just use the USB directly into my PC and play the audio via the main output of the KA6, so no cue headphone channel. I know If I want to use the cue headphone I either have to unplug the JBL's from the KA6 and plug them directly into the Pioneer controller OR plug the main output of the Pioneer mixer into the input channels of the KA6. I also have a set of active QSC k10's which I only use when I drive-in DJ as they're too loud for my old space. Recently I rented a big space where I can fully use my setup but ran into some issues trying to come with a solution that requires the least amount of plugging cables, and not sure what to upgrade.

Ideally I want the sound from my PC split between JBL speakers and QSC's which is possible with 1/2 & 3/4 output of the KA6. But here is my first issue, the KA6 only outputs TRS and the QSC's are about 5m/20ft away, so what's the best way to convert the TRS to XLR? I went looking for a DAC with XLR outputs but they seem rare.

Next if I would want to use my JBL as Booth monitors and QSC as main output when DJ'ing, I'd have to hook both outputs from the controller to different inputs in the KA6. But as far as I know there isn't a way to split these inputs between the outputs of the KA6. A DAC blends all inputs into a single stereo output (if I understand correctly) My guess is I need some sort of mixer to achieve this? I know I can hook the speakers directly into my controller but trying to minimize cable hassle.

Finally I want to use the monitors for gaming/watching tv via other devices, so I could use the input 5/6 with RCA on the KA6 but the problem is that the KA6 isn't standalone, so my PC has to be on for this to work, or I have to plug the usb from the KA6 into a power outlet which is a hassle...

So Ideally I'm looking for a ... with inputs for USB for PC, 2x TRS/XLR for booth and main output of DJ controller, Mic in and a RCA in for other media. All the audio could be split over 2 outputs ideally with XLR and can be used standalone without PC running.

Finally I really like the large volume control button of the KA6 as it fits nicely onto my desk, so in a perfect world this would be a small device and not a monster rack. Budget about 300-500, 700 if exceptionally cool and useful

Any ideas? Thank you all very much and enjoy the holidays!

tjalt said:
But here is my first issue, the KA6 only outputs TRS and the QSC's are about 5m/20ft away, so what's the best way to convert the TRS to XLR?
Click to expand...

A cable (duh). Both are electrically equivalent. If the TRS --> XLR(m) cables you can find are too short, no problem, find some ordinary XLR cables to extend them.

So much for the easy part. That's about all I have time for right now though, sorry.
My audio 'blogalike' | Audio DAC and ADC History | Helpful Audio-Related Calculators

Have you looked at IO boxes like the MUTO or Fosgate? 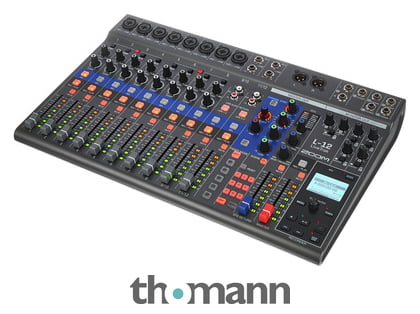 I'm now looking at the Behringer Studio L as that seems to fit most of my needs
You must log in or register to reply here.