I found this post over on the DIY audio forum: https://www.diyaudio.com/community/threads/subwoofer-group-delay.303154/post-4974284
Is he on to something here? I do agree with him about how the cone position relates to the air pressure. If a condenser mic. is recording maximum voltage at peak air pressure, and the cone reaches maximum excursion at peak voltage, then the sound recreated by the speaker will be 90 degrees out of phase even though the cone is moving perfectly in sync. with the amplifier signal. This would suggest on playback we should use a 90 degree all pass phase adjust, and kind of makes a mockery of those who worry about absolute polarity of a recording. Am I missing something here?
Acoustic Sciences Corporation - Maker of the ASC TubeTrap

That makes me wonder how a microphone in front of the speaker playing music does a good job of matching the electrical wave from which the sound was played.

RayDunzl said:
That makes me wonder how a microphone in front of the speaker playing music does a good job of matching the electrical wave from which the sound was played.

Or am I remembering incrorrectly, not having measured anything today?
Click to expand...

I was wondering that too. Does REW or other software already take this into account? A condenser microphone should record a phase shift of 90 degrees across the audio band compared to the generated signal if this is true. I think a ribbon mic. would not, but nobody uses those for measurements as far as I know. I tried a 90 degree phase adjust using my Behringer crossover. The group delay measured in REW didn't look much different. If the group delay is inherent it would only be 12.5 ms at 20Hz, which is not audible from what I understand. I've got more like 30ms at 20hz, although that varies depending on how close I am to the speaker when I measure. I'm pondering trying DIRAC or some other phase adjustable FIR digital filtering just to see what it does. Is it really that much better than if I just work with the parametric EQ until everything looks flat in REW?
Last edited: Apr 21, 2022
Acoustic Sciences Corporation - Maker of the ASC TubeTrap

Phase isn't a big deal except when it's relative to something. If you reverse the polarity to one speaker the sound waves will be out-of-phase (relative to each other) and the bass will mostly cancel-out. The higher frequencies (shorter wavelengths) combine in "weird ways" and you get a "spacey" "phasing" sound. If you reverse the connections to both speakers everything is cool again.

And there's a delay through the air. I don't know if this relates to "group delay" but with high-frequency test-tones, you can hear the left & right (and reflected) waves going in-and-out of phase (canceling and reinforcing) as you move your head slightly, and the waves hitting one ear can be in-phase and out-of-phase at the other ear. This isn't usually noticeable with music but it's very-obvious with high-frequency test-tones.

and kind of makes a mockery of those who worry about absolute polarity of a recording. Am I missing something here?
Click to expand...

I read about someone doing research on this and they concluded released recordings are random with about half maintaining original polarity and half inverting. Or maybe it was half of the studios.

I wouldn't be surprised if half of home-equipment inverts the polarity. I've built inverting amplifiers because sometimes it's just "easier". A single basic transistor or MOSFET stage is inverting so normally you need an even-number of amplification-stages to maintain phase. I think this is the case with vacuum tubes too but I don't remember. With op-amps you can make an inverting or non-inverting amplifier but there are times (maybe with filters) when an inverting circuit is more appropriate, so you'd have to add another inverting-buffer stage to maintain polarity.

Peak pressure occurs at max or peak power. Mic or speaker.
It only occurs at peak V if phase is 0.

Otherwise (assuming a sine wave basis and lagging power factor) at 90 deg + load phase/2.
The point where V and I intersect.

Sorry, I know people don't like pics of my scribble but it easier to grasp some times.
My example 45 deg load. 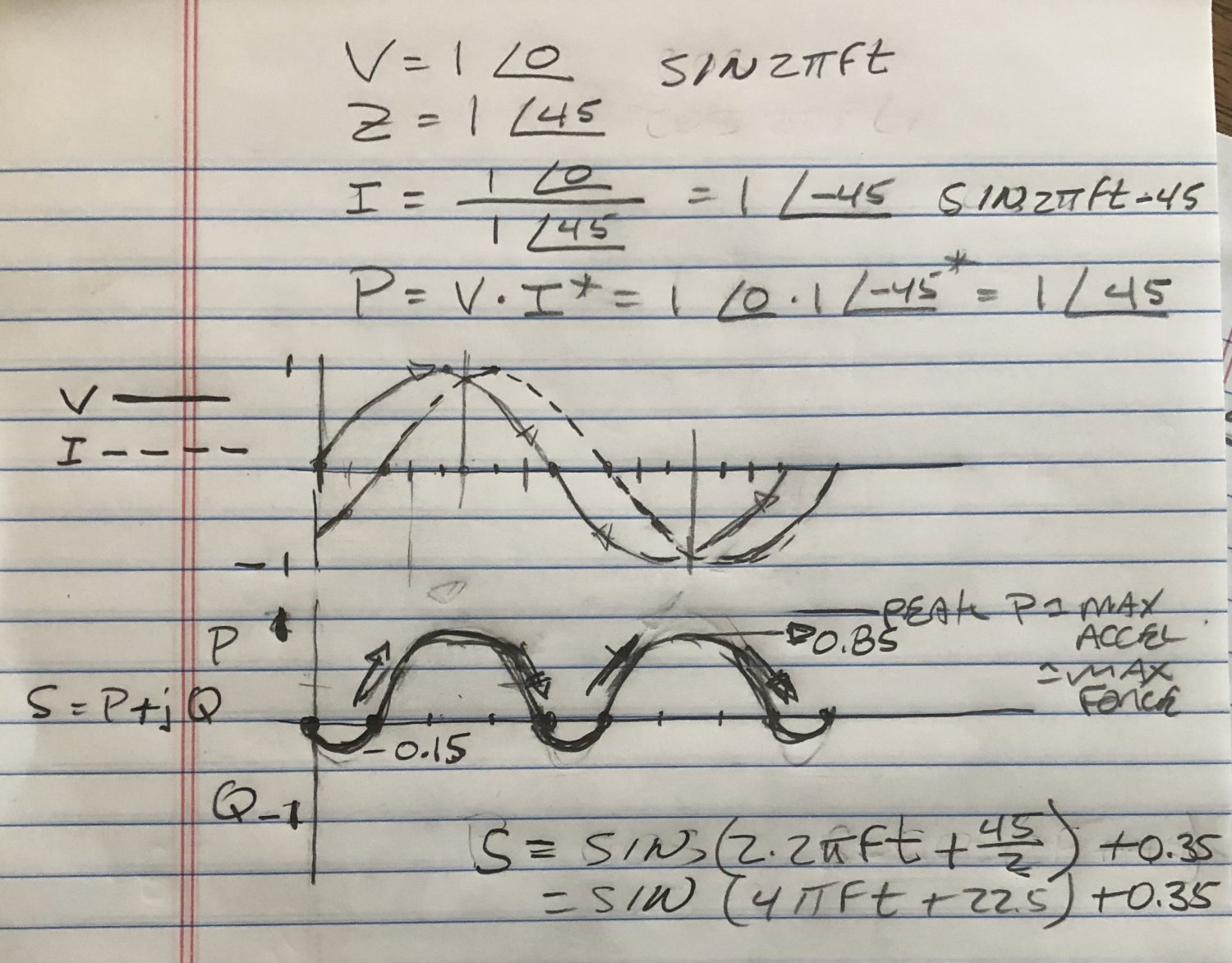 "11. The phase of a condenser's signal is different from that of a dynamic (true)

In general, there is a 90° difference between the signals from a condenser and a dynamic microphone. Hence impulse responses are not directly comparable."

A condenser (or capacitor) mic uses a variable C (one plate is flexible and modulated/moved by sound/air pressure).
A capacitor is inherently 90 deg out of phase V lags I.