Following my measurements on Hypex NC400 modules, I was curious if permanent output residuals of class D switching frequency, which I measured 943mVpp at 446kHz, would have any effect on measurable tweeter distortion. Especially taking into account that level of useful audio signal during listening at moderate or low volume would be well below the HF switching frequency residual.

So I prepared a test, where the power amp is driven from a sum of two signals, one comes from the sound card in audio band, the second one from sine generator GAG-810. The level of HF signal was set to get about 960mVpp/440kHz at power amplifier output, and audio signal level was set to get 220mVpp in 1st round and 440mVpp in the 2nd round of tests. The 440kHz HF frequency was switched on and off and measurements taken in both cases. The output was sent to Beyma T2030 tweeter and measured by Behringer ECM8000 microphone, in near field.

As I have the setup still connected, please feel free to tell me your suggestions what more you would like to measure re this topic, if you have any. 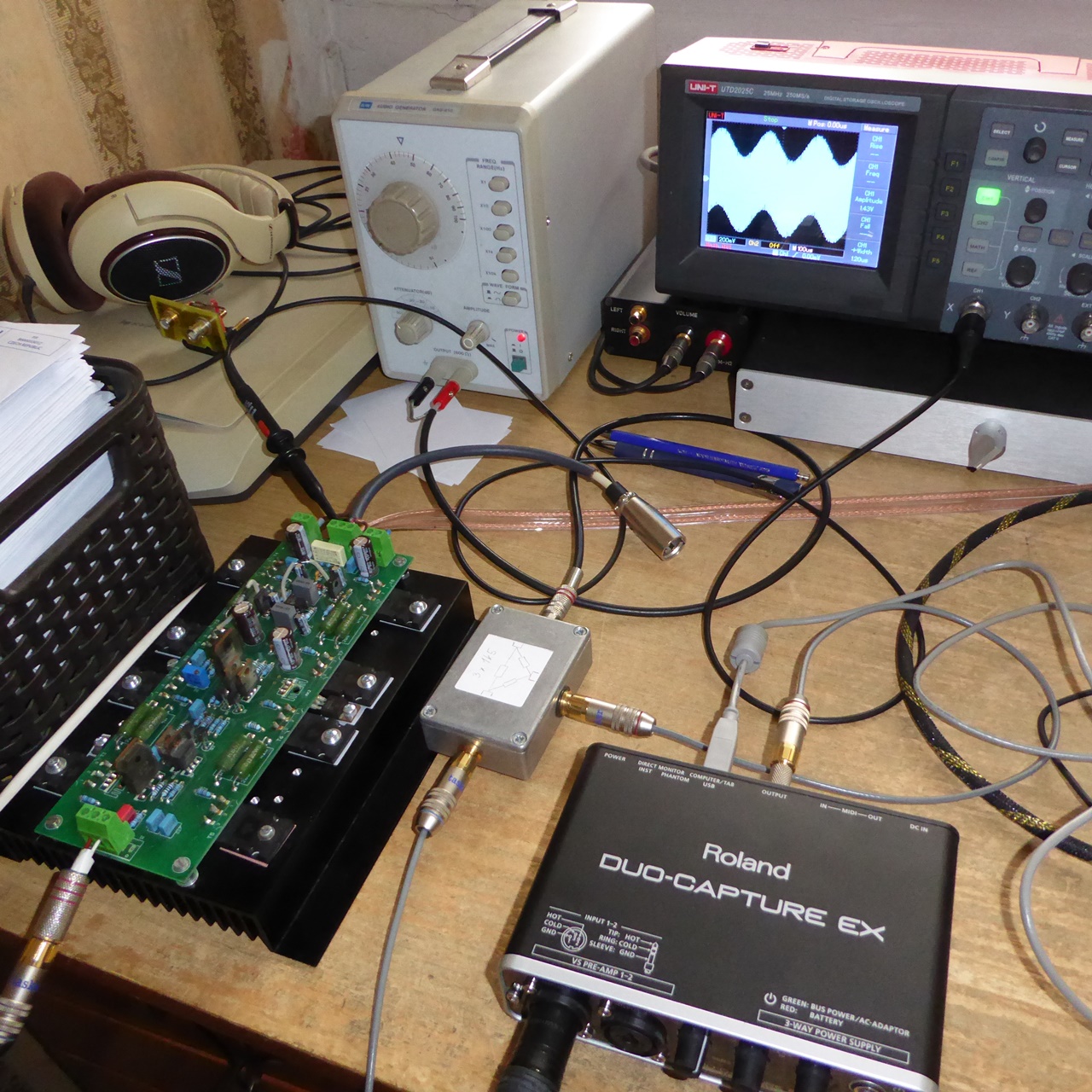 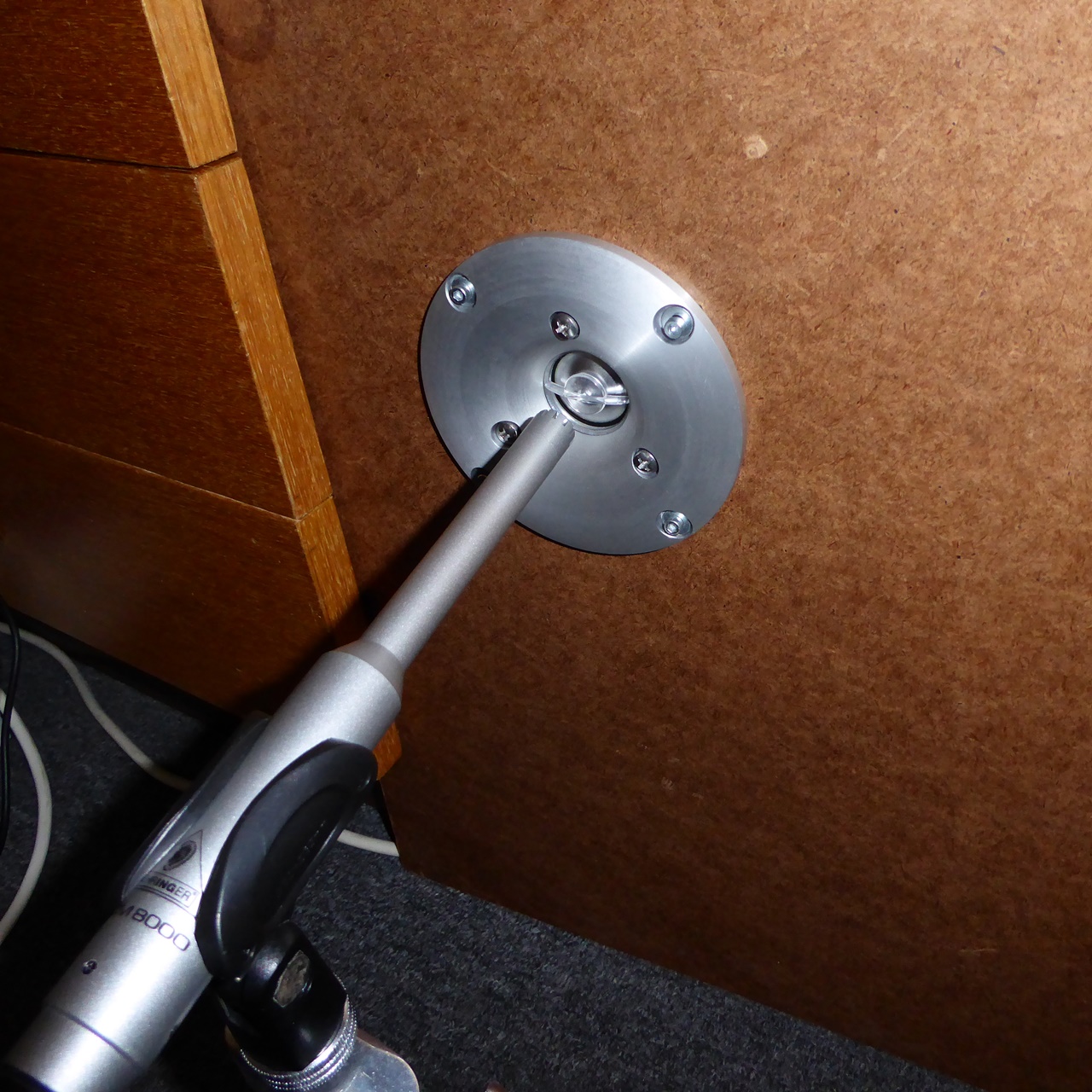 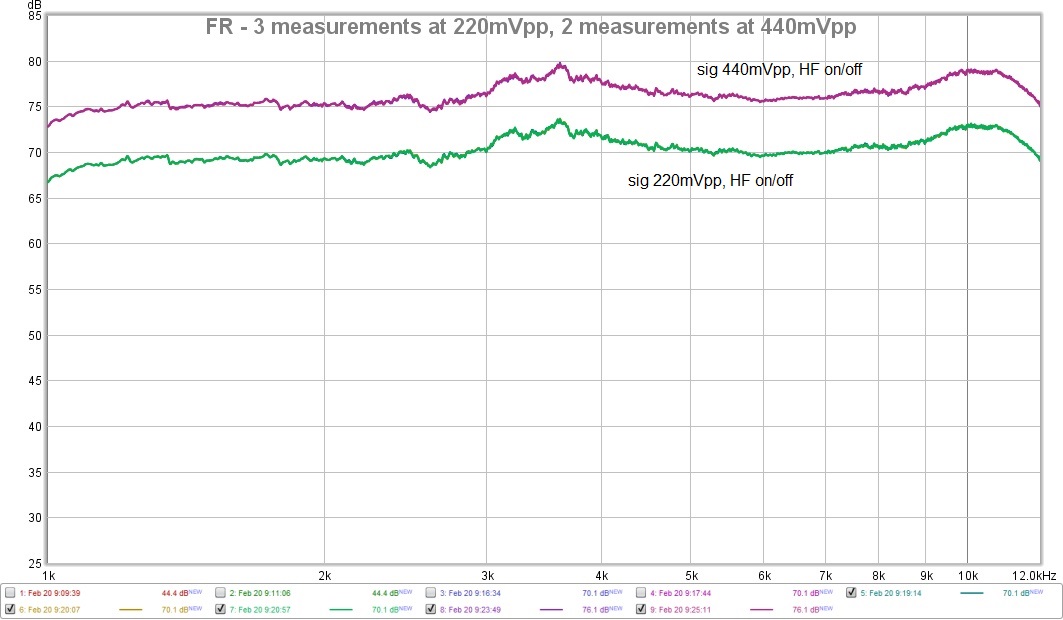 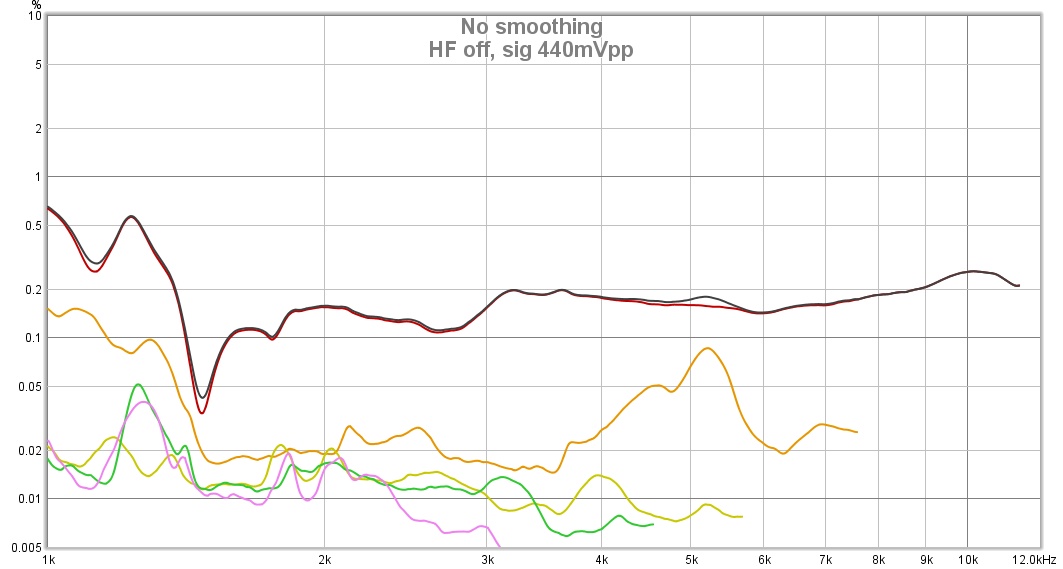 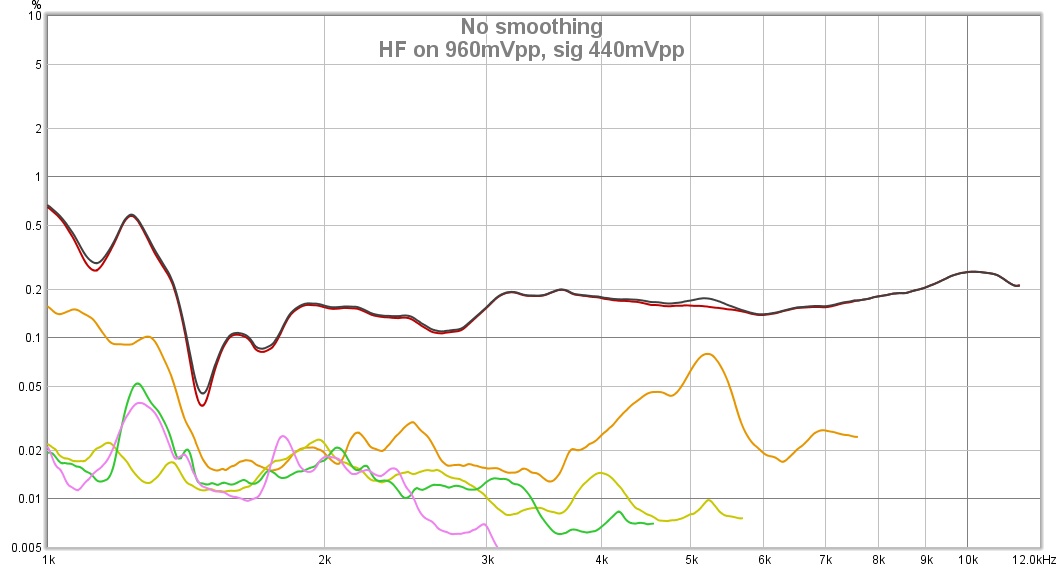 How much do you have to lower the frequency before it shows up? Some class D use much lower frequencies.

Soniclife said:
How much do you have to lower the frequency before it shows up? Some class D use much lower frequencies.
Click to expand...
This is a great suggestion.

Soniclife said:
How much do you have to lower the frequency before it shows up? Some class D use much lower frequencies.
Click to expand...
This is a good question, thank you for that. I made a new set of measurements with HF frequency from 200kHz decreasing down to 30kHz. Please see it below. Though higher frequencies seem to change H3 a bit, but leaving overall THD unaffected, 30kHz and 40kHz show clear intermodulations with the audio sine sweep. This is a new set of measurements and my microphone has moved a bit from #1 post, so please the 1st plot in this post (HF = off) as a reference (repeatable - tested). 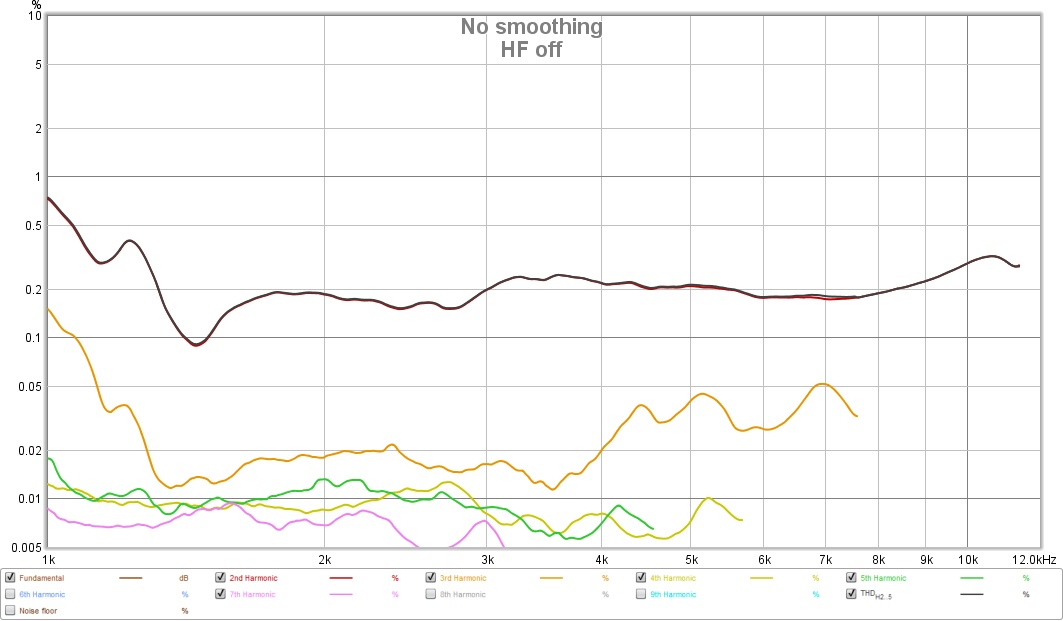 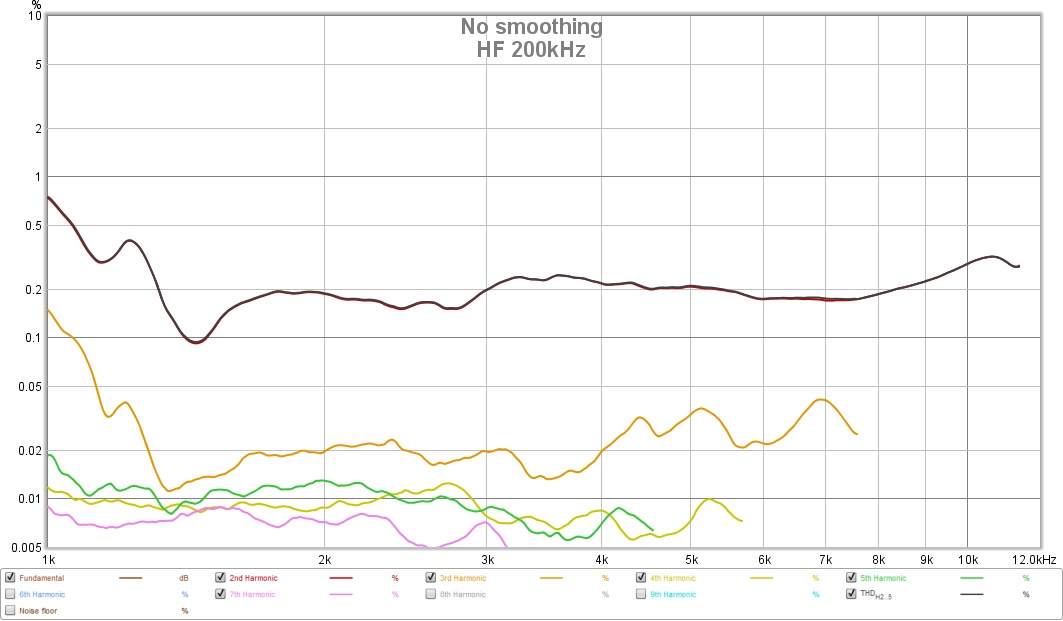 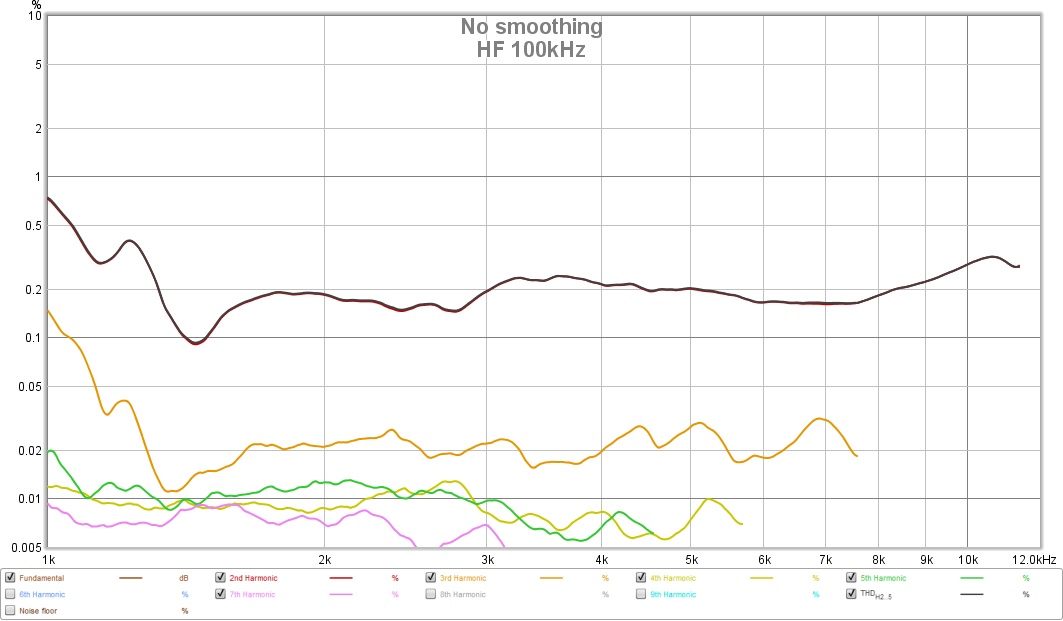 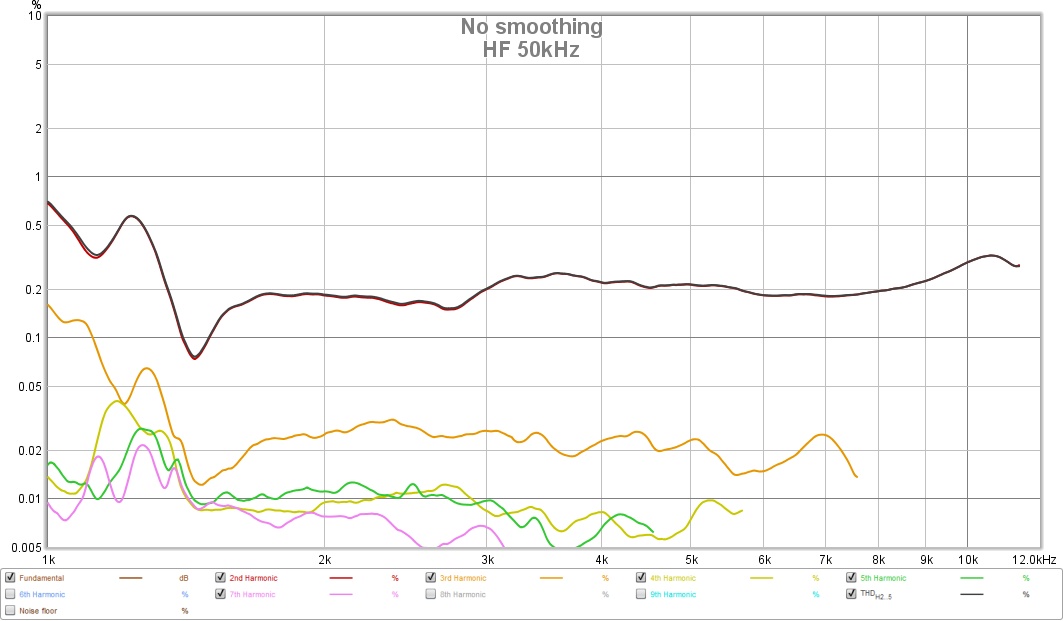 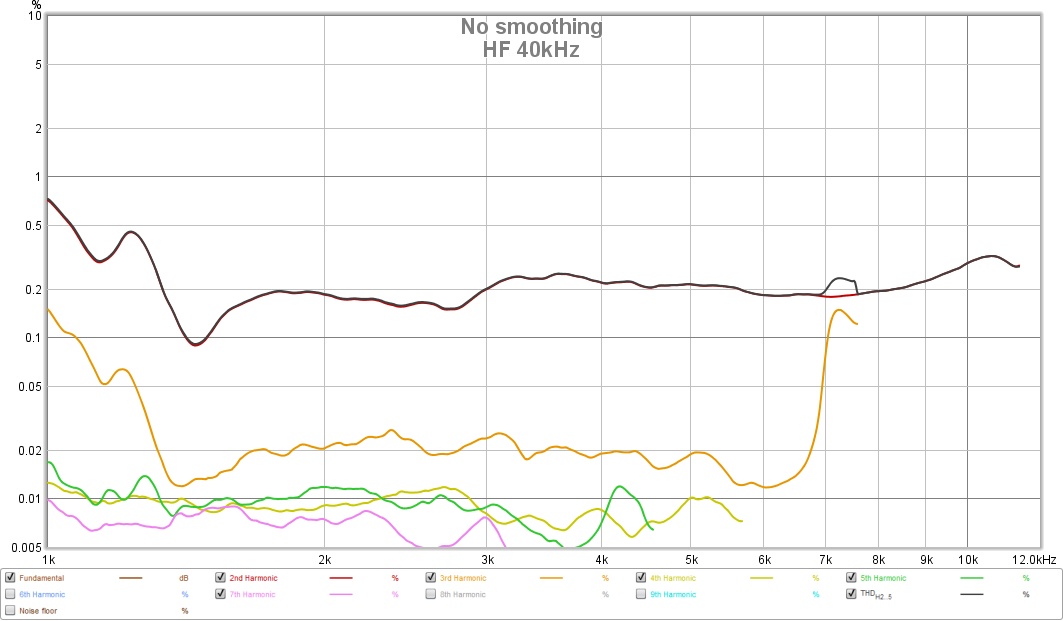 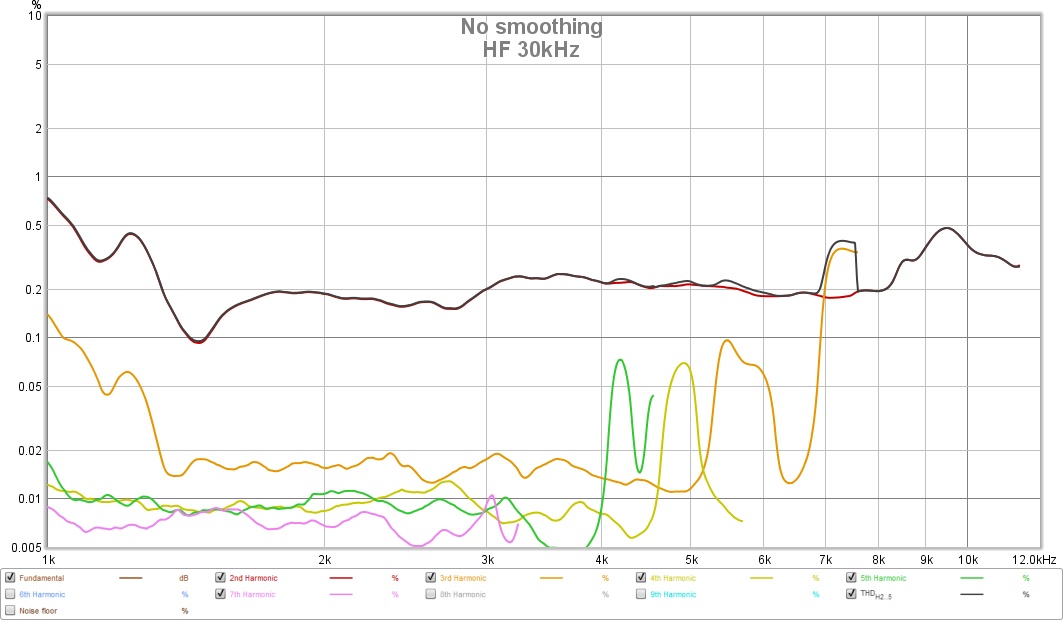 Weird how the 3rd harmonic drops lower as the frequency lowers, before it all goes wrong.

Soniclife said:
Weird how the 3rd harmonic drops lower as the frequency lowers, before it all goes wrong.

So simple conclusion, good class D good, bad class D bad.
Click to expand...
Yeah it is interesting, with the H3 "smoothing". The amp output voltage distortion remains unchanged with HF injection (I checked it for all frequencies used), so it seems something is happening in the driver when additional HF power is added, and it seems to linearize symmetrical distortion. However at inaudible level. Maybe some speaker/driver expert might help us with an answer?
pmacura.cz/audiopage.html

The H2 distortion is (with an almost 100% certainty) caused by the used condenser microphone.
People have a tendency to overestimate their hearing capabilities.
Use your ears to listen to music not as an analyzer.

solderdude said:
The H2 distortion is (with an almost 100% certainty) caused by the used condenser microphone.
Click to expand...
This is highly questionable. Vout(rms) is only 150mV, SPL on acoustical side is low even in the proximity and I have the microphone measured to have distortion of -70dB and better at that low SPL. Another check is to go more distant, at the expense of higher noise, so the higher harmonics become unmeasurable. The setup chosen is quite optimal and distortion is that of the tweeter. As a conclusion, I do not agree with your statement.
pmacura.cz/audiopage.html

Again, my thanks for you showing test setups in detail so that they can be replicated and/or critiqued.

I wouldn't necessarily discount the mike as a source of the 2nd, especially with the nearfield placement. It's a significant mechanical perturbation to the acoustic area. I use a smaller diameter (1/8") mike there, but that might even be insufficient- how do you see the 2HD vary with mike distance?
We find that whole communities suddenly fix their minds upon one object, and go mad in its pursuit; that millions of people become simultaneously impressed with one delusion, and run after it, till their attention is caught by some new folly more captivating than the first. - Charles Mackay
M

pma said:
[...] it seems something is happening in the driver when additional HF power is added, and it seems to linearize symmetrical distortion. However at inaudible level. Maybe some speaker/driver expert might help us with an answer?
Click to expand...
I'm not an "expert", but my hunch would be that the increased linearity has something to do with biasing the magnetic core (as is done intentionally with the ultrasonic bias on magnetic audio tape). Magnetic materials can be terribly non-linear and, although in a speaker, they are present in the form of a permanent magnet, the material is still within the magnetic circuit of the voice coil.

Interesting tests though. I think the real problems occur when the sum & difference intermodulation tones approach audio frequencies - as in the early class D amps & switching power supplies which ran at frequencies only just above audibility.

Hmm. If one want to dig out distortion, get a proper piston type. You can get one pretty cheap from China. Less than 200 bucks. Without calibration tho.
You must log in or register to reply here.
Share: Facebook Google+ Reddit Pinterest Tumblr WhatsApp Email Link