I plugged my little SMSL DA9 into a relatively cheap watt meter that then plugs into the wall. It's accurate for other devices like Li battery chargers etc. Reads to 0.1 decimals but don't know the accuracy.

I'm asking because at even higher than normal listening levels it shows the amp only drawing about 3.5 watts or less! The wattage varies as the music volume rises and falls from moment to moment but I'm s surprised at how little power it's using. Speakers are Elac DBR 62

It measures an average, which infers not an instantaneous value.

A couple of watts of power going to the speakers is likely to be rather loud,

The power required to go louder rises quickly, though.

Repeat the test with a sine tone...

Add up to 12dB SPL for four speakers if all playing the same signal at the same time.

Estimate of power consumed by one speaker at different levels: 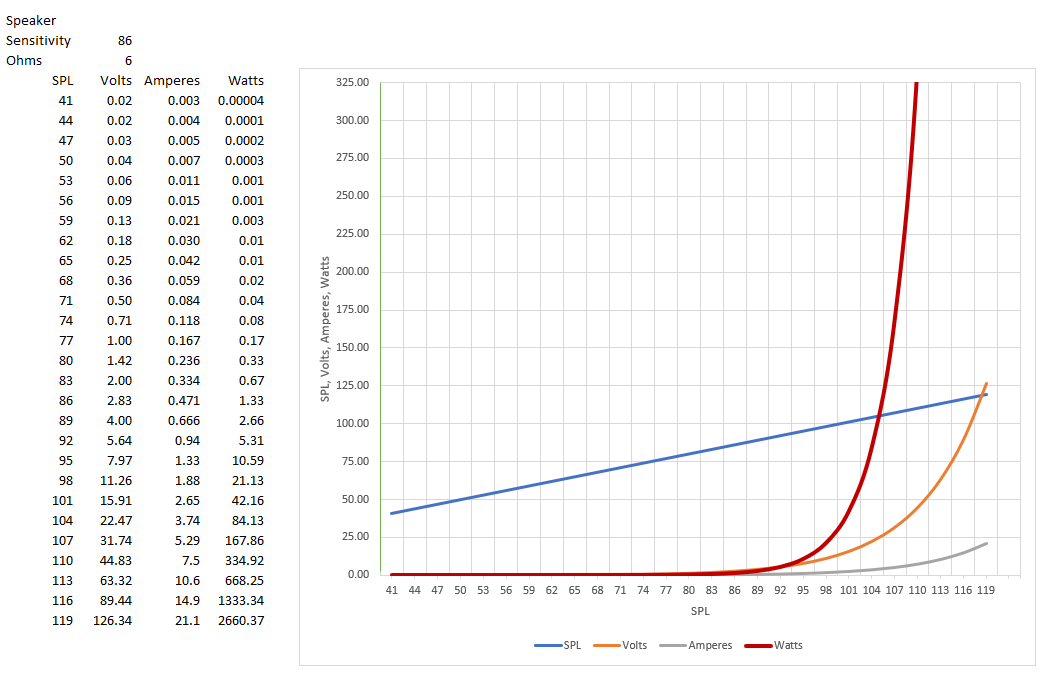 Add up to 12dB SPL for four speakers if all playing the same signal at the same time.

Estimate of power consumed by one speaker at different levels:

70+ dB SPL is almost nothing for power requirement.
Click to expand...

That's awesome! What's the SPL mean if there isn't a distance specified?

The sensitivity specification for speakers is usually referenced to a meter or so.

86dB SPL is measured at 1 meter (1m) when the standard test voltage is applied.

2.83Vrms makes 1 watt with an 8 ohm speaker, 2 watts with a 4 ohm speaker, and something in-between with a 6 ohm speaker (yours). All "more or less" as speaker impedance varies with frequency.

Without walls, the sound level would drop about 6 dB with each doubling of distance.

Class D amps are very efficient, though less so at very low power levels, but say it is 80% efficient so multiply by 1/0.8 = 1.25 to get the average wall power. The peaks will be significantly higher, but your meter is likely just measuring average power, and the power supply inside your amps supplies the peaks so the wall does not usually "see" the very fast peaks.

You can also look at something like this: _Peak SPL Calculator

Ray, would you mind posting (attaching) your spreadsheet? Seems like a cool thing to have...
"After silence, that which best expresses the inexpressible, is music" - Aldous Huxley
Technical Articles: https://www.audiosciencereview.com/...and-inquisitive-minds.8121/page-3#post-808622
My system: https://www.audiosciencereview.com/...ht-our-current-setups.564/page-27#post-672877

It's just not that helpful to measure the power into the amp... You want to know the power out, into the speakers. It's unfortunate that so few amps have peak power meters. Clipping indicators are more common but still rare.

I plugged my little SMSL DA9 into a relatively cheap watt meter that then plugs into the wall.
Click to expand...

Like Ray says, you're really interested in the peak power which can be 10 times the average or more or less depending on the program/music you're listening to. (It's the peaks that clip.) And even if the Watt meter could read the peak power out of the wall, the power supply in the amplifier stores energy so it won't "track" the amplifier's peak output power.

I don't recommend testing your amp with high-power constant test-tones (which would have the same peak and average power)... You could blow your speakers. The power ratings for speakers are based occasional peaks with regular program material, and with most of that energy going to the woofer.
Last edited: Aug 5, 2021
OP
D

So if power output of an amp is expressed as RMS does that mean most of the transient spikes in power are encompassed in the rating?

Destination: Moon said:
So if power output of an amp is expressed as RMS does that mean most of the transient spikes in power are encompassed in the rating?
Click to expand...

Aarrgghhhh... There's a lot to unpack in that simple statement.
HTH - Don

Don, thanks so much for that explanation. I had most of it from everyone's response but you summed it all up really well. I wasn't ignoring efficiency. But I figured If I'm measuring 4 watts going into the amp, then the actual power going out to the speakers was even less and, /2..,... I've been saying 4 watts but the actual draw from the wall was really 2.5 watts just after a loud section of music at my normal listening level. I'm still surprised how little (ave) power it takes to fill the room with sound! And for reference, my old Sony TA555 draws about 80 watts in similar circumstances

And I share your enthusiasm for horns! The Crusaders are my all time favorite
You must log in or register to reply here.

Watt for speaker and Watt for power consumption, Class D and AB
3 4 5