We can't go out to eat but maybe we can enjoy vicariously through videos like this:

I'm planning to splurge and (try to) go to Den while we are living here.
https://www.jimbochoden.com/en/

How the other half lives...

amirm said:
We can't go out to eat but maybe we can enjoy vicariously through videos like this:

Click to expand...
Restaurant is in my home country. Definitely hope to try them. The chef seems like a great guy, more expressive than the Jiro types. Been trying to snag a table with a friend for Odette as well (first 3 Michelin-star restaurant in Singapore).

Trouble Maker said:
I'm planning to splurge and (try to) go to Den while we are living here.
https://www.jimbochoden.com/en/
Click to expand...
I used to live/work in Tokyo. In fact, that's where I met Mrs K.

If you feel like going to Shinjuku, I highly recommend Sushi Ishikawa: https://sushi-ishikawa.jp/

High quality, somewhat pricey but worth it.

Recommend you sit at the sushi counter.

Love their negitoro temaki and uni!

I'm just a caveman. Your modern world frightens and confuses me. RIP Phil Hartman
B

I think I've been here back in 2016, at the Ginza location

kokishin said:
I miss Tokyo.
Click to expand...
Yeah, Japan can be a lot of fun, especially if on an expense account.

The common practice there, if you ask for a receipt, is (was) for them to ask "For how much?"

So we'd eat dinner (expensible) someplace cheap, ask for a big receipt for the food, to cushion the drinking expenses (generally non-expensible unless it could be worked into a "business meeting") for the rest of the night.

Sometimes, if we drank too much, we'd have to "eat" twice.

My first trip to Tokyo area, actually Kashiwa, to the northeast, to test ISDN machines, in 1986;

Four of us, for three, our first trip to Japan.

Get off the plane at Narita, notice I'm immediately totally illiterate.

Get two taxis, notice the military presence around the airport, since there were still problems stemming from the then new airport having confiscated rice paddies from the locals, drivers stop a couple of times along the way to compare maps and argue, because neither was familiar with we were headed.

Finally get to hotel, check in, up to room. Phone rings "Let's go". To meet two managers that had been there a month or so already.

This was Sunday afternoon, they'd been there since Friday, low tables, pillows, scatterred drinks and bottles and food dishes and newpapers, equipment manuals and drawings, faxes.... and finally Gus and Pete sprawled out,

I felt like I'd penetrated Col. Kurtz secret lair (as in Apocalypse Now).

It was at that moment I decided that a three month stay in Japan might not be so bad...

This was what I'll always think of as my final going away party, since I forever flew away the next day.

The Summer Party in the soccer fields behind NEC's Abiko plant: 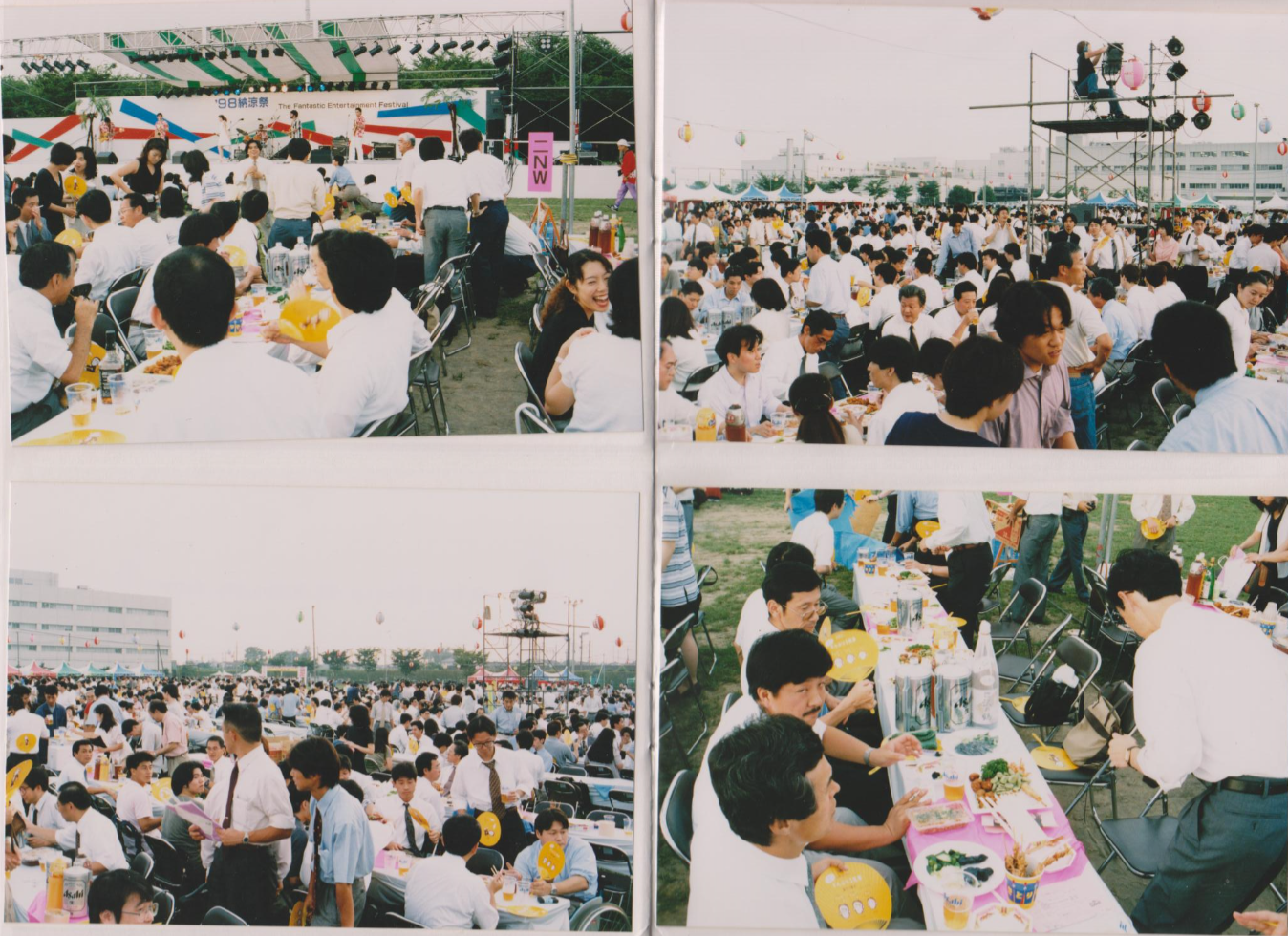 I don't know how we rated a table right down in the front, but, there we were.

The beer was supplied, Sumitomo Group owns both Asahi and NEC.

Ilkless said:
Restaurant is in my home country. Definitely hope to try them. The chef seems like a great guy, more expressive than the Jiro types.
Click to expand...
Indeed. The most expensive sushi I had was at a private club type of place. Was taken out by the top executive and owner of the company that did PC support for all major companies in Japan. The sushi chef there was wonderful (with seating for just 10 people or so for the entire place). He said that the top fishmongers at Tsukiji market would save him the best cuts because they liked him and thought the rest of the top sushi chefs were too arrogant! He gave us prices for some of the items and my estimate was that each of us had something like $1,300 in sushi alone! I was glad the other company was paying as there was no way I could expense that, even for a business "meeting."
Amir
Founder, Audio Science Review
Founder, Madrona Digital
Contributing Editor, Widescreen Review Magazine
Click for My Technical Background
Master List of Audio Reviews
OP

RayDunzl said:
How the other half lives...

Click to expand...
That's actually quite a few steps up from what conveyor sushi can be. Most of the ones in US are not edible. Even one of the ones in Tokyo we went to with our kids (trying to economize) was horrible.
Amir
Founder, Audio Science Review
Founder, Madrona Digital
Contributing Editor, Widescreen Review Magazine
Click for My Technical Background
Master List of Audio Reviews

amirm said:
The most expensive sushi I had was at a private club type of place.
Click to expand...
https://japansauce.net/2019/01/05/2019-most-expensive-tuna-sells-for-over-3-1-million-dollars/

What I will presume was the most expensive dinner I had, since menu to look at, no bill was presented.

Somewhere on the outskirts of Kashiwa, we were driven there by "a rich guy" that worked at NEC "to give him something to do".

A little dirt parking area, big enough for four or five cars, on the side of a country road. No signage that I could see. No other cars parked.

Get out, walk up a winding path through a bamboo forest in the fading evening light , leading to a doorway surrounded by vines and bamboo - it may have been the entrance to a cave, as there was no apparent building.

Enter the lobby, nobody there. Things to look at. After a couple of minutes, down the hall on one side a door slides open. We go to that room and sit down. Somebody unseen slides the door closed.

There's already drinks and snacks and hot towels on the table.

After a while a door in the back of the room slides open, Towels taken more drinks delivered and soon the first of several deliveries of food arrive. No words spoken by the staff (nice kimono ladies) that I remember.

When done after a couple of hours, we just leave.

Those are awesome stories and pictures!

It reminds me of my first few business trips here, to Hokkaido in the winter, staying in Asahikawa. Walking down a large road, turning onto a smaller road, to an alley, to a walkway, to a narrow walkway, at that point thinking I shouldn't be there because this is where you don't go in large cities in the west, then finally getting to the restaurant usually with 10~15 seats and it was absolute amazing. Some of the guys I went up there with had been spending months of each year up there for 20+ years, they know all of the best places to eat, and the food up there is incredible.

I can't even imagine living here before cell phones/google... it makes it all so, relatively easy and accessible, to the point where I'm sure it is on one had making everything much more livable but also hindering my language progression. My old boss who lived here ~15 years ago used to know which train stop to get off at by looking for J, B, Snowman in 宇都宮.

Japan was the one country that the more I went there, the less I understood it. It was probably the toughest place for me as a vegetarian to find a decent meal- our business partners there took us to some amazingly elaborate restaurants in Tokyo, and I felt a bit bad for not really eating anything. There was, though, a tempura restaurant in Kumamoto that was stunningly good, one of the most memorable meals I've ever had.
“Emergencies” have always been the pretext on which the safeguards of individual liberty have eroded.”
― Friedrich Hayek

Mrs K and I would meet the future in-laws there for a family sushi dinner on occasion.

kokishin said:
If you feel like going to Shinjuku, I highly recommend Sushi Ishikawa: https://sushi-ishikawa.jp/.
Click to expand...
We've been down to the Shinjuku/Harajuku area a few times already, I'm sure we will be there again and try to check that place out.

kokishin said:
I miss Tokyo.
Click to expand...
We are already talking about how we will need to vacation here occasionally due to missing Japan.

Trouble Maker said:
My old boss who lived here ~15 years ago used to know which train stop to get off at by looking for J, B, Snowman in 宇都宮.
Click to expand...
The only Japanese writing I learned was my city name:

I called it (to myself) Christmas Tree and a Birdcage.