And we're not off to a good start. I looked at this calibration screen thinking, "Weird the level should be higher than this": 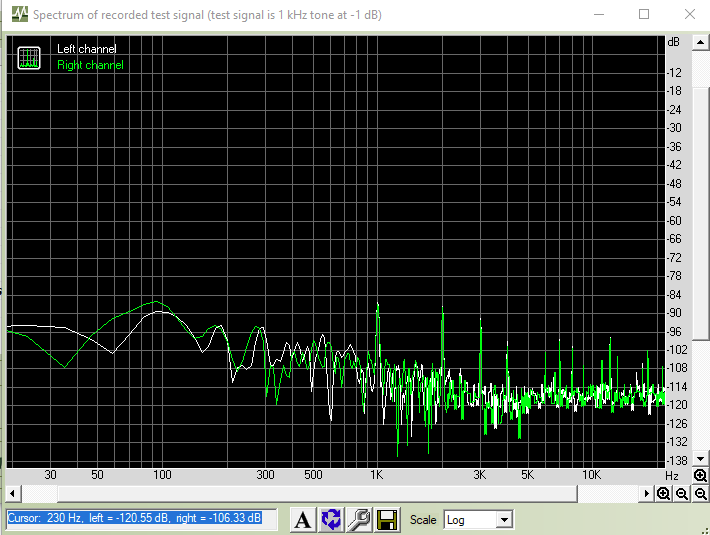 And then I realize I have the wrong input selected on the NFB-5. Anyway, I'm doing this because I have a pet theory that the less something from Audio GD costs, the better it measures. I think this nearly the cheapest DAC/headphone amp they ever made, so I expect it to be almost competent. Keep in mind, the testing device is my sound card.

Anyway, the NFB-5 uses a pair of Wolfson DACs (I forgot which and the page for this first version no longer exists) in a dual mono configuration for some reason. I say "For some reason" because this is otherwise a single ended device, and it doesn't have particularly good SNR or crosstalk performace. Also, the DAC always upsamples. You can pick how much, but the lowest is 2X, and you need to keep the sample rate of what you're playing through it in mind because if the final sample rate would exceed the DAC's capabilities it just outputs something akin to pink noise. It also has selectable filters, but I don't have the capability to measure them. FWIW I had the DAC set to 4x upsampling, linear phase soft knee. Oh yeah, and if you want you can add an extra opamp into the single path. Maybe there's a language barrier thing going on here, but that's what it sounds like. By default it's just an off the shelf unit so it does nothing or almost nothing to the sound, but you can replace it with one of their modules that do change the sound, one of them ostensibly sounds like a tube. Here's what's left of the web page for the later version of this (which is also discontinued)(There are a lot of broken jpegs): http://www.audio-gd.com/pro/Headphoneamp/NFB5/NFB5EN.htm
It exclusively has digital inputs and analog outputs.

...Of all the things for the wayback machine to capture the images of...
https://web.archive.org/web/2012070...gd.com/pro/Headphoneamp/NFB5/NFB5EN_Specs.htm

Well, you can see the graphs now, but that doesn't match what I was able to measure.

But in the mean time Windows started claiming there wasn't enough USB resources available, so I plugged it into a USB 3.0 port after a fair bit of annoyed troubleshooting (was causing problems not related to USB because RMAA throws a shitfit it any audio devices are added or removed while it's running).

SO USB carrier waves are leaking into the analog out... even when USB isn't the selected input. This is with TOSlink as the only connected input but USB still selected on the unit.

White is the X-Fi's Line out looped back to it's line in (it can be either a microphone jack or a line in, it was set to line in), blue is the X-Fi's SPDIF out to the NFB-5 going back to the same line in, green is NFB-5 USB to X-Fi line in:

Frequency response: It looks like my desire for a discrete DAC isn't irrational, as the X-Fi is yet below the NFB-5 in low frequencies, so that isn't just a limitation of the line in. Don't think of that as a win for the NFB-5, though, as it seems to be rolling off in the audible band and then truncating everything past ~22K even though I'm conducting this test at a 96 KHz sample rate. Edit: A mistake in the testing set up (explained at the bottom) resulted in the missing frequency response. 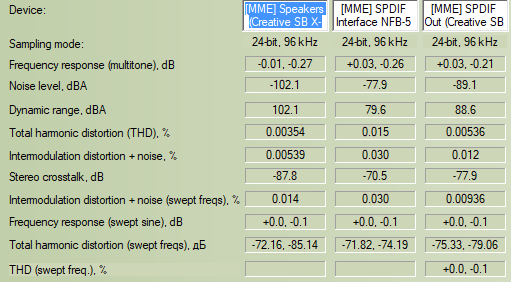 SPDIF in gave the best results, so I'll test the headphone out using that. Audio-GD sometimes says their stuff works better in high gain mode, not sure if that applies to NFB-5 : 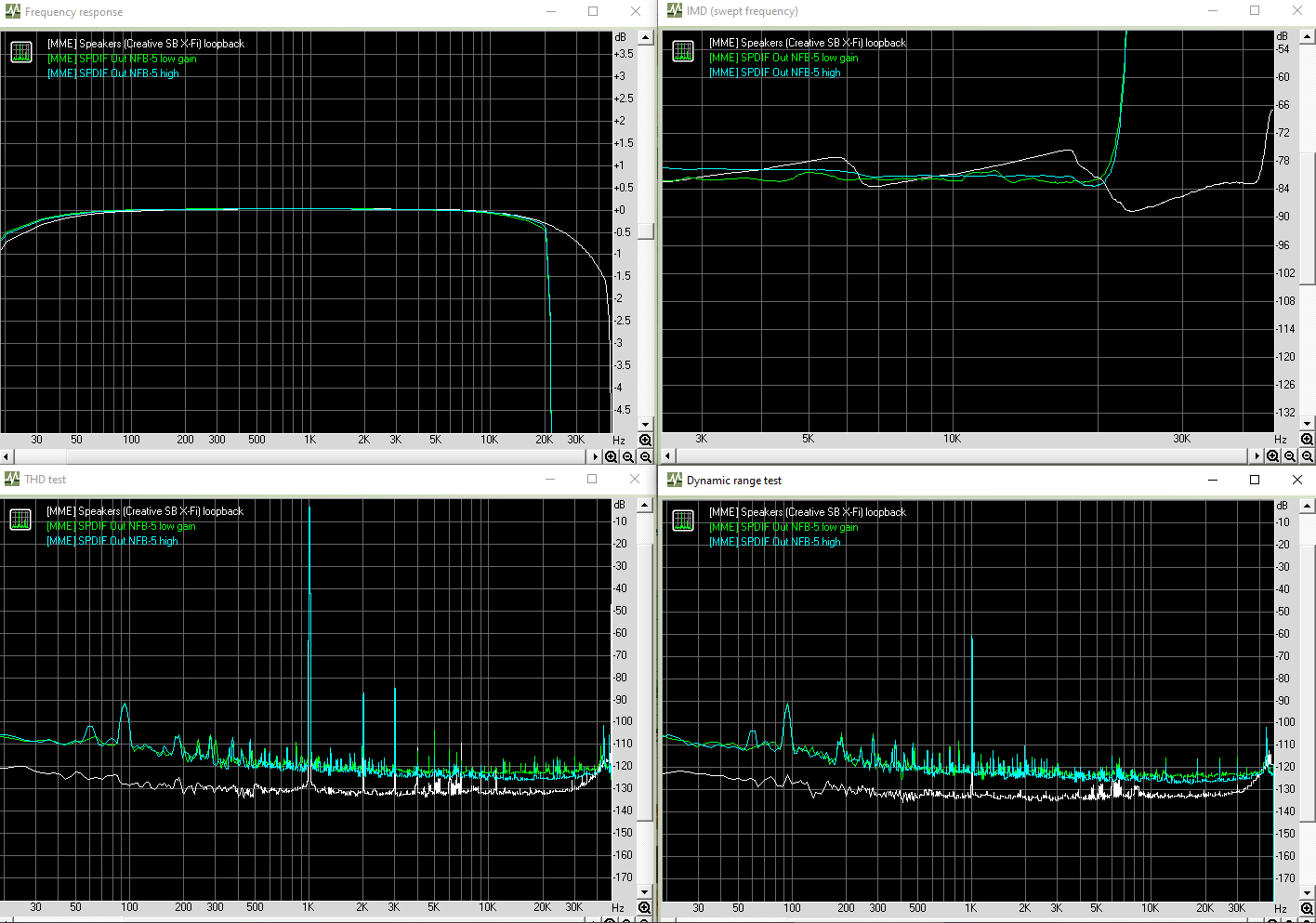 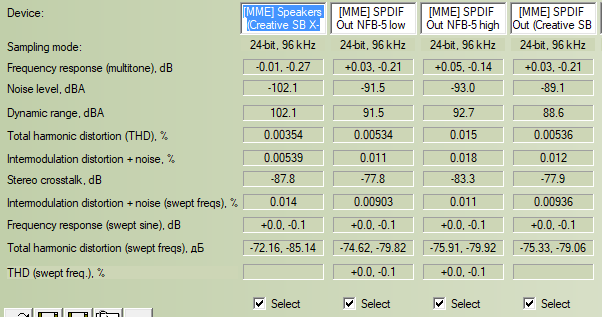 SOMEHOW better in some measurements, worse in others. Columns are loopback, low gain headphone, high gain headphone, and DAC line out. SNR is better in high, but THD gets worse, IMD gets better. Pick your poison, I guess. Note that for some reason the gain selector also applies to the pre-out. I'm tired of messing with RMAA and this is just for fun, so I'm not retesting with high gain line out(!?).

So Why'd I get this thing back in the day? At the time I wanted to get a set of HiFiMan HE-4's, but there wasn't much that could power them, maybe some of the Headroom stuff, but that was kind of it unless you were looking at kilobuck amps, And no one was measuring Headphone amps. Plus, I wanted something with optical in so I could possibly use my X-Fi's features with big headphones, particularly for games.

Bit of an anecdote, but for a reason I can't recall I was listening to a 370 Hz tone (low frequencies I can still sorta hear the "beating" of the bass note, higher is too loud) out of the NFB-5, and I thought I could hear a crackle like I was changing volume with the knob even though I wasn't.

Edit: Discovered that the way I had RMAA configured was apparently using shared mode, and long with it, Shared Mode's sample rate of 48KHz. Setting the sample rate to of shared mode to 96KHz to match the analog loopback fixed this issue.

Expanded the description of the actual unit, I glosses over some pretty amusing eccentricities. Let me put it this way, if Doug Demuro reviewed audio gear, this is the sort of thing he'd want to make a video about (Oh no I sort of made a car analogy).
Last edited: Jun 5, 2021
OP
P

Double posting to mention that I made a pretty sizable edit to expand the description of the unit, but more importantly to correct an issue with the testing methodology that caused the frequency response to roll off like that. No other tests improved when I corrected that issue so I'm not going to completely rewrite the results. OTOH, I do think I revealed some temperature sensitivity, but RMAA doesn't really have a good test for that and tests of discontinued audio gear of this variety aren't really consumer advice anyway.
You must log in or register to reply here.

Sunday at 6:14 AM
Volikovvv
V
P
Long overdue to replace my NFB-5