THD Hump?
Time to decode the setup for the ESS DAC. I don't know if it's correct to post this in this forum thread, or if it's better to start a new thread, please give me a hint. Anyway, I've been interested in what @amirm has called "the ESS hump", where the measurements have a rise in THD when doing IMD measurements. By checking how the DAC is set up, we can start to see why some implementations don't have that problem. I know that both @amirm, me and others have had a suspicion of the built-in THD compensation available on the ESS DAC's. So let's go down the rabbit hole and see if that's the case. 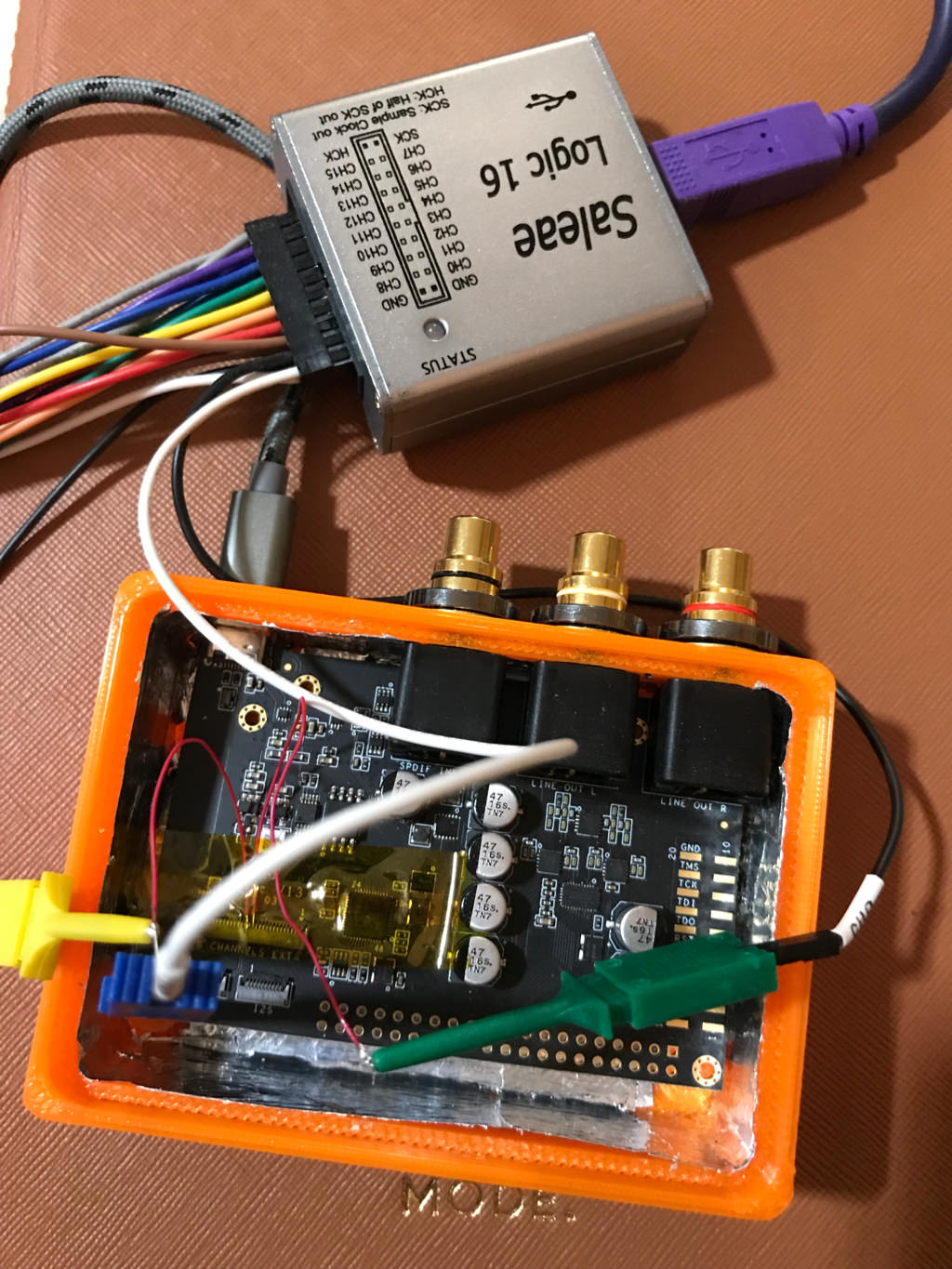 So I've hooked up my Khadas DAC to my logic analyzer and dumped the communication between the XMOS USB chip and the ES9038Q2M chip. I'm going to over-explain everything so even if you don't have the knowledge of electronics or how it works; you will still be able to follow along.

I2C (pronounced eye-squared-cee)
First, let's start with how the XMOS chip communicates with the DAC to set it up on startup. It uses a hardware protocol called I2C, which was developed by Philips back in the '70s for communication between IC chips. The protocol is very simple; it only needs two signal lines, one is a clock signal called SCL and one called SDA for data. You have a Master IC that talks to Slaves on the two lines. There can be several Masters and Slaves on the same lines because all the chips have an ID-number so that the Masters can address the specific chip with a corresponding ID number.

Communication
The Master initialise either a read or write to a specific register. The IC's have two specific addresses, one for writing and one for reading. In our case, the ES9038Q2M has 0x90 as write and 0x92 for reading. The numbers are in hexadecimal. What we are interested in at first is what registers are written to, and with what value.

Boot sequence
I have uploaded the boot sequence in a file you can download and follow along. All you have to do is to download the Saleae logic analyzer software. You can use it without any logic analyzer connected and load my file without a problem. 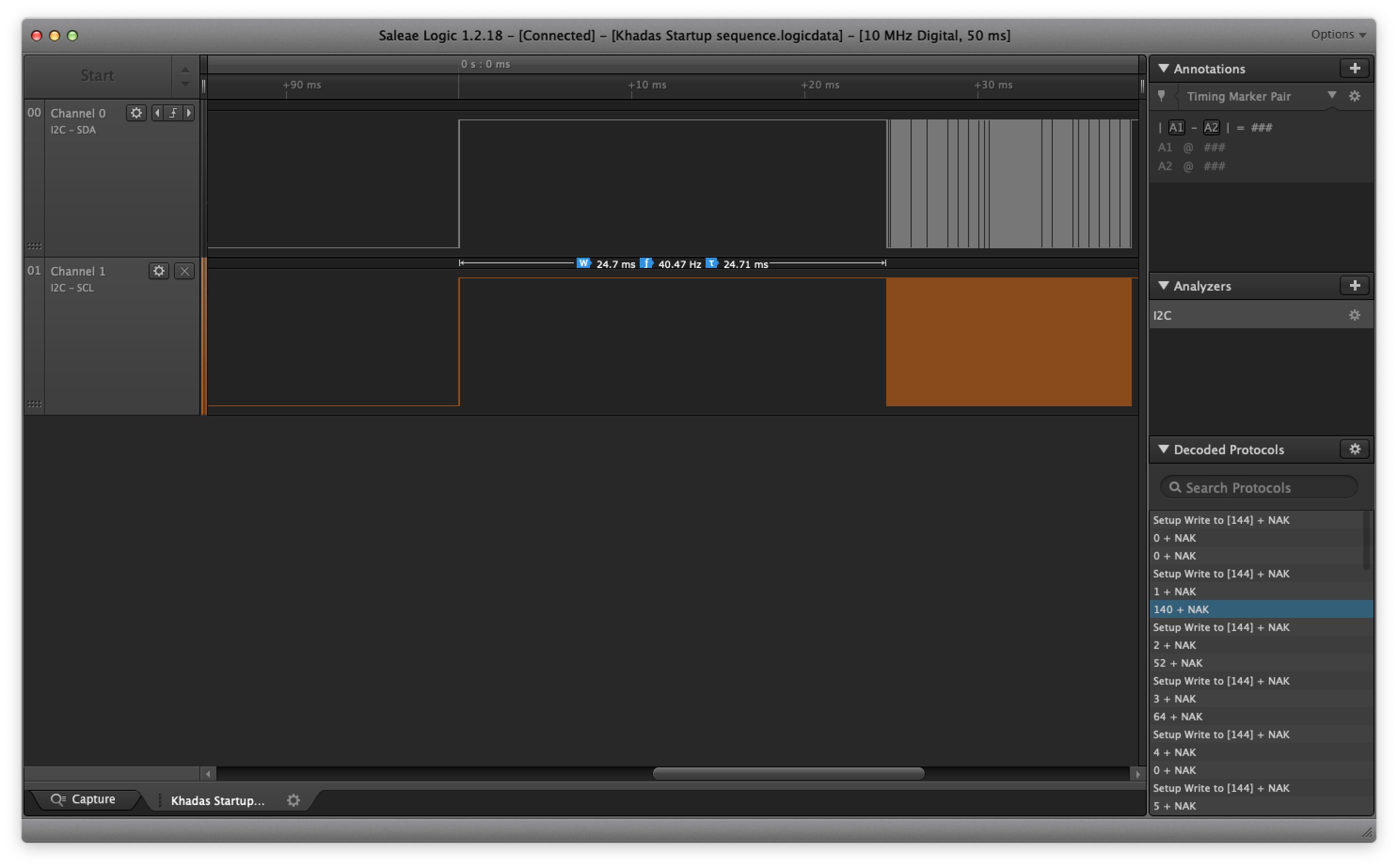 Sanity check
Let's first see if I managed to capture values that is correct. First, we need to get hold of the datasheet for the ES9038Q2M DAC. Having to do that is usually done by signing a non-disclosure agreement, which is stupid in my humble opinion, but they've decided to do that. Fortunately for us, there is a multitude of places to download it anyway.

So let's check if our data looks sane.

So register 0 sets up the oscillator drive, clock divider and soft reset and is by default 0. Checking the captured data, that is precisely what we get. 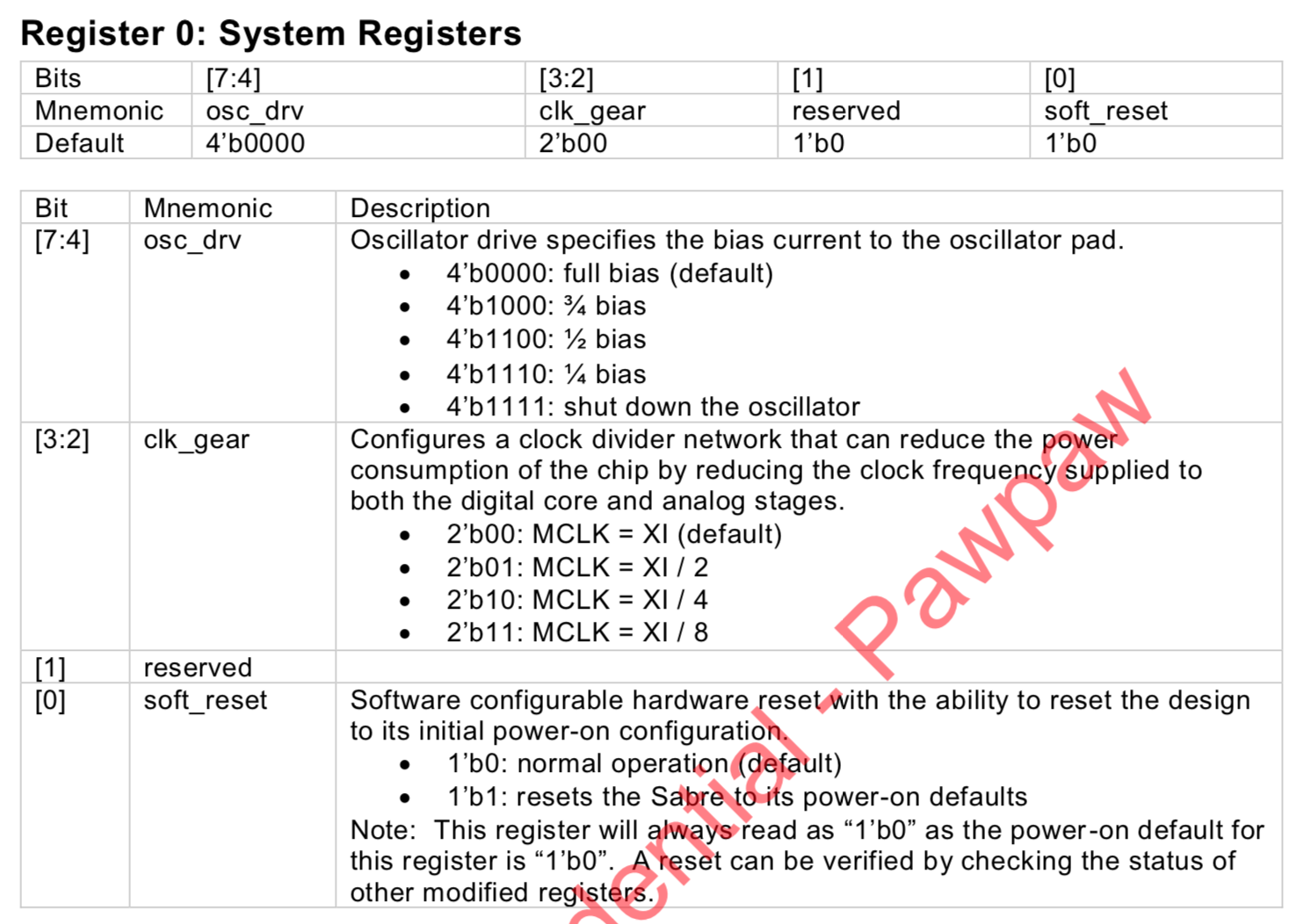 Register 1 is for input selection. It's easier to set the display of the captured data to binary because the register has several bits that determine different functions. Input select are designated with [1:0] which in normal speak means bit 0 and 1. The default setting is 00, which we have, so let's continue to check the bits.
Auto select: bits 2 and 3 specifies what kind of input signal the DAC is to expect.
2'b11: automatically select between DSD, SPDIF or serial data (default)
So this seems to be set to the standard values as well. Looking good.
Next is serial_mode. That should be set to 00, which it is. After that, bits [7:6] selects the word length of the audio data, and it should be set to 11. So it is. So we can now be quite confident that we have valid data captured. 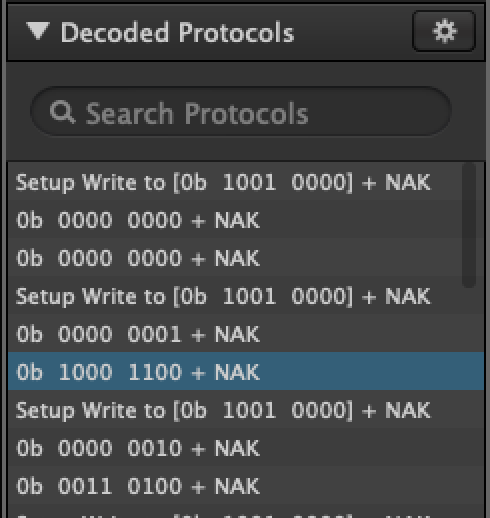 So where do we go from here? Well, time to replace the logic analyzer that only reads values and use a Bus Pirate that can inject values to registers instead. However, first I need to get my QuantAsylum QA-401 setup to read the THD correctly and then enable the THD compensation. The next step would be to try to feed coefficient values and try to knock down the already low harmonics. However, that has to be done at a later stage. Maybe we could give the correction coefficient values to Khadas as a Christmas present?

Fantastic, I created a thread for this brilliant post, thanks @jackenhack .
independence, we do it together..
https://www.patreon.com/audiosciencereview
OP

Does anyone have any information on the coefficient value for the THD compensation for the ES9038Q2M? The documentation is really anaemic when it comes to that information.

I could just bit-bang it, and just write a Python script to inject values.
Hey, check my blog!
OP

I have let the logic analyzer run for a while, during which I have changed between different formats, like DSD, high-res, but the XMOS doesn't send any new values. It would be a piece of cake to program something like an ATtiny85 microcontroller to inject whatever we like if Khadas is not interested in changing their drivers. Hell, when we have control of the I2C bus, hardware volume control or an OLED display is also easy to design.
Hey, check my blog!
S

Hm... Does that mean that a lot of ESS DACs have the IMD hump due to an error in the data sheet?
If that is the case, wouldn't it be easy to some of the manufacturers like SMSL or Khadas to send Amir some experimental firmware and he measures the devices like the Tone Board or the SU-8 again?

It may be the case. We need to enable the feature and see if it makes a difference.
Amir
Founder, Audio Science Review
Founder, Madrona Digital
Review Thread Rules
My Technical Background
My YouTube Channel
OP

Maybe we could convince @amirm to buy a Bus Pirate?

As soon as I get hold of an extra Raspberry Pi, I can set up a measurement of the Khadas DAC using my QA-401 audio analyzer. But the DAC is pretty close to the noise floor of the QA-401. I have built a 1kHz twin-t notch filter, so I can measure lower values, so that's an option. I'll try to get the time to set it up during Christmas.
Hey, check my blog!

jackenhack said:
Maybe we could convince @amirm to buy a Bus Pirate?
Click to expand...

Sure. If you can walk me through using it to patch my board I can certainly do that and repeat measurements.
Amir
Founder, Audio Science Review
Founder, Madrona Digital
Review Thread Rules
My Technical Background
My YouTube Channel

jackenhack said:
As soon as I get hold of an extra Raspberry Pi, I can set up a measurement of the Khadas DAC using my QA-401 audio analyzer. But the DAC is pretty close to the noise floor of the QA-401. I have built a 1kHz twin-t notch filter, so I can measure lower values, so that's an option. I'll try to get the time to set it up during Christmas.
Click to expand...

FYI the problem is also visible in sweeps of THD+N. It is much less pronounced there but visible still. So try that and see if you can detect it.
Amir
Founder, Audio Science Review
Founder, Madrona Digital
Review Thread Rules
My Technical Background
My YouTube Channel

yue said:
I talked to Toppings in July about thd_enb value. They said they tested it in their DX7s but was unable to reduce the hump.
Click to expand...

My guess is that in several board designs this setting will make little difference.

It is hard for me to imagine that so many manufacturers did not play around with this kind of setting just to see what it does.

Maybe it even needs an extra hardware implementation to be usable?

I think we still need to know what it does. They claim it improves THD performance so surely it shows up some place.
Amir
Founder, Audio Science Review
Founder, Madrona Digital
Review Thread Rules
My Technical Background
My YouTube Channel
Y

amirm said:
I think we still need to know what it does. They claim it improves THD performance so surely it shows up some place.
Click to expand...

I already mentioned it various times in the forum. the thd_enb is an on/off boolean to control whether or not to adjust the 2nd and 3rd harmonics. When it's enabled, the developer can adjust thd_comp_c2 and thd_comp_c3 value (both are 16 bit signed) to adjust 2nd and 3nd compensation accordingly.

Maybe the folks at Benchmark can solve this for you as I believe their products do not have the ESS hump?
Equipment: 2 x ears
Y

digititus said:
Maybe the folks at Benchmark can solve this for you as I believe their products do not have the ESS hump?
Click to expand...

So the hump is only for 9038 generation chips?
Equipment: 2 x ears
Y

digititus said:
So the hump is only for 9038 generation chips?
Click to expand...

What sort of enclosure is shown in the first photo?
I've got soul, but I'm not a soldier...
OP

Ron Texas said:
What sort of enclosure is shown in the first photo?
Click to expand...

That's my quick an dirty 3d printed one I made before I got the board. If you like, send me a message with your email address and I'll add you to the project files in Fusion360.
Hey, check my blog!
OP

SemperUnum said:
t is hard for me to imagine that so many manufacturers did not play around with this kind of setting just to see what it does.
Click to expand...

Yet you see a lot of manufacturers leaving it over the driver development to a German company (which name now eludes me.) I'm pretty sure Khadas uses the XMOS example code without any modifications except sample rates and bit-depth.

There's only one way of finding out. I'll set up the experiment tomorrow and do the experiment. I'll keep updating this thread.
Hey, check my blog!
You must log in or register to reply here.

THD and IMD Measurement: Do they represent the actual nonlinear distortion?
2 3