What creates Unit to Unit Variation in Headphones.....and further relevant discussions around this topic.

Hello Folks! Recently I've come to the conclusion through my own experience that unit to unit variation in headphones is a massive barrier/influencer to enjoyment of headphones. I've created this thread because I think Unit to Unit Variation is a massive thing that should be focussed upon by manufacturers / users / & reviewers if possible (stipulate x3 units to review each time if "pie in the sky"?). Really the unit to unit variation variable should be a massive decider in which headphone you choose to buy, and should also be forefront in manufacturers & reviewers minds.

We all know that measurements & Harman Target is a massively good starting point (& sometimes end point) for choosing a headphone that sounds great, and also increasingly for a means upon which to apply EQ to such published measurements (be it Oratory / Crinacle / Amir / Resolve or any other GRAS unit measurement reviewers out there). The problem & unpredictability starts though with unit to unit variation - those reviews & measurements only matter for that headphone unit measured, as it's possible that other units of the same headphone model will not measure the same and therefore your experience when you buy & listen to that headphone will certainly not be the same, and as it follows also if you EQ your headphone using those measurements then there's no guarantee you'll be hitting the Harman Target or whatever Target Curve you choose. This is not a problem if unit to unit variation is low, but is increasingly a problem in models & manufacturers that have larger unit to unit variation.

I mentioned earlier of "my own experience", well I've got 3 units of K702 and 2 units of HD560s, and they do not sound the same within the same headphone model! I sent two units of K702 to Oratory to measure and one unit of HD560s - he also kindly sent me the personalised measurements of those headphone units to me so I could do EQ's to the Harman Curve based on those measurements - thereby defeating any unit to unit variation when EQ'ing to the Harman Curve - turns out I like the Harman Curve! However, a third K702 I bought that has not been measured by Oratory and I tried applying the published Oratory EQ to that and it was an improvement, but due to my experience I knew there was more tweaking to be done.....using his broad customisation filters that are designed to be tweaked by the user I was able to bring again closer to what I experience as accurate/ideal, but still I could not quite reach what I know to be the best target. The reason for this failure is due to the large unit to unit variation of the K702. I say this because that's been "proven" by Oratory's measurements of the two headphones I sent him, but also I have a contrasting successful experience with the HD560s where I was able to tweak my second unmeasured unit of HD560s to sound really the best experience I've had in a headphone, even better than the unit of HD560s I sent to Oratory that was personally measured by him after doing an EQ based on that individual unit's measurement. I think the reason for my success of tweaking my second unit of HD560s was that the HD560s does not have a high degree of unit to unit variation so the Oratory EQ was really a great starting point upon which his "user customisation filters" were able to allow me to tweak them to what is for me a perfect (best so far in headphones) & accurate sound.
My main point being that if unit to unit variation is high then published EQ's/measurements are less reliable and the harder it is to arrive at a good sound if the starting point is so far off. (I haven't provided frequency response graphs showing unit to unit variation I've mentioned as I'm making a general point and this thread is not about me, but I can include them in later posts if asked).

So really this thread is anything related to unit to unit variation, as I think it's a super important topic in order to get a best headphone experience. Let the discussions commence, in my experience it's a very important topic that can be a make or break for enjoyment of a headphone, and one that is often overlooked by both reviewers / measurers & users alike! Looking forward to hearing from anyone with experiences / ideas / thoughts / information / answers.
Last edited: Feb 20, 2022
PC Setup: SoundblasterX G6 DAC -> JDS Labs Atom Headphone Amp -> AKG K702 & Sennheiser HD560s & Hifiman HE4XX & NAD HP50 & Sennheiser HD600 all EQ'd to Harman Curve.
TV/"Home theatre" Setup: Sony Bravia KDL42w653a (calibrated with Spyder4Pro and HCFR) -> miniDSP 2x4 -> JBL 308P Mkii Speakers (2-channel)
Music Listening Setup: (as TV/"Home theatre" Setup above except....) Laptop -> (REW/Equaliser APO) -> Topping E30 DAC -> JBL 308P Mkii Speakers (2-channel)

It can only be either poor QC within and between production runs and/ or part swaps between runs.

You're still in the weeds though unless one measurer sticks multiple units from multiple runs through the process to determine overall consistency/ drift.

With a caveat- dont forget Amir always suggests taking any measurement with a pinch of salt given differences due to seating etc of the same unit.
Too many DACs> Too many amps> Too many headphones
OP

Some good thoughts Jimbob, you do indeed highlight some practical difficulties associated with unit to unit variation in terms of being able to see how much there is within a headphone model. I think it would be beneficial for headphone enthusiasts (& perhaps the companies that cater for them) to truly get a grip & visibility on the unit to unit variation issue. It would indeed take pressure on both ends to get it sorted: pressure from reviewers & measurers to elucidate the unit to unit variation through measurement & publication....and then indeed the manufacturers to respond to that pressure/visibility to improve and also to provide clarity of how tight their unit to unit variation really is. I think it's a consumer/public awareness point in order to get manufacturers to realise the saleable asset they can corner by creating low unit to unit variation headphones....it's a massive thing in my experience, but I think it's also a very invisible & under-the-radar dirty secret at the moment. If I was to truly highlight one point of headphone fidelity that is an easy untapped resource - that's unit to unit variation. Manufacturers / reviewers & users would be served massively well if they all aligned on cracking down on unit to unit variation.......and the manufacturers that get on that band wagon first are the ones that will gain the most dividends.
Last edited: Feb 20, 2022
PC Setup: SoundblasterX G6 DAC -> JDS Labs Atom Headphone Amp -> AKG K702 & Sennheiser HD560s & Hifiman HE4XX & NAD HP50 & Sennheiser HD600 all EQ'd to Harman Curve.
TV/"Home theatre" Setup: Sony Bravia KDL42w653a (calibrated with Spyder4Pro and HCFR) -> miniDSP 2x4 -> JBL 308P Mkii Speakers (2-channel)
Music Listening Setup: (as TV/"Home theatre" Setup above except....) Laptop -> (REW/Equaliser APO) -> Topping E30 DAC -> JBL 308P Mkii Speakers (2-channel)

This reminds me of the unit to unit variation in the early hdtv market. I was an early adopter, and most recommendations by those in the know was to have the set callibrated professionally or otherwise. The manfacturer excuse I read most often was inter component variability ( 1% accurate sub components too costly ) or that assembly line auto calibration would add too much cost. To a great degree that problem is gone by now. I'm hoping this gets worked out in production... I have hope
LaZy Boy Recliner : RME ADI 2 FS >
DCA Aeon Closed X / ZMF African Blackwood Auteur

@Robbo99999 you should publish here your measurements demonstrating the variations. I find it curious you did not lead with those…
OP

dc655321 said:
@Robbo99999 you should publish here your measurements demonstrating the variations. I find it curious you did not lead with those…
Click to expand...

I haven't done my own measurements, my direct unit to unit variation experience of my multiple units of K702 & HD560s is based on my subjective listening, but Oratory has measured two units of my K702 that I sent him which illustrate the unit to unit variation problems that can occur, so I'll put them up, I'll edit this post later with the details, don't have time before work now.

EDIT: actually I do have time! 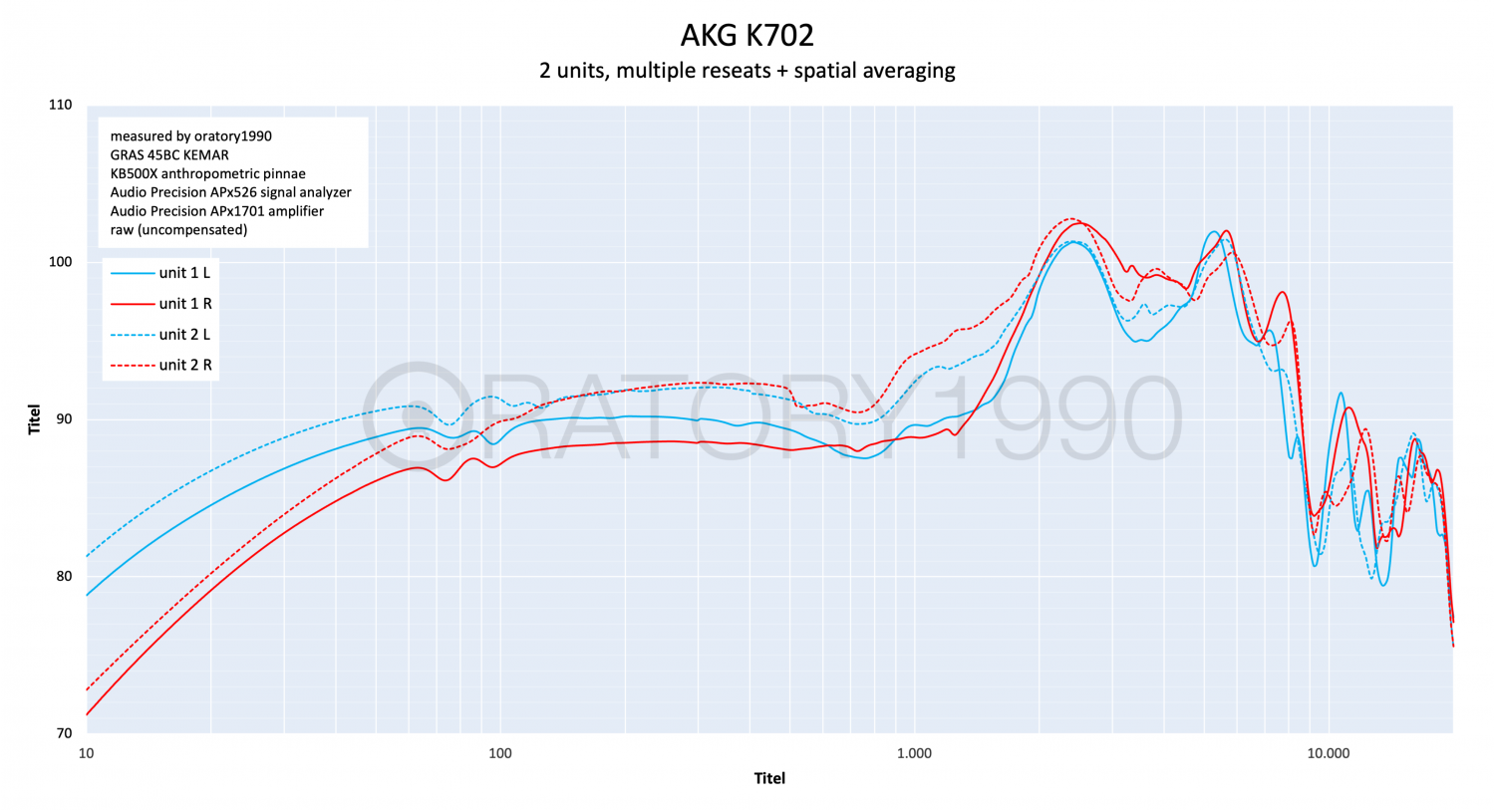 The best headphone for EQ