bigjacko said:
If adding distortion makes music more pleasing, I wonder why the music mixers have not found this. Some guitar effects are distortion, so it should not be too hard for them to relate to mixing. There must be some experiment or maybe accident that make people find out adding distortion is better. Of course those are just guesses.
Click to expand...

But they have. Plugins for recording and mixing software, that add "pleasing" distortion, already exist, and I have to presume, are being used. Edit: sorry, I see others have already replied about this. Maybe I should add, that I have used just such a plugin and I quite like the effect on the sound. Definitely more enjoyable/pleasing!
Last edited: Sep 20, 2021
0

GimeDsp said:
I've noticed songs are much dryer and sterile on headphones, that is defiantly one place where tubes can.
Click to expand...

With headphones you get no room interractions. A better way, than just adding tubes, would be a room simulation algo - maybe simple light reverb even
A

Music is art. Intentional distortion (tube guitar amps) has been used for ages. Ditto the compression of tape as it enters saturation (was always a process variable). Now distortion and noise is added during post as noted above. Some of use have even made money on it Again, music is art. There is no right or wrong, but the artist(s) get to choose what they release.

We know that added noise can increase the ability to pick up low level signals (in machines and the brain). And while white noise can mask other noises, it can also keep us focussed on important sounds in an otherwise too quiet environment where everything becomes a distraction. Intentional cross talk can help center an image in a poor acoustic environment.

audio2design said:
but the artist(s) get to choose what they release.
Click to expand...

I think most record companies make that decision. I think these days many artists have to make compromises because of requirements put on them by the record company they signed with.
A

RHO said:
I think most record companies make that decision. I think these days many artists have to make compromises because of requirements put on them by the record company they signed with.
Click to expand...

I am not sure that is a bad thing
R

audio2design said:
I am not sure that is a bad thing
Click to expand...

Loudness wars ring any bells?
A

The real one, or the perceived one from use of dynamic range testing software that does not work properly with vinyl?
R

audio2design said:
The real one, or the perceived one from use of dynamic range testing software that does not work properly with vinyl?
Click to expand...

The real one.
You don't even need to measure it. You can hear it. And artists complain about it.

I think I posted about all the rack gear and plug ins designed for distortion a few pages back, its been popular since the 80s and the"distressor" is a very common piece of gear now.

Heres the thing though. In a treated room with boss hog speakers a mastering engineer can apply distortion carefully to the mix. With side chains from mid/side possessors/eq they can also treat the center and sides seperatly.

In a non treated room by the time you hear the distortion you are likely a great deal beyond hearing threshold in a treated room.

I am not saying all mastering engineers use subtly just that that can with high resolution systems.

We know from the loudness wars and from famed engineer Bob Katz that the artist/label gets what they want!
If its high distortion and low dynamic range they get it!
OP

Some friends have pointed out to me that some aspects of my previous post are described too “hermetically”.

One of the aspects on which I struggled the most in providing explanations is that relating to the sentence where I affirm that "the amount of distortion digitally injected is that actually audible only at a certain level of listening", set as a parameter in the model. Therefore, even the listening tests are only valid for this listening level.

To better explain this point, it is necessary to spend few words on how a preamp, or the preamplication section of an integrated amplifier, "arrives" at the output signal with the desired level, based on the volume control.

In short, the amount of the amplification of the input signal applied by the preamp stage is always the same: it is the one reported in the technical characteristics under the item Gain (G below). For a preamp it is typically between 10dB and 20dB. For example, if we have a sinusoidal signal with a peak-to-peak voltage value Vin = 1Vrms in input to an amplifier with G = 20dB, we will have at output the same sinusoid with Vout = 10Vrms. Since this value determines also the listening level, it must be controlled by the user. This naturally happens with the volume knob, which attenuates the signal. Based on the point of the preamp circuit where this attenuation is performed we can distinguish two design approaches:

In my previous sentence I was implicitly referring to the first approach, which is by far the most used. Let's briefly see both below, in relation to the static nonlinear distortion model described previously.
In the following, please remember that the masking effect of our ear:


Type A: Input Attenuation + Amplification
For the first type of preamp the signal management is outlined in the following figure. 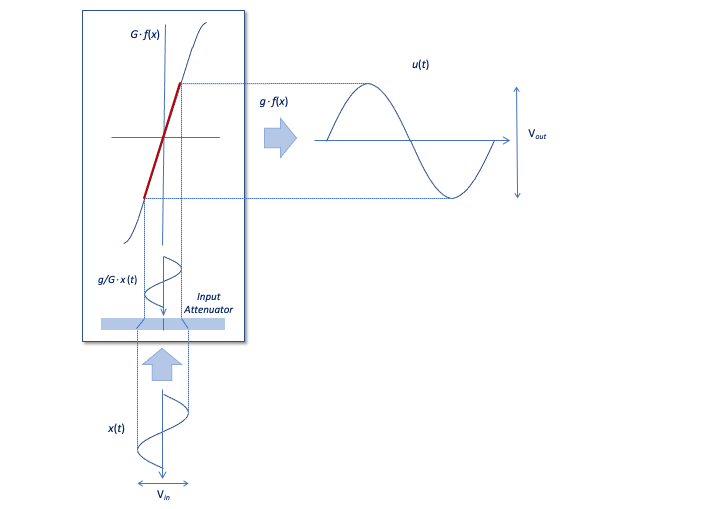 Basically, the input signal x(t), which we assume of fixed intensity Vin for simplicity of exposure, is attenuated by a certain amount controlled by the volume knob, before being subjected to the fixed amplification part of G value. The volume control then determines the portion of f(x) curve (responsible for the distortion) around the origin that is actually used and therefore the maximum extension to avoid clipping.
From the point of view of output distortion this implies that:
For this type of preamp the digital distortion simulation is valid only for a certain volume level. On the simulator it is possible to configure how much of the f(x) curve to use, and therefore how much distortion to inject, which cannot then be modified once the distorted digital signal has been generated, as happens by modifying the volume of the real amplifier.
What has been described can also be applied to power amplifiers, as the gain G is fixed: it is the preamp that determines the part of f(x) that is used via Vin.


Type B: Amplification + Output Attenuation
For the second type, used less frequently, the signal management is outlined in the following figure. 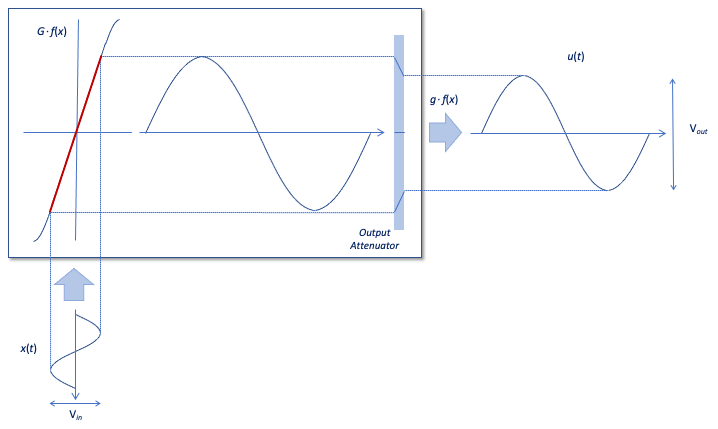 Here the input signal x(t) is amplified first and then attenuated before the output to the desired level. In this case, a much wider part of the curve than the previous type is used. The amplifier circuit must have a very high voltage swing here, which requires more demanding circuitry and components. The amount (in dB) of the output distortion is practically independent of the set volume. In theory, amplifiers with crossover distortion could benefit from this design, since this is then attenuated at the output and can first be “covered up” by distortions due to the more distant parts of the curve.

For this type of preamp the digital simulation of distortions is correct for any volume level, since the amount of curve f(x) to be used in the simulation is always the same, like for the real amplifier, regardless of the volume.


Final remarks
To understand which of the two types of situations we are in, it is necessary to measure the distortion of the harmonics for different volume settings. Assuming that the crossover distortion is absent, if the distortions (in dB) are practically independent of the volume then we have the second type; if the dB values rise as the volume increases, we have the first type.

What about the differences in sound? In my limited experience on the comparison of the two types, in the second warmth, body and dynamic contrast of the sound change little with the volume; with the second, these characteristics have a higher variability. How, depends on the type of circuit. Nelson Pass, in a rather famous article wrote in 2008 (here), states about the 2nd and 3rd order distortions of a power stage by varying the input level:

I hope the explanation has been helpful in understanding one of the reasons that cause changes in sound characteristics with volume.
Last edited: Oct 3, 2021
You must log in or register to reply here.

Asking for input on a VST Harmonic Distortion plugin
2 3