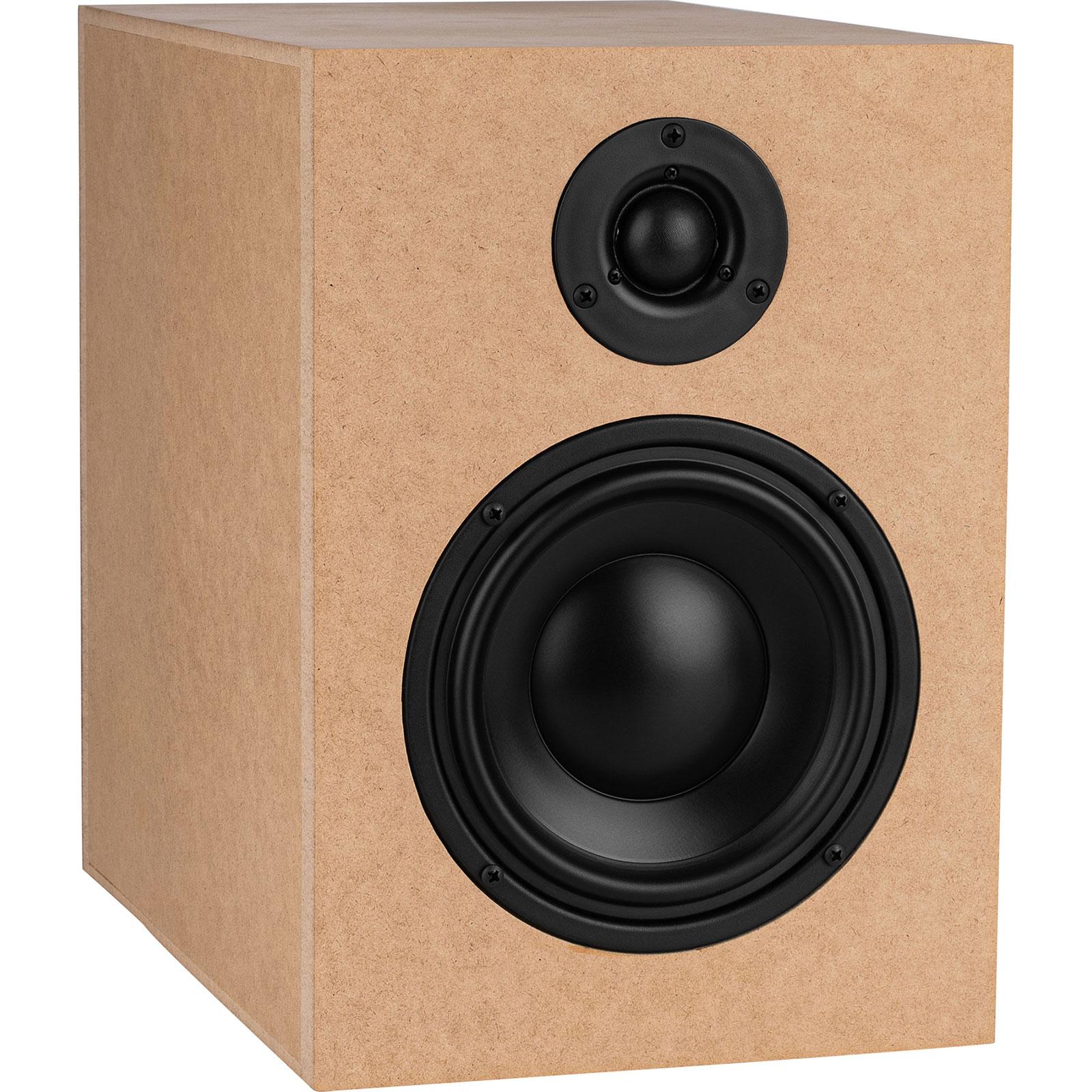 At $189 each, not much more than the Dayton Samba. The cabinet has some interesting bracing and a real crossover is included. Not sure about the (clearly budget) drivers as they appear to be new. Still nice to see another major drive supplier with a lower cost DIY offering.

The PE flat pack cabinets have been very good in my experience. Their cabinet guy knows what he is doing. I have generally liked Morel tweeters - not the lowest distortion, but smooth and well-behaved. I'm usually underwhelmed by their midwoofers. A lot of them have suspensions that make them want to bottom out if pushed. I don't have any experience with this newer, low cost driver, though.
"Keep an open mind, but don't let your brain fall out"

Out of stock currently.
R

That cabinet is nice with the extra bracing.
Model that woofer though and it doesn't impress in that box.
Low efficiency as well.
The Tweeter seems to cost almost twice as much as the similar Dayton ND-28f, the woofer also is priced alongside Wavecore and Ceramic SD acoustics stuff.
Someone modeled the crossover in a SIM and it shows little BSC so maybe good for an actual bookshelf but thin out on stands.
The driver is -3db at 65hz in that box & without BSC IDN...
It appears a sub is required. (which is fine by me as I vastly prefer sub and HP anyway.
Hmmm
Deff not exciting in my book at this point and really wanted it to be when I saw it listed up about a month ago. I almost bought it about 5 times in the last few weeks due to winter (I need a premade box in winter, no sawing outside, Minneapolis life) Lucky I held off as now it warm here and I can do something else more original with my tools.
IDN, maybe it performs better than I am guessing.
The proof is in the pudding.

As of now I'd much rather try the Samba although the Tango kit the Samba "replaced", had a very,very elevated treble (it seems designed to measure flat in room, I ended up taking the Tango apart and using the excellent drivers elsewhere.)
I have no idea if the Samba has been designed with the same Philosophy as the Tango was, I do know the Dayton RS drivers are excellent.

If someone wanted, with the Samba or even this morel, if the passive circuit design is off, it would be worth converting to a DIY active. Those Dayton drivers are so good for the low$ and the Morel ought to be at least decent as well.

PS someone said not in stock but shows in stock for me.

PSS all that said if someone(s) want to throw down I will build a pair to test here @ ASR (if Amir is interested)
Last edited: Mar 5, 2021
"The loudspeaker is by far the weakest link in the reproduction chain. Unless you have really poorly designed associated equipment you cannot get significant improvement in accuracy by going to very expensive equipment. Marketing departments like to tell you otherwise. Hearing a change is not an indication of greater accuracy. Some products are designed to make an audible change so the customer will notice it. Other products rely on the power of suggestion which works the better, the higher the price tag." -LINKWITZ