Hi all. Any reccommendations for fitering mains 50hz noise ? I need to have my laptops plugged into mains cos batteries are not good but I use the laptops for REW measurements with my MiniDSP2x4s and the noise is terrible when plugged in. I also have a probem with USB line/EMI noise but I know theres a good isolator for this (cost about £150 i think, need to find my bookmark but well known on here) but what can I do about the wall socket noise, are there off the shelf filters, as its only a laptop charger and do they actually work, any first hand experience of these ? Thanks

Most likely you have a ground loop. Best way to solve will be to eliminate that will be to break the loop.

Best way to do that will be optical connection from PC to DAC.
OP
M

I was concerned about the AC noise when actually ALL these issues can be solved with an isolator (another senior moment!)
Any reccommendations ? It doesn't have to be High Speed as Im not streaming just control purposes if not Ill trawl the net, thanks.

mamba76 said:
I was concerned about the AC noise when actually ALL these issues can be solved with an isolator (another senior moment!)
Any reccommendations ? It doesn't have to be High Speed as Im not streaming just control purposes if not Ill trawl the net, thanks.
Click to expand...

Sorry - I just use a usb sound device with optical out. Works for me.
OP
M

Mind giving us a rundown of the system as-is? That would make it easier to pinpoint the trouble spot(s).
My audio 'blogalike' | Audio DAC and ADC History | Helpful Audio-Related Calculators
OP
M

This was just one of the issues Im trying to sort out on my cars system. I started a thread more specific to my usage on AV Nirvana which has a diagram of how things are set up -

What souncards / setups are you using for REW measurements WITH loopback for timing ? (MiniDSP)

Hi all. Im always trying to improve my sound system in my car and Im unhappy with my analog external miditech3 soundcard setup I use for REW measurements. I would like to keep the noise floor as low as possible and ideally use optical feeds to the system so to avoid noise ito the DACs. I have a...

Maybe you could give it a look as I this thread/title is a bit specific about just the noise. Cheers 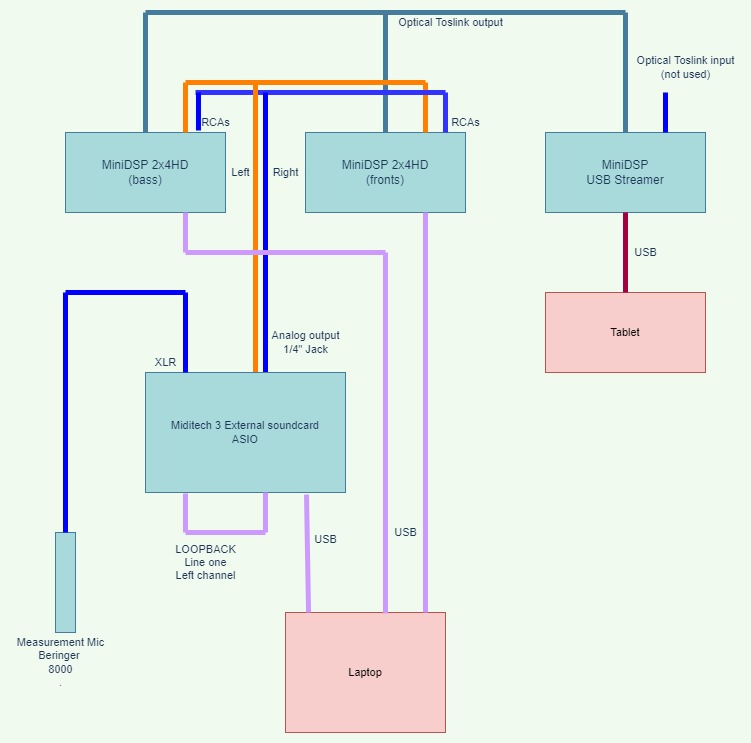 First question - why do you have 2 2x4HDs? If you have 2.1 or 2.2, then just one will do the job. And between the laptop, 2x4s, and the Miditech all interconnected via USB and RCA, you've set yourself up with multiple ground loops (at least 3).

You are also not showing your amplification here - which could well be another source of loops.

What is the purpose of the miditech? Other than for connecting the measurement Mic? And if that is what it is for, why the analogue connection to the 2x4's. How is the Miditech powered?

I think this is the interface we're talking about, it's bus-powered.

It'll be hard to get rid of the voltage drops related to the devices' power supply return currents, though better USB cables or plugging all three into a powered external USB hub may be worth a shot. That still leaves the issues resulting from sheer loop area.

With all unbalanced connections, this is a mess. I would at the very least unplug the USB connection for the MiniDSPs when not needed for changing their settings, that should resolve all major loops.
My audio 'blogalike' | Audio DAC and ADC History | Helpful Audio-Related Calculators
OP
M

All good questions and thanks for the interest. The Miditech soundcard, the laptop and all the connections to/from them are not normally connected. All this stuff is for making measurements with REW to setup up the system. This is a seven way system. 1x 13.5" sub, 2x 8" midbass, 2X mid range and 2x tweeters. Without all this connected the system itself is fine (maybe some EMI on the speaker wires but this was unavoidable, for now its fine). There are 3amps. 1x for midbass, 1 for sub the other is 6 channel and does the front components, all JL audio XD series. Theres a signiture pic on AV Nirvana link above. The bigger picture is explained on that thread.

Half these problems, what this thread was for, is the 50hz hum noise when I plug the laptop into mains when my measurement gear is in use. I realise that Im gonna have to start trying USB isolators on the relevent cables which should solve this problem. The MiniDSPs themself both utulise a MiniDC isolator which powers the 2.5watt devices but when any other galvanic connection is made (like USB) it will pick up noise. Yes there is also noise introduced from the soundcard via 1) the USB connection and 2) the actual analog side of it, its rubbish really but I don't have the experiance to think of an alternative.
A simple USB mic, like the Umik, could be used but this doesn't use loopback timing for the impulse measurements, relying on REW's acoustic signal instead. I don't like that because its unreliable at the high frequencies plus Windows can be buggy with it.

I get overwelmed with inputs and outputs let alone what channel the loopback is on and don't fully understand ASIO yet, I just wing it till it works.
The MiniDSP has its own ASIO driver inside but don't ubderstand how / when this would be used. I hope this clears up most of it, fire away if you have any suggestions. Thanks

ps yes the miditech is bus powered, not sure of the current draw tho.

And which kit (including amps) have a ground connection in the mains supply? (Also I can't see any picture on AV nirvana that shows the amps.
OP
M

The only connection the entire system has to the mains is when I plug the laptop charger in (battery needs replacing)
Thats what I want to do, eliminate the analogue part and possibly utulise the optical USBstreamer but this requires I understand completely how REW is sending and receiving the packets of data via USB protocol and what clock is going to be used which will allow REW to compare the output signal to the input signal where the software can take over and calculate phase, amplitude and all sorts of things.
Im in the proccess of writing my own documentation that explains the flow of data so I can get my head round what is needed for a measurement system to work then I can explore other possible ways of achieving the same result, hopefully without passing any analog signals to the DACs.

Someone is gonna say 'just use the Unik-1 mic' if so id be interested in opinions that compare the two ? It seems alot more straight forward but can you still have loopback timing with the Umik-1 ?

The miditech sound card in my case might not be required, simplicity, no noise and loopback timing is what I want.

Sorry: The amps don't have a connection to the mains? The 2x4s don't?

You need to draw in the amps and mains connections - they are part of the system also. It is also important to know where physically they are connected. All in to the same wall socket, or spread about the room.

I can't answer your loopback question - I don't use it, but have effectively only done one REW setup.
OP
M

I did mention this is a car install ?
C

mamba76 said:
I did mention this is a car install ?
Click to expand...

Car? Are you connected to an inverter or direct 12v?

mamba76 said:
I did mention this is a car install ?
Click to expand...

That might be even worse - presumably everything is grounded to chassis.
OP
M

Ill report back once I receive the isolators

How about you pick up a replacement battery for the laptop as well.
Eliminating the source of your problem would be the best course of action.
2.2 - pCP/CDSP, M4, NC122MP, Diamond 12.2, SB1000 Pro
OP
M

You dont know how many hours I spend using REW! And because I now have 2 of minidsp 2x4HD's you really need two computers because the plugins are rubbish, you cant have 2 connected at the same time.
You must log in or register to reply here.

How is this possible? Shunyata power line filtering (with video)

Jun 7, 2022
ashaimeow
A
C
Need help choosing the best approach to getting the desired volume out of my laptop and adding a DAC