I see no crossover setting except for sub, not for the speakers themselves.
E

Overseas said:
I see no crossover setting except for sub, not for the speakers themselves.
Click to expand...

Yup. It has a fixed cross over AFAIK.

Overseas said:
I see no crossover setting except for sub, not for the speakers themselves.
Click to expand...

It's in the IOS app. See the screenshot here:

It is surprising that this is the first "non-exotic" stereo receiver to offer the roomEQ and bass management systems that are taken for granted in an AVR! With the retro look and bass management, I can't help but think of the Outlaw RR2160 (though I doubt Outlaw is much of a "blip" on Yamaha's...

diablo said:
The speaker has no pretensions to be a subwoofer so we assume the actual signal output is flat down to 10Hz or somesuch.

The first four measurements were just made using YPAO settings in the app, to check that the cutoffs at 60.90 and 200 worked. And they do.

Measurement 5 was with YPAO off, which disables the bass cut settings. The bass roll-off appears to be at 90Hz.

Measurement 6 was Pure Direct and shows roll-off starting at about 400Hz. So yes, you really need to adjust the sub to an appropriate value for that.
Click to expand...

Interesting! Thanks for doing that.

In a way, it makes sense. These crossover adjustments are done digitally, and Pure Direct is precisely made to bypass (most of?) the DSP.

It the sub have high level output (like REL) there is no problem for sub then.

I did the tests to check what was what with my setup. I have the 803 with Kef LS50 Metas and a Kef KC62 sub but though I've had them for a while I hadn't got round to setting them up properly.
I had considered high-level connection to the sub - but using the low level output and setting the KC62 at manual 90Hz seems to serve all purposes. I mainly use it in YPAO mode with settings for different listening positions, only occasionally in Pure Direct mode. For me the 803 is the best solution.
Last edited: Feb 8, 2022
Lounge - Yamaha RX-A2080 , XTZ 99.36, DDRC-24 Dirac, Musiccast surrounds, SVS 3000 Micro sub,KEF Q50A Atmos, Samsung Q90R
Home cinema - Yamaha RX-A8A,Sky Q, Nvidia Shield, Dirac DDRC88A, Panasonic UB820, XTZ 99.26/25 Mk II mains and centre, QAcoustics Concept 20 surrounds/rears, 4x PSB Imagine XA Atmos, SVS SB2000 Pro, Epson 9400 projector
Bedroom Yamaha R-N803D, Kef LS50 Meta, KC62 sub

diablo said:
I did the tests to check what was what with my setup. I have the 803 with Kef LS50 Metas and a Kef KC62 sub but though I've had them for a while I hadn't got round to setting them up properly.
I had considered high-level connection to the sub - but using the low level output and setting the KC62 at manual 90Hz seems to serve all purposes. I mainly use it in YPAO mode with settings for different listening positions, only occasionally in Pure Direct mode. For me the 803 is the best solution.
Click to expand...

So, I emailed Yamaha tech support. The response was "The Cut off frequency for the Subwoofer Output of the R-N803D is 90 Hz." and that "this is fixed whether pure direct is engaged or not".

Make of that what you will.

Jake Cushing said:
So, I emailed Yamaha tech support. The response was "The Cut off frequency for the Subwoofer Output of the R-N803D is 90 Hz." and that "this is fixed whether pure direct is engaged or not".

Make of that what you will.
Click to expand...

Dammit, I read your post just before I made my way to bed (was 2 in the morning here in England) - but I couldn't sleep for thinking about it.

So what if my R-N803D in the bedroom is faulty, and all the others cut at 90Hz in Pure Direct Mode? Well, being greedy, I have two 803s. My other one is used purely as a power amp for my lounge Dirac system. So decided to test that.

Not too much effort needed, I connected the lead to the sub at the back of the lounge to the sub-out of the 803 and put the test mike next to that sub. I changed the sub from LFE setting to max 200Hz roll-off.

I was unable to test the YPAO settings as I've never set them up on that 803. So I ran a sweep in normal mode which we'd expect to be 90Hz roll off. And it was, well nearly. Then the Pure Direct - 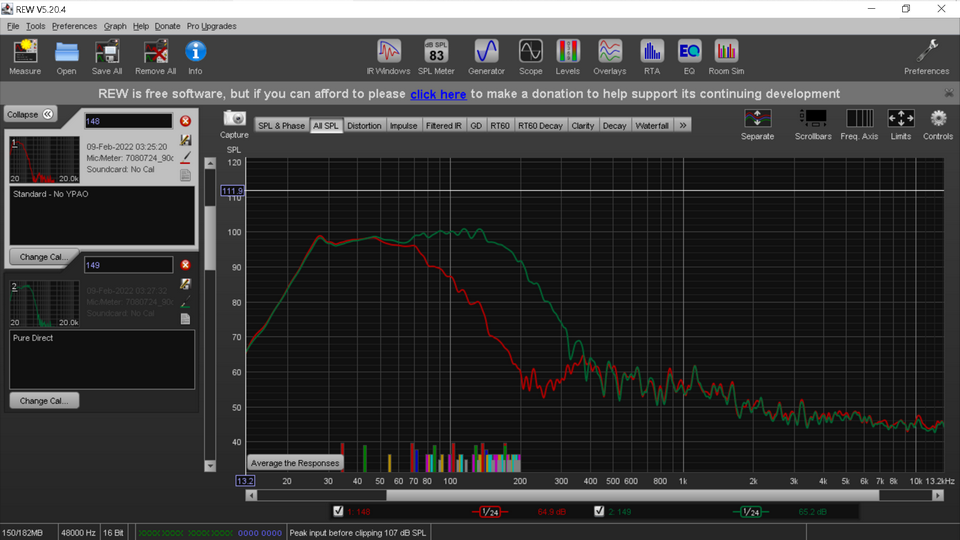 The green line graph is the Pure Direct. The sub itself is cutting it off I think - the signal itself probably remains higher than shown.

Now it may be that my two 803s are from the same faulty batch. Or that models made for different countries/voltages are different to the UK models. Or they may all do that and Yamaha made an error. Who knows?

If anyone out there from elsewhere in the world has one of these amps - and has REW and a microphone, I'd be grateful if you could run the same test.

How can I connect two subwoofers from the single output ? How is bassmanagment going to be handled ?

Blew said:
What's your subjective opinion of the YPAO mode? Do you hear much difference in noise and distortion over Pure Direct mode? Does the proper bass crossover make up for it?
Click to expand...

If you are still interested I am now able to give a meaningful reply. Although I've had my bedroom setup for quite a while I hadn't set it up properly. But after much messing around I now have the sub placed where it gves some decent output, though quite a few feet away from where it 'fits' best. Plus my Amazon Music HD sub expires soon and I have been comparing it against a free trial of Qobuz to see which to keep. I used the 802 setup for that so have also been comparing the various modes, Pure Direct, Ypao and normal.

Firstly, here are some sample graphs - 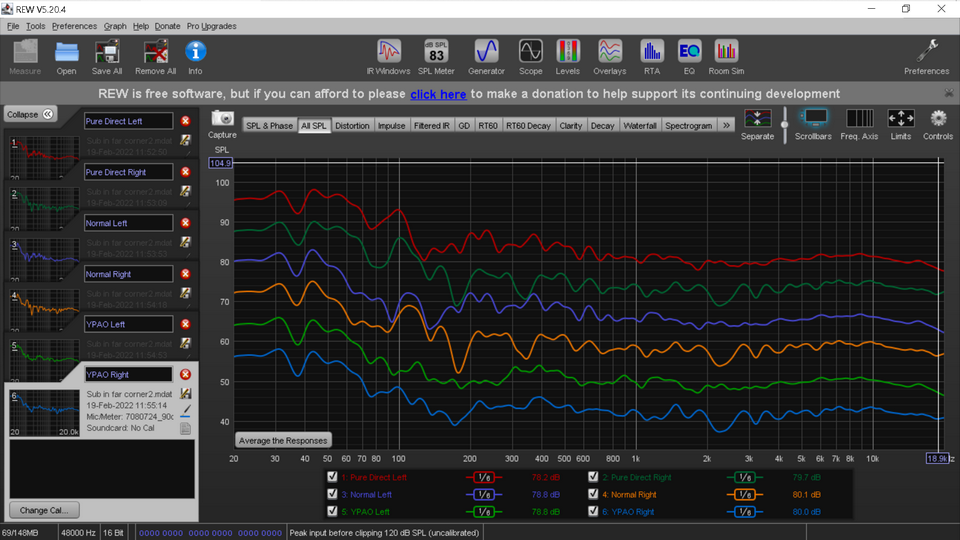 Shown spaced out for comparison, these are left/right speaker pairs, for Pure Direct, Normal and YPAO, as annotated in the chart. I have not shown a graph for the subwoofer alone, but it has a fairly smooth slope downwards to 90Hz, then rolls off rapidly at 24dB/octave.

The top two show left and right Pure Direct, and you may notice dips at 75/80 Hz. I think this is where the Kef LS50 Metas are slightly out of phase with the subwoofer. Subwoofers tend to take a few milliseconds longer to put out the signal than plain speakers do, so the sound arrives late. That's an advantage of YPAO, it delays the signal to main speakers until the sub has caught up. The Kef KC62 sub, although it has excellent drivers (for their small size) also has poor electronics - instead of a continuously variable phase control it only has 0 and 180 degree options. I tried the 180 degree phase change, but, instead of a dip, gave a huge peak instead.

The LS50s output falls off below 100Hz. I think that if you used speakers with more extended bass then that could cause more problems. Though it would help if the sub had a good phase control, or you used something on the sub like a MiniDSP 2x4 HD with phase control built in.

The graphs at the bottom show the YPAO output. And I'm very surprised at how good they are. Cleaned up the area between 80-500Hz quite nicely I think.

Unlike Yamaha multichannel AVRs there's no choice of YPAO high frequency slopes, or manual adjustment. So it's a good job I generally like 'flat'. And there are tone controls. But how different sounding are the Pure Direct, standard and YPAO ? Well, if I were in a double-blind test I'd probably fail to tell them apart. There are slight differences, but I'm not sure if the differences are better or worse. In fact, if I apply the 'psychoacoustic' smoothing to the graphs above they all look pretty good.

Reckon I'd make a really rubbish subjective hifi reviewer for the magazines or YouTube. Manufacturers wouldn't send me any free stuff to review.

So, I now have two of these units. I've been running one unit in a downstairs bedroom that's more of a music listening area. Using pure direct. With two stand-mount speakers whose bass is solid (Studio Electric).

Upstairs I have the same speakers built into a double-gyprock wall. It works great, but needs some EQ to reduce 80-100hz bloom. So up there I was using a Denon X-3700 AVR, because that unit has a built-in parametric EQ.

I noticed for a while that upstairs just sounded a bit 'rougher' than downstairs (though the bass reinforcement from the wall-mounting was also nice).

Now I've replaced the Denon upstairs with another R-N803, with an RME ADI-DAC2 FS doing the EQ work.

Without a shadow of a doubt, the sound is 'smoother' and nicer. There is no question at all. Dynamics are about the same. Though it feels more energetic, I'm using the RME's EQ to increase low bass levels. The Denon's EQ stops at 63Hz on the low end which was already too much boosted by the wall mounting.

Mind you, I didn't properly listen to the Denon in pure-direct mode before replacing with the Yamaha and RME combo. So I don't know if the difference is the Yamaha itself, or the RME unit's DAC being superior to the Denon's, or the use of pure-direct, or all three factors.
Last edited: Feb 27, 2022
O

I also tested Y 803 vs Denon (pma 600ne) with several speakers, bookshelves or standfloors: Wfdale 9.1, Mission Qx1, Pylon Audio, Triangle, 3050i. Without exception, Y sounds better and even much better. Denon is much boomier and lacks detail. I even used an external DAC, Topping E30 with Denon and saw that part of the difference comes from Dac, but still the amplification raises other problems.

Any idea what to check or repair?
Everything else is working fine.
When i click on Net Radio there is no options:
Radio
Podcast

I use almost solely the Musiccast on smartphone. I think there were moments when radio froze, kind of. Shut everything down, then start again.

What is the headphone output performance of Yamaha R-N803(D)? Does anyone know? I can't find any proper measurements. Is it ok for Sennheiser H660s' and Hifiman Arya's?
You must log in or register to reply here.