What is Alan Shaw on about? (is "coloration" unmeasurable?)

It starts with this:

As the last person in the office today, I took a call from a consumer who had called earlier in the day but whoever he spoke to was not able to give him a meaningful answer. He was sufficiently motivated to give us another call and had pre-arranged a demo of Harbeth speakers next week. I'm glad that he did and only at the end of our 30 minute conversation did I tell him who I was. Something had brought our brand to his attention perhaps after many years of invisibility. I should have asked why.

In short, the issue was that he was listening in a room of approx. 3 x 3.5m, moderately furnished and damped, with good quality electronics and mainly CD as a source. He had owned (at least) two pairs of expensive speakers in the last couple of years, the most recent of which were giving him what he described as listening fatigue and which I gather he had purchased with an inadequate (or even no) prior audition.

The reason for posting this item is because although we spoke for half and hour, I am left with the feeling that we could have talked all day. He was an intelligent listener and the various points that I made to guide him elicited sensible, considered responses. This fatigue is clearly upsetting him.

The fundamental issue was - and I don't know why I am surprised about this - that he is unable to illuminate whether his listening fatigue was in the low, middle or high frequencies. Without this feedback, it is impossible to zoom in on specific issues which could contribute to his dissatisfaction, but his dissatisfaction was real and palpable. He was an avid collector with wide-ranging musical genres, but could name recordings which gave him particular pain, and I imagine that his ideal speaker would make those recordings tolerable. They seemed to greatly trouble him. The issue, of course, may be the recordings, about which nothing can be done. I suggested that he just give them away and be done with them, but I suspect that rather like a missing tooth filling, the tongue just cannot but seek it out.

Without explaining how I did my best to deconstruct his issues, I'm wondering if you recognise this situation, how you might explain it to a hifi dealer for a decent resolution, how you might scour the internet for prospective solutions and how stressed you might become.

I'd really like to understand what it is like to be in what seem to me, mental torture. Without the most basic personal tools to deconstruct sound into its broad-brush frequency components, I cannot begin to imagine how vulnerable the audiophile is to misguidance.
Click to expand...

So I suggest in-room measurements: 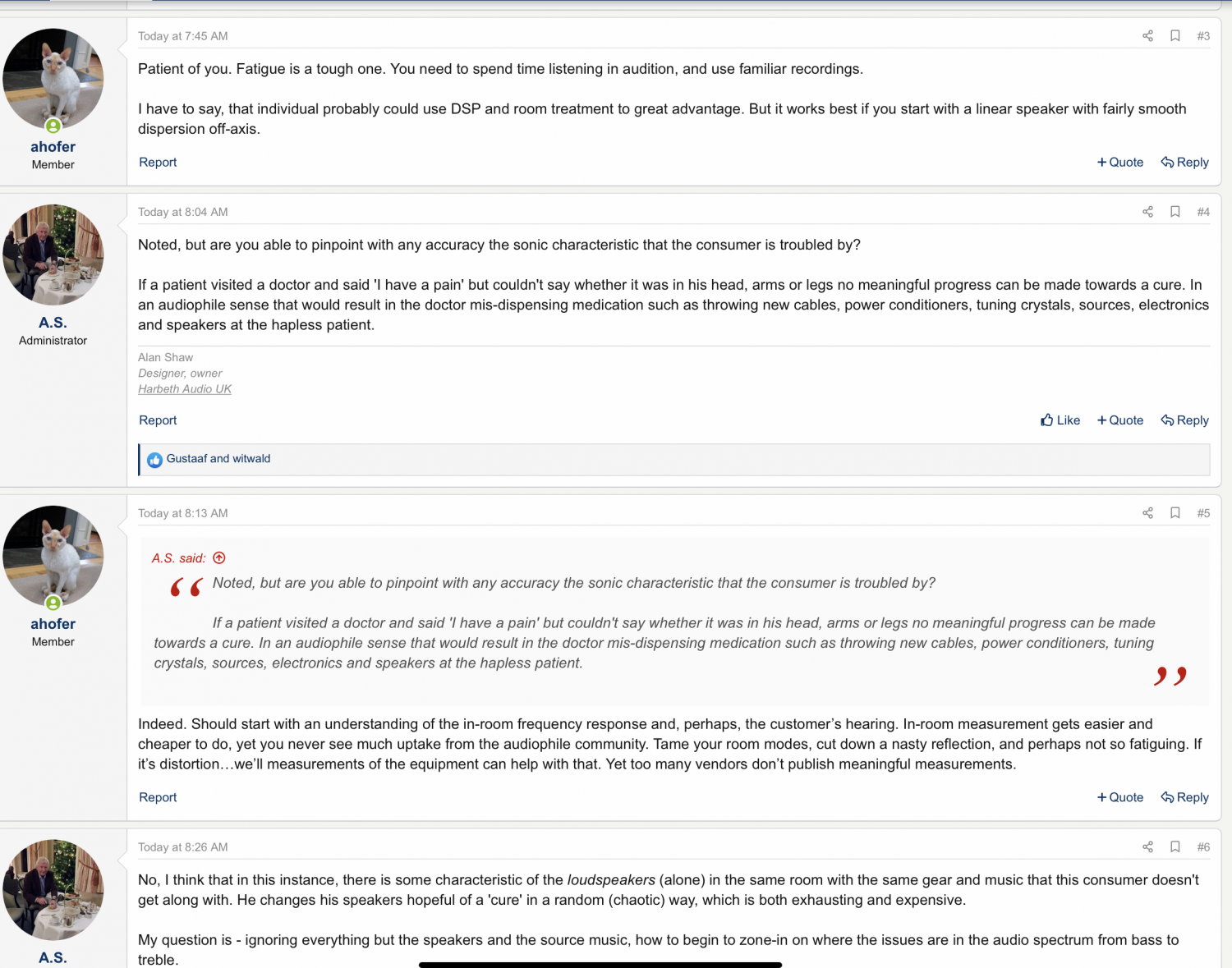 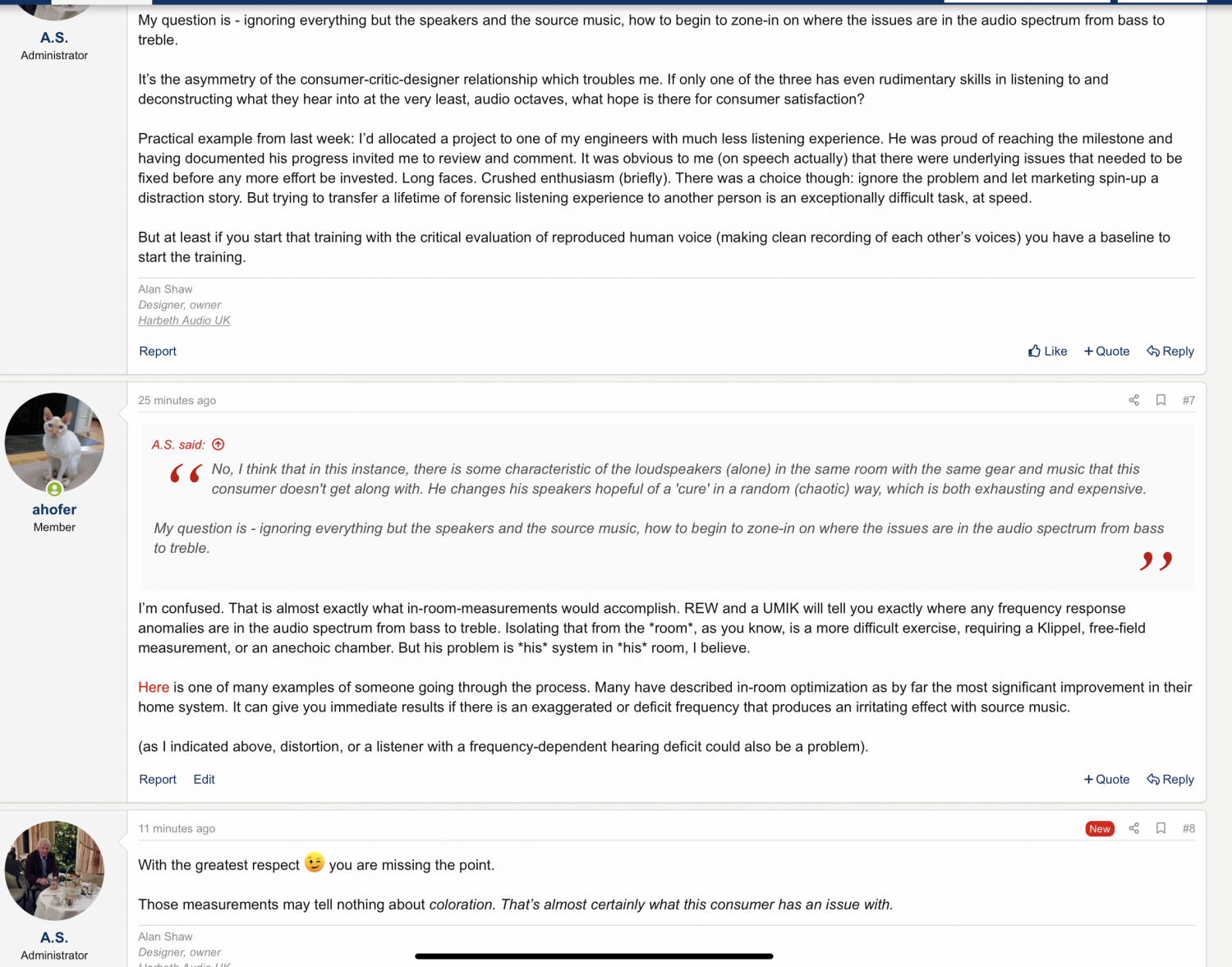 I’ve asked what is “coloration” that isn’t visible as frequency response or distortion (and how he is so sure that “coloration” is the culprit). Awaiting a response. Are we heading into the “unmeasurable”? Or am I missing something?
Last edited: Mar 12, 2022
"The thought you cannot think controls you more than thoughts you speak aloud. " - Eliezer Yudkowsky
J

I suspect you know where this is heading. Or rather where it's not heading. Your suggestions are clearly valid.

Question from my perspective is what's the appropriate way of dealing with someone who is evasive and condicending.

My advice for listiner fatigue is to listen to some cheap ear buds for a few weeks to get used to the sound.

"Objectivists vs. subjectivists discussions make me hungry. It's a medical condition."
OP

"The thought you cannot think controls you more than thoughts you speak aloud. " - Eliezer Yudkowsky
OP

"The thought you cannot think controls you more than thoughts you speak aloud. " - Eliezer Yudkowsky
OP

I admire Alan, but I still don't understand how "coloration" isn't frequency response or distortion
Last edited: Mar 12, 2022
"The thought you cannot think controls you more than thoughts you speak aloud. " - Eliezer Yudkowsky

Bizarre response from him, he can be so sensible at times, and others be like this. As I was reading through the opening section I was thinking, room mode, measure and fix it. It does seem a bit Maslow his thought process, give a man a speaker company and every problem looks like a sale.

Alan Shaw is not an engineer, at least according to his LinkedIn profile. He has some sort of certificate in marketing, and his early work background was in sales. So, because of his long tenure with Harbeth and his quite impressive accomplishments with that company, he gets to play an engineer (or, more politely, he's perceived as an engineer). But he's not.

I suspect the issue here is that he's absorbed a lot of information over the years about FR and directivity and most everything else about speakers qua speakers, and so he has a credible knowledge base from which to work as a self-taught speaker designer. But he probably doesn't understand much about room modes and DSP and anything else which basically requires having gone through all those engineering math courses to have the (for want of a better way of putting it) engineers' sense (I would call it a quantitative, mechanistic culture) of how and where to place/view this stuff when looking at audio from a 30,000 ft view, especially stuff that's not so much physically productized (tho of course it is, but as software).

I also get the sense that he suffers a bit from the "do you know who I am?" syndrome. This is a condition where people who are very successful and well known in one domain feel that they can tackle any new domain quickly and with similar success. (This is akin to all the doctors on twitter who have suddenly become expert epidemiologists. Thank god they don't try their hands at brain surgery) These folks also typically have a blind spot regarding not knowing what they don't know (h/t Donald Rumsfeld).

If a patient visited a doctor and said, "I have tingling in my toes," the doctor would know that one of the first things to do is investigate the lumbar spine. But then medicine generally tries to rely on science.

It sounds like he sets a lot of store on his 'forensic listening experience' and feels a little threatened by the idea that a few measurements with a calibrated microphone might be a better method of checking out a speaker. While it is possible to develop 'forensic' listening discrimination, this requires a lot of training that requires regular refreshes (like all training). You have to wonder whether his 'practical example' merely demonstrates that the hapless engineer who'd just completed the training was forming a more accurate picture than the old geezer who's a bit too sure of himself.
I

Interesting situation, particularly given the intensity of the guy's discomfort without being able to even begin to identify the cause. My best guess would be an unpleasant (but maybe not huge) room mode, which gives him a subliminal cringing-in-advance feeling, which I'm sure is mentally very fatiguing, because of a chronic inability to relax. Or, possibly, a hyper-sensitivity to high midrange, where human hearing is very acute. I have known a couple of people who suffer like that. They describe it like being hit in the forehead with a hammer. The solution there is also EQ, in the form of a deep scoop, like a super-BBC dip.

Often also the opposite can happen, too harsh and tiring mids and highs are then a result of some significant bass dips due to room acoustics and/or loudspeaker placement, don't ask me how I know.
Some comments from Floyd Toole about room curve targets, room EQ and more

We shall see how this goes:
(Update: to his credit he let it post). I really must send my SHL5+ to @hardisj

I’m still trying to get him to explain “coloration” if it isn’t frequency response or distortion. Any ideas?

...and it continues. He accuses me of ignoring the "core ethos". I don't get it. 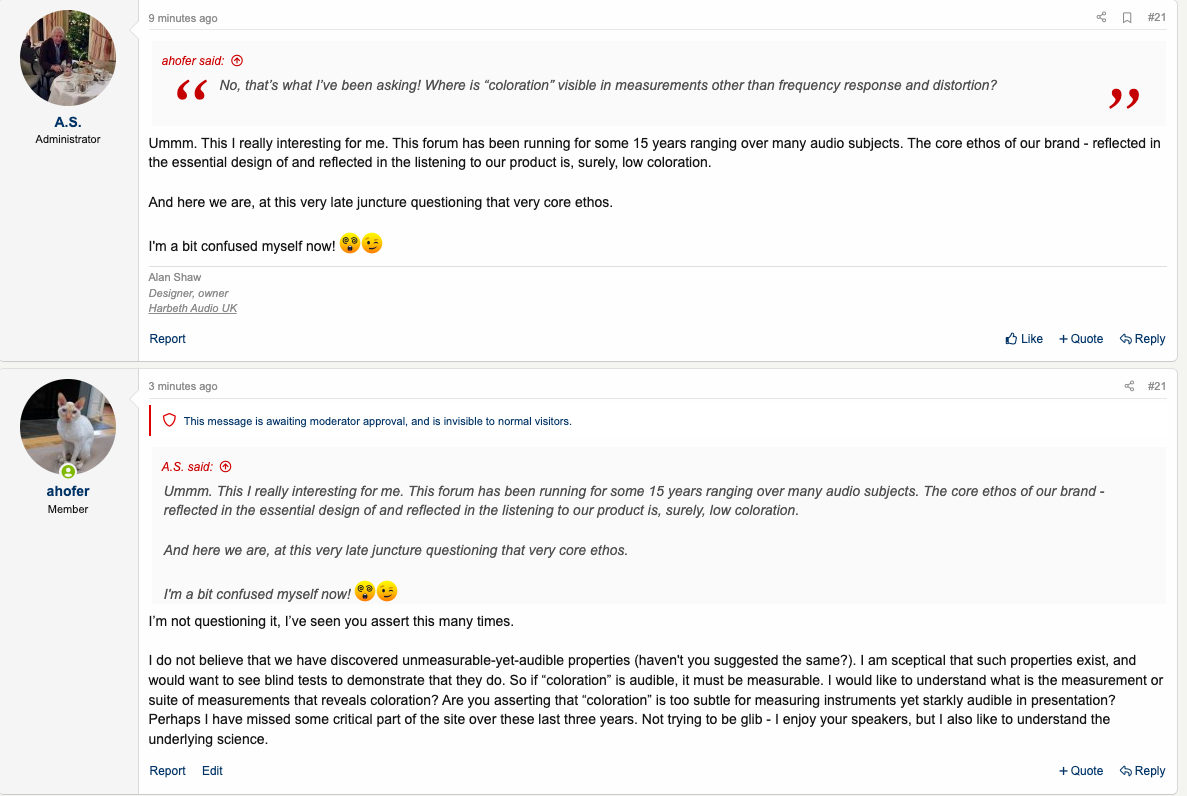 "The thought you cannot think controls you more than thoughts you speak aloud. " - Eliezer Yudkowsky

I've never thought of coloration as one measure that can have a number assigned to it, like distortion or so many dBs variation in frequency response. Rather, it is the result of several issues, that can be quantified individually. When I first learnt about these things, coloration was caused by distortion, frequency response variations, cabinet resonances and energy storage, and the effects of the room. Some are easy to measure, although may be hard to interpret, like a waterfall plot of resonances and energy storage. Room effects of course aren't a property of the loudspeaker, but of its environment, but nevertheless affect coloration as heard in normal use.

Those Harbeth 'speakers I've heard have been 'low coloration', but there's no specification for it and as such I think is unquantifiable as one number.

ahofer said:
We shall see how this goes:
(Update: to his credit he let it post). I really must send my SHL5+ to @hardisj
View attachment 191870
Click to expand...

I'd be interested in measurements of those, I've enjoyed listening to them when I've heard them.

If coloration has similar units as soundstage… Well, I wish you luck.

sergeauckland said:
When I first learnt about these things, coloration was caused by distortion, frequency response variations, cabinet resonances and energy storage, and the effects of the room.
Click to expand...

To my simple world view the NFS measures all of those, because it measures the speaker at all angles, any resonance will be measured as a contribution to the frequency response. Reading those measurements may take a well trained eye, something I think many of us don't have.

ahofer said:
I don't get it.
Click to expand...

Me neither. He's just dodging the question, borderline gaslighting.
How about:
"How do you define coloration of a sound system in a listening room and how would you go about measuring/quantifying it?"
You must log in or register to reply here.

Zen and the Art of Monkey Trap Maintenance