This is a review and detailed measurements of the Vanatoo Transparent Zero (T0) active speaker. It was kindly sent to me by the company. The T0 costs US $359 pair including free shipping from Amazon.

Little is ordinary about the shape and feature set of the T0: 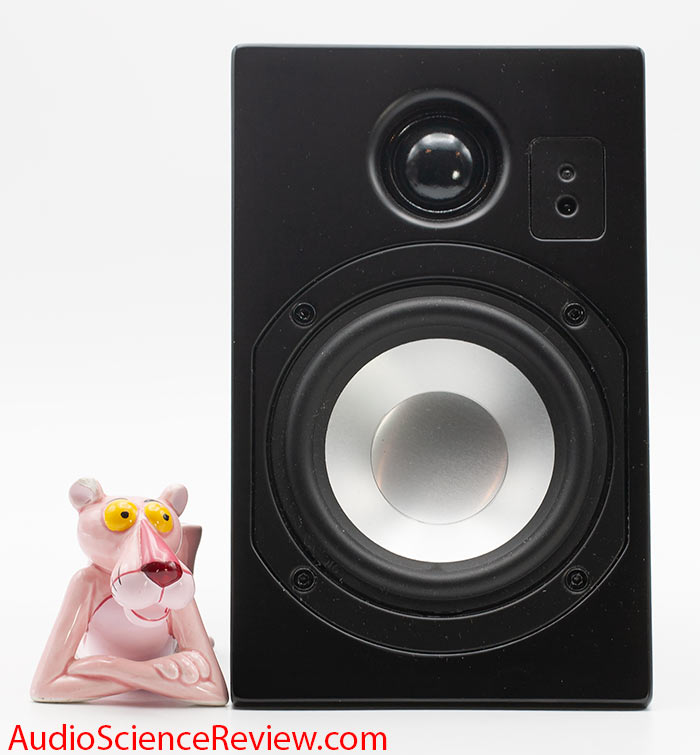 You can't see the difference in the above shot but you can with the rear view: 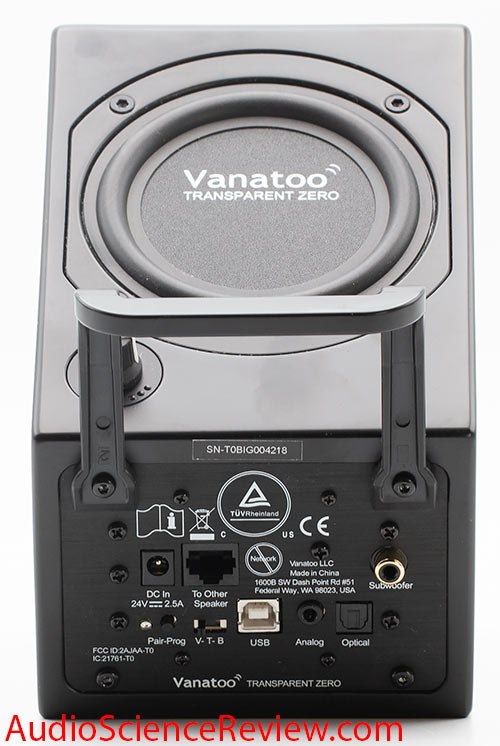 By default the unit has an acute tilt up angle but by reversing that handle, you can level it. I can't do justice to myriad of features in this speaker from built-in DAC to subwoofer filtering and DSP control for target curve and bass and treble. As usual my focus is on the performance of the unit.

For testing I used the above sample as you see, driving it through its 3.5mm analog input. It was a challenge to stand up the T0 on my measurement rig as the platform was not large enough for the handle to provide support. I did my best but I think the speaker was still titled back a few degrees. 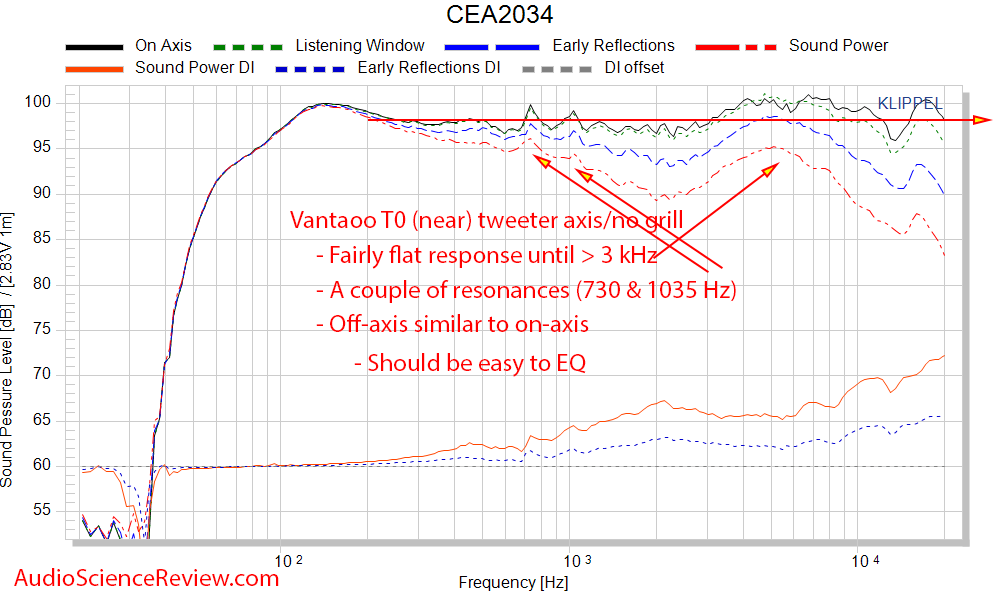 On-axis response which is so important in the performance of a speaker is actually quite good up to about 3 kHz (I don't mind the bass peaking). But then rises up as tweeter takes over. Company tells me this is a random sample pulled out and its tweeter is hotter than what it should be.

We have a couple of resonances around 730 and 1035 Hz as noted. These will appear again in some of the other measurements to follow.

Directivity meaning how good off-axis response is relative to on-axis is quite good. Look to the blue dashed line at the bottom on how smooth this is especially considering that there is now waveguide here. Early window graph demonstrates this fact: 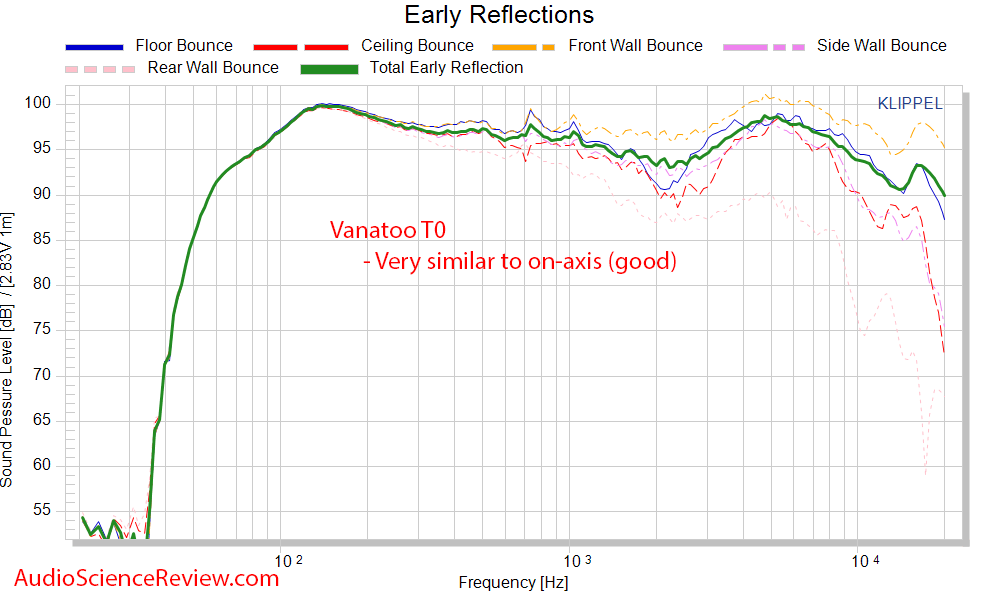 When on and off-axis are similar, speaker will be room friendly since reflections have the same tonality as the direct sound. And importantly, you can equalize the on-axis response knowing that off-axis will nicely take its lead.

Putting reflections and on-axis together, we get our predicted in-room response: 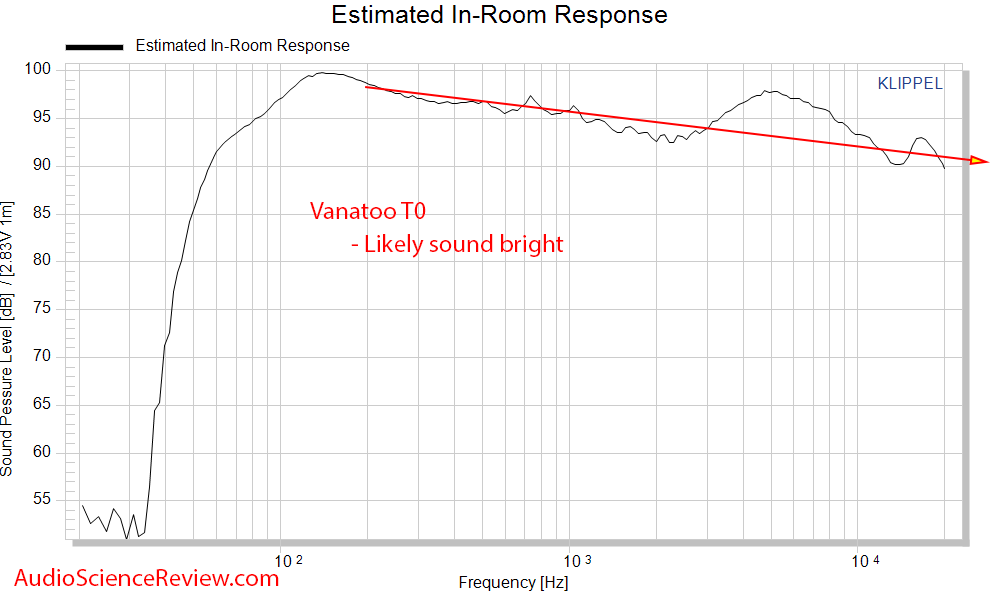 That broad hump will surely result in sound that is bright (some falsely call "detailed").

Distortion graph shows the woofer getting unhappy around the resonance point of 700 Hz as seen before: 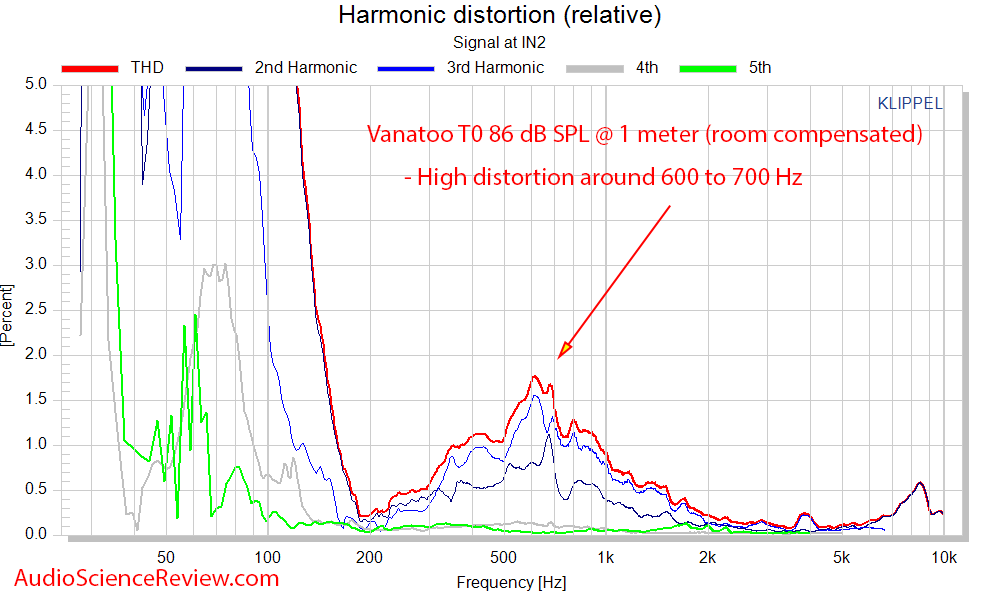 Looking at the distortion relative to tweeter axis response we get: 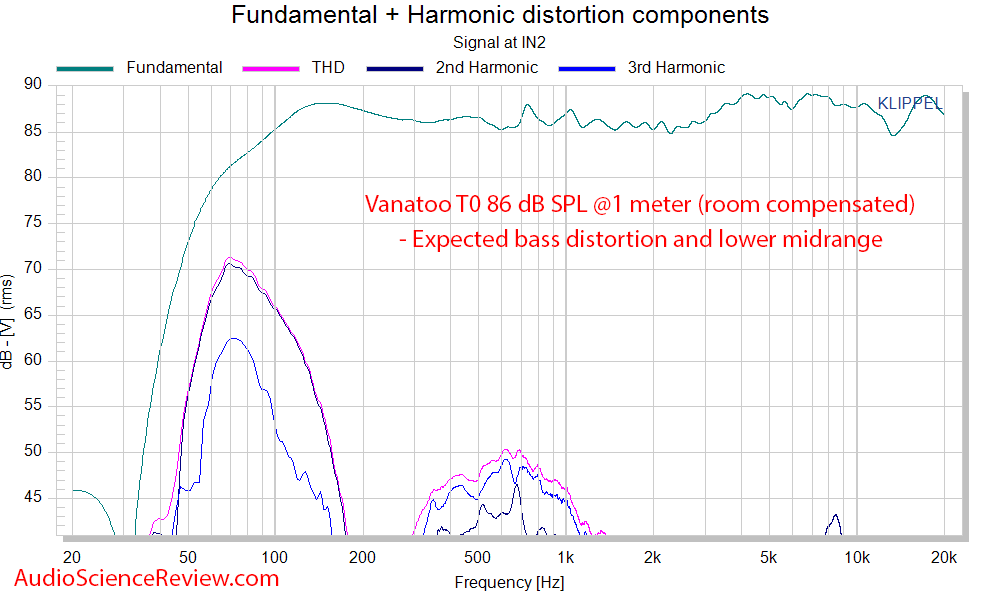 Given the limited power and small woofer one expects to see such distortion in bass frequencies. What I like to see is just blank past that but here, we get the rising distortion around 600 to 700 Hz. There is a solution to this though as I show in the listening tests.

I don't have 96 dB graphs since around 93 dB the speaker started to compress and reduce the bass output. By 96 dB, it nearly shut down with no usable output.

By compensating for room effect as with above graphs, we see what we already know in CSD and waterfall graph: 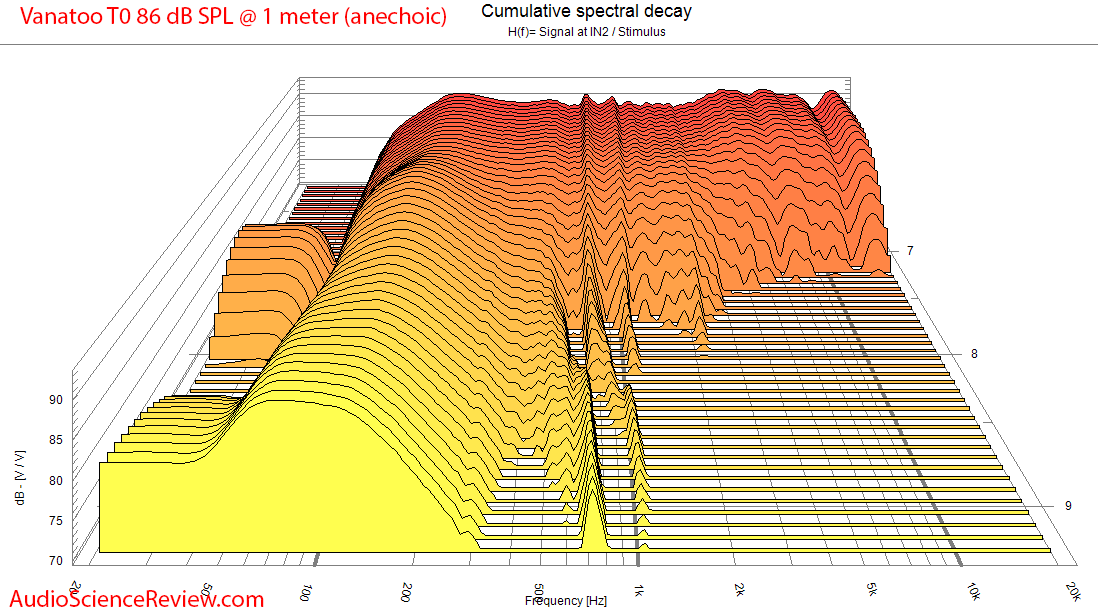 We see two resonances in time domain dragging on at 700 and 1 kHz as we see in the on-axis response.

Here are our directivity plots which show how I am off by a few degrees both horizontally and vertically (although not enough to impact what is measured):

Speaker Listening Tests
I must say, my first impression of the T0 on my desk in near-field was not good. I initially put the speaker on the table, slanted up as it comes. The sound was bright and not pleasant at all. I elevated it a few inches using my stand and this improved things a bit but brightness and lack of detail was an issue. So I went to work with parametric filters in Roon as such: 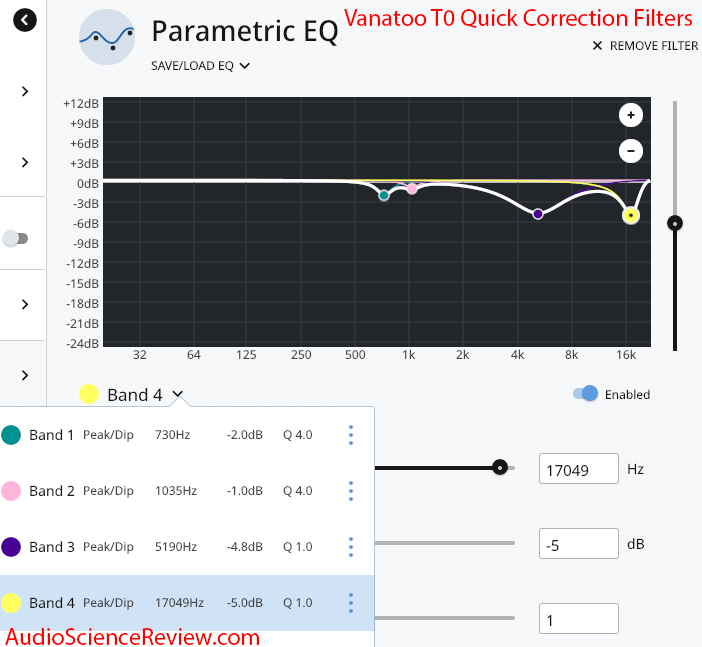 Band 1 and 2 nicely got rid of the resonances and with it came much better detail. Sharp notes floated in a more quiet background, no doubt due to reduction of distortion. While I placed these quite accurately using the frequencies from the measurements, the other two were more or less visual guesses. Band 3 was very important as it nicely took care of most of the sharpness. Band 4 was for that little peaking towards the end of the response and it helped a bit.

All up, the filter package made a remarkable difference. The sound was transformed to be much warmer, clean, detailed and pleasant. It was still a bit on the lighter side but there is so much you can do with a small speaker and available power.

Conclusions
Vantatoo brings great innovation in many aspects of the Transparent Zero speaker from connectivity to form and function. Our focus here though is pure audible performance and there, the graphs so clearly tell the story. A couple of resonances add significant distortion and the broad rise in treble makes things bright sounding. Thankfully due to nice directivity, both of these were addressed with equalization.

To be clear, I would not use these speakers if they come with the treble rise as shown. But if you apply equalization (at least with the treble control), then these are nice set of speakers and I can recommend them.

The price of meat has nearly doubled around here. Since that is all I feed the panthers, they are costing me a lot more than they did a few months back. So help me offset this added expense by donating using : https://www.audiosciencereview.com/forum/index.php?threads/how-to-support-audio-science-review.8150/

Nice, I’ve been looking forward to this review

Thanks Amir.
I think you've been very kind giving them a resting panther, given the amount of EQ needed to make them sound right. 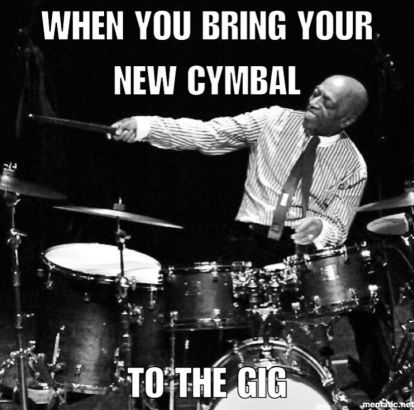 Considering they come with a very simple-to-use built-in EQ(switch the "VTB" switch to "T" position, use volume knob to tune, then press pair/prog button to save) I'm sort of curious if turning down the treble a bit also fixes the brightness, subjectively. I own these speakers and I tuned them that way when I bought them. To me their main distinction is their very tiny size(significantly smaller than the Neumann KH80, even) and great feature set.
Main: 5.1.4 3x Genelec 8351B, 2x 8341A, 4x Neumann KH80, SVS SB12-NSD, Denon X4500H/Shield TV Pro.

The pictures were so confusing I had to look them up at the manufacturer's website. Very interesting design. Too bad about the treble, will they send a new one to test? Because if that is solved it seems like a pretty nice speaker. Also surprised at how compact they are.
Last edited: May 31, 2020
"Human beings are poor examiners, subject to superstition, bias, prejudice and a profound tendency to see what they want to see rather than what is really there." - M. Scott Peck

Also worth noting for common folks that these are true bi-amped speakers (not very common among "personal monitors" designed as a pair, with main electronics in one speaker).
So you have 4 amps total like in proper "studio monitors" (one for each driver / 2 for tweeters + 2 for woofers). As opposed to, for example Presonus Eris E4.5, which have 2 amps total (one for a speaker, which powers both tweeter and woofer)

Hope Amir won't read it, cause the guy states som wicked personal opinion:
The Zero's don't play as low as or as loud, but they are built better and sound better than the JBL LSR305's to my ear.

Doesn't look worthy of such a pink panther, but well. That passive radiator looks badly implemented, as THD skyrockets at what looks like its tuning frequency.
Suckless music player: https://git.sr.ht/~q3cpma/mus

pavuol said:
Hope Amir won't read it, cause the guy states som wicked personal opinion:
The Zero's don't play as low as or as loud, but they are built better and sound better than the JBL LSR305's to my ear.

Sancus said:
Maybe everyone has forgotten that the LSR305 are similarly bright on axis, anechoically, lol.
Click to expand...

FWIW the comparison was to the original LSR305, not the MkII. Apparently the original has a much flatter frequency response.

daftcombo said:
Thanks Amir.
I think you've been very kind giving them a resting panther, given the amount of EQ needed to make them sound right.
Click to expand...

Also this way the panther rating is quite inconsistent to older reviews with much better measuring loudspeakers which didn't get the "listening with EQ" option.


q3cpma said:
Doesn't look worthy of such a pink panther, but well. That passive radiator looks badly implemented, as THD skyrockets at what looks like its tuning frequency.
Click to expand...

Fully agree, also directivity and voicing are off, so actually it fails in quite every measurement discipline.


Sancus said:
Maybe everyone has forgotten that the LSR305 are similarly bright on axis, anechoically, lol.
Click to expand...

The problem on the Vanatoo is that brightness on axis adds to the widening of the directivity at the region, giving that huge bump on the PIR that imho cannot really be corrected by EQing:

Some comments from Floyd Toole about room curve targets, room EQ and more

thewas_ said:
Also this way the panther rating is quite inconsistent to older reviews with much better measuring loudspeakers which didn't get the "listening with EQ" option.
Click to expand...

I agree with all your other points but honestly the panther rating has never been consistent. It has drifted pretty seriously with amplifiers and AVRs, as well, for example.
Main: 5.1.4 3x Genelec 8351B, 2x 8341A, 4x Neumann KH80, SVS SB12-NSD, Denon X4500H/Shield TV Pro.

thewas_ said:
Also this way the panther rating is quite inconsistent to older reviews with much better measuring loudspeakers which didn't get the "listening with EQ" option.
Click to expand...

Surely there isn't a soul who considers the coarse-grained panther rating anything other than a bit of subjective fun?

I have a soft toy walrus which sits on whatever speaker 'he' decides is his favourite. Sometimes the cat (Julio) will knock him off and drag him away.
Last edited: May 31, 2020
Ricky Roma: I subscribe to the law of contrary public opinion... If everyone thinks one thing, then I say, bet the other way...

q3cpma said:
Doesn't look worthy of such a pink panther, but well. That passive radiator looks badly implemented, as THD skyrockets at what looks like its tuning frequency.
Click to expand...

Doesn't the same happen with the Buchardt? Perhaps it's inherent of passive radiators to "resonate"?

Better to go for a sealed cabinet and a sub than adding a poorly-performing crutch...
"Science draws the wave, poetry fills it with water" - Teixeira Pascoaes

I have added the Vanatoo Transparent Zero to Loudspeaker Explorer where it can be compared to other speakers.

Good consistency within the listening window: 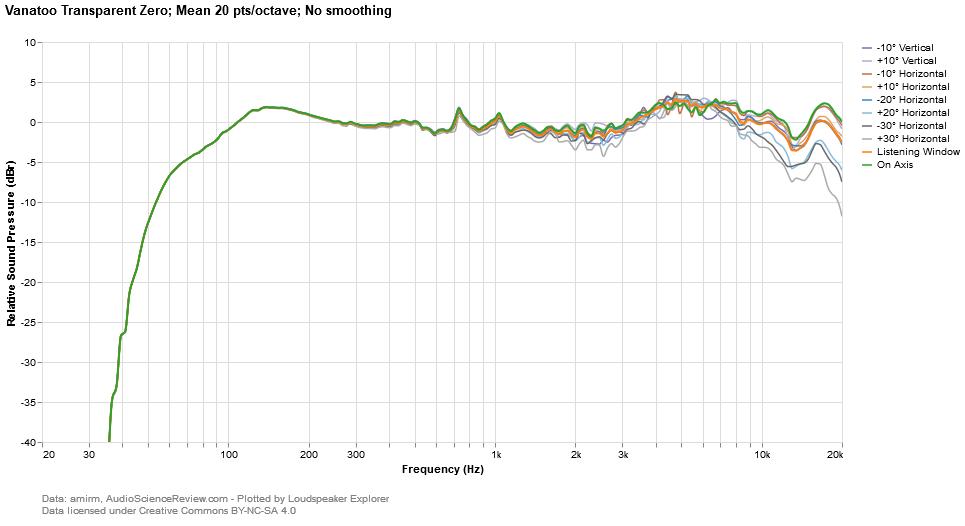 So this is recommended but Buchardt isn't.
M 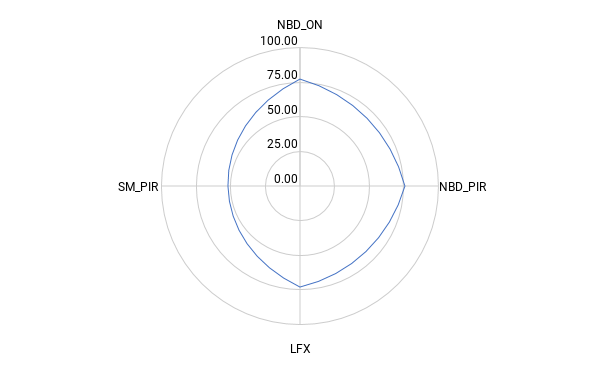 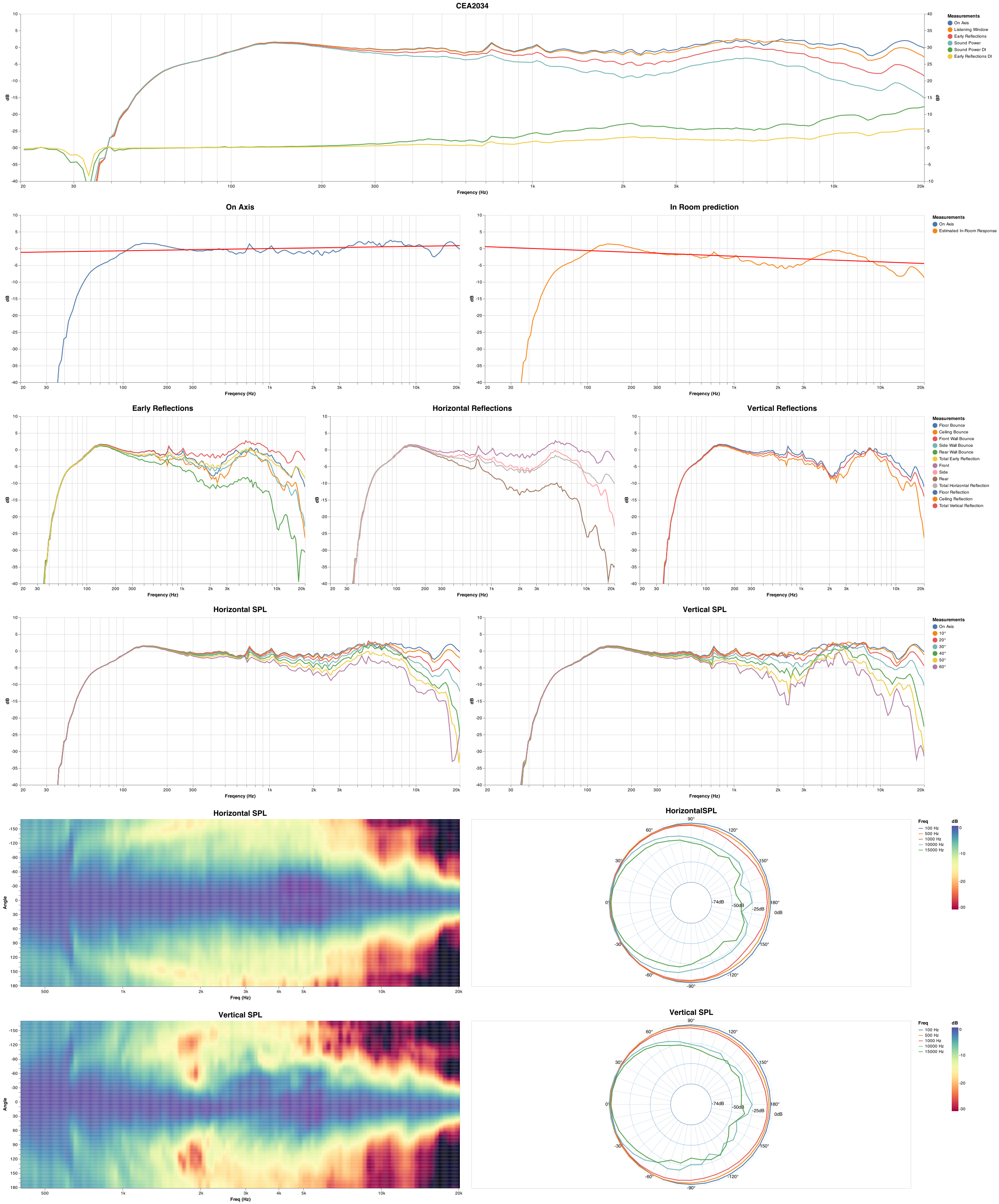