This is a performance test of the Schiit Saga pre-amplifier using two different tubes. The unit and extra tubes are on loan from kind member. See the review of Schiit Saga in parallel thread.

As I mentioned in the review of Saga, the stock tube is a Russian made clone of 6NS7 which goes by label of 68HC. The extra tube provided is from Raytheon and was made in USA. You can see them side-by-side here: 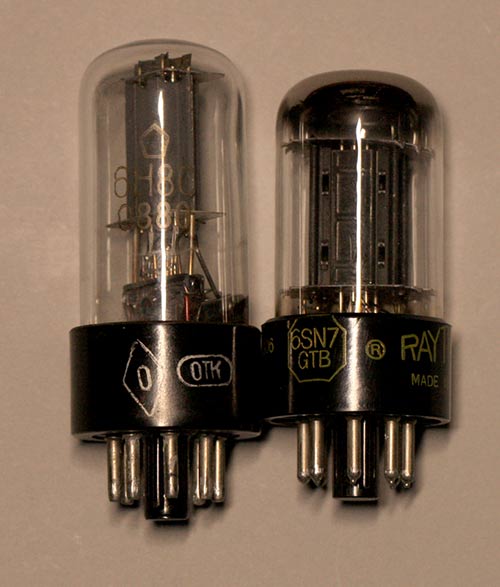 The 68HC is on the left and the Raytheon 6SN7 is on the right.

I did not repeat the measurements of 68HC. I just ran a few of the tests on 6SN7. So there be some variation in performance of the unit overall but hopefully that is lost in the noise, pun intended.

Let's get into measurements and see if our western, genuine 6SN7 delivers on its promise.

Measurements
As with the review, I started my testing by measuring warm-up performance stability: 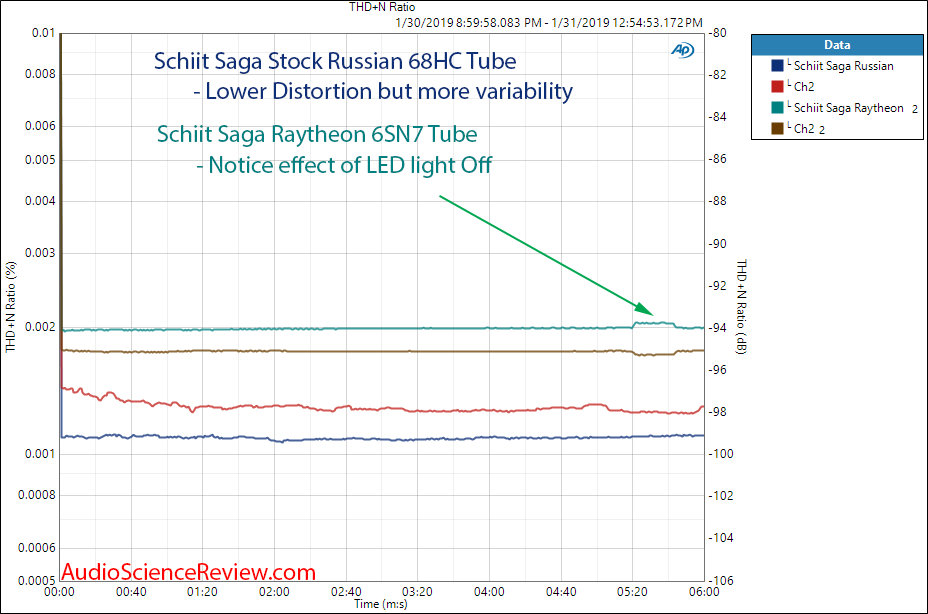 The top two lines are from Raytheon 6SN and the bottom two with 68HC. We see that the Raytheon tube actually has higher distortion! We will quantify that shortly.

On the positive side performance seems to be more stable with less deviation in the graph. Not that this matters much given the tiny variations at macro level.

During the measurement I realized my LED light was on. It was about a foot above the Schiit Saga. I usually turn it off during measurements but have not noticed it making a difference before. Here it did, causing one channel to get a bit worse but the other a bit better! Again, these are very tiny variations of no impact but shows how good our instrumentation is, and the fact that some interference is getting into the unit, perhaps coupling to the tube itself.

Before getting into the dashboard, here is how the stock 68HC did: 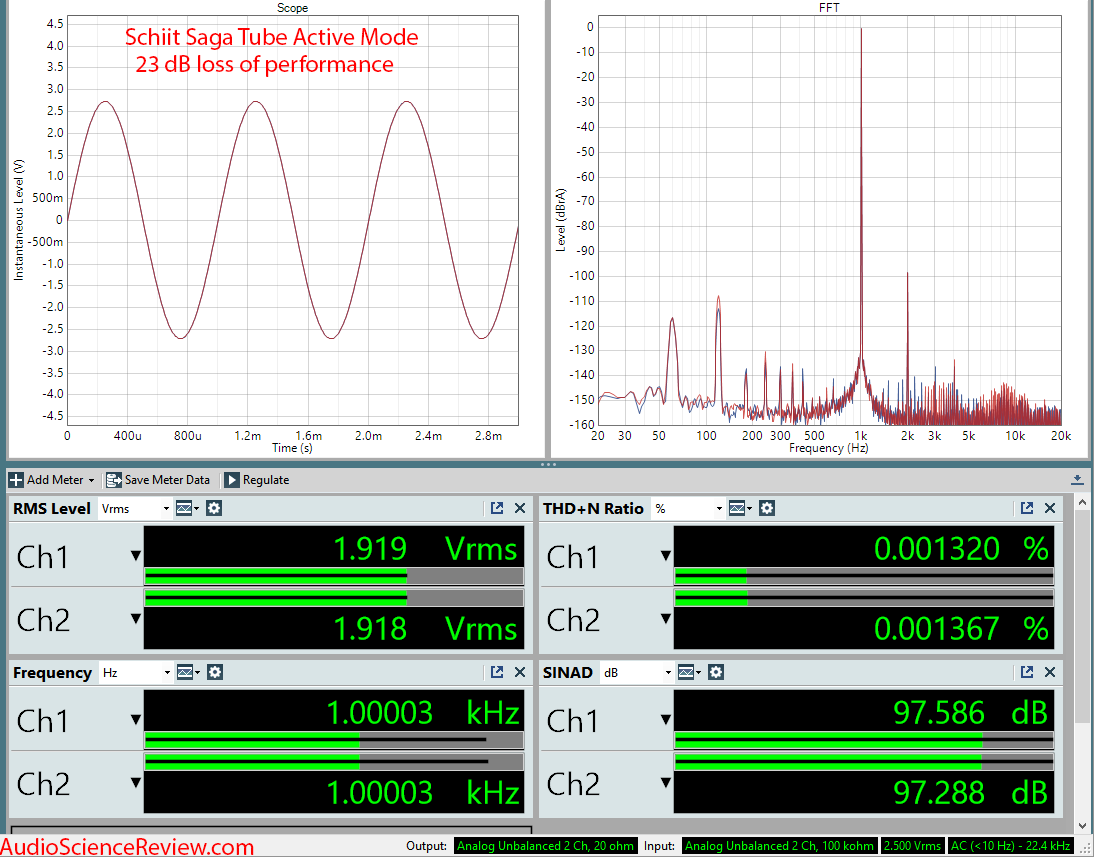 SINAD (signal over distortion and noise) is about 97.5 dB. Here is how the Raytheon tube did: 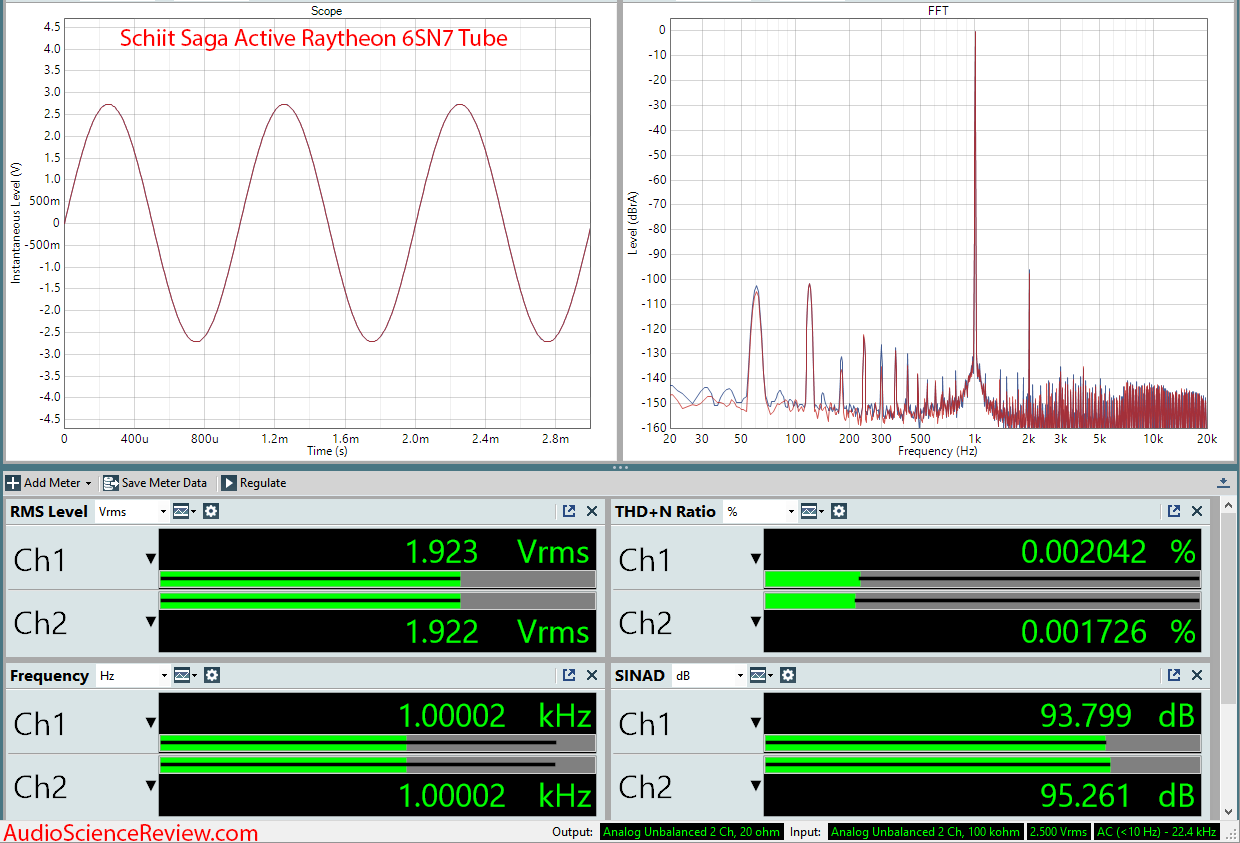 We lost almost 4 dB in one channel, and 2 dB in the other. This is visible in the second harmonic which peaks higher with the Raytheon 6SN7.

Conclusions
They say don't judge a book by its cover and that is true here. The so called "clone" tube did better than the brand name Raytheon. Of course hard to tell how much this correlates with a much larger sample of tubes. For now though, the measurements show a step backward so my recommendation to the owner is to keep the Russian tube and sell the Raytheon.

They say you should save money for a rainy day. It rains for about 6 months here so I need plenty of money!!! Please consider donating funds using:
Patreon: https://www.patreon.com/audiosciencereview), or
upgrading your membership here though Paypal (https://audiosciencereview.com/foru...eview-and-measurements.2164/page-3#post-59054).
Amir
Founder, Audio Science Review
Founder, Madrona Digital
Contributing Editor, Widescreen Review Magazine
Click for My Technical Background
Master List of Audio Reviews

Truth be told. I guess this proves tube rolling can have an effect, but it helps to have an AP on hand to measure the difference.

Meanwhile, every time I see "tube rolling" I think of a truck inner tube rolling down a hill to a river...
Insanity Is Doing the Same Thing Over and Over Again and Expecting Different Results

There's also the "upgrade" tube sold by Schiit which is a red base Tung-Sol.

Nonetheless, there's much better choices for cathode followers- the figures of merit are mu and transconductance, and 6SN7 is sort of middle of the road there. Its main merit is being able to swing moderately large voltages, which is not really relevant in this application. High gm triodes like 6DJ8/6922 will outperform a 6SN7 in this service, but are unfortunately not pin compatible. I suspect the 6SN7 was chosen for other than technical reasons.
“Emergencies” have always been the pretext on which the safeguards of individual liberty have eroded.”
― Friedrich Hayek

I'll chime in that I always understood "added noise" from a tube to be something "ideal" for some people. As the noise or distortion of the tube is second order harmonics which are "pleasant sounding"

I'm not one that enjoys... added noise beyond whats inherent to high performance tubes so I would certainly recommend the stock. I also happen to like "russian" tubes my self anyways. My point being, that I believe in Tube Land added noise/distortion isn't always a bad thing. The added but less varied distortion of the Raytheon may be what some people want in their system,


I would also advise that if your buying [and testing] tubes your purchasing 100%/100% models, as I've found subjectively tubes run alone in a dual triode configuration [so a single 6SN7] that have a variation on the output values for each triode often present a less precise stereo image and aren't as resolving at times. That 2dB SINAD reading difference is likely reflective of "slightly different" output values for each triode. Or it further reflects that output from both triodes within the tube isn't a perfect match. The stock Tubes output is more in line with what I'd want from a tube in my own system, it's not absolutely 100% but close enough as it's like a 99.7% match. VS the other which is around 98.4 and that small difference correlates to a 2DB SINAD difference which I'm sure by it self isn't audible but were going to amplify that single which will likely further add to the "difference" ultimately resulting in some small minor unwanted changes

An I'll further add that worry about these kinds of differences is usually only valid in hybrid systems using a single Dual Channel Triode tube, and it's possible all of mentioned is complete and utter bull schiit, as again I'm no expect and all of this is purely speculation based on my subjective experience.
Still it's nice to see some hard data supporting the changes the single Tube brings into the Saga's Performance

Spoiler to your spoiler- this is true for an open loop circuit run in grounded cathode. For use as a cathode follower or in other high feedback circuits, the variations are relatively unimportant- when you think about it, gm and mu for a triode might vary +/-10 to15% or so. By comparison, gm and idss of jFETs can vary 500-600% from device to device.
“Emergencies” have always been the pretext on which the safeguards of individual liberty have eroded.”
― Friedrich Hayek

SIY said:
Spoiler to your spoiler- this is true for an open loop circuit run in grounded cathode. For use as a cathode follower or in other high feedback circuits, the variations are relatively unimportant- when you think about it, gm and mu for a triode might vary +/-10 to15% or so. By comparison, gm and idss of jFETs can vary 500-600% from device to device.
Click to expand...
Cool thank you for the response! I've also heard that in those multi tube'd devices [or other's designed as such] the circuit is designed in such a way that as you said the variations are relatively un-important!
R

I did not try the Russian 68HC with my Saga but spent the extra $25 for the Russian Tung Sol 6SN7GTB. The new production Tung Sol sound nothing like the US made Tung Sol 6SN7GT from the early 1940's. You get what you pay for. The new tube has a noticeably warm midrange that is probably appealing to someone who wants a change from passive mode and expects tubes to sound "warm".

When I switch from passive mode to active tube mode I do not want to hear a change in tonal balance, warm midrange, bloated bass or recessed highs. I expect a good tube to instead just open up the soundstage, provide better imaging detail and sense of realism. I get that with the 1950's Sylvania 6SN7GT and the 1940's Tung Sol 6SN7GT. Haven't heard the Raytheon 6SN7GTB, never considered one because the later GTA and GTB tubes are not as well regarded as the earlier GTs.
"Not all that matters can be measured. Not all that can be measured matters." - J. Novick

If you expect that out of a tube, you'll get that- assuming you peek. If you test ears-only and level matched, you're not likely to hear a difference.

Much placebo.
“Emergencies” have always been the pretext on which the safeguards of individual liberty have eroded.”
― Friedrich Hayek

Not bad measurements for rancid toobs. I always found the Russian 6sn7's fine for the installations where I used them. Also, Chinese cheap as chips 6sl7's sound quite good to me. I have some Tung Sols, and they sound good, with a bit of lower midrange/upper bass beer belly, which is the charm, I suppose.

I think the Russian and Chinese tubes have batch variation, but you can buy several and test/listen to find the best ones because they aren't the insanely expensive 'phile tubes.
I would rather be called a fool by objectivists telling me I don't hear something that I think I hear over being called a fool by pie in the sky audiophiles who peacock expensive audio jewelry telling me that I should be hearing something that I don't hear.

How could changing the tubes affect the frequency response in the midrange? Can I assume that the comparisons weren't level-matched?
“Emergencies” have always been the pretext on which the safeguards of individual liberty have eroded.”
― Friedrich Hayek

I have ever had only one harmonic enhancer, the PrimaLuna Prologue 3 preamp with two 5AR4, two 12AX7, two 12AU7 . It has nice H2 weighted 0.1% distortion and it works as source switch and volume control before my SS or ICEpower amps, in my #2 setup. I must say, that it adds just the right amount of warmth! Switching power amp class A, AB or D after it doesn't change the sound, to my aged ears. 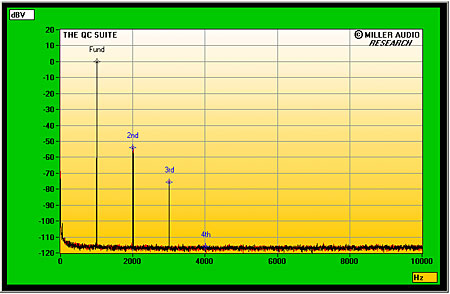 Somewhere else I read about an integrated amp to have selector for high or low NFB/damping factor, low giving more distortion and warmth. This would be a nice feature, just like with Schiit Saga pure/tube. Just for fun!
Last edited: Feb 1, 2019
!t's Got to Be Purrfic!
S

I have the 68HC which I bought for a McDonald's meal.
It owns a lot of NOS tubes.
L

I really like seeing you do measurements of tubes!
OP

That led light noise is strange, i had pair of "lab quality, government sealed boxes from 1975" Mullard EF37A's and they picked noise from plasma television nearby...

Thanks for the tube tests
OP

amirm said:
The former is what I thought I tried with the DarkVoice and it hummed like crazy.
Click to expand...
Really? I have used them last two years and haven't had any problems with TungSols.
Kept them as my spare tubes when i moved on to Psvane "globe" and 181-Z.

Hard to say, just my 2c about TungSols.