These fit the bill judging by the measurements and review Heco 1000 review by AH.

ZolaIII said:
I got it the first time that's why I shown even tiny ones that can do it. Yours whose more like Build Me a Woman.
Click to expand...

delta76 said:
Way way over the budget though
Click to expand...

In Germany the Direkt is selling new for 1500 or a little less a pair even on Ebay,better deals can be negotiable
C

mvnchies said:
I'm not too fussed about bass, to be entirely honest... it's just the Diamond 12.0 are a bit lacking... I thought 40 Hz -6dB wouldn't be too hard, or maybe I misunderstood the specifications somewhat. I have my bass shelved down to the lowest octaves because I find it overwhelming when "flat" at under 30Hz.

ceiling mount is definitely not an option, unfortunately! I'm a bit too picky about the appearance of my living room and it would stick out a lot.


... wow, 1500 for those would be quite something! I do love my Focal headphones, the Clear... but these are almost 4500 euro here in Sweden. it would have to be a Very good deal, if shipping is to be included. looks really good though, just unsure what this means:

https://www.audiosciencereview.com/forum/index.php?attachments/screenshot_20191006-212349_drive-jpg.35318/
looks like it would be a *LOT* of mid-bass there. am I mis-reading it or is the measurement not very accurate?
also, would Aria 936 be a lot worse? I see it has 3 drivers instead of 2 big ones... or 926 as you said!
I'll have to research these more - they look so much more affordable over in Focal-land! even if price is per speaker.

I feel like I'm missing something with these photos... going from tiny diamond 12.0 to towers?

I did but it sounded very bad, that's why I added a subwoofer - it's only a cheap 10" subwoofer though. and I have it dialled down so much it's just there to fill in some missing parts... not so much to rumble and shake stuff around, I don't really enjoy that part much.

thank you, I do hope to get tower speakers though, for maybe silly reasons but... it would feel better for me

these look gigantic and probably output a lot more bass than I would need... and well, as said below, price is a little out of budget!
very cool design though.

interesting, these are some I have never seen before. will try to read up on them and look for some measurements.


We do have monoprice.eu - but two subwoofers with good bookshelf speakers would end up costing a lot more... even if better, it seems!
I noticed some put "iso" stands between for stability and whatnot, and even those are pricy - which I'm not sure are needed though...

I would definitely prefer towers but I'll give it a real consideration if I can make it work... adding another Monoprice sub is already €750 there, making the 2 subwoofers cost my entire budget alone.

Genelecs are really cool but - I wonder again if I'm misunderstanding the bass extension spec. at -6dB 40Hz I figured the "flat" point would be around 70Hz...
sorry if I am confusing everyone and asking for a lot when not really needing it.

Q750 are on sale for 1000 euro here right now though. I would love to see measurements of these as the coax driver is intriguing to me.

The Direkt are 1500 or below a pair in Germany on eBay.
R

Laserjock said:
Logical choice would be a pair of Wharfedale 12.3 or 12.4 since I’m assuming you like the sound of the 12.0

What height are your current stands?
Click to expand...

while I do like them, I think they are a little too polite and withdrawn when it comes to detail levels - and was hoping to get something a little bit of an upgrade.
I was considering it a lot though, given I can get a pair for only 700 shipped here - the 12.3 that is. and they claim 45Hz -3dB which would probably be plenty for me!

stands are 60cm in height, but I use some tiny bumpers to raise the front just a little bit as it is a bit low with the Diamond 12.0. seems to work OK.


delta76 said:
Check out https://audiosciencereview.com/foru...fi-anonymous-to-not-buy-focal-aria-948.23810/. My 948 is the first hifi speaker I own after a very long time, and I don't really have a reference point to compare, so I am absolutely biased. But it is lovely to look at and sounds great.
Click to expand...

hmm it seems my room might be more suited to the 926 according to that - but I'll have to read a bit more about them, they do look great though. cheers! 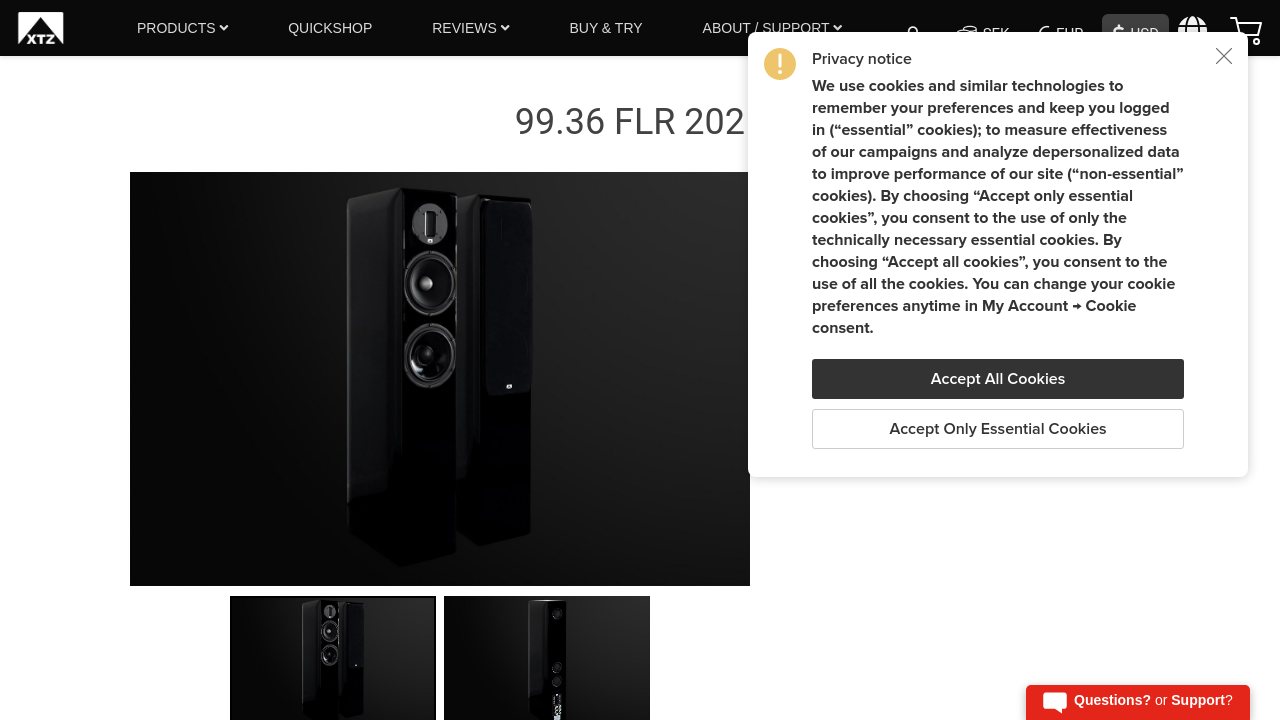 these look really interesting - I'm wondering one thing though... my experience with this kind of tweeter is that they are very 'beamy' and don't disperse the sound a lot. do you would you happen to know if this is true for these? tempting to try them, but might be a pain to actually return them.
thank you for the tip!

Chickasaw Mudpuppy said:
The Direkt are 1500 or below a pair in Germany on eBay.
Click to expand...

interesting - I see them for about 2000 here, used. they do seem huge though, not sure I can fit them unfortunately.
B

Imo an amt tweeter sounds great if a waveguide is used.

Maybe it's best to keep your eye open for a nice sale.
Just an example Elipson Prestige Facet 24F for 1320 euro.
Don't think they will ship it to Sweden for free though.

behappybevegan said:
Imo an amt tweeter sounds great if a waveguide is used.

Maybe it's best to keep your eye open for a nice sale.
Just an example Elipson Prestige Facet 24F for 1320 euro.
Don't think they will ship it to Sweden for free though.

We rarely got freeshipping from EU anyway. Some small stuffs are, but their markup would be insane . For big and heavy things like tower speakers, no chance
D

Circa 10 years old & discontinued - new they were quite a bargain in terms of value for money.

Used they are even more of a deal...

The current Anthony Gallo Strada speakers are the top end of the Reference 3.2/3.5, and the TR3 is basically the bottom end of the same speaker - reconfigured in a sub/satellite setup. (which might be a bit too expensive for you... but may have its advantages)

From the same family, used, The Reference AV were specifically designed for wall mounting - they go down to around 40Hz, and require a sub for full range - but again, the same tech and quality - may or may not suit your space/setup better.

These never sold very widely in Australia (where I am), and I came across them while walking past a showroom... what I heard as I walked past, sounded a heck of a lot like a well set up set of Electrostatics .... so I poked my head in, ended up buying the demo setup.

It replaced my all electrostatic setup, which was suffering from WAF.... and has been with me now for 10 years+

Difficulty - these are very very low distortion, very high detail, and once you get used to them, it is very hard to get subs that truly match them without sounding slightly "disconnected". (some people do not notice this, for me it was a big deal, this is also why I never took to the Martin Logan Hybrid ELS's with standard woofers.... the bass never sounded like it quite matched the mids and highs - lots of people love these...)

They are not hard to drive, but will absolutely show up whatever is plugged into them - a high quality 100W amp is more than ample - Quads own stereo amps are around 140W...

use the money get some PA reproduced sounding speakers for maybe same amount or less . ex used cinema JBL professional .
many on ebay cheap . i wouldn't touch rubbish hi-fi speakers with touching them with a barge pole .

^ look gander around ^ i can see at least dozens worth buying and you won't need any one of these rubbish hi-fi speakers laying on a floor . get some PA cinema raise them off the floor and aim the HF horn downward little and angle the horn toe-in so it beams best reproduced sound , after it has been EQ-tuned for the room and you just saved fortune or depending as some sellers overprice other honest sellers list realistic prices and look for good 100% feedback . 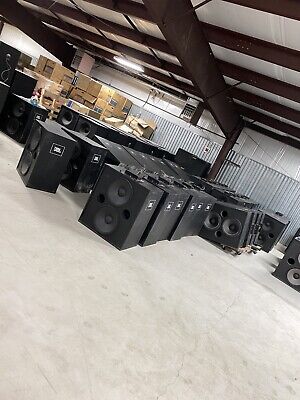 full listing for classic JBL 2360A horn look for best prices for budget believe me you'll find one . if you think i'm being snobby ? i ain't . i'm a common person . rich snobs well they have no automatic common sense and would spend tens of thousands on single pair of rubbish hi-fi speakers .

anyway PA speakers output far more dynamic range than some rubbish hi-fi speakers that look like tarts wearing too much make-up at hi-fi shop .
PA speakers are often black and often not really seen at night club and certainly not at cinema where hidden being the at-screen for double blind listening .

my room is smaller than you're room . so what is you're excuse for not getting JBL professional PA reproduction speakers ?
i like Cats. i don't like ASR members who don't
K

Chickasaw Mudpuppy said:
In Germany the Direkt is selling new for 1500 or a little less a pair even on Ebay,better deals can be negotiable
Click to expand...

Hasn't the Direkt series been discontinued? I'd like to find a pair of the Dreiklangs if I can even if I have to buy them in Germany or elsewhere in the EU.
C

Could try the Monitor Audio Silver series. Can definitely get the 300 size towers and can almost get the 500 size towers with that budget. Plenty of bass although I will concede that the Silvers I've demo'd have a bit too much port noise that clouds the bass accuracy. They provide foam plugs but that weakens the bass too much. I wish they would design a flared slot like Elac or the tractrix cone and flat slot on the Fyne's. Their new CCAM tweeter is nice though, listening to it right now on the Silver 100 7G.
B

get some bookshelf and a couple of 15" subs. it's gunna be awesome, but maybe not audiophile.
You must log in or register to reply here.

N
Anybody PREFER listening to music on bookshelves or tower speakers only (without the subwoofer)?

A
Which speaker should I get?