Will one, or all, of the well-known Asian manufacturers create a world-beating small amplifier in the near future? I know at least one rep from Topping has a presence on ASR, and we've seen the amplifier tests which have pointed out shortcomings of the widely-available small Asian amps. I hope that we will soon see these amps improve such that they impact the amplifier market the same way that DACs from these companies have.

The average consumer who can find an outstanding DAC for ~$100, and highly-regarded DSP monitors for less than $500, how about a small Topping or SMSL amp that aces measurements and makes the consumer question the wisdom of buying expensive amps. The next frontier...
W

Depends on your definition of world-beating

"Now, here's the deal: If I blindfolded you and had you listen to the amps in my collection right now -- the Almarro EL84 SEP stereo integrated with its punchy pace & rhythm and slightly dark & warm but naturally detailed soundstage; the emotive and musical Fi 2A3 SET monoblocks with their open, relaxed, dynamic and detailed sound; and the Yamamoto 45 SET stereo amplifier with its clean, clear, spacious, über-detailed and artfully musical sound -- and if after that, I slipped the T-amp into the mix and asked you to comment on its sound... what do you think you'd say? I guess it'd be close to what Bill said: "Its sonic signature reminds me most of the Yamamoto 45. It is clean-sounding with lots of detail and decent rhythm and pace. Not quite as smooth and musical but very good." When I told Bill and Pete that the T-amp cost a mere $39, they were flabbergasted. After I placed the T-amp into Bill's hands so he could "look" at it, he burst out in a marvelous laughter over its combination of light weight, small size and heavyweight performance."

"The proof is in the listening, however. And there the Sonic Impact T-amp is an absolutely brilliant piece of equipment that revolutionizes sound quality performance at a true budget price. Prior to the T-amp, a great-sounding $39 amplifier was unheard of. That makes the Sonic Impact unparalleled. Heck, even for $390, it would be unparalleled - it's simply a really great little amplifier. The li'l Sonic Impact T-rex just took a big bite out of High-End's pudgy fanny." 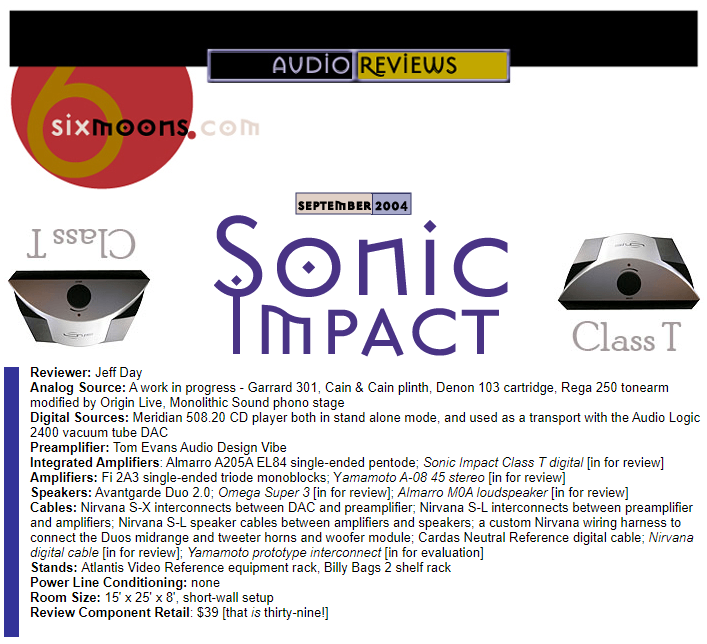 Honestly I don't think I can hear a difference between a TA2024 and Marantz's PM6005 in a double-blind unless I'm going really loud. Which makes sense since both amps are essentially perfect down to at least <-60dB

When performance becomes sufficient, the industry turns to focus on price instead. In the past a car that does 60km/h is more attractive than one that does 45km/h, but today a car that does 180km/h isn't much different from one that does 150km/h. Hence sound cards are a relic of the past, and the way things are looking amps may be next due to active speakers using the cheapest amps possible. Android phones are rarely doing better than 0.01% THD+N (although shout-out to Apple for targeting and managing below 0.001%) and nobody is complaining.

and makes the consumer question the wisdom of buying expensive amps
Click to expand...
Majority of the population wonder why audiophiles are even spending any money at all. Well there are some of us who prefer to listen to a flat FR at low distortion, but what is there beyond that? And to fix that the focus isn't on DACs or amps anyway.
Last edited: Mar 28, 2020
C

Well first they need to convince people that they're a better buy than pedestrian but solid A/B amps in the $300-600 range, nevermind amps $1k-$5k. To date these really cheap D chi-fi amps have the longevity of popcorn and the QA has been lousy out of the box. This is coming from someone who'd like them to succeed. Can they just make the solid amp of the WXA-50 without the streamer and for $150-200? I'd love to see it. An amp is not a dac and I'd hazard most dont want them as a disposable
You must log in or register to reply here.
Share: Facebook Google+ Reddit Pinterest Tumblr WhatsApp Email Link