To compare these high performance amplifiers driving Revel Salon2 speakers, I made measurements and recordings after swapping in each amp into the system, leaving every other aspect of the system unchanged. The LA90 was in low gain stereo mode, and the AHB2 was in its lowest gain stereo mode.

First, here are frequency responses, measured from about 6 feet away. The mic was at an arbitrary spot not in line with the speaker so response is fairly bumpy. 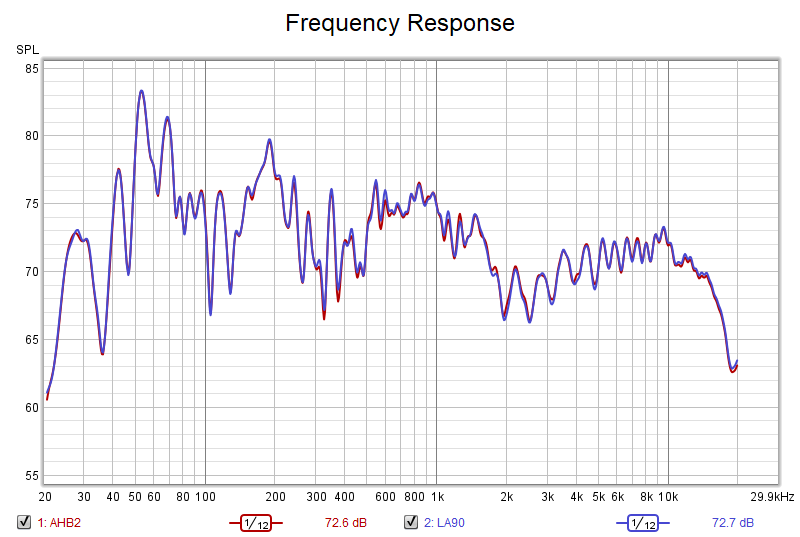 Output levels were matched and the mic was calibrated, so these were the actual decibel values, and each amp was outputting under 1 watt. If we zoom in we would be able to see some variation within about 0.6db between them, which is close to each measurement's natural variability. Some of the differences are repeatable and we could try to average more measurements, but in any case we wouldn't be able to determine audibility based on such minor differences. In published measurements the LA90 rolls off a tiny bit less near 20khz and that's visible here when zoomed in.

To test for audibility, I made stereo recordings by placing a pair of cardioid microphones, about 12 inches from each speaker's tweeter, recording the output of the speakers playing music. However, I'm only including the R channel here for reasons discussed later. The music is available free at 2l.no. The amps were level matched to within 0.5db at recording time, and then the recordings were further level matched in post to within 0.05db. There is some difference in low end rumble between the recordings, so to ensure such differences were factored out, I high passed each recording at 100hz 24db/octave. The resulting files are attached. Included is a second recording using LA90 of the same music to demonstrate the baseline noise in the recording process. These are the files I compared in the analyses below.

The DeltaWave program was used to analyze these files for relative differences, or deltas. The delta files are also attached. I've boosted both files by +29db, which makes them easier to hear. Here is a visualization of their waveforms:

The top waveform is the difference between the two successive recordings of LA90. This represents the baseline noise of the process, including ambient, mic, and ADC noise. We see that it's mainly noise, though the music can still be heard faintly, likely due to random fluctuations in room reflections. The bottom waveform is the difference between the two amps, and we see that it is higher in level. Music can be heard loud and clear. Difference captured between amps is clearly above the baseline noise of this comparison setup.

In published measurements, each amp has flat frequency response and SINAD above 113. Spectrum of the recordings' deltas includes all frequencies and is not fully explained by known rolloff differences at the extremities of 20hz and 20khz. In principle any other difference would be attributable only to effects of a nonzero output impedance, with each amp dragged off a voltage source ideal by the speaker load. In the published measurements, LA90's output impedance starts from 3 mohm below 1khz and rises to 40 mohm at 20khz. The AHB2's is much higher, starting at 20 mohm below 1khz rising to 150 mohm at 20khz.

To see what effect this had in practice, I measured voltages at the amp terminals when driving the speaker, feeding the voltages into a balanced ADC and using REW to measure frequency response: 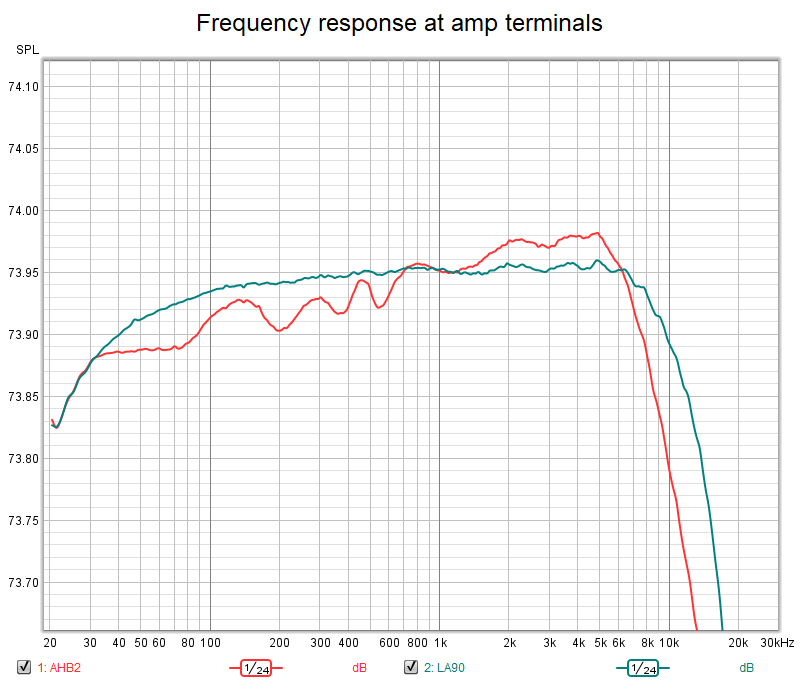 Note the tiny db scale in the y axis. That voltages deviate from flat is expected given nonzero output impedances. Also as expected, the LA90 rolls off less around 20khz, and since AHB2 has higher output impedance, its curve deviates more from flat. (Note that speaker terminals see the speaker cable as additional output impedance, so the same measurements made at speaker terminals would show wavier responses for both.) The AHB2's output tilts about 0.1db from 50hz to 5khz. In decibel math, a 0.1db difference (73.98dB - 73.88dB) is about -16db from signal level. The recording delta was around -29db, so this at least has the right order of magnitude to explain it.

Is this difference audible? I was not able to ABX a difference in Foobar between them, but I wouldn't rule it out completely. There is evidence in the literature that a tilt of 0.1-0.2db/octave is audible. The AHB2's slope is close to that in some regions. I'd be interested to see if anyone can distinguish a difference.

Extra info: I actually had a DIY Hypex NC122MP amp in this experiment, except I noticed a greater than expected deviation in its L channel's measured voltages, showing up in the sound deltas as a 0.6db upwards tilt between 200-2000hz versus the other amps. It was ABX audible. This was more deviation than expected given the NC122MP board's specified 3 mohms output impedance, so I checked the output connectors and found that indeed the L connector was loose and likely added output impedance. Fixing it afterwards erased the 0.6db tilt, but there was still a tiny difference in frequency response between L and R channels, when loaded. I think the output connectors, even after fixing, added unequal amounts of output impedance. Its R channel had delta files vs AHB2/LA90 at similar levels as between AHB2 and LA90. Nonetheless, this suggests my NC122MP build may not be representative of other builds, so I omitted NC122MP in the discussion above, and compared only R channels. Also this tells me that a spectral tilt of just 0.6db over 3 octaves may be audible. Later in a separate experiment I checked AHB2's and LA90's L/R channels using voltage measurements, and confirmed that they match much better, with their recording deltas falling beneath the noise level.

There is a tiny difference in output between Topping LA90 and Benchmark AHB2 at around -29db level, possibly due to differences in output impedance. Likely inaudible, but you can judge for yourself using the attached files.

This agrees with my immediate impression too.

The la90 …… With my 92db/watt speakers the bass is as deep, tuneful, fast, tight and punchy at reasonable volumes and with my 85 db/watt speakers, well, not so much, no surprise! Still delightful sound there too, only lacking in bottom end extension and punch.

The ahb2 very similar on the 92db/watt speakers (perhaps a blacker background), on the 85 db speakers…..a different story altogether. All the bass I could expect from those speakers. That, said the la90 still sounds very listenable driving the low efficiency units too (but for bottom end punch). I had considered a second la90 and perhaps some power supply upgrades (more capacitor values) but realized that the benchmark makes more sense here.

These amps both sound excellent in their element and really very similar in terms of transparency, speed, tunefulness and quiet background. Both are musical, open sounding low fatigue offerings that excel at their price point. Yes you can get more watts for your money (I have many such explorations here too) but ….. then there’s the music!

I might add that for reference my 300b coincident Frankenstein mk11 are in many regards rivalled in “musicality“ by either of these solid state offerings.

Both are are new purchases and neither will be exchanged for the foreseeable future.
C

You know I was just wondering the other day why more people dont do full system measurement/comparisons. It seems like it would be the best way to determine if your new/different piece of equipment makes any real difference in your complete system. This is as opposed to what we typical see with measurements in isolation.

Thanks for doing this test.
G

So what you are saying is that with the right speakers (reactive load), the slight differences in tilt approach the threshold of audibility? Amplifiers do sound different then

Nah that's just tubes...
You must log in or register to reply here.