This thread focuses on the technical look/side of Gran Turismo music, OST & Licensed. As audio lovers, we crave the best audio from our video games and sometimes we can understand when they can't. Polyphony Digital (Makers of GT) did offer OST CD's over the years, which it was lossless and of course it didn't include the full music. Gamers made tools to directly extract the audio from there game copies. I hope this thread helps GT gamers that have the lossless itch for years to come. 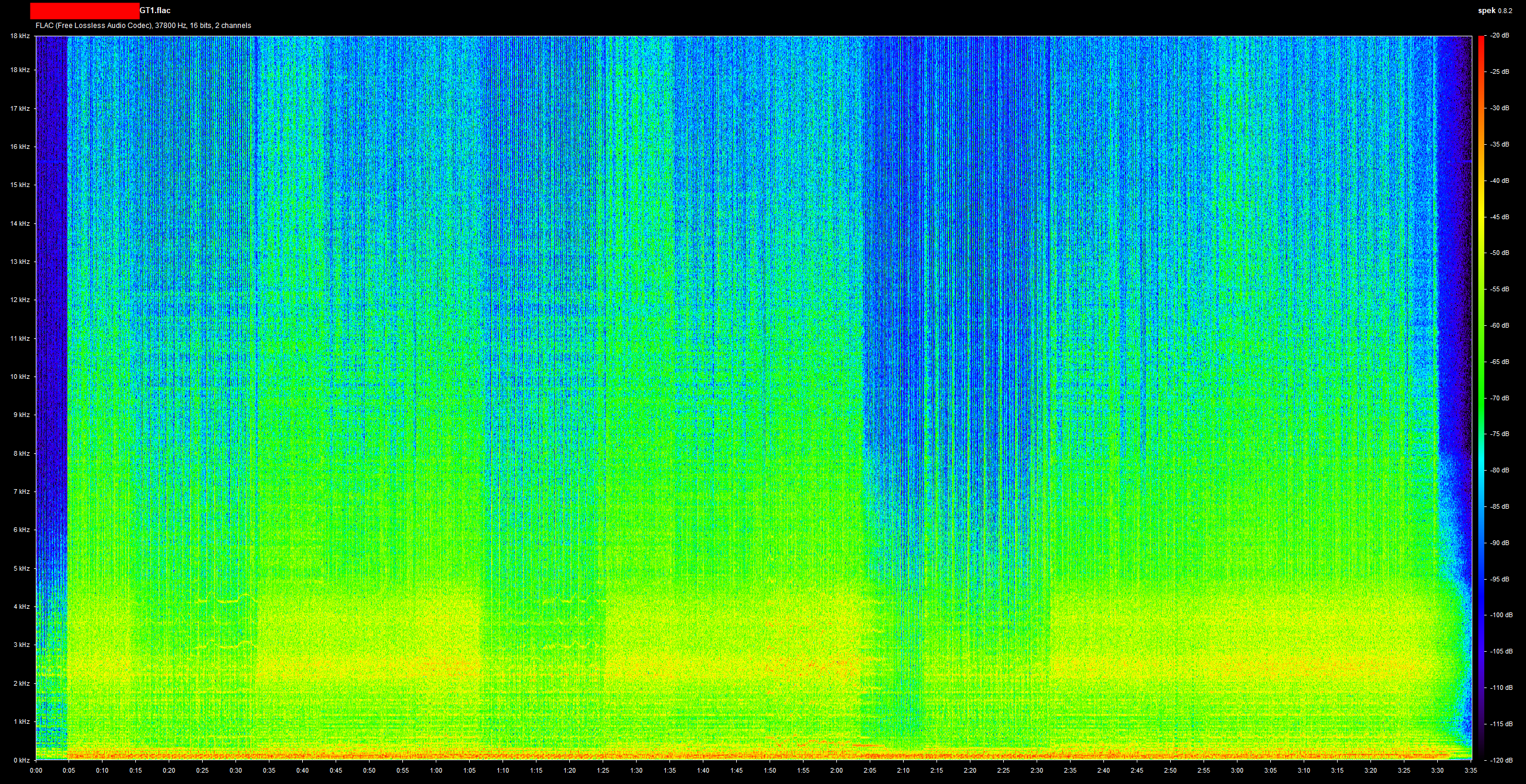 PS1 games generally used 37.8khz to 44.1khz. We do get peaks at the top with both frequencies although that doesn't mean its lossless. The music in this game would take up the whole disc (Data CD is 702MB). 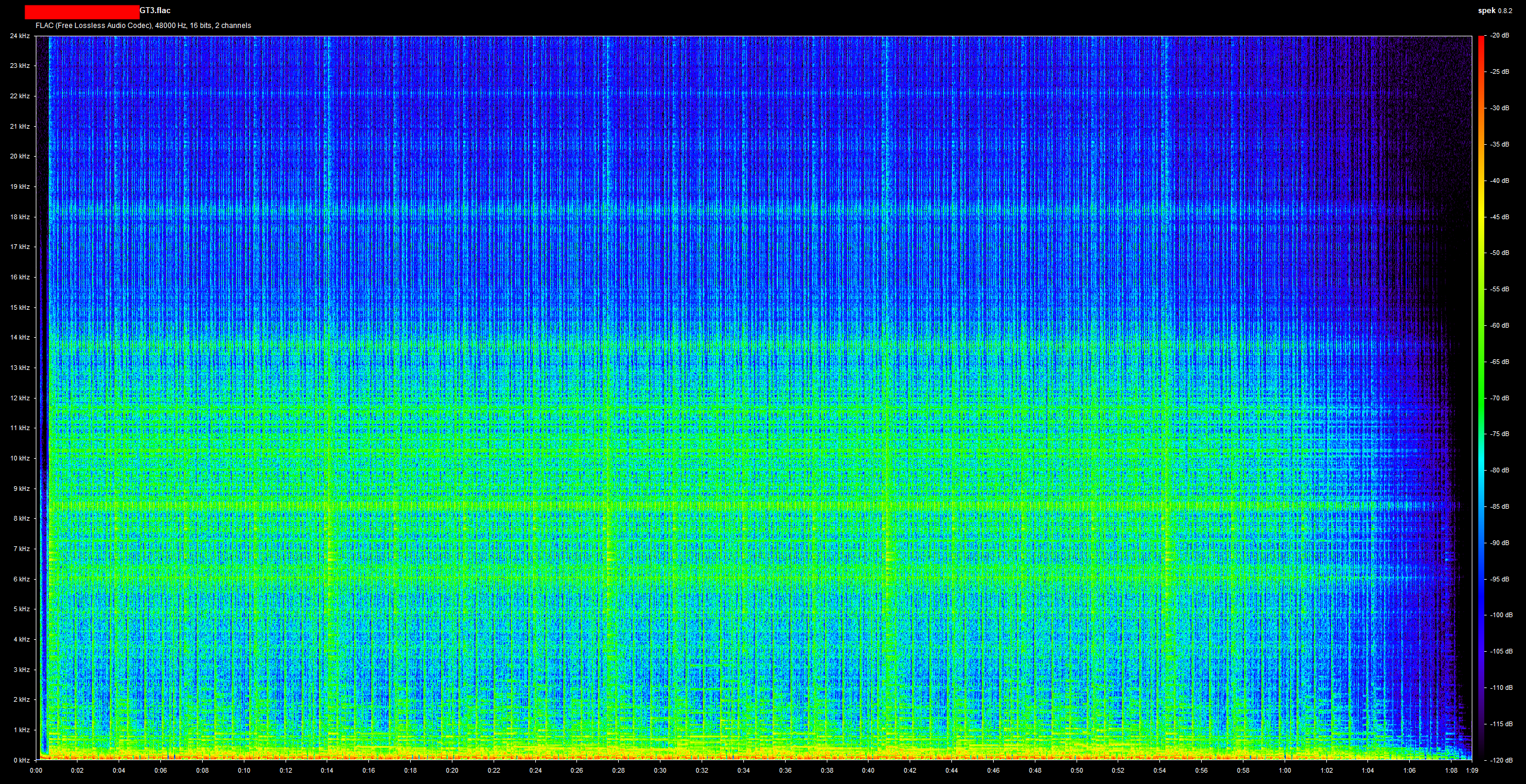 PS2 games can use 44.1khz and 48khz. Again we hit the top of both frequencies but also again, it doesn't mean its lossless due to storage. GT3 uses more music, which means if it was lossless it would use at least 2 Audio CDs (800MB) worth on the 1 Data DVD (4.3GB). 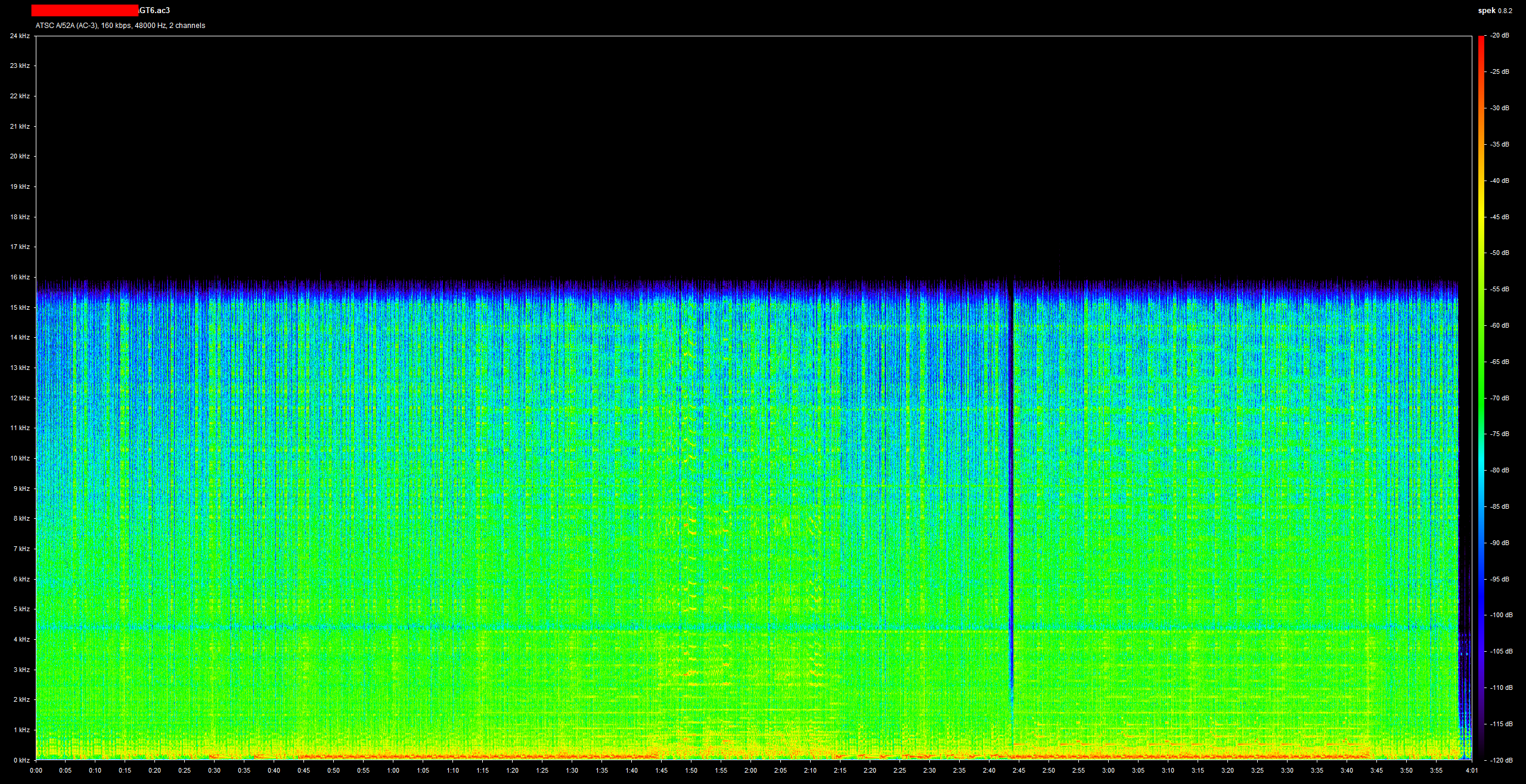 3rd PS console generation in, we get better graphics and worse audio, that doesn't seem right. 48khz but yet we have a cut at 16khz and a 160kbps, what's going on here? Well Polyphony Digital decided to use Dolby Digital this time around again (GT5 also used DD). The only cool part about all of this was if you had a surround system, the PS3 would mix it's songs into a surround mix on-the-fly. PS3 had the advantage of using Blu-ray, which offered 25GB and 50GB discs, so why didn't they use lossless music?

My theory that its a space problem again. They probably would have to use WAV, DTS-HD, or Dolby Digital TrueHD. I can imagine GT6's being originally pretty dynamic and GT6 does feature over 10 hours of music. If we just use the 10 hour time mark (and not estimating song file size) , it would take up 7.5 80-Minute CDs, which is 6GB (WAV). If it used the DTS-HD/DD TrueHD codecs, it would probably be around 3GB to 5GB. If the songs were "pretty dynamic", it would realistically take up to 8GB to 10GB. I think Sony & PD realized that putting about 35GB worth of data on a DL BD-R, would've costed more and that most people can't really tell the difference. Also they probably didn't want to pay more for the newer codecs. Yes FLAC was around but I don't think the PS3 could handle gaming and decoding FLAC at the same time. 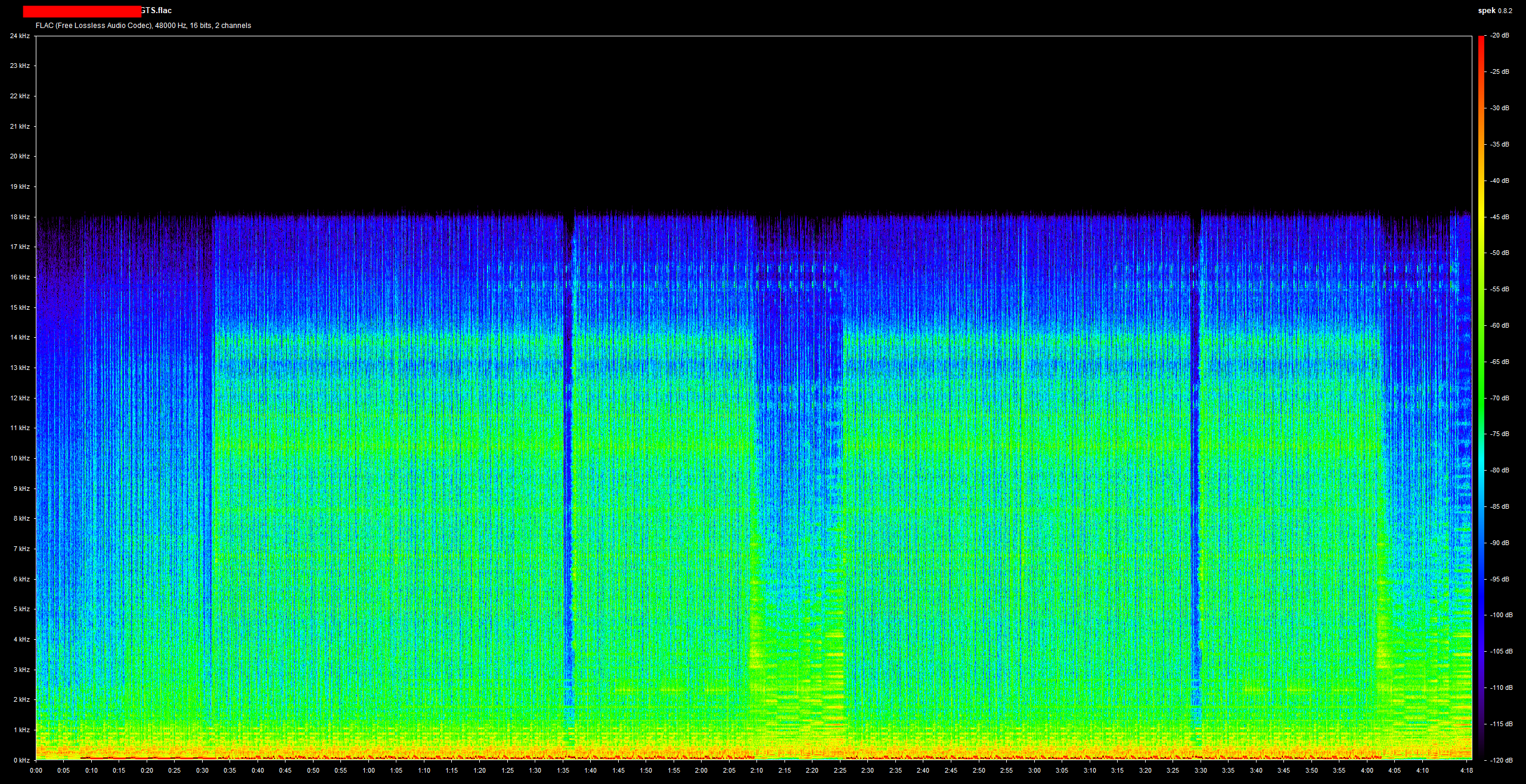 4th PS generation in and we get a slightly better audio. We get 48khz and audio tops at 18khz but its at 192kbps, although this is a different format. This time PD is using ATRAC9, and guess who's owns ATRAC? Sony. I think its strange how they choose 192kbps instead of the max bitrate of 504kbps (Source: https://www.psdevwiki.com/ps4/Snd0.at9)

So why didn't GT Support get lossless audio? I don't really know at this point. Blu-rays disc's are cheaper, PS4 can easily decode FLAC's while gaming, and FLAC is free for commercial use.

Gran Turismo 7:
Would Gran Turismo 7 have lossless audio? Mostly not for both PS4 and PS5. GT7 uses a lot of GT Sport for its building blocks and ATRAC9 (Source:
https://twitter.com/i/web/status/1351291736958623746
). I get that most people can't tell the difference between a MP3 and FLAC but this is ridiculous for an all high-fidelity console. 4K 60fps gaming with audio that's comparable to a DVD movie and the OG Xbox, pathetic. If the ATRAC9 bitrate was pumped to its max, then I can imagine it getting a pass at times. The twitter guy I that I quoted, says "We need to compress sound in the game (like everything) because playing back all uncompressed audio would be too cpu/streaming intensive.". Personally I call BS on that, The PS4's CPU can game and playback FLAC files at the same time, so I can imagine the PS5 doing the same more easily. You can't argue data speed problems because the PS5 has data speeds over 5000MB/sec for uncompressed data and 9000mb/sec for compressed data (versus Base PS4's max speed of 300MB/sec) (Source: https://www.tweaktown.com/news/8287...-ssd-speeds-sony-delivered-5x-that/index.html).

For this GT7 section, I will mention the "CD OST". GT5 was the last game that had a true physical CD release. GT7's "25th Anniversary Edition" which was $20 USD over the "Standard Edition" and it offered more in-game/digital items and a digital soundtrack. Now, there is nothing wrong with digital soundtracks (Unless you like having something physical) because a lot of games come with lossless soundtracks. Well GT7's OST offered only 8 tracks at MP3 quality, no lossless option. Streaming services offer the same album at lossless quality, so GT7 players that payed more, got shafted pretty bad.
Last edited: Apr 26, 2022
Starter Audiophile. Polk Audio enthusiast. 3.0 Setup: Polk S55 (Front), Polk S30 (Center), Sony STR-DN1080. Main setup: ELAC Debut 2.0 B6.2, Yamaha A-S301 (Amp), Topping E30 (DAC). Speaker Wire: MaxBrite OFC 12 Gauge. Lossy Audio powered by Sony DSEE HX. I am Anti-MQA and Anti-Soundbars.
U

Joined just to be able to acknowledge this.

I couldn't figure this out either, it's so bizarre to me. The argument on CPU resources would seem odd as I can't imagine the weight of the usual 22KHz (44.1KHz?) would make much of a difference if at all. How did you figure out that GT Sport uses ATRAC9? I know the tweet is for another game (Warframe) but were you able to confirm this somehow? Is there a program to analyze the raw files from GT Sport?
OP

Unknown said:
Joined just to be able to acknowledge this.

I couldn't figure this out either, it's so bizarre to me. The argument on CPU resources would seem odd as I can't imagine the weight of the usual 22KHz (44.1KHz?) would make much of a difference if at all. How did you figure out that GT Sport uses ATRAC9? I know the tweet is for another game (Warframe) but were you able to confirm this somehow? Is there a program to analyze the raw files from GT Sport?
Click to expand...

I can't give out specific names but there is a program that's able to decode (extract) GT6 to GTS files. GTS music files are in SXD2 and can't be played without its cousin file SXD1. I can say that VGMStream can playback these files. VGMSteam reports these files as "ATRAC9".

ThatM1key said:
I can't give out specific names but there is a program that's able to decode (extract) GT6 to GTS files. GTS music files are in SXD2 and can't be played without its cousin file SXD1. I can say that VGMStream can playback these files. VGMSteam reports these files as "ATRAC9".

The reports are correct since the PS4DevWiki says the PS4/PSVita does support ATRAC9 in games. https://www.psdevwiki.com/ps4/Snd0.at9
Click to expand...

I can't speak to said program as I still don't know which it is but what I can say is that the CPU resources argument for the frequency cutoff seems so specious. The impact would be marginal at best and I can confirm that other games do not follow the same design as I loaded up Astro's Playground and could clearly see data above 18KHz (when analyzing via HMDI capture). The only thing I can think of is that the teams in development are given hard cutoffs for a resource budget and maybe that's why. I'm almost wondering if they do a lower cutoff as it may sound better for particular setups or under specific circumstances?

If you can give me another hint or point me towards something, I'd love to take a closer look, but I do find it perplexing as it's clearly not an isolated incident.

Well damn that was a Cool read. I thought that in games they had a separate audio engine to handle that stuff. but I might be wrong on at least the Early versions of the PS3.
I have to admit, I'm still floored what the PS2 could do with GT-3 and GT4. I'm still in love with GT2. Never really played GT1.

The soundtrack to GT2.. AMAZING!
.
Never give up

Interesting info. I also call bs on lossless and gaming at the same time being too CPU intensive for the consoles. I'd like to be proven wrong, but if my old clunker 2000s laptop could do it years ago, it should be a cake walk for a damn PS5. Maybe they're aiming for some maximum efficiency metric or something, who knows.
Though, I'm glad the devs are trying to do the best they can with lossy codecs. Not as common as you'd think. Very nice to see Opus incorporated on PC. I'm not sure if you're aware, but Opus is much more efficient than MP3. Most blind listening tests, including my own, lead to 128 kbs Opus being even more likely to be transparent than even 320 kbs MP3. Regardless, MP3's direct succesor AAC has had MP3 beat in every way for years, and Opus's predecessor Vorbis even longer.
So, it's a bit sad to such an obsolete format like MP3 persist, but it is what it is.
Last edited: May 27, 2022
Neat audio visualizer: showcqt
You must log in or register to reply here.

Apr 7, 2022
CinDyment
C
R
Any receivers or amplifiers with built in ADC that record?

The Truth About Music Streaming
4 5 6

N
Don't really understand audio in the slightest but looking for advice.